Well, the British managed to turn the tables on the French, and now the Brits are pushing ahead and the French are doing their best to fall back on a hill they hope will anchor their defensive line.  The British are many and pushing hard, the French are few, dispersed, and without a direct route to the hill.  General Dadie is visibly shaken, while General Nickolls is licking his chops. 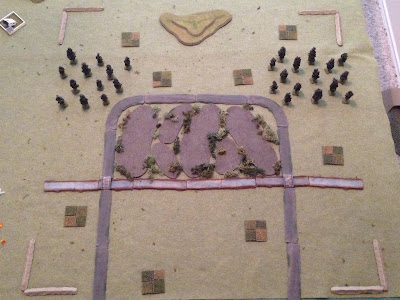 Overview, north is up.  The French will begin the game with all units below the river (lower third of table, running east to west).  The roads are simply decoration, conferring no movement bonus.  At dead center is a large swampy area that is impassable to all troops, as are the two woods on either side of the table.  The hill, Mont Bleu, is at the top of the table and is the victory objective for both sides.  The British will start with all forces off the table, but all units will enter the table via the southern (bottom) edge on Turn 1.

Fifteen turns to see who holds the hill; it may as well have been on Jupiter... 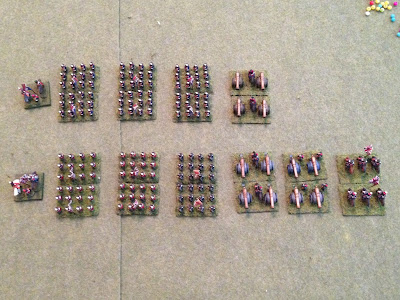 The opposing forces, with French at top and British at bottom.  The French have three infantry brigades (1st, 2nd, and 3rd Ligne, respectively) and a Horse Artillery Battery.  That's right, the French have but four units (and their General).  The British have three infantry brigades (the 1st and 2nd Brigades of Foot, and the 1st Dutch Infantry), a Dutch Foot Artillery Battery, a Royal Horse Artillery Battery, and a brigade of Light Cavalry (a regiment of Hussars and a regiment of Light Dragoons). 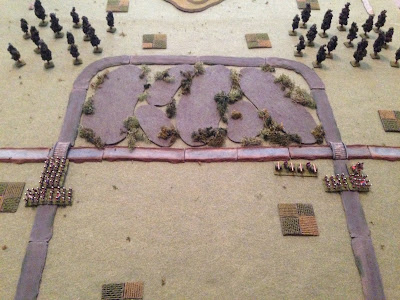 The initial set up: the French 1st Ligne is on the road at left, with the 2nd Ligne behind them.  At right is the French 3rd Ligne and the Horse Artillery Battery, along with General Dadie.  I am violating the principle of concentration of force, but at the same time, I've got to worry about a traffic jam as I've got to get my units over the bridges and to Mont Blue (top center).  Keep in mind, the only unit I have that can fire and move is the Horse Arty; the three infantry brigades can fire OR move. 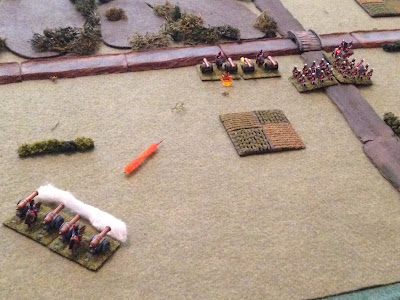 And the fight begins with the Royal Horse Artillery Battery (RHA, bottom left) coming on the table between the two bridges and firing on the French guns, though casualties are light. 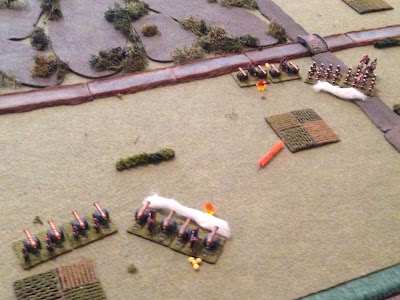 The Dutch Battery (bottom left) comes on next to the RHA, and the French 3rd Ligne (top right) fires a musket volley at the RHA, obtaining four hits. 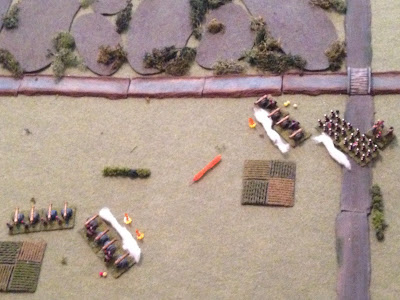 The French guns speak (top center right), also firing on the RHA (bottom center left), but they're aim is terrible and they only get two hits (six total).

I was really hoping to go a long way towards knocking the RHA out in Turn 1... 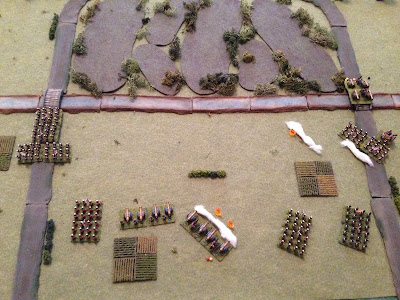 The French Horse Arty then limbers up and falls back to the right-hand bridge.  The Allied infantry come on the table: 1st Foot at left, 2nd Foot and Dutch at right.  And with the 3rd Ligne (far right) engaged to its front by the 2nd Foot and Dutch... 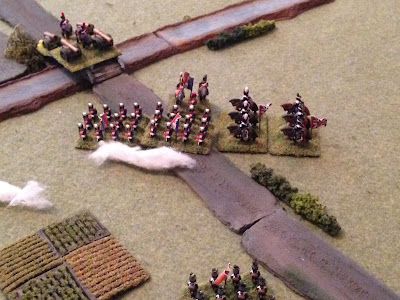 The British Light Cavalry Brigades comes straight on the table at the charge, crashing into the 3rd Ligne's flank!  The casualties are horrendous (10 hits!).  General Dadie rallies them, but only three hits come off. 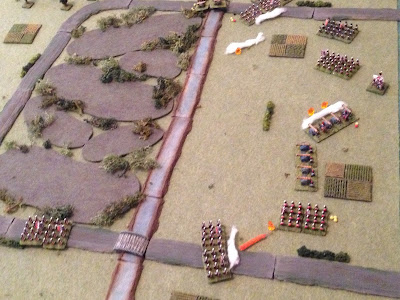 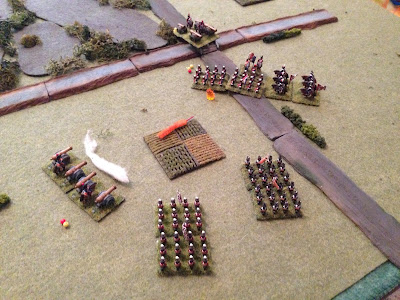 Back on the right, the RHA (bottom left) fires a volley of canister into the the 3rd Ligne's already confused and decimated ranks, and they fold!  General Dadie is unharmed (other than still missing his left arm from fight number 3) and falls back.

Perfect!  Not only am I down to three units now, but the British Lt Cav (top right) are freed up to go after my artillery (top center)... 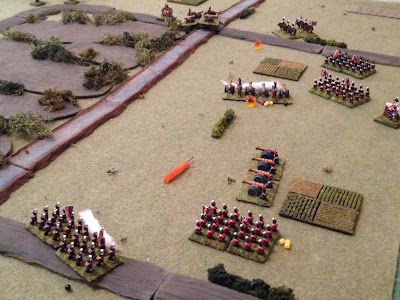 Back on the left (looking west to east, with left-hand bridge just off camera to left), the 1st Ligne (bottom left) fires on the British RHA (center), but manage only two more hits (eight total).  Nice shootin', fellas...

I've taken some big chances trying to finish off the RHA; I want to get rid of them as they are Horse Artillery which can move and fire each turn, which is not good for business if you're trying to run away from the enemy and unable to move and fire yourself.  So I've gone out of my way to knock them out, but my shooting dice have left much to be desired, and now I'm (already) in big trouble. 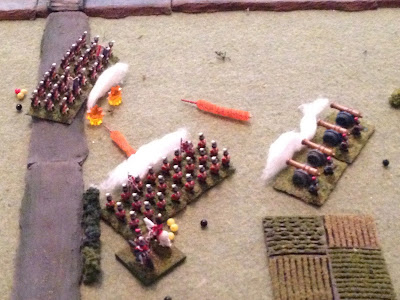 As expected, the Dutch Artillery (right) and the 1st Foot (center) unload canister and musket balls into the 1st Ligne at very close range, under the watchful eye of their General (bottom center).  It could have been worse: they score seven hits. 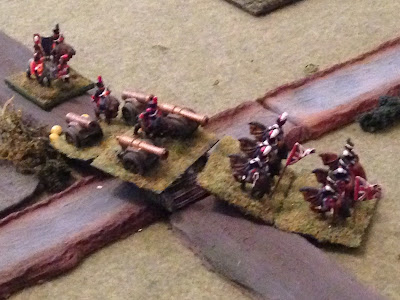 While back on the right, the British Lt Cav charge again, catching the French Horse Battery on the bridge.  The Lt Cav manage a respectable (for light cavalry) four hits, taking the total to seven. 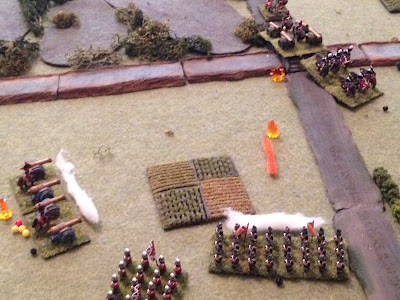 Then the Dutch Infantry (bottom center right) fire on the French Horse Battery, getting four more hits (11 total).  Now, I screwed up; the cav should have backed off six inches when they didn't knock out the arty.

Personally, I would have had the infantry fire on the guns before I charged with the cav, but the boy wanted to get the cav into the guns before the guns had an opportunity to fire. 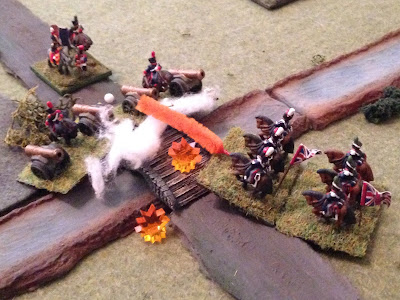 The French artillery fires off a half-ass volley of canister, scoring only four hits (keep in mind, canister gets D6 x2 hits)... 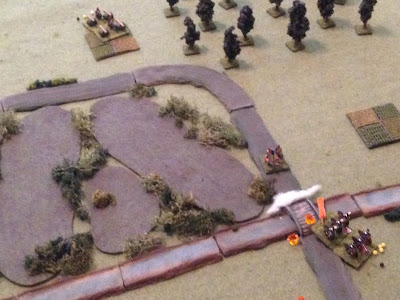 And then the French artillery falls back (top center left, with French General at center right, just above the British Light Cavalry). 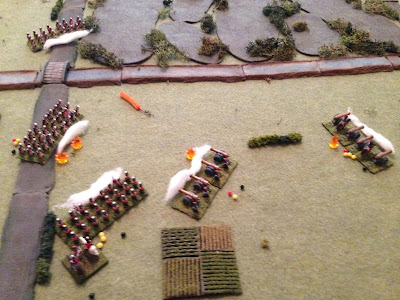 I really want to kill the RHA (far right), but they are just out of range.  So the 2nd Ligne (top left, with 1st Ligne below them) fires on the Dutch battery (center), scoring six hits.

Just realized I screwed up again: I'd used 1st Ligne (far left) to fire on the RHA (far right) earlier in this, the 2nd turn.  But the rules for the scenario state all French units south of the bridges at the end of Turn 2 are automatically eliminated.  So, I got away with one there; it wouldn't matter... 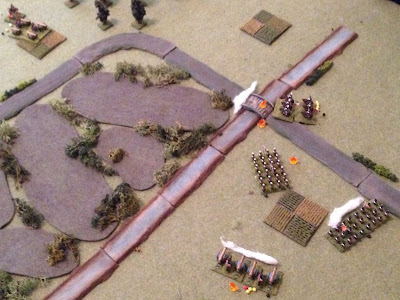 The French General falls back to his Horse Artillery (top left) as the 2nd Foot (center right, between Lt Cav, Dutch Infantry, and RHA) move on the right-hand bridge. 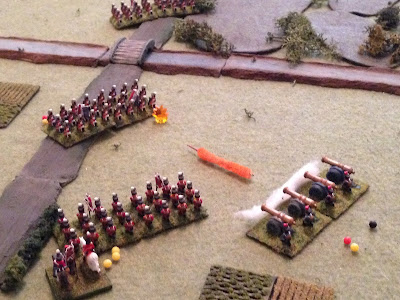 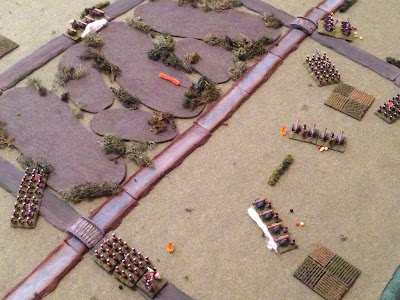 And then the British General leads 1st Foot towards the left-hand bridge (bottom left, with 2nd Ligne staring across the bridge at them).  The French artillery (top left) again targets the British Royal Horse Artillery (center right), scoring... zero hits.

So, I can't shoot worth crap today, I'm down to only two units, and then I forgot to have my arty fall back to the hill, leaving them too close to the British Light Cavalry... 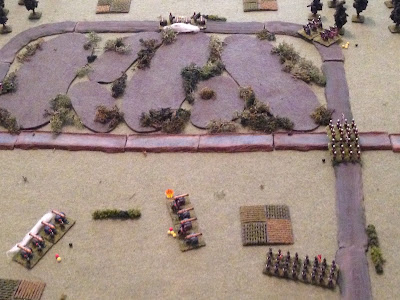 The British cavalry push ahead (top right, near my artillery at top center), while the 2nd Foot move to the right-hand bridge (far right). 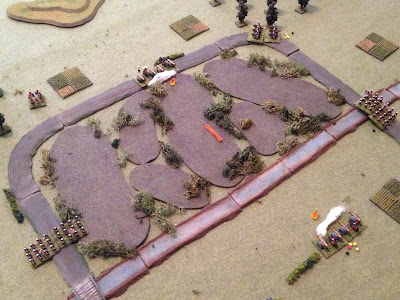 General Dadie continues his gallop (top left) to link up and support the 2nd Ligne (bottom left), while the British arty (bottom right) fires on the French arty (top center), scoring a few more hits (12 total, on the brink of elimination). 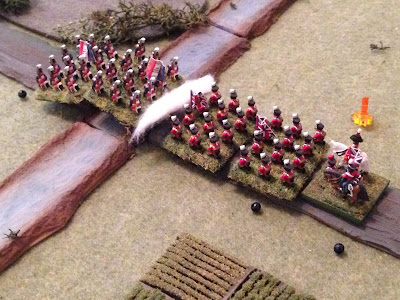 The remaining French brigadier says hell with it, I'm not waiting on the General, and charges back onto the left-hand bridge and into melee with the British 1st Brigade of Foot, supported by their General.  The French do very well, scoring eight hits. 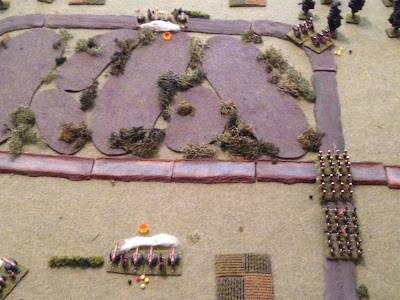 Turn 3 ends with the Dutch Infantry moving onto the road to the right-hand bridge, behind 2nd Foot (far right). 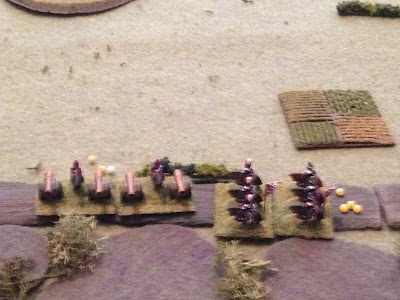 And Turn 4 begins with the British Light Cavalry running down the French artillery...

Down to one unit, the 2nd Ligne, and they are actually cut off from Mont Bleu.  The  hill is off camera to top center, while my infantry are off camera (a long way) to bottom left. 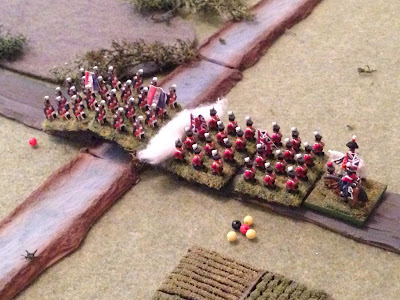 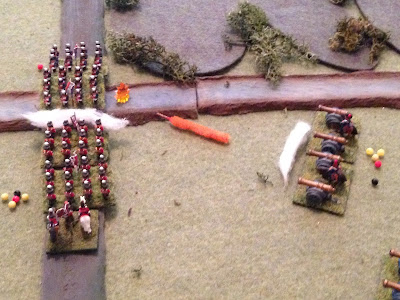 And then the British RHA gunners roll up (bottom right) and pour canister into the flank of 2nd Ligne (top left), shattering them (12 hits, using canister and flank bonus). 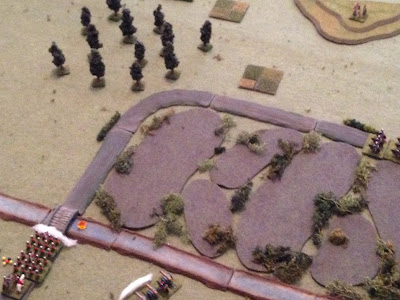 Ugh...  This one was so bad I almost didn't even post it.  But I did, gotta give the boy his due.  He took me to the woodshed and left me there, not even close.  He didn't even lose a single unit!!!  I don't blame the scenario; I just had 1) some bad luck with card activation combined with 2) some really poor firing dice combined with 3) a few poor command decisions.  He's having a great time, and I want retribution, though I'm not sure if it will happen this weekend.  We've got a tournament starting Thursday evening, so if things go well it will take up our entire weekend.  If we don't do so well, I'll have plenty of time for gaming.

More to come!  I've got a pretty cool looking WWII skirmish game to post yet.