Battlefront US Airborne Rifle Platoon for the Mediterranean

So I teased you the other day with my new project, and so here's the whole force I've prepared (so far at least).  And we finally got some sunshine, so I was able to get some better photos.  I picked up Battlefront's 15mm US Airborne Rifle Platoon, and that's what I'm using, even though these are straight-legged infantry.

If you're not familiar with the concept, "Sgt Rock" was a comic book that ran in the US from the 1950s to 1980s.  It, along with "GI Combat" and my personal favorite, "Fightin' Marines," were staples of my limited childhood reading.  The comic book had as its main character Sergeant Frank Rock, a bona fide tough guy, and every issue saw him leading the "combat happy Joes of Easy Company" into ferocious firefights against the Germans.  Of course, Easy Company wasn't really a company; every now and again you'd see some vague officer always identified as "The Skipper," despite the fact he was clearly a different guy each time (they usually died), and you really don't see any Lieutenants (who would be platoon commanders) or other NCOs above the rank of Corporal.  But they fought with an eclectic mix of individuals, including a Native American and an African American.  They were always hard pressed, fighting in North Africa, Sicily, Italy, Normandy, and beyond, always outnumbered, almost always getting pounded by "Kraut" mortars, and usually having to take out a Tiger with a bazooka or hand grenades through open hatches.

So my plan is to play out a series of small, ferocious, and quick comic-book battles spanning the entire war, from Tunisia to Sicily to Italy to Normandy to Belgium (maybe Huertgen?) to Germany, and doing it on a very small (12" x 12") table with between 6 and 16 troops each, maybe even a vehicle every now and again.  The small, 'no maneuver just kill' idea was got from Mark at the "Winter of '79" blog, specifically his idea of 'pizza base gaming' AKA 'pizza base Schweerpunkt.'  Nothing too fancy here, just the idea of getting playing small fast games in which the scenario starts as the first shots are fired, as opposed to the traditional 'your forces enter the table here, his there,' and the two maneuver towards each other then start the firefight.  The best example is this: instead of setting the opposing forces on the board and one walks into the ambush and the shooting starts. you play on a small table and the the game starts with one unit in ambush position and the other standing in the kill zone, first shot has been fired and both sides are alert.  I'll be playing these out with Ivan's "5 Men at Kursk."

But let's get to the troops. 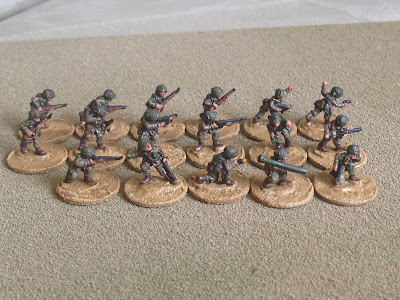 The whole force, 17 troops individually based for starting out in North Africa.

Another note on Sgt Rock: there are a lot of named characters in the comic, and a lot of them were killed in action.  There were also nameless, faceless troops that usually died.  So, right up front I want you to know that I'll be doing a certain amount of cheating; not in winning or losing the fight, but in trying to not get the characters killed.  It's the law of averages, these guys ain't gonna make it through a hundred fights, but I want to keep them around as long as I can.  Another thing is, some of the named characters are very distinctive looking (the Native American soldier wears feathers on his helmet), while some of the named characters are nondescript, i.e., they are average white guys with green uniforms, a green helmet, and an M-1 rifle.  I'm not sure yet how I'm going to handle them, but I'll point out the distinguishable ones. 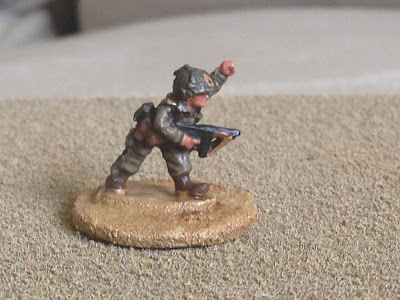 First up is Sgt Frank Rock, with his distinctive chevron on the front of his helmet.  He also wore machine gun belts over both shoulders; if you look closely you can see I tried to paint these on. 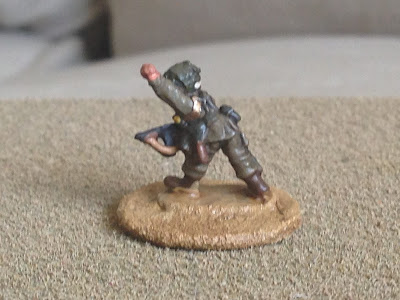 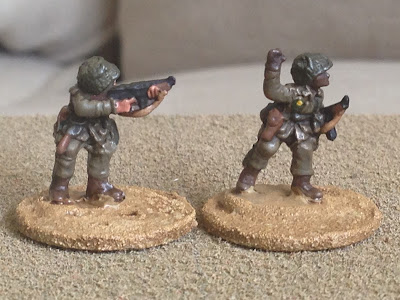 At left is just another troop, while at right is Jackie Johnson, the African American soldier.  I don't know why I gave him a Tommy Gun, he carried an M-1 in the comic.  I just like Tommy Guns I guess... 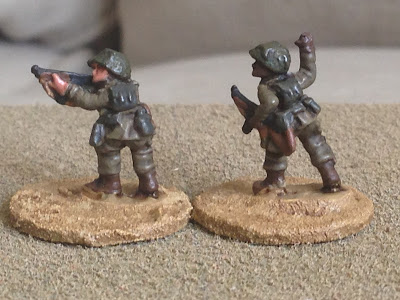 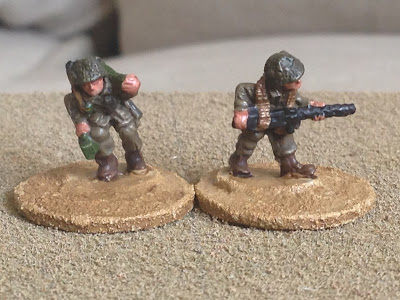 At left is the assistant machine gunner, and at right is "Bulldozer," who not only carried his machine gun that way, that's how he fired it, too.  Part of why I chose the Battlefront pack was because they had this pose, though I want to do some actual paratroopers for another campaign (my old "All Americans" campaign), so I really need a single prone, Airborne MG crew (I'll be damned if I'm going to pay $20 and get eight teams when I only need one). 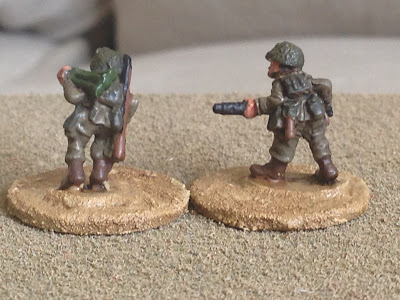 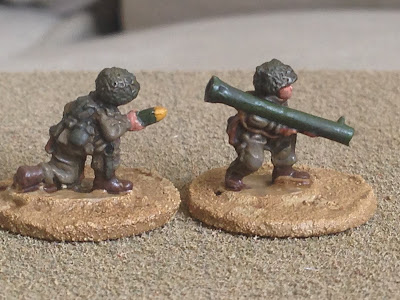 The bazooka team, which is Short Round (left) and Long Round (right). 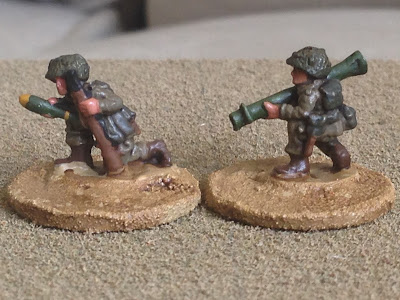 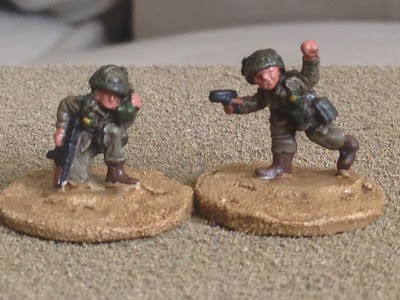 At left is another nameless guy, but at right is The Skipper. 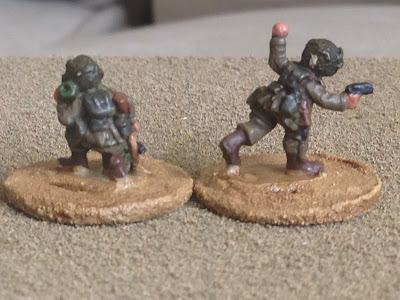 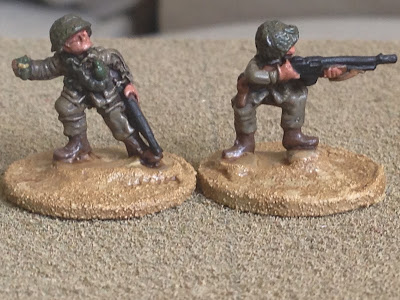 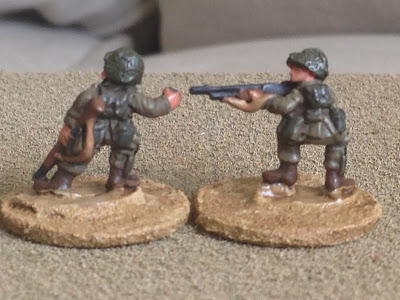 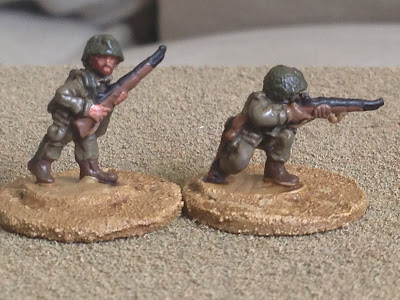 Two named characters: at left is "Wildman," with his distinctive red beard and mustache, and at right is the Native American, "Little Sure Shot." 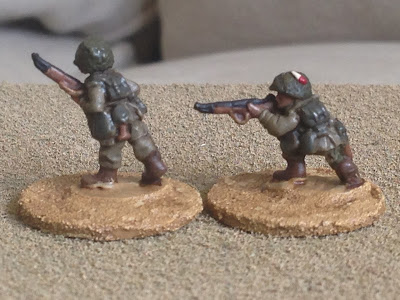 Reverse, where you can see I painted a strip of camouflage as a feather. 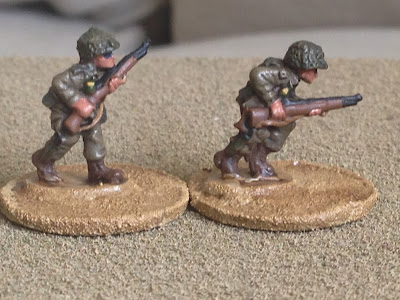 At left is the named soldier "Four Eyes," the best shot in Easy Company, while at right is a nameless rifleman.  I tried to paint glasses on Four Eyes so he would stand out. 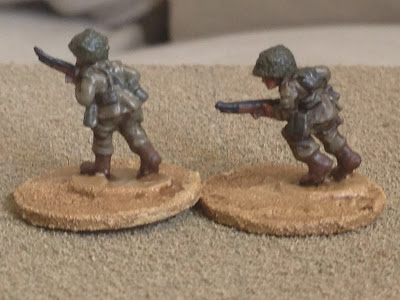 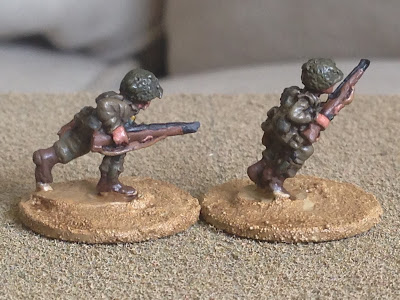 Two more nameless (and here, faceless) riflemen.  I really like the poses. 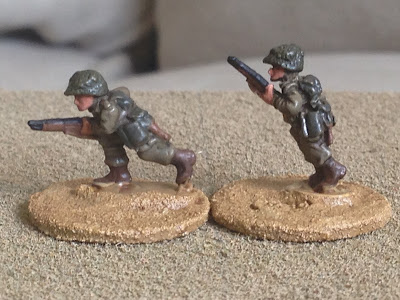