UPDATE: EVERYTHING IS SOLD, THANKS TO STEVE AND BEN!

Once again I find myself with some spare 15mm WWII stuff to sell off.  Don't ask ;)
I will ship anywhere in the world at cost, and I'm putting in the shipping price for US flat-rate shipping for each set.  Everything will be sold on a first-come, first serve basis, and I'd prefer to do it via PayPal (my address is bigjackmac (at) hotmail (dot) com).  Also, regarding Paypal, I've already added a couple bucks onto each price to cover the PayPal fee, so please choose the "I'm purchasing goods option."  If we can get this done quick I can have them in the mail on Monday.  It's easiest if you contact me via email (address two lines above). 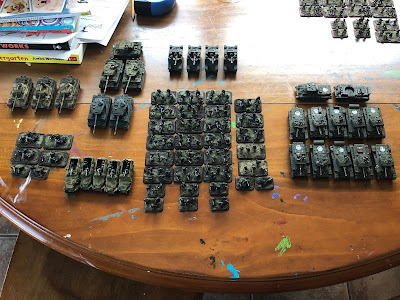 SOLD-Here's the whole mess, some British and German stuff, all 15mm WWII stuff from Battlefront and Plastic Soldier Company.  Ignore that stuff at top right, it's mine, I'm keeping it! ;) 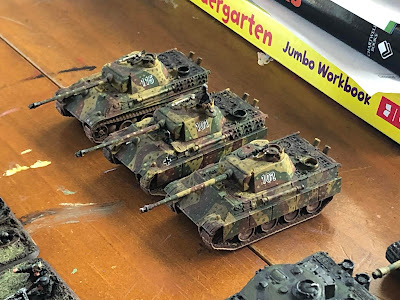 SOLD-First up is three Panthers in a beautiful ambush-pattern camo.  These are plastic models from PSC.  Price is $22 plus $7.90 for small flat-rate shipping box ($29.90 total). 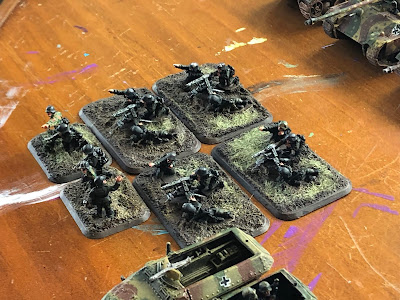 SOLD-This is a German machine gun platoon.  These are Battlefront metals and consist of four MGs and two command stands.  Price is $14 plus $7.90 for a small flat-rate shipping box ($21.90 total). 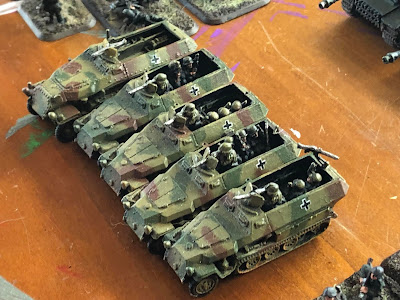 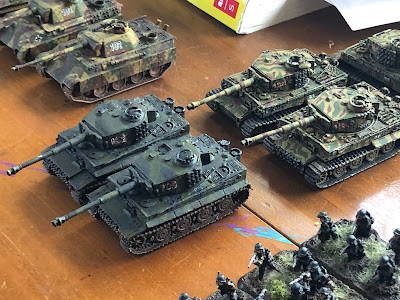 SOLD-This is a German Tiger I platoon.  These are metals from Battlefront, with two painted in a gray/green camo and two painted in dunkelgelb tri-color camo.  The one at top center has a hatch open but is missing the crew figure, and I'm actually including another dunkelgelb tri-color Tiger (just visible at top right) for free, because it's missing it's gun barrel.   Price is $27 plus $7.90 for small flat-rate shipping box ($34.90 total). 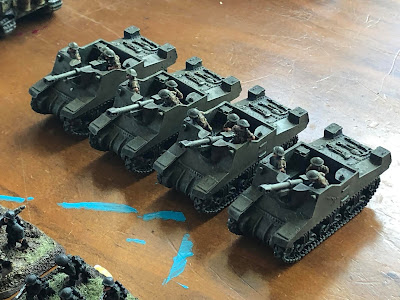 SOLD-Here is a British self-propelled artillery platoon, consisting of four metal Sextons from Battlefront.  Price is $22 plus $7.90 for small flat-rate shipping box ($29.90 total). 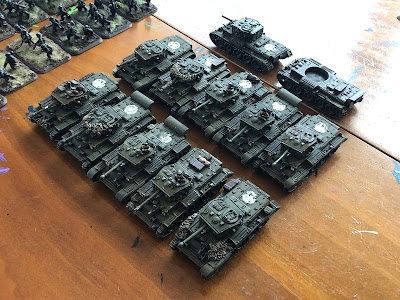 SOLD-Here is a British tank company consisting of ten Cromwells.  These are metals from Battlefront, and I'm including an extra two for free, because one is missing the muzzle break on its cannon, and the other is missing a turret (the two at top right).  Price is $32 plus $12.80 for small flat-rate shipping box ($44.80 total). SOLD-And last up is a German infantry company.  These are metal models from Battlefront, consisting of three platoons, each with six infantry bases and two command bases.  I will sell as separate platoons, but if you buy the entire company you get the extras, which amount to: two Panzerschreck stands (large bases with two teams per stand), two more infantry stands, an anti-tank rifle stand (has three ATRs and a rifleman on it), a small-base 50mm mortar stand, and a small-base command stand.

Will entertain trades for:

Well, there it is.  Thanks for looking, and if there are any questions, please let me know.