First, let me apologize for my extended absence.  I've had a lot going on: a few business trips, lots going on at work when I'm back in the office, Little League baseball practice and games which happen about four times a week, and somewhere in there I managed to hurt my back bad enough to cause me to miss a week of work.  So, I apologize for not posting, but I'm back, and I played a couple games this past weekend and so I've got about a dozen blog posts to catch up on with showing you new troops, new terrain, and the batreps.  I'm looking to get them out as quick as possible, hopefully about one a night until I'm caught up.

So first up, I've started a new 15mm WWII skirmish project,  It will on very small tables with very quick and violent rules, and will be very Hollywood-ish.  But Hollywood-ish for good reason; this whole project is based on a bit of pop culture from my youth, and I want to see if any of you can figure it out.  It's Yanks vs. Germans in its entirety, and it will start in North Africa and go all the way through to VE-Day.  I can't tell you anymore than that for fear of giving it away, but below are some pics that should do it for you.

I'm not showing the entire unit, just the named characters that I could paint up on a 15mm troop to where they would be recognizable from the original media.  These guys are regular, 'straight-leg' infantry GIs, though I used Battlefront's 15mm Airborne Rifle Platoon for this project (honestly, that's just because they were the 15mm US troops of any sort that I could lay hands on the quickest; I wanted to use Peter Pig regular US infantry, but Brookhurst was out of stock, then I wanted to use Battlefront regular US infantry, but couldn't find them at the FLGS or online), painted up in olive green to match the original media.

So, take a look at the below pics and see if you can figure out what this WWII project is based on.  For connoisseurs, bonus point to the guy(s) that can identify each one of these characters. 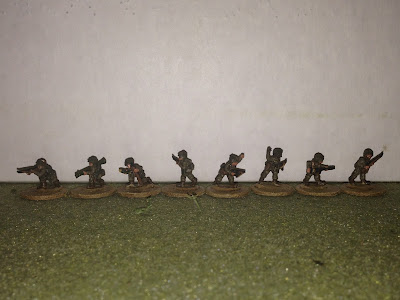 The eight guys I could paint up with distinguishing marks to identify them as characters from the media; scratch that, two of them are in there just because of their weapons, so keep that in mind also.

Oh, and I apologize for the garish light in the pics.  Another issue with posting photos of my new troops has been light; the weather here has been overcast for pretty much the last three weeks (though not raining much). 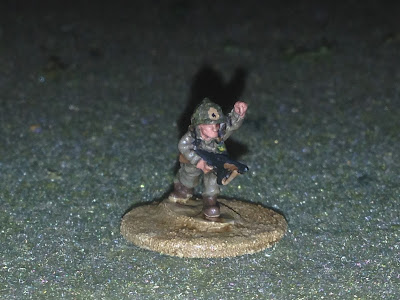 Our first troop, their erstwhile leader. 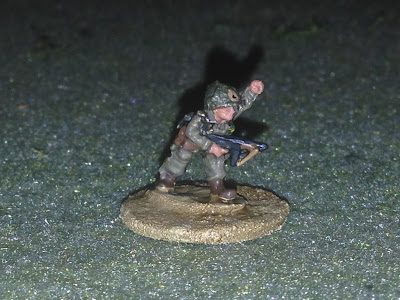 Another look at the leader. 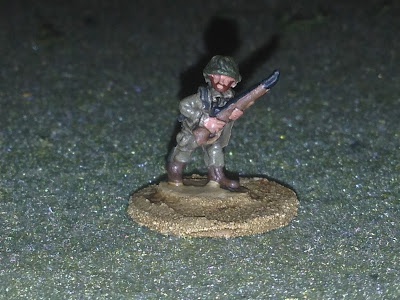 Number two trooper.  Gotta look close as his mug for the hint. 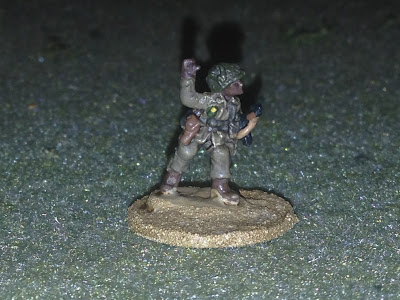 Number three troop, should be very distinguishable, though his weapon isn't right. 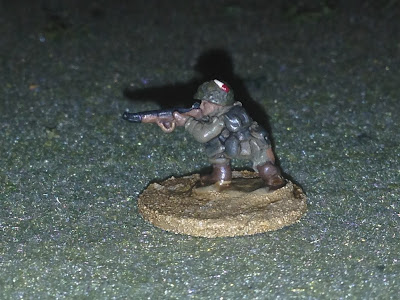 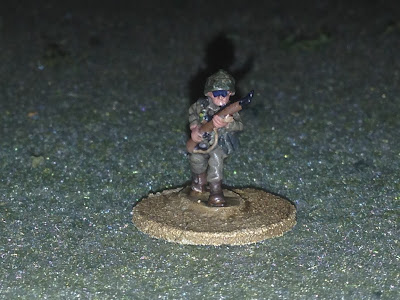 Number five trooper, another guy whom you need to scope out his mug.  Yeah, it looks kinda goofy, but I wanted to show, and that's the only way I could... 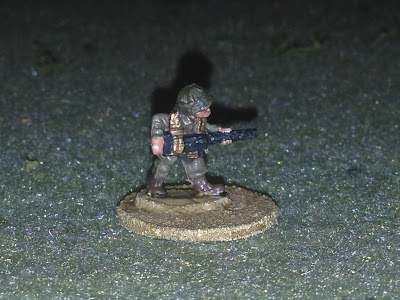 Number six trooper, distinguishable by the weapon and the manner in which he's using it, 'cause in the media he didn't just carry it that way, he fired it that way too.  I'll also point out that, in the media, he started the war with a BAR and then transitioned to a Browning machine gun (actually the M1919A6, not the M1919A4). 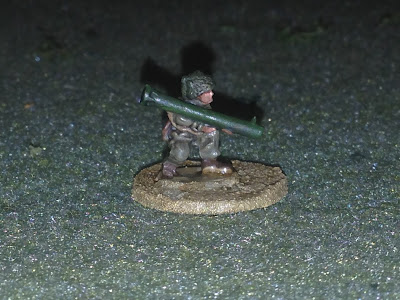 Trooper number seven, distinguishable by his weapon.  Another hint: in the media, he wasn't the first guy to carry this weapon, the original bazooka man was KIA.  But I'm going with the second bazooka man in the media so I... 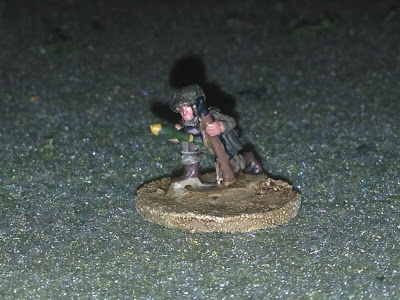 Can have his partner as well, trooper number eight.  In the media the two bazooka team members had very similar nicknames.

Well, that's it for now, hopefully only until tomorrow night when I can make my next blogpost.  We'll see if it's some terrain I've been working on or another set of troops.  The two batreps aren't ready yet, I've got a bunch of typing to do, but they're coming.  As a teaser for those, one is a French vs British Napoleonic fight using Neil Thomas' One Hour Wargames, the other the first fight of this project using Ivan's 5 Men at Kursk.  So stay tuned!