Several weeks ago I was hanging around over on The Wargames Website, perusing new topics, and one popped up that caught my eye: https://www.thewargameswebsite.com/forums/topic/tiny-air-combat/ 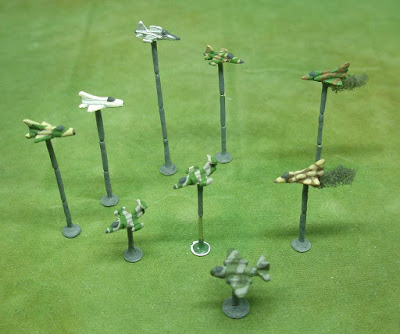 There was this crazy cat that goes by "Thomaston" over there posting some super cool pictures.  He had these tiny little aircraft (I'd guesstimate them to be about 1/1250, roughly).  I couldn't stop staring, and just had to get me some.  I reached out to Thomaston, turns out he designs them himself and gets them professionally 3D printed.  I begged and whined a lot and, lo and behold, he was kind enough to make some available for me via Shapeways (whose customer service has been absolutely fantastic, by the way).  And when I say he was kind enough to make some available, I mean he's been amazing.  I thought up some crazy projects I wanted to do, asked him if he could support, and he went out and designed them and hung them on Shapeways, exactly what I wanted, customized for what I was looking for.  I did a test order, got'em, and loved the look, so I quickly did two more orders.  I primed some but couldn't figure out a basing scheme.  I figured out a basing scheme and painted some up, now I need some more (bases and planes)!  Mine do not look anywhere near as pretty as his do, but I figured I'd share what I'd finished so far. 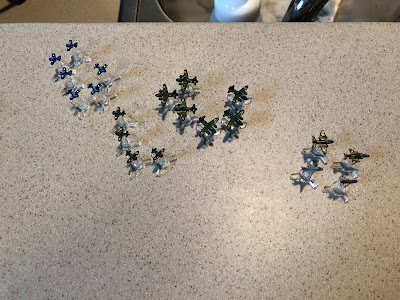 So here is what I've got ready so far; not a lot, but enough to play some WWII games, and a few testers for modern aircraft.  Here's what you're looking at: six US Navy/Marine Corps F4F Wildcats, four A6M Zeroes, six G4M Bettys, one F-4 Phantom, one B-57 Canberra, one MiG-21 Fishbed, and one Su-22 Fitter.  I've got plenty more modern aircraft waiting in the wings (for their bases to get here), and a few more WWII aircraft, but I need to hit Thoamston up for some more WWII, mostly Imperial Japanese Navy. 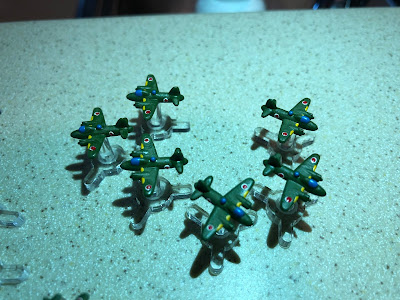 First up, my six G4M Bettys.  Plain green, some yellow leading edges, red on white national insignia on each wing and the fuselage, and bright blue glass on the cockpits and dorsal turrets. 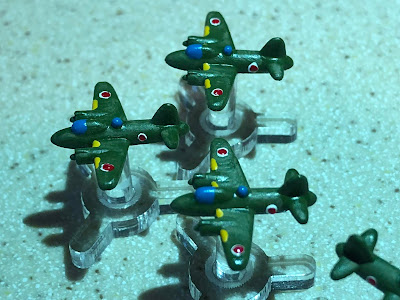 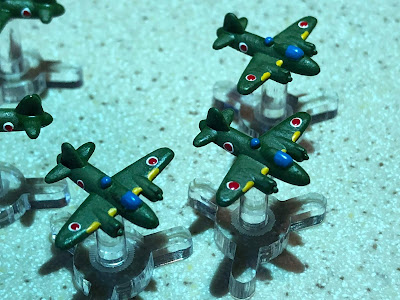 And southeast.  The flight stands are from Litko; they have a 1" flight peg that I cut down to 1/2 inch, gives me just the look I was going for. 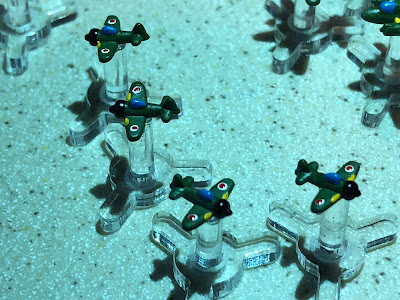 Next up, four Imperial Japanese Army A6M Zeroes, painted the same as the bombers, except these have black nacelles. 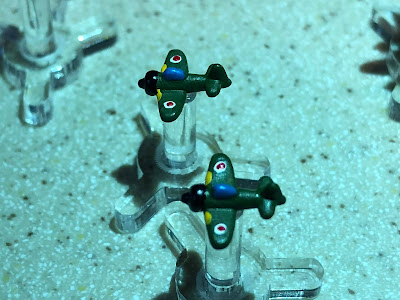 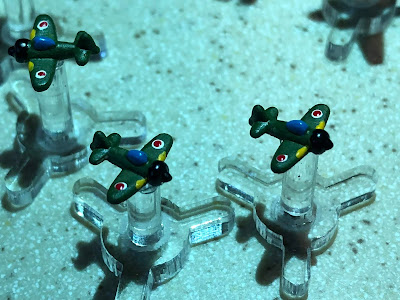 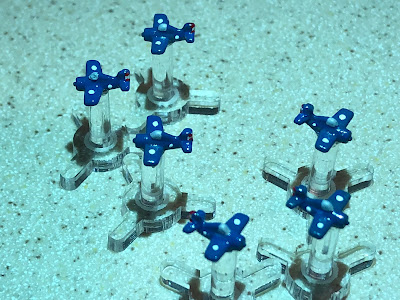 The six F4F Wildcats, which will serve as both US Navy and US Marine aircraft.  These are French Blue, with white insignia on each wing and the fuselage, red and white aileron, and light gray cockpits.  I kinda wish I'd have gone lighter, brighter blue, like the color I used on the Japanese cockpits, but this will do. 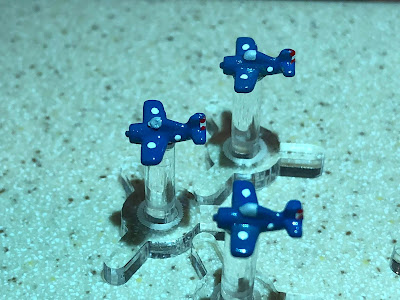 A close up of three Wildcats heading west.  I know the US didn't use Vics, but the rules I'm going to use have you rolling for what shows up to the fight and it's either in pairs or threes. 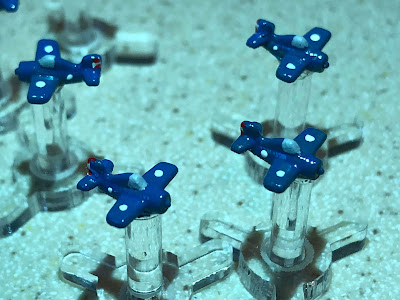 And three heading southeast.  On to the moderns! 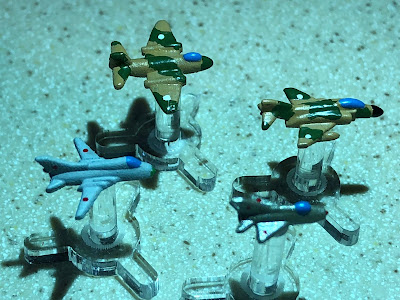 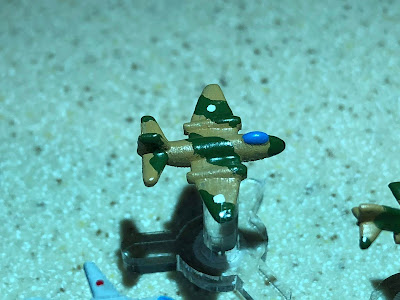 The B-57 Canberra in a tan and green camouflage, white insignias on the wings, blue cockpit, and a black nose cone. 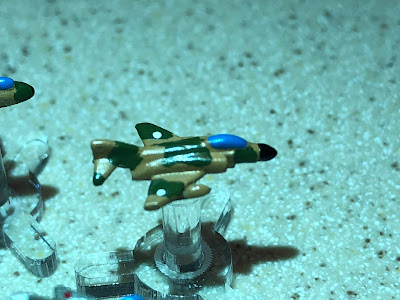 The F-4 Phantom is painted up the same way. 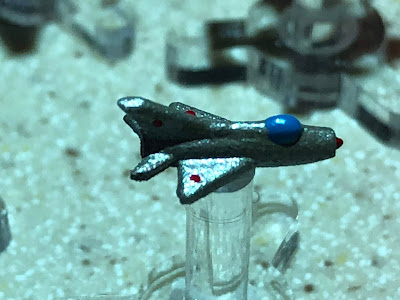 The MiG-21 in bare metal (I used 'steel'), with red insignia on the tail and each wing, a red nose cone, and a blue cockpit. 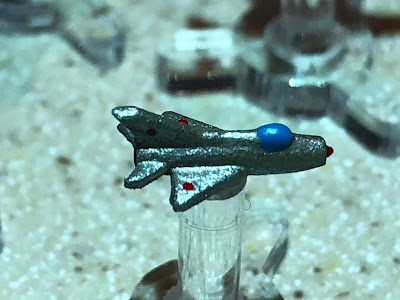 Another look at the MiG-21, trying to get the shadow off. 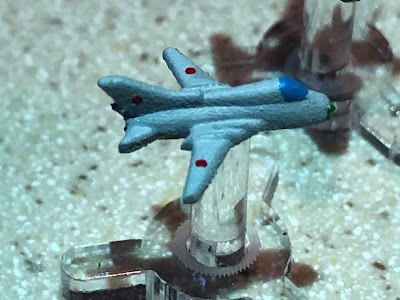 And the Su-22 Fitter, in light gray, red insignia on the tail and each wing, blue cockpit, and green nosecone.  My Su-22s will mostly serve as ground attack aircraft, otherwise they'll be getting shot down by F-14s (as in the Gulf of Sidra back in the 80s). 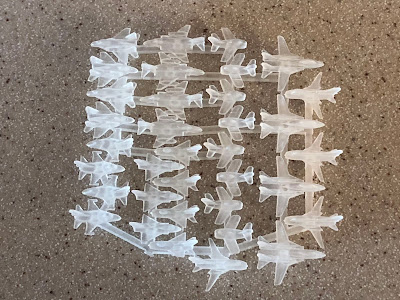 Just for kicks, here's what they look like when you get them in the mail from Shapeways. 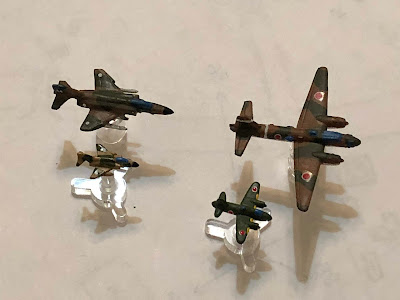 So I'm waiting on more bases from Litko, I need to order more aircraft from Thomaston (if he's still willing to put up with me, which I say facetiously as he's been nothing but gracious, I just hope I'm not imposing), and then I need to get them all painted and based.  However, I have what I need to play my first fights, so keep your eyes peeled, action imminent!  Along those lines, I also played two more 10mm fights with Squad Hammer this weekend, continuing my campaign in the fictional African of "South Leon" for my "Cuba Libre" blog (https://cubalibrewargame.blogspot.com/), I'm working on the batreps, and these WWII Pacific aircraft will soon be in action over on my WWII Pacific blog (https://oldleadbreed.blogspot.com/).