The past three weeks (including this one) have been a wargaming desert, just too much family stuff going on, so I have gotten zero games in, but I have gotten some painting done, and even knocked out a pretty ambitious project (two weeks from start to finish!).  If you're so inclined, and if you're reading this I assume you are, let's have a look.

First up, I've had a hankering to do some simple American Civil War gaming.  It's true that I already have some ACW stuff, but it's crap, no other way to explain it.  It was one of the very first wargaming projects I ever did: I ordered some 10mm command, infantry, cavalry, and guns from GHQ.  Nice figures, but expensive and don't fit with anyone else's stuff.  I didn't know much about rules or basing, screwed both up multiple times, only ever actually played one game, with my late father.  At the time I was apparently into ridiculous levels of battlefield friction and so I played some set I got from a buddy, something I'd never heard of before and haven't heard of since.  To make a long story short, the Old Man and I sat around an 8' x 6' table very sparsely populated with my half-assed painted and based troops, and watched them do very little for the next six hours.  You had to roll every time you issued orders, and there were a lot of failed orders, and lots of blunders that had regiments marching to and fro, everywhere but where you told them to go.

So ACW lay dead in my house for about six years, then I found a solution: the boardgame "Battlecry! 150th Anniversary Edition".  I looked at it online for about three weeks, not really wanting to drop $150 on the game and shipping, but then, on a lark, fortune smile on me.  The family and I were out having lunch with my mother in a part of town we don't often find ourselves in, and after lunch I spied a nearby "Hobbytown USA" I'd never been in before.  The ladies waited in the car as the boys and I strolled in, and BAM, there it was, a copy of Battlecry, for SIXTY BUCKS!  I took it home, cleaned up the minis, primed them, and got to work.  They're not beautiful, definitely not my best work: I gave them simple block paintjobs, then I finally tried the vaunted "Dip" method, with very mixed results, then I matt sprayed them and it frosted some.  Lastly, and this is my only complaint about the game/minis, I put the flags on, and they are absolute crap!  The next day I had to spend a couple hours supergluing them back on...  In any case, I present to you my setup for Battlecry (and already scheming about replacing the plastic minis with 10mm Old Glory troops from Connie and Russ). 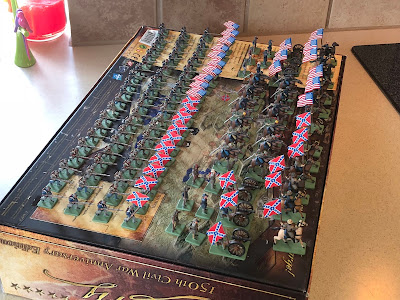 The whole setup. I was gonna say Federals at top and Confederates at bottom, but you've probably already worked that out ;)  Each side has three Generals, three cavalry units (three mounted troopers each), three artillery batteries (three men and a gun each), and ten infantry units (four men each).  I say cavalry and infantry units because the scenarios for the game, of which 30 (30!) are included, move freely between regiments and brigades for different battles. 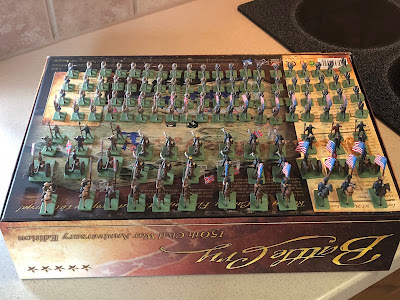 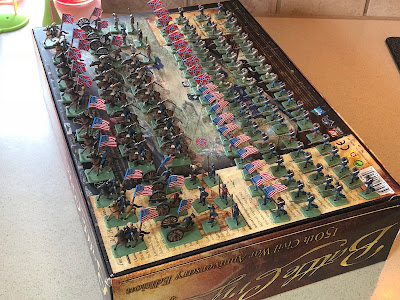 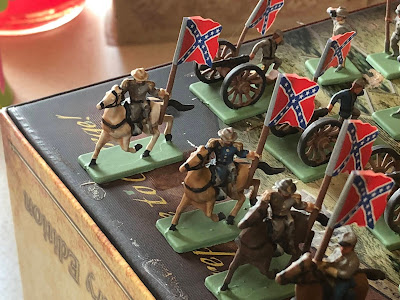 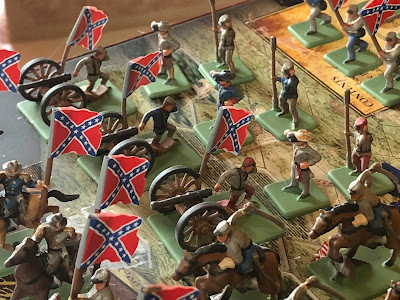 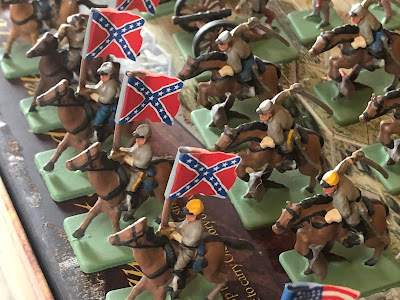 Confederate cavalry.  Here you get a look at the fact that I went with straight gray for most Confederate uniforms (and blue for the Union), then tried to add little embellishments, such as a different colored kepi, different colored trousers, a trouser stripe, a patch on top of the kepi, etc..., to add a bit of individuality to the different units. 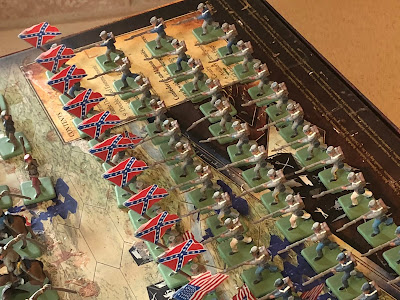 And the rebel infantry. 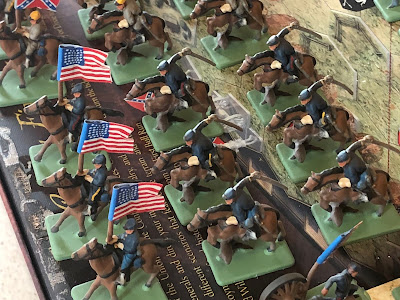 Now on to the Union troops, looking at the cavalry. 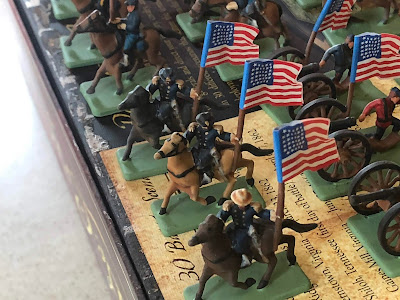 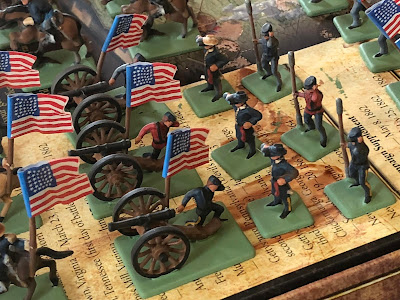 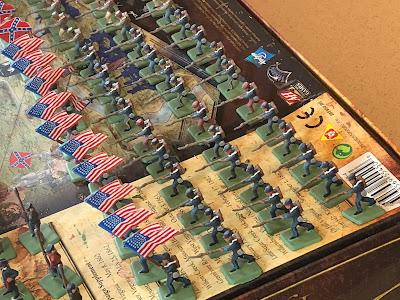 And Union infantry.  While I haven't gotten any 'proper' wargames in, we are playing several games of Battlecry this weekend, I'll see if I can post some pics/simple batreps.

Okay, so I actually finished another, smaller, project as well.  Long-time followers of the blog know I'm not really into Sci-Fi stuff; the one caveat to the at would be Star Wars stuff, but I've never figured out a compelling, fun way to play games with heroes that you know are not going to die in a game.  I.e., in A New Hope, The Empire Strikes Back, and Return of the Jedi, you knew Luke, Leia, Han, and Chewie weren't going to die, and since you know they can't die, it kinda makes it hard for them to lose, and fun games aren't made from scenarios where one side cannot lose (in my opinion).

In any case, please forgive my divergent rant: just because I don't like Sci-Fi stuff doesn't mean my boys don't.  So as I was sauntering through Hobbytown USA with my big box of Battlecry, something caught the boys' eye... 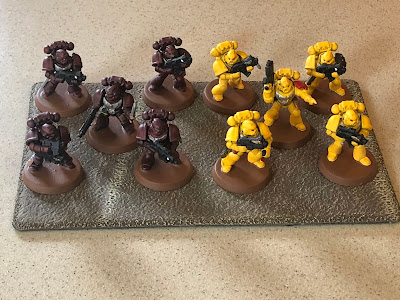 I really don't know what I'm doing with this stuff, or even what I'm supposed to do.  The boys spotted some plastic Space Marines and so I bought them and painted them up.  I know, pretty weird and pretty weak paint jobs.  I gotta tell ya: at first I was getting into it, came up with all kind of cool paintjob ideas.  Hell, I was going to give each of the ten dudes different, unique paintjobs, but that quickly went out the window.  As I sat down to get into it I quickly learned, I get no joy from painting these guys.  After priming them black I tried several different schemes, then finally just went and bought some yellow and burgundy paint and did the minimalist crap you see here.  I had real problems painting such vast expanses of plastic; I'm used to painting 3, 6, 10, and 15mm troops, and it probably sounds funny to you guys, but the pure volume of trying to cover one of these things with paint was aggravating the hell out of me, and I was having real problems with paint coverage.  From 3-15mm I never have to apply more than one coat of anything, but here I was having to do two and three coats over the black primer.  Anyway, I got them painted and matt sprayed, and while I don't think much of them, the boys (particularly the 4-year old) are overjoyed.  And that's enough for me ;) 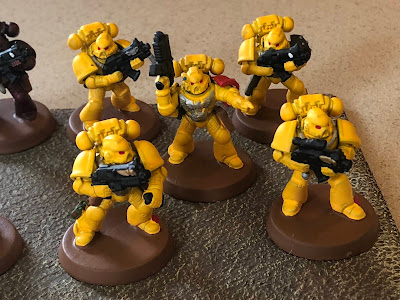 A look at the yellow team. 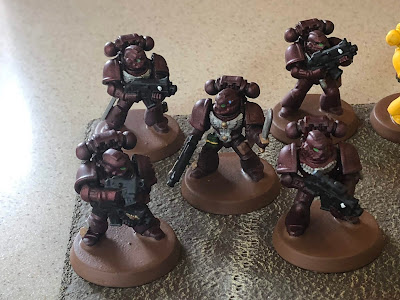 And the burgundy team. 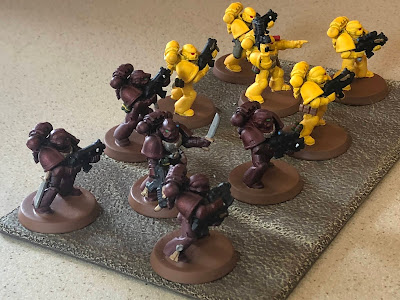 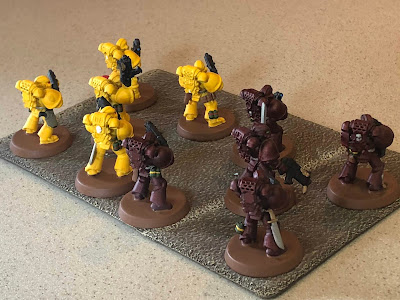 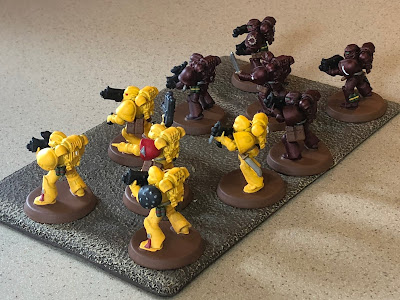 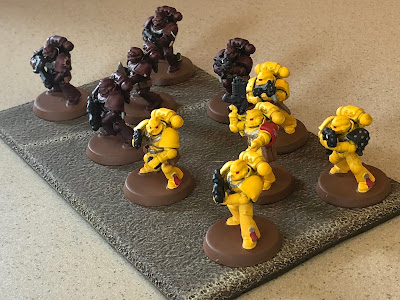 And the last look.

So, two projects done, more to go.  I really had a lot of fun with my "Blood & Guts" campaign in North Africa (here on the Blackhawkhet blog) and I'm eagerly looking forward to taking my GIs and tanks to Sicily and Italy, so I've been making quite a bit of purchases and (so far) a little bit of painting in order to get ready for that. 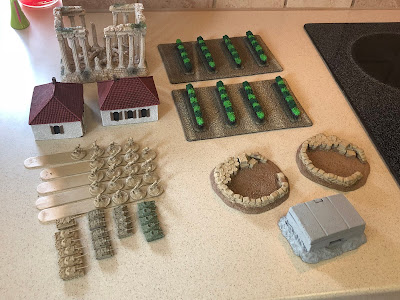 Everything I need to get on to Sicily and Italy, 1943-1944.  Top left is an aquarium set of Roman ruins, just below that are a couple of Battlefront Italian houses, at top right are some Battlefront vineyards, below them are a couple of Novus Design supply dumps, at bottom right is a bunker (not sure who's, got it off Ebay), at left are some Battlefront Italian infantry, and at bottom left is some 6mm armor: a Tiger, five Panthers, five Marders, five Stugs, and five M-10 Wolverines. 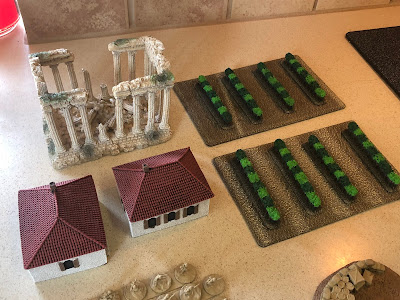 I'm very happy with the ruins, not too big, not too small.  The vineyards are nice, not sure I need those bases, as are the house, which have removable roofs, though I'm not a fan of the interiors being black. 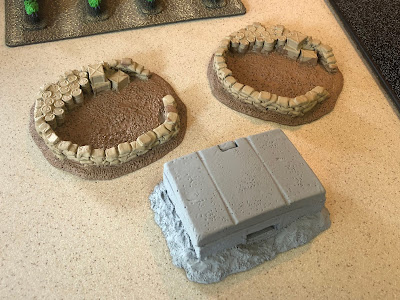 The ammo dumps, so far only primed desert yellow and after my 8-year old painted the dirt, and the bunker is primed gray. 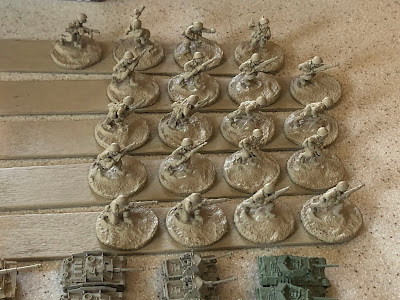 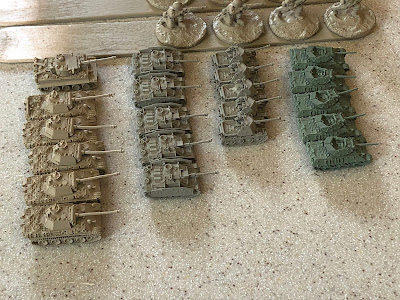 And the GHQ micro-armor, which really can take me all the way to the end of the war, so long as I'm okay with my Panzer IVs (used in North Africa) not getting shurzen. 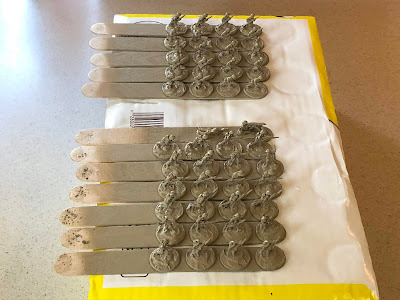 What is this?  Another side project??? 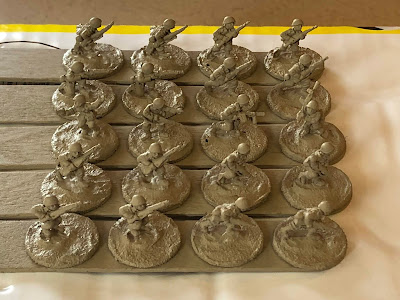 Here's some more Italians, which will be painted a bit differently than the guys for Sicily... 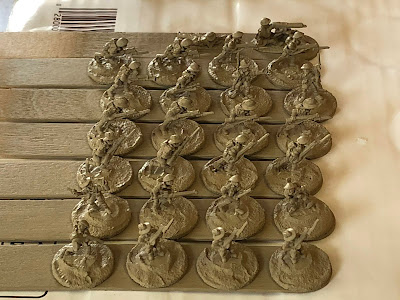 And their Aussie opponents!  The other half of this platoon, which is Battlefront, is getting some reinforcements from Eureka Miniatures (the Vickers at top), will be painted up for some New Guinea action. 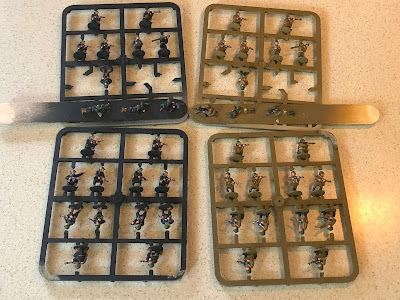 I also bought some of the PSC Cold War Soviet infantry and having been slowly painting them up. 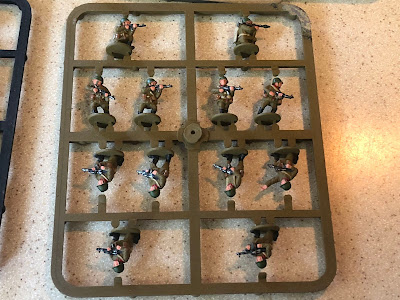 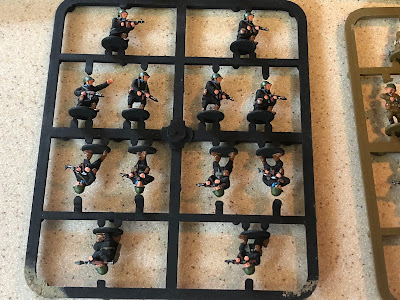 And some Naval infantry.

So sorry, things have gotten away from me in terms of gaming, just not enough time, but next weekend I'll be finishing off (at least the ground portion) of my US Marines in the Dutch East Indies, then we'll see what else I get into.  I need to finish my Israeli War of Independence, Kampfgruppe Klink in France, and get back to Cuba Libre, plus Mr. Travers has really got me intrigued with his tiny wargames concept:

Between he and Steve (over at "Sound Officer's Call" blog), I'm really itching to play some WWII Eastern Front at the company/battalion level, and I think this would be perfect.  I'm thinking to finish up KG Klink, then have the unit's Executive Officer, Major Schultz, get promoted and take over his own kampfgruppe, just in time for Barbarossa.  Sexy, yes!?