So here it is, the conclusion of Kampgruppe Klink's campaign in Greece.  Here are the final map moves. 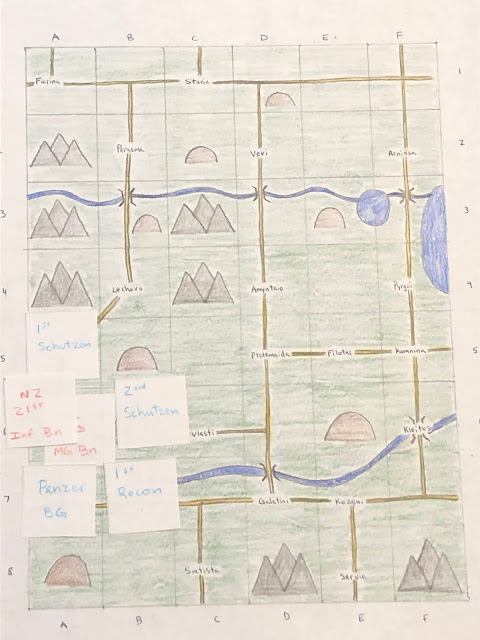 The two remaining Allied battlegroups fall back, but the Germans have tightened the noose. 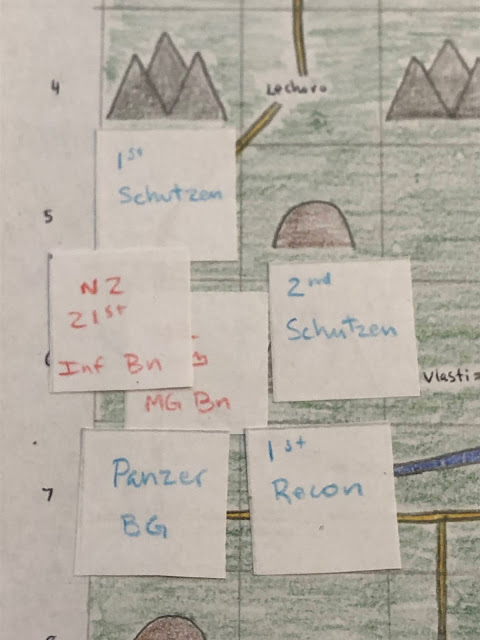 And there is nowhere to go; the unfortunate Commonwealth troops are pinned against a Greek mountain range, vastly outnumbered, and surrounded by KG Klink.  Reluctantly they spike their guns, strike their colors, and march off into captivity, putting another 800 Allied soldiers into the bag.

This secures victory for KG Klink in its campaign in Greece, by eliminating Allied resistance and capturing the objective, Servia.  Campaign progress was swift and casualties were as follows:

The Commonwealth forces suffered 355 casualties, 1225 men captured (425 during battles and another 800 when the 21st Infantry Battalion and 27th Machine Gun Battalion was surrounded and forced to capitulate), and the following vehicles were destroyed or captured: three armored cars, 12 tanks, and twelve Universal Carriers.

And all managed to get in at least one fight during the campaign.  As a matter of fact, here's how it worked out:
Freitag led four fights
Loeb led three fights
Bohm, Ginter, and Wehner each led one fight

Freitag's foot-mobile infantry certainly did the lion's share of the heavy lifting in the campaign, with Loeb's tanks performing the campaign-winning acts by getting into the enemy rear areas and mostly beating up on weaker Allied battlegroups to unhinge then collapse their line.  Neither Recce battlegroup saw much action, but were absolutely instrumental in flanking the Commonwealth defensive line and then screening Allied battlegroups; when they actually did become engaged, neither fared particularly well.  Highly mobile, they had a lot of firepower for their weight, but not as much in the overall scheme of things, and not much staying power as they only had a single platoon of (motorcycle-mounted) infantry, each.  They held their own but suffered mightily, to the point the two Recce battlegroups were forced to combine in order to salvage any combat capability at all, following each's single battle.  Colonel Klink took note of this and, seeing as how the Recce battlegroups are being used more as cavalry than actual reconnaissance elements, vowed to increase their robustness prior to their next campaign.  Ginter's 2nd Schutzen was the only German battlegroup that had a hard time getting into action, though it was through not fault of his own, and he performed valiantly (was decorated) when he did get into action.  Being foot mobile, Freitag's Schutzen were the first into the breach, and once the Panzer and Recce battlegroups flanked the Allied line and the enemy began withdrawing, Ginter and his men simply had a hard time catching up!

So those are the stats; how did it go?  I would absolutely love to hear your thoughts on the campaign, so don't be shy!  From my standpoint, the campaign system/map I borrowed from Peter was absolutely fantastic.  It worked like a champ to generate battles on the tabletop and give an actual sense of motion to the campaign (at least for me), with the Germans actually able to work to crack the Allied line, pour mechanized forces through it, then outflank the rest of the line, just like you'd draw it up.  I'm exceedingly pleased with how this went and will work to expand upon it, mainly from the standpoint of enlarging the playing area and adding more battlegroups.

Additionally, the modifications I made to Chain of Command seemed to work pretty well, and the games themselves were a lot of fun.  The 'ambush deployment' added a lot of fun and excitement to the Commonwealth defense games, though it made the German defense games too easy...  Going forward, I'm not sure I'll continue with Chain of Command, and the reason is that I actually want to play larger games, so I'm looking at going back to the Lardies' 'other' ruleset, "I Ain't Been Shot, Mum," which I've had some success with in the past.  The only issue I've had with IABSM is that, being solo, the regular blinds system doesn't seem to work well for me; I've had fun with just starting with both sides on the table, but I'd also like to be surprised a bit, and so I'm thinking about working out Joe Legan's "Platoon Forward" with IABSM to see if I can't find a sweet spot.

So, to wrap up the campaign in Greece, LtCol Klink was very impressed by Captain Freitag's leadership, so he recommended him for the Iron Cross 1st Class and promotion to Major.  The German High Command, very impressed by LtCol Klink and the kampfgruppe's performance, not only did that, they awarded Klink the Knight's Cross to the Iron Cross and meritoriously promoted him to Colonel!  The award and promotion also came with an increase in the size and capability in the kampfgruppe's forces, to the point his unit is now officially known as "Panzergrenadier Brigade Klink," though we'll still just call it "KG Klink."

Following the successful campaign, KG Klink hung around Greece for another week or so while things were coming to an end, and then was pulled back to Germany to rest, re-fit, and absorb replacements, before moving into a very aggressive training regimen to prepare them for something very big.  No one knew exactly what was coming next, but they figured it must be big as the Kampgruppe was considerably enhanced for it; before Greece, KG Klink consisted of a Panzer Company, a Schutzen Company, a Reconnaissance Company, and small detachments of engineers, assault guns, and panzerjaegers.  KG Klink ballooned in size, and for the upcoming campaign it would go into battle with a Panzer Battalion of three companies, an Engineer Battalion of three companies, two Grenadier Battalions of two companies, each, a Reconnaissance Battalion of an armored reconnaissance company and a motorcycle company, and a Schwere Battalion consisting of an infantry gun battery, an anti-tank gun battery, an assault gun battery, and a panzerjaeger battery.  The Engineer Battalion is mounted in halftracks and so will be paired into battlegroups with the panzer, while the two Grenadier Battalions are now truck mounted and will constitute their own battlegroups, augmented by infantry guns, ATGs, while the Recce Bn will split into two battlegroups of armored cars, light tanks, and motorcycle infantry augmented by assault guns and panzerjaegers.

So big changes to the kampfgruppe, for much larger battles!  I am eager to get to Barbarossa, with KG Klink pulling the direct route to Moscow (Minsk-Smolensk-Vyazma), and will get to it as soon as I can, just have some painting and -rebasing to do...