KG Klink Mini-Campaign in Greece, Map Moves for Turns 5 and 6

Here are the map moves for Turns 5 and 6 (because there were no fights after moves in Turn 5).  In Turn 4 we had 2nd Recce push back the Australian 2nd Bn/8th Inf Regiment in D4, and 1st Schutzen successfully defend the B3 bridge from Brit Rangers/9KRRC and Royal Engineers/NZ Cavalry, destroying the Royal Engineers/NZ Cavalry and pushing the Brit Rangers/9KRRC back before pursuing them to B4. 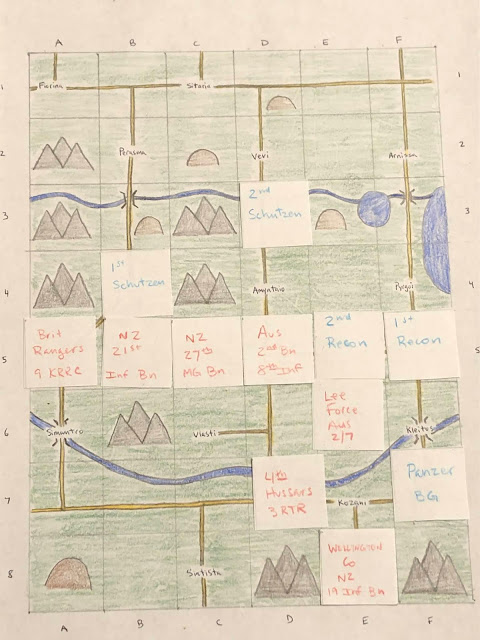 -RE/NZ Cavalry: Destroyed by 1st Schutzen in Turn 4 at the B3 bridge.
-Brit Rangers/9KRRC: Fall back to regroup and reorganize (A5 from B5).
-27th NZ MG Bn: Fall back to straighten the line (C5 from C4).
-21st NZ Inf Bn: Advance to plug the line opposite 1st Schutzen (B5 from A5).
-Aus 2/8 Inf: Stand fast at D5, holding the line.
-Lee Force/Aus 2/7 Inf: Fall back to refuse the flank (E6 from E5).
-4th Hussars, 3RTR: Fails to realize the threat to the right flank, holds firm again (D7).
-Wellington Co, 19th NZ Inf Bn: Remembering its limitations (extraordinarily weak and immobile) and its job (protect Servia), it holds on the objective (E8).

1st Schutzen: Hold to dig-in, continuing its mission of protecting the B3 bridgehead (B4)
2nd Schutzen: With 1st Schutzen in good shape at the B3 bridgehead, moves east to cross the D3 bridge and get on the main Allied line's flank (D3 from C2)
1st Recce: Up and over to hem in the Lee Force/Australian 2/7 (F5 from E4), supporting both 2nd Recce and the Panzer Battlegroup
2nd Recce: Up and over to hold the enemy flank (D5 from D4).
Panzer: Rapid advance into the enemy's rear, crossing the F6 bridge, nothing between them and the objective (Servia, E8; F7 from F5)

So, the Germans are working on absolutely dismantling the Allied defense, flanking and getting in behind the Commonwealth forces, with nothing standing between their panzers and Servia.  There are no fights scheduled this turn, so we move on to Turn 6, with the biggest question being, do the Germans go straight for Servia, or work to dismantle the Allied armored forces (Lee Force/Aus 2-7 and 4th Hussars). 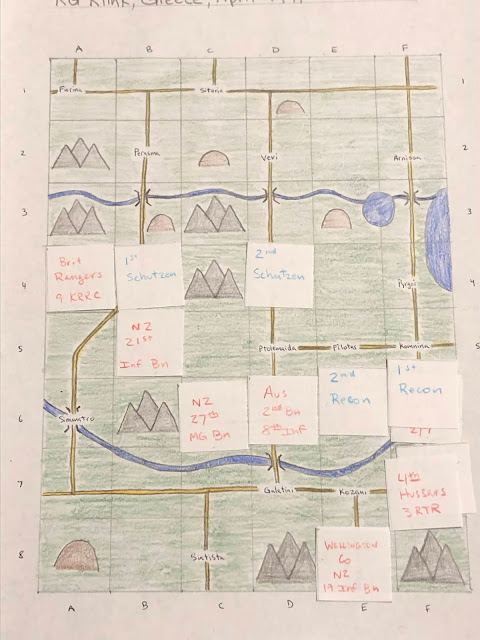 Turn 6:
-RE/NZ Cavalry: Destroyed by 1st Schutzen in Turn 4 at the B3 bridge.
-Brit Rangers/9KRRC: Advance to flank 1st Schutzen and hopefully compel them to fall back without a fight (A4 from A5)
-27th NZ MG Bn: With 2nd Schutzen appearing to their front, German reconnaissance elements off their right flank, and rumors of panzers in their rear, they do not hold the line, they fall back! (C6 from C5)
-21st NZ Inf Bn: Hold opposite 2nd Schutzen to allow Brit Rangers/9KRRC to maneuver in support (B5)
-Aus 2/8 Inf: Same as 27th MG Bn, they're unhinged by the threat to their right flank and fall back (D6 from D5), wrecking what Brit Rangers/9KRRC and NZ 21st Inf Bn are trying to do
-Lee Force/Aus 2/7 Inf: Moves east to cut off the German penetration, but thus opens up a hole between them and Aus 2/8 (F6 from E6)
-4th Hussars, 3RTR: Finally gets in the game and performs its role as the armored reserve, moving at the double to engage the German panzer group (F7 from D7)
-Wellington Co, 19th NZ Inf Bn: Holds on the objective (E8).

1st Schutzen: Getting nervous with Allied battlegroups to its front and now on its flank, thinking about falling back on the B3 bridge, but holds, hoping its comrades further east compel the Allies to fall back (B4)
2nd Schutzen: Advances south to pressure the collapsing Allied right, cutting off their armor (Lee Force and 4th Hussars) from the infantry in the west (D4 from D3)
1st Recce: Advances into combat with Lee Force/Aus 2/7 in order to fix them while Panzer Battlegroup reduces 4th Hussars, looking for help from 2nd Recce as necessary (F6 from F5)
2nd Recce: Moves up to separate Lee Force from Aus 2/8 (E6).
Panzer: Stands fast and prepares to receive 4th Hussars (F7)