KG Klink Mini-Campaign in Greece, Map Moves for Turns 7 and 8

Here are the map moves for Turns 7 and 8 (because there were no fights after moves in Turn 7).  In Turn 6 we had 2nd Recce and Panzer BG take on the primary Commonwealth armored formations and eliminate them, destroying the Allies' mobile reserve, gaining access to the campaign objective (the city of Servia, E8), and flanking the main Allied defensive line.

However, 2nd Recce took significant casualties, as did 1st Recce, so the two carried out an operational pause to combine and reorganize, which cost the Germans time to exploit their victories, but there was a bigger problem.  Following Pz BG's resounding defeat of the British 4th Hussars, there was confusion regarding the command relationships that resulted in a lack of orders to execute the expected lightning-quick exploitation into the Commonwealth's rear area.  You see, 1st Lt Loeb, the commander of the Panzer Battlegroup, was on hand, as was Colonel Klink, the overall Kampfgruppe Commander.  Following the battle that destroyed 4th Hussars, Lt Loeb assumed Colonel Klink, his commander, would order the exploitation, while Colonel Klink assumed the tactical commander would exercise his own initiative in order to affect exploitation that would have seen the Australian 2nd Battalion, 8th Infantry Regiment's withdrawal to the south (towards the campaign objective of Servia) cut off, the campaign objective isolated, and the main Commonwealth defensive line collapse to the west or risk being flanked and destroyed in detail.  This lack of exploitation would cost the Germans dearly in terms of campaign maneuver.

*This is all fictional narrative, blaming it on a command breakdown between Col Klink and Lt Loeb, when what really happened is I simply screwed up, I forgot that after 'Breakthrough' and 'Major' victories the winner is immediately permitted to carry out an exploitation move of +2 or +1 Movement Points, respectively.  Conversely, 'Minor,' 'Major,' and 'Route' defeats require the loser (assuming they were not eliminated) to make a compulsory retreat of -1, -2, or -3 Movement Points, respectively.  The Germans should have immediately pushed straight west to D7, cutting off Aus 2/8's southern withdrawal route and isolating "Wellington Force" at Servia. 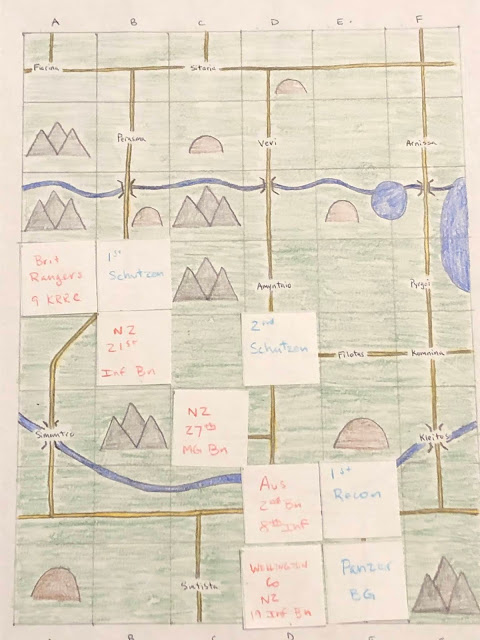 There are no fights scheduled in Turn 7, so we roll straight into Turn 8. 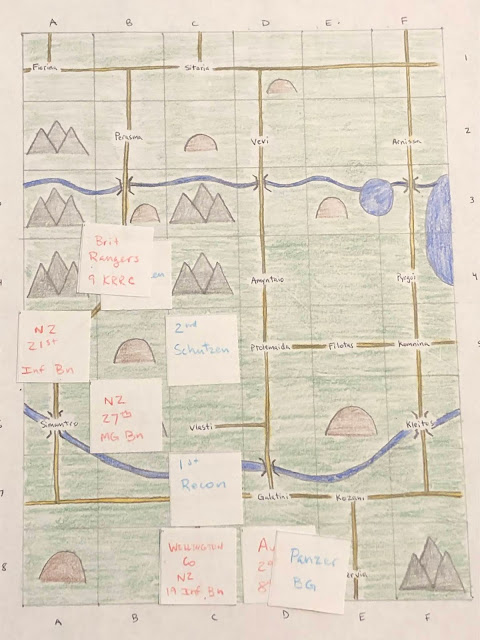