Some more of Anton's Modern Marines from Flytrap Factory.  I told you I can't get enough of these guys! ;)  This will totally crack you up: I had some lying around and wasn't sure what to do with them.  With the small size of most of my games these days I didn't need to simply add them to the desert and temperate MARSOC Raiders I'd done up previously, and I've got plenty of Modern US troops already done up in winter colors/scheme.  What to do?

Well, I'm really not happy: I would love to do some modern French fighting in Mali/Central African Republic, but I can't find suitable troops.  As near as I can tell, there are only two manufacturers that have 'modern' French troops available, Peter Pig and QRF.  Peter Pig's are good figures but not suitable for Mali; they are sculpted as 1980s/early 90s troops.  QRF's are decent models, but not what I'm looking to use for close-up, skirmish gaming with just a couple figures on the table (I've actually re-based my QRF Modern French, temperate and desert, Flames of War style.  That is, four to a base, and I'm quite happy with the look).  So, dear manufacturers, I need some help!  I need one of the following:

1.  Jimmi from Flashpoint Minis makes the jump into Ultramodern Warfare with his introductory line of Modern French.

2.  Anton from Flytrop takes his Modern Marines and makes some slight alterations (basically just turning M-16s into FAMAS, maybe add some AT-4s, which is a good idea for the US Marines anyway, and perhaps even the French sniper rifle and 51mm mortar) to produce some Modern French.

3.  Martin at Peter Pig takes his Modern Marines and, as mentioned above, makes some alterations to convert them to Modern French.

Please!!!???  I'm begging ya, with tears in my eyes.  For those in the know, how much does it cost to commission someone to put out one pose, and if you do more than one pose, does it get cheaper?

Anyway, let's get to the Modern US Marines that I painted up as Modern French troops, in both desert and temperate uniform/basing. 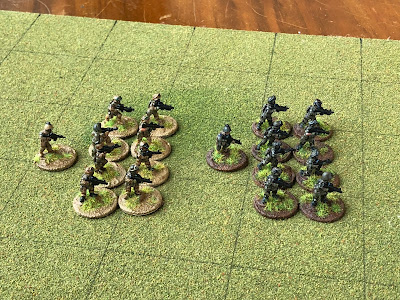 There's a total of sixteen of these pseudo-Frenchmen; the guy at far left and the guy at center are both painted up as MARSOC Raiders.  The reason for this is: I needed one more grenadier for the French desert troops, and one more SAW for the French temperate troops, so I stole the needed guy from my Raiders and then painted up a rifleman (each) to replace the guy I stole. 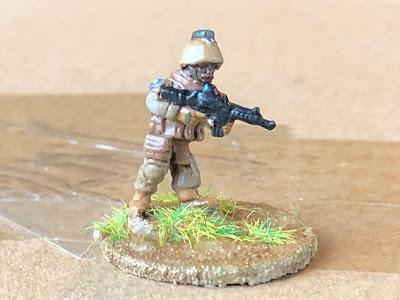 So here's the desert replacement MARSOC Raider, a pose I hadn't seen before from Flytrap Factory.  I'm not sure what the deal is on top of the guy's helmet; maybe a Blue-Force Tracker, or a video camera (both things that were being experimented with as I was leaving the Marine Corps in 2004)? 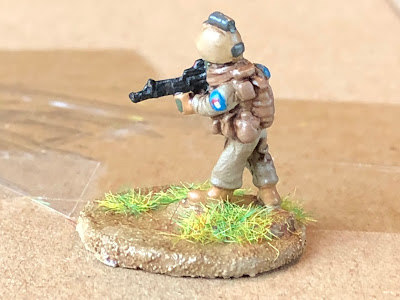 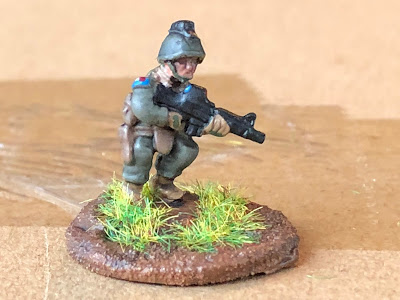 And then the temperate replacement Raider.  He's also got the deal on his helmet.  It helps mark these two as leaders ;) 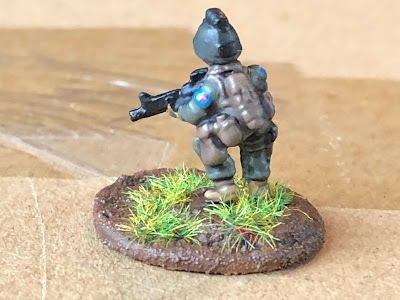 And now, on to ze French! 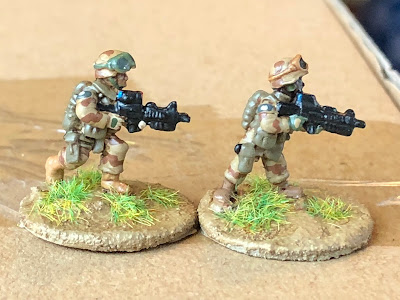 A pair of grenadiers for the desert troops. 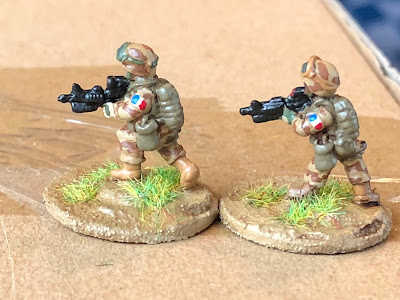 Reverse, where you get a great look at the big French flags I painted on their sleeves! 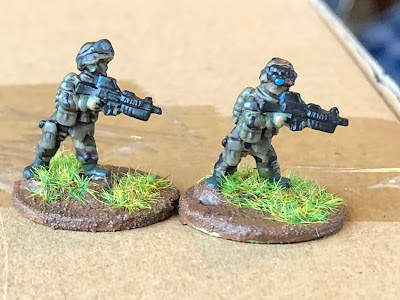 And then a pair of grenadiers for the temperate force.  Guy on right is wearing NVGs. 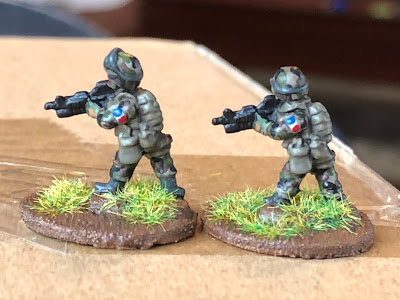 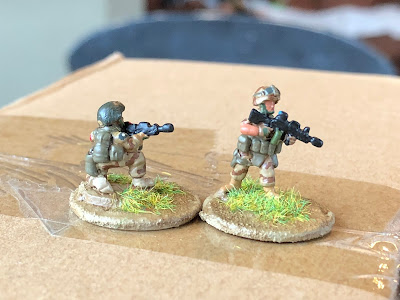 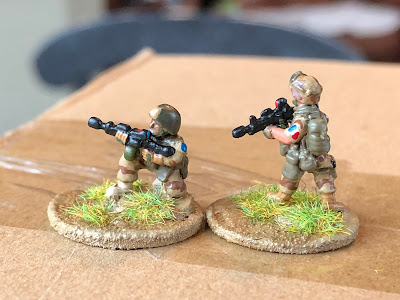 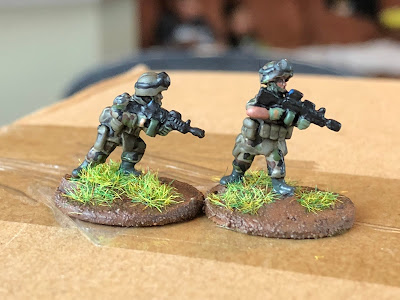 And the two temperate SAW gunners. 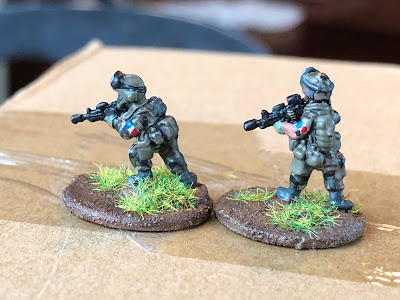 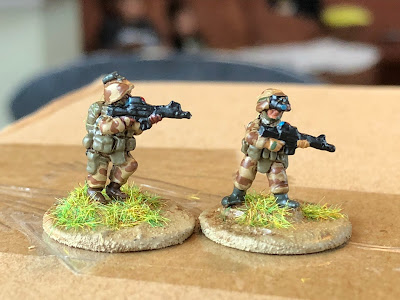 A pair of desert riflemen. 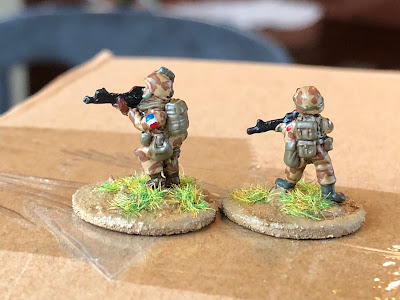 Reverse.  I really wish I had another of the pose at left, but I looked at all the guys I have and this is the only one.  His pack really looks like a medic's pack. 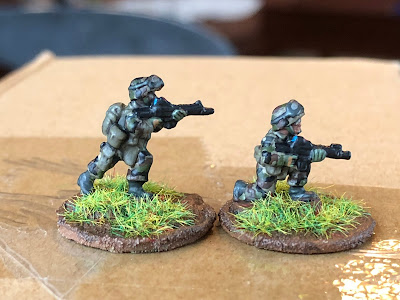 A pair of temperate riflemen. 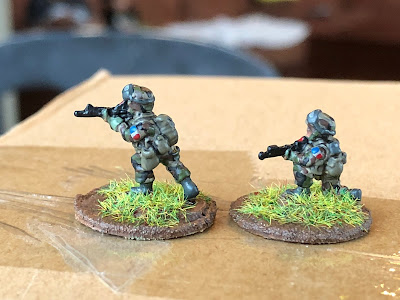 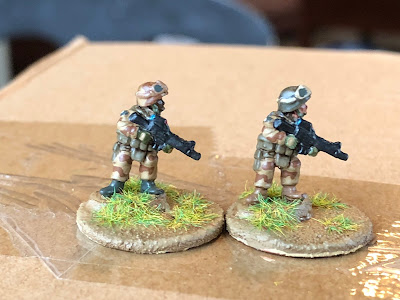 And the last pair of desert riflemen. 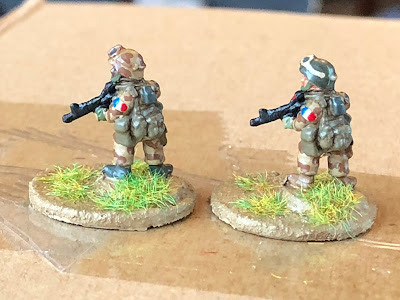 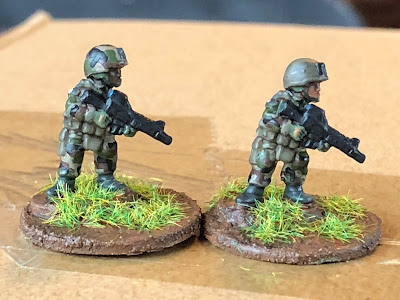 And the last pair of temperate riflemen.  I didn't notice until I was painting them, but if you look closely at these two, they're both wearing helmets that are different (larger and more round, not angled at the bottom like the 'normal' Fritz or follow-on helmets) than everyone else.  The pose is exactly the same as the two desert riflemen in the previous photo, except for the helmet.  Funny. 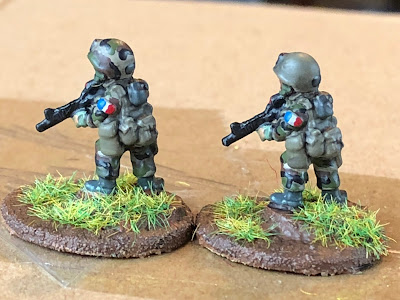 And so, ladies and gentlemen, those are my pseudo-Modern French, at least for the time being.

One more post to make, then I've documented (pretty much) all of my painting efforts in 2017.  Now I just need to get back to gaming!