The last set (so far, at least) of troops for Modern Africa are my Rebel Minis Chinese Infantry.  Not sure why I bought Chinese infantry, didn't really fit into any plans that I had, but then it hit me: these guys can serve as UN troops in my Modern Africa setting (not representing Chinese forces, just some nameless, faceless "UN" troops.  Maybe.).

The Rebel Minis Chinese Infantry is a pretty good pack, with 21 guys in seven different poses (I'm loving the large number of different poses per pack).  They're all in helmets, and don't have much in the way of gear.  Also, they are all armed with the same 'bullpup'-type rifle, which is my only real complaint.  I wish there were some with SAWs/LMGs and some form of AT weapon, but now would be the time to inform everyone that Rebel Minis does a separate Chinese Heavy Weapons set.  In any case, for my use as UN peacekeepers, they are good with only rifles. 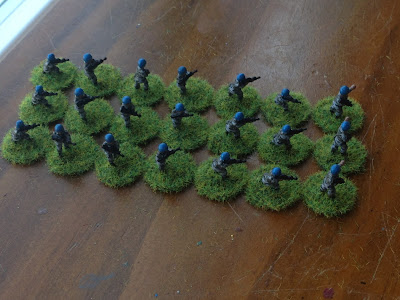 The whole force of 21 guys, with their distinctive blue domes.  Moving on to the individual poses. 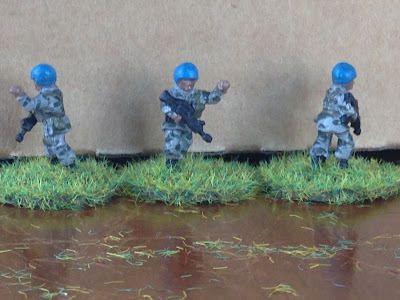 I made up a quick green and gray camouflage to throw on them (shouldn't say made up, I found some pics of Chinese troops wearing something similar), and here you can see the very light gear, just a belt with a couple magazine pouches on the front and a 'Y' harness on the back (hard to see in this pic). 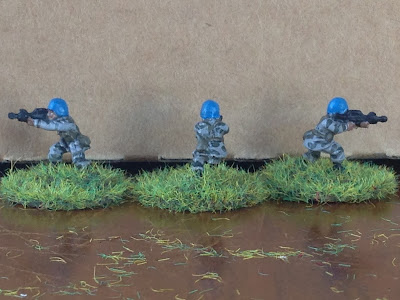 Next up, a guy moving forward at the ready.  I like the sense of motion. 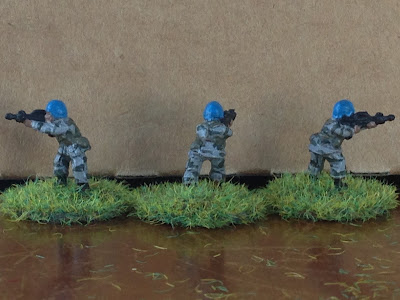 As I've stated previously, the cost of having all these poses is that they can get a bit 'samey.'  This is a different pose than the previous pic, with this guy standing a bit more upright. 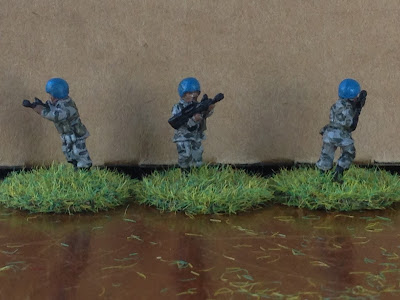 Moving forward at the tactical carry. 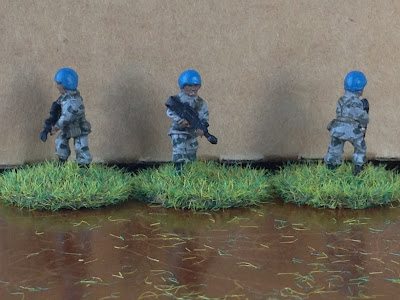 Moving forward at the alert carry. 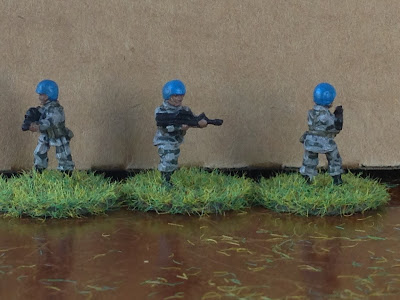 Another guy moving forward, between the tactical and alert carries. 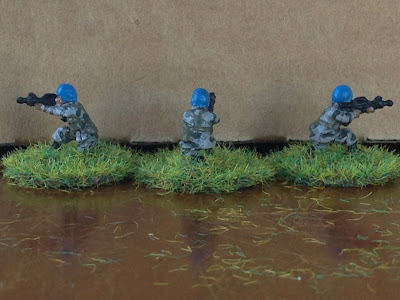 Rifleman in the kneeling position, though he has the wrong leg forward...

That's the whole Chinese Infantry pack; nothing too fantastic, but cheap and very quick to paint up and get into action.  Just need to get them into action. 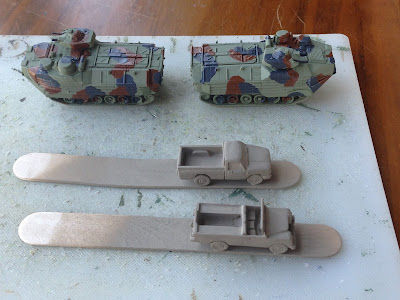 Just to prove I've gotten a little work done on Irishserb's gorgeous AAVs, as well as the fact I bought a couple Peter Pig vehicles from Brookhurst Hobbies.  To show how old this pic is, I actually finished the bottom vehicle and used it in the final battle of Cuba Libre. 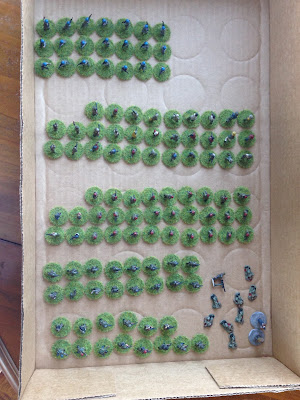 A shot of everything I've got ready for Modern Africa.  From top to bottom: 21 blue helmeted UN infantry, 27 African Rebels with 4 Foreign Special Forces 'advisers,' 27 African Government infantry with 4 European 'Security Contractors,' 16 French Foreign Legion troopers, and 14 guerrillas/ mercenaries/paramilitaries (Battlefront Vietnam-era SEALS).  Not sure when they'll see the table though...

On a positive note, tonight I finished up the basing on my 15mm Flytrap Factory USMC and Brit Marines, and I received my Elhiem 20mm troops, got them cleaned up and glued to sticks so I can prime them.  More to come.