Here is the newest debut of my 15mm forces.  So much for a side project, eh?  In any case, these are my latest production, and they are my new favorite troops.  There's a couple quirks, and (as usual) my pics aren't the best and don't do them justice, but these figures are absolutely amazing, and I'm pretty happy with my paint job too.

So, these are 15mm Modern US Marines from Flytrap Factory.  I don't know yet where they will deploy, and I don't know what rules I'll be using them with, but they're ready.  I painted them up in the US "Multicam" pattern, and I'm pleased with the way it turned out.  Being that they're Multica, so suitable for temperate, tropical, and desert climes, I did my best to give them 'multicam' bases too, which amounted to a textured base painted desert sand, given a strong wash, then sticking some static grass to them.  It looks okay, but now I just got two forces for the price of one ;)  Which is why I didn't list these as "Modern Middle East" or "Modern Africa;" they're both. 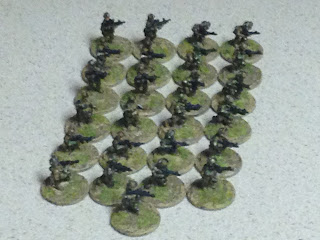 The whole force, 25 guys from two packs.  I bought the 'stand alone' USMC pack of 15 troops, and another Skirmish Sangin scenario pack that had three HMMWVs (which haven't been touched yet) and another ten Marines.  Here you can see my 'multicam basing' in aggregate; not too bad. 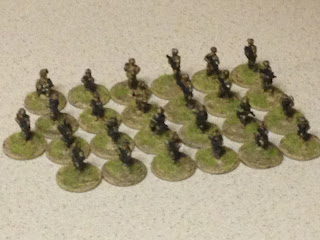 Another look at the whole force.  You can tell there were two different sculptors used for the two different Flytrap USMC packs, but they fit well together.  Both packs have a lot of character, a lot of poses, and the gear weapons (for the most part) look fantastic.  I say 'for the most part,' because there are a couple weapons in here that look a bit strange (detailed below), and several of the M-16s look like they're sporting Vietnam-era 20-round magazines...  But I don't care, I still love'em!

Let's get to the poses.  And please forgive me; I'll be damned if I can take a good photo here lately.  Part of the problem is there's been no natural light, it's been overcast here for the past couple weeks.  So bear with me.  These pics really don't do them justice, the figures are incredible. 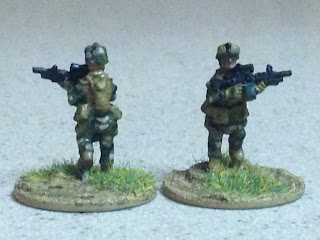 First up is a SAW gunner pose from the Skirmish Sangin pack.  As I mentioned, I went with Multicam for the uniforms, then put a tan color on all the gear.  I left all the weapons black as I haven't had great success with painting weapons camouflage in 15mm. 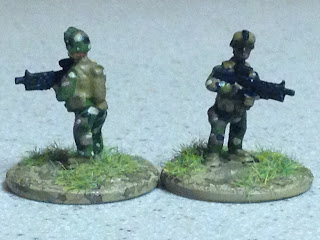 Next pose from the Skirmish Sangin pack is an M-203 gunner (on an M-16A4, evidenced by the ACOG sitting atop a rail).  Love the fig; as anyone following the blog knows, I'm partial to 203 gunners ;) 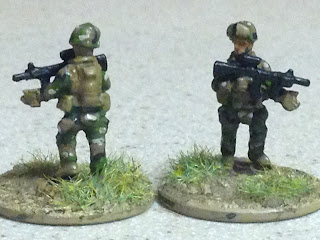 Next Skirmish Sangin pose is a rifleman, again with M-16A4, ACOG, and this time with broom handle. 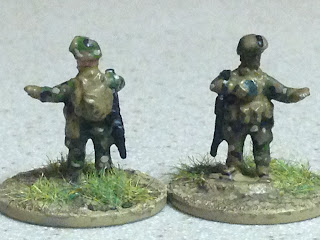 Damn my picture taking skills!  This is the next pose from the Skirmish Sangin pack, and they look much better in person!  What you're looking at is, as above, two figs of the same pose, one facing us (right) and one facing away (left).  Here you can see that, once again, in painting these up I went with three different skin tones; on the right is African American, on the Caucasian.

The figs don't look anywhere near this featureless, believe me, its' just my photo skills... 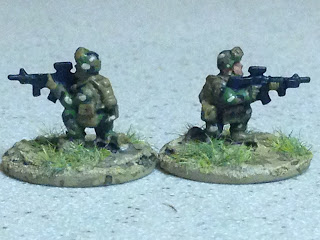 Last pose from the Skirmish Sangin pack, all others will be from the 'stand alone USMC infantry pack.'  Another M-16A4 with ACOG and broomstick. 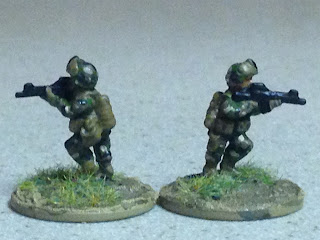 A rifleman with M-16 at the ready carry, moving forward with eyes over the sights. 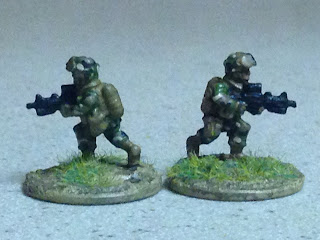 Probably my favorite pose, the other M-203 guys.  But you can see the magazine looks just a shade short. 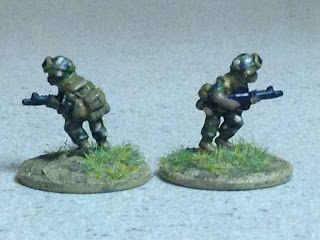 I really like this pose: another M-16 rifleman, and the only one showing some skin, with his sleeves rolled up.  His magazine is definitely short, but I love the character. 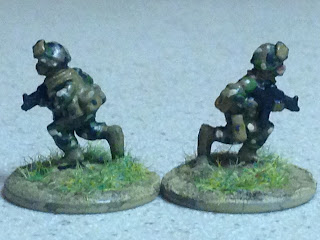 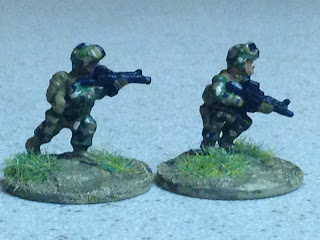 And here are two more riflemen, in differing poses.  Here you can see the guy on the left has one of the EOTech-style optics, looks like the right is an aiming dot. 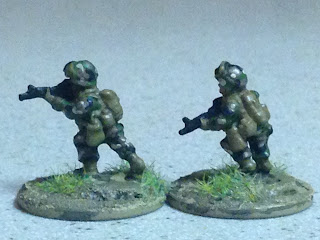 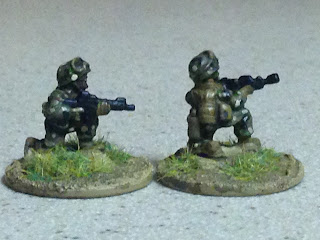 On left we have another M-16 with EOTech, on right we have some sort of SAW, and it's cool because we actually have a left-handed pose!

I say some sort of SAW as frankly I can't tell anymore.  Yes, I was a Marine, but 'back then' all we had was the M-249 SAW, and none of these crazy-ass attachments they have nowadays (okay, we had attachments, but not like now.  A few people had an ACOG and/or PEQ2/PAC4, not everyone having everything).  So I'm not sure how to spot the differences between the M-249, the Mk48, and the M-27. 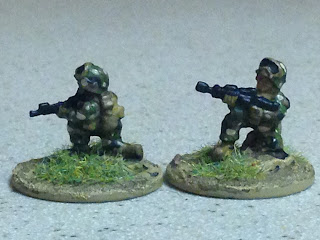 Reverse.  The SAW could be an M-249 I suppose, but that flash suppressor is pretty big.  The weapon looks like it has an EOTech sight and a PEQ/PAC (can't tell the difference at this scale). 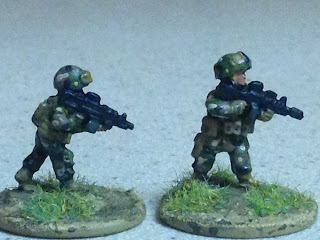 Two more SAWs.  The one on the left is pretty clearly the short version of an M-249, and the one on the right looks to me like the M-27, but I'm not sure. 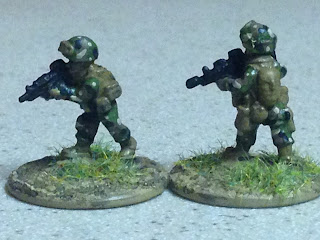 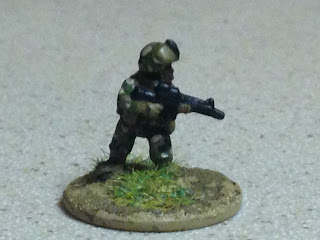 And the last pose, a solitary rifleman with M-16 and EOTech sight. 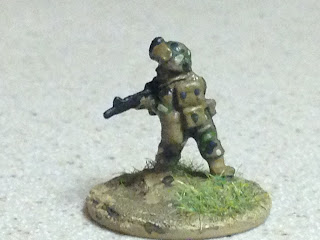 Again, sorry for the dismal photos, but these little guys are fantastic and I can't wait to get them into the fight (and I haven't even started my 20mm campaign yet!).

Lots more posts to come of recently completed troops, and I should be starting my Balkans campaign any minute now, so stay tuned.