First up, Happy Veteran's Day, and Happy (belated) Birthday to my beloved Corps.  So, being a holiday, I was home and needed something to do, so I sat down at the painting table to work on some beautiful 20mm figures from Elhiem, then figured I'd go ahead and post the results.  I'm pretty proud of these; they won't win any awards, but I'm getting better at this stuff, or at least I feel like I am ;)

Part of this has to do with the big question on my mind: what am I going to do next?  Everyone knows I'm a sucker for campaigns, so where will my next one go?  I've got so much to do, and so many more ideas I want to get to.  I've had a bunch of 20mm figures lying around, unused and, until day, half of them unpainted.  I want to get them into the fight, and I was perusing the "Crisis in Alcovia" blog (link here: http://alcovia.blogspot.com/ , and this post specifically:
http://alcovia.blogspot.com/2011/11/down-to-wire.html) and it got my gears to turning (albeit ever so slowly).

I finished my Cuba Libre "Liberation" campaign, i.e., a group of Cuban exiles invaded and overthrew the Castro regime in February 1990 (background, roster, and 32 batreps here:
http://blackhawkhet.blogspot.com/search/label/Cuba%20Libre), and now elections are being held and the Cuban Liberation Army (CLA) is being reorganized into a National Defense Force and an expeditionary force that will travel the world to kick ass.  So, I've got a few ideas for that:

1.  First, I need to put together an air force roster and play out some air-to air battles where the CLA is taking on Castro's Air Force. I've got some F-4s to square off against some MiG-21s in 1/600 for this.

2.  I've got this idea where a Castro supporter leaves Cuba and sets up HQ in the fictional island nation of Parador, where he wants to take on the newly liberated Cuba.  I want to do this in 15mm, and I'm getting figures and terrain ready, but I'm not ready yet.  In my head I see this going on for a very long time, so it won't be a campaign I play straight through, rather some special ops folks from the expeditionary force will be deployed long term to topple the Paradoran government and take out the Castro supporters, and so I'll play a game or two here, play some other stuff, play another few games, play some other stuff, and so on, sort of duck in an out.

3.  The Cuban expeditionary force's first big deployment is going to be to Kuwait for Desert Storm in Jan - Feb 91. I've already got a bunch of stuff for this (primarily 10mm Minifigs for ground combat and 3mm aircraft for air combat), working on getting it all ready to go.

4. This idea, and in the Cuba Libre campaign it would start prior to Desert Storm (as would the campaign to overthrow Parador), is the 'Crisis in Alcovia' idea.  That is, a former Soviet state or Balkan state is experiencing a civil war with government forces, rebel forces, and militias on both sides.  I need to make up a cassus belli, but Cuba is either asked for help by the government force or decides to go in on the side of the rebels, and deploys some special ops troops to take part.

So I need to come up with my background; I love the idea of using Alcovia, and the proprietary owner, Mr. Eli Arndt, is actually very helpful and lets other gamers use Alcovia as a gaming setting, but my problem is that the civil war in Alcovia doesn't start until 2010, and I need something to do in early 19990.

In any case, these 20mm troops are likely to see action soon in an place a lot like Alcovia, prior to Desert Storm kicking off. 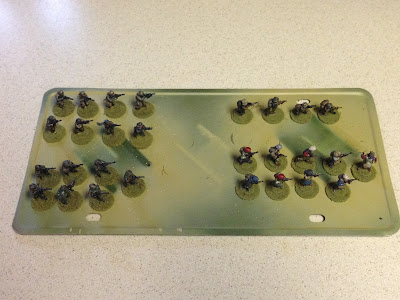 So, here's all my 20mm troops so far, with the 17 on the left being guys that I finished up and posted here previously, and the 13 on the right being the guys I just did today. 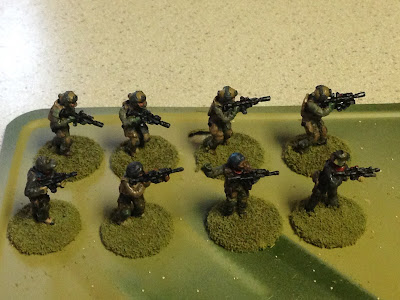 As a quick refresher, here are the 'good guys' I've got so far.  All figures in this post are 20mm Elhiem miniatures; the top row is "SF08 US SEAL DEVGRU team with carbines", while the bottom row is "SF03 Generic SF or PMC unit in a mix of gear". 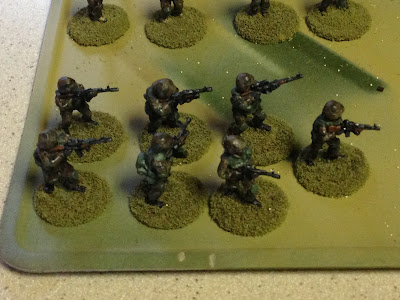 I was going to write these are the bad guys, but it just occurred to me that's not true.  These guys will likely see action as both good and bad guys, meaning the government regular forces will be dressed like this, and so will the rebel regular forces.  Who's good vs who's bad will depend on which side I take ;)

Now for the stuff I just finished. 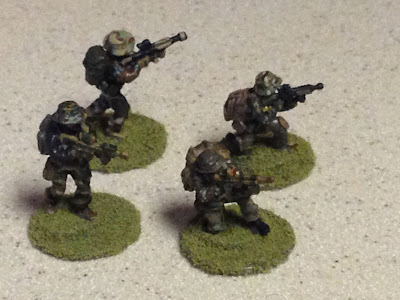 Being SF guys, I've got them painted up all crazy, none wearing matching uniforms pieces, much less matched up with anyone else. 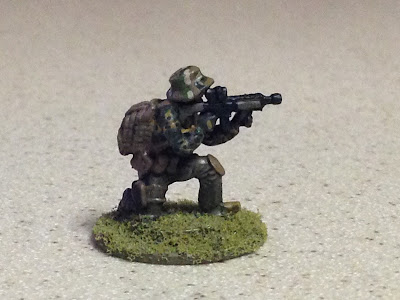 Here's our first guy.  Sorry my pictures suck so bad, guess I'll have to describe the uniforms: this guy has plain green trousers, temperate MARPAT blouse, and a boonie cover with a made up camo pattern.  You can't really see it (of course), but the green MARPAT looks really good (to me; it took a lot of experimenting to make it look right). 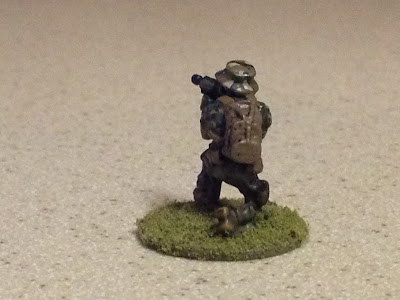 This guy has the small pack. 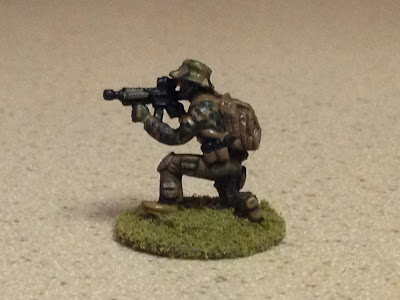 Looking the other way, you can see the MARPAT top a little better. 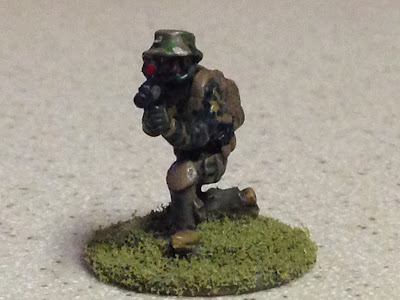 Aiming right at ya.  To keep them uniform with the guys I've already finished, I kept the basing very minimalist.  I should do something to liven them up a bit... 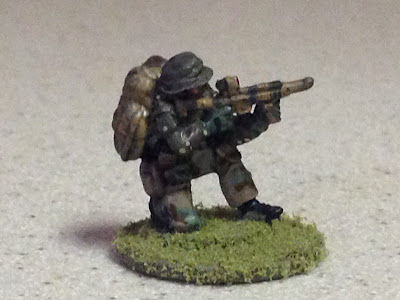 Next guy, also kneeling, but you can already see his big pack.  He's got desert tri-color trousers on, Multicam blouse, and a plain green cover. 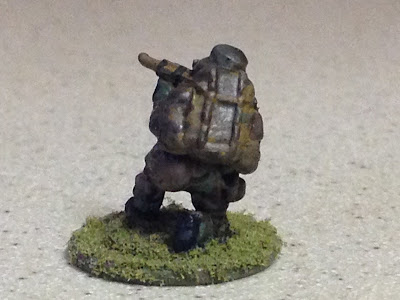 A look at the pack. 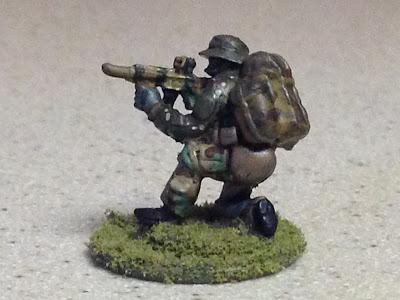 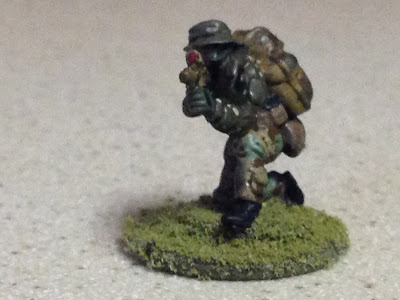 And coming at ya. 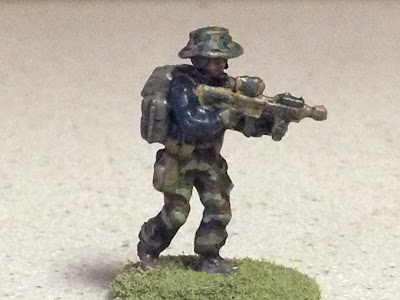 Figure number three, tall and skinny, he reminds me of someone I knew in the Marines.  He's wearing Brit DPM trousers (first try at that, it's okay, not great), a plain dark-gray blouse, and a green MARPAT cover.  I think you can see the MARPAT pattern I did a bit better on this guy's hat. 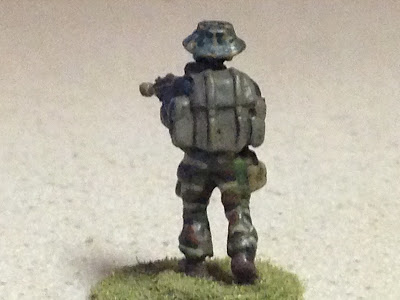 From the rear.  Glad I'm not humping that pack... 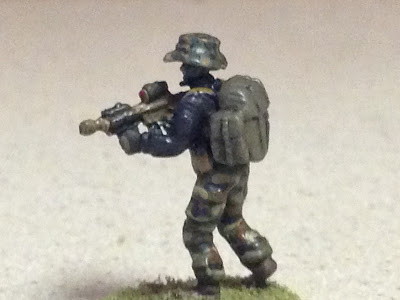 Other side,  If you look at his face you can sort of see he's wearing body comms, probably some sort of intra-squad radio.  All four guys have them; I meant to shoot a pic with the flash on so you could see it.  I didn't want to use the flash the whole time as I wanted you to see the 'true' colors. 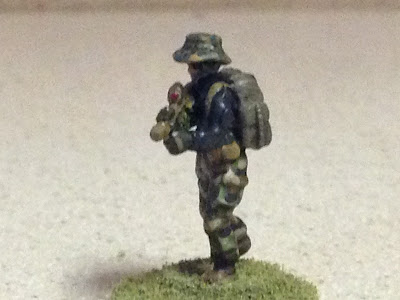 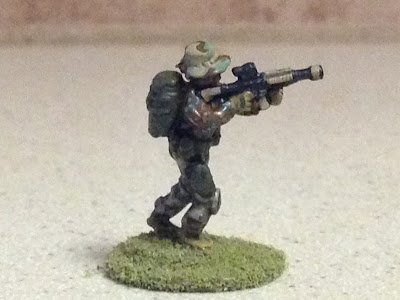 And the last guy.  Dammit, the pics are too dark!!!  This guy has desert MARPAT trousers on (again, I think they look pretty good, took me a bit to figure it out, but I think I got it), a made up camo pattern blouse, and a desert tri-color hat. 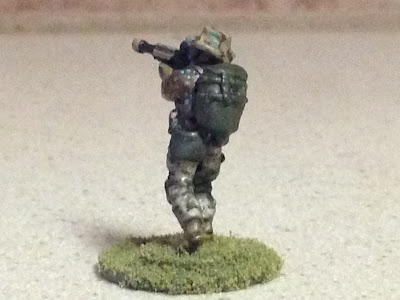 Medium-sized pack I suppose, and a little better look at the trousers. 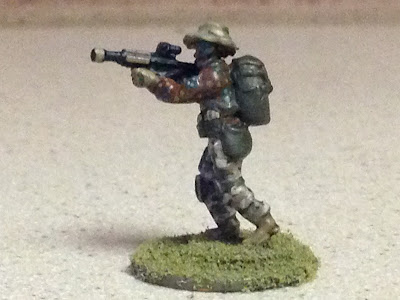 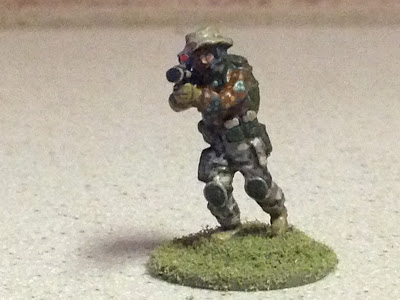 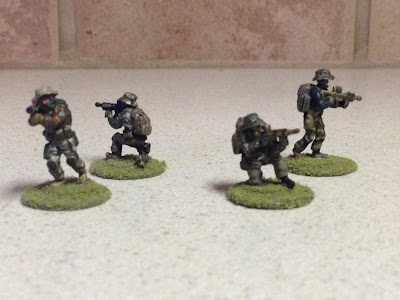 The team on the move.  Actually, these guys won't be used as a team; rather, I believe I'll mix them with four other SF-guys in mixed dress to make two four-man teams.

On to the militia. 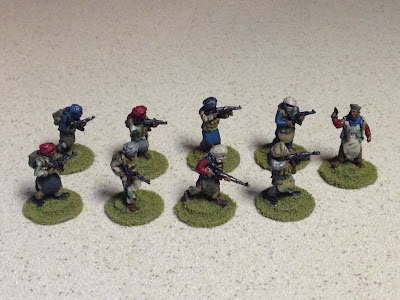 The whole group, nine figures.  These guys are from Elhiem packs "TAL03n Local Afghan Insurgents with AK47s", "TAL23 Tier 1 Talib with AK47s standing skirmishing set B", and "TAL29 Tier 1 Talib Additional SVD, UGL and Person of interest".  As previously mentioned, they can/will be used as both good and bad guys as the government and rebel factions will both have militia troops.

As you can see these are not professional fighters, so while they have plenty of military gear and some uniform items, they are really mixed in with different colors.  The military uniform pieces were confined to some monochrome desert yellows, greens, and tans, while there are two types of camo: desert tri-color, and very faded out US woodland pattern. 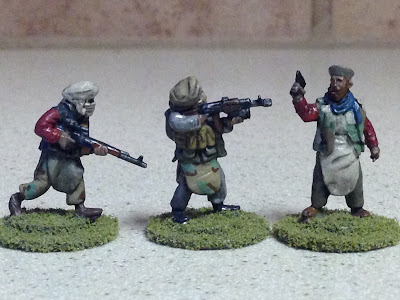 The first three, from right to left: leader, grenadier, and sniper.  The leader has a Woodland camo vest on, while the other two are both sporting a little desert tri-color with their civilian clothes. 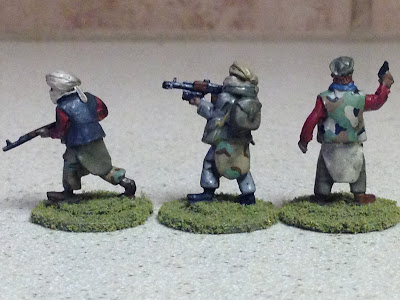 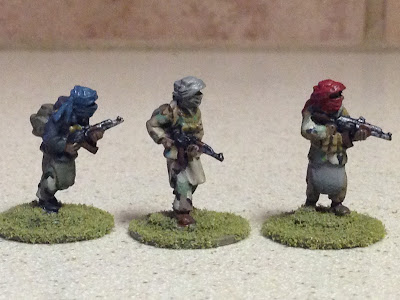 Next three, regular riflemen.  Very well sculpted, the usual Elhiem standard.  I can't really speak to how Elhiem figures compare with other companies; they're so beautiful I haven't even really looked at anyone else's stuff!  As a matter of fact, I've got another order in with them, and soon I'll have another 6 good guys, about ten elite bad guys, and seven or eight lower-tier military (paramilitary/border guard types).   Can't wait to get my hands on them.  For that matter, I want to give a shout at to TMPer "Grunt1861" is helping me out with some terrain for these guys to fight over; thanks a bunch Roger! 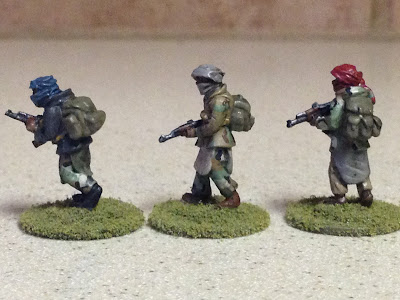 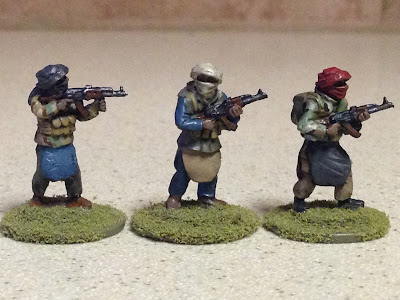 Last three, three more riflemen, only standout being the guy at left has an AK with a foregrip (probably wooden).  Really good sculpts. 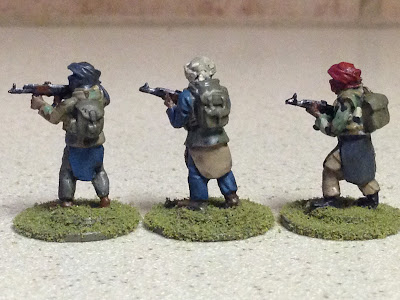 Opposite, you can see the various camo pieces. 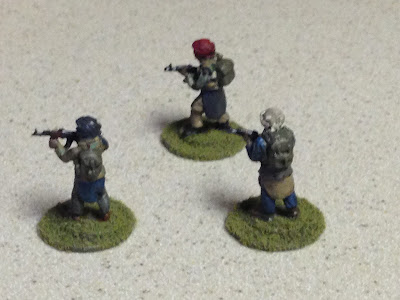 Well, lots more 15mm stuff to post, coming up soon, but that's all my 20mm figures until I receive my latest order.  Thanks for looking, please let me know what you think.