Infantry Complete, Vehicles On the Way

Well, it's been quiet here on the blog the past couple days, but I've been slaving away on my Wolverines project.  Lots of painting, washing, and flocking over the past three days has seen my complete all the infantry bases (as well as the Soviet heavy mortar platoon and AA gun, which are not self-propelled).  I'm also making steady progress on the vehicles, though I noticed I may not have enough of my dark tone wash to do all the vehicles once the painting is completed, so I put in a quick order to The Warstore (went in for a box of the new Battlefront Team Yankee LAV-25s!).  Anyway, here's where we're at. 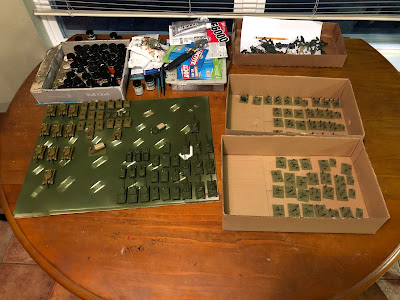 The whole mess: assorted hobby implements at top left and top center, a box of my boys' 54mm plastic army-men at top right, then the project.  All the vehicles are at left (olive drab is US, medium green is Soviet), Soviet infantry at right, and US infantry at bottom right. 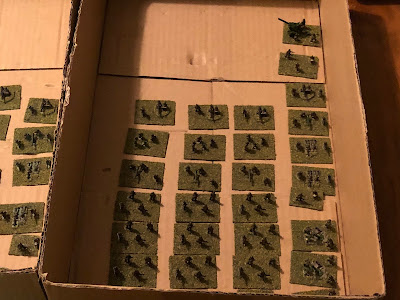 The Soviets, completely cleaned, based, primed, painted, washed, and flocked.  The three even columns (running top to bottom) are the three mechanized infantry platoons, each comprised of a platoon commander, three rifle squads, an HMG, a recoiless rifle, and a medium mortar team.  At far right is their Recon Platoon of Plt Cmdr, two rifle squads, an HMG, and a recoiless rifle team.  The Soviets also have three 120mm mortars (bottom right) and an AA gun (top right, with the Company Commander just below it).

Don't worry, I will post better pics once the whole project is completed. 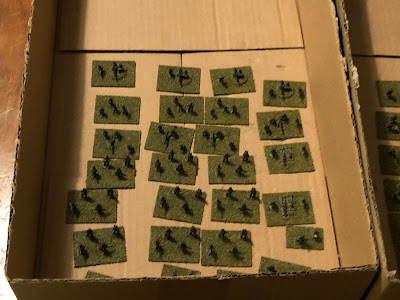 And the Americans, set up the same way, minus the three heavy mortars and the AA gun. 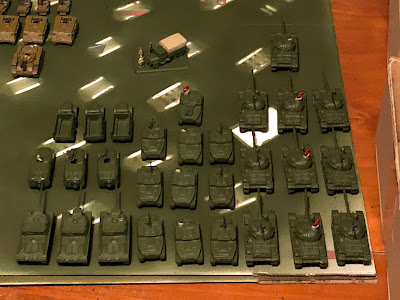 Making progress on the Soviet vehicles.  The red you see is four different vehicle commanders popped out of their hatch, holding signal flags. 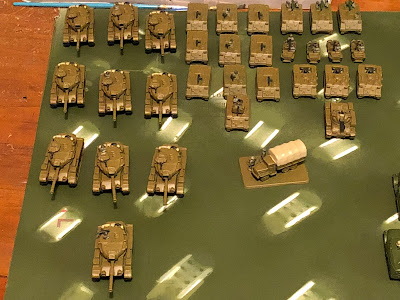 And the US vehicles, showing some work done.

I'm getting close, I can feel it!  More to come soon, I hope!