And They are Primed and Ready

First, let me say that I'm utterly despondent after seeing the @#$%ing Patriots beat the Jaguars, and knowing they're going to another Super Bowl and are likely to win it.  In any case...  I was able to take advantage of the great weather this weekend and my Cold War Soviet invasion of the United States (I'm calling it my "Wolverines" project) is moving full speed ahead.  Last week I received the toys, got them cleaned, assembled, prepped, and primed.  Here's a quick few photos to document the progress. 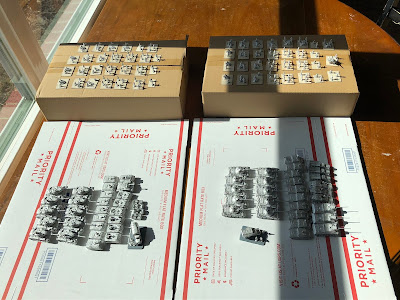 Owing to the beautiful weather this weekend, I was able to take this... 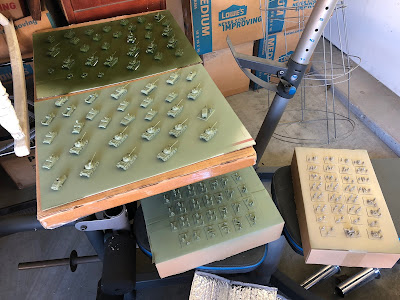 And turn it into this.  Top left is US vehicles, center is Soviet vehicles, bottom center is US infantry, and bottom right is Soviet infantry.  Gotta love Walmart Krylon spray cans.  And forgive me, all that sunlight has washed out the colors a bit!  In any case, I've made the executive decision to, as I quite often do, throw together some cool paintjobs that aren't historically accurate.

I'm aiming for early 1960s, which means the US and Soviet vehicles should be plain green, distinguishable from each other only by a couple shade's difference, and all the grunts should be wearing green, too.  But here's what I'm going to do: You can see I sprayed the US vehicles a darker shade of green (Testor's can of medium green), and I'm doing this in preparation to do some ahistorical MERDC on the US vehicles.  The Soviet vehicles I've left Krylon green; I'm going to throw some Blue Tac on them they're going to be Krylon Green and Krylon Desert camouflage.  The US infantry are going to stay Krylon Green uniforms, but I'm going to paint camo helmet covers on them, and the Soviet infantry are going to have Krylon Khaki uniforms and I'll paint medium green helmets on them. 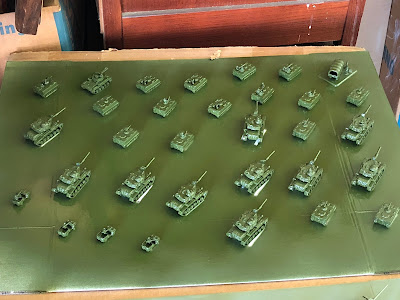 The US armor, sprayed medium green, gonna Blue Tac them and spray OD.  I keep talking up the Blue Tac like I'm an old pro; this is something else I've seen guy on the internet do but I've never done, this will be the first time.  Wish me luck! 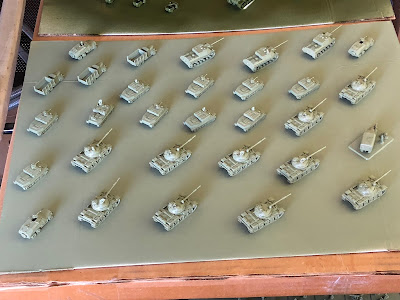 The Soviet armor, again, the sun has totally washed out the color.  I apologize; in reality, it's a medium green color, if you read my painting posts and my batreps, you've seen it a million times. 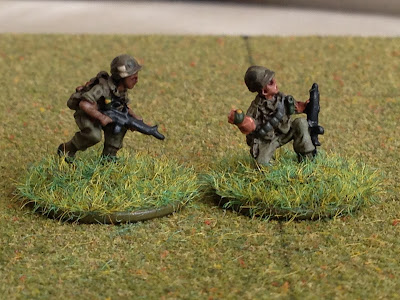 The uniforms in this picture are that Krylon green. 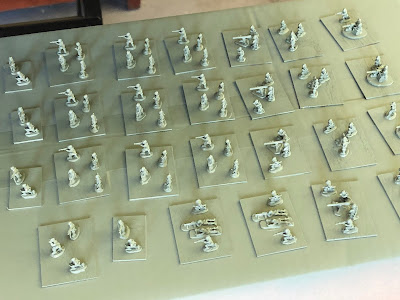 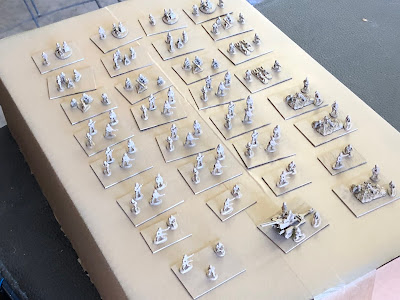 And the Soviet infantry.

Now to get it all to the painting table.