Tonight I slapped together all the American vehicles from my Pendraken Cold War project.  Here are some pics.  I'm hoping to get the Soviets slapped together tomorrow night and the infantry taken care of Thursday.  Then I need some warm weather (it's @#$%ing 13 degrees here in Texas right now, ridiculous!!!) so I can get them spray primed.  I apologize, it's tough to see detail in the photos since these are bare metal, but I wanted to share. 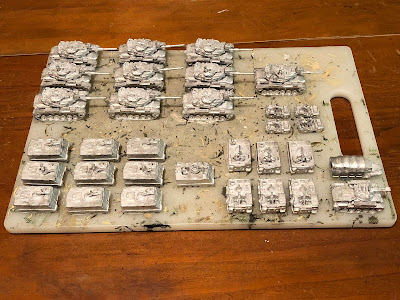 The whole mess: a tank company, a mechanized infantry company, a recon platoon, a heavy mortar platoon, a tank destroyer platoon, and a HQ element of a Deuce and a Half and an M-42 Duster AA vehicle. 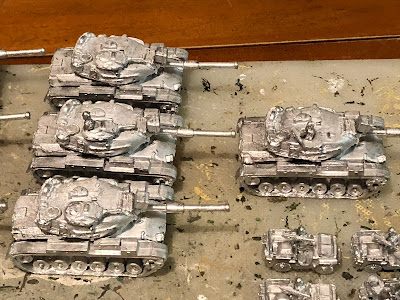 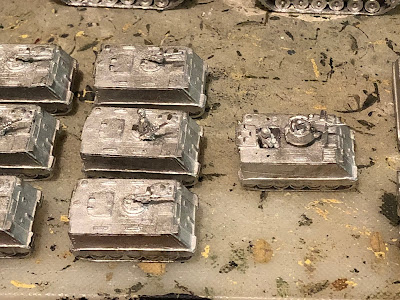 One of the Mech Platoons and the Mech Company Commander.  Again I added a vehicle commander figure to denote the platoon commander, and I bought an ACAV, but didn't add the side M-60s, to use as the company commander. 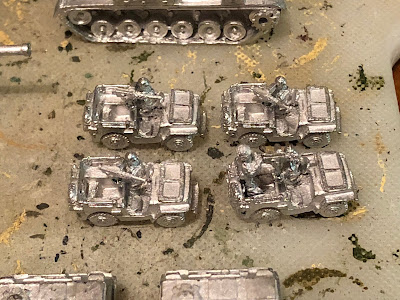 The four-jeep recon platoon.  At bottom right you can see I used one of the ACAV's crew figures in the back of the jeep to denote the platoon commander. 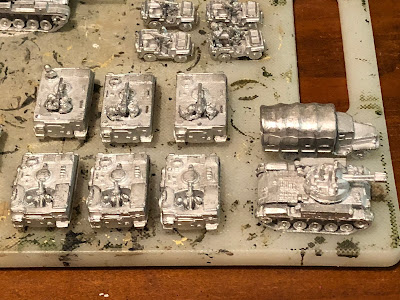 Bottom left is the heavy mortar (106mm) platoon, above them is the tank destroyer platoon, and at bottom right is the deuce and a half and Duster. 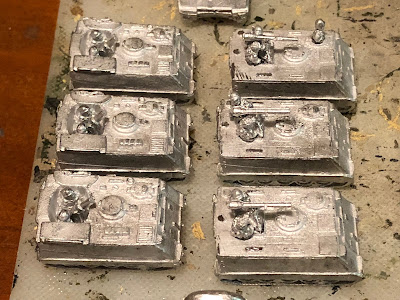 In any case, that's the US vehicles, need to get the Soviets done, and they will match up with the Americans:
-Tank Company in T-62s
-Mech Infantry Company in BTR-50s
-Recon Platoon in BTR-152s
-Heavy Mortar Platoon (3 x 120mm mortars transported by trucks)
-Tank Destroyer Platoon (ISU-152s)
-HQ element with truck and towed AAA