And Now for Some Crunchies

Tonight I got all the infantry from my Pendraken Cold War project cleaned up and prepped for priming, here are some pics, but they're not totally ready.  I'll explain below...  In any case, I really need some warm weather so I can get everything spray primed.  I apologize, it's tough to see detail in the photos since these are bare metal, but I wanted to share. 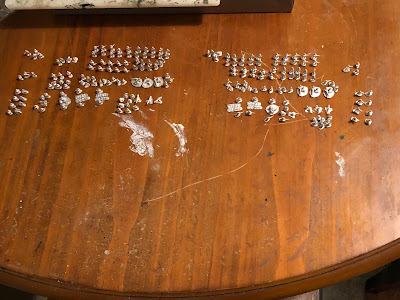 Here's the whole mess, Soviets on the left, Americans on the right.  The two forces are 99% comprised of Pendraken Argentinians from their Falklands range, and are about 99% identical.  The Soviets have a few extra dudes for their towed AA gun, three 120mm mortars (the Americans have self-propelled mortars), and a different guy in their battalion command stand, but the rest is identical. 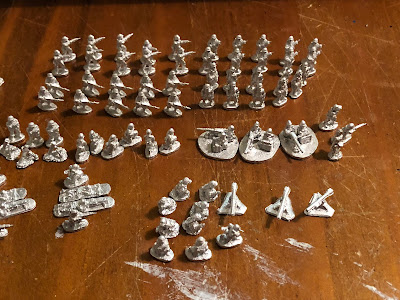 Each side has an infantry company and a recon platoon.  For the rules, each base will be an infantry squad or weapons team, so the infantry company is composed of a company commander, three platoon commanders, nine rifle stands, three mortar stands, three HMG stands, and three recoiless rifle stands.  Weapons Platoon (three mortars, HMGs, and rec rifles) will be parceled out to the rifle platoons, so each rifle platoon will consist of the platoon commander, three rifle squads, a mortar, an HMG, and a rec rifle.  The Recon Platoon has a platoon commander, two rifle squads, an HMG, and a recoiless rifle. 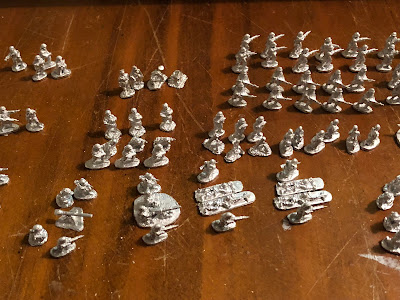 The top left guys at top left are the AAA crew, just below them is the company commander, just to their right are the three 120mm crews.  At top right is the infantry company riflemen, and across the bottom is the recon platoon.  At top center is the battalion commander. 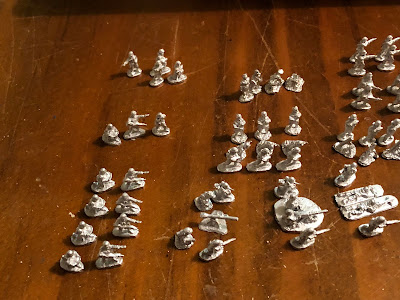 At bottom left are the platoon commanders. 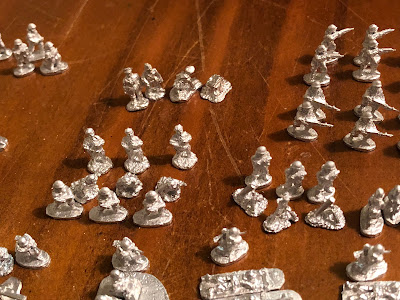 Another look, the battalion command figures at top center. 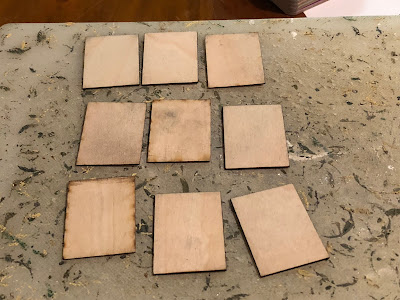 And here is my big problem, why the grunts ARE cleaned but ARE NOT ready to be primed: I didn't think ahead to buy bases for the infantry...  Oh well, no sweat, it'll help me focus on getting the vehicles taken care of; I HATE painting vehicles.  Anyway, just got my order in to Litko for some more bases.