15mm WWII Australians for the Pacific

Keeping it rolling with some Aussies, for my guys Shaun and Jimmi down under (undah?).  I had bougt some Aussies and Brits off a gentleman on Ebay and from Gajo Minis, in the hopes of filling out my forces for the Western Desert, and ended up having more than I needed, so I decided to take the extras and see if I couldn't scrape out an Aussie (or even British) force for use in the Pacific.  I'm not really happy with the fact I painted their bases a desert yellow, I wish I'd gone with a medium shade of brown, but the problem is I'd already done my US Marines and Japanese with sand-colored bases, which is good for those tropical, desert-isles, but not so good for the lush jungles of New Guinea, Bougainville, Malaya, etc...  In any case, that's what I did, and that's what I've got, so I'm happy with the force, other than that.

These guys were already painted, except it was for the desert, so I actually conscripted my 12-year old son to help me modify them a bit and paint their bases.  He did a good job, despite how long it took him, and I just came in and polished them off (sanded the ones that needed to be sanded, applied the inkwash, applied the static grass, and did the matt spray). 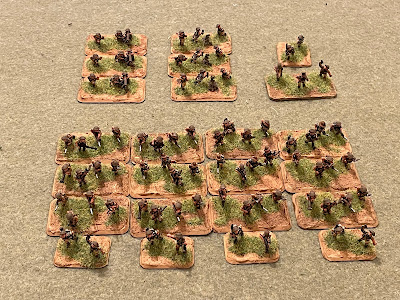 Yeah, it's smaller than my other forces, and doesn't have enough command stands, but hey, it was scratched together from leftovers ;) 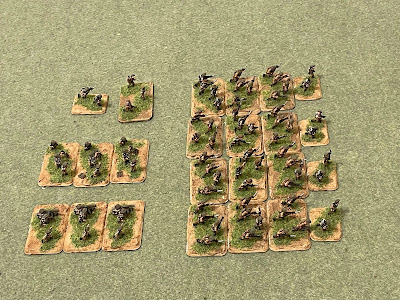 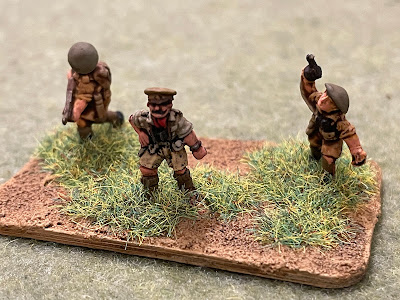 A look at the Commanding Officer, or Officer Commanding, however you Commonwealth folks refer to it.  I did the base job, but this fine specimen of a commander was painted by a gentleman off Ebay, and my son just worked some cleanup.

I'm having a hard time remembering what I had my son do; I want to say the uniforms were a very pale color and I had him do them in desert yellow, and I had him do the socks an olive drab color, and paint the helmets green, maybe the backpacks, too? 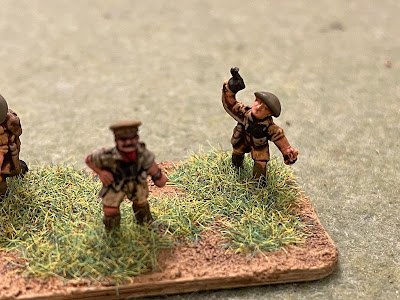 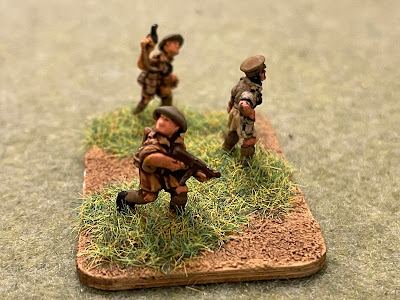 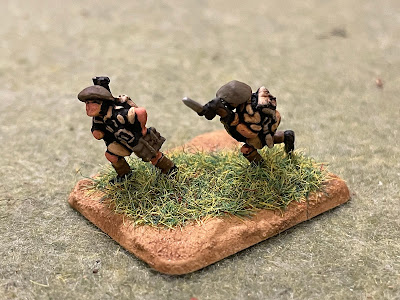 The XO or FO stand, pulled from two leftover infantrymen from Gajo Minis (I can tell because of the blacklining painting method, and I didn't have the boy change them, for some reason, though he did do the helmets and socks). 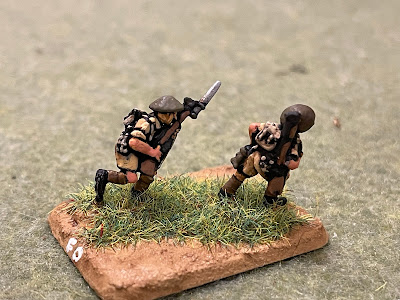 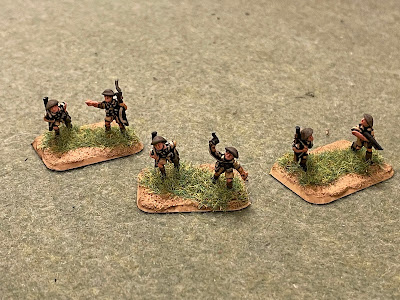 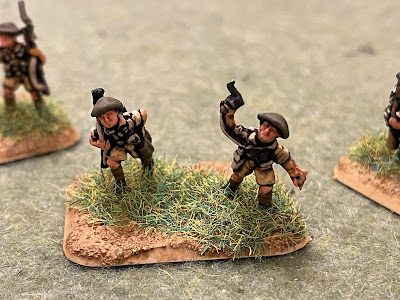 A closeup.  Look at the size of that Webley! ;) 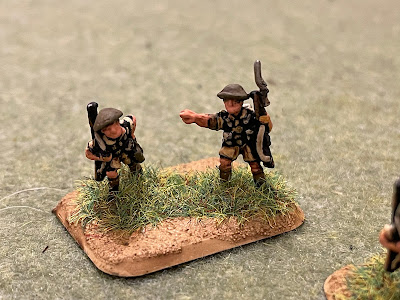 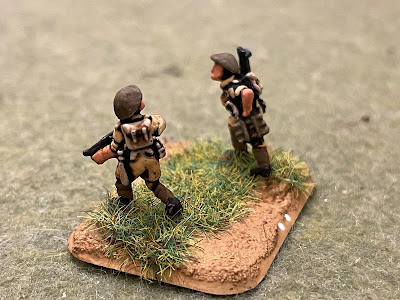 And one more.  Note the paucity of bush hats... 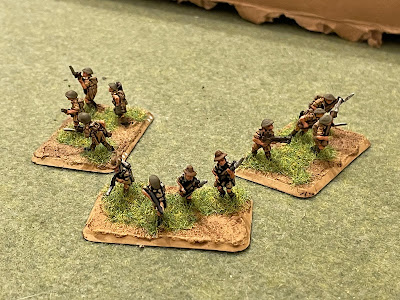 A look at some of the rifle stands. 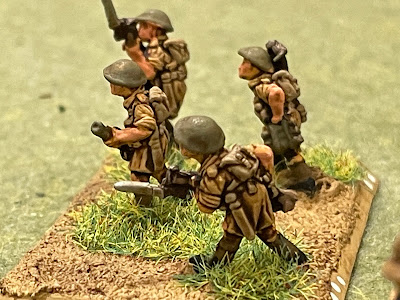 Four dudes in helmets, including a guy carrying a 2" mortar!  Making do with the extras... 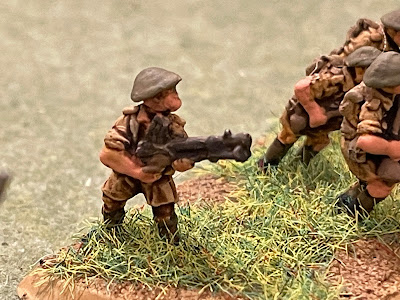 Closeup of a Bren gunner. 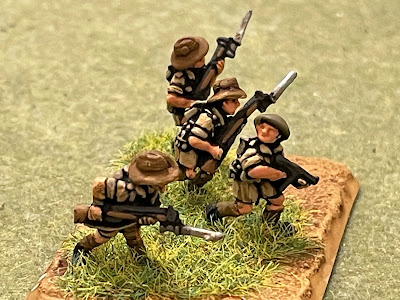 These guys are Gajo Minis, and I have no idea why I put three bush hatted-dudes on one base...  Someone should be fired for their horrible planning skills. 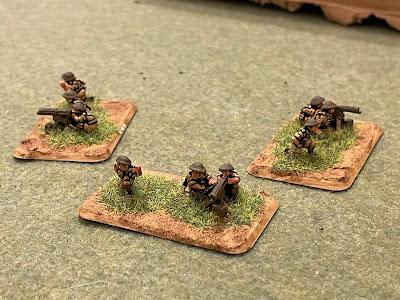 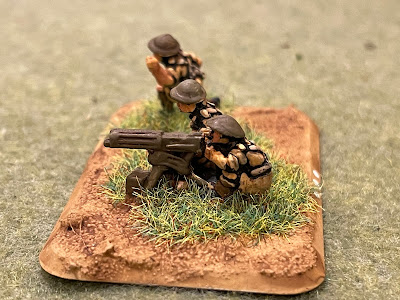 A closeup.  The whole force is Battlefront metals. 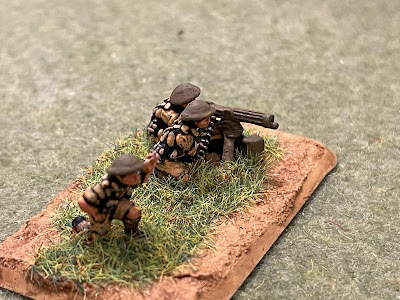 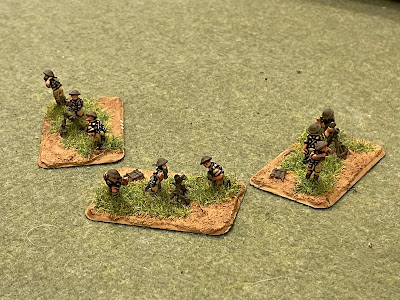 And the Mortar Platoon. 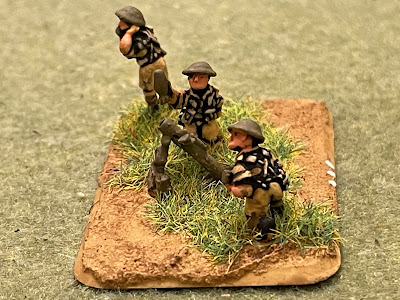 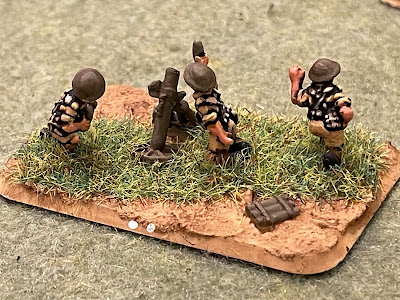 So that's them.  A decent little force, I hope to get some use out of them, just gotta find time to get through all the campaigns I have planned.  More forces on the way.