Here's the troops next up on the posting block: Elhiem 20mm Modern German infantry and KSK.  I bought three packs, but stole two figures out of the group to move over to the good guys.  What do I mean 'good guys?'  Well, I'm gearing up for an Imagi-Nation campaign in the Balkans, and I needed bad guys.  Modern Germans are definitely good guys, but I don't have any wargaming use for them.  But, looking at pics online, I absolutely love the figures, and so I picked three packs up to be Serbian Special Forces, most definitely bad guys in my campaign. 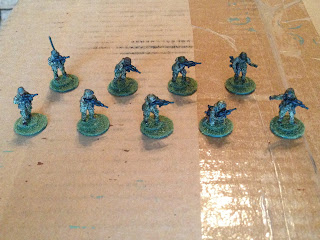 The whole group of nine men; four have helmets, four have balaclavas/shemaghs, and one has a soft cap.  Done up, once again, with my very humble basing consisting of green flock on pennies...  Let's get to the figs, which are, as usual with Elhiem, absolutely beautiful. 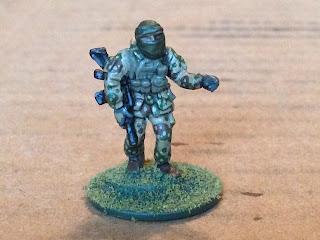 Well, the lighting is much better than previously, but it seems to wash the colors out a little.  I did up sort of a German 'ambush' pattern (apparently they wear something similar today in Afghanistan), with a desert yellow base, a dark brown, and a dark green.  The green and brown don't look much different here.  Anyway, a great looking figure. 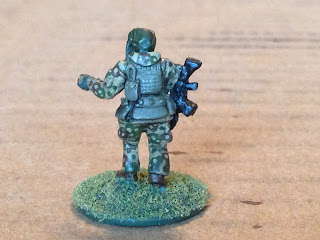 Reverse.  He looks to have an MBITR radio on his left hip, and I see that I failed to paint the antenna black... 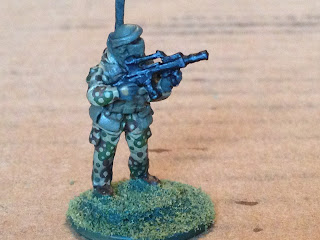 A guy carrying some sort of manpack radio (can't see it, it's in his pack).  All the Germans have G36 rifles, which I always thought looked cool (never got to fire one). 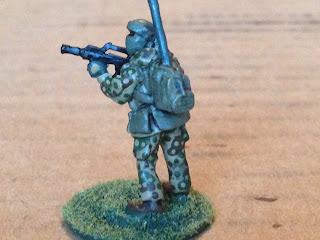 Reverse.  I'm sure someone will point out how thick the antenna is, but I get it, you have to sculpt it that way so it doesn't get broken off. 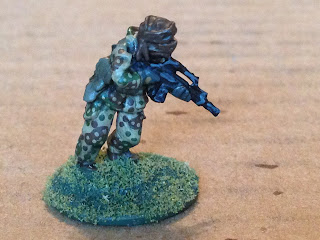 A guy moving forward in the alert carry. 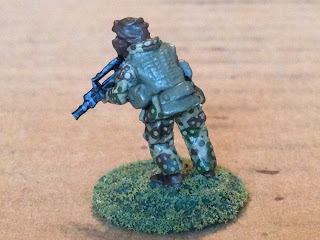 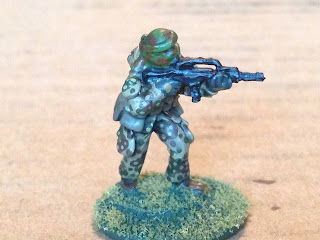 Rifleman at the ready carry, staring over the sights as he moves forward. 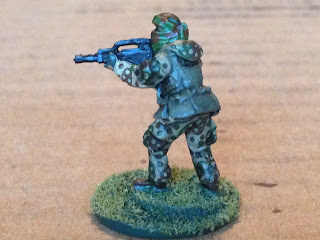 Reverse.  After doing up all the good guy Special Operations guys in motley clothing, it's nice to do a group in the same uniform.  But a pain in my ass to do this camouflage, though I think it was worth it, really looks cool. 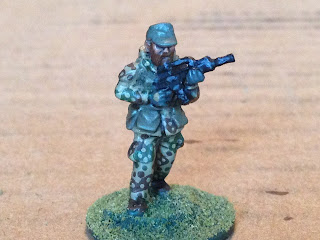 Rolf in the soft cap. 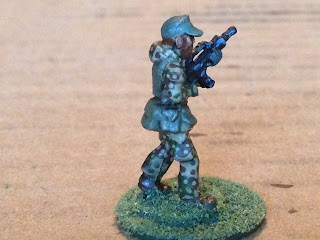 Another shot to see that red beard. 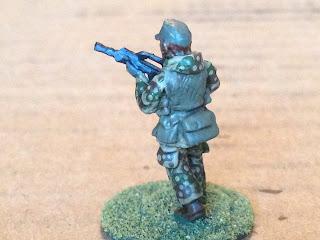 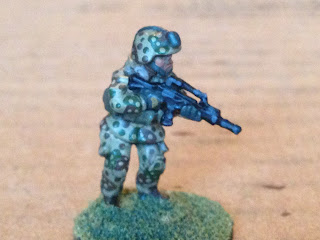 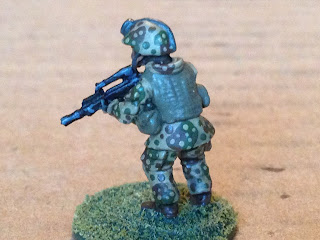 Reverse.  I really love the way the helmets are sculpted, I like the way they sit on the head, looks realistic to me. 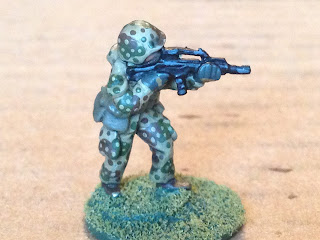 Next rifleman, sighting in.  The older of my two sons kicked this group, and I see metal showing on his left foot.  There's another spot coming up... 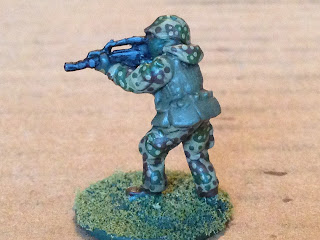 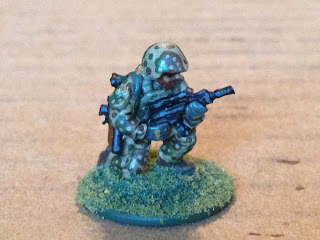 A grenadier, kneeling.  When I say grenadier, he's not your typical modern grenadier.  Rather than having an underslung grenade launcher on his G36, he has a whole separate weapon slung over his right shoulder.  Looks to be a single shot, break-open weapon like our old M-79. 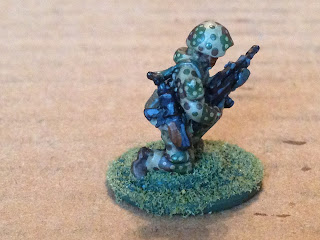 Here's a not so great look at the grenade launcher. 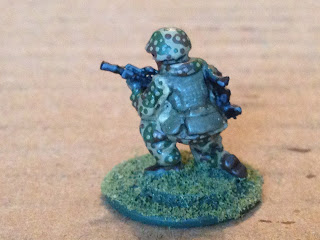 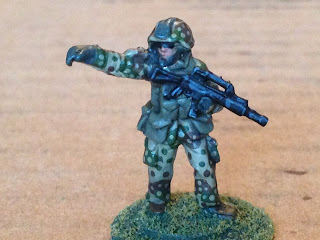 And the last guy, hailing a taxi.  Just kidding, I love the pose, and I figure he must be the boss.  "Fellas.  Fellas.  Over here.  Fellas, you simply must listen to me.  Ugh!  Enlisted swine."  Sorry, that was childish of me...  And here's the other spot of bare metal, just below his chin. 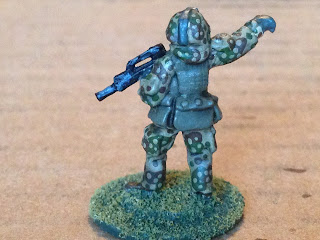 And that's my bad guy Serbs, the "Tigers."  Hopefully they don't rough me up too bad.  More to come.  I'm really just posting this to let everyone know we've taken a bad turn; my campaign won't start this weekend as we've had a death in the family and we're working on the arrangements.