Next up in my 15mm forces for the Modern Middle East, how about some British Royal Marines!  I didn't know what to do with these guys when I bought them; don't even know why I bought them, just thought they looked nice so I picked them up.  Anyway, I didn't have a need for them, and I was looking around at stuff like Sangin and Basra, so I figured I'd do them up desert style, in desert DPM.  Forgive me as my camo is rather humble here, but it was quick and easy, and looks pretty good at tabletop distance. 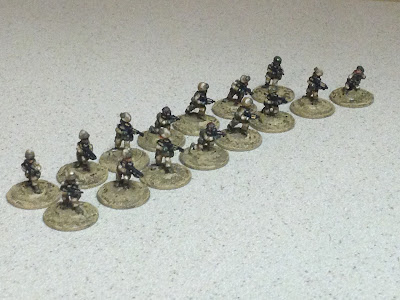 The whole pack of 15 Royal Marines.  A mix of weapons, with an assortment of helmets, berets, and even a couple bare-heads. 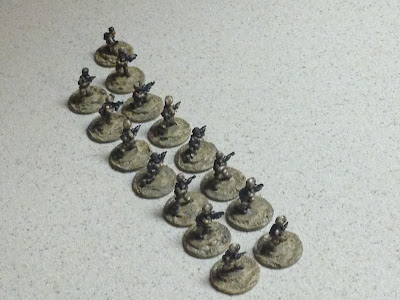 Another look at the whole group.  Pretty humble basing, just stuck them to pennies, threw some sand on them, painted it, and gave it a wash.  Not too bad I hope.  Let's get to the poses. 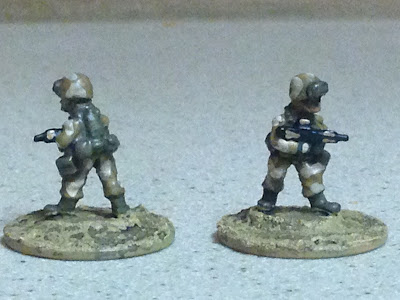 First man up, a rifleman with SA80.  I'm not all that happy with my choice of color for the furniture on the rifles, but I needed a color that stood out from the uniforms. 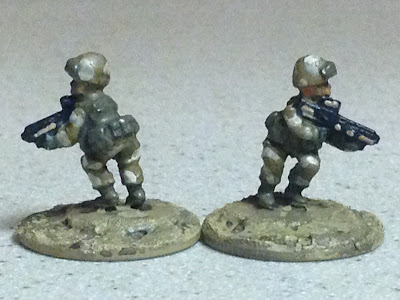 Next up, a grenadier with SA80 UGL. 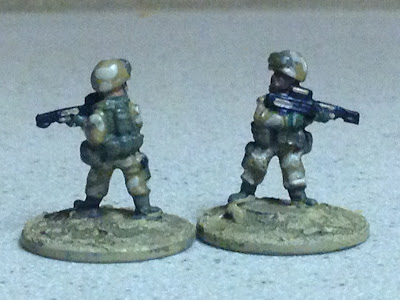 An SA80 LSW trooper.  The muzzle was actually a bit longer and I trimmed it down.  Not sure which is realistic, but the other just looked too long to me. 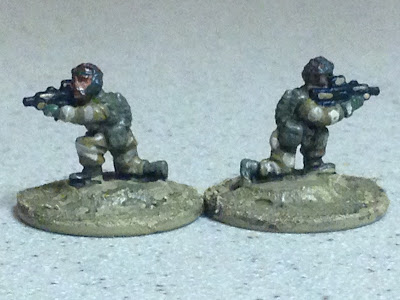 Two guys with SA80s, no hat or helmet.  They actually look to have the headgear for the old intra-squad radios on. 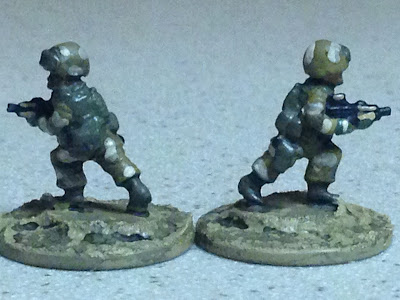 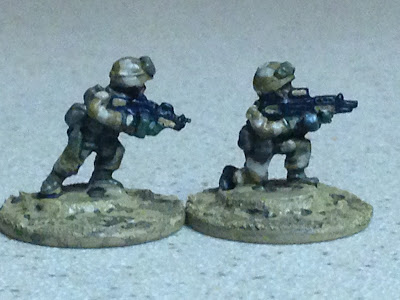 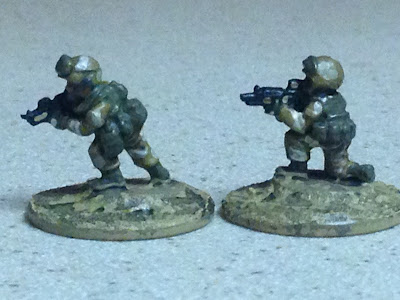 For those that recall, I talked in my Modern USMC of having a Brit looking guy, and the guy at left, to me, is an American looking guy.  But I didn't mix them up, and the proof is that this guy is the same size as the Brit Marines, which are slightly larger than the US Marines. 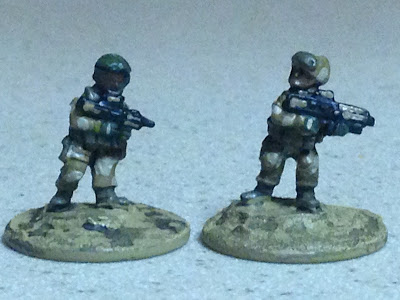 Next up we have another Marine in beret (with SA80), then another SA80 UGL.
Here you can see the left-hand 'chap' has dark skin, as, once again, I made my platoon of three different shades of skin tone. 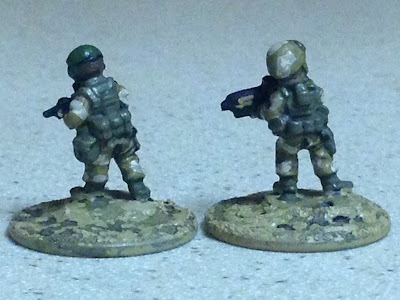 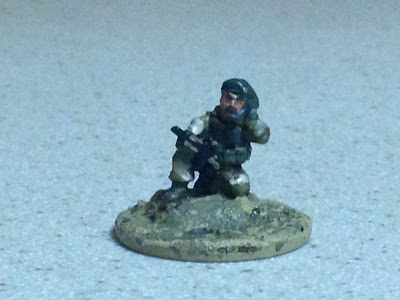 And the final pose, a guy in beret with SA80 and a radio on his back.  My pics suck so I'm not sure you can see it, but I love his mustache! 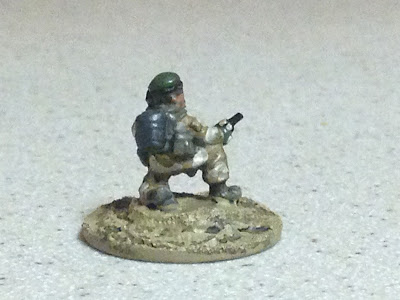 Well, that's all my Royal Marines (in 15mm, at least, got a bunch in 10mm!).  I may buy another pack at some point, just to have a 30-man platoon, but this will do for now.  They'll probably see the tabletop pretty soon in South Leon ;)   If you're not familiar with South Leon, you need to head over to: http://cubalibrewargame.blogspot.com/2015/12/south-leon-on-slow-ride-down-aka.html

Now for some bonus material.  Okay, not all that bonus, you saw these guys before in Cuba Libre's War of Liberation, but I finally put a wash on their bases and photographed them. 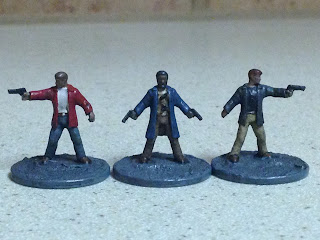 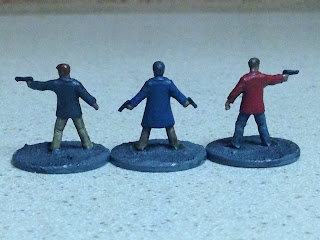 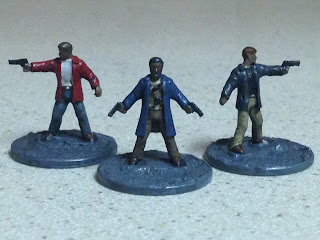 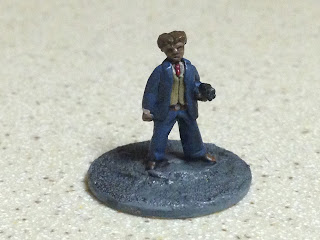 This guy is also Rebel Minis' 15mm, from their "Pulp Heroes and Villains."  He had a lot more hair,  I shaved it down some. 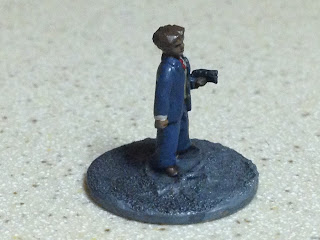 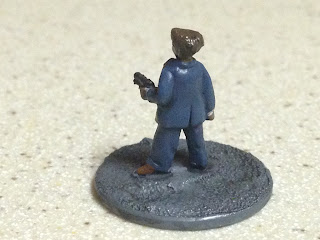 Well, that's that, last of the 15mm stuff I've got finished, with plenty more on the painting table.  But I've now transitioned again: for Team Whiskey I was 100% gaming, after I've been 100% painting, and now I'm looking at 80% gaming/20% painting (I've got a new project to work on).

And this got me to thinking.  If you're not aware, I created another blog, one that focuses solely on my Cuba Libre saga.  And Rod's whining on TMP about "all Cuba Libre, all the time," (just joking Rod) made me realize I'd better explain.  This blog, blackhawkhet, is not dying, not going anywhere.  Right now I'm pretty focused on Cuba Libre; indeed, I've just started a skirmish campaign in the Balkans, and I'm about to embark on a platoon-level campaign in Africa, so my Cuba Libre blog will be going like gang busters for awhile. So, for the short term, blackhawkhet will be more of a painting blog, while Cuba Libre will be my gaming blog.  But, as all you gamers know, at some point the worm will turn, and I'll get back to stuff on my blackhawkhet blog, like KG Klink, Team Whiskey, All Americans, In Country, Bag the Hun, C&C Napoleonics, or something not even there yet!

So don't fret, we're moving ahead at full speed, just do your best to hang on.  Along those lines, I've already played the first two fights of my Cronistria campaign and I'm working on the write ups for your viewing pleasure, they'll get posted this week.  Oh, if you're not familiar with Cronistria, you need to head on over to:
http://cubalibrewargame.blogspot.com/2015/11/cronistria-cries-for-help-aka-next.html

More on the way!