So yesterday I showed ya my dogfaces for North Africa, Sicily, and Italy.  I hope you were sufficiently joyed and awed at the sight of them, and surely you found yourself wondering, just who might they be facing off against? 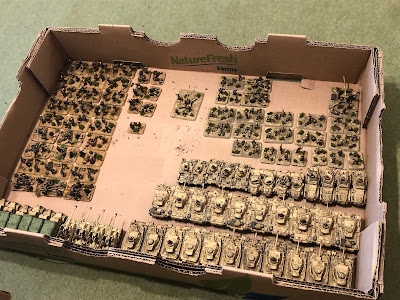 Well, I do have a few Germans for North Africa... 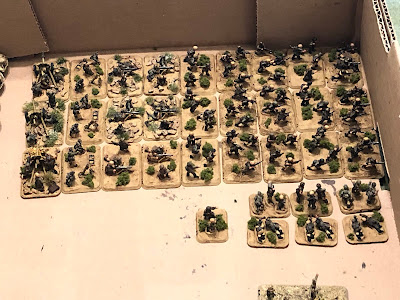 And I have added to them a bit.  I still have a lot more lying around unpainted or primed, waiting to be finished, but I've got a little something ready to kick off the festivities. 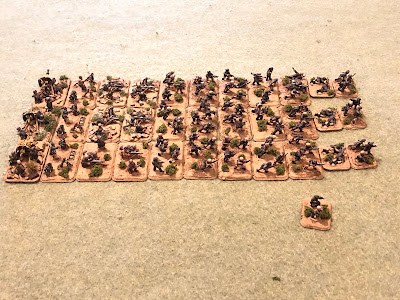 And this is them, a three-battalion regiment of Fallschirmjaeger, ready to rock and roll in the dusty, arid environs of Tunisia, Sicily, and southern Italy.  As with my British, Germans, and Americans, this regiment is built out in accordance with the tables of organization for Rapid Fire Reloaded.

Each battalion consists of a command stand, a 50mm mortar, five rifle stands, two machine gun stands, an 80mm mortar stand, and a 37mm PaK-36 anti-tank gun.  My Afrika Korps force already has 50mm PaK-38 ATGs and 88mm Flak-36 dual-purpose guns, as well as various trucks, armored cars, and tanks,  I can press into service in support of these German hunters from the sky.  There is also a single forward observer stand (bottom right).

And Martin, please don't hate me/beat me up, these guys are anything but uniform, I went full 'band of gypsies' on them.  Hardly befitting an elite fighting force, but I just couldn't help myself ;)

So, I acquired these FJ thusly:
-All the rifle stands and a couple command stands were bought off EBay, painted and based for early war in gray-green.  I pretty much repainted the figures and bases completely, just leaving some of the gray-green showing on some of the figures.
-Four MGs, two PaK-36s, and a command stand were bought from a different person off EBay, painted and based for the desert.  I barely had to touch these guys, they were already beautiful.
-Two MGs were bought new from Miniature Market then painted and based by me.  They are the new plastic figures and much bigger than the older metal figures making up the vast majority of the rest of the force.
-The three mortars were bought painted in late war winter colors from Gajo Minis, then I repainted them and based them for the desert (I had them as left overs from my Battle of the Bulge project).
-One of the PaK-36s I had lying around from a Plastic Soldier Company early war heavy weapons set, so I painted it up and based it.  It doesn't look too bad, but the figures are much smaller than the rest of the force (and particularly the new plastic MGs). 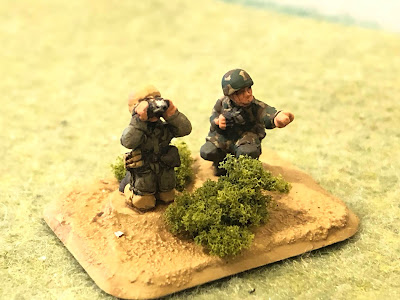 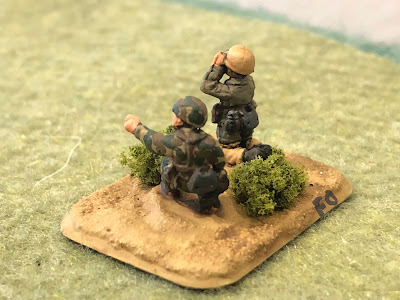 Another look at the FO stand.  I know the camo isn't perfect, certainly too dark (I used the Battlefront Vallejo beige, green, and brown), but I don't mind it.  Oh, and I had to scrape some grass off the bases, paint them yellow, and add some clump foliage to most of the stands. 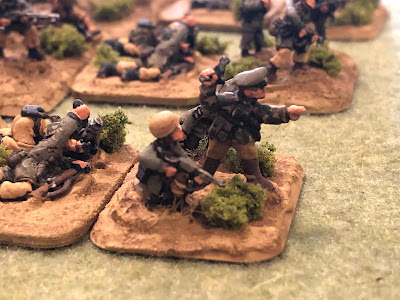 A look at one of the command stands.  Hmmm, guess I forgot about another source of acquisition: these were guys I had lying around for years and conscripted into service here when I found I was a few figures short. 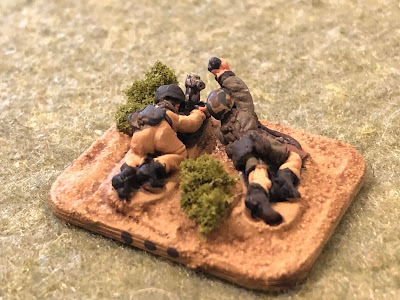 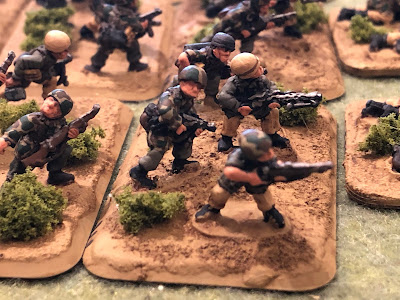 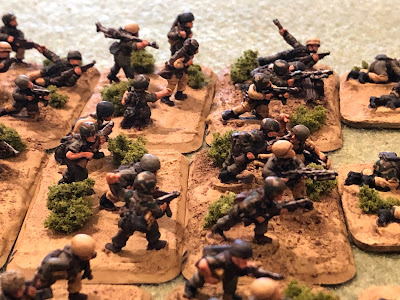 More rifle stands.  I really love the character of the old Battlefront metal figures.  On a side note, you can actually see a chap carrying an anti-tank rifle on the stand at top left center. 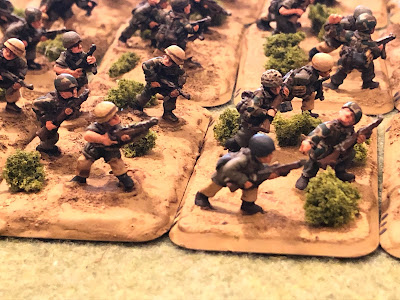 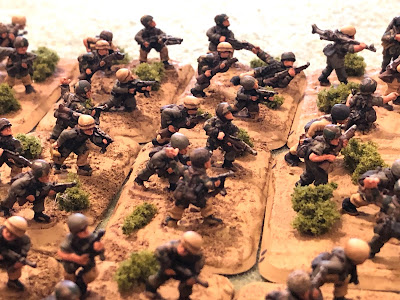 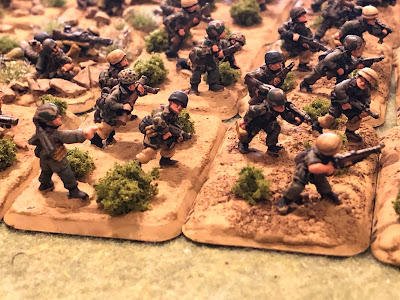 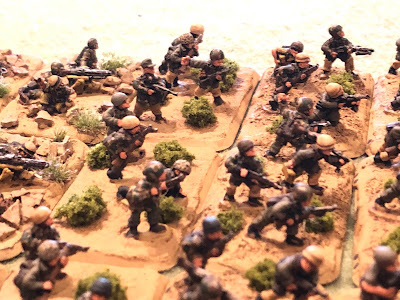 And the last of the rifles, with a couple MGs visible at far/top left. 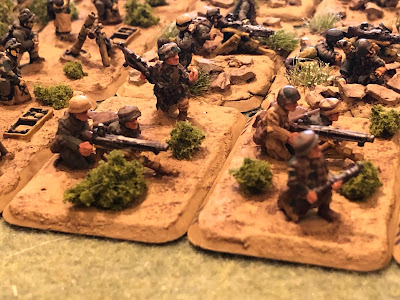 The two MG teams in the foreground are the new plastic Battlefront figures I did myself. 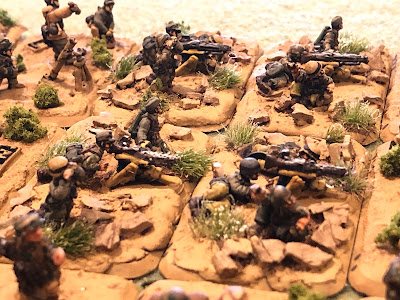 While I pretty much didn't have to even touch these four MG stands.  I love the rocks and flowers on the bases, and I really love the posing of the figures. 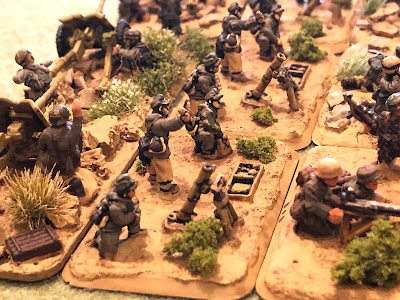 The mortar teams.  Again, these guys were painted by Gajo Minis for the snow, and I just kinda dabbed'em up a bit for the desert ;) 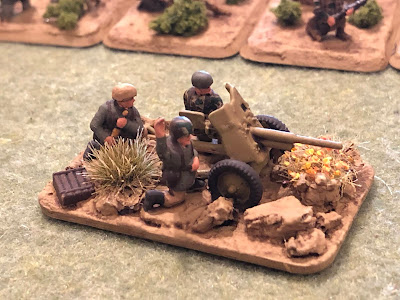 The Plastic Soldier Company PaK-36 ATG I did myself.  Serviceable, but certainly not winning any awards.  I had some rocks lying around for the base, but stole the flowers off some of the other bases I bought off Ebay! 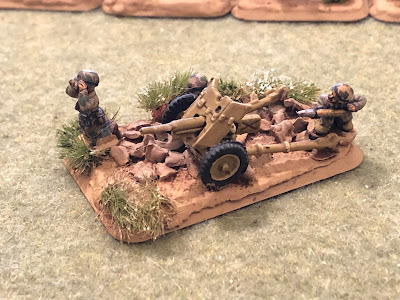 Here's one of the ones I bought off Ebay, looking really nice. 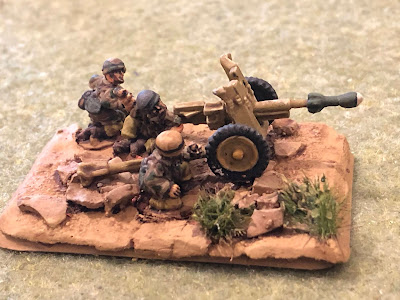 And here's the other, with the little rocket projectile on the barrel (sorry, should know what this is called but I'm too tired to look it up right now). 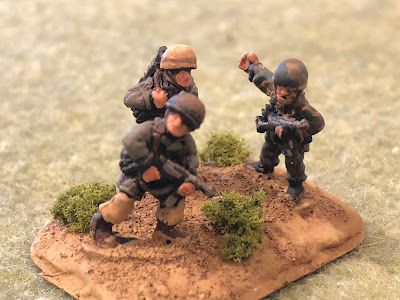 And to close it out, one more closeup of an early war command stand that I modified for the desert. 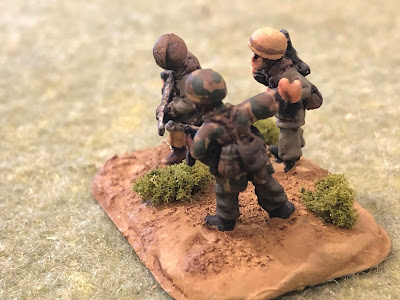 So there's my FJ set to face off against my Yanks, need to get off my butt and finish up all my Western Desert stuff.  But one more giant force to post up and show off, which I'll post tomorrow.  I believe (hope) you'll be duly impressed ;)