10mm Germans and Canadians for the Mediterranean

Well, I was perusing t'internet the other night, and it got me ta thinking.  Thinking about Crossfire.  I spent quite a bit of time on quite a bit of blogs, but mostly this one:
Steven's Balagan, http://balagan.info/crossfire

Lots of really cool stuff on Crossfire.  It got me pining for the rules again.  When I first became a wargamer back in 2009, I bought two sets of rules: Crossfire, and Blitzkrieg Commander.  But Crossfire just didn't really seem to work out for me; I played a few games with buddies (non-wargamer types), and then my father (converted wargamer) and I played a bunch of games, but it just didn't work out.  We were both way too cautious, way too afraid to go for it, too worried about losing the initiative, and so we had some extraordinarily boring games.

But reading the blogs, I started getting fired up about Crossfire again.  The last year or so has seen my seven year-old son and I have played quite a few wargames, almost exclusively 5Core.  I imagine he's like most kids: pretty aggressive.  That aggressiveness, tempered just a bit, could be perfect for some free-wheeling games of Crossfire.  And he could pull me out of my passive shell; rather than scheming to beat my old man, I shall match the boy's aggressiveness.  No cares about winning, just playing for fun, throwing our troops about with reckless abandon.  And learning more about strategy and tactics as he gets older and more capable.

So, now I'm wanting to play some Crossfire, but what am I going to use.  I've got tons of 10mm stuff that I could use.  I've got a bunch of 20mm WWII stuff that needs to be painted, could use that.  Looking at Steven's Balagan blog, I really liked his 15mm setup, and for some reason, I really fell in love with the look of his Germans. 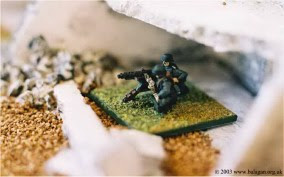 I couldn't find any really great pictures, but here's a pic of the troops I'm talking about.  I don't know what it is; I think it's how dark the gray is, almost black.  I really like them.  I came within a hair of ordering a bunch of 15mm troops.

Then I figured I should stop spending so much damn money on wargaming, at least until the proverbial lead mountain has shrunk a bit.  So, I actually exercised a bit of willpower and didn't buy some new toys; I looked around and found some old troops that I could re-purpose.  Back in August 2013 I'd purchased some 10mm Brits and Germans from Pendraken, and based them up singly (on pennies) for Chain of Command.  I moved through various rules, but played a bunch of games with these guys.

But, with a new (new again, anyway) set of rules, I embarked upon a new project.  I've been wanting to do some Canadians in WWII; I'd have to fictionalize it a little bit, but follow a unit from Sicily to Italy to Normandy to The Netherlands.    So I grabbed these guys: 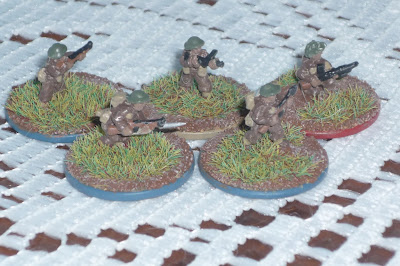 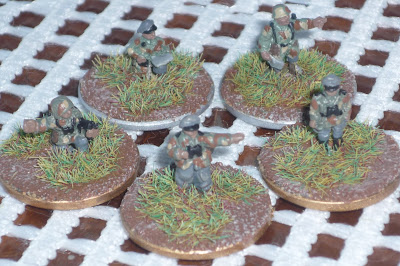 And did a quick re-paint and re-base on them to turn them into: 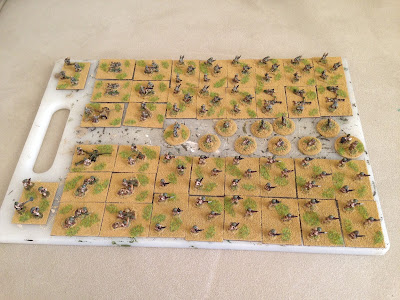 This.  Two equal forces for Crossfire.  Both sides have a Company Commander (on a quarter), four rifle platoons (three squad stands and Platoon Commander on a penny), two machine guns on tripods (Vickers and MG-42s), a mortar (3" and 80mm), two anti-tank stands (PIATs and Panzerschrecks), an anti-tank gun (6-pounder, and I wanted a PaK-38, but had Pak-40s on hand), and one Engineer squad.  Amongst my 10mm WWII collection I've got plenty of other guns and vehicles to use as well, everything from Bren carriers to various armored cars, halftracks, self-propelled guns, and tanks. 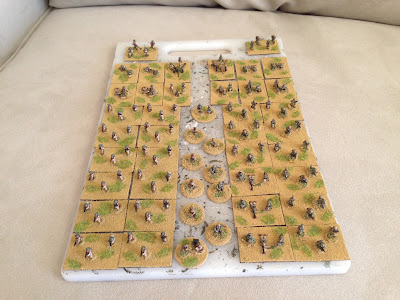 Another look.  For the Mediterranean, I really wanted some dry-looking basing.  I was going to sand and paint the bases, then throw a little static grass on them, but then I found some great looking yellow flock, and it's sooooo much faster than sanding and painting.  I'm pretty happy with the look of the basing. 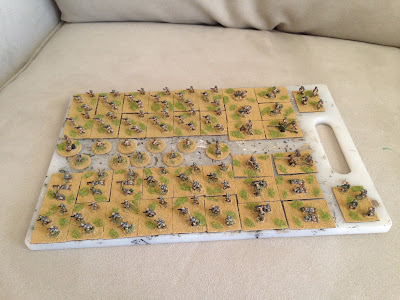 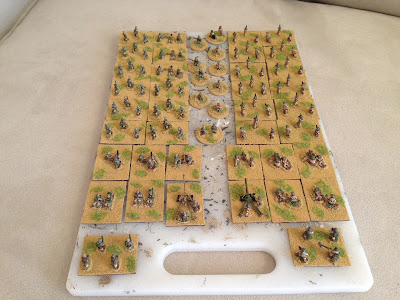 And the backside.  Let's get to some closeups. 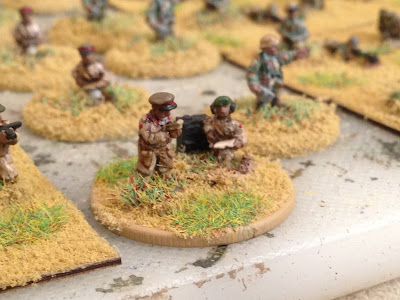 A look at the Canadian Company Commander. 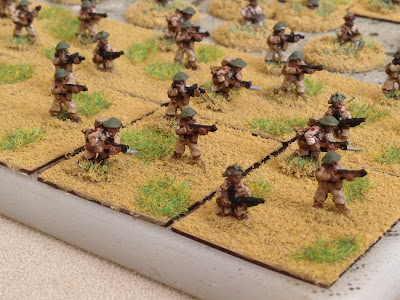 Some Canadian rifle squads.  You can see I went with the lightweight summer uniforms, sand colored (almost white when faded, from what I could tell from contemporary pictures), and I put red divisional patches on each shoulder. 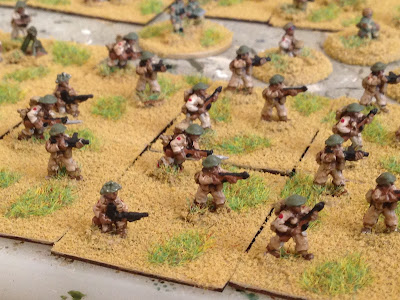 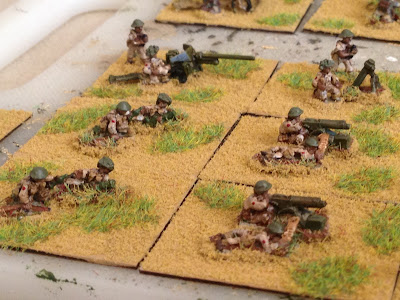 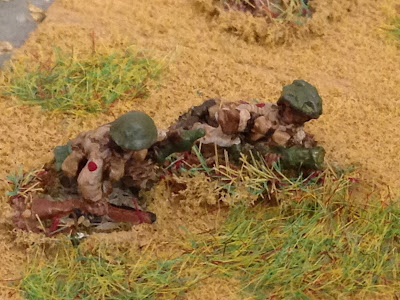 A closeup of a PIAT stand.  Just to show how they can look good from afar, but ugly as hell close up ;) 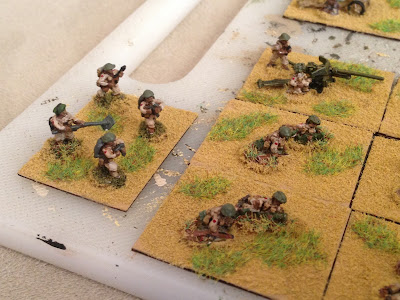 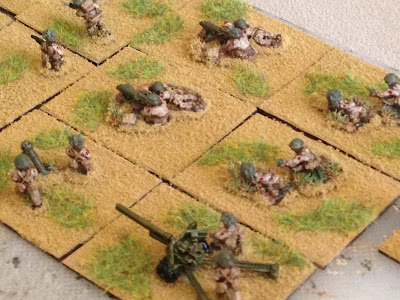 From behind the Canadian heavy weapons. 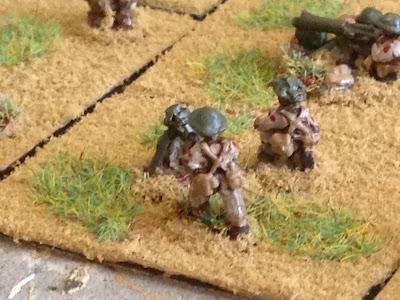 Closeup of the back side of the Canadian mortar team, wanted to show you the web gear. 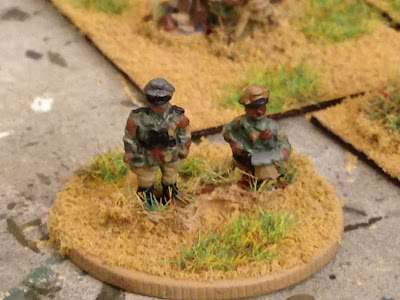 The German Company Commander.  I re-painted the trousers desert yellow, and a lot of hats and helmets got the same treatment.  I left some of the hats field gray, though all the helmets are either desert yellow or camouflage. 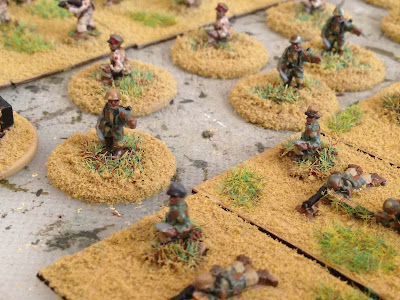 Some German Platoon Commanders (singles) and some rifle squads. 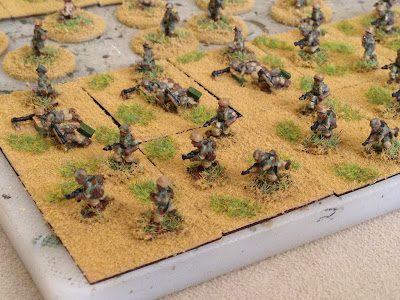 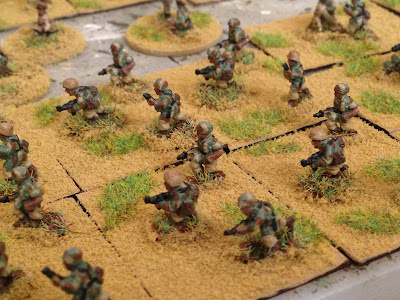 More German rifle squads.  I really like the camo smocks with the yellow trousers and helmets. 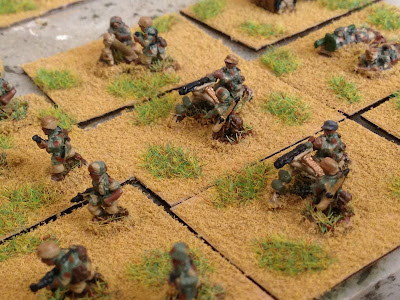 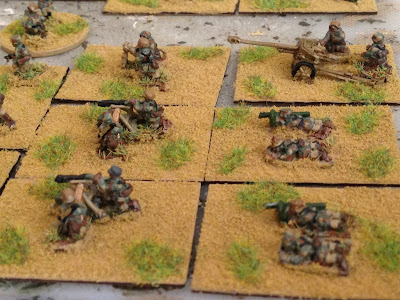 The mortar and MGs at left, with the PaK-40 anti-tank gun and two Panzerscrecks at right. 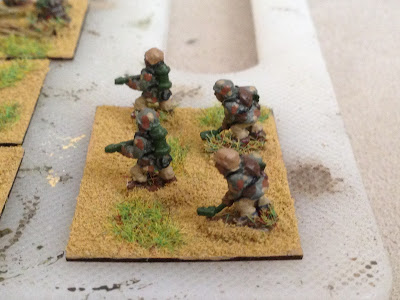 The German engineer stand.  The guys with mine detectors always look like hockey players to me ;) 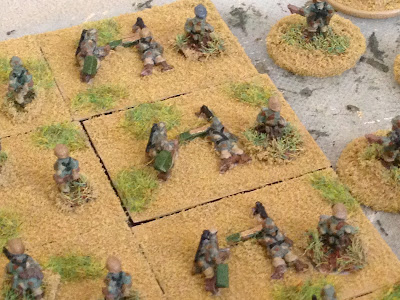 German LMG teams, but just regular rifle squads in the game, with some Platoon Commanders at right. 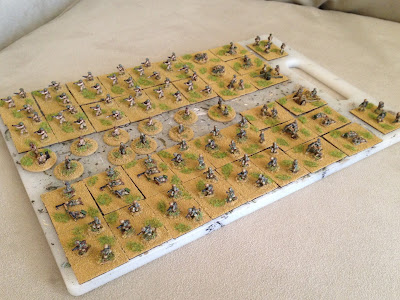 One last look at the two forces, ready to rock'n roll.  I've got one more fight to play out to finish up my US Marines in the Philippines (two still to post), and I've got some modern Special Operations stuff going on for Cuba Libre, but I want to get to Crossfire as soon as possible, start working with the boy on the new rules.