Back to modern troops!  Continuing my fascination with, and desire to get them on the table, I proudly present some QRF 15mm Modern French infantry in temperate camo.  I bought five packs: command, rifles firing, rifles advancing, rifles with AT-4s, and rifles with FELIN gear.  I also bought a 4 x 4 VAB armored car, though it's not finished yet.  I painted up half the troops from the five packs (presented here), and the other half I'll paint up in desert colors.

I ordered direct from QRF (in the UK) and received them in about two weeks; so the price and the speed of receipt were both things I was pleasantly surprised by.  Regarding the sculpts themselves: size and heft-wise they are a bit slighter than Battlefront, fitting in nicely with Peter Pig.  The sculpts themselves can be just a little soft on detail, but you buy them in packs of 8 figures and there are three different poses in each, so a good deal there, and the poses themselves are pretty damn cool.  Pretty dynamic, pretty distinct, good proportions, and it's easy to see what the weapon is and what the guy is doing, so overall I'm very happy with this purchase. 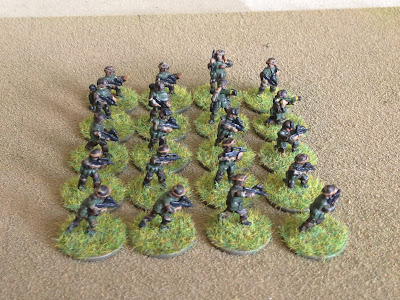 The whole force, twenty guys.  Again, I did them up in temperate camo, something I've struggled with for the French.  I think I finally got the colors right; the pattern has been tough for me to pull off for some reason, I think I did an okay job with it.  They're all based using static grass, on US pennies, as I find myself doing purely skirmish fights in 15mm.  Let's get to the poses. 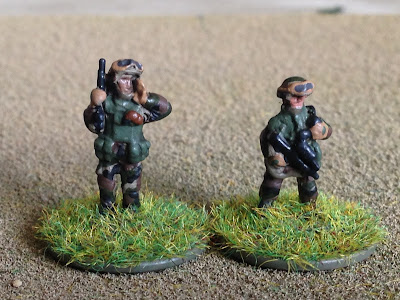 First up are two guys from the command group, an officer/NCO type on left, and an RTO on the right.  The leader has a pistol holster on his chest (little hard to make out in the photo, but looks good in real life).  You get a good look at the camo, which looks decent; I did the gear and body armor in Italian Green, which I think looks okay, used khaki, dark green, Italian Dark Brown, and black on the camo.  Both guys are armed with the FAMAS rifle, which looks good, and I really like the poses themselves. 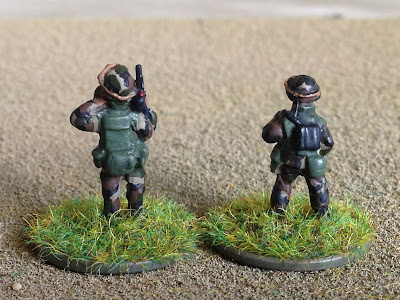 Reverse, you can see the radio on the back of the right-hand guy. 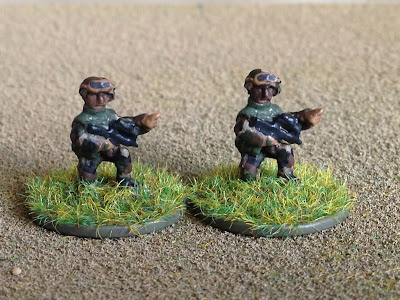 The third pose, another officer/NCO, from the command pack.  You can see he's got some sort of optic on his FAMAS.

You can see I did my usual three different skin tones; all the guys are wearing gloves and have goggles on their helmets (almost all have goggles, not quite all). 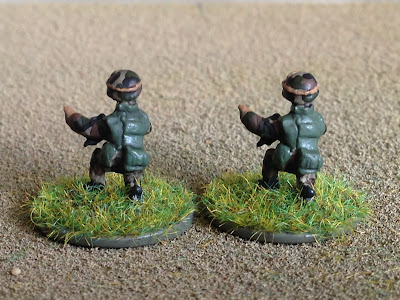 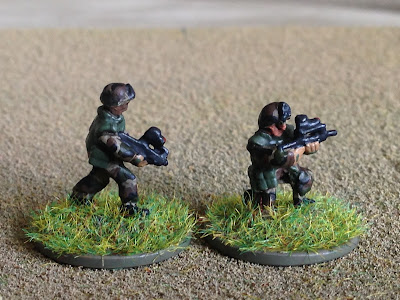 Two poses from the FELIN rifle pack.  Both guys have optics on their rifles, which I think is pretty cool, and looks like NVGs on their helmets.  The barrel for the guy on the left is a bit short, but I think that is a casting issue rather than a sculpting issue. 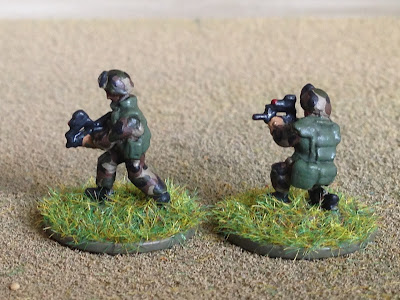 Reverse.  I like the gear; no packs, but they've got a decent amount of gear on (and you don't really see French infantry with packs a lot in the 'real life' photos in any case). 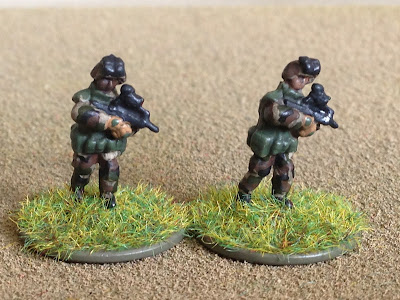 Last pose from the FELIN pack, I like it.  Rather then goggles, looks like the guys have NVGs on their helmets. 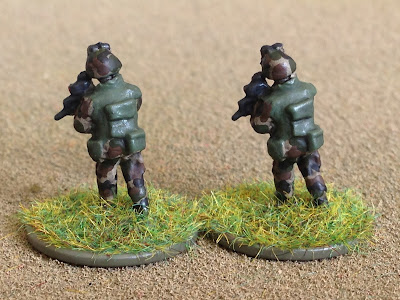 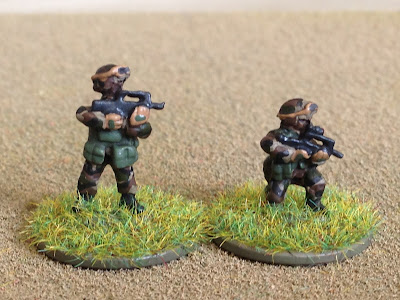 Two guys from the firing rifles pack, guy on right has an optic on his rifle (looks like an aiming dot). 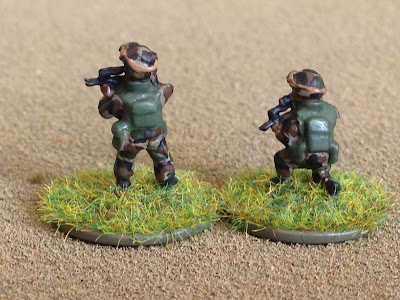 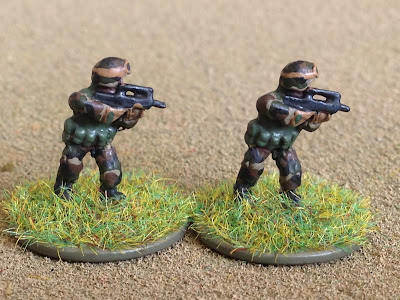 The third pose from the firing rifles pack. 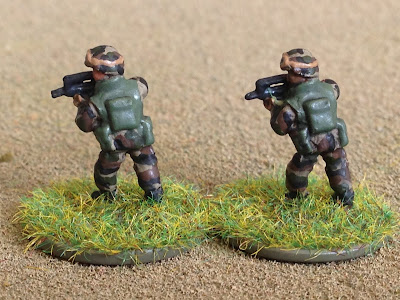 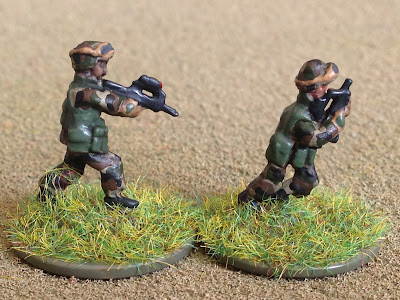 Two poses from the advancing rifles pack, optic on guy at left. 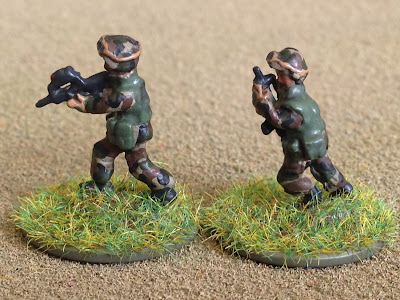 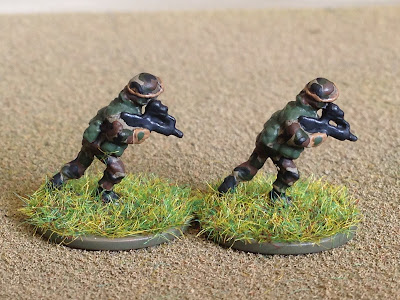 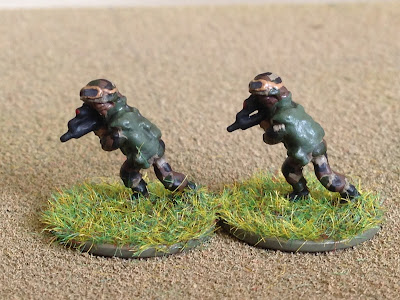 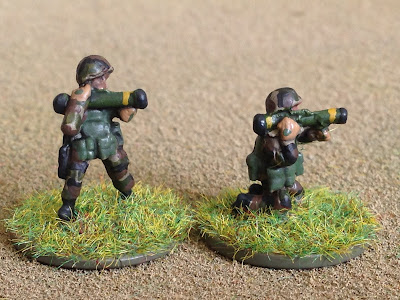 And now we get to the AT-4 pack, two guys firing.  I love the kneeling pose, looks really cool to me. 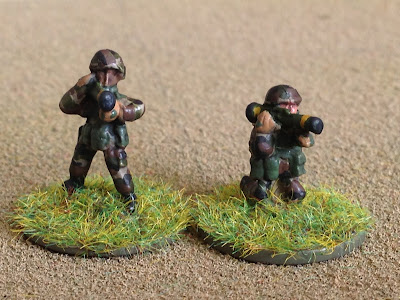 I turned them so you can see they're sculpted in 3D, not flat. 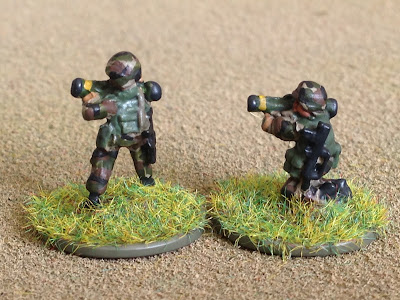 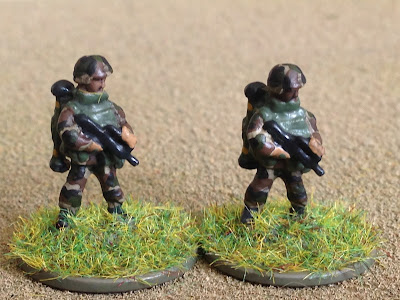 And the last pose, two riflemen carrying AT-4s.  Not sure why, but I really love this pose, just looks cool to me. 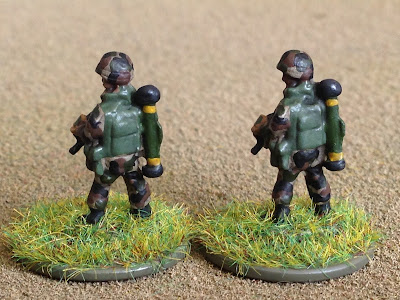 And reverse.  I just can't help but put yellow on anti-tank weapons, throw a little color in their.

Well, that's the next force added to my modern skirmish collection, already got a plan for an operation (5 or 6 fights) to get them on the table.  I've got more modern forces to show ya, so stay tuned.