Switching gears, I haven't forgotten about WWII, and continue to add to that collection as well.  I've been working on US and Japanese troops for a campaign (actually, a series of campaigns) in the Pacific.  I had planned on beginning the 'war' at Guadalcanal in August 1942, but when I found myself over on the Eureka Miniatures website looking at Modern Australians I stumbled into something else: US Marines for early war.  They're actually titled "Wake Island," but that doesn't work for me as I plan on following a platoon of Gyrenes through the entire war, and many of the early war battles were battles of annihilation, all US troops being captured or killed.  So I'm not quite sure where I'll start, probably make up some scenario for the Philippines where Marines are involved on the Bataan Penninsula but end up being ordered out or otherwise escaping to live and fight another day.

In any case, that is for the future; for now, let's look at these magnificent little sculpts. 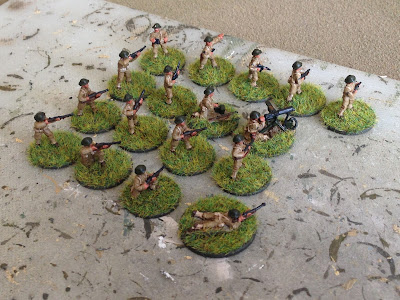 The whole force, 17 troops from several different packs.  I bought a pack of two leaders, two BAR men, a two-man M-1917 water-cooled machine gun, a pack of three Marines with Thompson submachine guns, and a pack of eight riflemen armed with the venerable '03 Springfield.  I painted them up in early war khaki, with sand leggings and load bearing gear, and dark green 'pie plate' helmets.  Did grassy bases for the jungle. 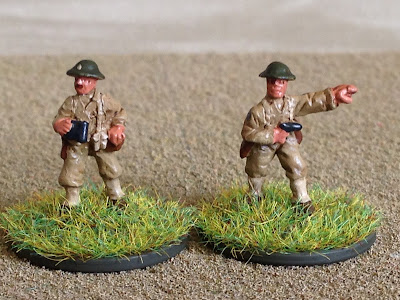 First men up is the leader pack.  I painted them up as an officer (left) and a senior NCO (right).  You can see a 'stache and rank insignia on the officer's helmet, and I tried to paint stripes on the NCOs sleeves. 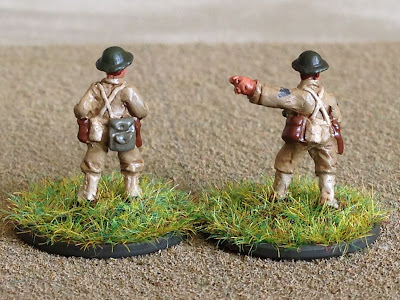 Reverse.  I really like the sculpts.  Good proportions, natural looking poses, got some good heft to them, raised detail to make it easy to paint. 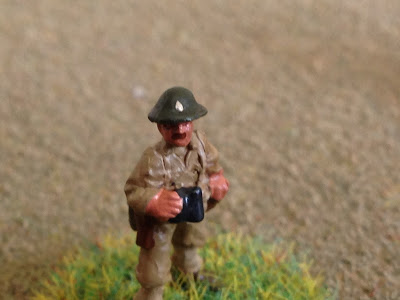 The officer's helmet and moo-stache. 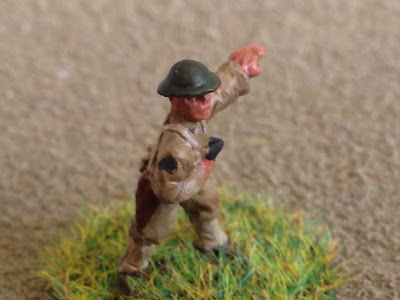 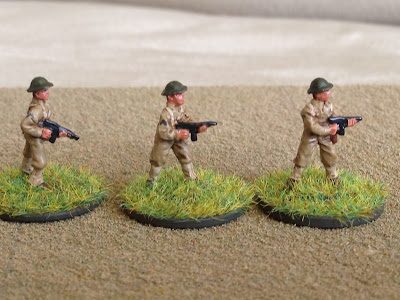 Next we have our three men with M1928 Thompson machine guns, still chambered for .45 ACP (as opposed to the later M-1 Thompson chambered for .30 cal).  My only problem with this entire range is these guys (don't misunderstand, it's nothing I can't live with): their Tommy Guns should be a bit longer (the barrel), should have a foregrip, and were much more likely to have utilized the drum rather than the straight, 20-round magazine. 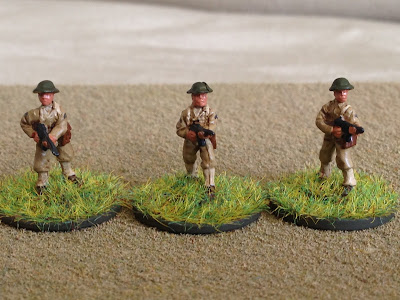 Tommy Gunners coming at ya.  Again, nice proportions, no one is flat.  I painted stripes on each of these guys, figure they're Corporals. 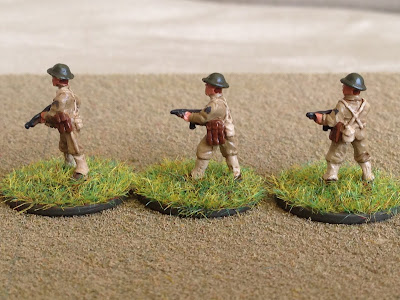 Reverse.  They have the early war, all leather, pouches for their magazines. 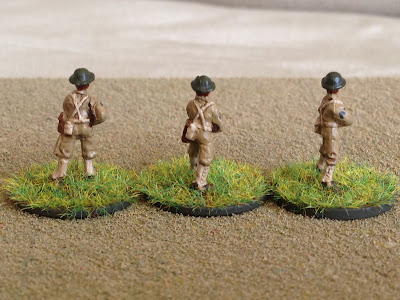 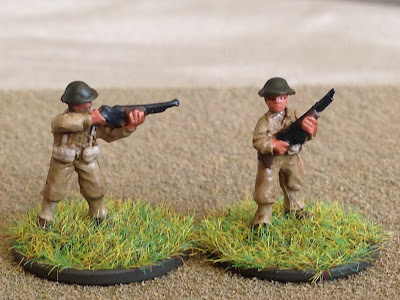 The two Marines of the BAR pack.  Looking good. 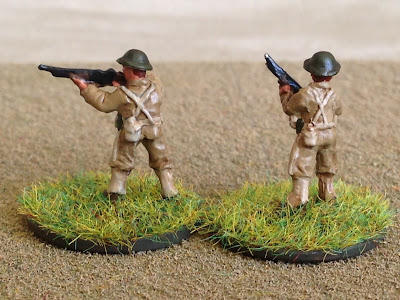 Reverse.  Apparently, somewhere along the way, I scraped the guy on the right's barrel.  Need to fix that... 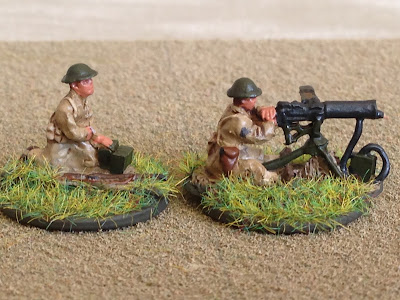 The two-man machine gun team manning the M-1917, complete with tripod, box for the ammo (attached, as well as another with the A-gunner), and water coolant.  Yay!  The gunner actually has a pistol!  I put stripes on the gunner too. 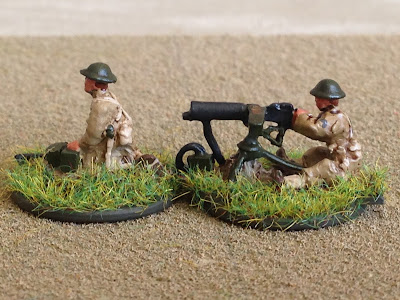 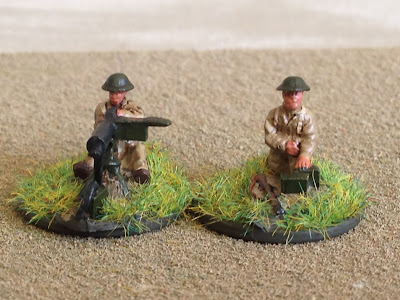 Comin' at ya.  I will point out that each guy is on kind of a half-base, they're meant to base together right next to each other. 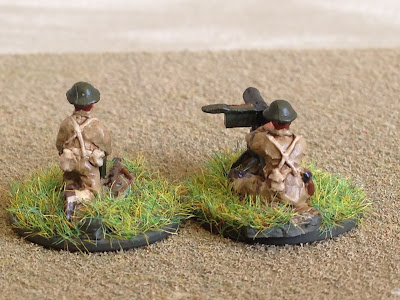 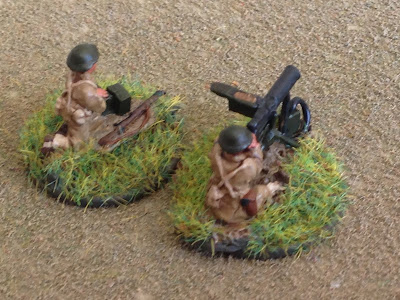 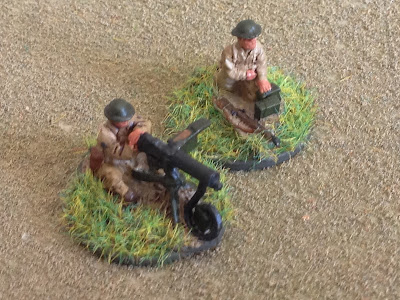 And one more.  Excellent sculpting.  I keep coming back to the sculpts for this reason: I'd actually seen these on the Eureka website quite some time ago, but I was a little leery of purchasing them as the pics on the website make them look a bit weedy.  In my humble opinion, Eureka Minis is doing themselves a major disservice with the photos on their website, the figures are so much better than the pics. 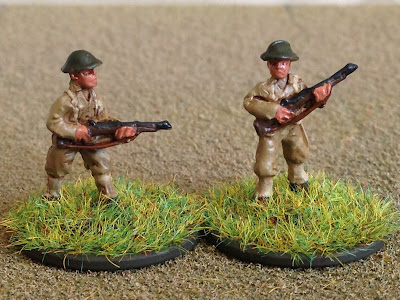 Now we get to the riflemen, the first two Privates with Springfields. 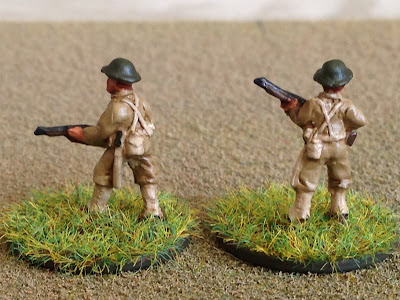 Reverse.  You get a good look here at their long bayonets. 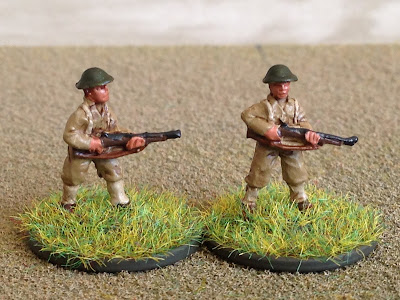 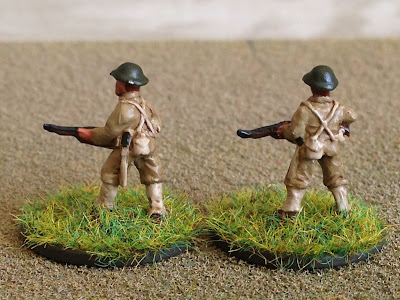 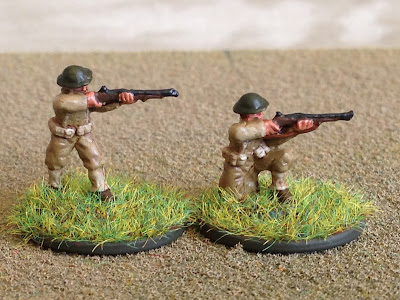 Next two.  Awesome, classic marksmanship poses: a good 'off-hand' on the left, a good 'kneeling' on the right. 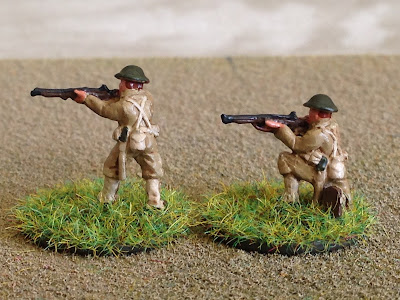 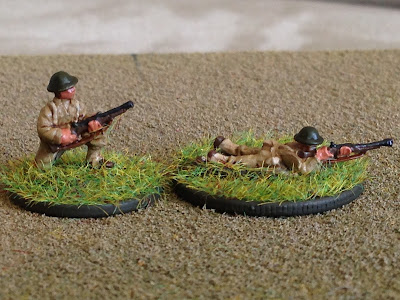 And the last two rifle poses, a kneeling and watching and a prone rifleman. 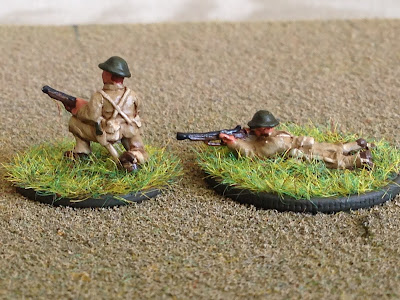 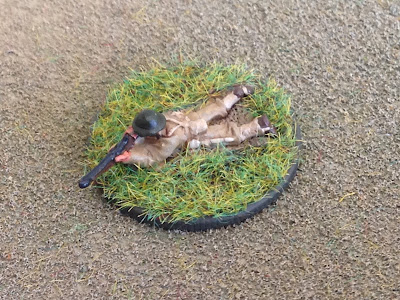 Another look at the prone pose. 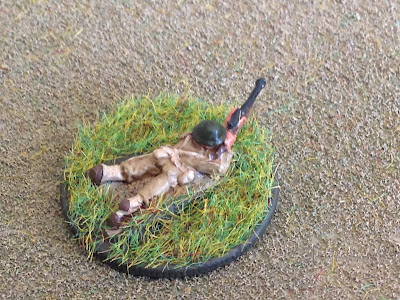 So, there they are, my next latest force for 15mm skirmish gaming.  Dammit, I can't wait to get these guys on the table, I just don't have time to do all the stuff I want to do!!!  I'm sure this is the eternal lament of the wargamer, but it's killing me nonetheless.  I highly recommend these troops for some early war US action, they're absolutely fantastic.  Meanwhile, I need to get back to my Cuba Libre stuff in the Middle East, coming soon.