More modern skirmish troops, this time from Eureka's 15mm line of Modern Australians.  These troops are really magnificent, just great sculpts with great poses and great detail in their gear.  You may recall that I've previously painted and posted up Modern Aussies on the blog; with them I took my first shot at universal camouflage pattern. It looked pretty good (I thought), but didn't look 'right,' if that makes sense.  I've also posted that I took six of them and painted them up as modern private military contractors (PMCs).  Well, not being in love with the camo I did on the first platoon of Aussies, I sold them off, bought some more, and gave it another go.  This time I'm much happier with my attempt at universal cam, think I did a pretty okay job. 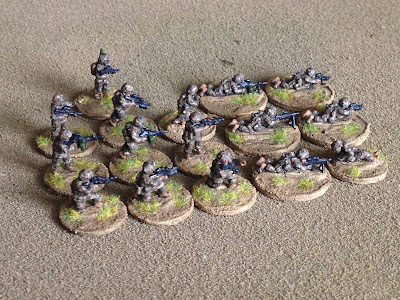 The whole group, sixteen troops.  I bought the rifleman pack, the SAW (Minimi) pack, the standing and the kneeling command packs, the prone machine gun team, and a prone sniper team (in regular uniform, not the ghillie suit).  All the troops from all the packs are not here as I stole some and made some more PMCs, but that's for another post.  Being in universal cam, the point is to operated in desert and temperate climates, so I did my best to base them where they'd fit in either.  I also have some that I'm going to paint up for Arctic climate, but haven't started working on them yet. 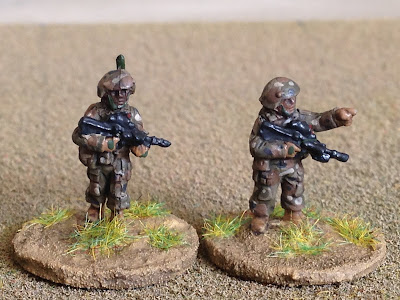 First up is the standing command pack, a leader-type and his RTO.  I put them in universal cam, to include their vests and gear pouches, and they're all wearing gloves.  I also did my now 'normal' three skin-tone variations that I've come to know and love for post-WWII troops. 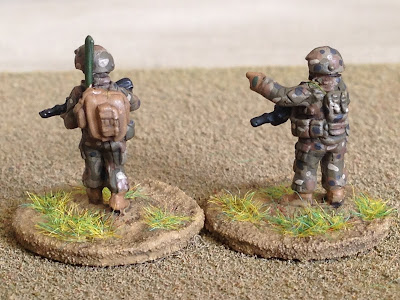 Reverse.  The gear and weapons look fantastic, and I dig the poses too. 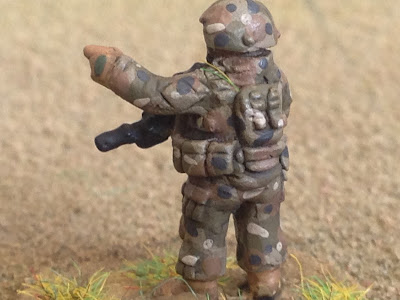 A close up of the universal cam; basically, I just softened all the colors.  I used three colors (olive drab, dark tan, and khaki) for the underlying camo, about a third for each color, then dotted with sand and dark gray.  It still may not be perfect, but I'm very happy with how it turned out. 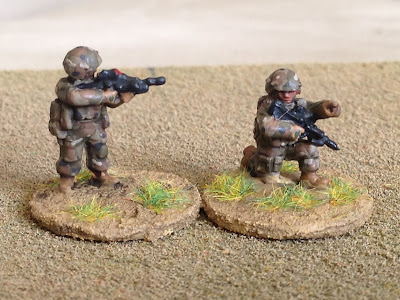 A kneeling leader on the right and a rifleman on the left. 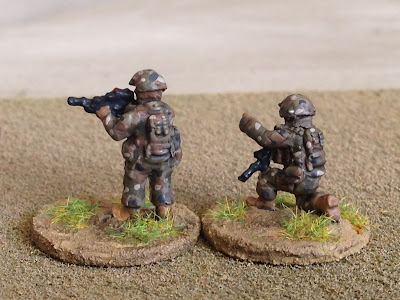 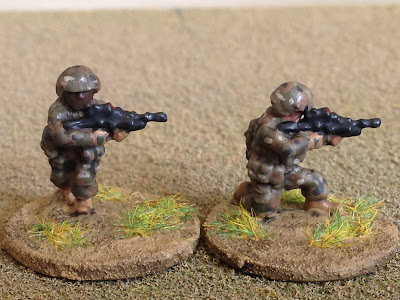 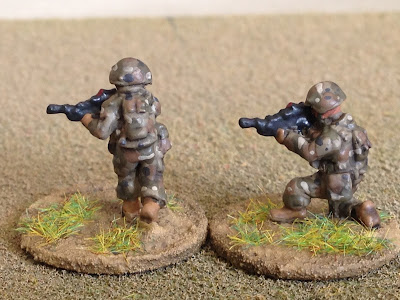 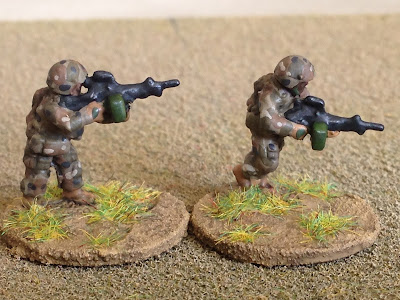 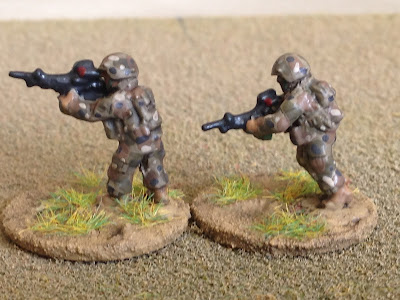 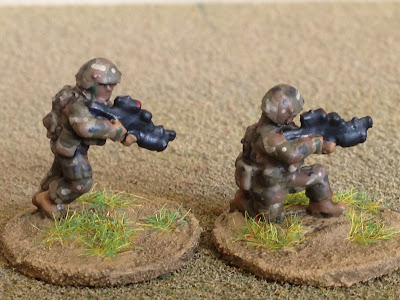 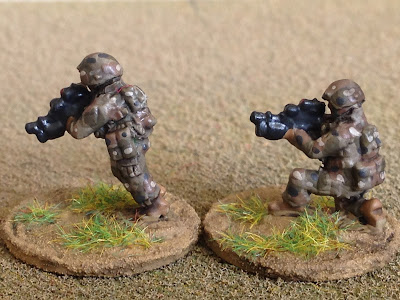 The prone machine gun team; I'm actually not sure what the Aussies call it.  I know some Europeans call it the FN-MAG, the Brits call it the MAG-58 (or simply 'Jimpy,' for General Purpose Machine Gun), and the US calls it the M-240. 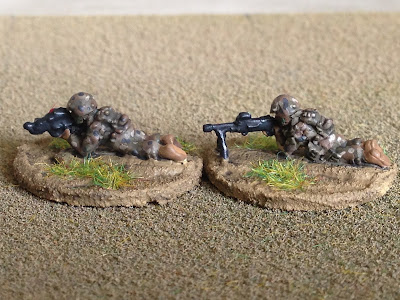 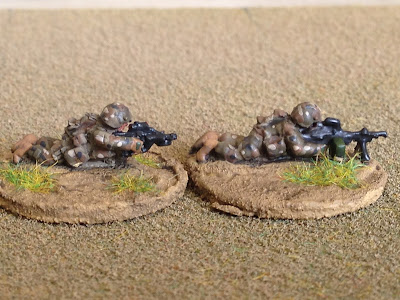 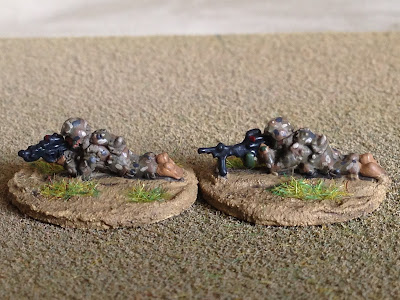 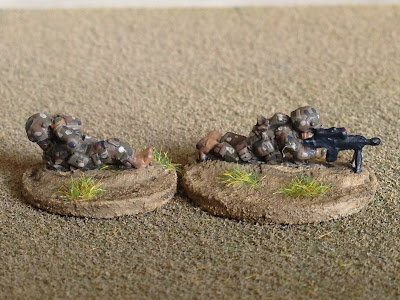 And the sniper team.  I absolutely love how the spotter is leaned back, all casual, on his patrol pack/camelback. 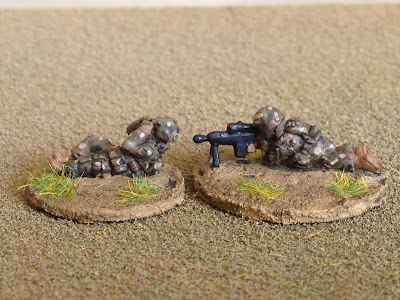 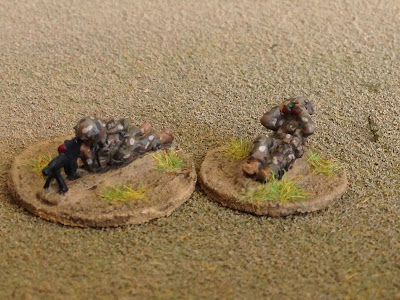 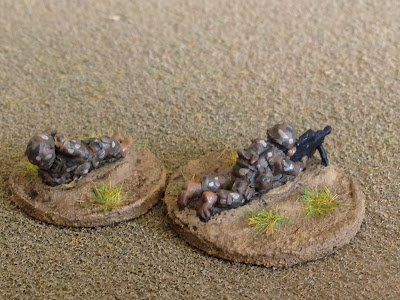 So there's my next set of modern bad-asses, ready to hop into the (tabletop) fight.  Not sure where they'll see action, but almost assuredly it will be something continuing my 'Cuba Libre' story.  More stuff to post, and I'm working on a modern Middle East batrep (for which I used Ambush Alley's "Lawyers, Guns, and Money" scenario pack).  Stay tuned.