Continuing my series of posts showcasing various manufacturer's modern 15mm offering, I hereby present Rebel Minis' Modern US Infantry.  The figs are relatively cheap, well cast (clean), nice and chunky with plenty of gear, though detail on a few of the rifles is a little soft.  Overall, excellent figures that I'm happy to have, and they painted up quick and easy.

I plan on using them as Rangers for Somalia in 1993, though this is not correct as all the M-16s have ACOGs on them; the figures look to be perfect for 2001 to maybe 2006 or 7, and so I painted them up in the Desert Tri-Color cammies; I think it turned out well, except all the troops look like they just left Cash Sales (for the uninitiated: they all look like they're wearing brand new uniforms, the colors are too crisp, no fading at all).  I painted them as having Interceptor vests, but in Woodland camo as common in 2003, and as the Rangers' "RBA" in 1993, and black (as opposed to sand-colored) goggles.

On to the troops! 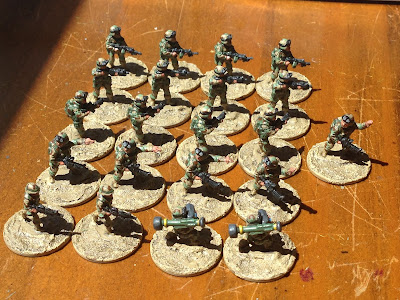 The whole force, 21 troops, for something like 12 bucks.  Not bad a-tall.  Nice mix of weapons and poses too. 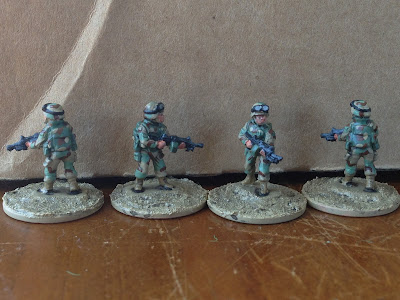 First up, the SAW gunners.  Now, the website calls them SAW gunners, but I've got to tell you, the weapons were pretty doggone long to be SAWs.  The barrels made them look more like 240s to me, but that didn't match all that well with the rest of the weapon, or the box magazine.  So I spent about five minutes with an X-acto knife doing a little surgery to cut the barrels and bipods shorter; I'm happy with how they turned out. 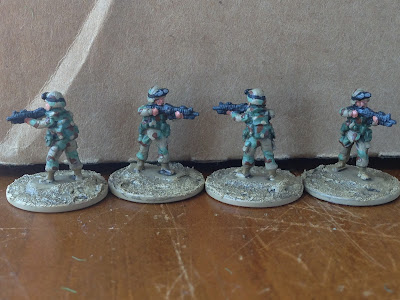 Next up, four M-203 grenadiers.  This is the pose that has the soft detail on the weapon: it's a good pose, just the M-16 is looking a little anemic. 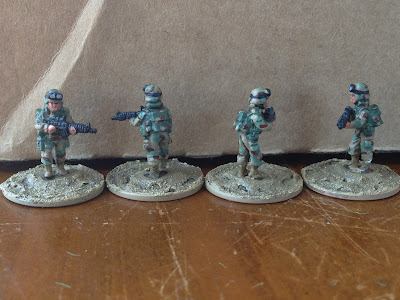 Four riflemen, with nice, solid rifles, good posing and gear.  One of them has a bigger pack than the rest, and I'm not sure what that's about; my only guess is that maybe for Army guys, the guy with the big pack is the unit medic.  Doesn't really work for Marines though, as our Corpsmen don't carry rifles. 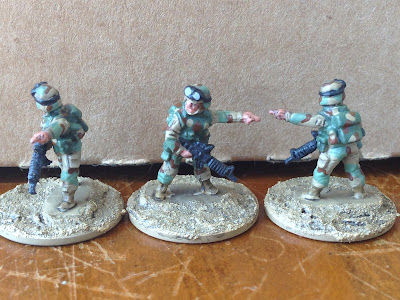 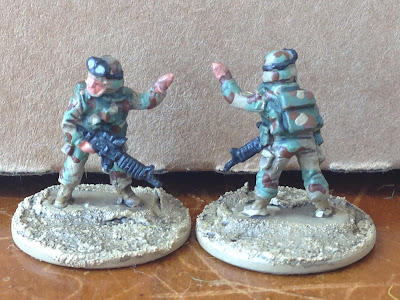 Two more leaders, which are again overall done very well, I'm just not as happy with the fact it's the same as the previous pose, but with the left arm crooked rather than straight.  Not a big deal, just makes the two poses a little too 'samey.' 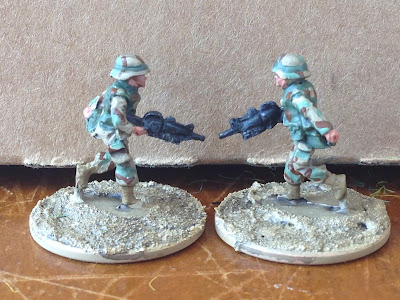 Two more grenadiers, double timing.  I like the pose, and I believe they were specially made for Ambush Alley games.  The only issue, and again, it's a minor one, is these are the only two that don't have packs or goggles, and they're a tad bit slighter than the rest of the pack. 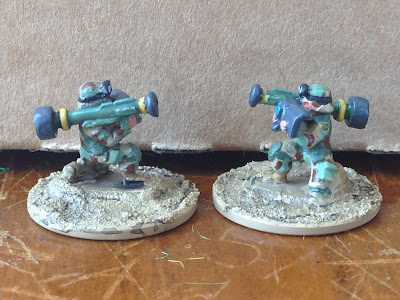 Two Javelin ATGMs, which are very well done for the weapon and pose.  In a push for earlier eras, I suppose I could just pretend their Dragons if need be?

Anyway, that's the whole group of them, and please forgive my nitpicking, they are excellent troops and I'm very glad I've got them, just need to get them on the table.  One last thing to add; Mike at Rebel Minis has been a real pleasure to deal with; great communication, and very speedy.  I think I had the lead in my hands five days after I placed my order.