As you may know, I've gone into 15mm in a big way (big for me, at least).  I plan on using them for skirmish gaming, whilst sticking with 10mm for company-level fighting and 6mm for battalion-level and up.  In any case, I've bought a bunch of Rebel Minis' 15mm, quite a few Peter Pig, and then I decided to go for some Battlefront.  I'm doing a bunch of Vietnam-era, Modern Africa, and Modern Middle East, and I really liked what I saw online of the figures, figuring I could use them for Vietnam and modern stuff. 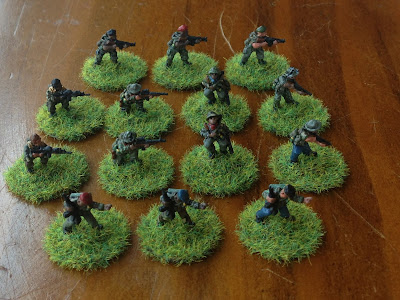 The whole shebang: 14 troops for about nine bucks.  I was really pleased with them; the castings are fantastic, and six poses in fourteen guys is pretty damn cool if you ask me.  I really tried to get an eclectic mix with these guys, to make them as 'special forces-sy' as possible.  I threw in a wild mix of different uniforms, and I threw in different skin tones as well, just for good measure.  My only complaint is that almost everyone has a Stoner assault rifle; not a single M-16, AK-47, M-3, M-1 Thompson, M-1 Carbine, BAR, or M-60.  They even have a couple guys strapped up with belt-fed ammo, but no belt fed weapons (yes, I know the Stoner could take belt-fed ammo in certain configurations, but the guys have drums in their weapons, so it doesn't really make sense).  But I'll overlook all that due to the fact 1) the figures are just damned cool looking, and 2) two of the guys have M-14s.  And I love M-14s ;) 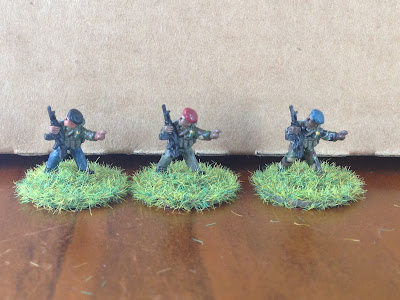 First up, three gentlemen signaling and carrying mag-fed Stoners.  You can see the mix of uniforms: blue jeans, olive drab, Woodland camo, Tiger Stripe camo (not sure how I feel about my first efforts at Tiger Stripe), green-side out duckhunter, and brown-side out duckhunter.  I threw on different color berets just for fun.  They're Special Forces guys, they wear what they want. 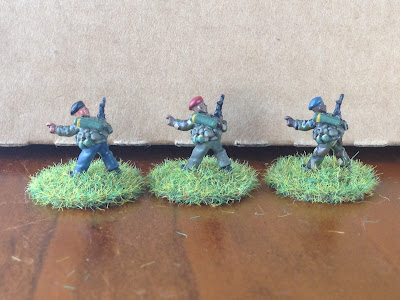 Back side of the same guys.  Here you can see them carrying M-72 LAWs, and better looks at their uniforms.  From left to right, the troops' jackets are: green-side out duckhunter, Woodland camo, and Tiger Stripe camo. 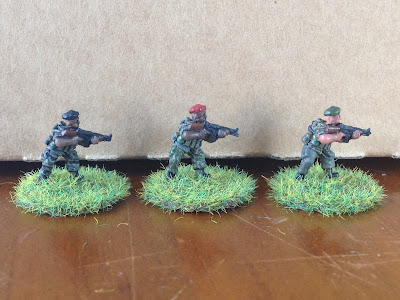 Next three guys; I honestly am not sure what weapons they are carrying on.  My guess would be more Stoners, but I painted them up like AKs, just for some difference. 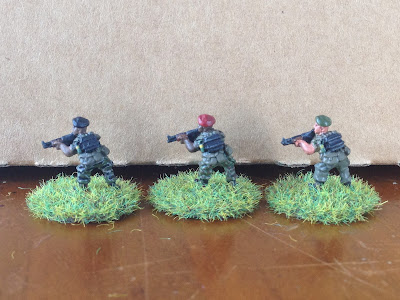 The reverse, showing these guys are carrying PRC-25 VHF radios. 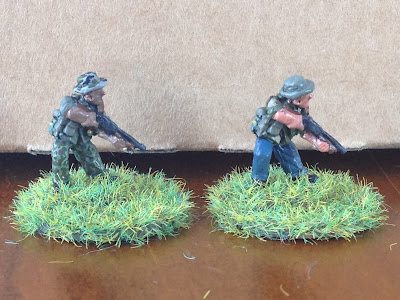 Next two guys, with shotguns; I was going to say Remington M-870s, but that's just me being partial, I have no idea for sure what they are. 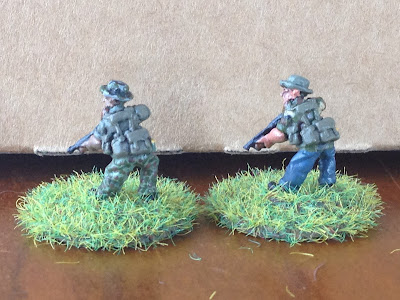 The reverse of the shotgun guys.  You can see how crisp and raised the various gear and webbing, made it very easy to paint. 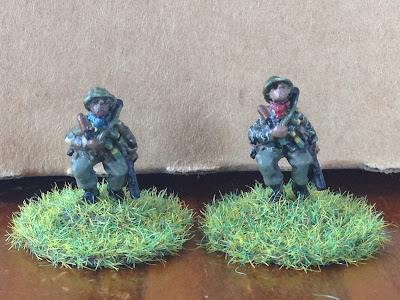 Next up, two grenadiers.  You can't really make it out, but in their left hands they are carrying M-79 grenade launchers. 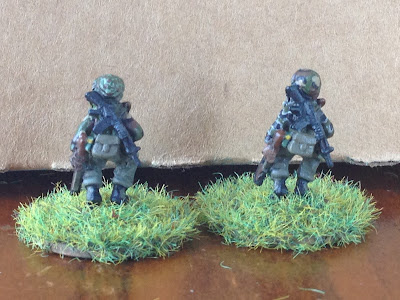 The reverse, where you can see their slung Stoners. 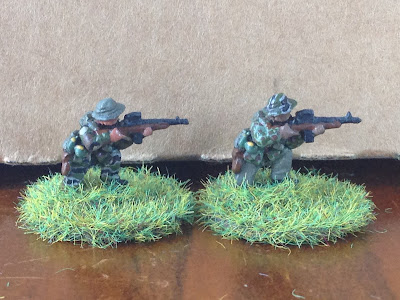 My favorite two troopies, the M-14s.  My only misgiving is the optic atop the M-14; this is Vietnam, and I have never seen anything looking like that for Vietnam-era gear.  But I still love'em ;) 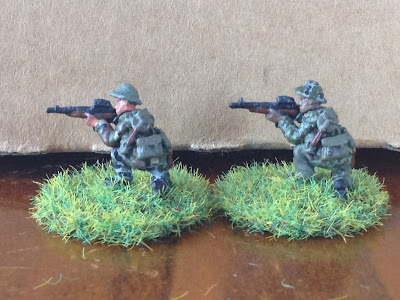 Reverse.  Look at that!  Ahh, the nostalgia right!?  WWII-era e-tools. 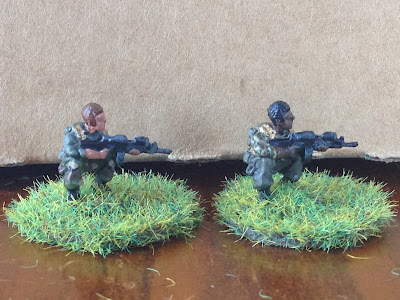 And the last pose, two troopers with Stoners, crossed MG belts, bareheaded.  The one on the right is wearing a brown-side out duckhunter jacket. 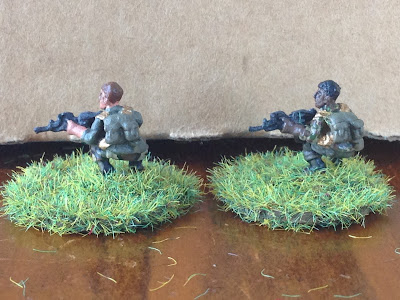 I like the packs, though I don't recognize them.  If they were ALICE, they should have three large pouches, not two.  But they're still good to go. 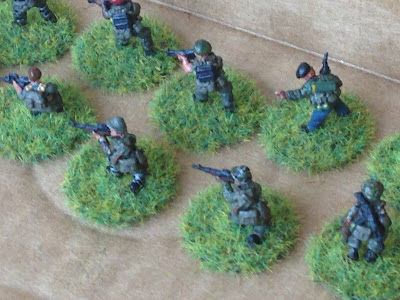 One last look, as they would appear on the gaming table.

I've been painting my butt off, still haven't played a game yet, but my son keeps begging me to play, so I need to get to it.  I'd say I'm about done painting, but we've all heard that lie before...  Better to say, I'm almost finished painting what I have on hand.  Having said that, I've got Flashpoint Miniatures "SEAL Patrol" and "Marine Platoon" (with M-16 and M-14 mix), and Flytrap Factory "US Marines" and "British Marines" in the mail on the way, so soon I won't be close to being finished with what I have on hand.

Then I need to buy some Peter Pig modern Marines, some more Rebel Minis modern US infantry, and some Rebel Minis civilians.  But I really need to get to work on finishing Cuba Libre's War of Liberation, which I'll be focusing on this weekend.