No time for gaming last weekend, but I did get some stuff processed and get some painting done, and here is the visual record of the goings on.  First up, I've commented quite a few times about how I'm beginning to feel like a Third-World Dictator (due to my recent megalomania in 6mm).  I also commented around the yard that 1) I was contemplating a major purchase, and then 2) I made said purchase, and all I can say is now I definitely qualify as a dictator, only waiting on a suitable nation state to allow me demonstrate my special brand of dominating benevolence.  So I decided I'd document the whole thing in pictures. 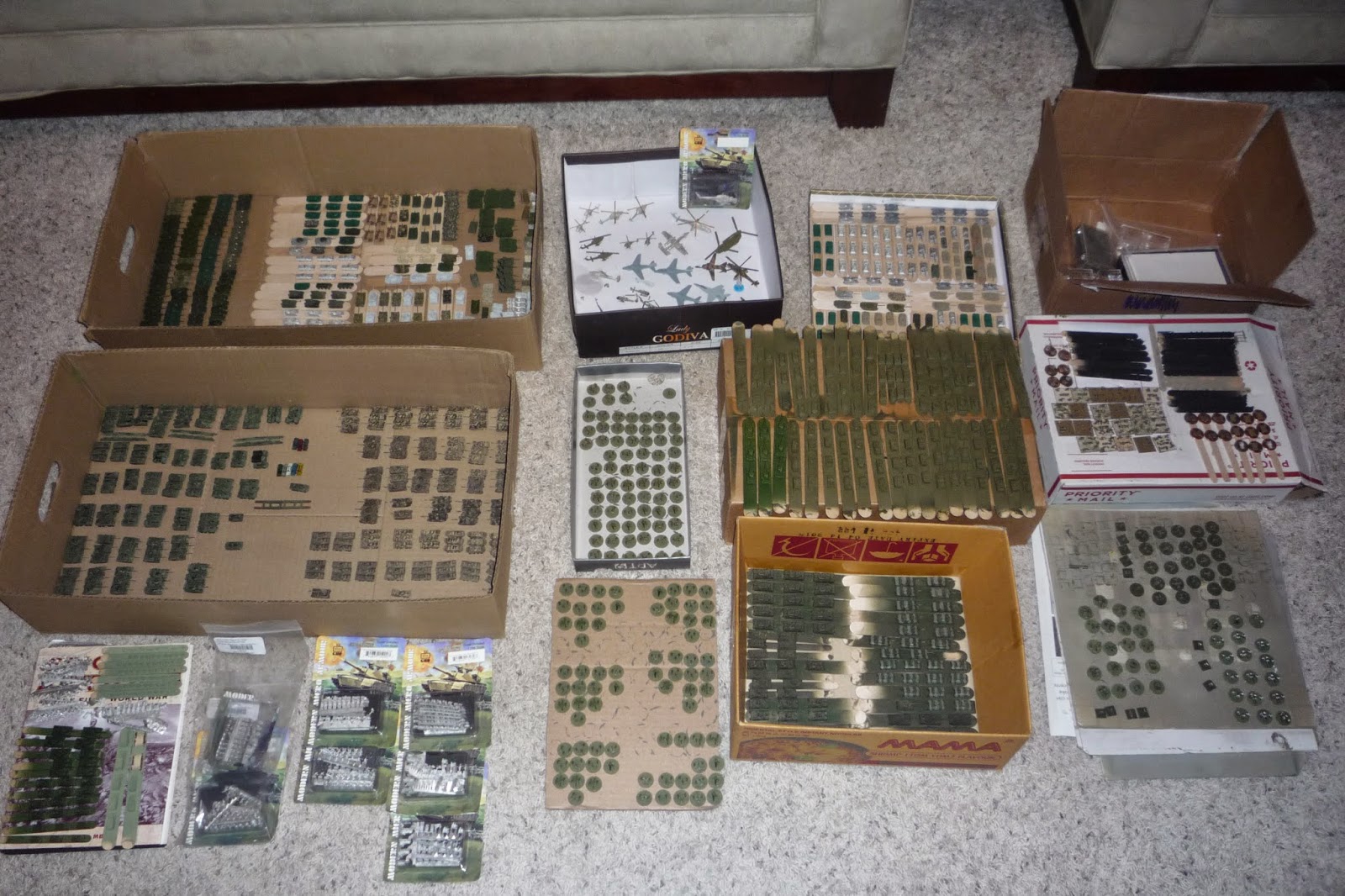 I figured it at about $3k in raw lead; I bought about 85% of it second-hand, so I've spent about $900 on all of it.  I'm going to have to get really creative with rules and basing, as I'm realizing I actually have too much ;)  No seriously, I'm looking at multi-basing my stuff, i.e., putting three tanks on a base for armor, and three AFVs and some infantry on a base for mechanized infantry.  Even then I don't know if I can get all this stuff on the table.

What really makes me mad is that I have a tremendous amount of infantry already painted and based on pennies, and that's not how I'll be playing with these, so I'm not sure what to do with them.  I really don't want to pull them off the pennies and stick them on new bases, and I don't really want to sell them off.  We'll see what happens. 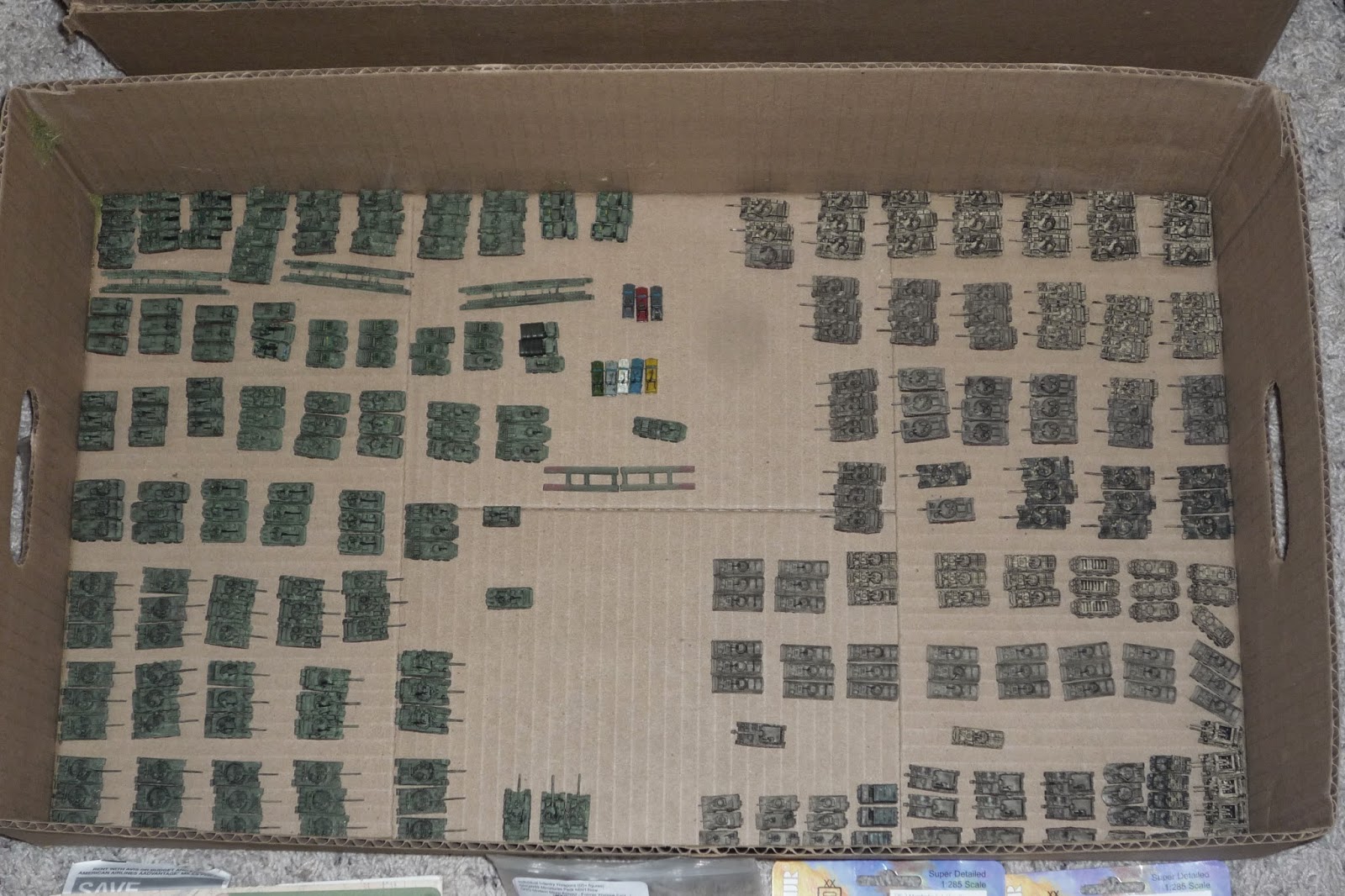 So, this is what you've already seen,  my 'green' and 'khaki' Warsaw Pact forces.  These are pretty  much the only vehicles 100% finished that i can throw on the table right now.  I say only, but it's about 300 vehicles of all sorts. 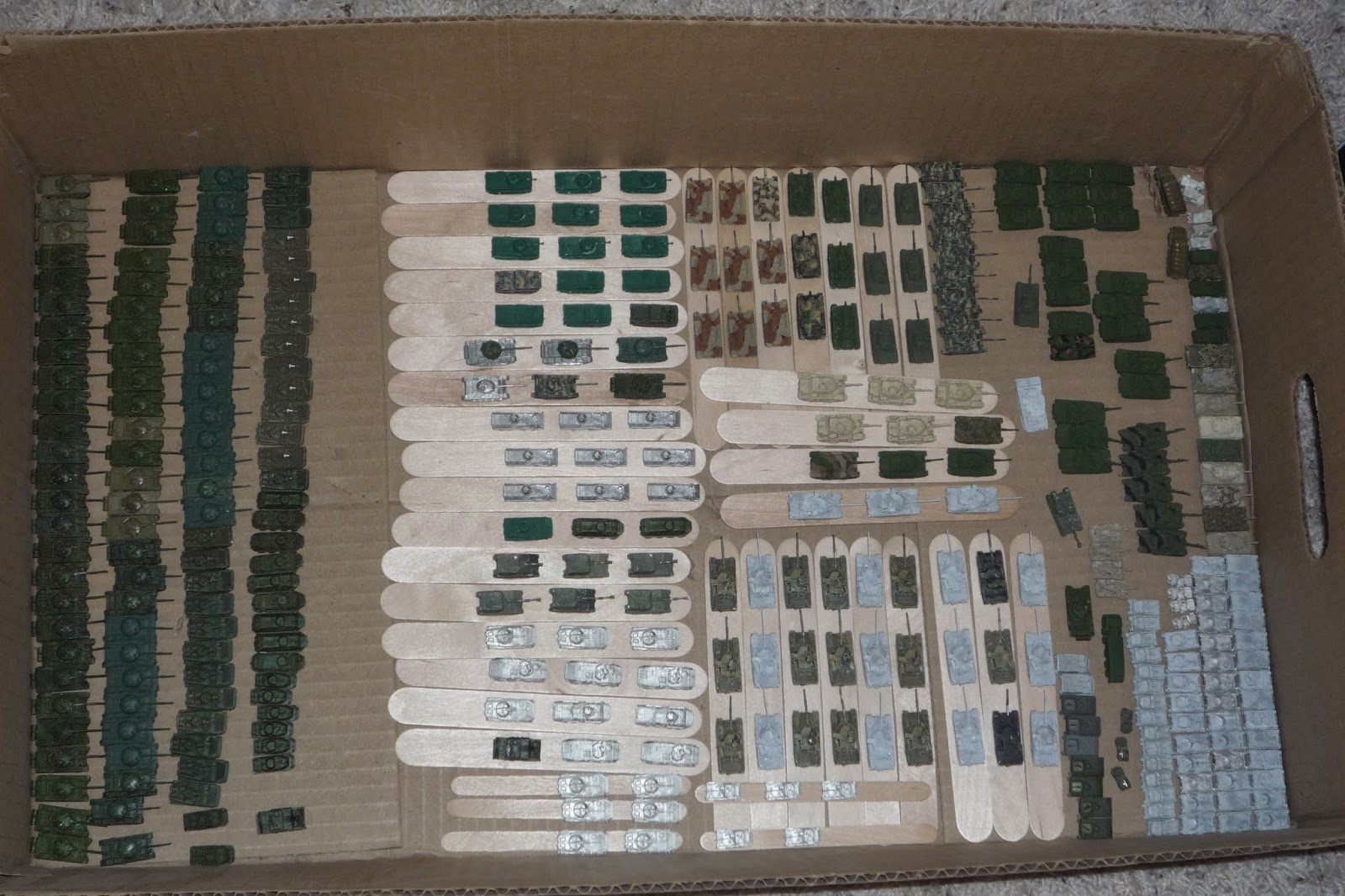 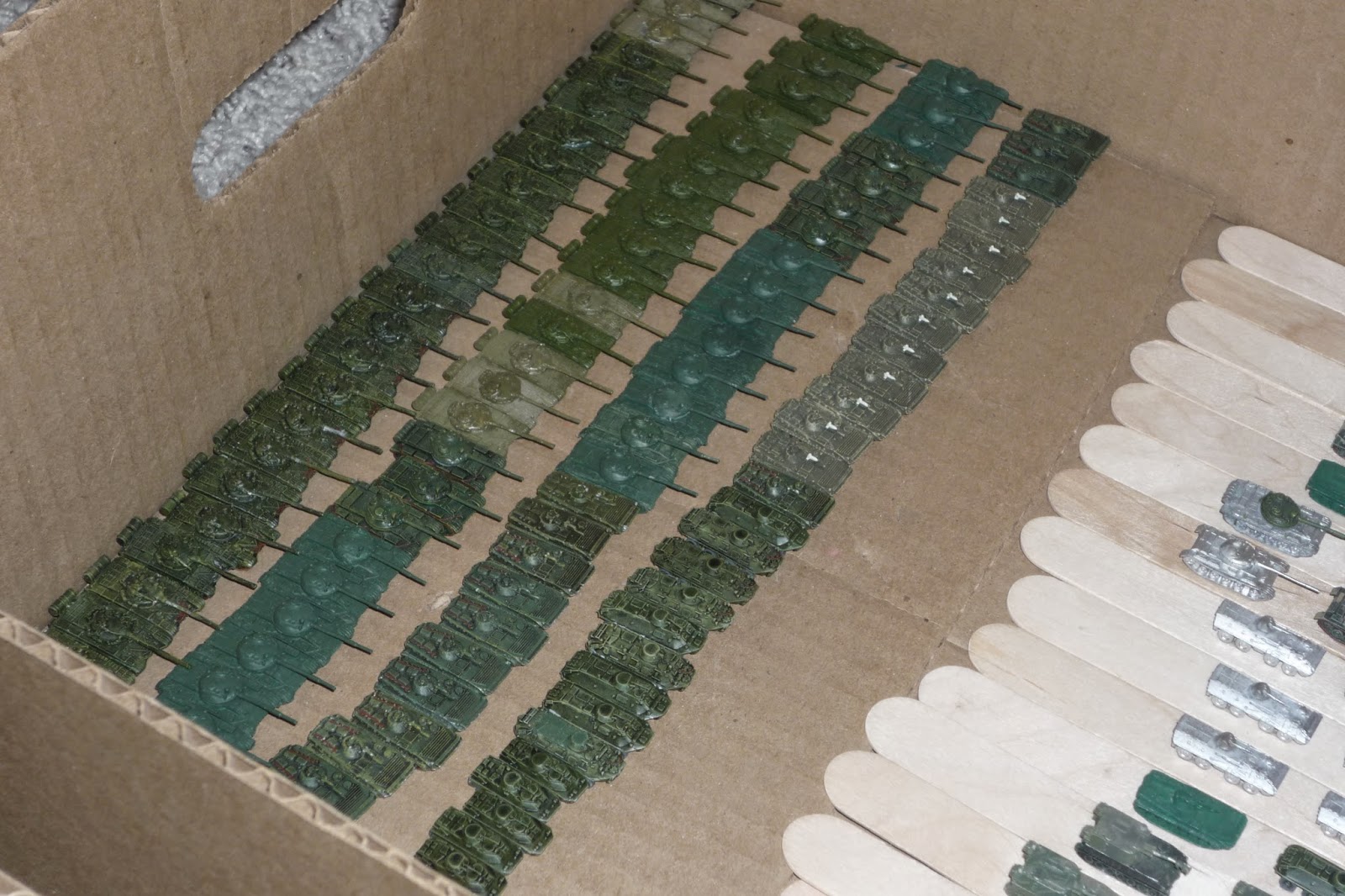 Closer look at the left side of the box. 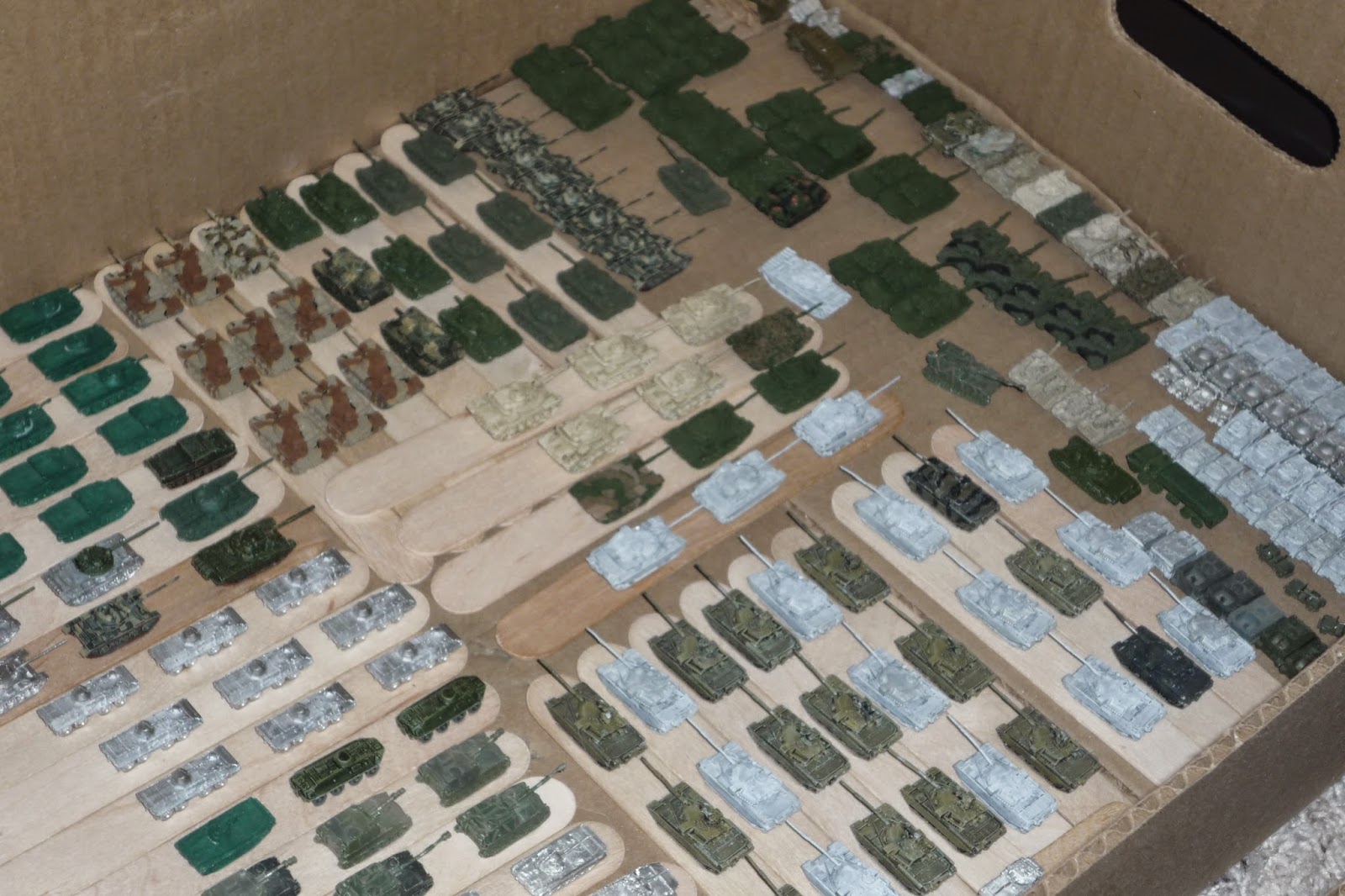 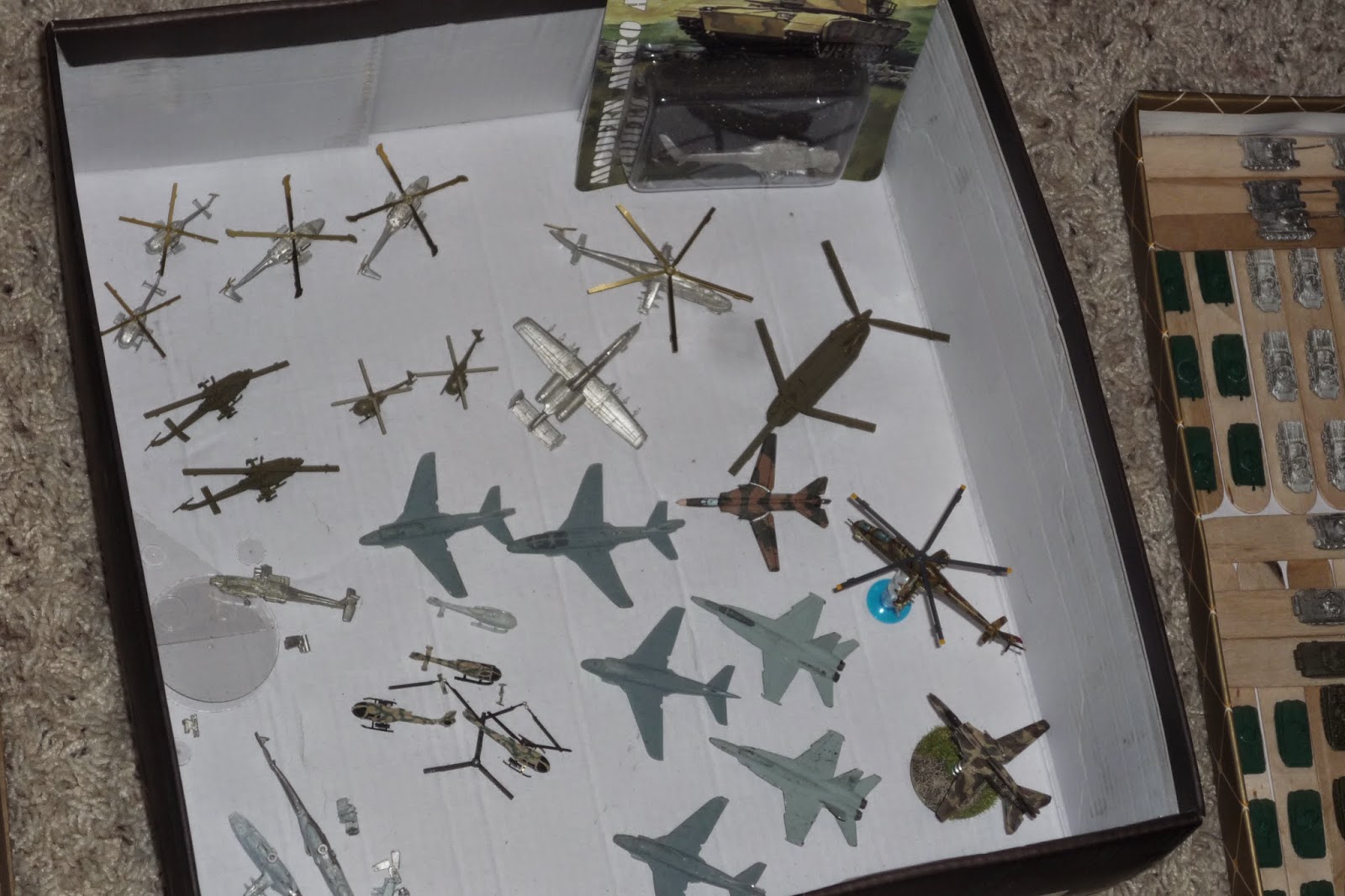 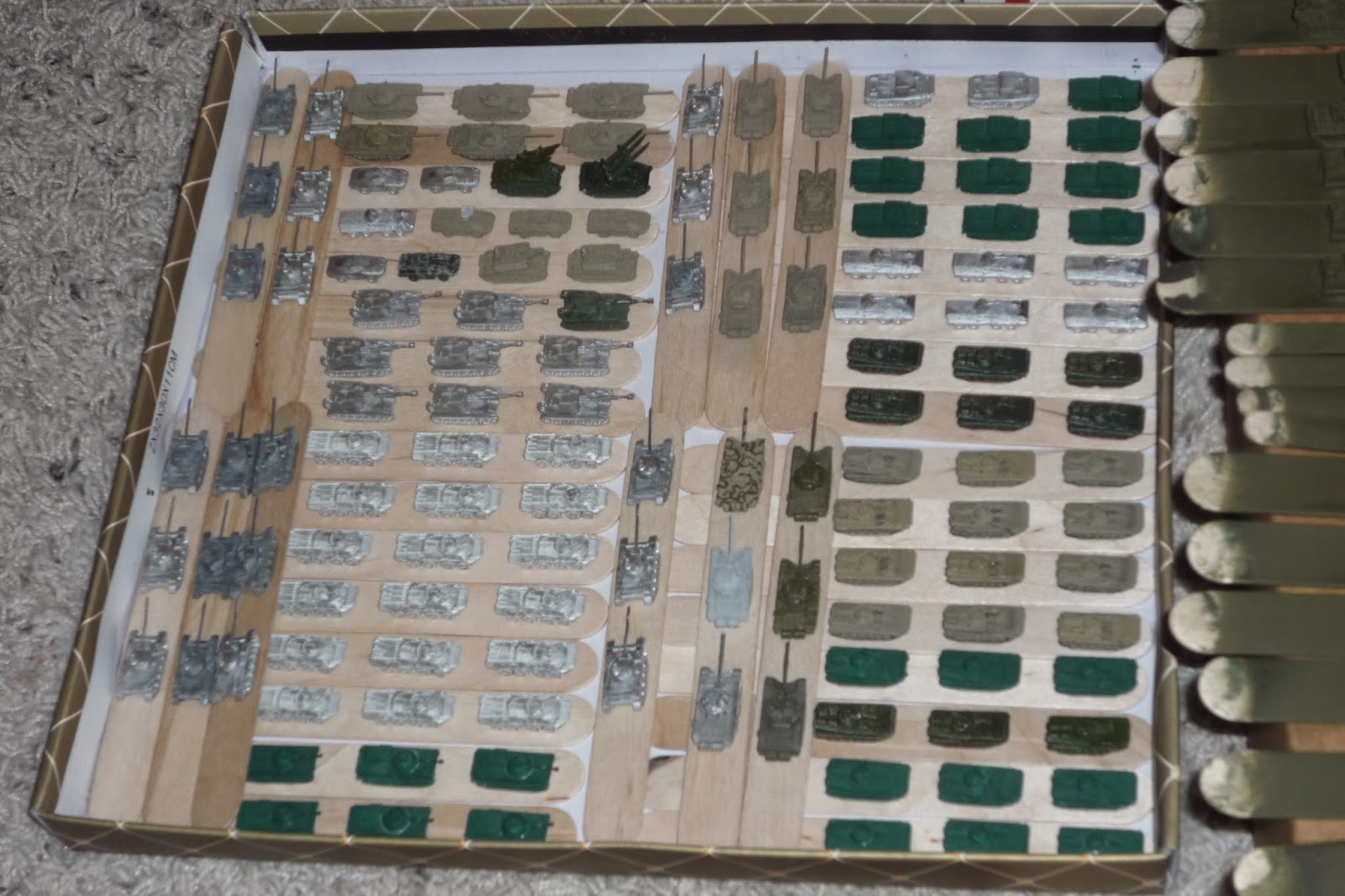 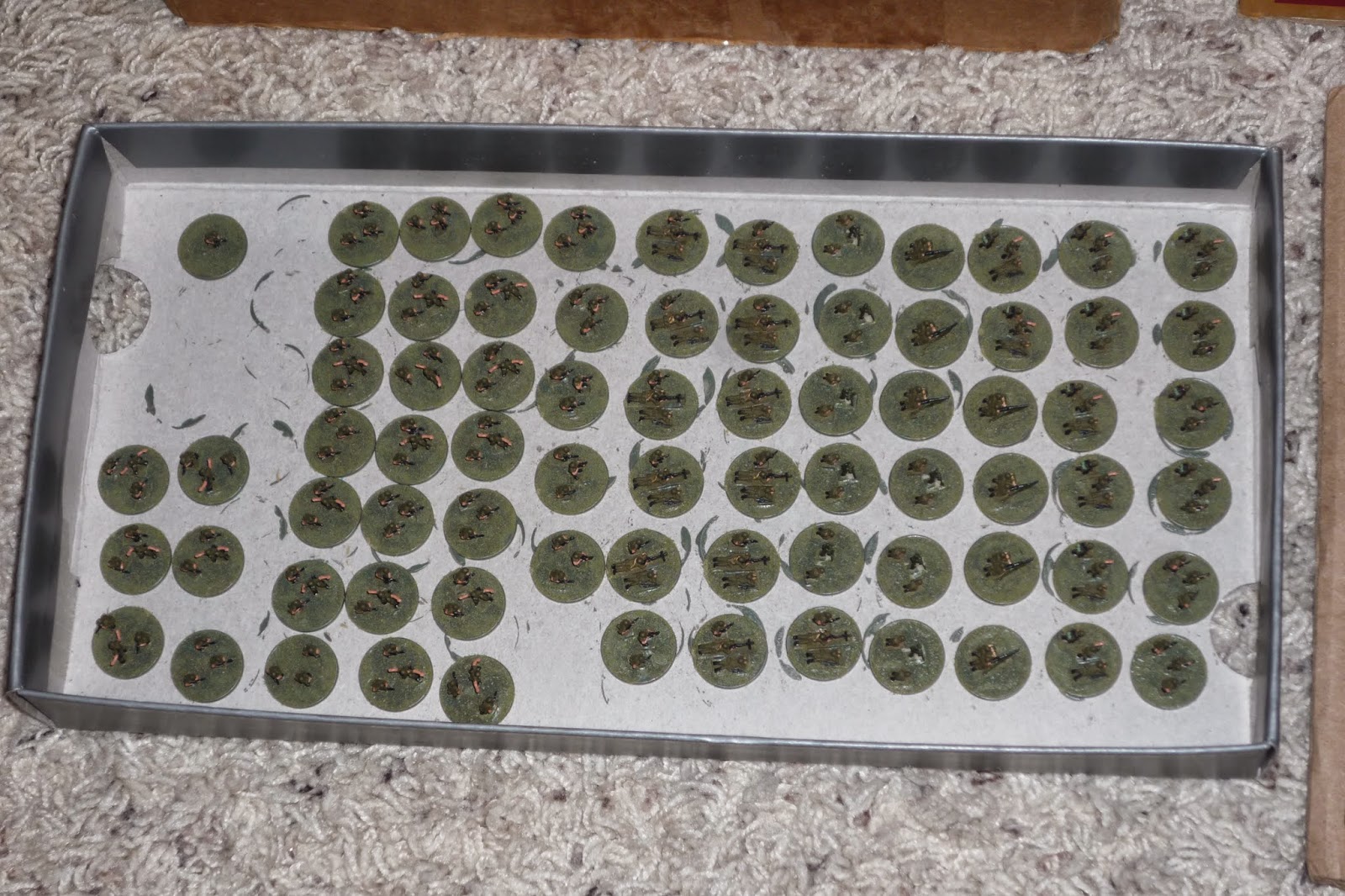 This is all my US Vietnam infantry, based on pennies.  I have no problem using them for more modern stuff, it's just now they're not based properly for what I want to do... 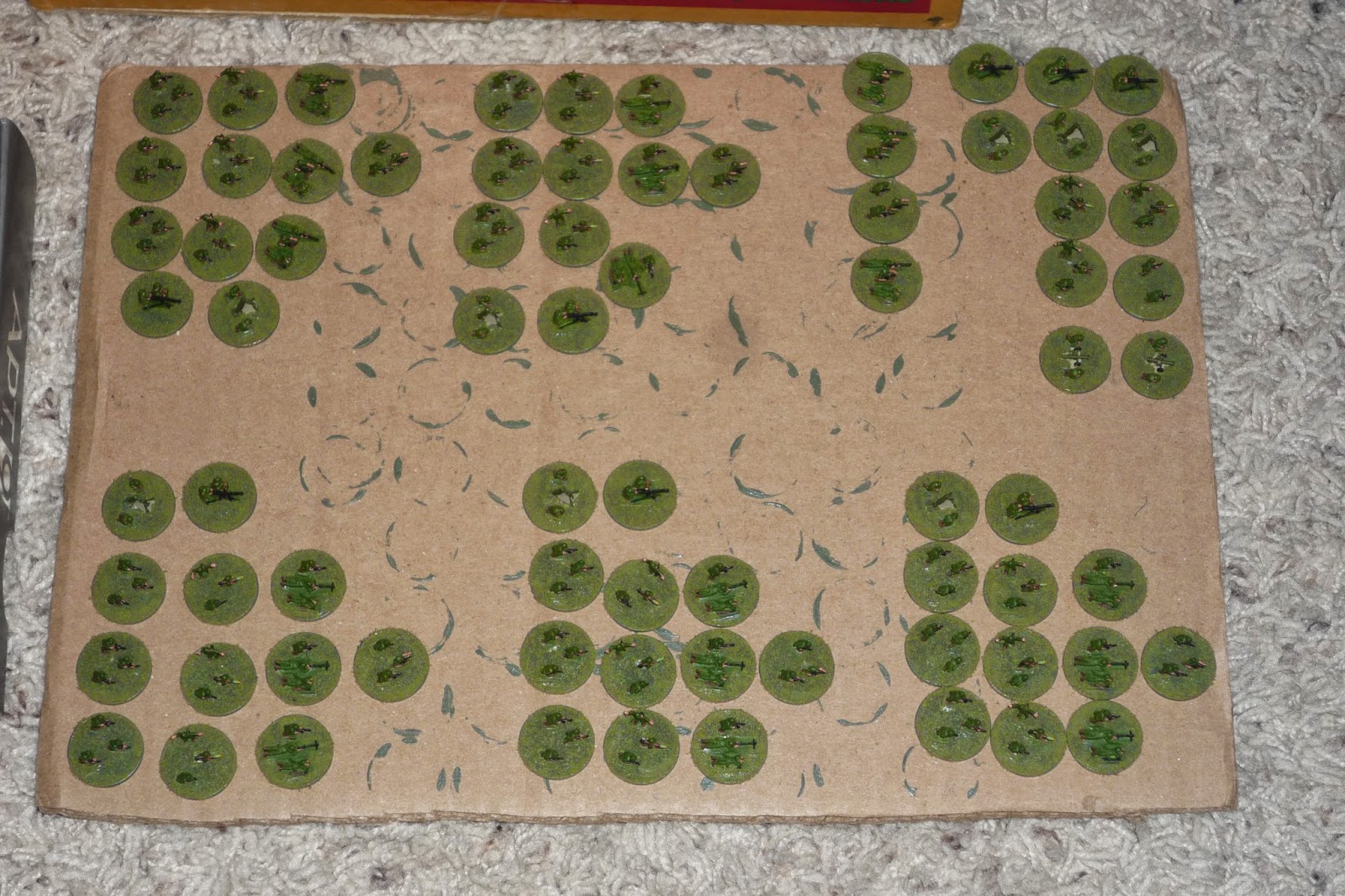 All my North Vietnamese infantry. 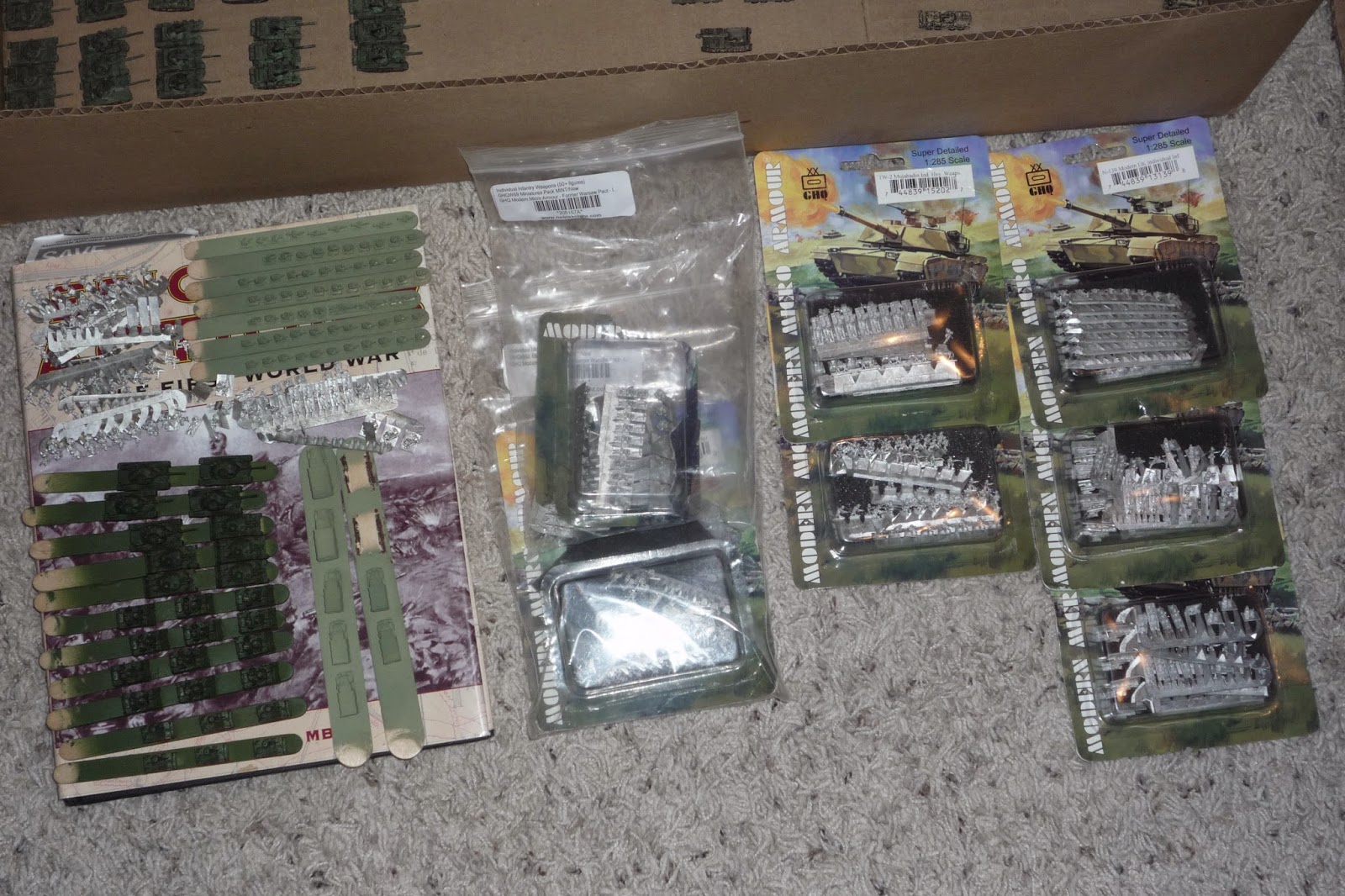 A bunch of unprepped infantry, either still in box. lying loose, or on sticks for painting. 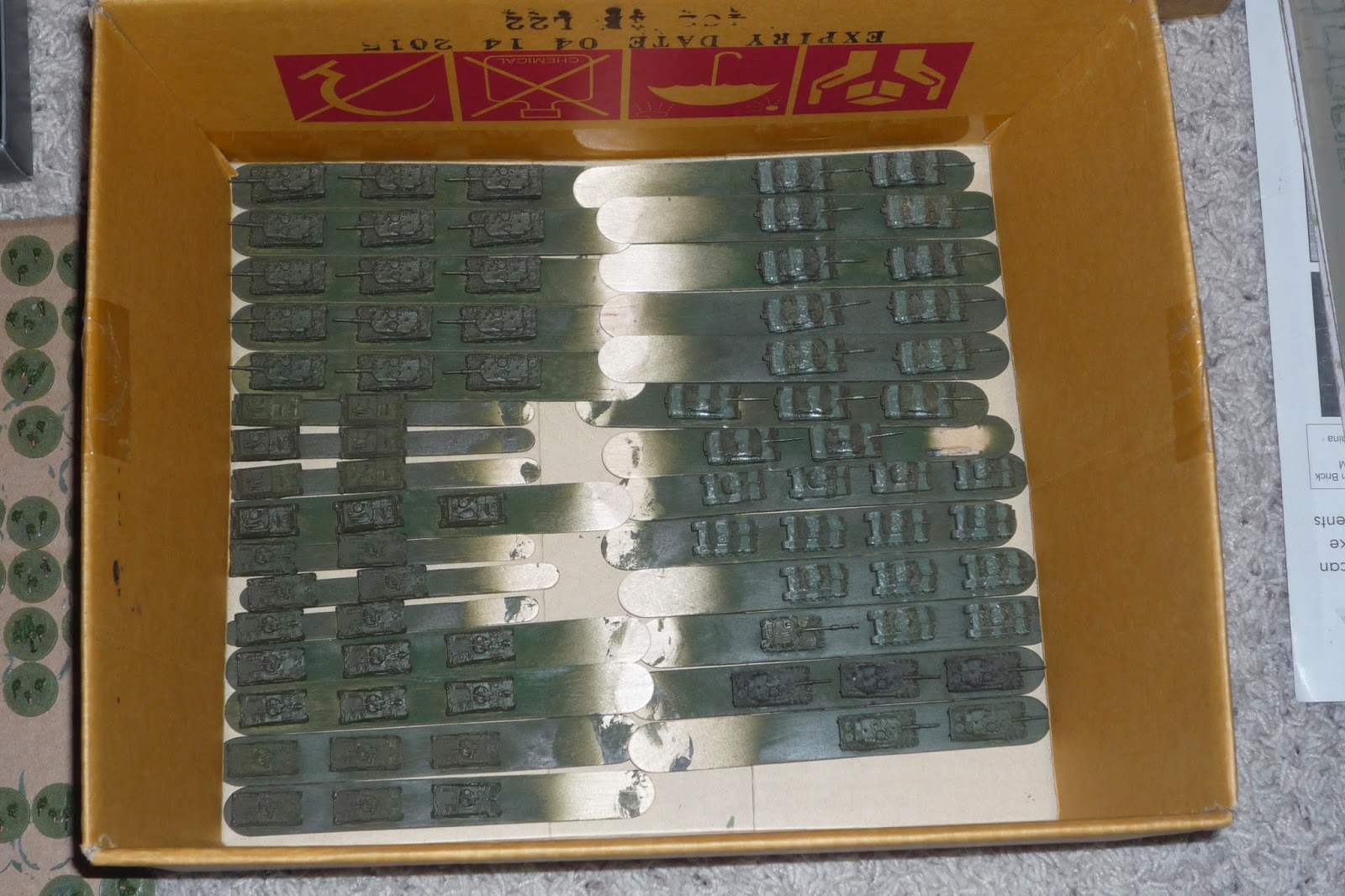 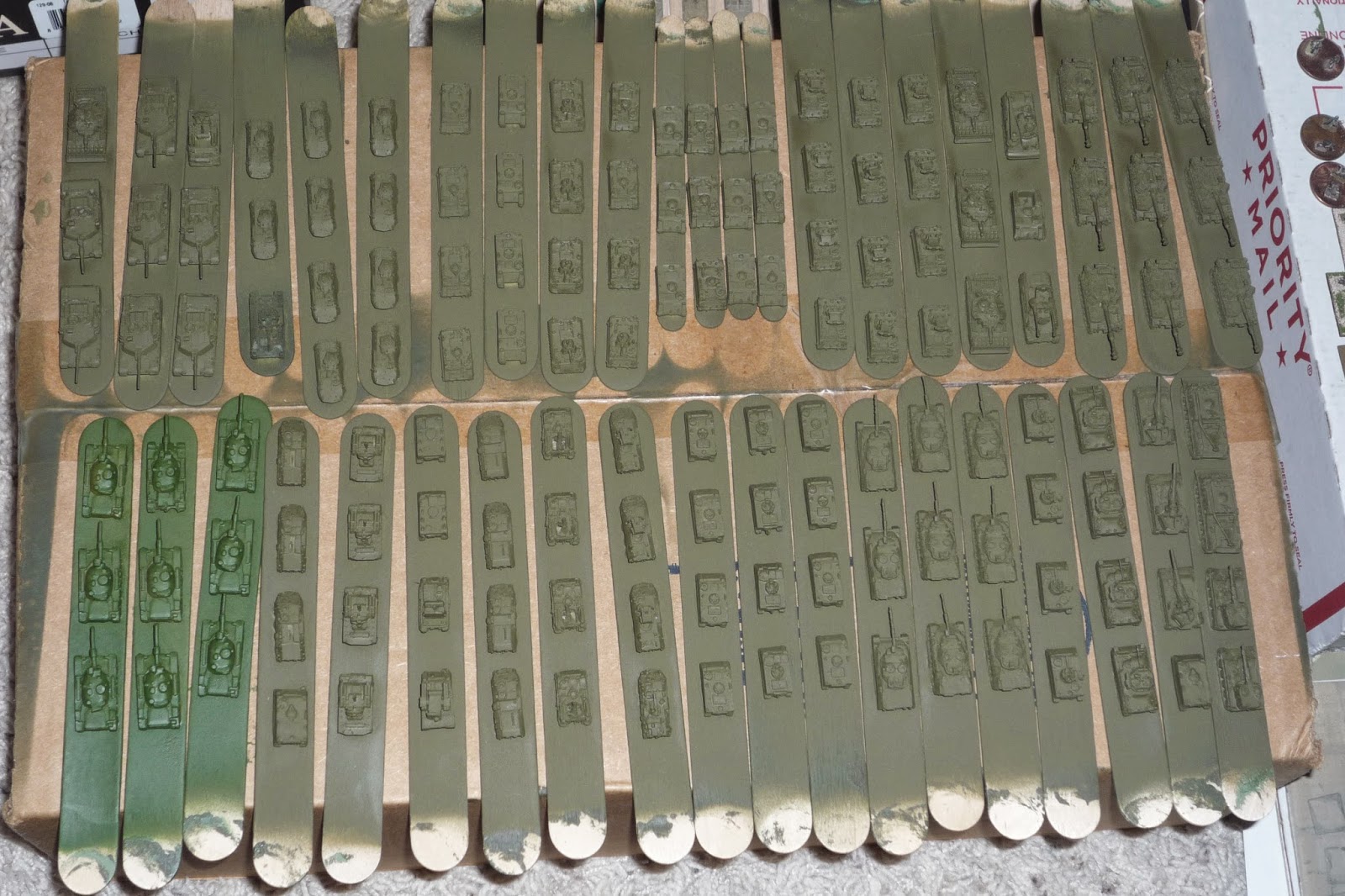 A bunch of (mostly) US stuff; a few Abrams, a few Bradleys, and a boatload of M-113s of various stripes, plus some other cats and dogs (LAVs, armored recon cars, few M-60s). 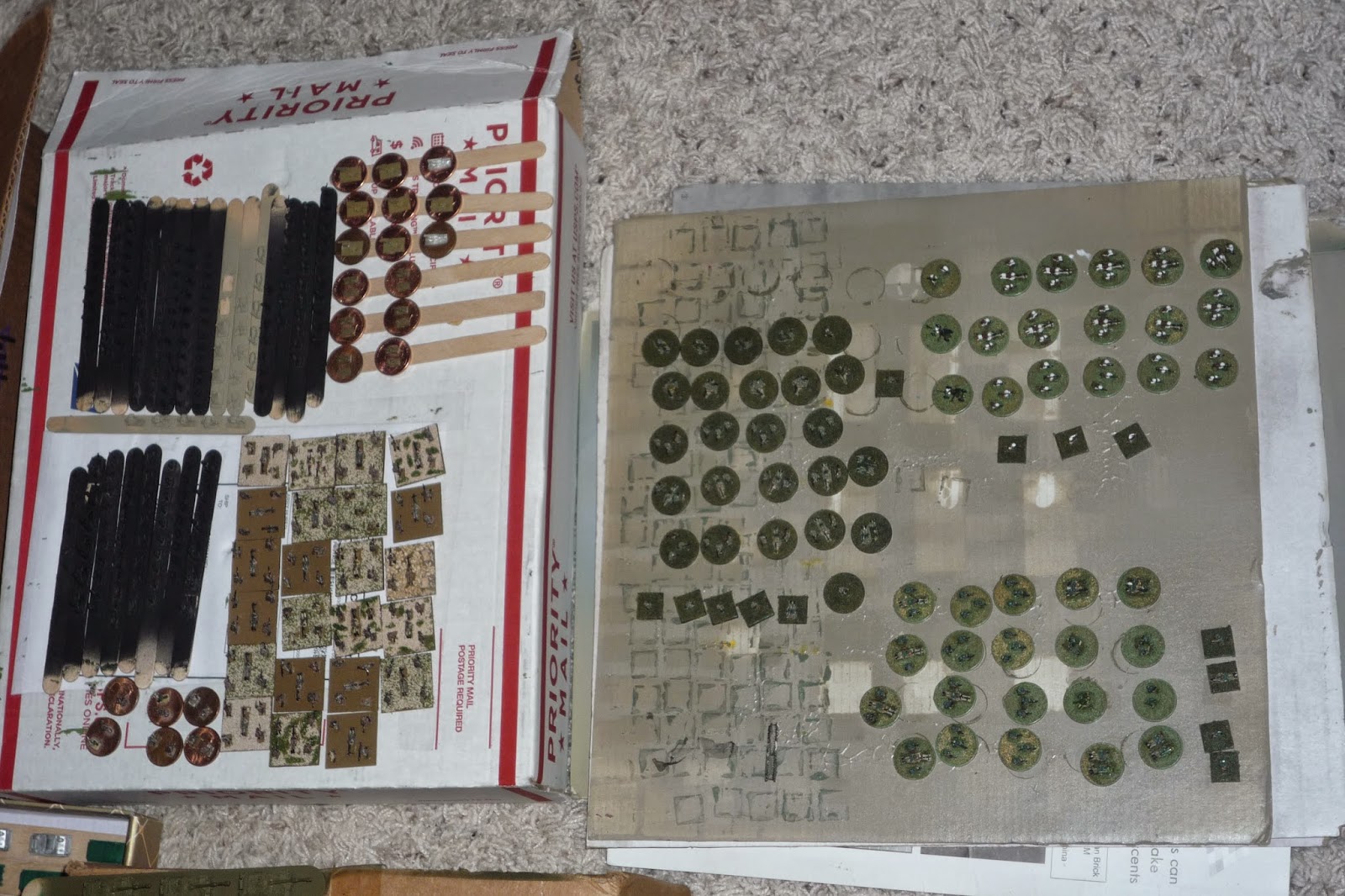 A bunch of modern infantry; modern stuff based on pennies at right, stuff that needs to be sorted at left.

And then my other project: I'm still slowly plugging away on my modern 20mm stuff that I got from Elhiem.  Fantastic miniatures that paint up pretty easily.  I finished off (minus basing, which I've yet to give serious consideration to) a team of four US modern shooters, and a squad of seven Russian/Eastern European troops. 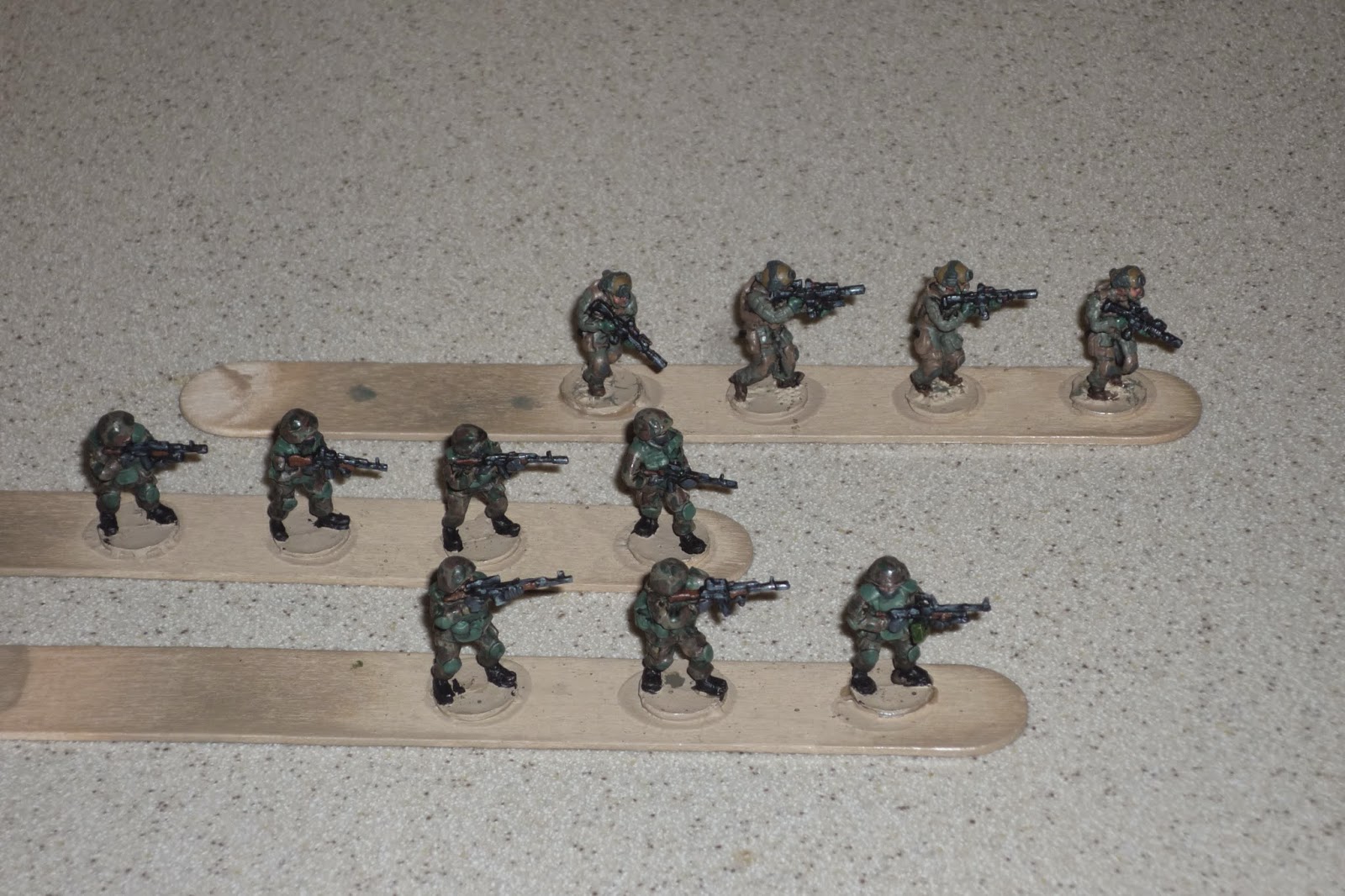 All the guys I finished, US Direct Action-types at top, two sticks of Russian troops at bottom. 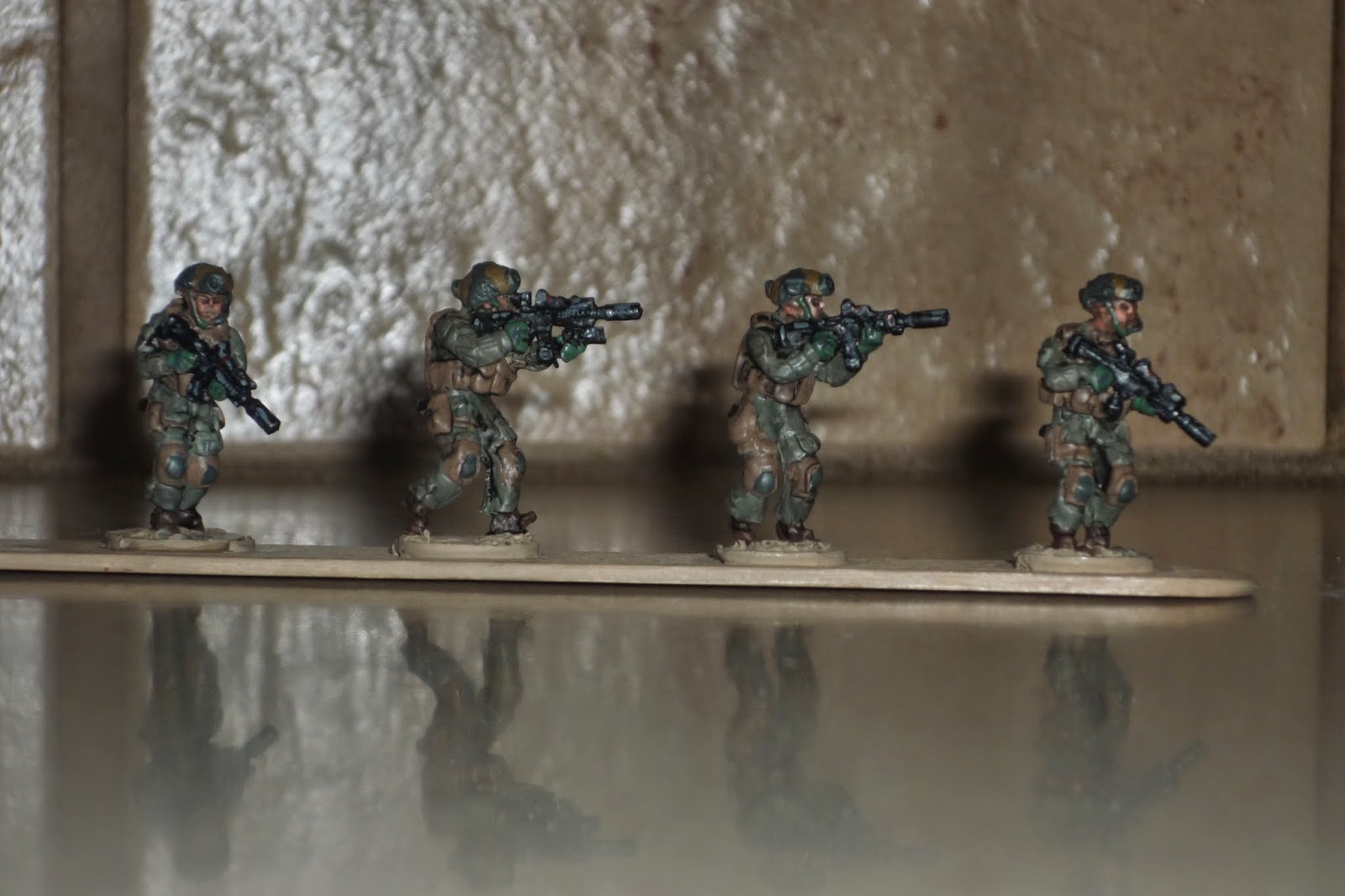 US troops up first: I kept it pretty basic, just a plain green flightsuit with tan gear over it, yellow helmet, and black rifles. 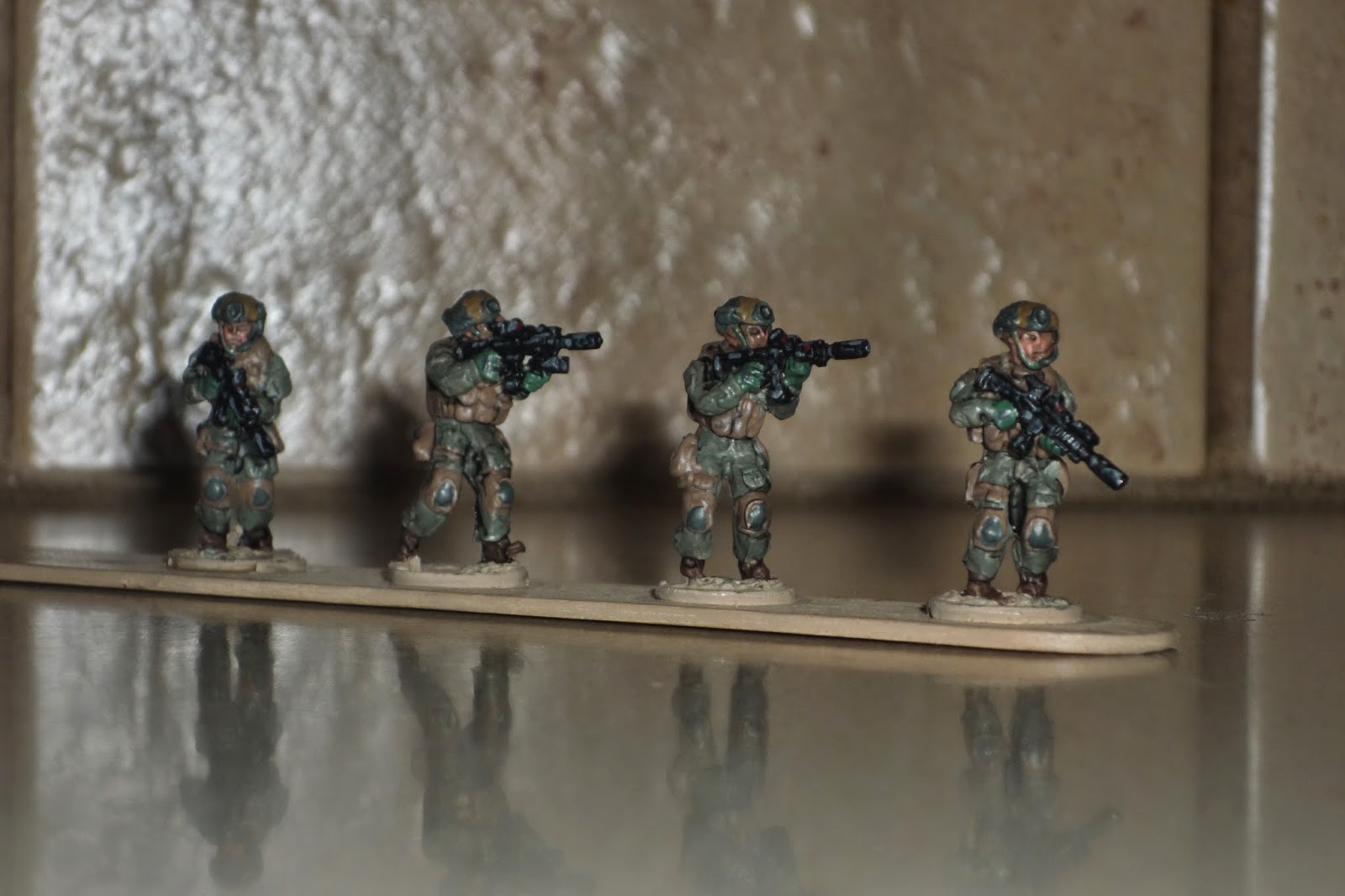 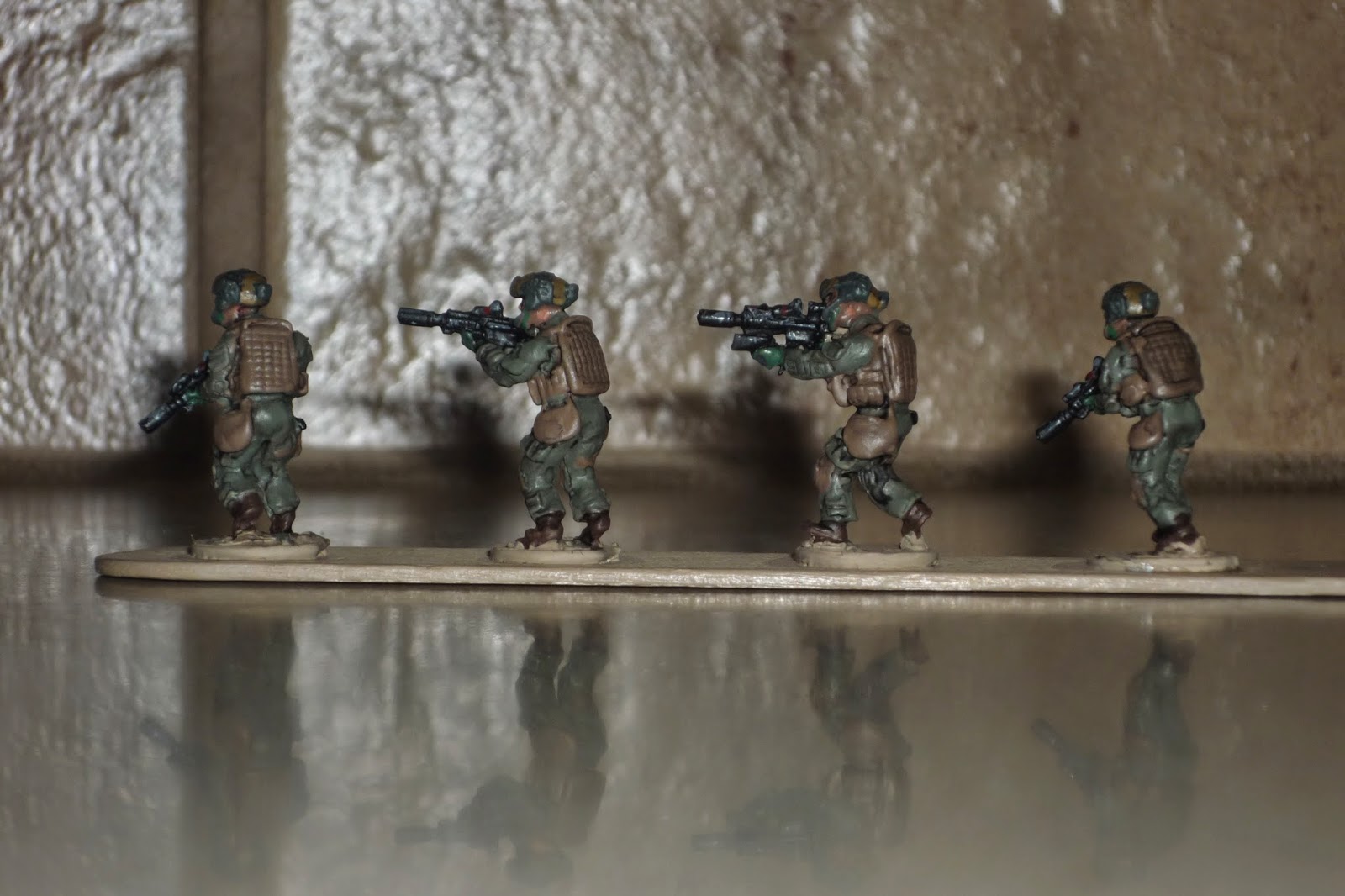 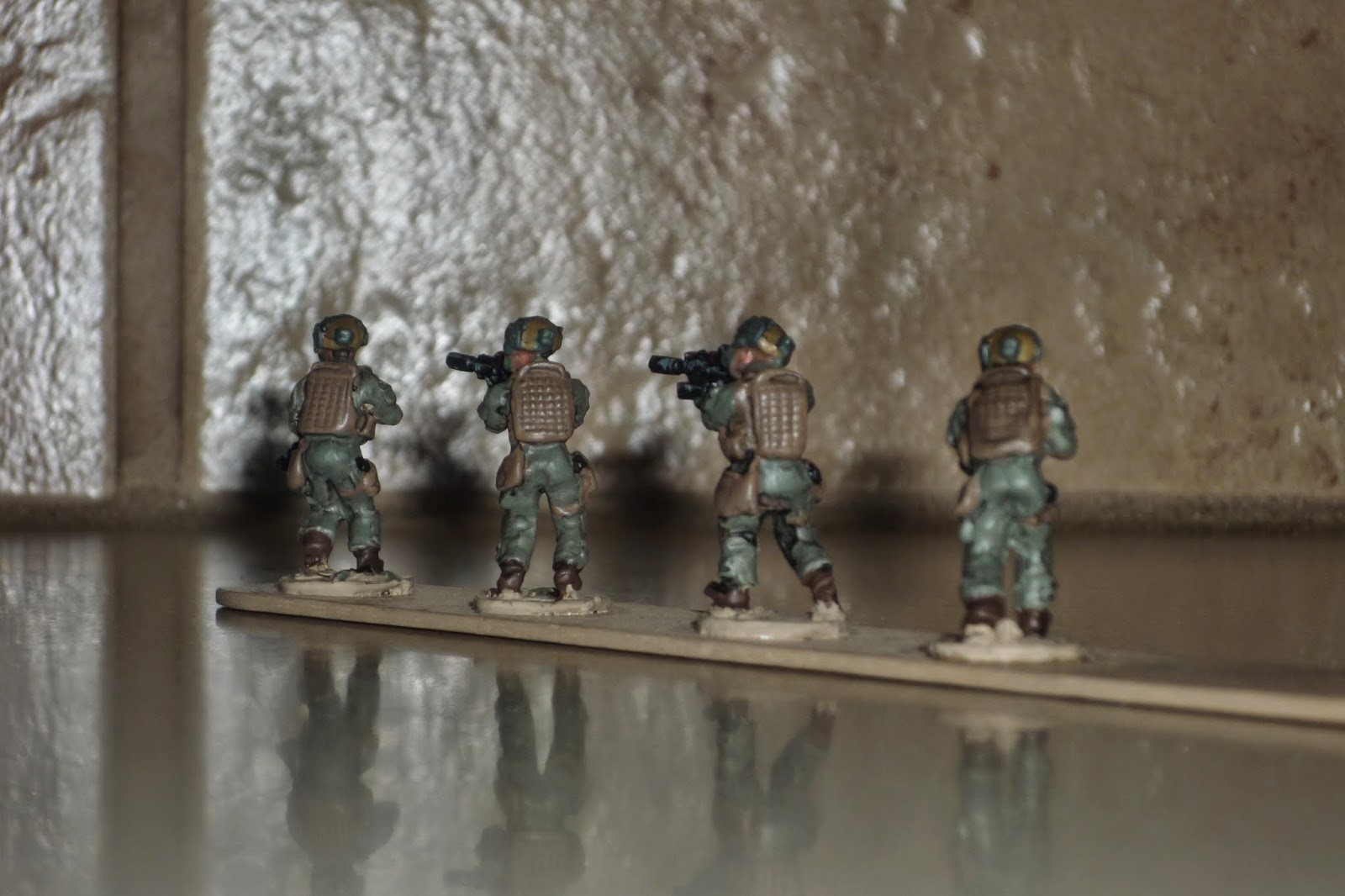 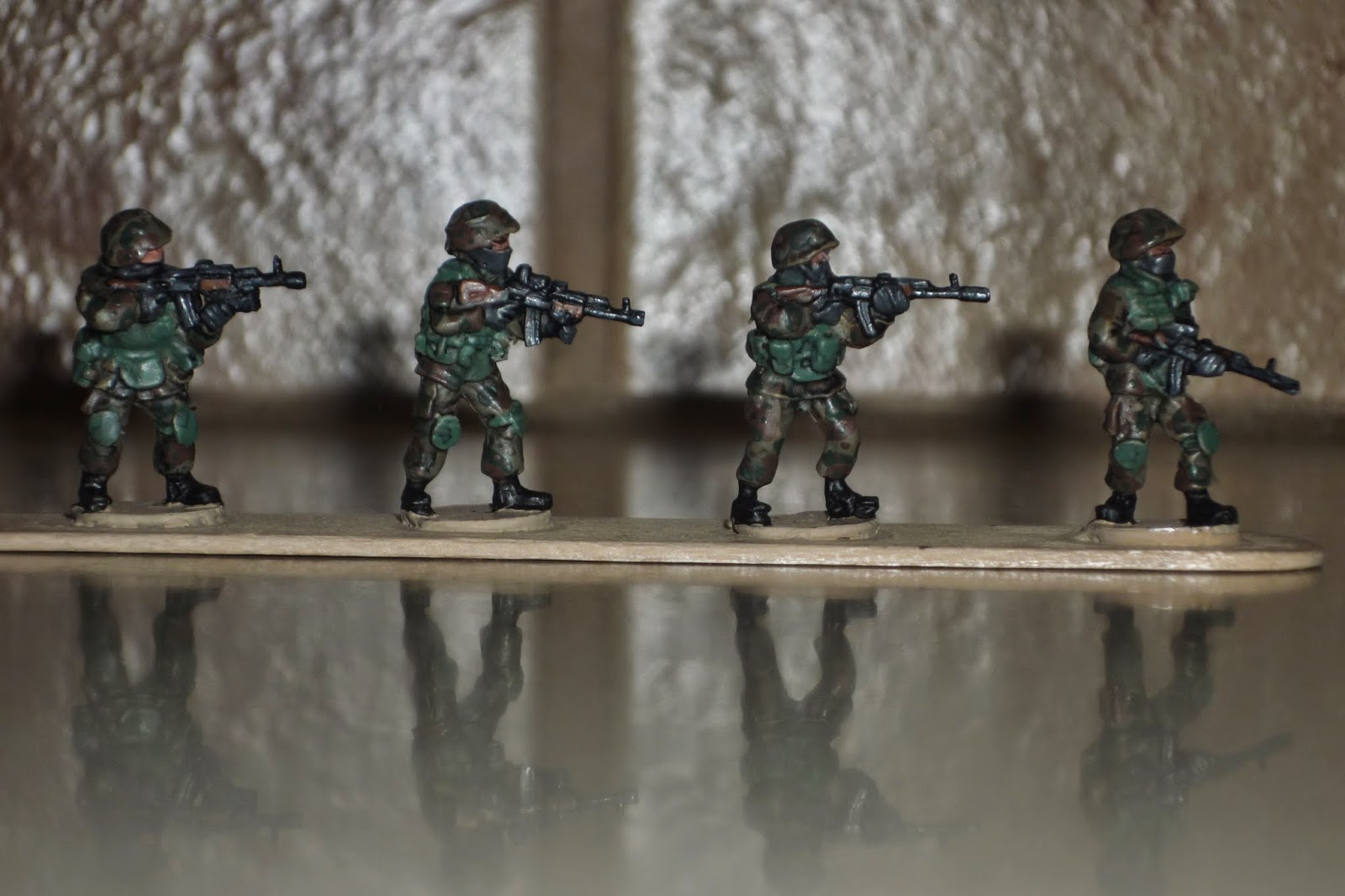 Now for some Russians.  I put some fantastic camoflage on them, but I keep putting a wash on the troops, which I think works well, but it kind of drowns out the camo.  In the future I'll probably keep this in mind and keep the uniforms more simple.  Or at least I should, but I probably won't.  As it is, you can't really see the camo, even in real life, much less in the pictures.  But I spent a lot of time on it, and it looked great I tell ya! 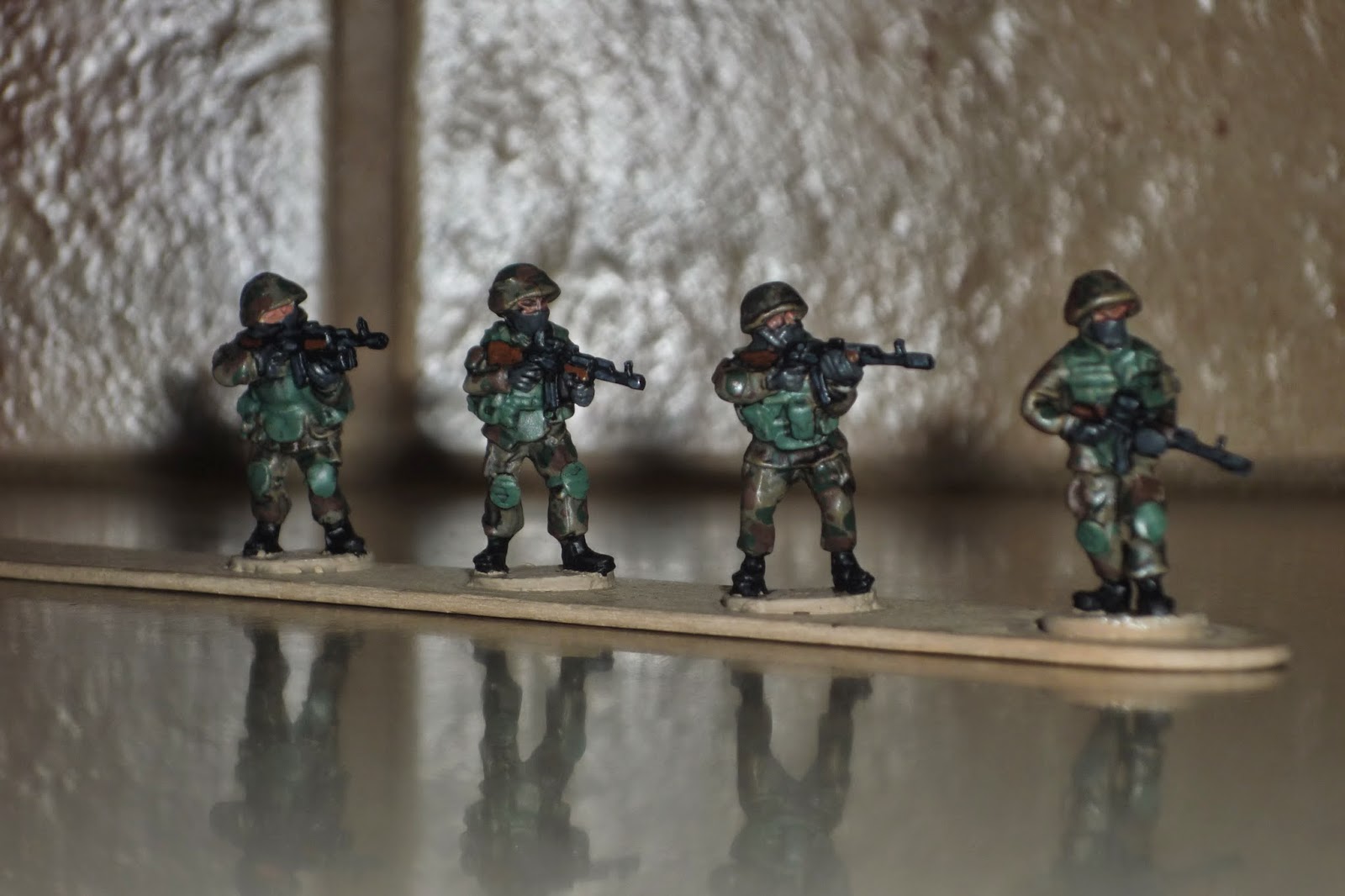 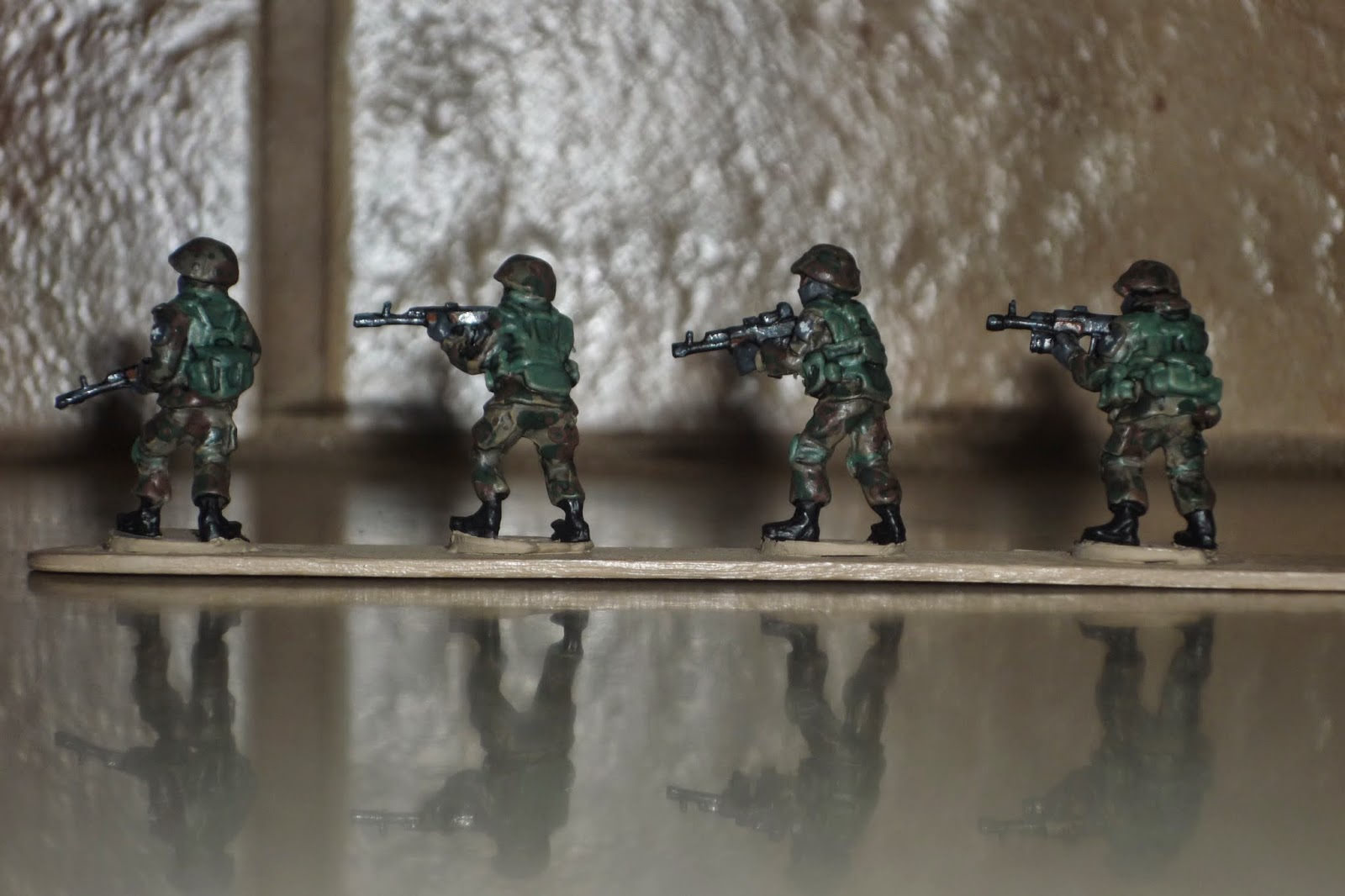 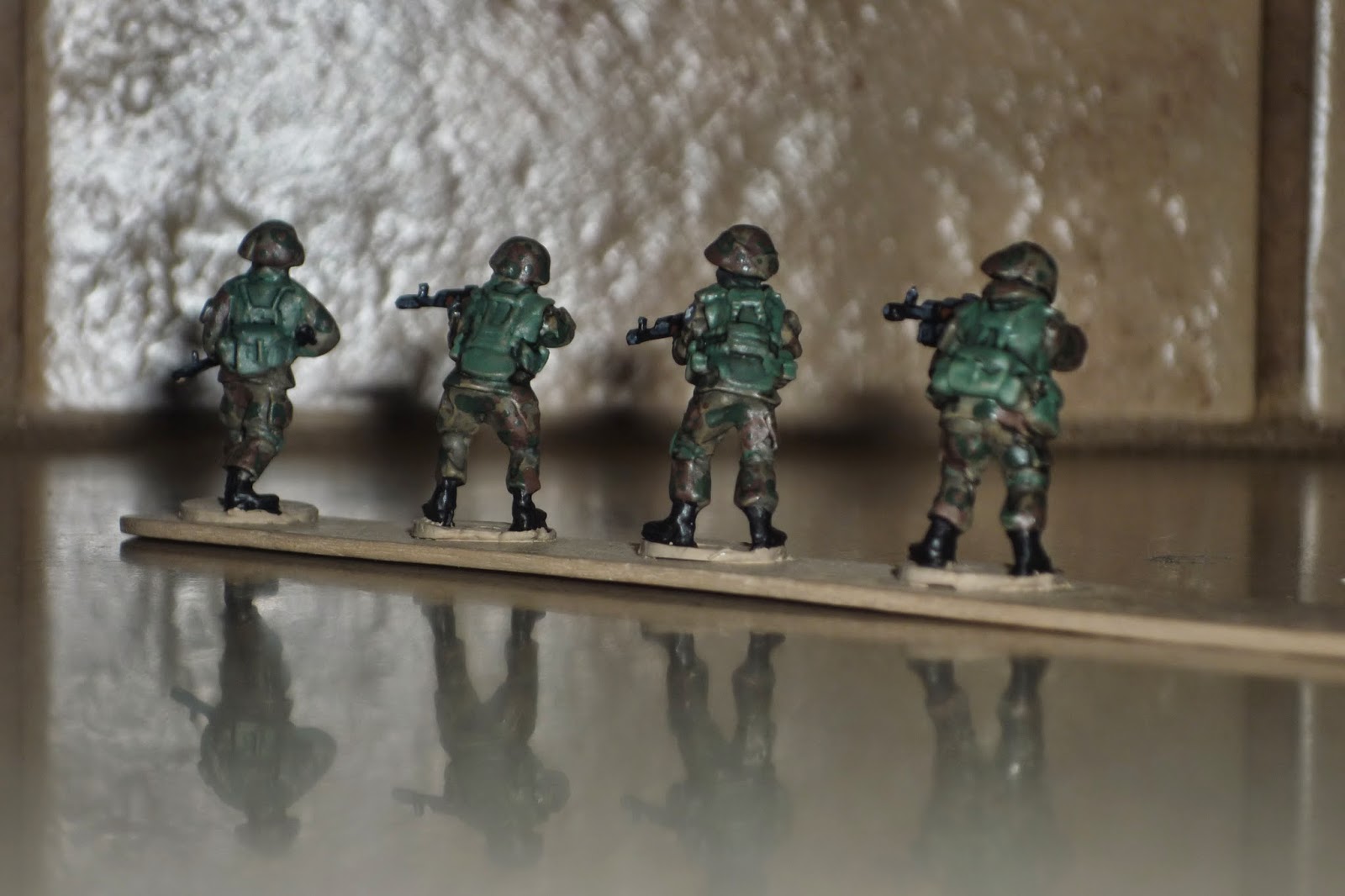 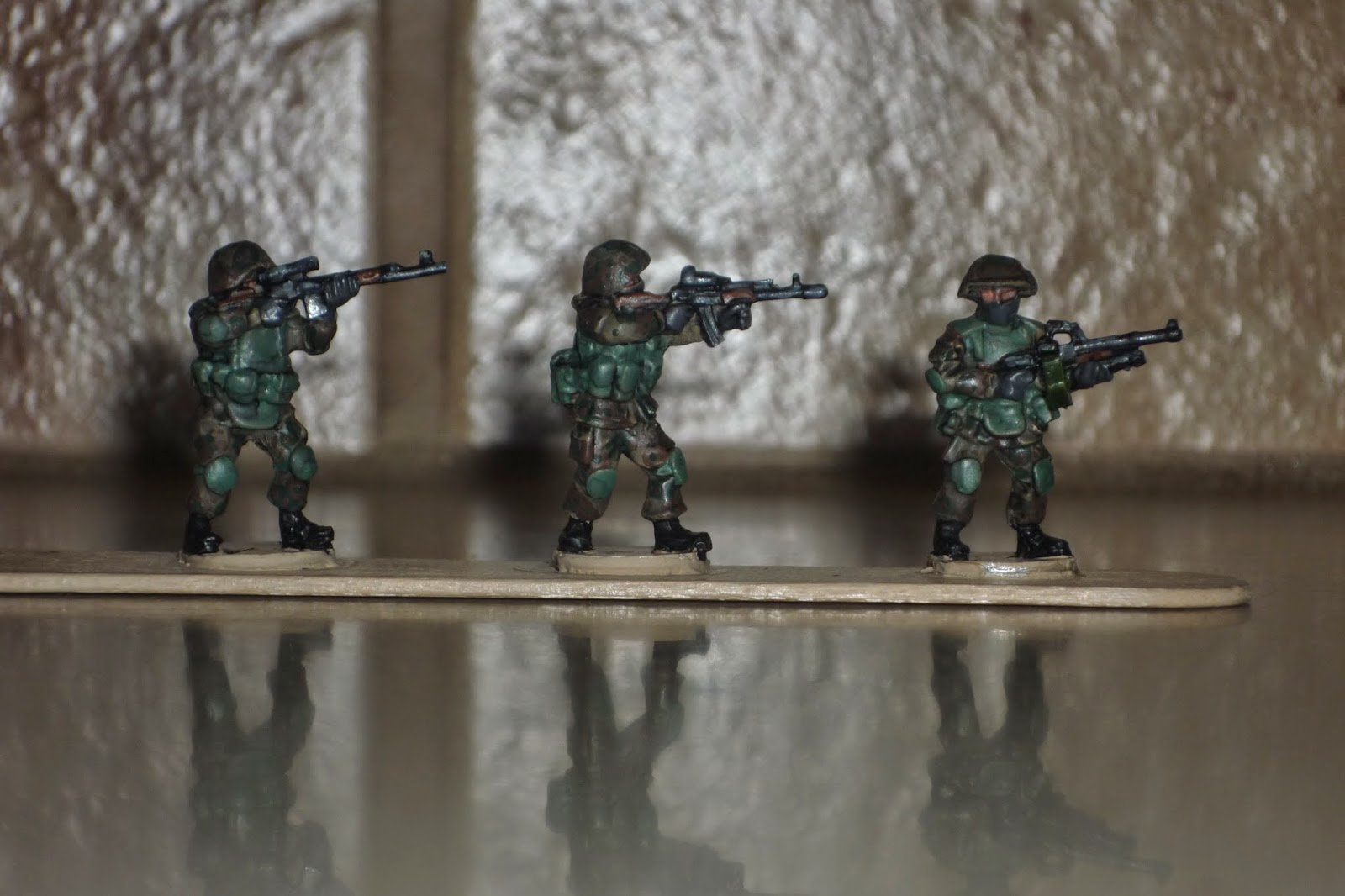 The other stick, with a Dragunov, an AK, and a PK machine gun. 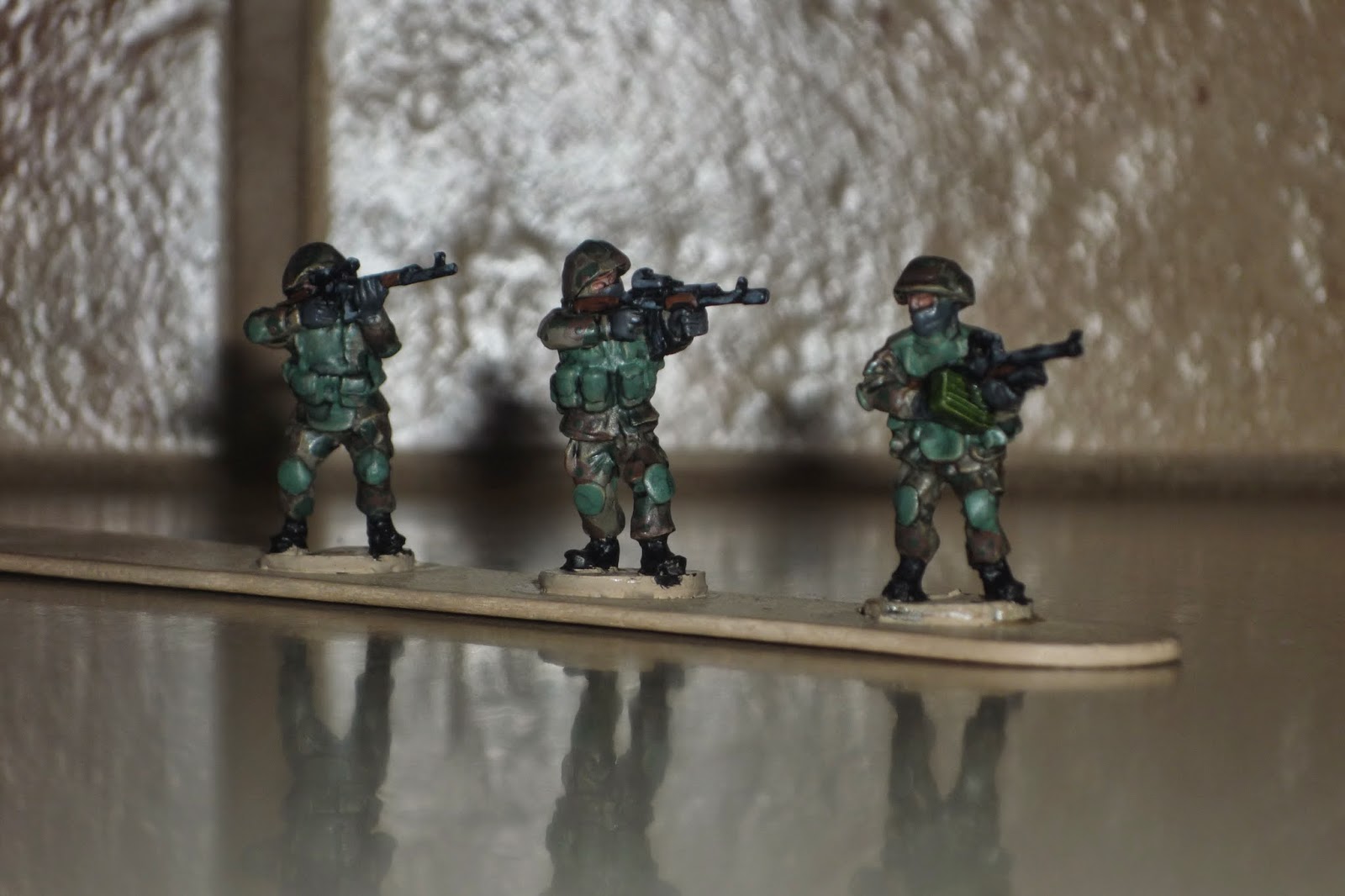 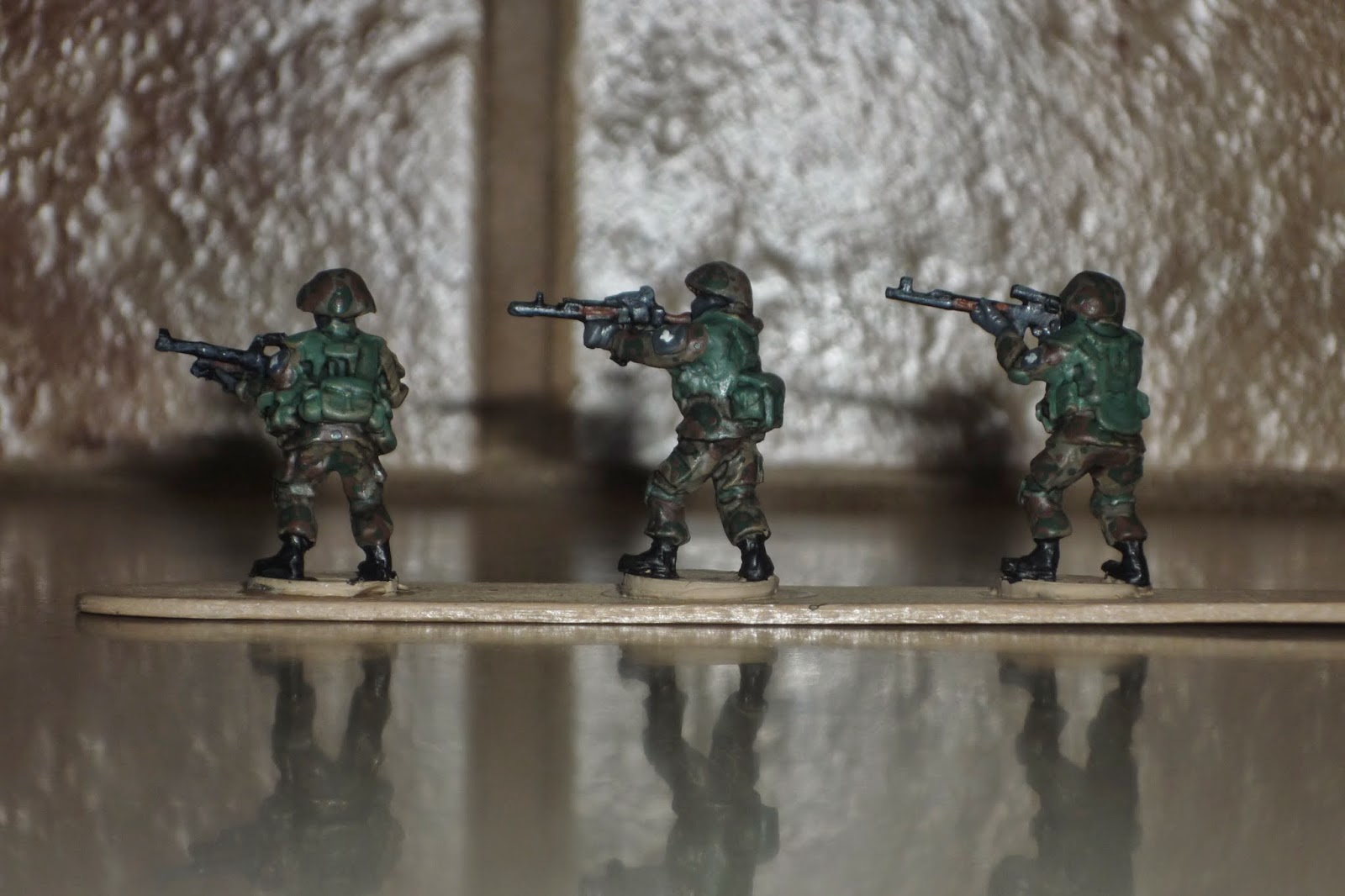 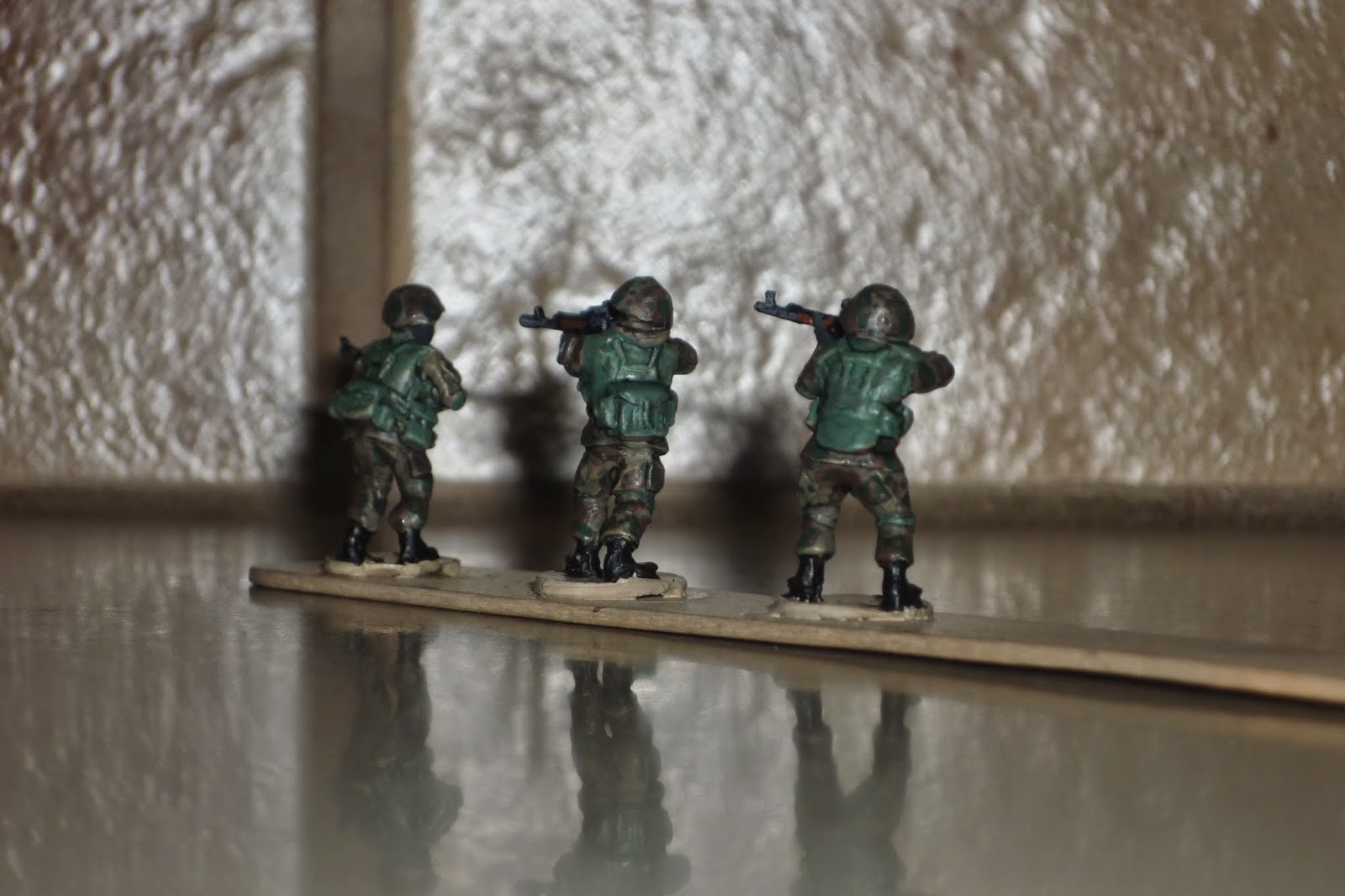 Now that I've got enough of these guys painted up to actually have a small skirmish fight, I need to think about 1) basing (maybe put them on quarters?), and 2) terrain, so they have something to hang out on that looks more appropriate than the kitchen counter...

In any case, I've got a three-day weekend, so I'll look to put in some serious mileage on my Poland campaign.  Stay tuned folks, there's always something going on here ;)