It's 1000, 1 Sept 1939, and KG Klink is in disarray, having just been thrown back from the village of Mokra by strong anti-tank defenses of the Polish 21st Uhlan Regiment.  As the KG is regrouping, the Polish 21st Armored Regiment and 12th Uhlan Regiment counterattack the 4th Panzer Division, which also was treated roughly by the defenders of Mokra.  One of the Polish counterattack columns strikes just south of the KG's last attack, right at the operational boundary of one of 4th Panzer Division's Panzer battalions and KG Klink.  Seeing the potential calamity, Maj Schultz grabs an ad-hoc force comprising 2nd Panzer Platoon and 4th Grenadier Platoon, and charges southeast to meet the enemy counterattack head on.

*I changed the rules here a bit: as is often the case with rules I play, I love the idea of reaction fire (and 5Core rules have "snap" and "guard" fire) but don't often find myself using it in games that haven non-IGOUGO formats, as it's often not necessary in terms of realism.  I pretty much only use Snap fire, and only then to allow an unsuppressed (hunkered) unit to fire at a unit that's charging it.

But I wanted to better reflect the fluid nature of tank battles, I decided to that if a tank fired on another, and that tank wasn't destroyed or forced to fall back, the targeted tank could return fire 'for free.'  In my opinion/mind, this reflected the tank fights I've read about, where fights are lethal, and I didn't want tanks not returning fire because activation didn't work out.

The guard fire mechanic could have worked, but you run into three issues: 1) the relatively short range of guard fire meant the activating tank could fire, but the non-activated tank would be out of range; 2) guard fire only uses shock dice, and tanks should be able to kill each other at all times (I believe); and 3) the non-activating tank would actually fire first, and I wanted the activated tank to have the advantage, but the non-activating tank to be able to strike back if the activated tank missed.  Then he could fire when he activated, and if he missed, the original tank would be able to return fire.  This seemed to fit with my reading/idea of tank duels, so only the two engaged vehicles got to play in this mechanic (i.e, not another tank that was nearby). 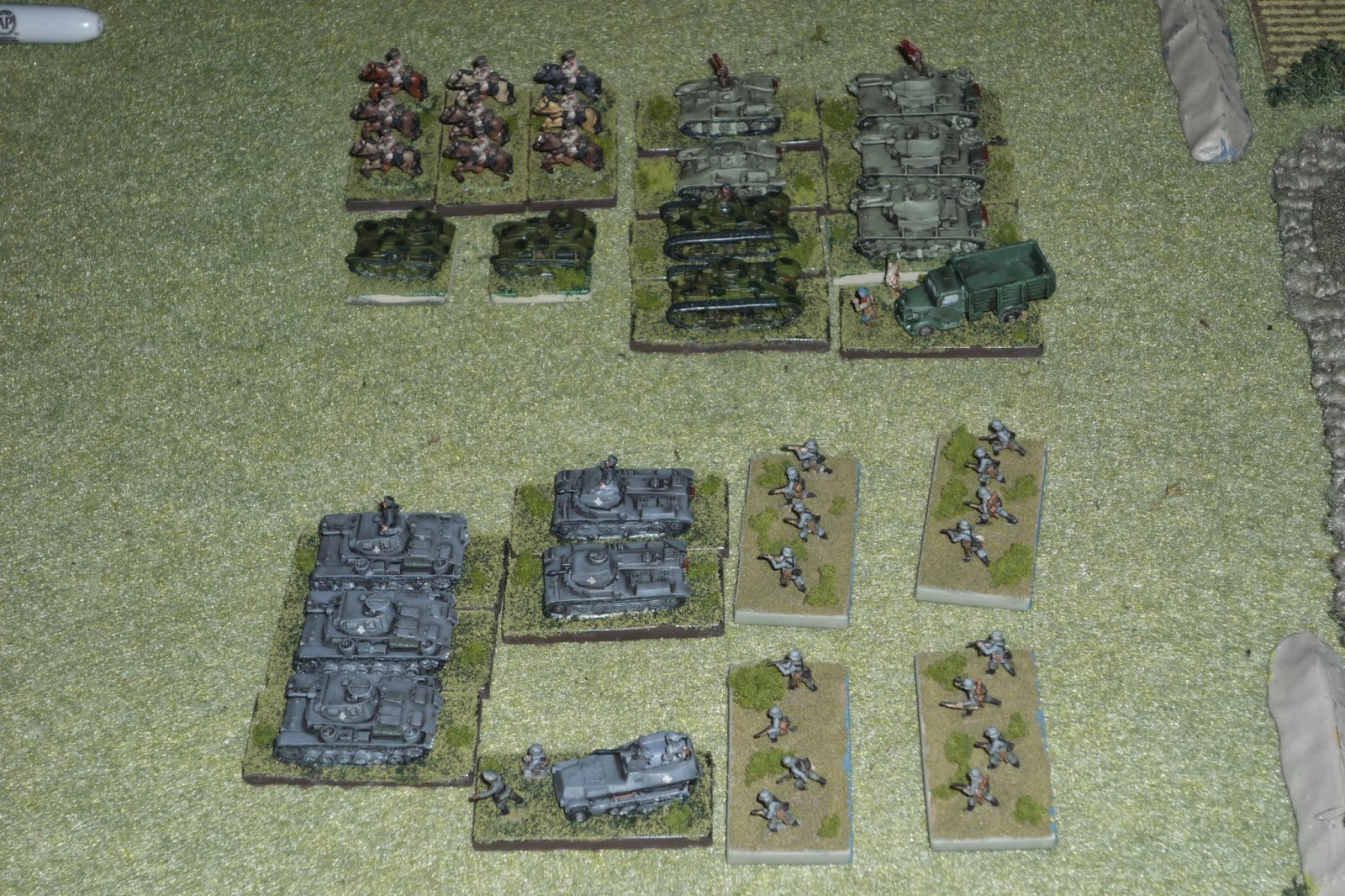 The opposing forces, very armor heavy; I'll give up the ghost and let you know that the Germans lose (again), but it's the infantry that almost (almost!) save the day... 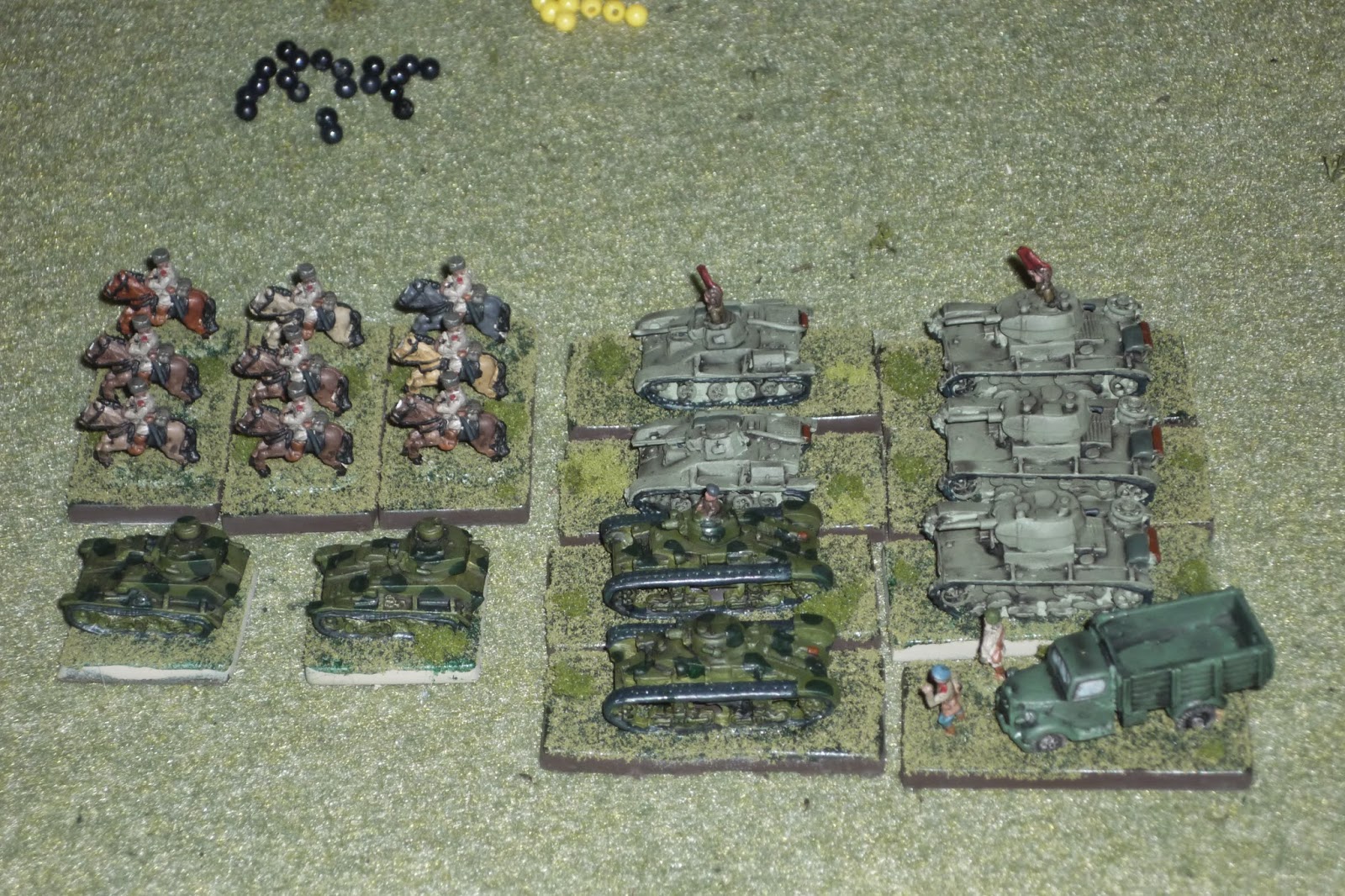 The Polish force.  I apologize for my hideous use of proxies here, but I don't have any Polish tanks.  So, this is very ahistorical, but I'm doing the best I can, and this is probably the only fight that we'll see Polish tanks in.  The Poles have their CO, three squads of cavalry, three medium tanks (T-26s), two light tanks (T-70s), two infantry tanks (Matilda Is), and two tankettes (Vickers, which I think the Poles actually had some of).  Hold your nose and bear with me, it's a good fight. 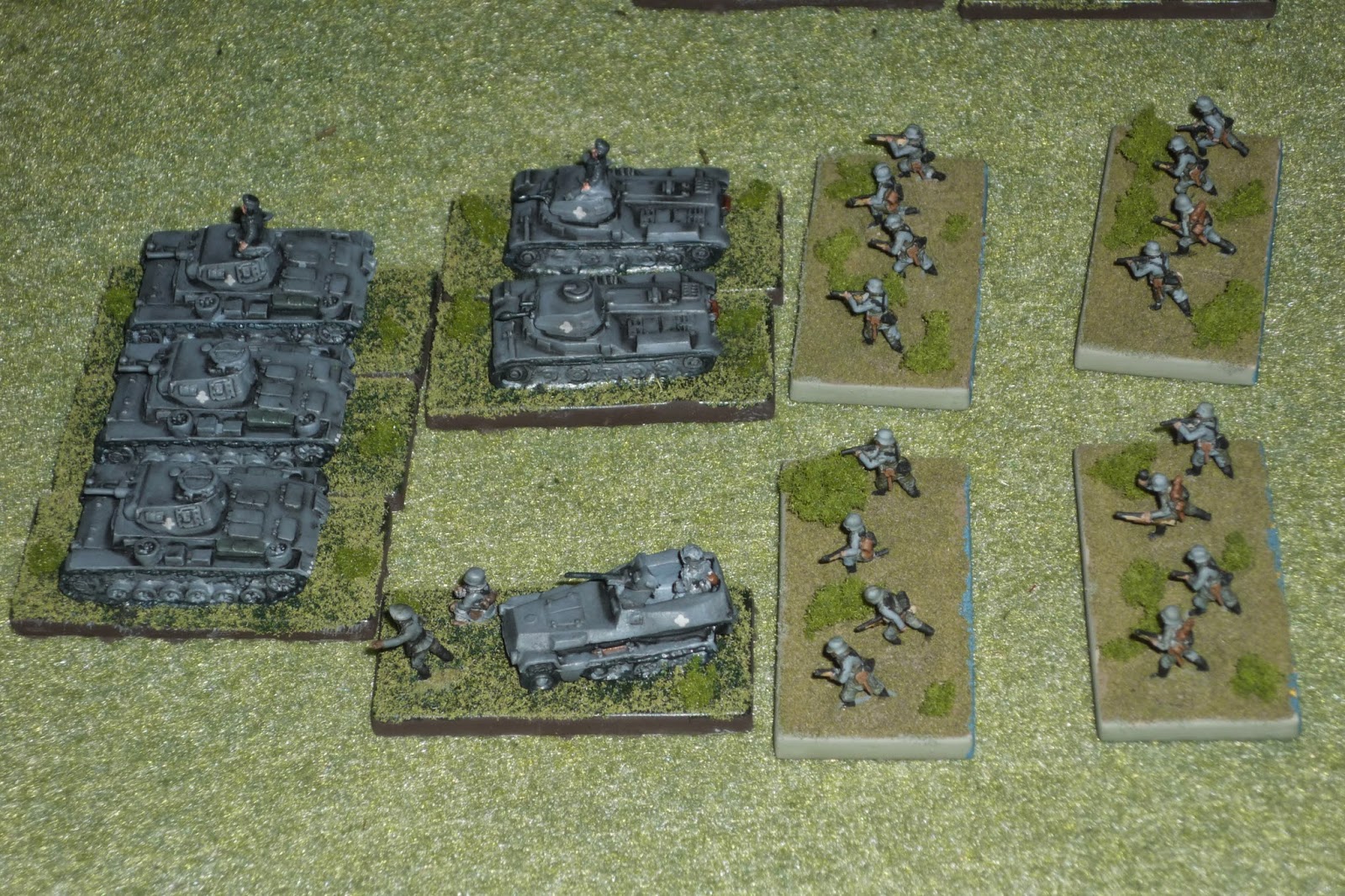 Ze Germans: CO for this fight is Major Schultz, the KG Executive Officer, with 2nd Lt Schiffer's 2nd Panzer Plt (of 3 Pz IIIs and 2 Pz IIs) and Officer Cadet Vetter's 4th Grenadier Platoon (of four rifle squads, though Cadet Vetter actually missed the fight as he was aiding Col Klink with the regrouping when Maj Schultz grabbed his platoon and sprinted southeast into the fight). 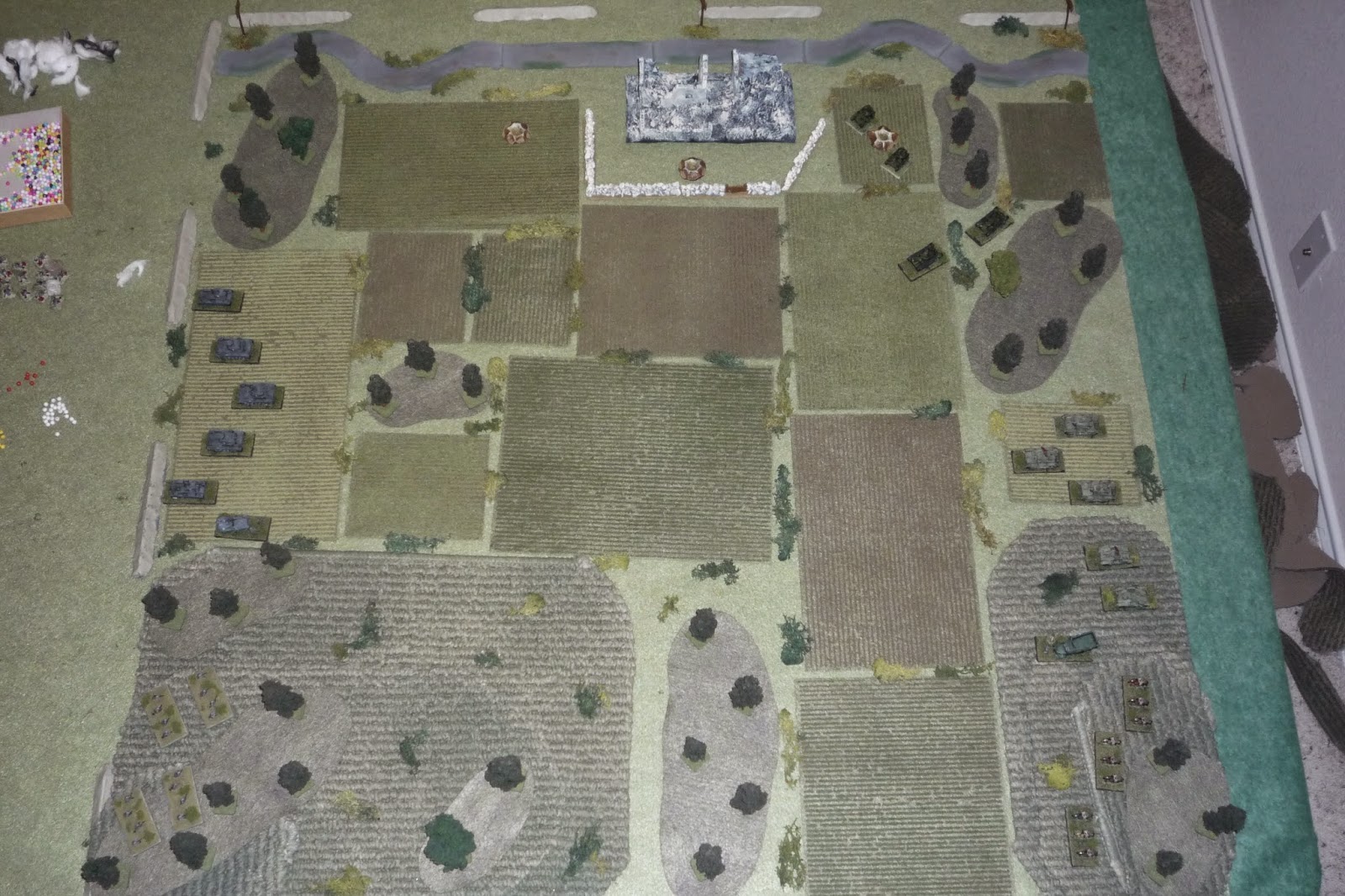 Overview, north is up, Germans on the left (west) and Poles on the right (east). 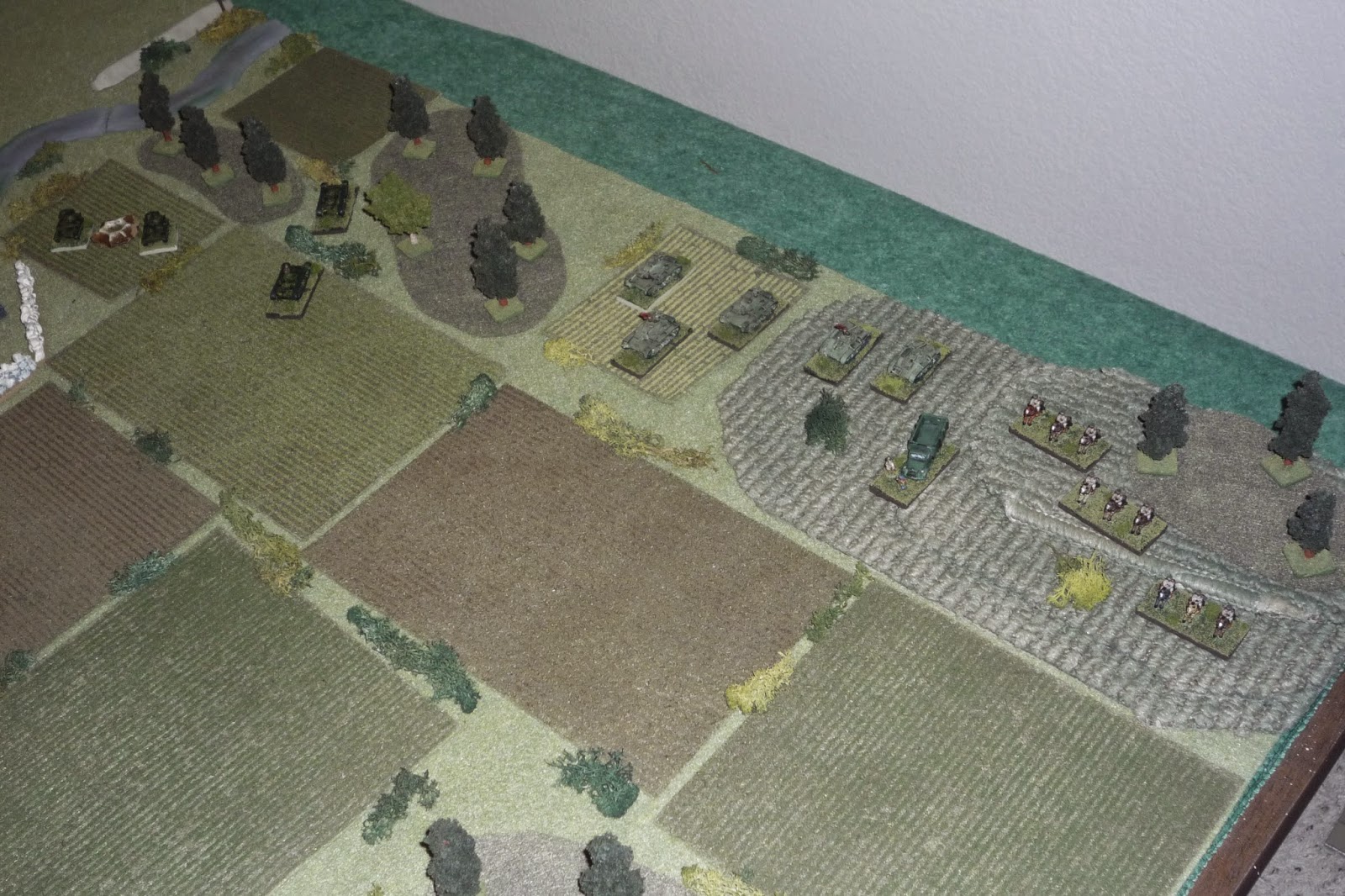 The Poles, with armor across the board (Vickers in north, then infantry tanks (Matildas), then medium tanks (T-26s) then light tanks (T-70s) and cavalry in the south. 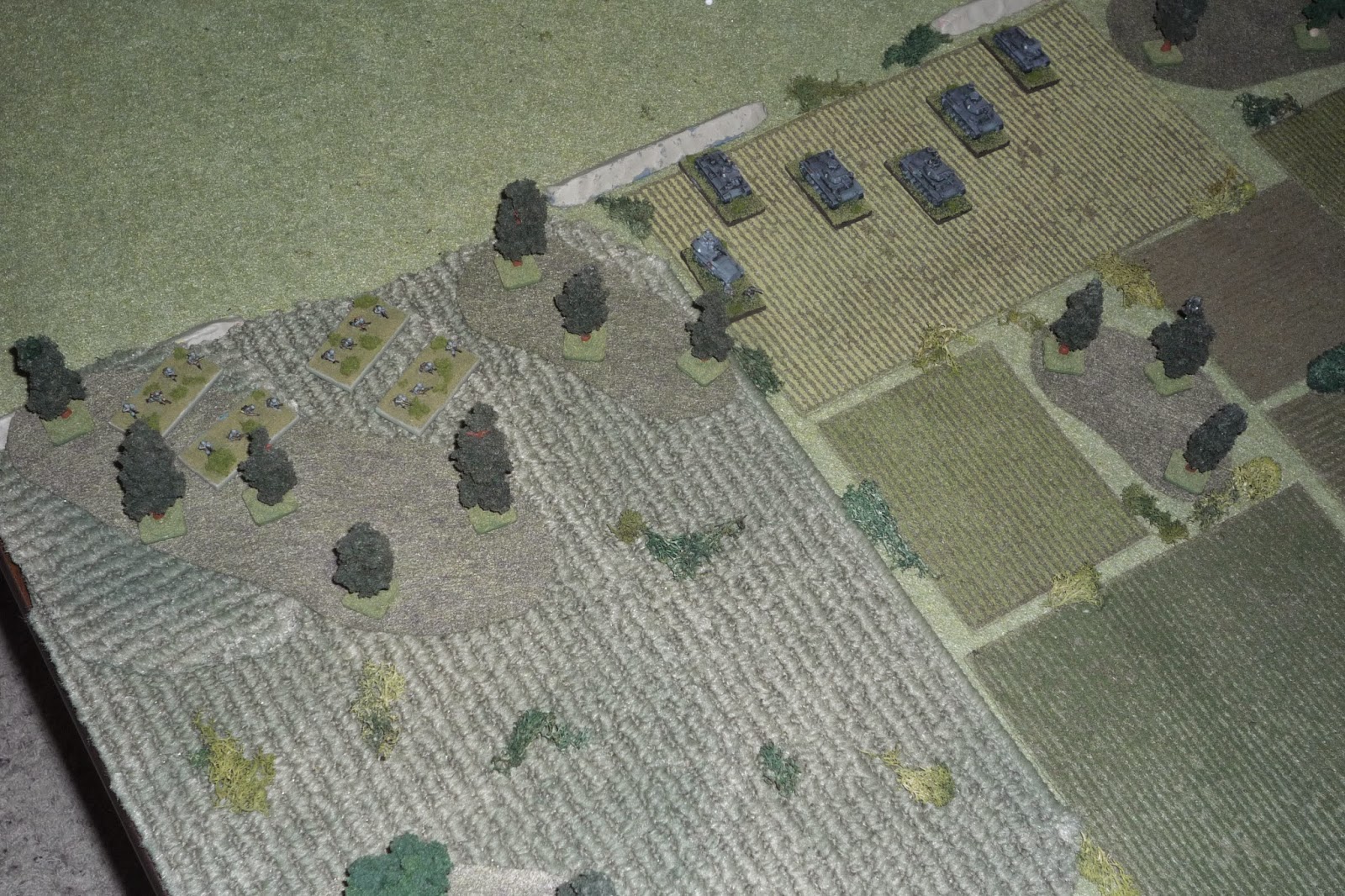 The Germans, with armor in the north and infantry in the south. 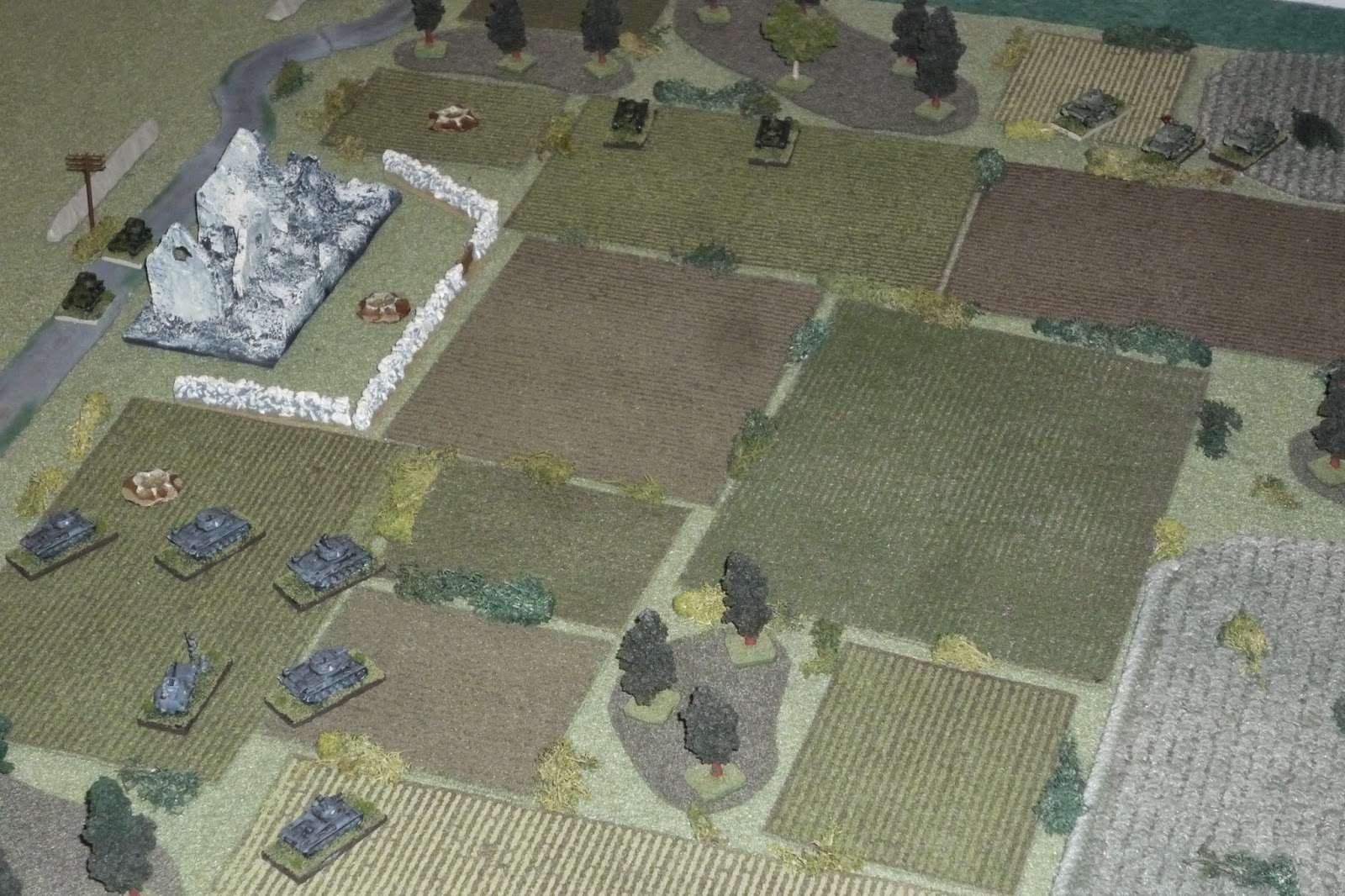 As always, the Germans go first, and as is becoming my custom, they roll a scurry (a '1,' if that shows you my skill/luck with dice rolling).  The armor and Major Schultz move left, looking to close off their left flank and keep the enemy armor in front of them, though the two Polish tankettes (top left) advance up the highway while their infantry tanks squeeze through the gap in the trees and shake out into line to do battle (top center). 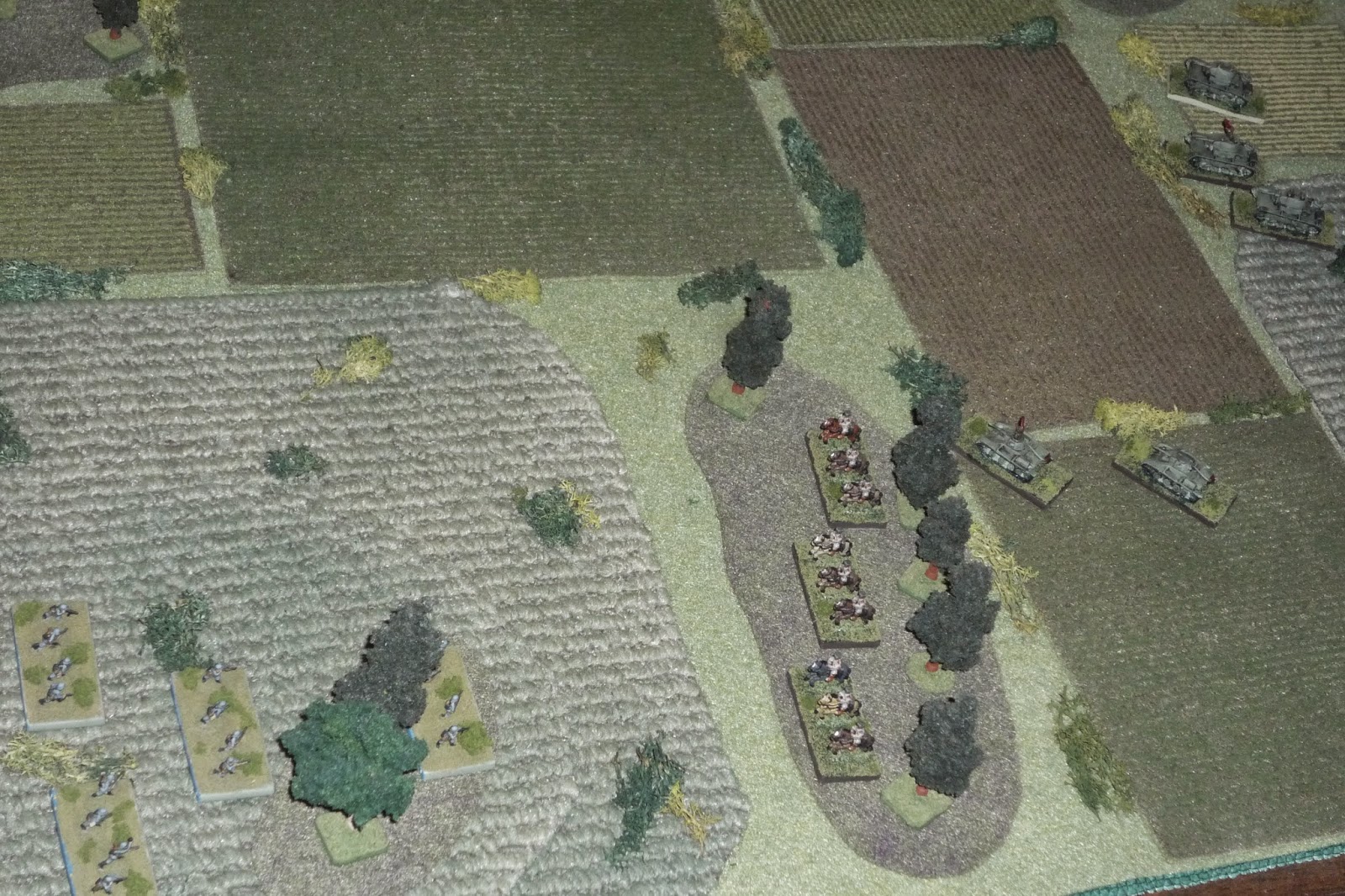 In the south, the infantry sprint forward (bottom left), while the enemy cavalry does too.  Their light tanks take up station just behind the cavalry, while their medium tanks come on line (top right).  This scurry was definitely to the Poles benefit as, unless they roll a scurry, they've now deployed their forces into line and will get the first shots in... 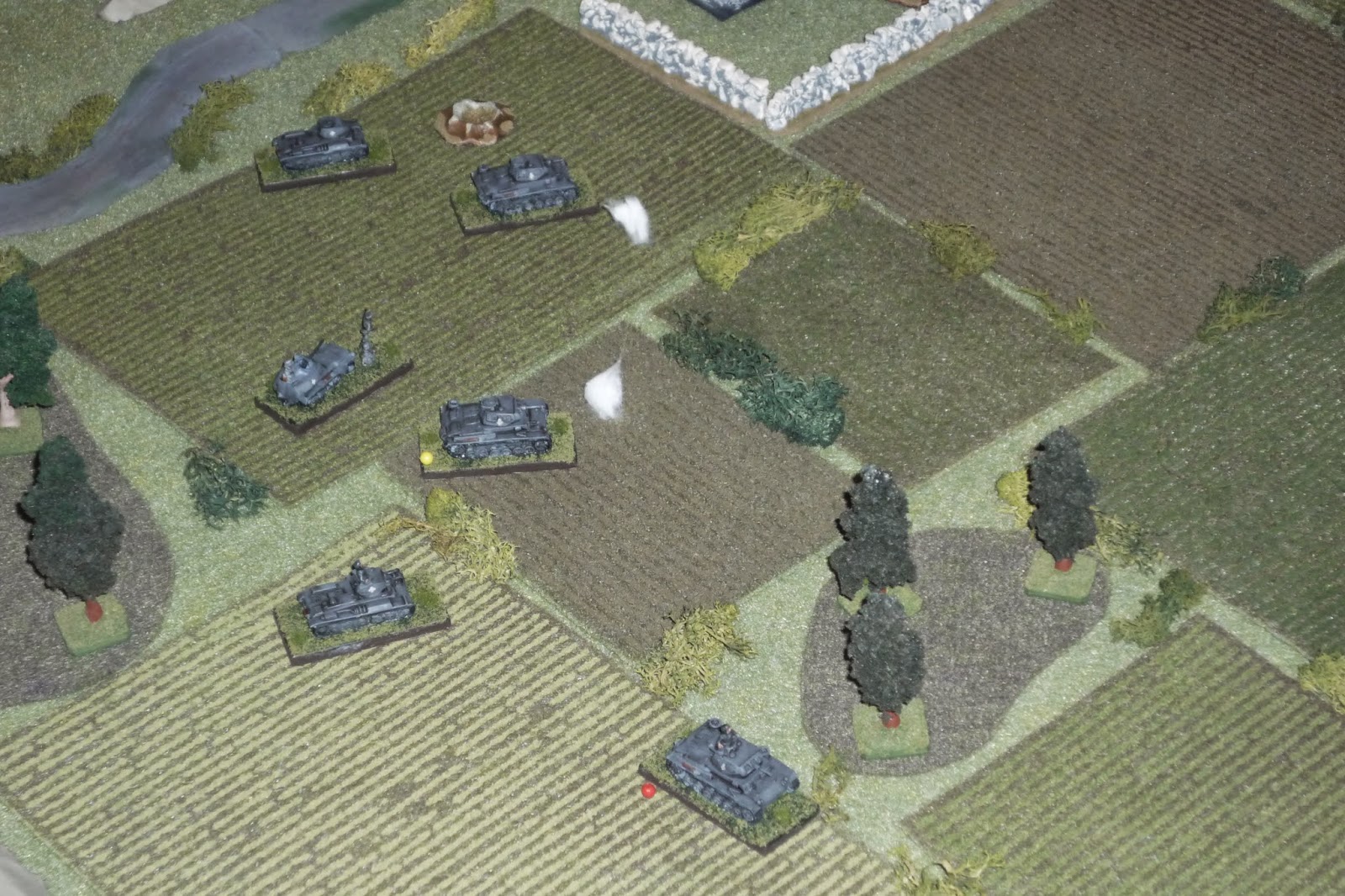 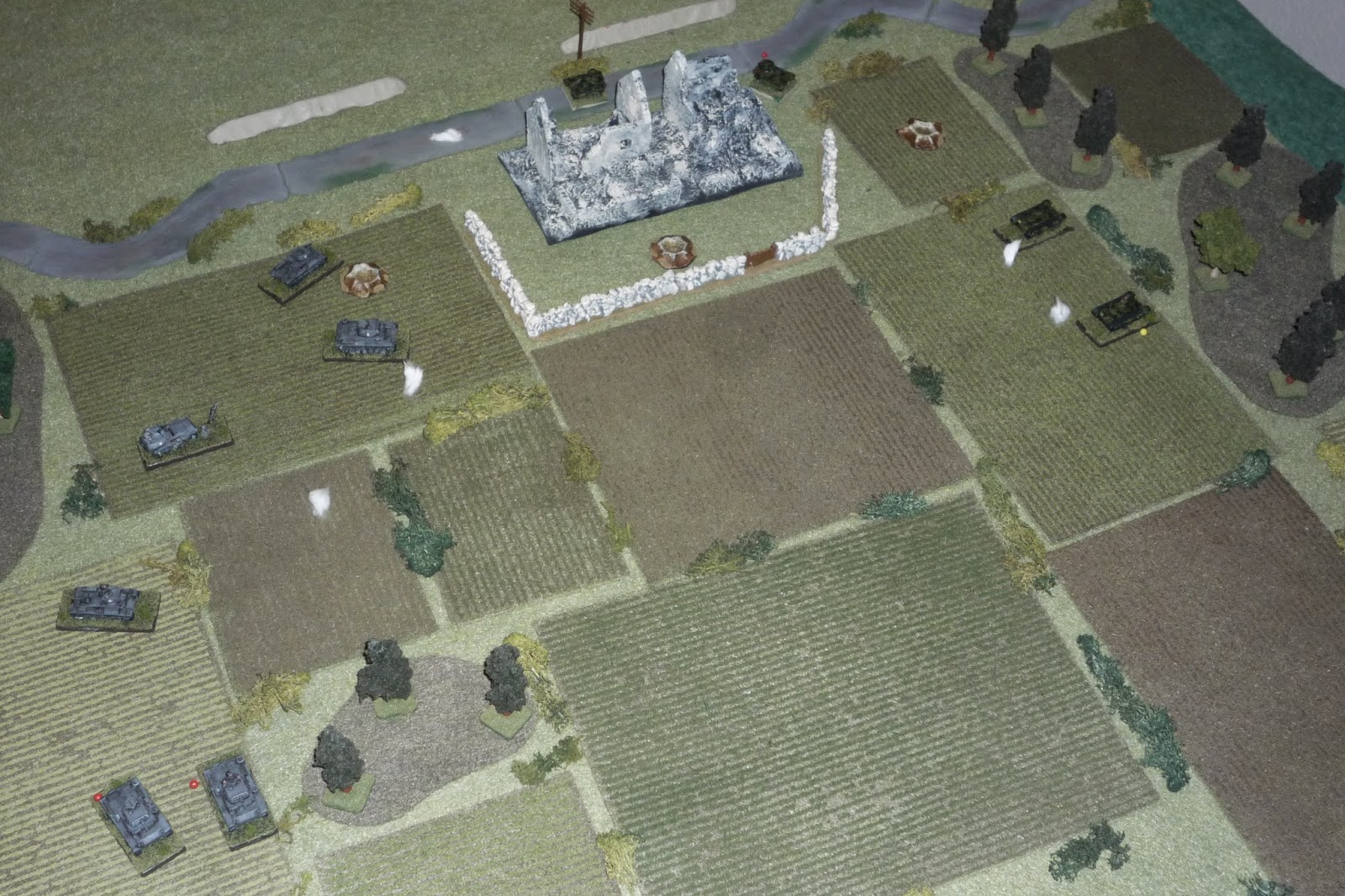 Then the Germans roll up a firefight.  Maj Schultz tries to rally Sgt Grossman's vehicle, but fails and it falls back to Lt Schiffer's vehicle (bottom left).  Cpl Mayer's Pz II fires on one of the Polish tankettes (top) and forces it to fall back, while Sgt Fahrmann's Pz III fires on the infantry tanks (top right), getting a pin, and Cpl Schonan's Pz II does as well, to no effect.  I hold reaction fire until after the Germans have done all their firing. 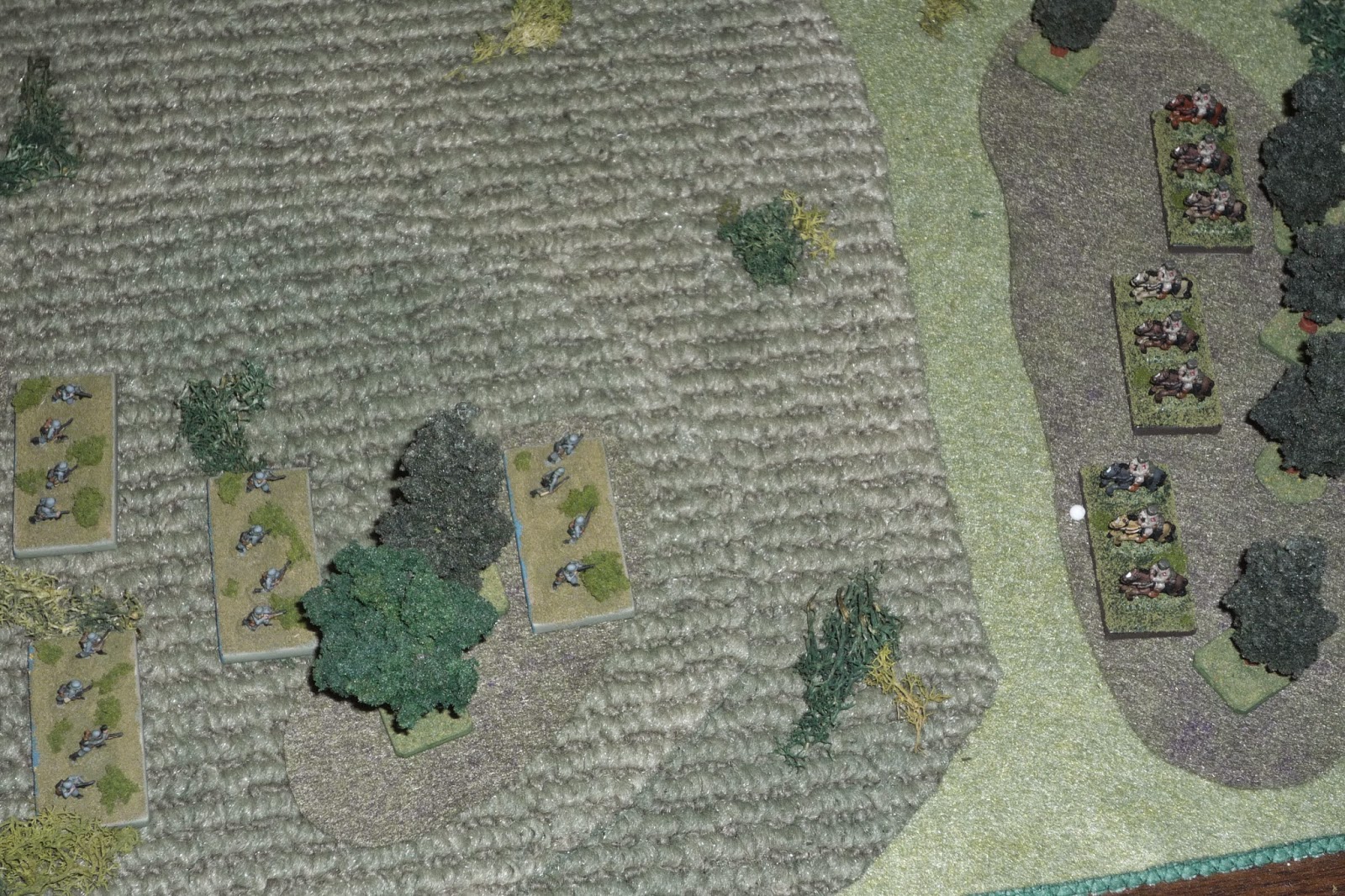 In the south, Cpl Imhofe's squad (center) gets a hit and man down on one of the Polish cav, and they can't react as they're still mounted. 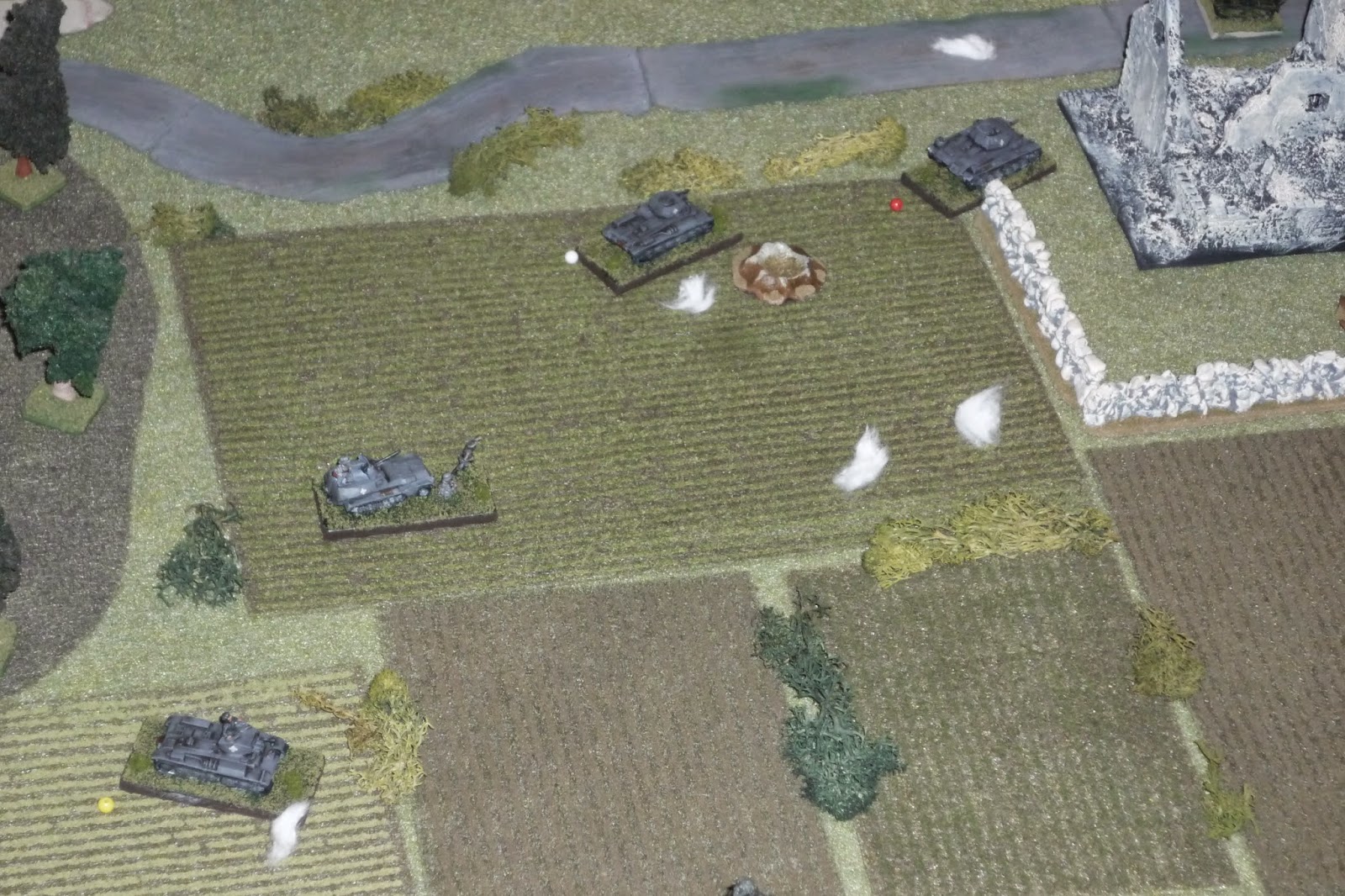 The tankette just visible at the top fires at Cpl Mayer's Pz II (top center), no effect.  The infantry tanks (off camera to right) fire on Cpl Schonan's Pz II (bottom left), pinning him, while the Polish medium tanks (off camera at bottom right) fire on Sgt Farhmann's Pz III (was center where white puffs are), and it rushed forward behind the buildings (red bead).  The the light tanks (also off camera at bottom right) fired on Cpl Mayer's Pz II and immobilized it (white bead at top center), but they stayed in the vehicle.

Then the Germans roll another @#$$ scurry!  All tanks but Sgt Grossman's are able to rally on their own, but then Major Schultz rallies him. 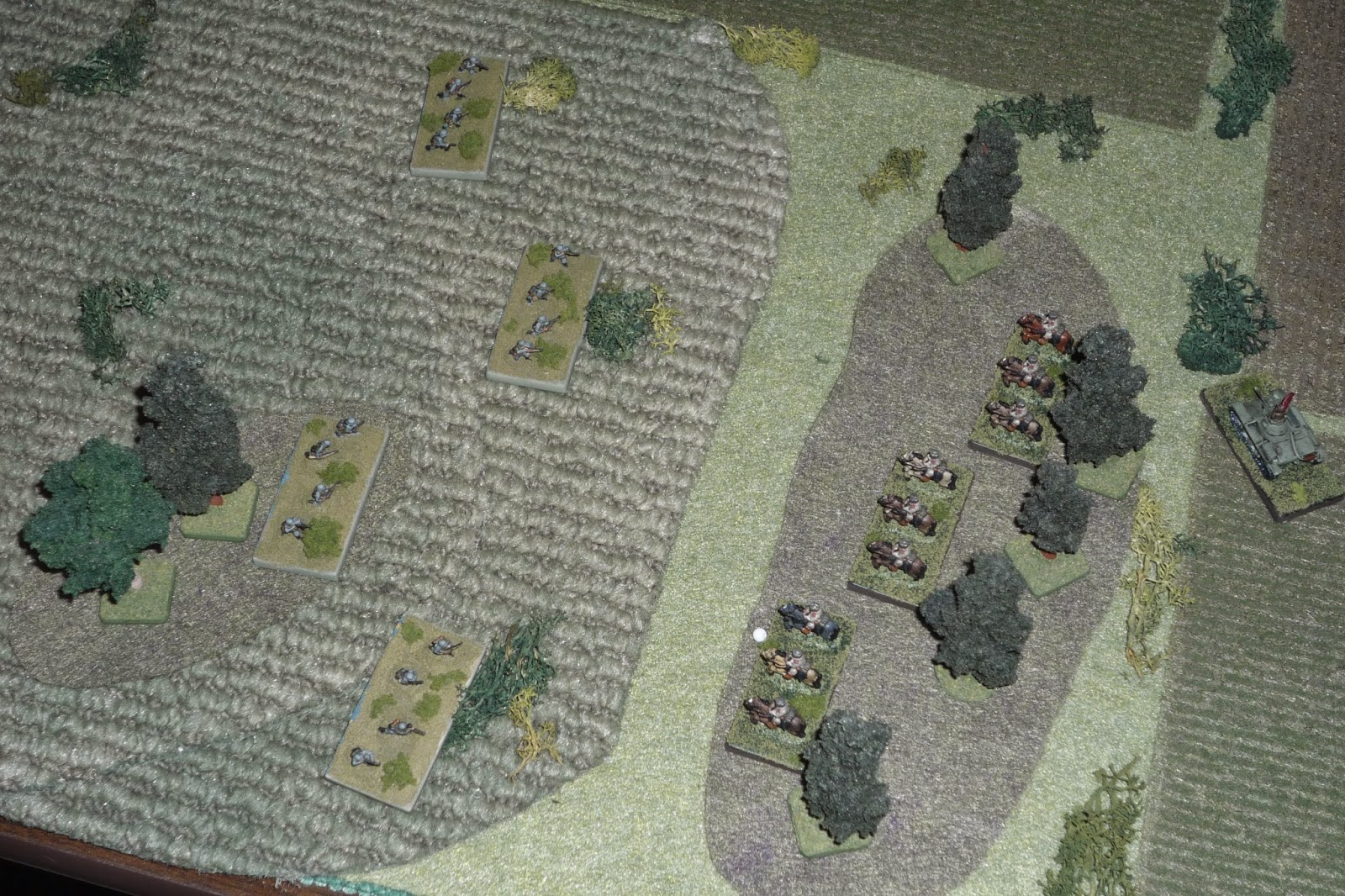 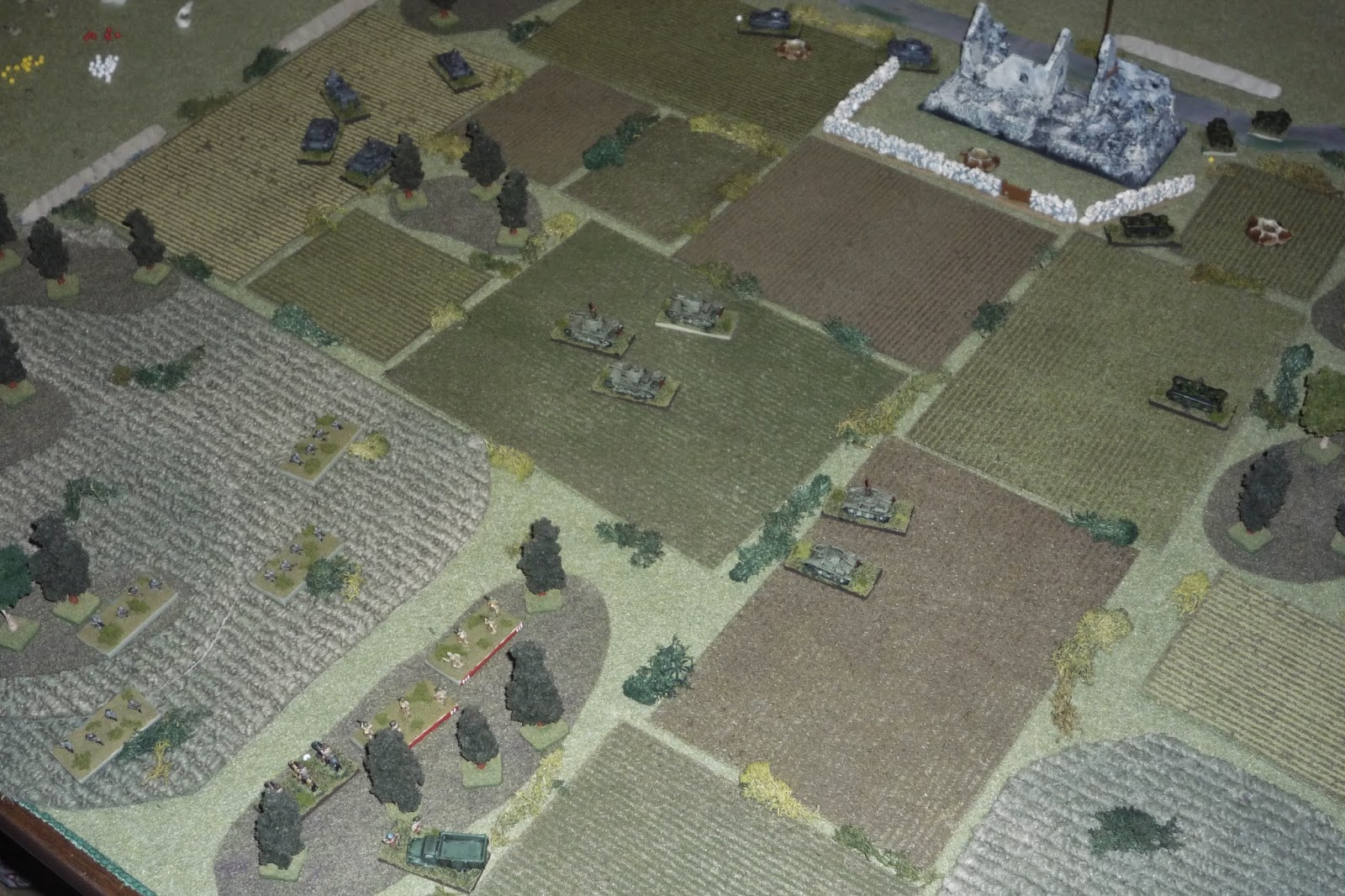 At top right, the tankette can't rally but the infantry tank does, while the other tankette falls back behind the building with its brother and one of the infantry tanks moves forward.  The Polish CO (bottom left) tries to sprint to the roughed up cavalry to help them recover, but doesn't quite make it, while the light tanks move forward then swing left to help with the German infantry and the medium tanks (center, above the two light tanks) stream past on their right, focused on the German tanks and two of the Polish cavalry dismount.  On the Pole's turn, their CO tries to recover the roughed up cav, but they melt away. 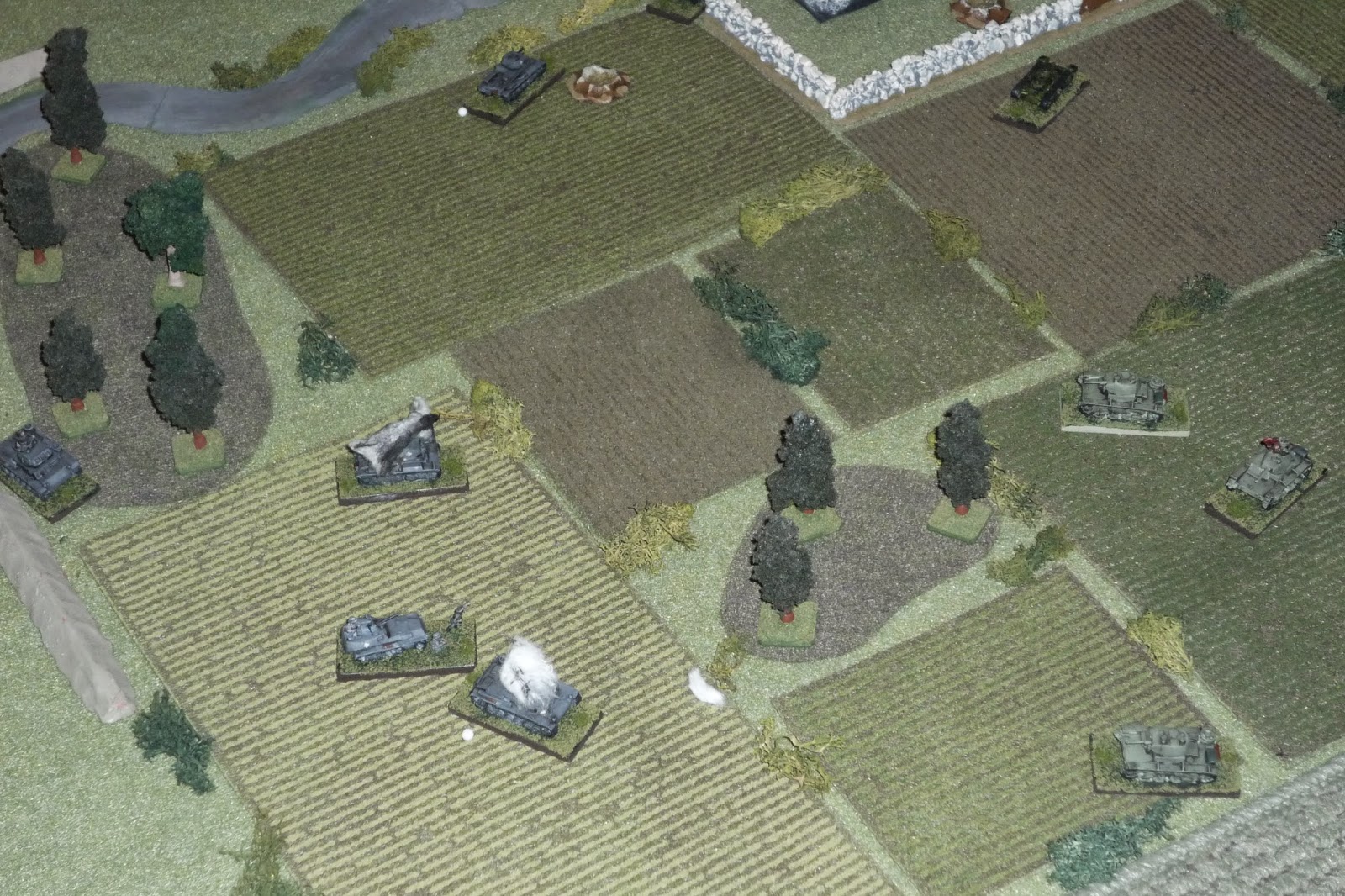 One of the Polish infantry tanks (top right) moves up and fires on Sgt Grossman's Pz III (bottom left w/white bead), immobilizing it and causing the crew to bail.  Then one of the medium tanks (bottom right) moves up and fires on Lt Shiffer's vehicle and forces it back (it was at the white puff next to Grossman's, fell back to far left in trees).  Then another medium tank (center right) moved up and pumped several solid shot rounds into Cpl Schonen's Pz II (center left), putting it out of action. 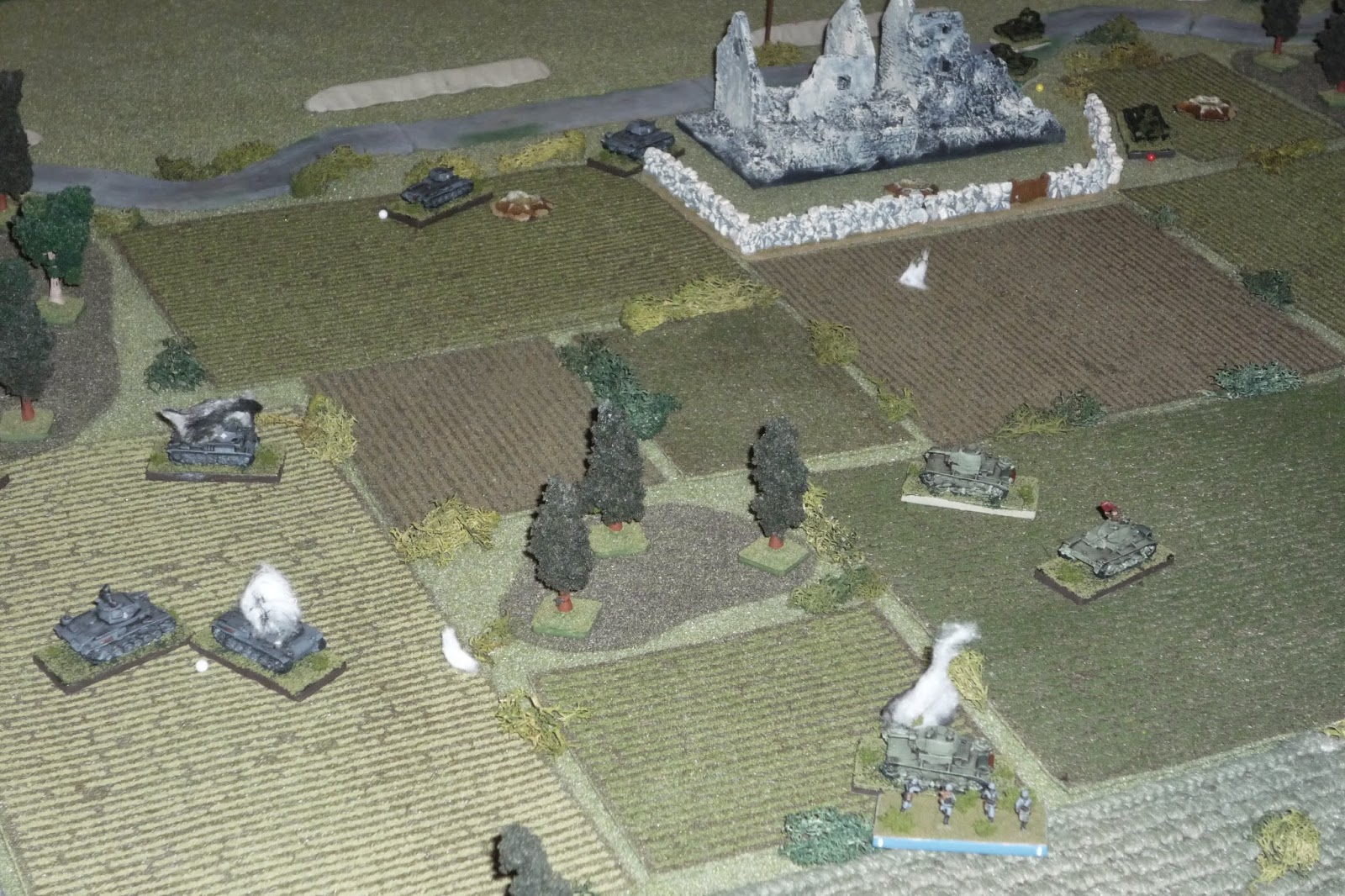 Major Schultz fell back and rallied Lt Schiffer's tank (far left, hiding behind Grossman's immobilized panzer with white bead), which moved up and fired on the Polish infantry tank, forcing it to fall back (it's now at top right, started at top center white puff).

But the big deal was when Sgt Mader's 1st Squad (bottom center) charged one of the enemy medium tanks and overran it, knocking it out! 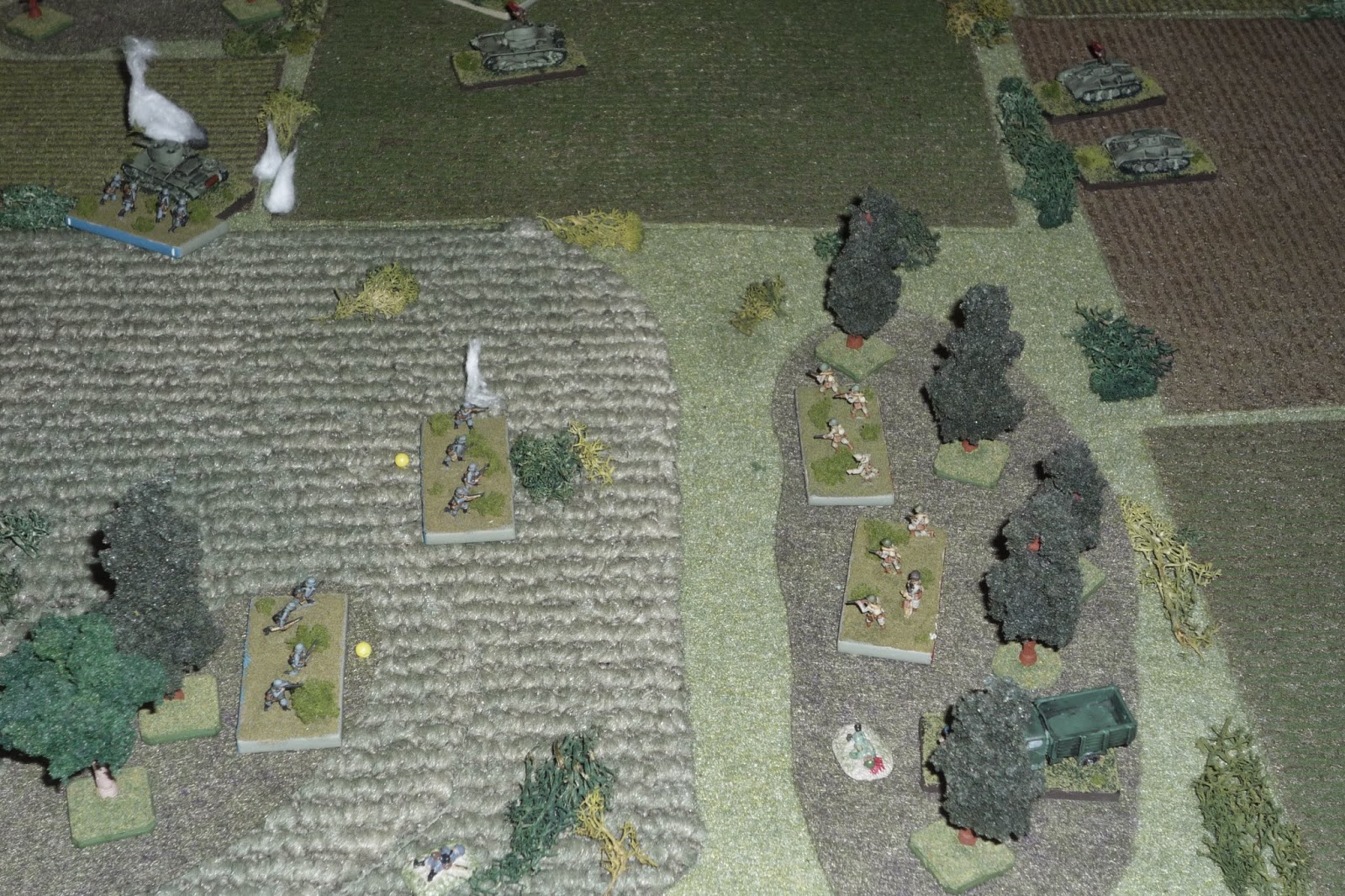 But then the Poles roll a firefight, which really is the right note at the right time.  The Polish light tanks (top right), one of the medium tanks (top center), and the Polish cavalry (center right) fire on the German infantry: Sgt Lehmkuhl and Cpl Imhofe's squads were pinned (center, with yellow beads), and Cpl Kandler's squad was eliminated (bottom center, casualty figure).  However, despite being targeted by two different enemy tanks, Sgt Mader's squad (top left) held strong.  German return fire accomplished nothing... 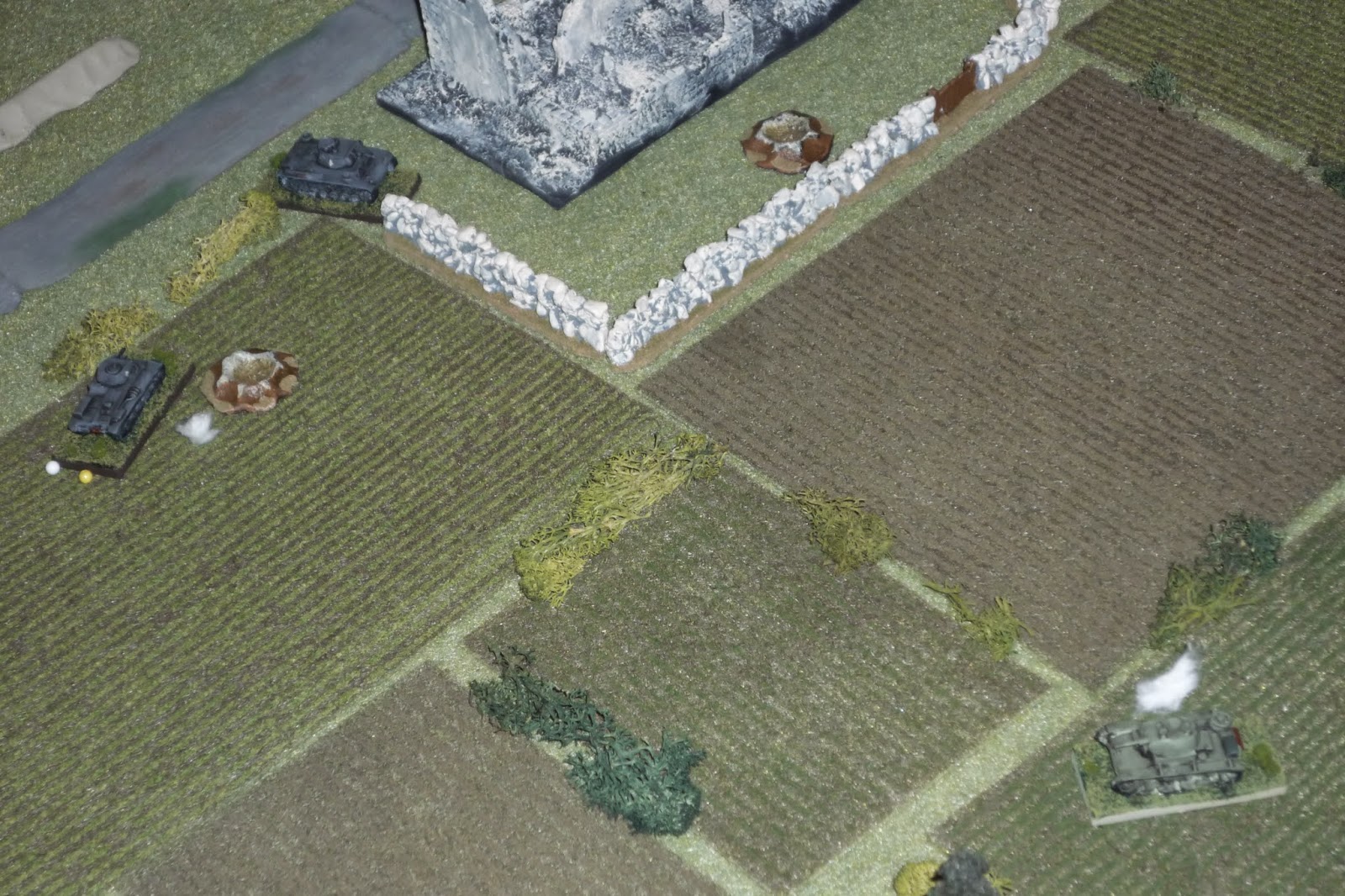 The other medium tank (bottom right) fired on Cpl Mayer's Pz II (far left), pinning it, and return fire, once again, had no effect... 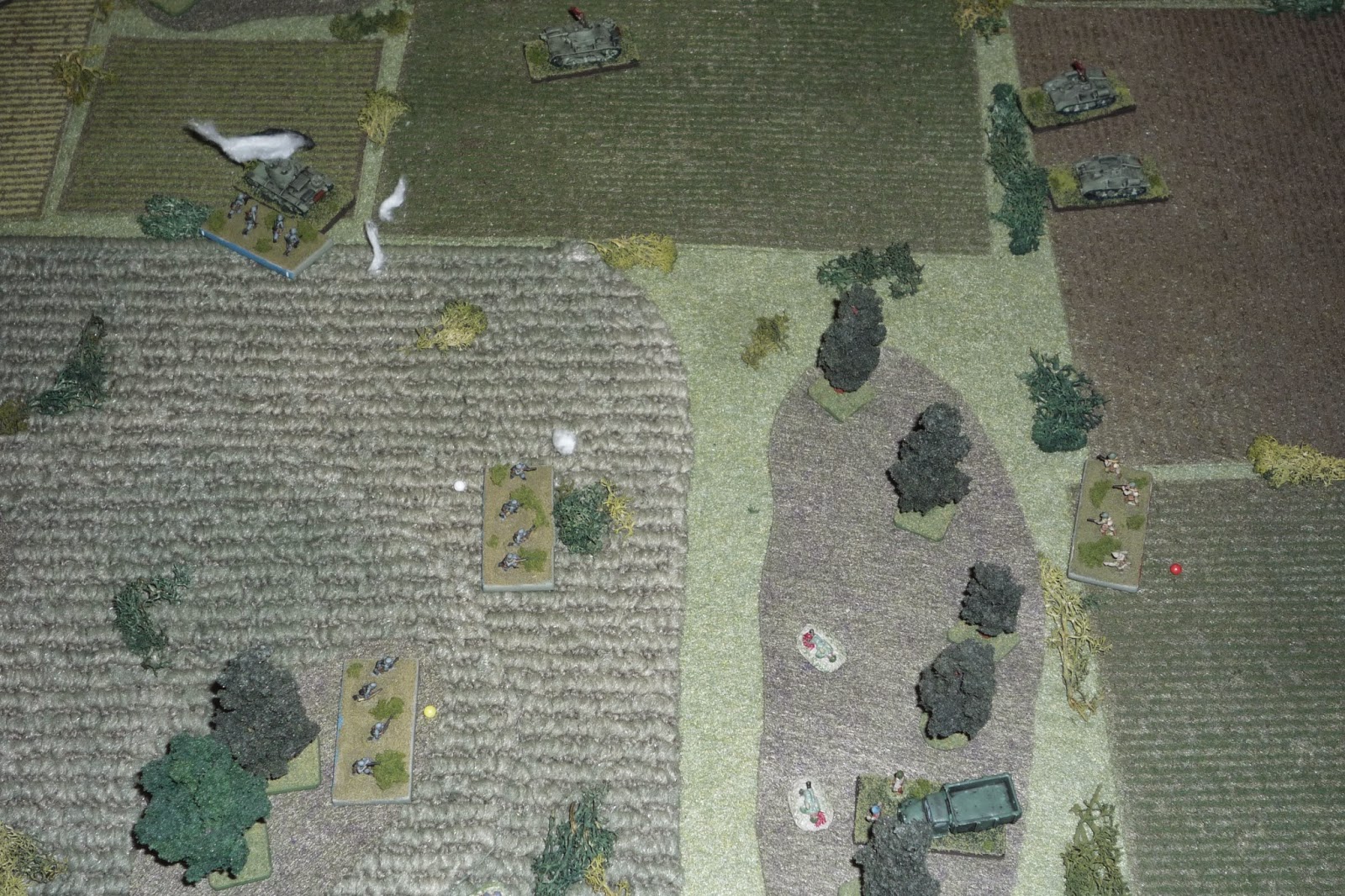 Then the Germans rolled a firefight.  The German infantry killed on cav, and forced the other back, but the T-70s (top right) fired on Sgt Lehmkuhl's squad (center, white bead), getting 'man down.'  The medium tank (top center) fired on Sgt Mader's squad (top left), again to no effect!

The problem is that I really need a 'normal' turn, so I could have Mader's squad charge the medium tank, hopefully win, and maybe gain a little breathing space, but the firefight meant no one could move, thus the infantry couldn't do anything to the enemy tanks... 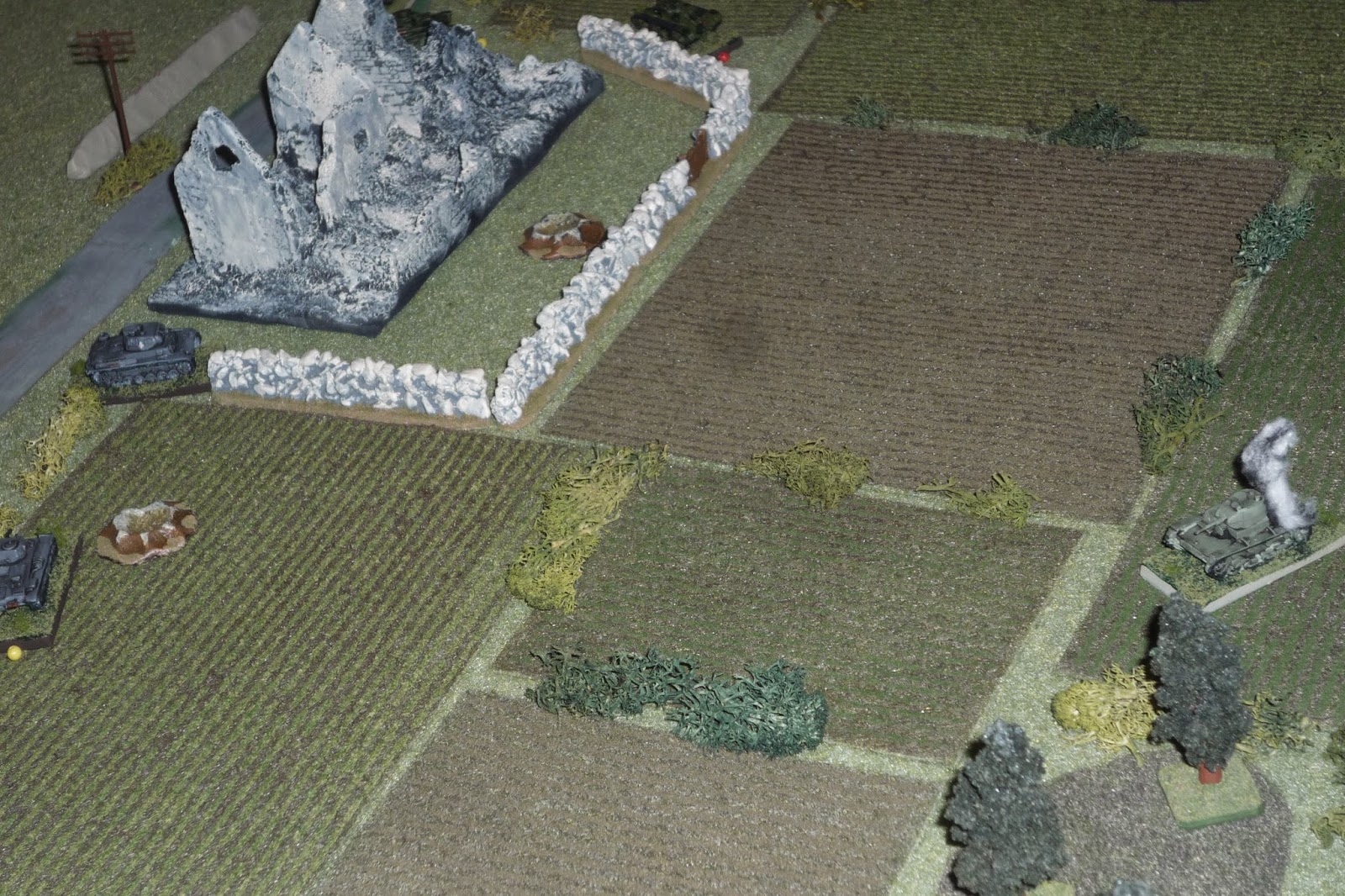 Sgt Fahrmann's Pz III (far left, at wall) fired on a Polish medium tank, and knocked it out!  Finally a German tank gets a kill. 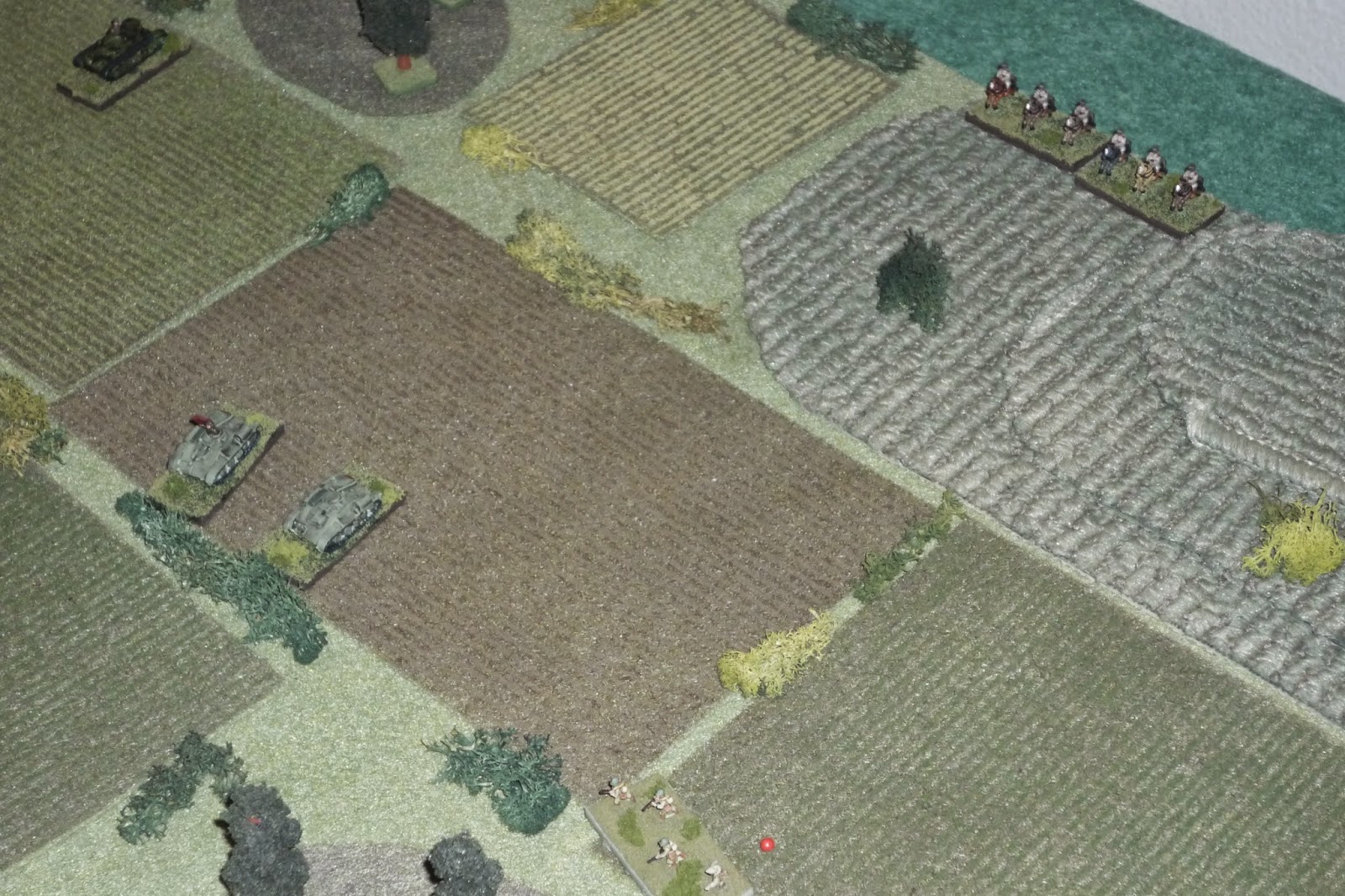 Then the Poles rolled a 'normal' turn, and a random event that saw them receive reinforcements, so two more cav squads of the 12th Uhlans showed up. 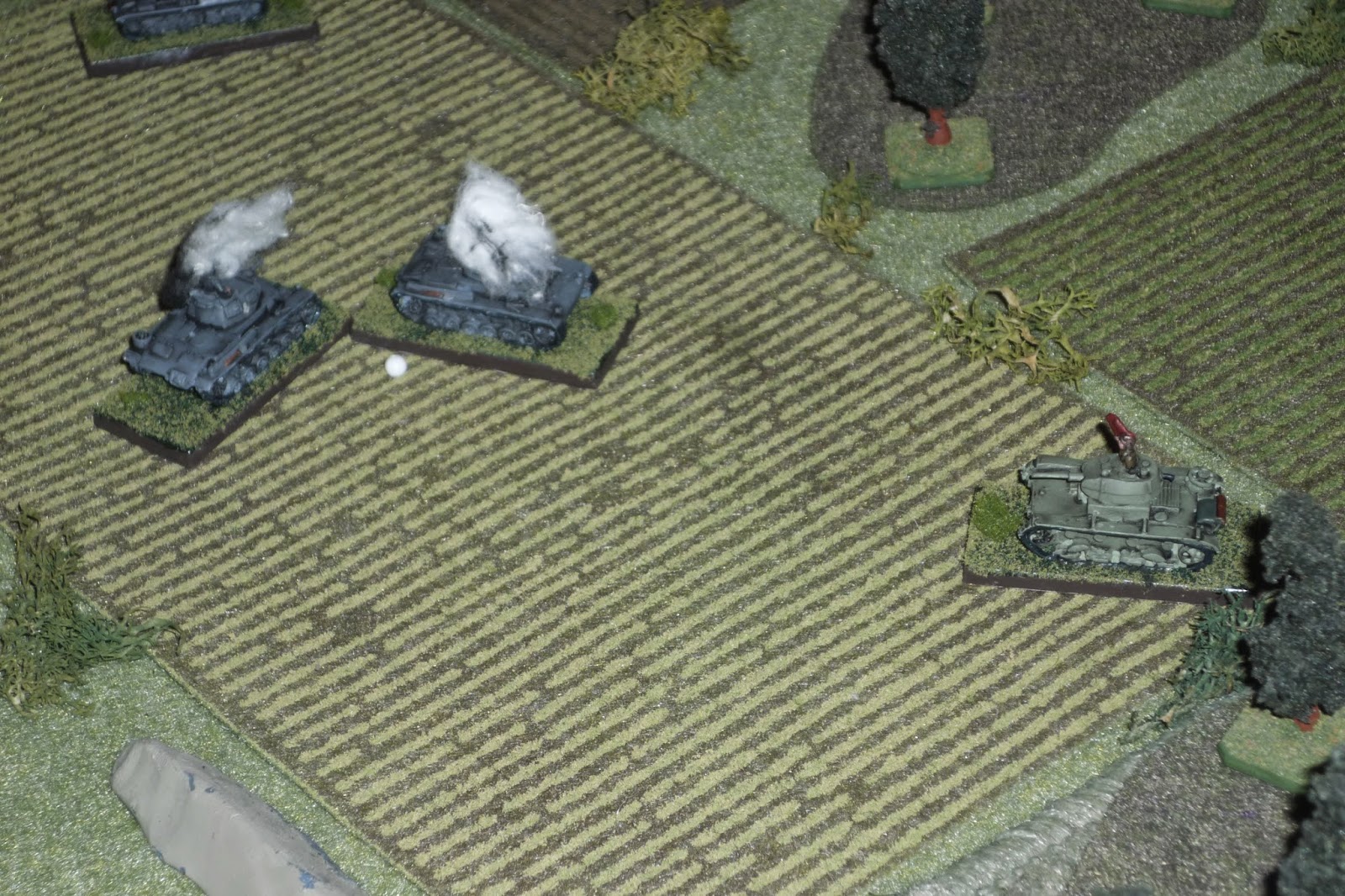 The Polish tankers proved recklessly brave, but it paid off.  Here a medium tank rushed forward and fired on Lt Schiffer's tank, knocking it out... 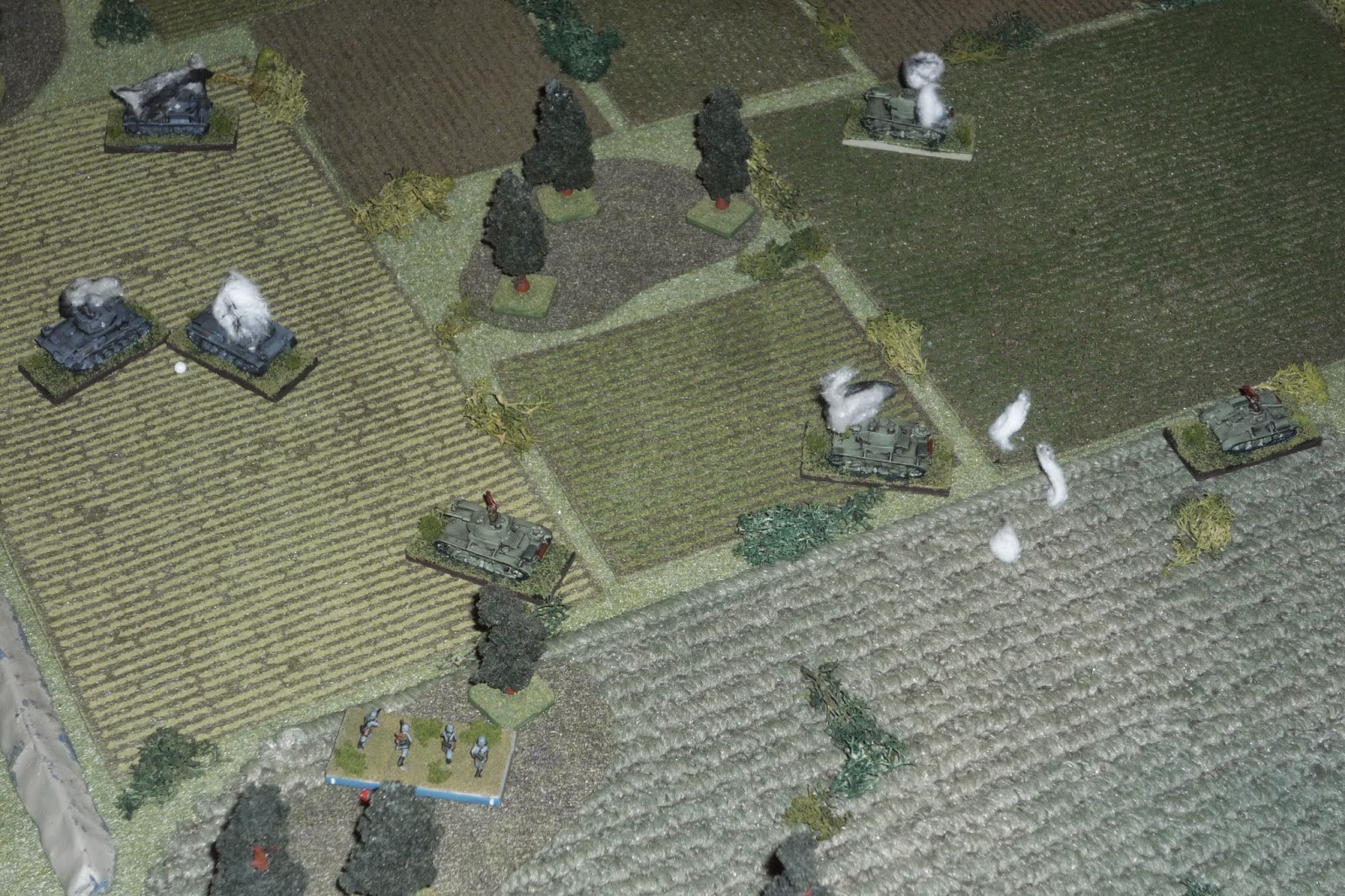 While a Polish light tank rushed at Sgt Mader's squad, firing on them and forcing them back.  They fell back to bottom left, near the Polish medium tank that just knocked out Lt Schiffer's vehicle at top left, but they started at center near the Polish knocked out tank with all the white puffs (representing Polish tank fire at Mader's boys.  Off camera, the Polish CO rallies the last cav squad at the treeline. 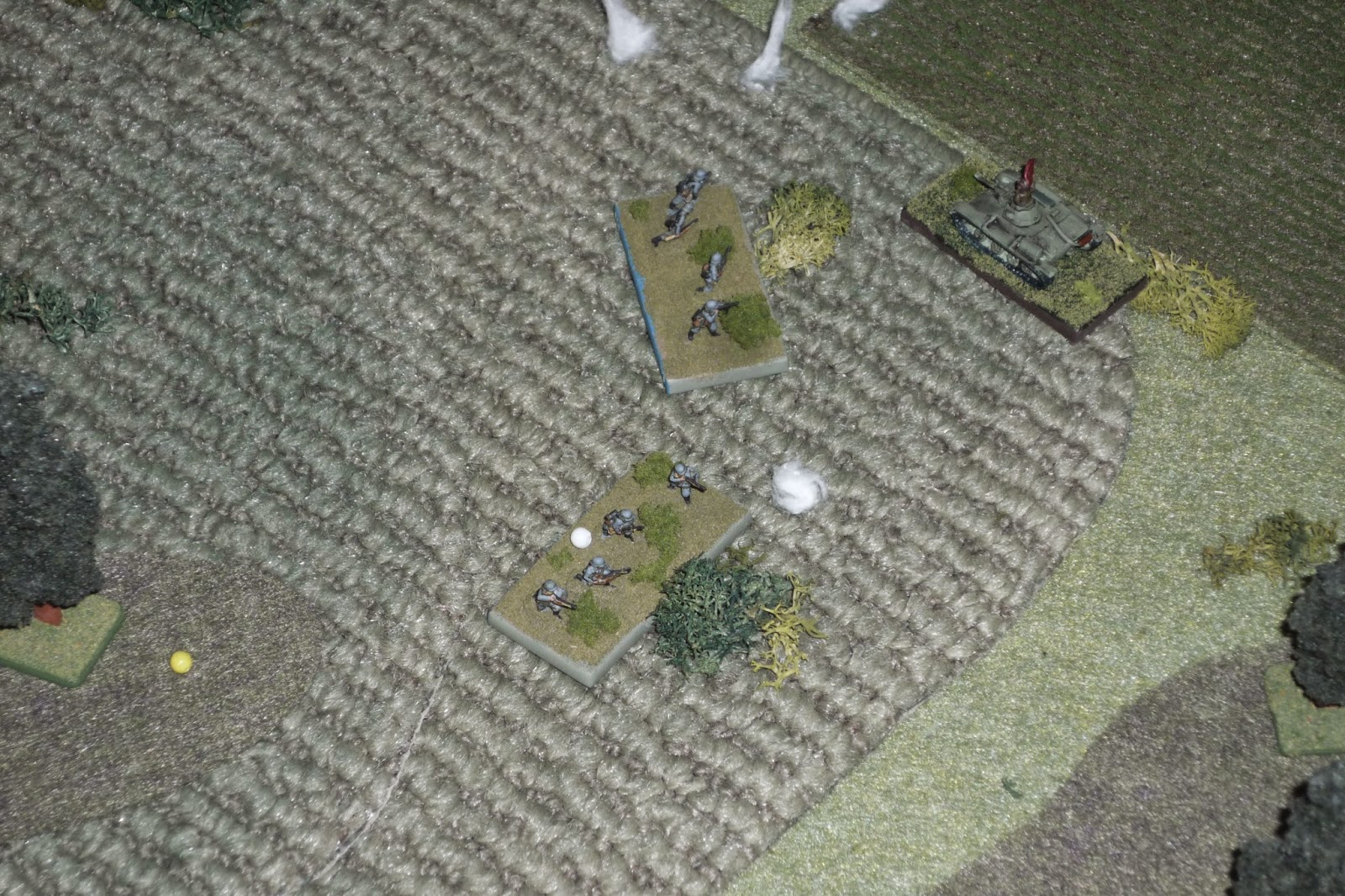 Then the Germans rolled a normal with random event, which allowed one unit to move 6" without drawing reaction fire.  All my infantry were in bad morale states, so I cheated a little bit: I took the best of them (Cpl Imhofe's squad, which was 'only' pinned) and had them test, and they rallied, then moved forward at a Polish light tank (started at bottom left where yellow bead is, moved to top center).  This allowed Sgt Lehmkuhl's squad (white bead) to recover. 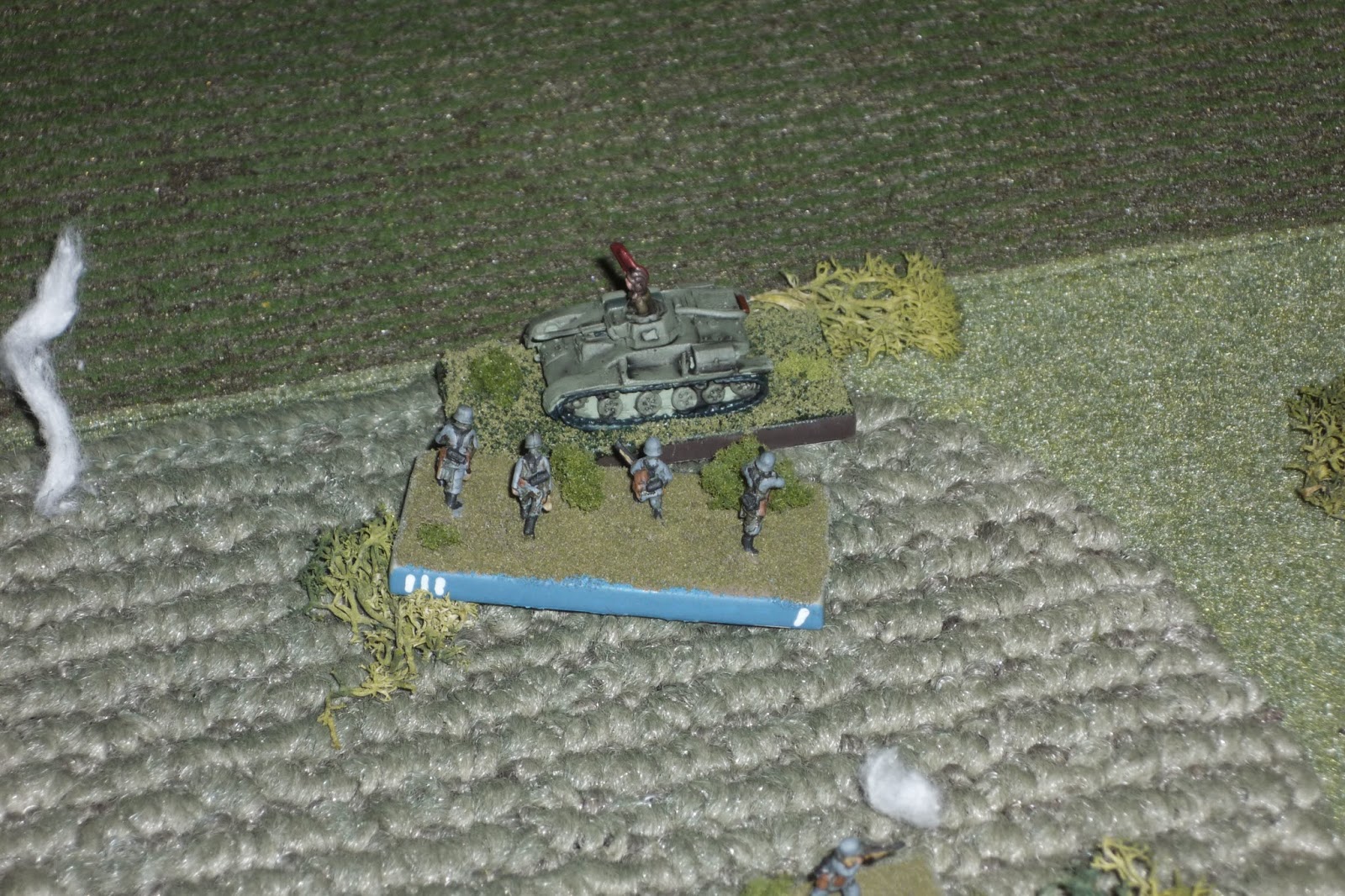 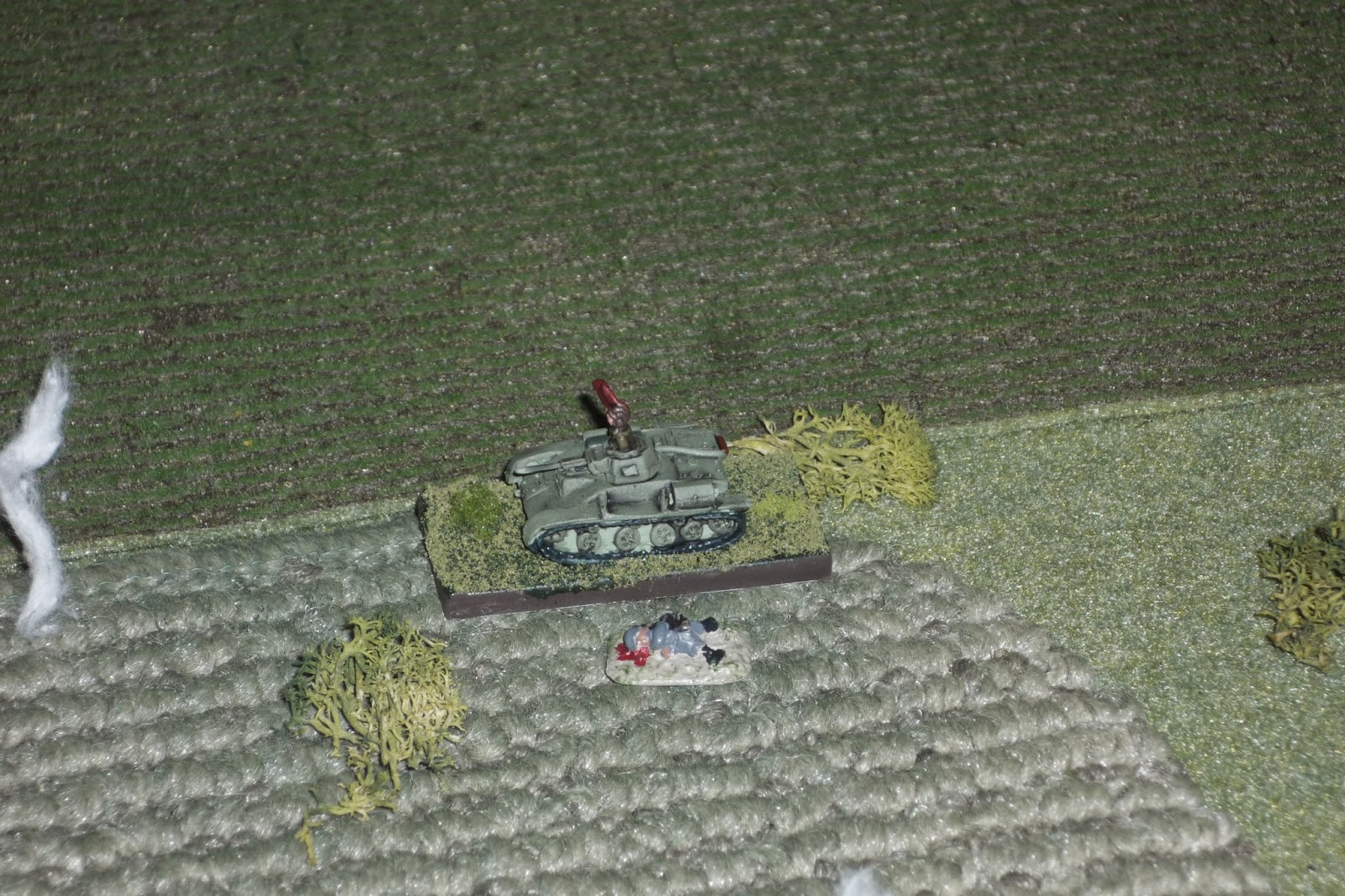 But its machine guns used snap fire to cut them down en route... 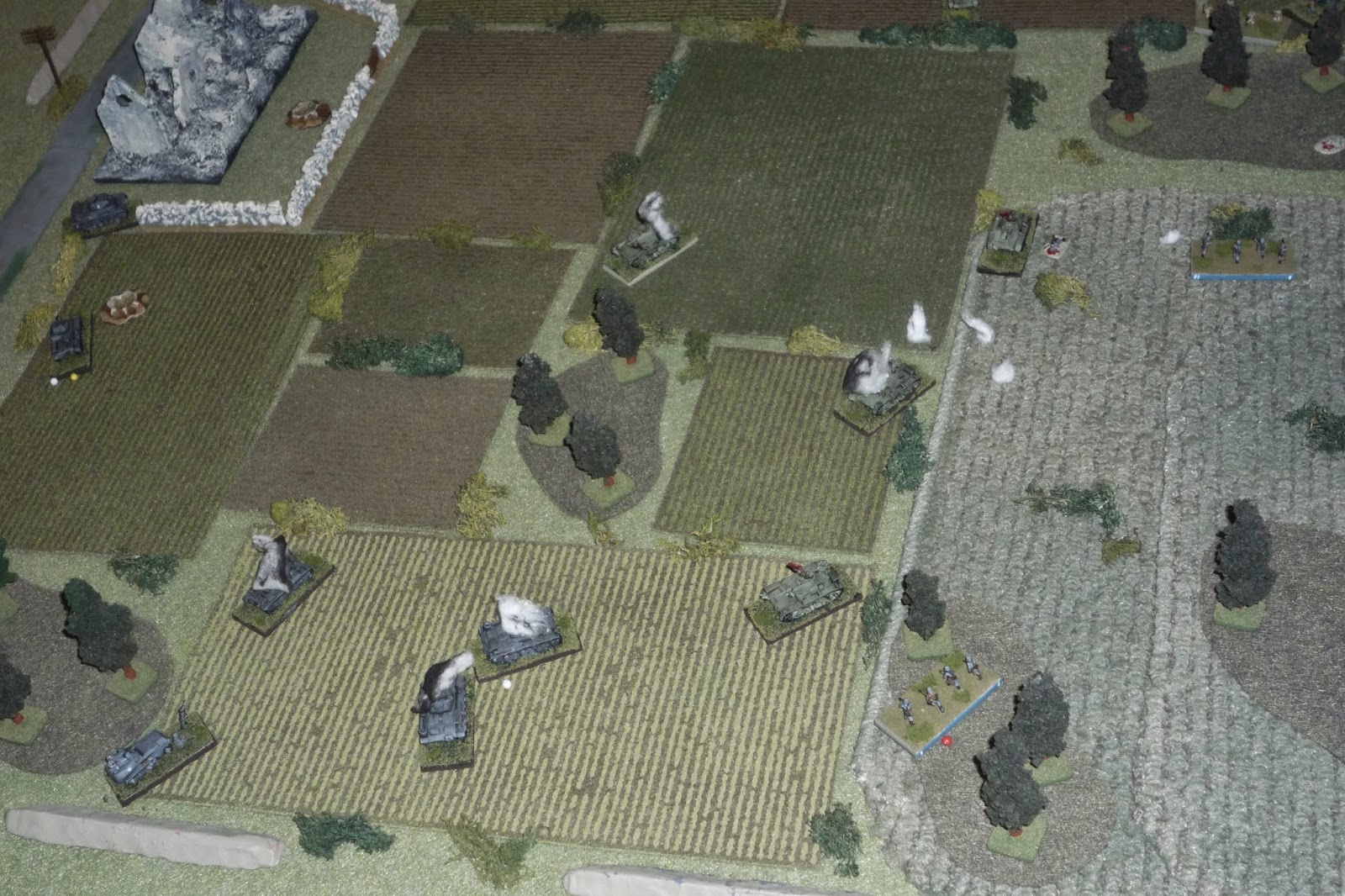 With that, Major Schultz fired the flare signalling his meager forces to fall back...

Another butt-whoopin'.  Hey, I'm getting used to it.  Just couldn't get my tanks going...  Now time for the enemy's infantry counterattack.  Should go okay, I've been doing better with infantry than tanks anyway ;)