Continuing with presenting the stuff I finished this past weekend, after making myself sit down to finish the painting, basing, re-painting, and re-basing that needed to be done.  I had a bunch of Allies to work on, and was lucky enough to get a bunch of them done.  Here we've got Brit 8th Army (100% Pendraken), Brit Early war; despite having some Stens mixed in (mostly Minifigs, but with some Pendraken sprinkled in and a bunch more Pendraken on the way); Brit Airborne 'Red Devils' (100% Pendraken), and some regular old line doggies, AKA US Army Infantry (almost entirely Minfigs). 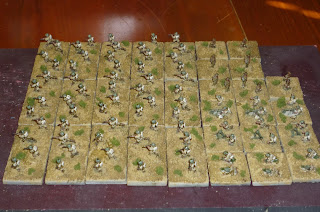 The whole (so far) Brit desert force, with more on the way.  This is pretty much all the infantry, mostly what I have coming is armor, ATGs, and field guns.  There are fifteen rifle bases, three Vickers MGs, three 3" mortars, three PIATs (I'll explain in a minute), and seven leader stands. 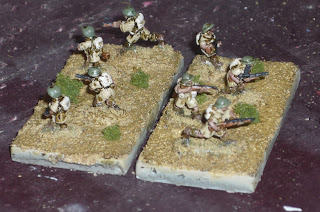 A closeup of a couple rifle stands.  You're probably wondering why my Desert Rats have green helmets.  Well, a few reasons actually: 1) I like the look; 2) it makes it easier to differentiate them from Afrika Korps quickly; and, most importantly, 3) these will see action in North Africa, in Sicily, in Italy, and in the Pacific, from Malaya and Singapore to Burma and India.  So, I need the PIATs for Italy and CIB.

The wash was a little harsh I think... 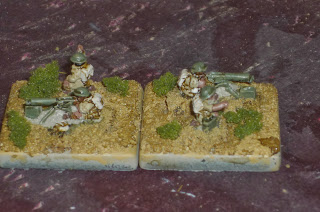 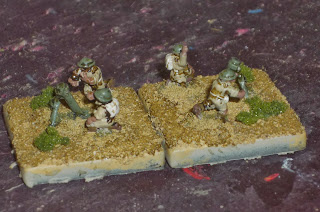 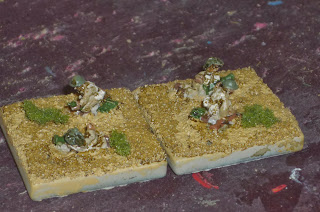 PIATs.  Good grief; literally as I'm typing this I realize I have the two inch mortars sitting in a box, waiting to be painted... 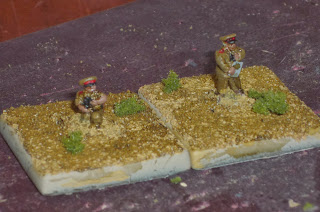 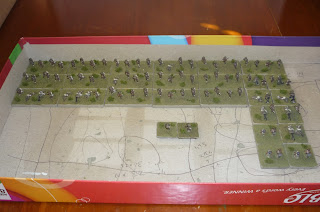 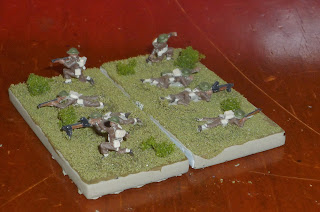 Closeup of a couple rifle stands.  Detail is a bit 'soft' on some stuff; I'm not particularly fond of the these Bren guns; their barrels were another 3mm long, so I snipped them, and here they are.  You'll see these again later. 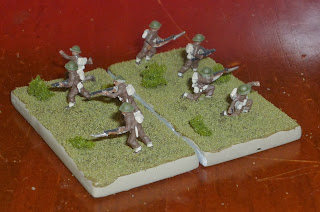 Another couple Rifle stands.  I'm a little aggravated that I've got a few Sten Guns mixed into my 'early war' force, but I'll get over it. 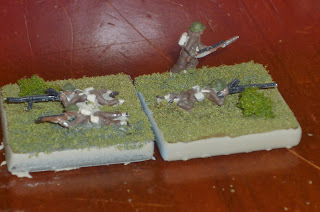 Here are some more of those Bren guns; this time I only cut off a little bit of the barrel, and now I'm using these as AT rifles.  Close enough for me (it's 10mm). 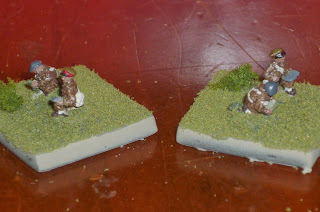 A couple 2" mortars, with officers, both from Pendraken.  Another tribute to my laziness.  I had airborne 2"mortars from the Brit airborne range, but they're wearing berets.  So I'm pretending the BEF had a few guys in gray (grey for your Brits) berets.  I now have 2" mortarmen in pie-plates, but they're not painted or based, and these are ;) 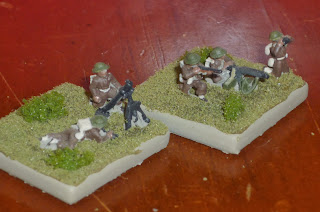 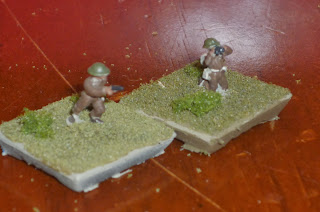 The two officers I currently have. 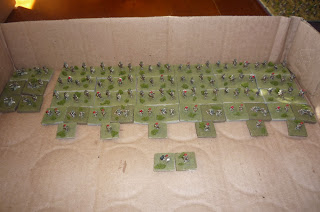 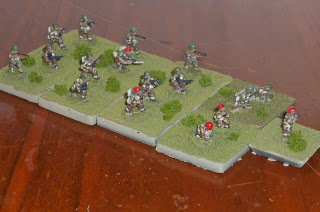 A Red Devil platoon, consisting of three rifle teams, a 2" mortar team, a PIAT team, and a leader.  I've actually had these for a good few years, and have rebased them two or three times now.  I bought these before Pendraken produced their commandos (in berets), so I took some regular Brit riflemen and whacked their helmets down with an X-acto knife to create berets on some of the rifles.

One more tribute to my laziness; once I was finished flocking these I realized I had six PIAT teams, each with two helmeted men, and six 2" mortar teams, each with two men wearing berets.  Then I noticed, you really could swap out the PIAT loader with the kneeling officer I put on each 2" mortar base, and they wouldn't look out of place.  Then I thought, wouldn't it be cool if you had mixed some of those up so they weren't all the same?  Well yes, it would have been... 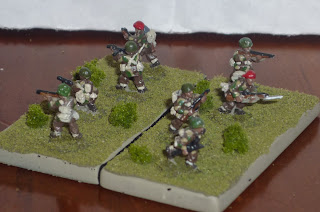 Closeup of a couple of the rifle teams, showing my home-made berets. 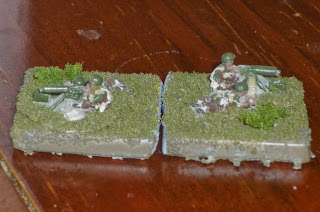 Couple Vickers.  I hate how the khaki basecoat shows up in these photos; I swear it's not noticeable in 'real' life. 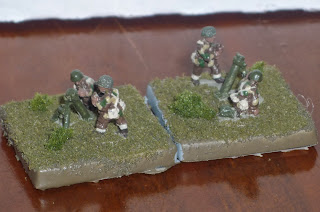 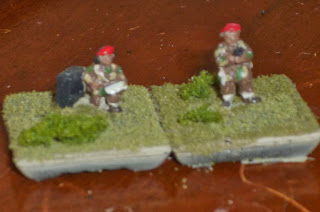 Couple leaders, with the left-hand guy being an airborne radioman, of course.  At one time I had the whole pack of radiomen dressed as Red Devils, but as other projects, such as my French for Dien Bien Phu, needed radiomen with berets, they were all appropriated for other tasks, and this is the sole remaining Red Devil radioman.  I will use him as the XO, or Wpns Plt commander, or an FO, as needed by the scenario.  Hell, I may even use him as a radioman! 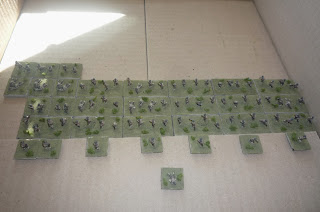 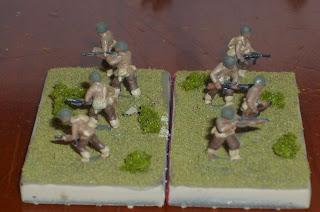 Closeup of a couple rifle teams.  I tried a lot of different paint schemes and wasn't really happy.  I ended up going with this paint scheme, and still wasn't happy until I 'overdid' the leggings.  What I mean is, they look good (to me at least), but if you look closely you'll see I painted the leggings almost all the way to their knees in order to get the look I was searching for. 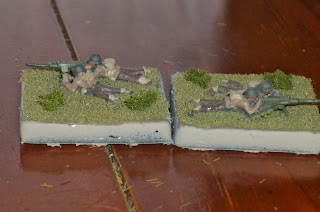 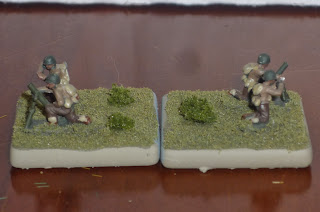 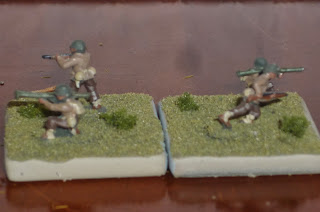 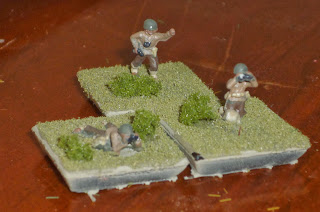 Three of the officers.  You can barely make it out, but there's just a touch of white paint on the front of the guy in the back's helmet, trying to show his officer-ness for all the snipers out there ;) 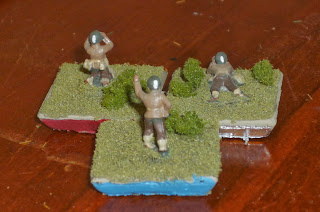 The same officers, from the rear, showing their officer ID stripes.  I always thought they were cool and can't help but paint them (and NCO horizontal stripes) on everything.