(either bear with me through the extraordinarily long rambling, or skip down, but take a look, there's a boatload of pics further down)

This weekend I should have been gaming, but instead I was stricken by the scourge that sinks its tentacles into so many of us wargamers: rebasing figures.  I spent roughly 13 hours this weekend pulling little men off there bases, arranging them into new units, and gluing them onto new bases.  This I finished for both armies.  However, I also needed to flock each army, but this weekend I only finished one army, the French, and the pics below are the results of my efforts.

I must say, somewhat sheepishly, that I DID NOT paint these figures.  I purchased them from a gentlemen known as "Gunner," who sells the system "La Petite Armee" in roughly 10mm.  I say roughly because the figures are made of plastic and come not from a traditional wargames miniatures manufacturer, but from a special edition of the boardgame "Risk."  I'm sure the more discerning, formal wargamers amongst you may be snickering right about now, but this was a God-send for me.

I knew absolutely nothing of Napoleonic warfare outside of having seen the movie "Waterloo" (don't know much more now, I suppose).  But I knew enough to know I wanted to partake of Napoleonic warfare (these days it seems the era/class/genre of warfare I won't game is getting smaller and smaller).  But where to start?

Well, this is where Gunner came to my rescue; after much discussion with him, I ended up buying two complete sets of his LPA system, plus various extra armies, special units, officers, and artillery.  Really a great guy with a great concept that allowed me to hop right in and get down to the business of Napoleonic gaming.

I really can't say enough about Gunner and his system.  I had all sorts of "what is that, what does that do, why would anyone do that?" and Gunner patiently walked me through it.  His website is:
http://www.zianet.com/signifer/lpa.html

I highly encourage you to visit, if just to take a look around.  And if you're like me and had a couple periods you were gaming, then got bit by the Napoleonic bug, this is a great way to start

The LPA system comes with its own set of rules, for which the forces are based.  Before his passing, my father and I played quite a few games using the LPA rules; they are clear, concise, well illustrated with examples, but just not our style (sorry Gunner!).  We then moved through a series of varying rules, mostly home-made (yes, I was new to the era, and already making my own rules, such is my conceit!), but nothing stuck.  Tried some IGO-UGO style, some Blitzkrieg Commander style (I'm referring to the activation mechanism), some DBA style, some and probably a few others that I've forgotten, but nothing really stuck and the toys went on the shelf.

But I didn't lose my desire to game Napoleonics, and so I ended up buying several sets I was impressed with (LaSalle, Napoleon at War, Songs of Drums and Shakos Large Battles, Picquet), but none of them really 'struck' me.  Then I bought Black Powder and thought, wow! this could be it.  Then I started a blog and really delved into solo-gaming, and just didn't make time for it.  Compounding this problem is the fact (you'll think this is hilarious) that, for a little bit, I actually got...  I dunno, what's the right word/phrase for it?  Self-conscious?  I really felt strange using figures someone else had painted, they didn't feel like they were 'mine.'  So, I went out and bought some more Napoleonics.  To add insult to injury, instead of sticking with my tried and true 10mm, I went and spend a bunch of money on 6mm.

I started painting and basing, then I'd get another set of rules and change the basing (and adjust how much more I needed to buy), on and on and on, until I figured out something.  Man, these things are a bastard to paint!  I'm proud of my work, but I don't know if I'll ever finish painting and basing them.  And, though I've already sunk in what, to me, is a considerable amount of money, to do them the way I want to, I need to quadruple the amount of my hard-earned income that needs to go to a certain figure manufacturer in order to complete the project.

So, as I was going upstairs to fight my various battles, invariably I'd end up looking in the closet at all the LPA forces I had just sitting there.  And you know what I figured out?  Using all those forces would probably be a great idea.  Know what else?  After painting hundreds of infantry, artillery, cavalry, and leaders myself, I'm over any negative vibes I had about using figures painted by someone else.

Let's get down to business, so I can get to some solo-gaming with Black Powder. 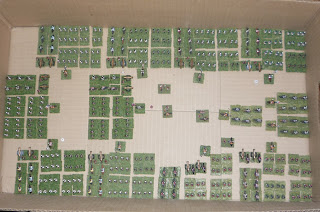 This is the entire French force, consisting of French (of course) and Bavarian, Polish, Saxon, and Italian allied contingents. 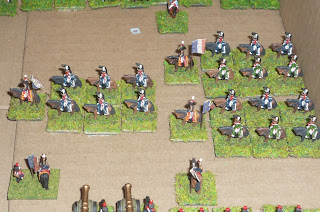 Forgive the chaff at top and bottom, but center is the French Reserve Cavalry Division.  Each set of three cavalry will serve as a "unit" in Black Powder, which, for the way I'm organizing my force, I suppose will equate to a cavalry regiment.  At left you have a brigade of two regiments of Cuirassiers, while top right and bottom right each are a brigade of one regiment of Cuirassiers and one regiment of Dragoons.  Each brigade in the Reserve Cavalry Division has a command figure. 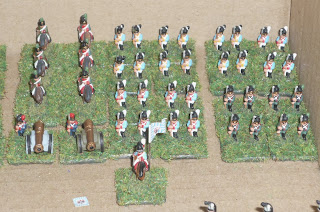 The Bavarian Division, with four infantry "units" (to be honest regarding echelon, I'm not sure if they should be regiments or battalions.  I suppose regiments as, if I went battalions, the cavalry units should be squadrons, right?), two units of cavalry (1 x Bavarian Cheveau Leger and 1 x French Chasseurs), one battery of foot artillery (one Bavarian, one French), and its commander. 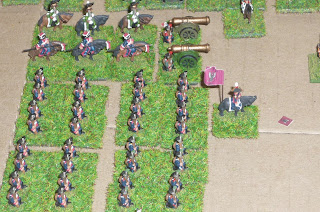 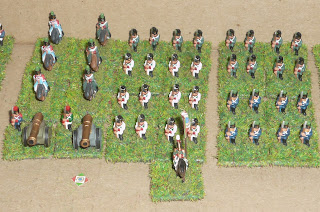 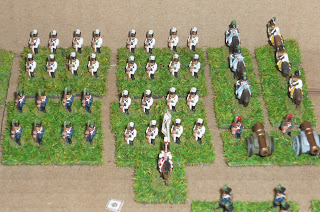 There are four French infantry divisions as well, each with four infantry units, two cavalry units, one foot arty battery, and a commander.  They are each 'brigaded' into a Corps with a foreign division, and these are formed into two Wings, each with a Wing Commander.  There are some foreign elements (usually cavalry) mixed into the French divisions.

Then we get to the Guard, which is a Corps of its own, broken down into two divisions. 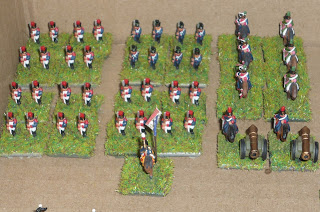 This is actually the 2nd Division, consisting of four infantry units (three of "Middle Guard" with red plumes, and one of "Young Guard" with black plumes), two units of cavalry (1 x Chasseurs, 1 x Polish Lancers), one horse artillery battery of two guns, and its commander. 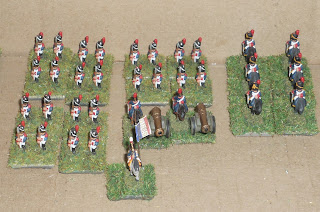 And the 1st Division, consisting of three infantry units (all comprised of "Old Guard"), two cavalry units (both "Grenadiers a Cheval"), one horse arty battery of two guns, and its commander.  The Guard has a Corps Commander as well. 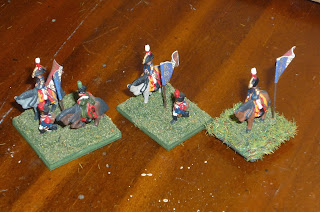 At left is the French Army commander (Napoleon), center is a Wing (or Guard Corp) Commander, and at right is a Division Commander. 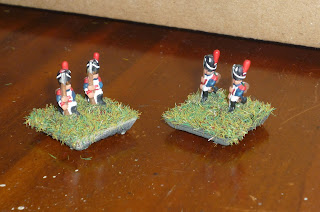 Close up of the Old Guard. 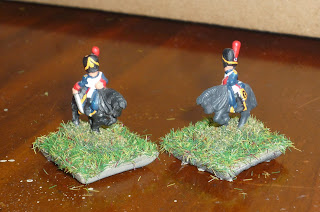 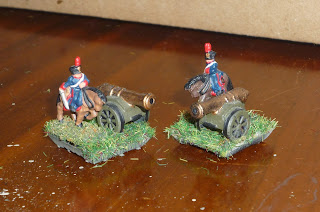 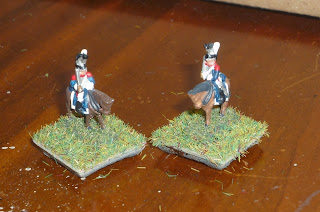 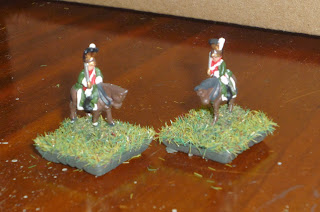 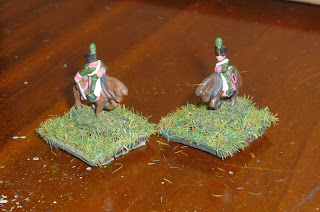 Chasseurs (I have another set of Chasseurs with dark red facings as well). 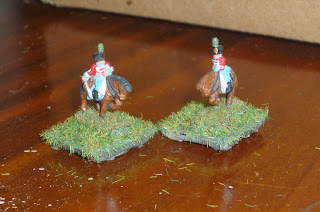 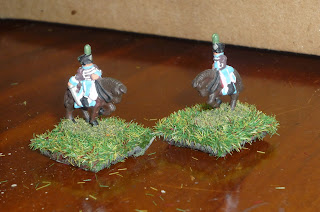 The other set of Hussars. 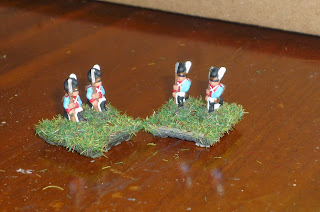 Bavarians.  I love the helmets. 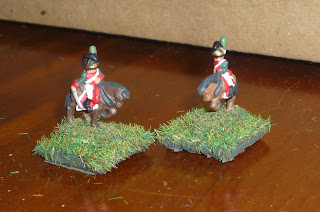 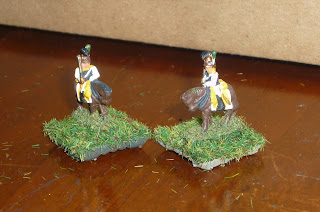 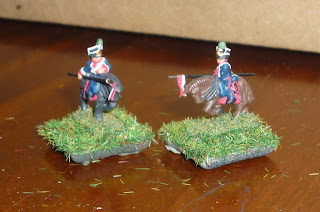 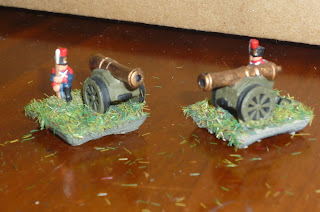 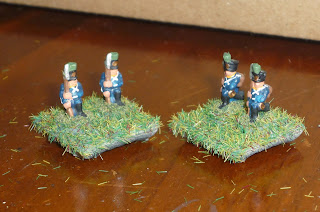 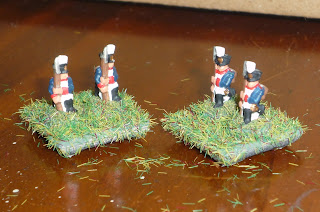 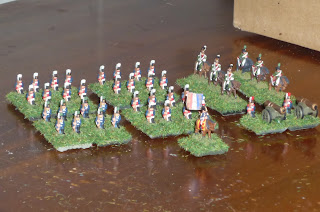 A look at a Division, in this case, one of the French divisions.  Once again, for the most part the formula for the basic fighting block will be four infantry units, two cavalry units, one battery of artillery, and one commander.  Some are probably laughing about having units of only eight men (for infantry) and three troopers (for cavalry), and more still because the way I have them based.  But it works for me.  If someone wants to buy some figures from Gunner and donate them (Christmas is almost here), I will gladly add more figs to the units.  The basing helps me do what I want to do, which is showing their formation in an easily manipulated and easily identified manner. 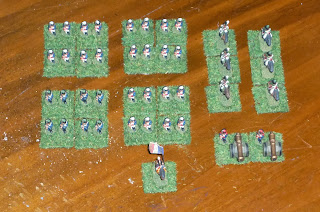 Another look.  So, with Black Powder I intend to use the Division commanders as the Brigade commanders the rules call for.  I want to fight 'large' battles, both in size and echelon, which is why I'm calling units regiments instead of battalions, and why I have Wing Commanders between my Division commanders and the Army commander (the rules only call for a C-in-C, in addition to the Brigade commanders).  So I'll have to figure out exactly how to use my Wing commanders, but I'm thinking it's pretty simple: they can give orders to any unit/group of units (using group orders) in their Wing that has not already been given orders.

Well, I'm stoked to get it on with these fellas (kinda came out wrong, didn't it?), but the truth is I still have a lot of work to do in the form of flocking the enemies of France.  If you're getting a kick out of my French forces and how this or that would never happen (regarding how I've organized the forces), wait til you see the coalition forces!  I've got Brits (a lot of Brits), Austrians, Prussians, Russians, and even a few Dutch, and while their divisions are pretty homogeneous, the groupings into Corps and Wings is downright despicable!  But, don't worry, I'm working on an 'alternative history' (those that follow the blog know I'm fond of making up my own, historically different but at least semi-plausible backstory) to frame a campaign around, which I hope will help explain the hows and whys of the armies' organizations.

On a side note, you'll notice that with this project nearing completion, I now have a 6mm Napoleonic project which has become superfluous, which can be added to my 15mm WWII US and German superfluous project.  So, if you know anyone looking for Brit and French 6mm Napoleonics from Baccus, or 15mm WWII Late-War US and Germans from Plastic Soldier Company, please drop me a line as I'm ready to give a pretty good deal to get them out of the way and get me money for more 10mm toys.  If you're interested, please drop a comment here or send me an e-mail at bigjackmac at hotmail dot com (I never check the g-mail address associated with this blog, I just had to create one to start the blog).