From D-Day to Berlin, the Defeated

So, I got another set of guys finished off today, knocking forces out like it's cool.  So, these are Late War Germans, chock-full of Mausers and MP-40s, but also Stg-44s, MG-42s, Panzerschrecks, and Panzerfausts.  These are 100% Pendraken; as a matter of fact, these and the Red Devils I posted yesterday were my first purchase from the good folks at Pendraken.  Most weekends for almost two years I'd take these very Germans and beat down my Old Man's Red Devils like rented mules.

It's funny finishing these and looking back, and how far I've come in terms of painting and basing.  Not long ago all my buildings were simply painted khaki, and my men were based on tiles spray painted khaki, with stuff like "1st Squad, 2nd Platoon" written on the TOP, not side, of the base with a Sharpie.  My first next step was spray painting the bases green instead of khaki.  Then I went to a local shop (Texas Toy Soldier) and played IABSM with a guy who brought 10mm Pendrakens based in twos on little square bases that were covered in static grass, and I decided to go home and rebase mine.  I didn't have static grass, but I went and got some green flock and clump foliage, and that's how I've done most of my bases ever since.

In any case, these guys have been through about four sets of rebasing, and I resolve that this is their last one. 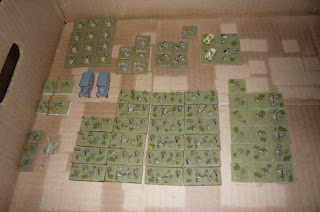 The whole force: 18 rifle teams, four engineer teams, five MG teams, five PzSchreck teams, two PaK-36 88mm ATGs (with Prime Movers), 3 Pak-40 ATGs (sorry, only one is pictured), two battalion/company commander stands, four company/platoon commander stands, eleven platoon/squad leader stands, an FO stand, and then there's my embarrassment: I have fifteen 80mm mortar stands...  As I mentioned previously, I had these based differently, and so at various times I actually needed fifteen mortar stands, but that is no longer the case... 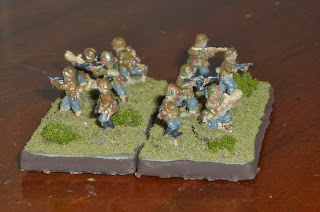 Closeup of a couple rifle stands, showing off the Mausers, MP-40s, StG-44s, and Panzerfausts.  I did a pretty simple but, I think, effective camo that's good enough for me to use them for whatever I need, i.e., Wehrmacht, SS, Luftwaffe, whatever comes up. 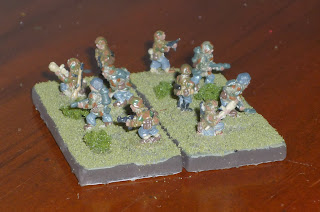 A couple of the engineer stands, showing off the flamenwerfers.  Also have mine detectors, always reminds me of a hockey player. 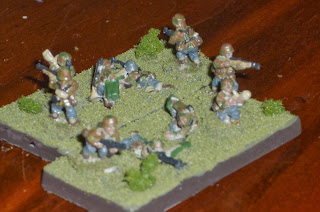 Couple more rifle teams, these with MG-42 LMGs  Actually they are MG-34s, but that's all we've got for bipod mounted MGs.  Which brings up a funny story. 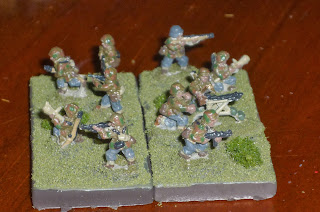 Another version of rifle teams with MG-42s, but this time tripod mounted.  I mentioned these were my first purchase from Pendraken, so when I ordered I had no idea that the MG-34 packs were bipod-LMGs; I guess I figured they were also tripod-mounted, just 34s vs 42s.  Well, I knew I wanted 42s instead of 34s, and so I ordered about five packs, for a total of 15 tripod mounted MG-42s (just like the mortars, which I needed an equal amount of with the way I was basing the force).  Later I figured out the whole 'hey, Pendraken does make a LMG version, and so I ordered some, but, with this newest basing scheme, not enough.  So, I'm stuck with rifle teams featuring bipod and tripod machine guns.  It works for me... 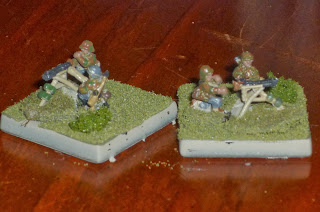 A couple of the MG-42s, this time based as actual MG teams. 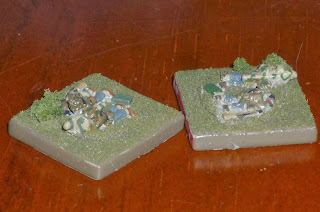 A couple PzSchreck teams.  I'm sure realistic, but I really wish they weren't prone.  I'm okay with the fact they're molded together, and I'm really happy it's a gunner and his assistant.  With US Airborne bazookas, for example, they come in a pack of 10, which is 10 guys with a bazooka.  Love the fact they're standing up, but when you need 12 of them you end up having eight laying around... 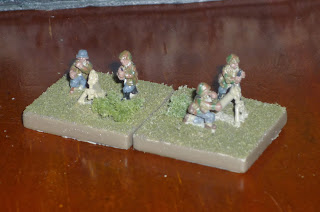 A couple of my FIFTEEN 80mm mortars. 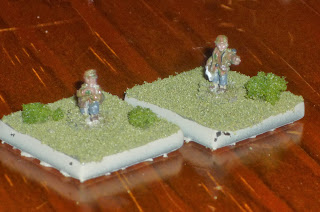 A look at a coupleof my basic leaders, from the German Officers pack. 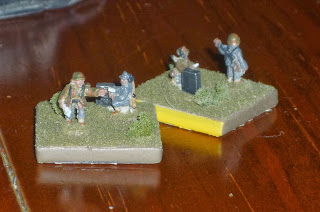 A couple of company/platoon commander stands (company/platoon because it depends on what echelon I want to play at), using an Officer and a radioman. 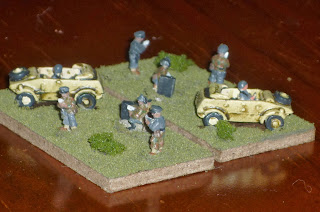 These are hilarious!  These are my two battalion/company commander stands.  I was wrong, this force is not 100% Pendraken, because the two Kubelwagens are actually from Minifigs.  The pic may not be good enough, but does anyone recognize the officer figures?  And the radioman facing away is 'different' as well... 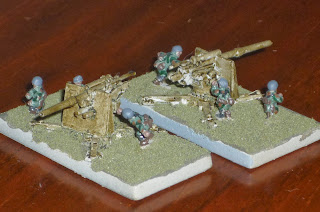 Two Pak-36 88mm guns.  Don't ask me why I got FJ crews, or painted them in a different camo than the rest of the force, or why I gave all of them gray helmets.  But, it works for me. 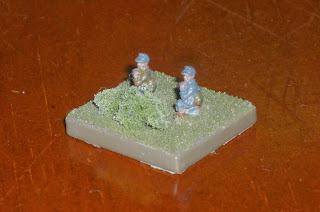 This is the Forward Observer stand; just two of the German officers I based together. 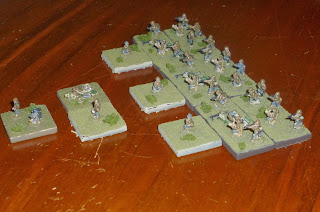 Here's a look at what a platoon would look like for a Chain of Command game: 3 rifle squads, each with a LMG team base and a rifle team base, a squad leader, a PzSchrek, a Plt Sgt, and the Lieutenant with radioman. 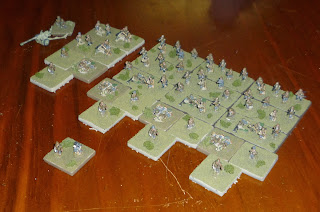 Here's a company, with three rifle platoons, each consisting of three rifle stands, a PzSchreck stand, a Plt Sgt, and a Plt Commander, a Wpns Plt with two MG teams, two mortar teams, a PzSchreck team, and a PaK-40, and then the company commander out front.  I need to pick up a few packs, i.e., some more PzSchrecks, some more MGs, and some more officers, in order to field a full battalion (I have 75mm field guns on order).

I still have my US force to finish repainting and then rebasing, then all I've got left is Vietnam and modern stuff to finish.  Before my giant orders get here from Pendraken and Minifgs...  I need to get some gaming in.