As I mentioned, no gaming this past weekend, but I was pretty productive in terms of cleaning stuff up, painting, and basing, and other than the completed stuff I'm posting, I also moved down the road a ways in terms of getting a lot of other stuff done as well.  I keep dreaming of Napoleons; I bought a slew in 10mm, painted by someone else, based for brigade-level games (like Blucher, Volley and Bayonet, Grand Armee, etc...), then determined that really wasn't the type of game I was looking for (if anyone is interested in these Napoleonics: http://blackhawkhet.blogspot.com/2013/12/10mm-napoleonic-french.html and http://blackhawkhet.blogspot.com/2013/12/napoleonic-coalition-forces.html , please let me know.  Note, these have almost entirely been re-based for 12 infantry  and three cavalry per stand).  Then I bought a slew of Baccus 6mm Napoleonics, painted some, but ultimately bogged down and sold them off.  Well, I hopped in again, of course.  Next month will be a full year ago that I bought a slew in 10mm Napoleonics from Connie and Russ over at OG 25s.

Well, suffice to say, I'd gotten some stuff done, but not a whole lot...  But, having seen Steve on his "Sound Officers Call" blog cavorting about, having a good time playing some Black Powder (http://soundofficerscall.blogspot.com/2017/03/friday-night-naps.html) has spurred me to action, and so I got busy to painting and basing.  I painted up a total of six French and one Austrian battalions, and decided to base one of each up to see how they'd look; that was actually part of the problem.  Part of my sluggishness was regarding the issue of basing.  I had planned on going with big, 80-man battalions, but I saw Steve's basing up of 40-man battalions and figured that would work just fine.  So let's take a look. 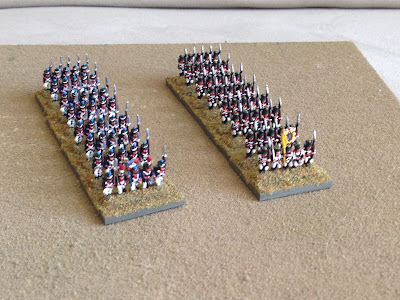 One battalion each of French (left) and Austrians (right).  I love the Old Glory five-man strips, they're perfect for Napoleonics (for what I'm wanting to do).  But I hate painting the flags...  So, each battalion is four stands of ten men, with my stands being 30mm squares. 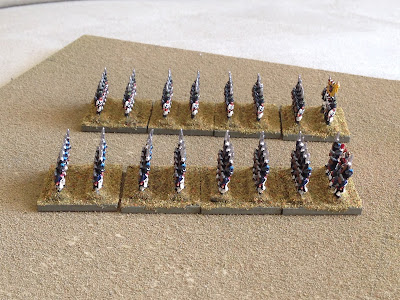 Looking from the right flank. 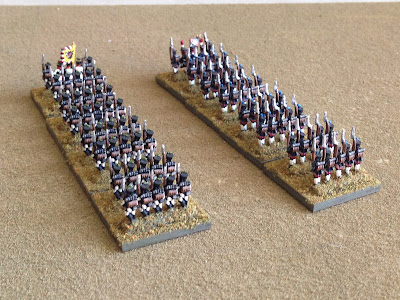 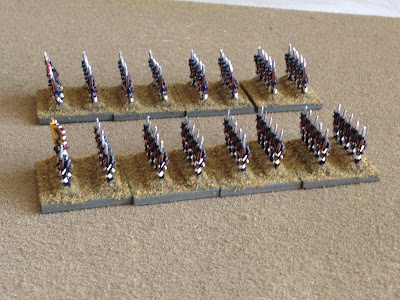 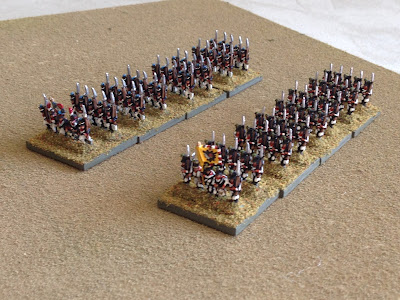 And from the port quarter.  So, the point of four-base battalions is to be able to change formation... 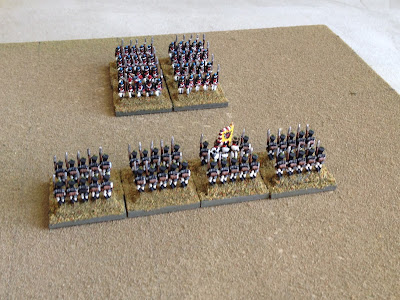 Like this.  The Austrian battalion is in line, as the French close in attack column. 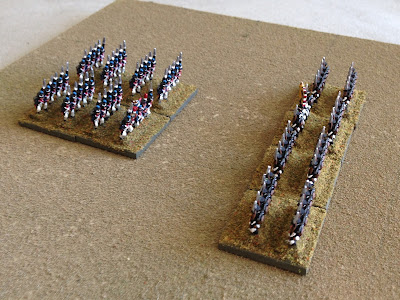 Another look at that same setup. 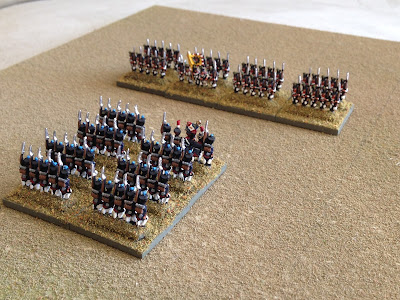 The French are pushing forward under heavy musket fire. 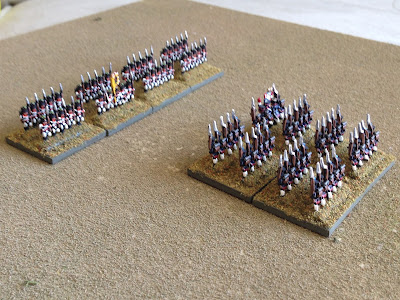 Will they make it? 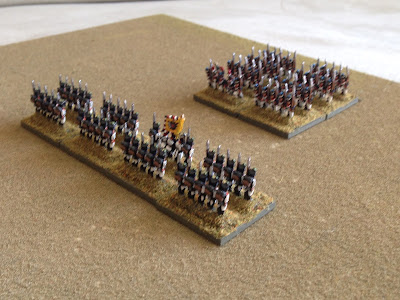 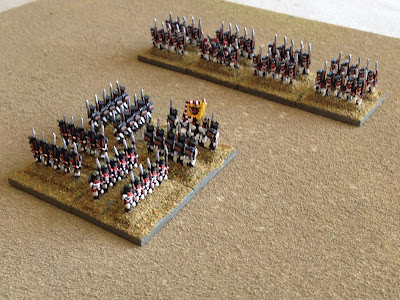 French cavalry come up on the flank (off camera, of course, since I don't have any painted up).  The French shake out into line (top) as the Austrians are forced into square.  So, with four bases, I need to figure out how to form square.  Here's one look (all four bases facing a different direction). 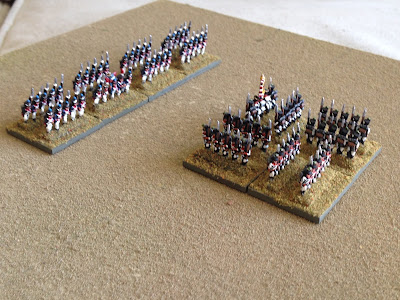 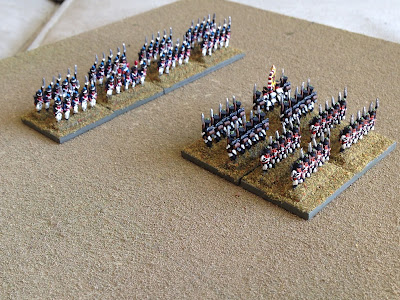 In this photo I've got the Austrians in square using a different representation.  The front two bases face the enemy, the rear two bases face opposite.  I kinda like it, but could see not paying attention and confusing it for attack column, not noticing the two rear bases are facing to the rear. 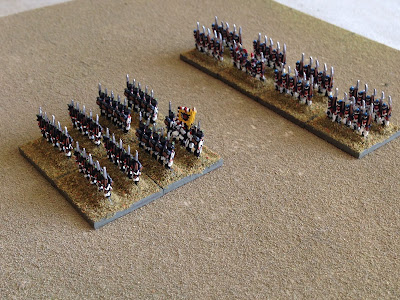 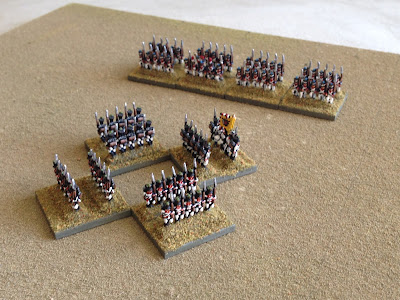 And the last representation of square, where they're kind of in a star pattern, each base touching others only at the corners.  Looks a little goofy, I suppose, but there's no confusing what it is, and it finally has a hollow center.  I think I like this one best, actually.  What do you think? 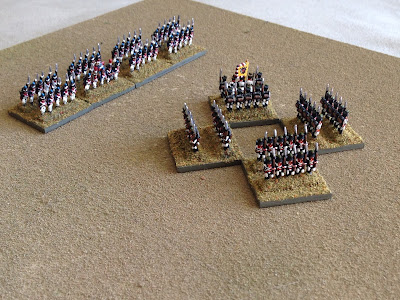 And one more shot.

I need to start knocking these infantry out, then move on to cavalry, then artillery (to include limbers), then command.  Damn, plenty of work to do, but I've got to get to it if I ever hope to actually play a damn game!  My plan it to do small chunks: six French infantry battalions, then six Austrian, followed by a couple cavalry regiments each, a couple artillery batteries each, and a couple command stands each.  That way I can at least MAYBE get a game in this decade.  The danger there is that I get enough done for a game and say hell with finishing up the rest!  Anyway, thanks for looking, and next up is some more modern troops.