I have been on a tear the last year or so, buying up 15mm stuff, from WWII to Vietnam to Moderns.  And so when fellow TMPer "Bashytubits" bought a 3D Printer and began turning out Cold War NATO and Warsaw Pact vehicles, he had my attention.  He's been advertising his wares on TMP and I liked the selection and how the initial pictures looked, so I figured I'd give it a shot.  I guess it's been a couple weeks ago now, but I placed on order with him, shuttling funds via PayPal, and a few days later I was the recipient of some 15mm plastic Cold War goodness.  I ordered more (a total of 13 vehicles), but haven't had the time to finish all of them, but I've got six vehicles completed and  I really like them and wanted to show them off.

So below you'll see six plastic vehicles from BashTubits' 3d Printer: two T-62s, two BMP-1s, and two BTR-60s.  I apologize as I now wish I'd have taken initial ("before") photos, but I apologize, you'll have to live with just the final ("after") photos.  And I beg forgiveness on another note as well: these are definitely Cold War-era vehicles, but as I intend on using them in a fictional, Imagi-Nation-style dust-up, I actually painted them up in quasi-'modern' Russian camouflage.  I've placed two Khurasan 15mm Private Military Contractors next to the vehicles for scale, in quite a few of the pics. 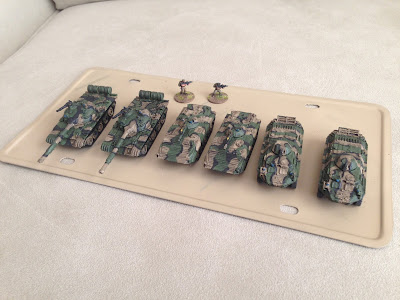 The whole shebang, from left: two T-62s, two BMP-1s, and two BTR-60s.  All of these vehicles are two piece, hull and turret, and when they arrive they are U-G-L-Y!!!  Coming out of the 3D Printer, they've got a lot of plastic stuff that needs to be cleaned up.  I'll admit that it was really ugly and I was really aggravated, but in the end I simply busted out my X-acto knife and it took me between 15 and 20 minutes per vehicle to clean up.  I figure that's about the same as it's taken me to do other plastic vehicles (cleaning up and assembling).  So you clean out all the excess plastic, then slap the turret on and spray prime them, no sweat. 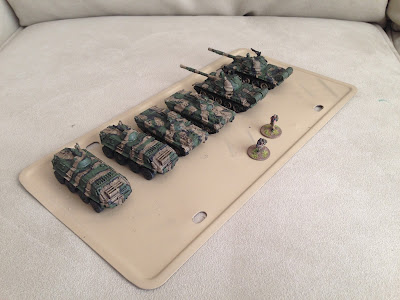 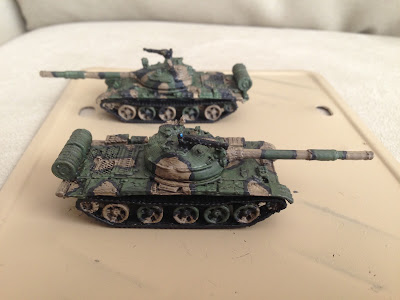 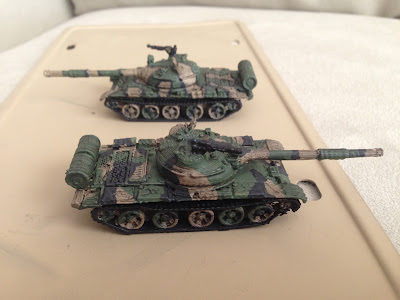 Again; you can see I did the camo on each vehicle up slightly different. 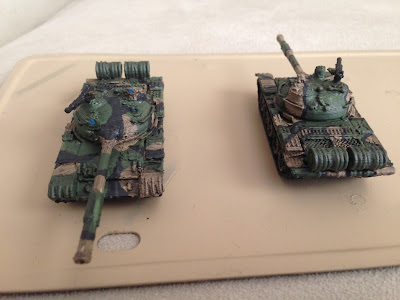 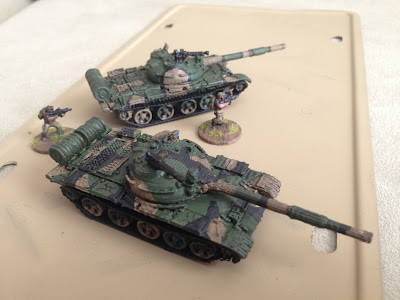 With 15mm troops to show scale.  Looks right to me. 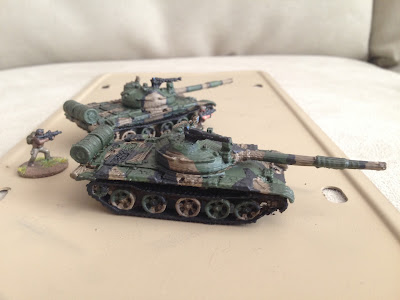 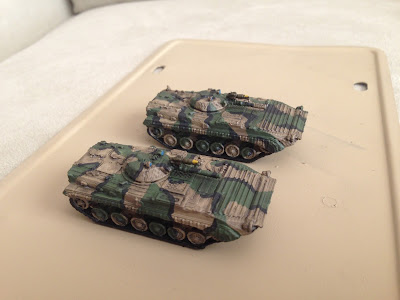 On to the BMP-1s; please recall these are the initial model with 73mm cannon, Sagger ATGM mounted atop.  When I first saw the Sagger I thought the detail was a bit soft, but once painted up it looks fine (in my humble opinion). 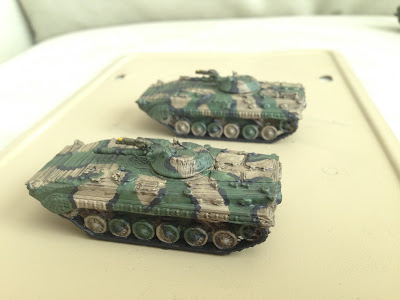 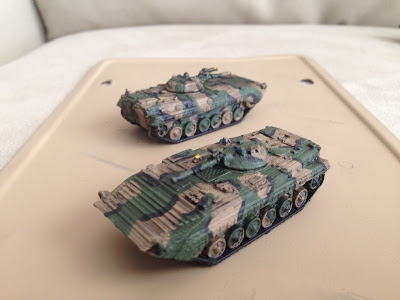 Front right/rear left quarter.  Yeah, I can never help myself but to paint optics and lights royal blue, and paint something yellow on anti-tank weapons, it's a character flaw.  I don't get it myself, I guess I just like my weapons to have a bit of flair ;) 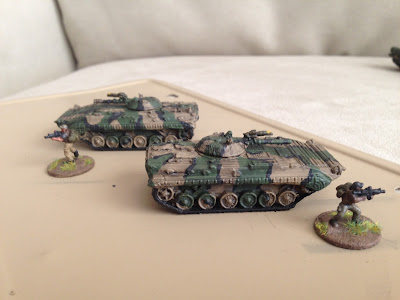 Flank shots, with figures.  Look at the relief and detail, it's really great. 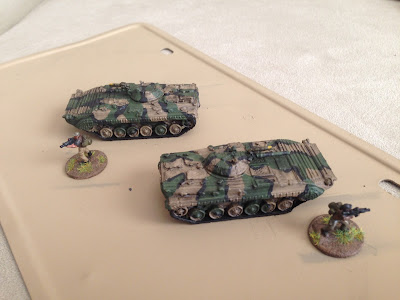 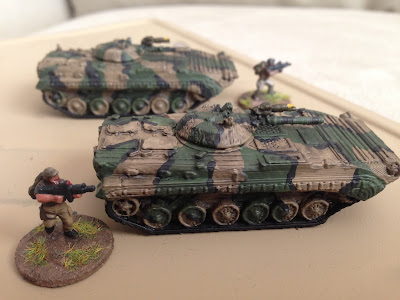 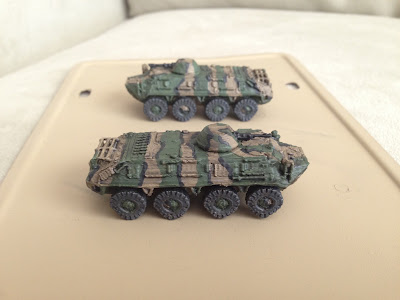 Before moving on to the BTR-60s.  I don't know what it is, but I just like the look of BTRs. 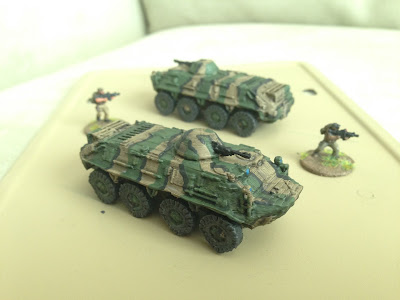 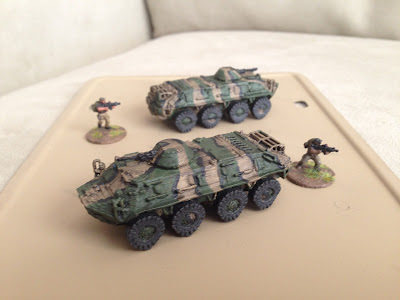 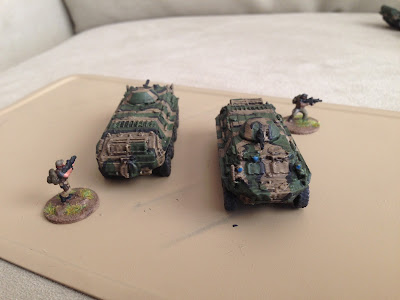 Fore and aft; you can see the early BTR circular rear troop hatches at left. 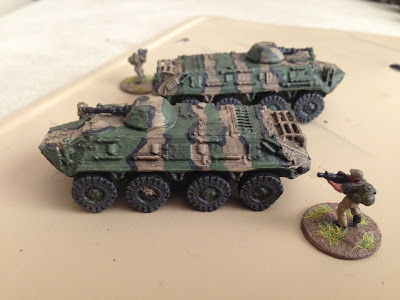 Closer up on the flanks. 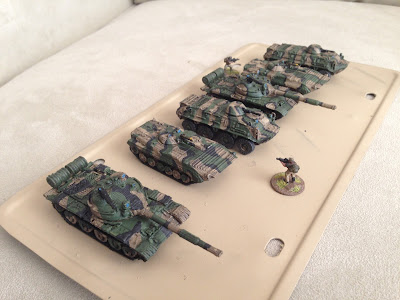 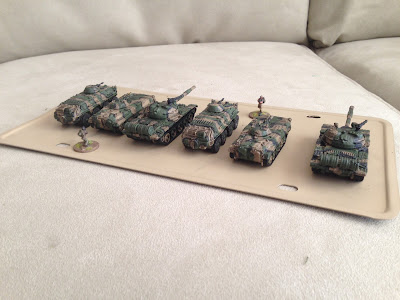 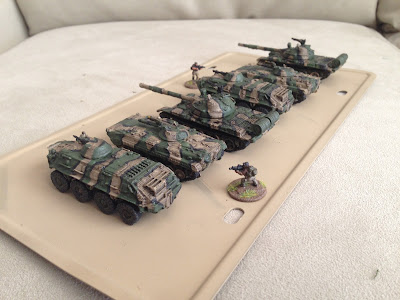 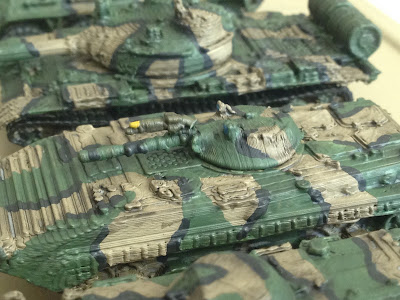 And a couple close-ups.  I'd seen on TMP where some folks were bagging on the level of detail and the texture of 3D printed vehicles.  I'll say this: it appears the 3D Printer has a bit of a rough time with small-diameter barrels.  The BMPs 73mm cannon has not been modified in any way; you can see it's just a tad uneven.  But other than that, the level of detail is great to me, and while there are some 'striations' if you get up super close, none of it is anything I can't live with at gaming table range. 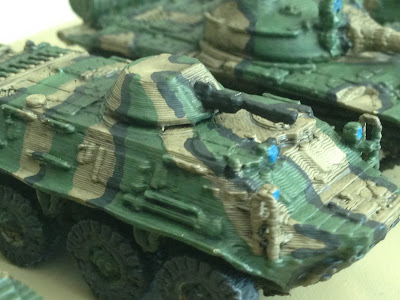 Close up of the BTR.  Again, here you can see some striations, but keep in mind these photos are larger than real life. 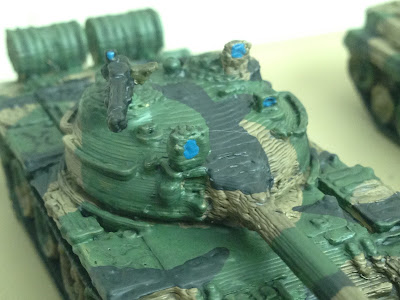 And lastly, a close up of the T-62.  So yeah, you can see some lines if you've got your nose pressed up against the models, but if you think it's a problem I'd kindly ask you to back to the pics at top.  I'm very happy with these vehicles, and intend on ordering more.  After I finish up the rest of this order ;)

I've had quite a few (e-mail) conversations with him, and Bashytubits is continuing to work on new models.  If you're looking, I need that Warrior with Chobham armor!!! ;)  And a Gepard, probably some M-60s...

On a side note, real life butted into my wargaming time in a serious way last weekend, and what little time I had I used to work on these.  So sorry, no games :(  But quite your whining, I'll get some in this coming weekend, and I've already posted twelve batreps in 2017!!!