It's 0500, 1 Sept 1939, and the war has just begun as the German 10th Army is crossing the frontier.  Kampfgruppe Klink is assigned to the operational control of the 4th Panzer Division, and is in the vanguard of the invasion.  Col Klink's plan for his sector of the line is to use his infantry to open the hole, then have his motorized reconnaissance and panzers pour through in the direction of Mokra. 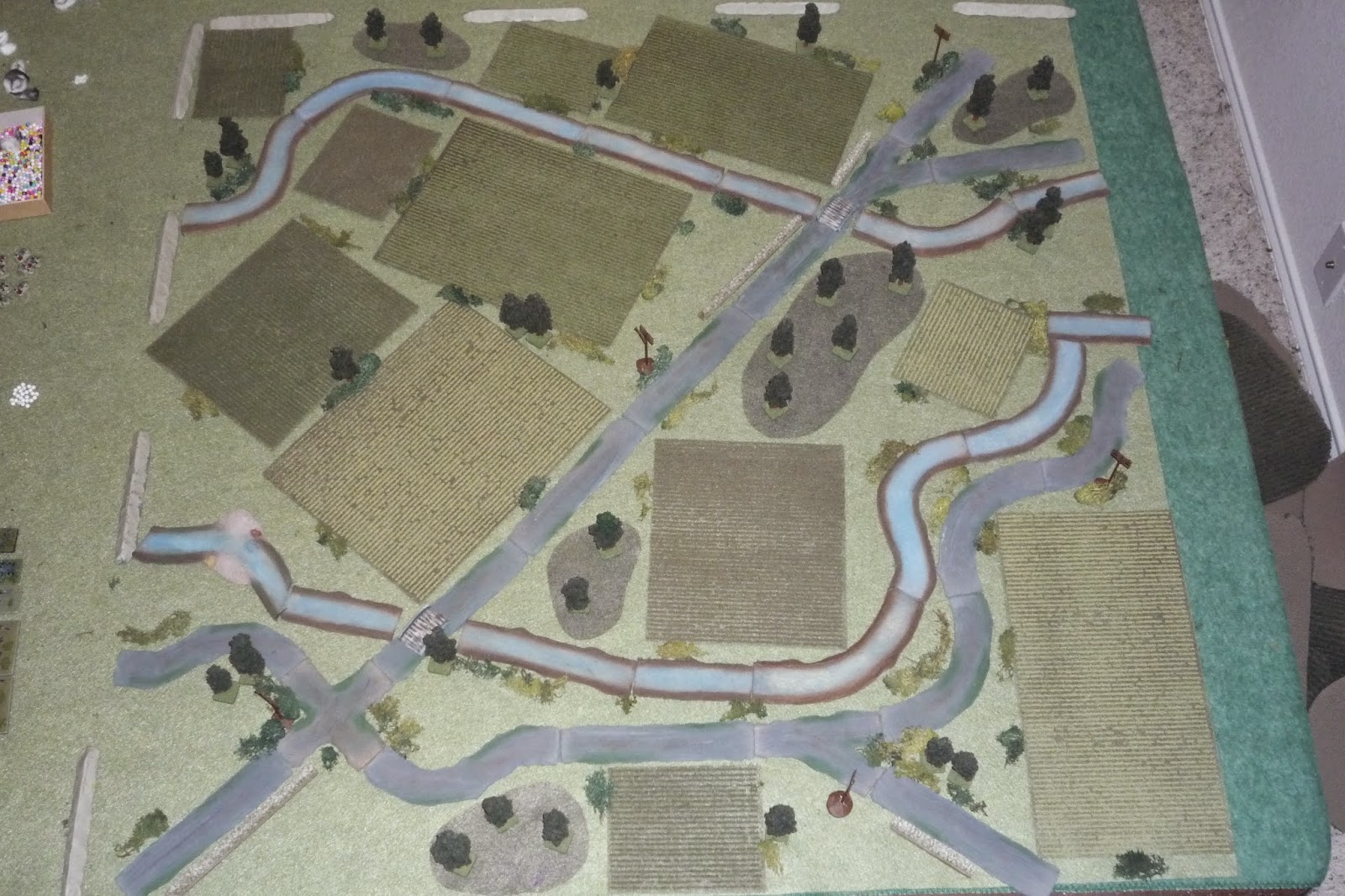 Overview: North is up, Germans attacking from the west (left), Poles defending from the east (right). 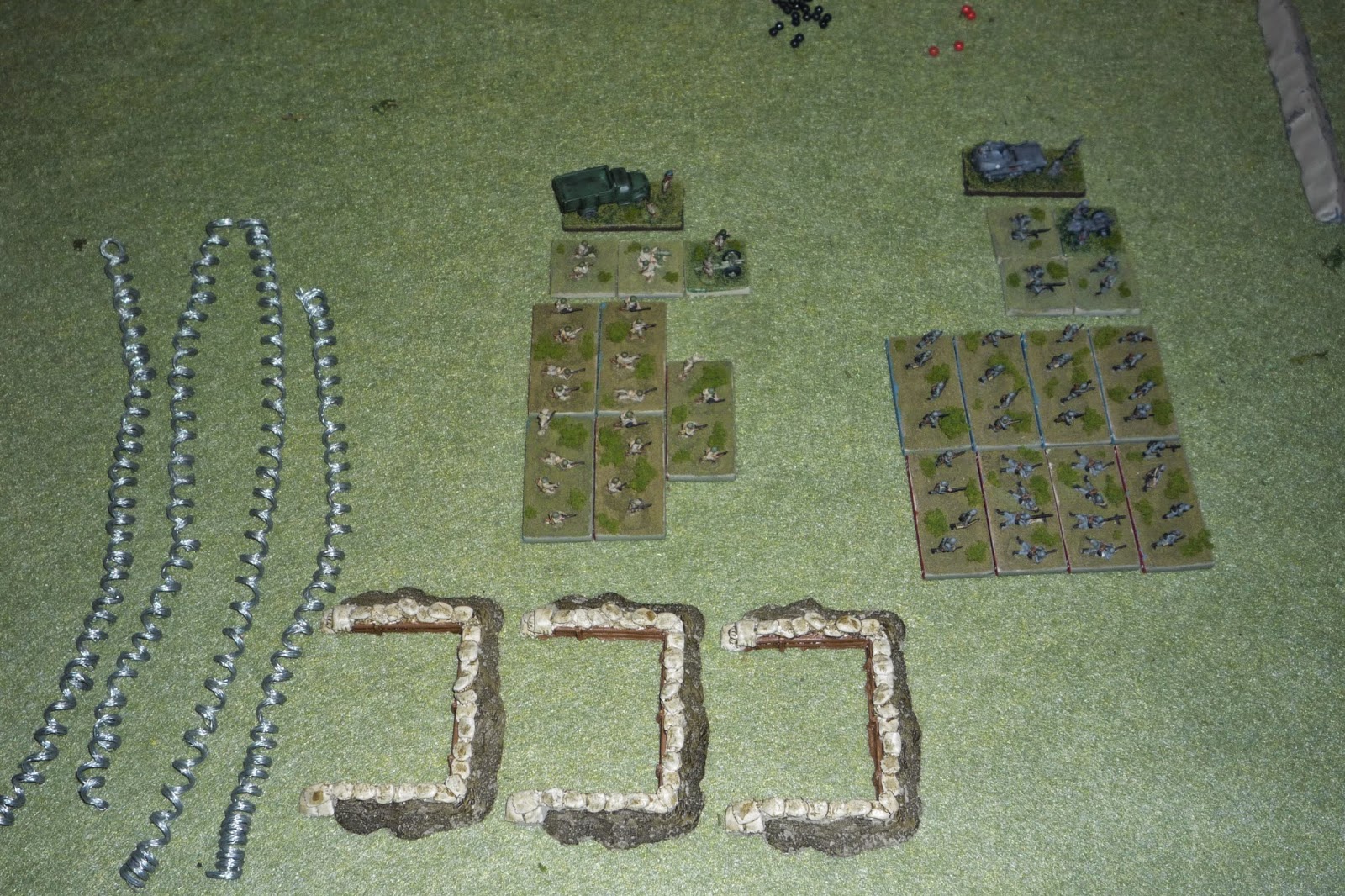 The opposing forces, Poles on left (please forgive me as I don't have any Poles, so I'm having to proxy Soviets, and even some British vehicles, for the Poland campaign), Germans on right. 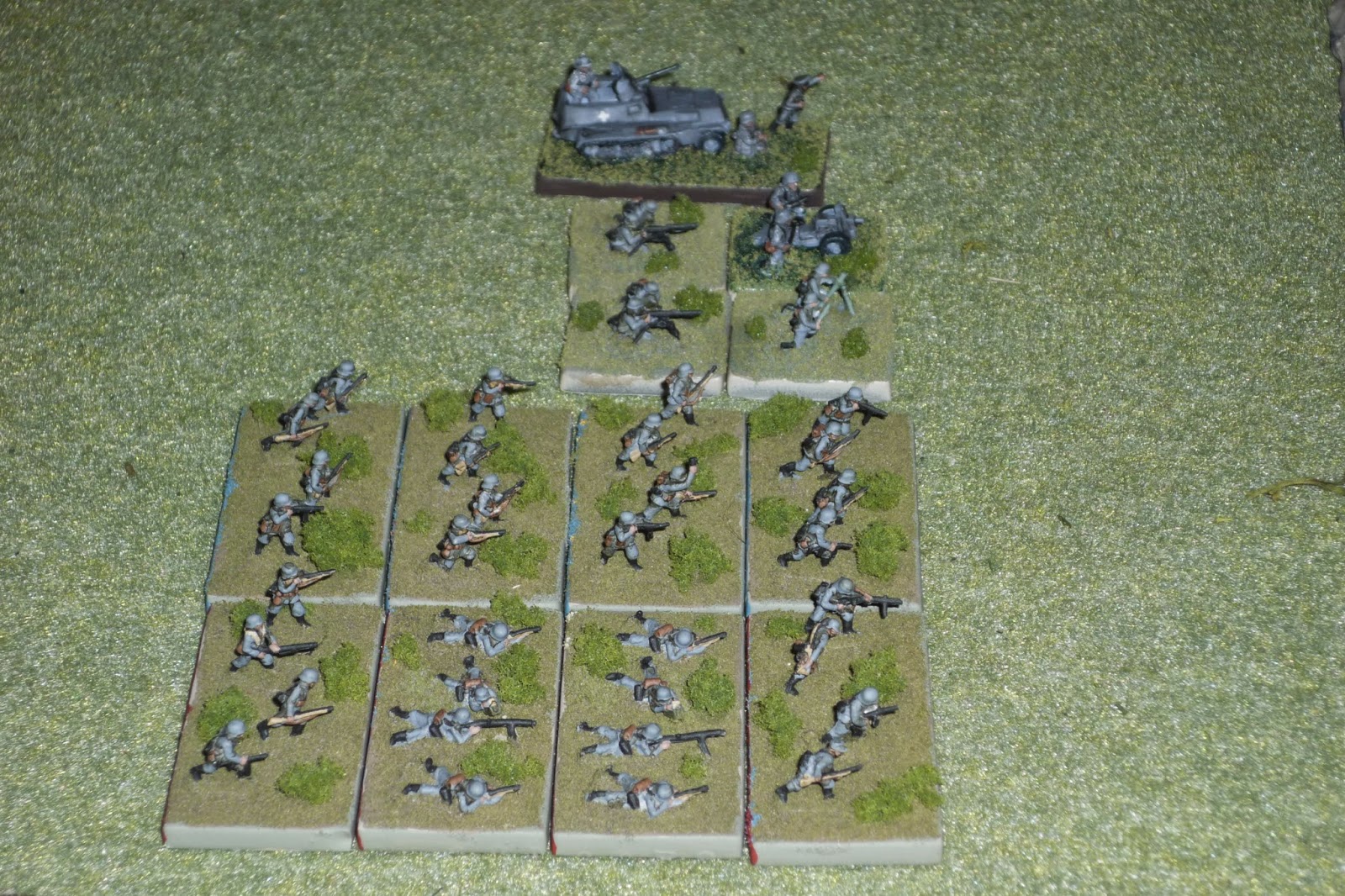 Ze German force: Command stand at top (the Schutzen Company commander, 1st Lt Freitag), the weapons platoon's machine gun squad (of two guns, led by Corporals Steinkamp and Creuzburg), one of the 75mm field guns (Sgt Oberlander), and eight rifle sections.  The first is 1st Platoon's HQ section, led by 2nd Lt Nessler.  All of Nessler's platoon is present, as are the 1st, 2nd, and 3rd squads of 2nd Platoon (2nd Platoon's commander, 2nd Lt Krugmann, and his 4th Squad are detached as local security on the left/northern flank).  3rd Platoon is on the right/southern flank, tying in with elements of 4th Panzer Division, and 4th Platoon is in reserve, while the remainder of the KG is waiting nervously near its vehicles. 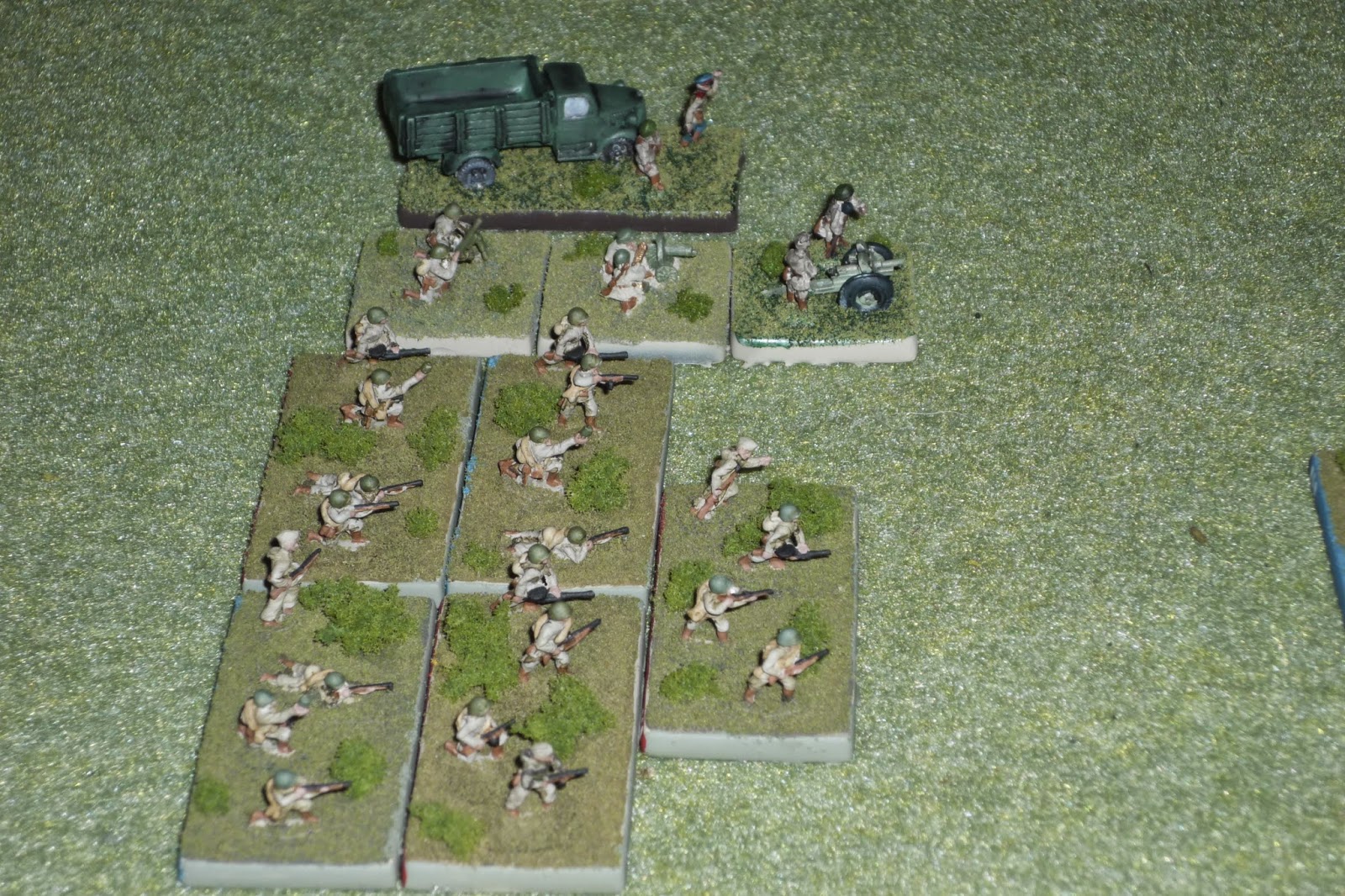 The Poles have a Command stand, a 76mm field gun, a .30 caliber machine gun, an 82mm mortar, and five rifle squads.  They also have three bunkers and four strands of concertina wire. 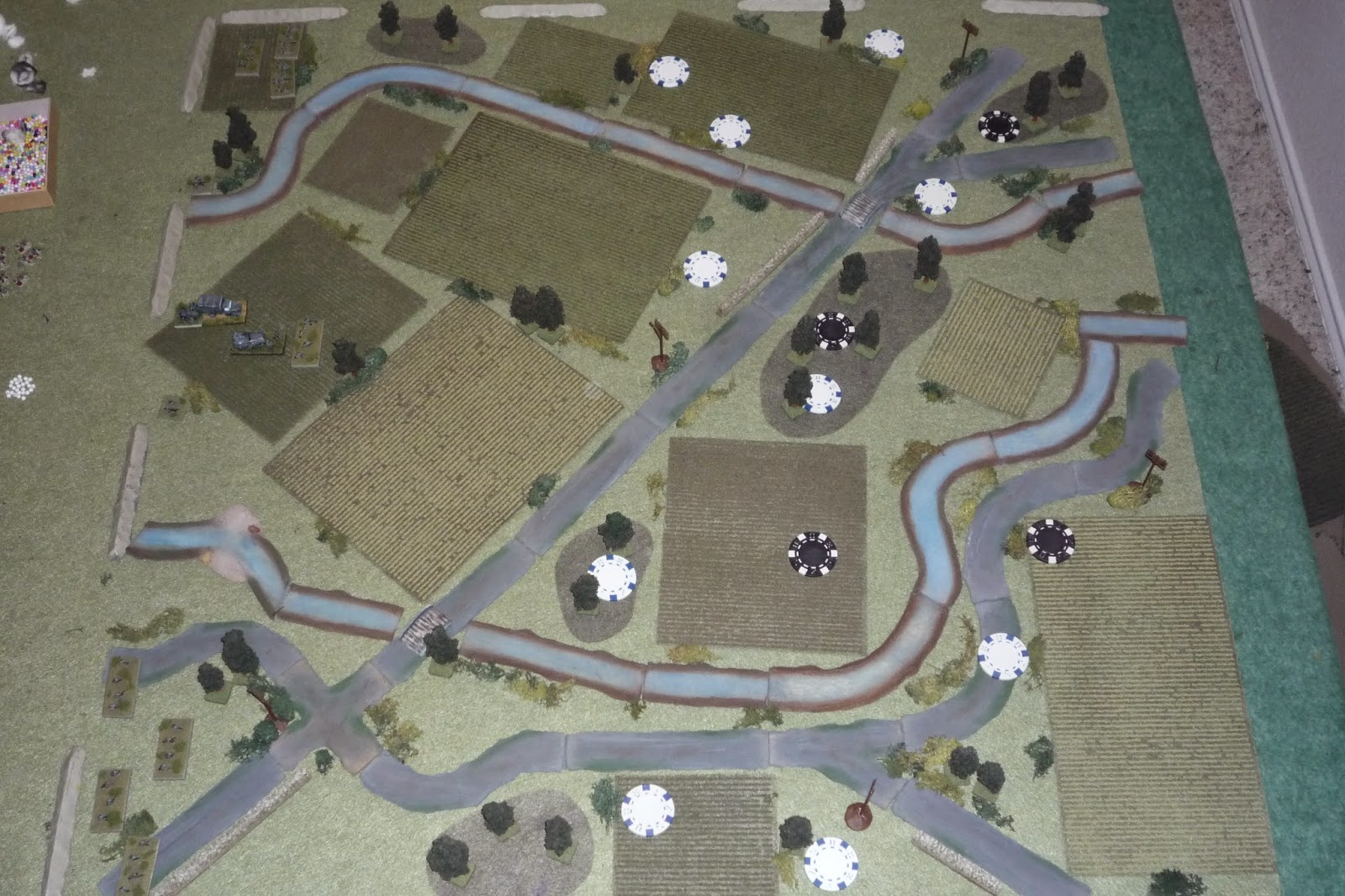 Germans are placed at their starting positions (left), while the Poles are placed on blinds. 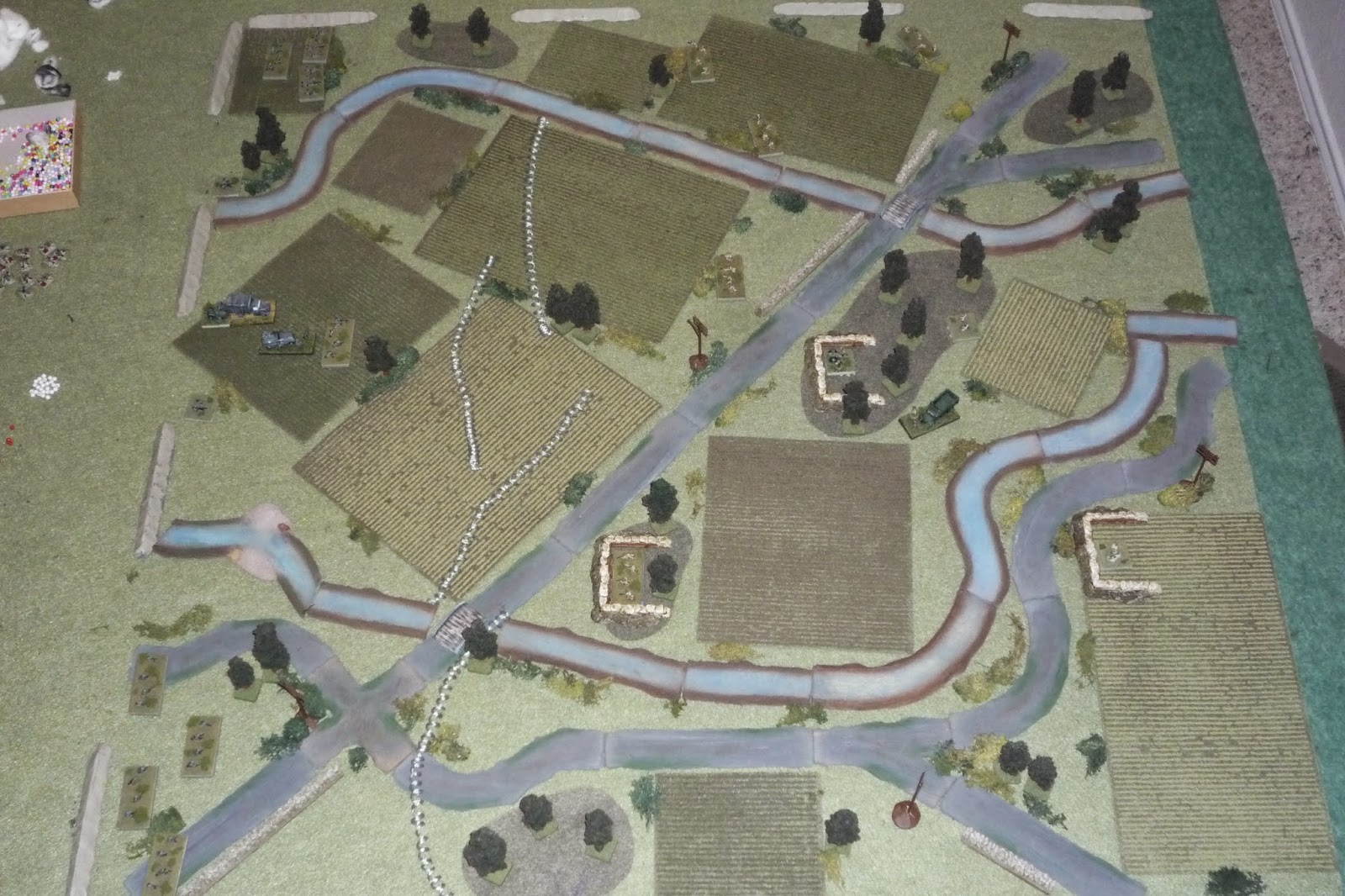 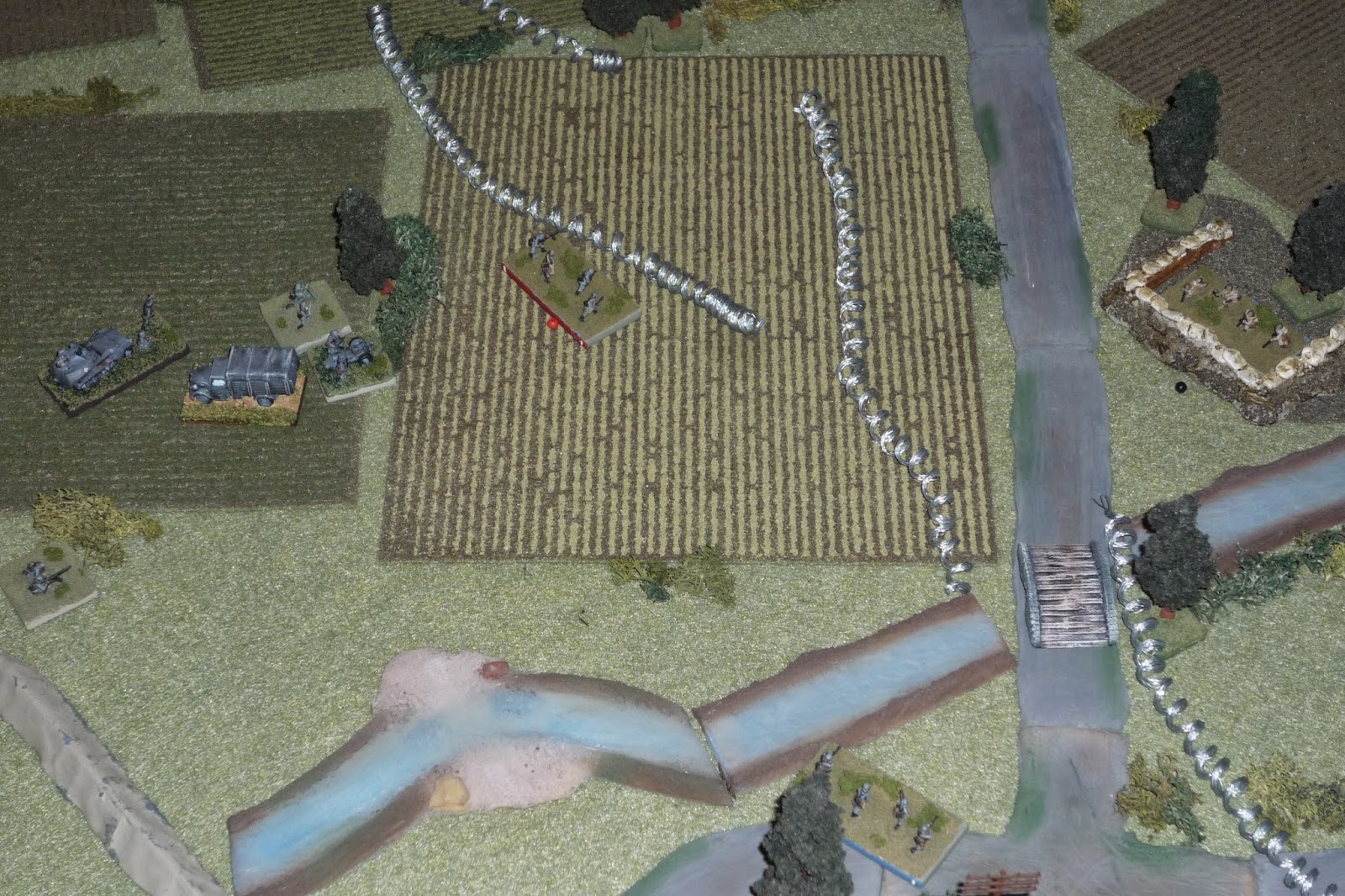 And so it begins.  Cpl Hackl led his squad up to the wire (center) and fired at the enemy bunker, and the bunker returned fire, causing them to fall back (they are at top center with red bead, before falling back next to the CO at far left).  They were followed by the truck, which unlimbered the 75mm field gun while the 80mm mortar hopped out (this would prove to be a key tactical error; having the field gun and mortar right next to each other proved an irresistible target for the Polish field gun and mortar).  Meanwhile, Sgt Haas moves his squad up (bottom center) and they fire at the rifleman in the bunker, no effect. 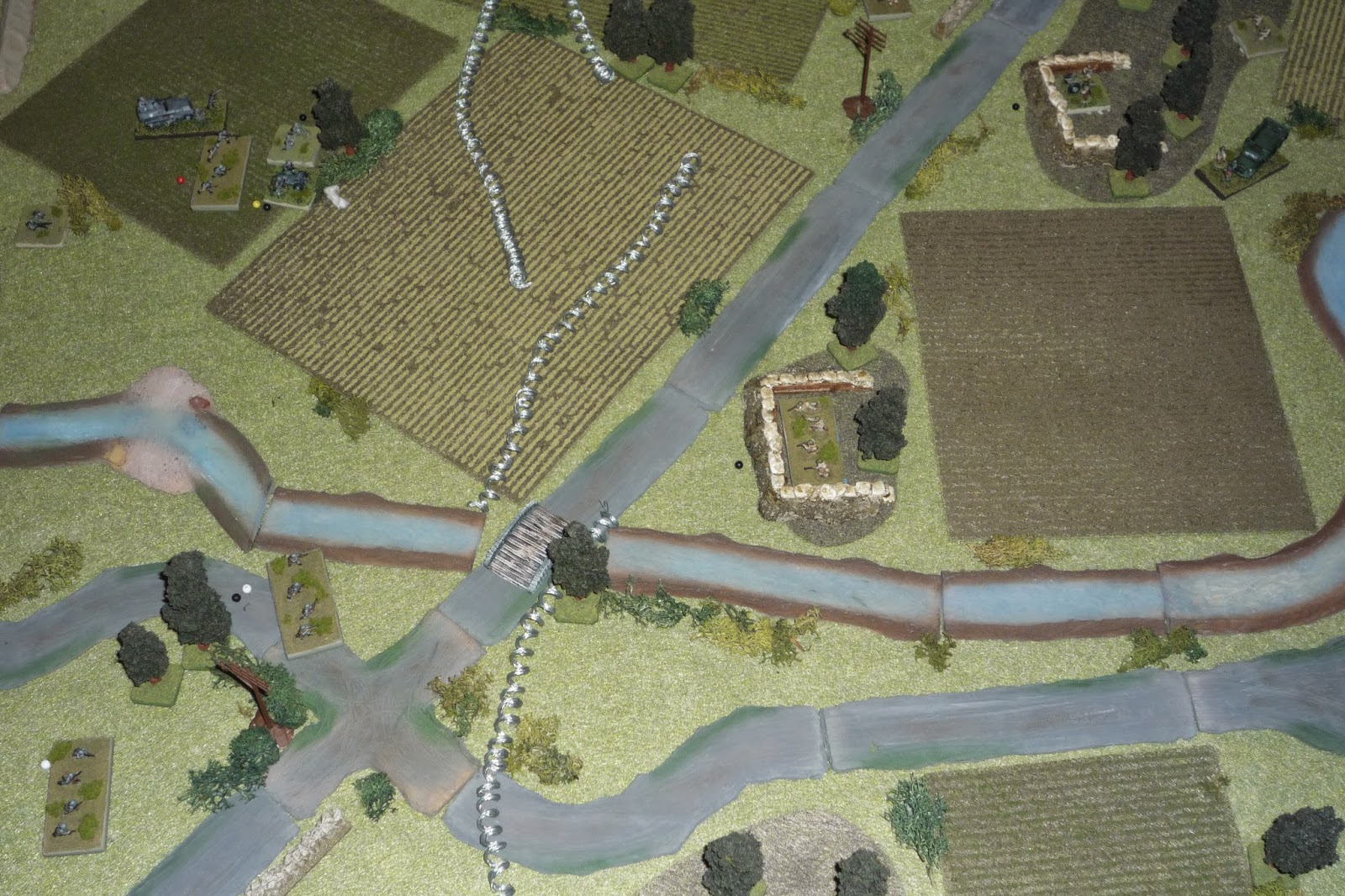 The enemy field gun (in bunker at top right) fired at Sgt Oberlander's field gun, pinning them.  The enemy mortar (also top right) targets Sgt Haas' squad (bottom left, in street with white bead), wounding several men.  But the real disaster was that the rain of mortar shells caused 2nd Lt Nessler and the HQ section (bottom left) to run off the map! 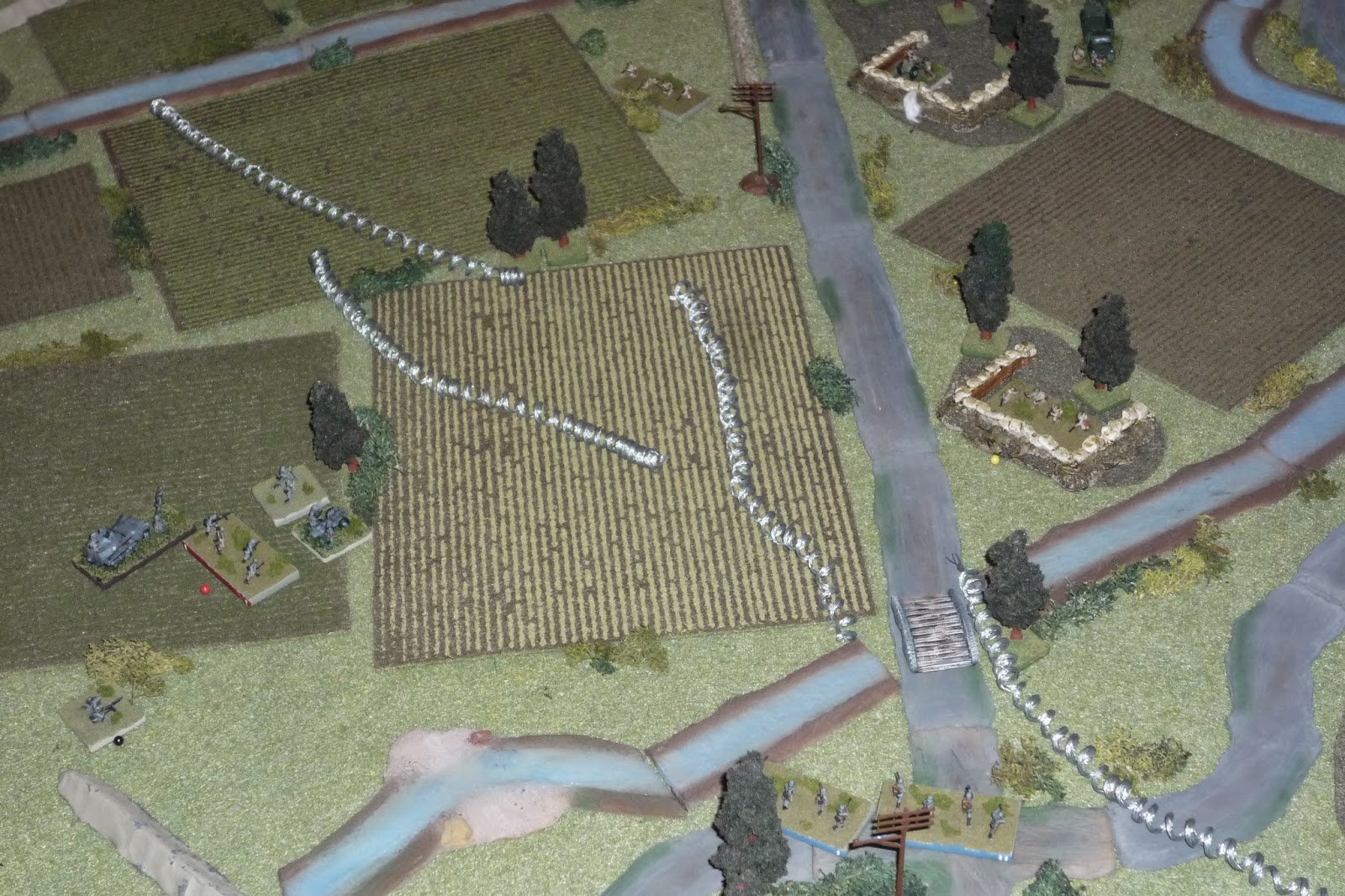 At bottom left, the Cpl Steinkamp's MG34 fires on the near enemy bunker, pinning them, while Sgt Landauer rushes his squad bottom center) up to Sgt Haas' squad in an attempt to rally them, but they fail...  The CO, 1st Lt Freitag, rallies the field gun crew, who pump several rounds into the enemy field gun's bunker (top right). 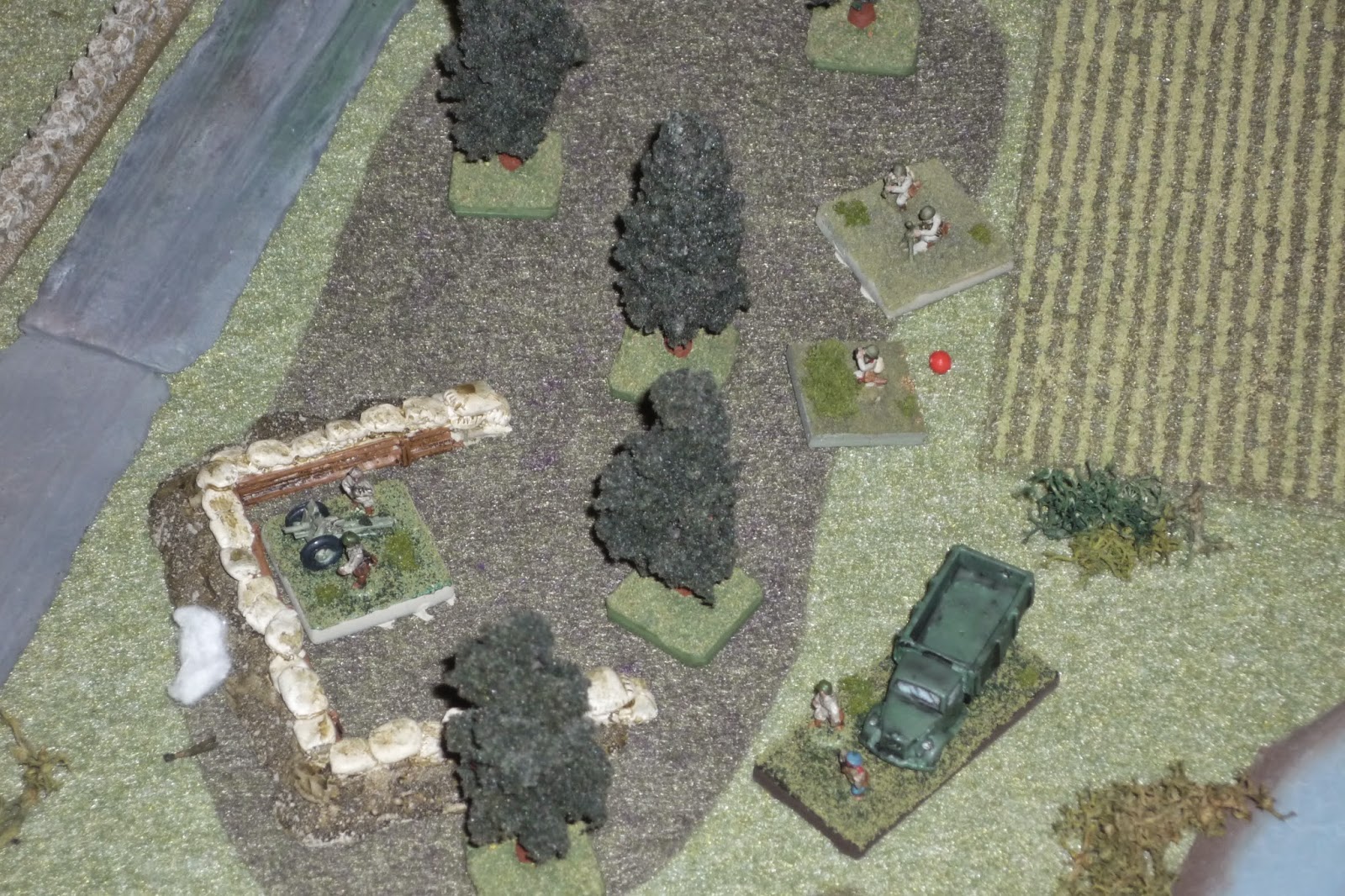 Causing the crew to abandon the gun (red bead; I don't play the rules as written here, I allow crews to rally and return to the gun).  However, the Polish CO quickly rallies them. 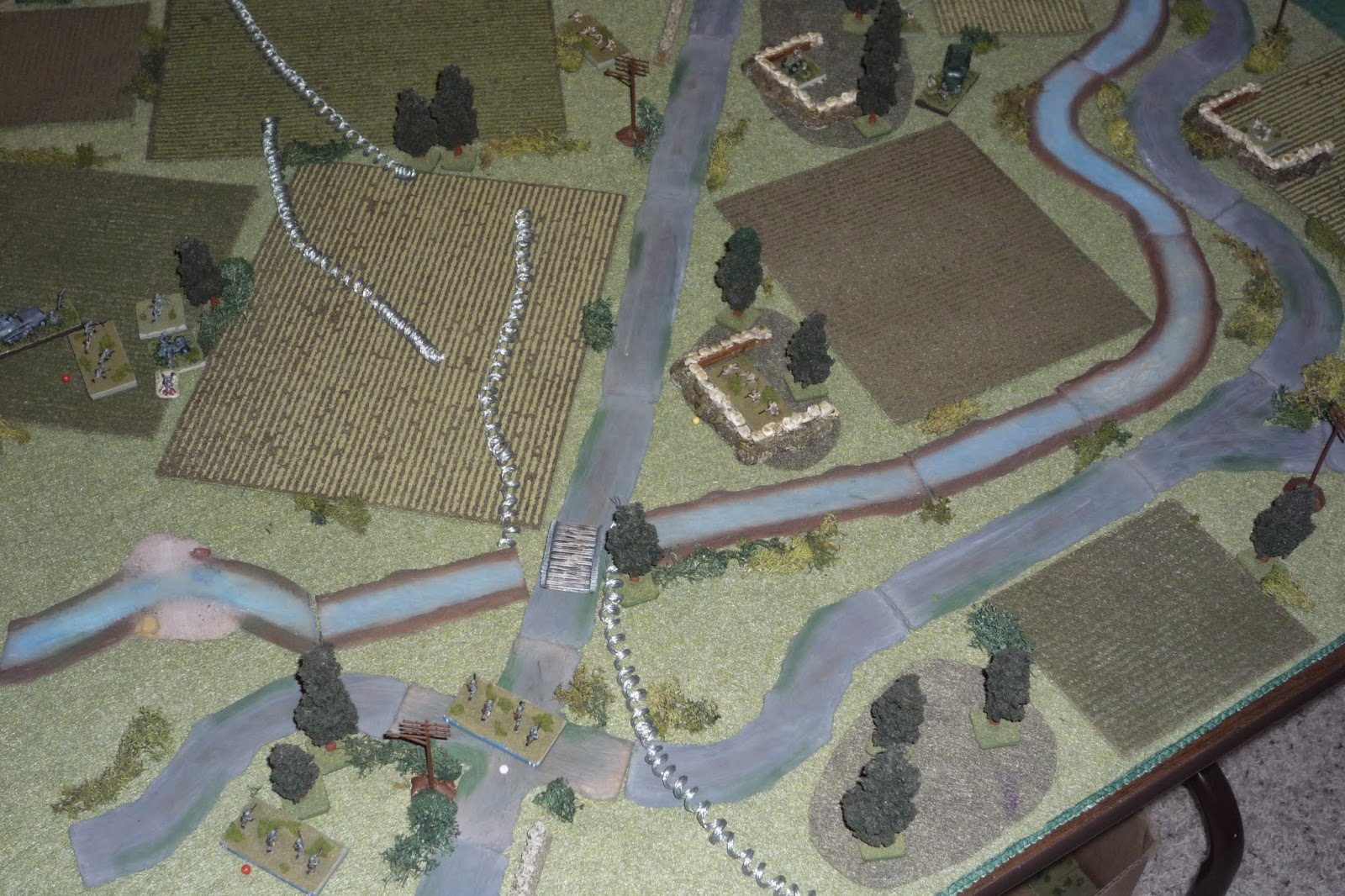 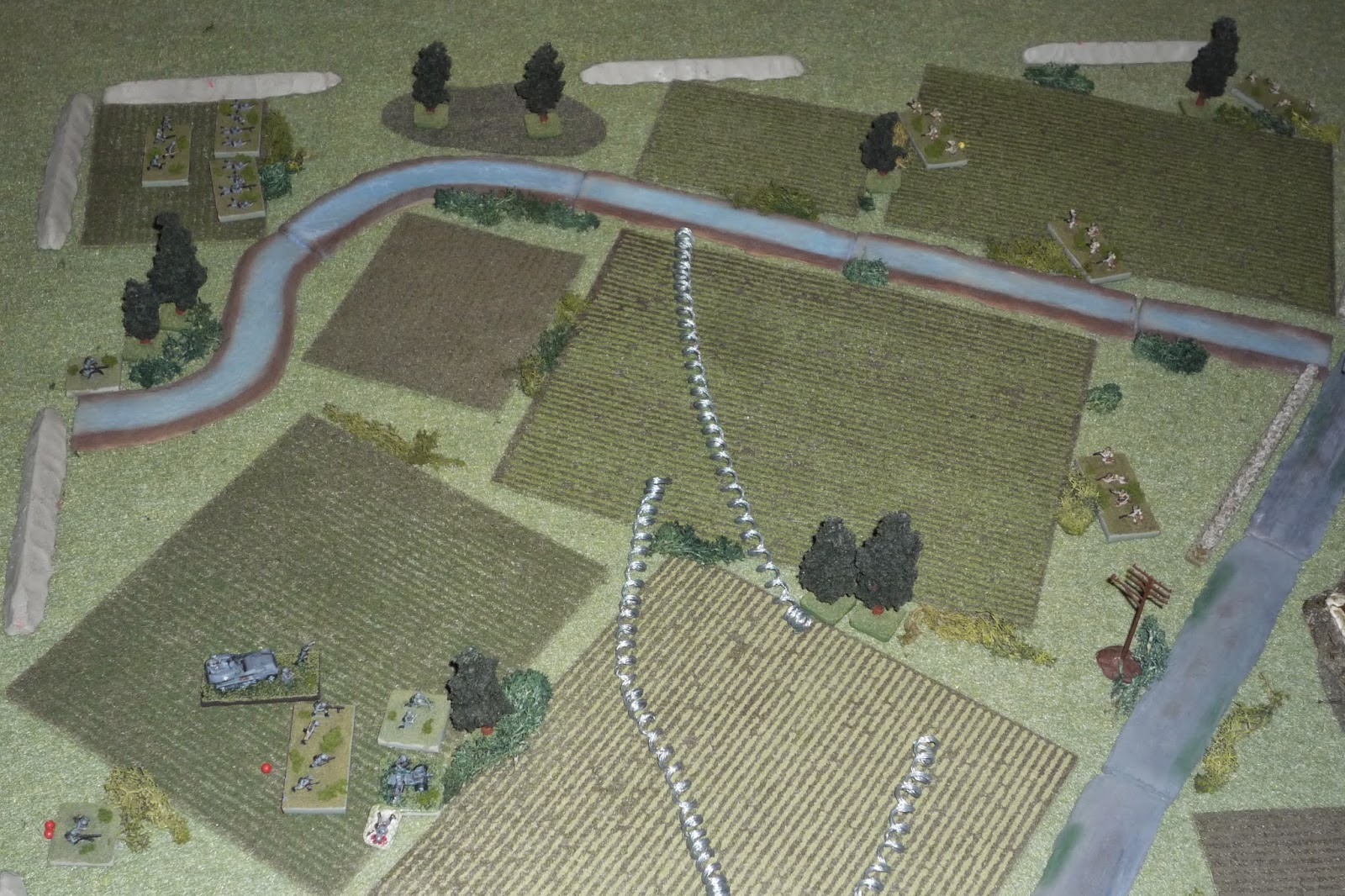 Germans roll firefight, which is not great, I really need to be moving forward to put pressure on the Poles.  Cpl Hackl's squad tries to rally and fails (red bead on rifle squad at bottom left).  Off camera, Sgt Landauer's squad, having been pounded by mortar fire twice, tries to rally but fails and runs off the map, though Sgt Haas' squad finally recovers.  Cpl Steinkamp's MG34 (bottom left) fired to no effect, then received return fire from the enemy's MG, which saw Steinkamp's men flee off the map...  Cpl Osswald's MG34 (lower top left) pinned an enemy squad at top right, while the 80mm mortar took that same concentration of enemy troops under fire, but didn't hit a damned thing. 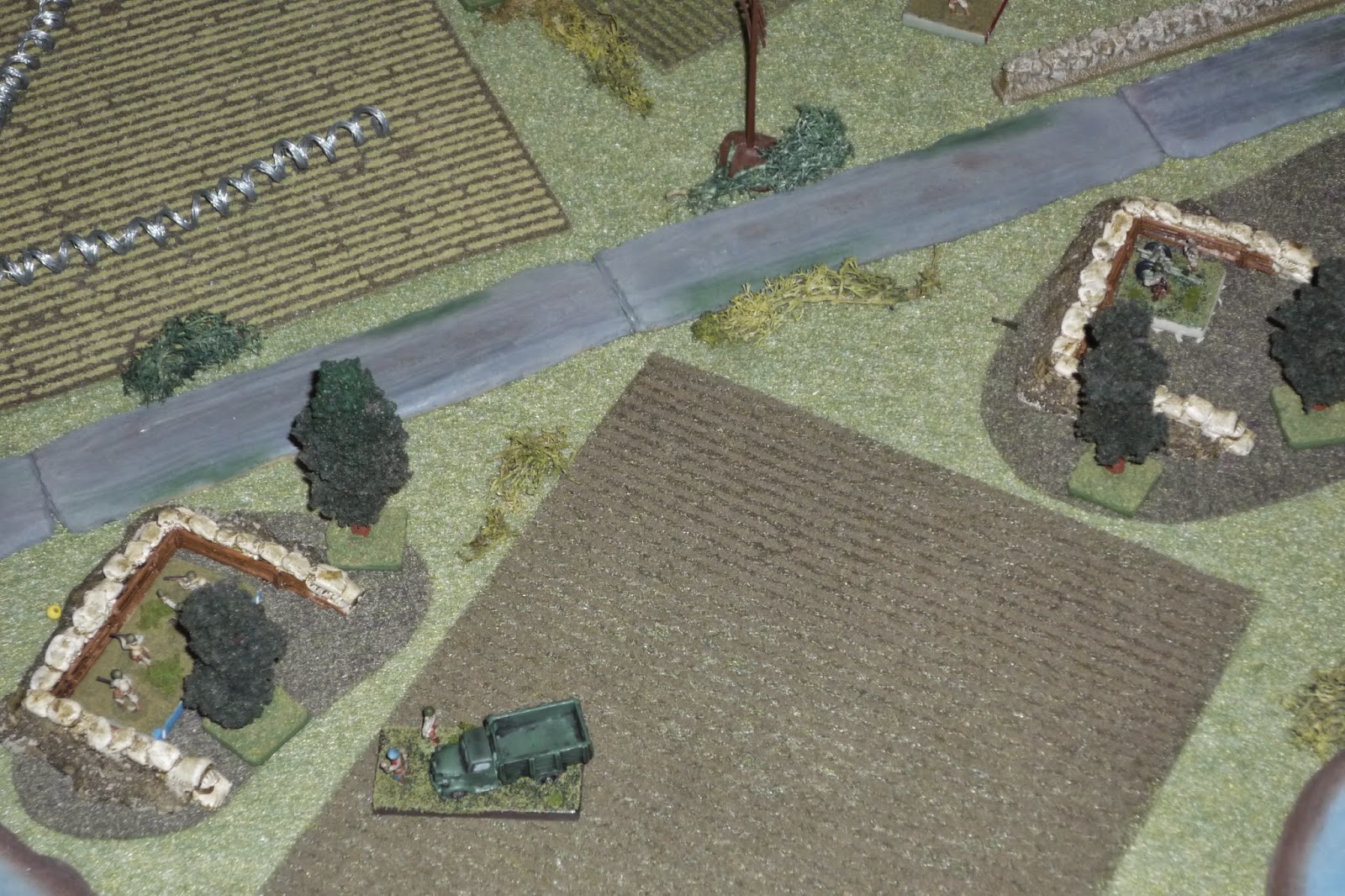 The Poles re-man their field gun (far right), while their CO moves to their rifle bunker opposite the German 1st Platoon (in southwest). 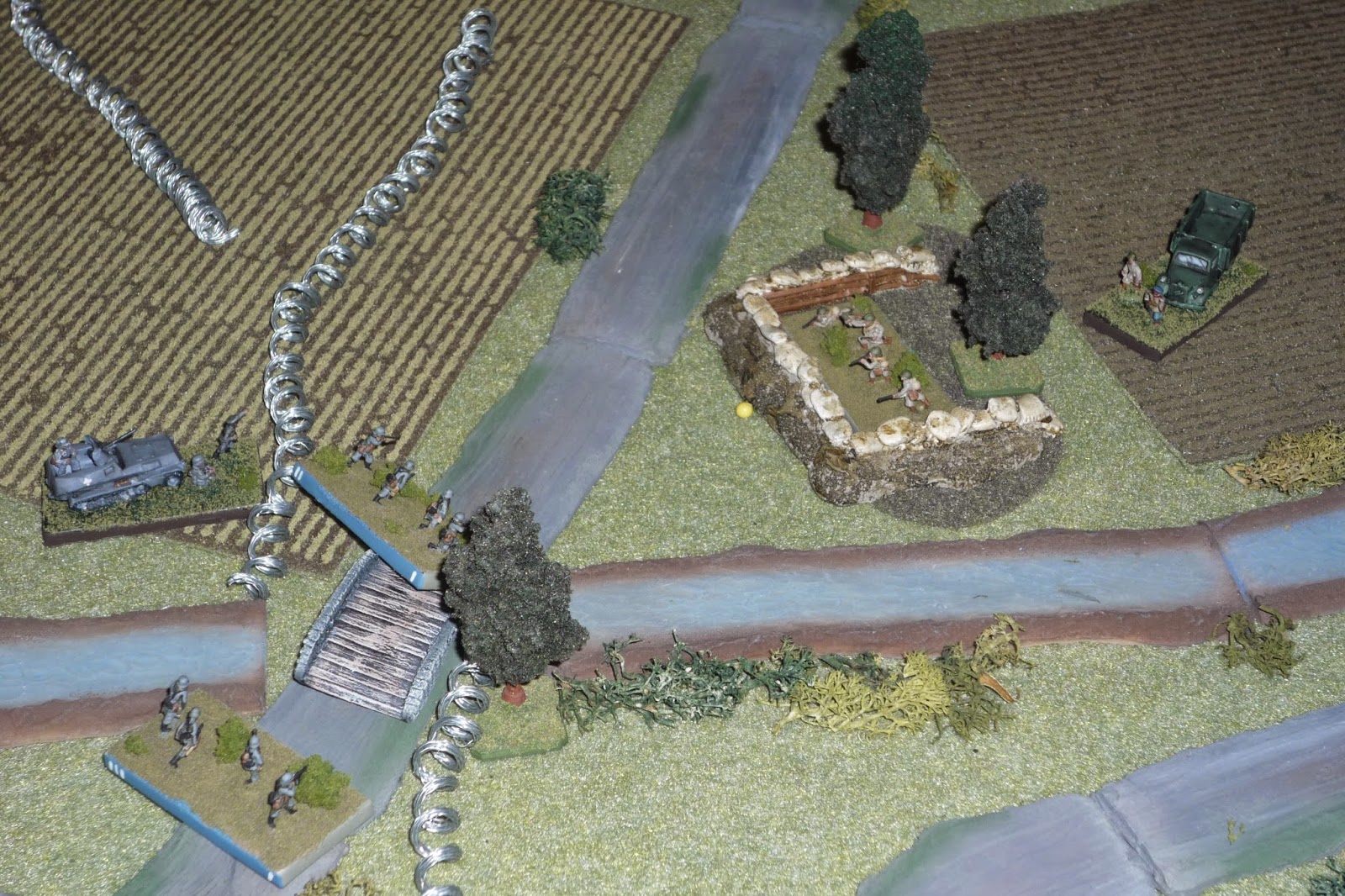 Now the Germans roll a scurry, let's see if we can get things moving.  Right off the bat, in the center (not pictured) Cpl Hackl tries to rally his squad, but fails and they also run off the map.  For those keeping track (and I certainly am), that's a Platoon Commander with his HQ section, two rifle squads, and an MG34 team that have run away screaming.  Colonel Klink, watching from a low ridge through his field glasses, vows something will be done about this, it will not happen again... 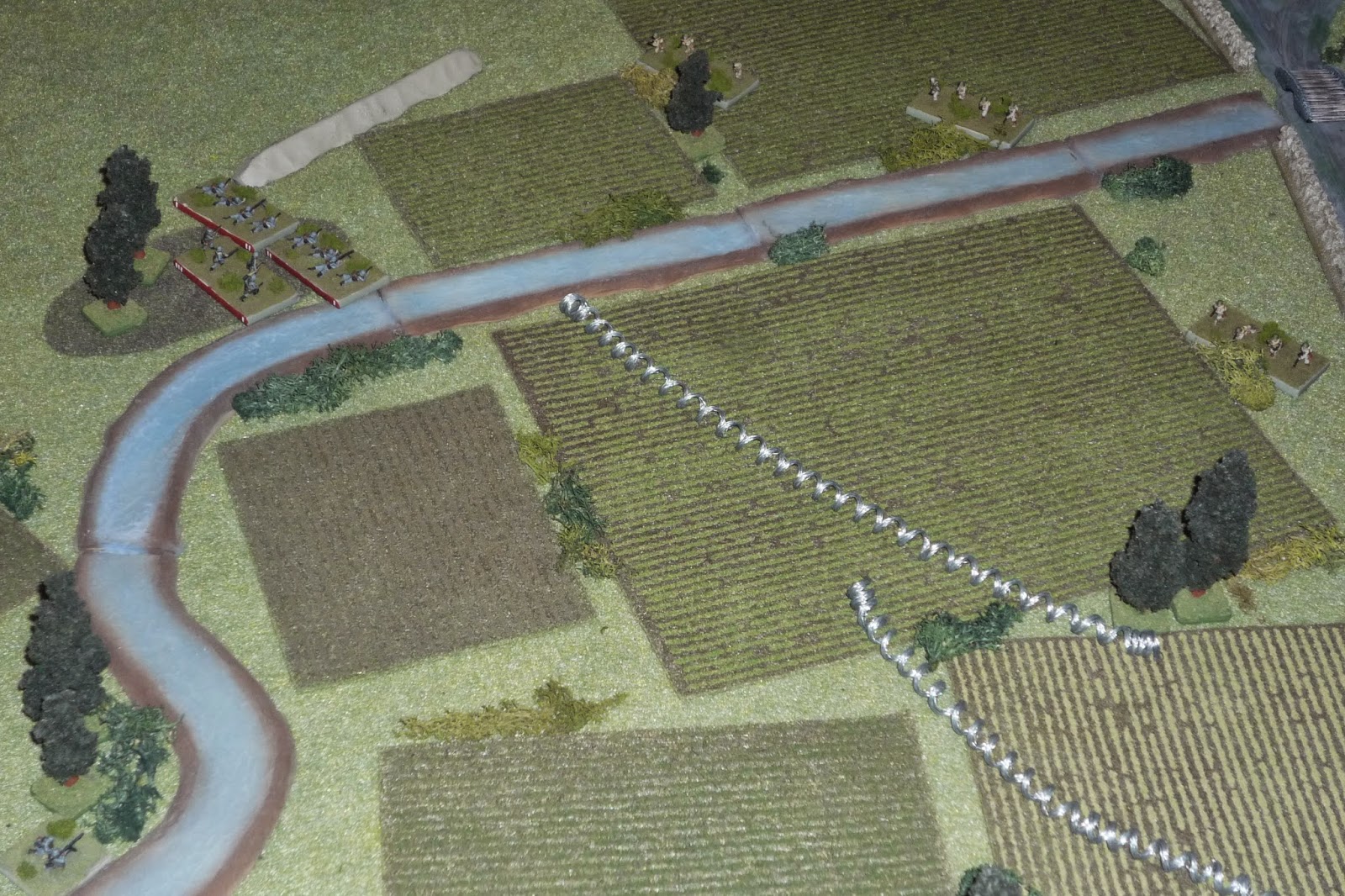 The Germans also move forward in the north, if for no other reason than to keep the four enemy rifle squads there pre-occupied. 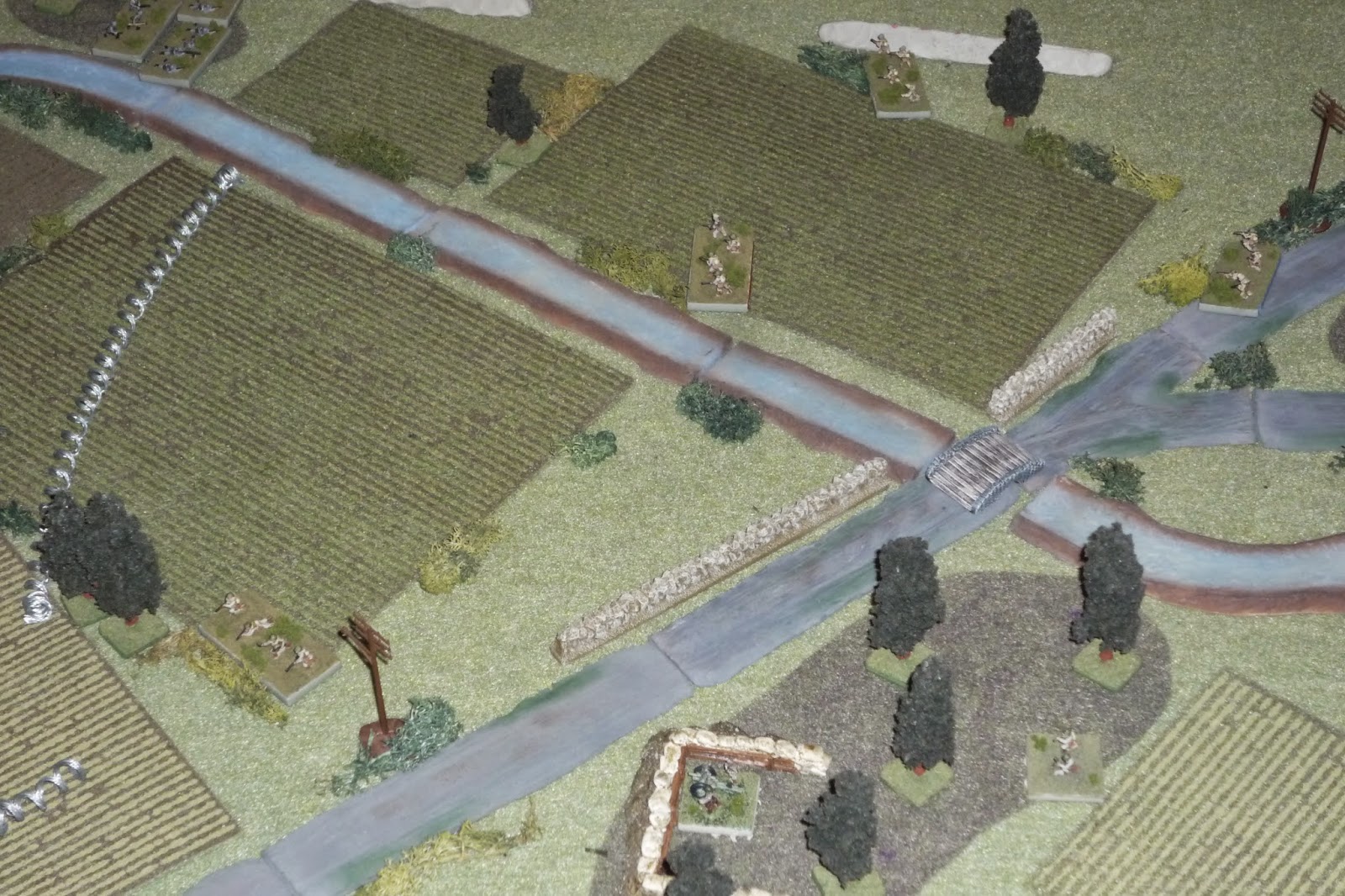 In the north, the Poles react by falling back, not wanting to allow themselves to be decisively engaged.  They's rather slow the Germans and allow their supporting weapons (MG, mortar, and Field Gun) to break the Germans. 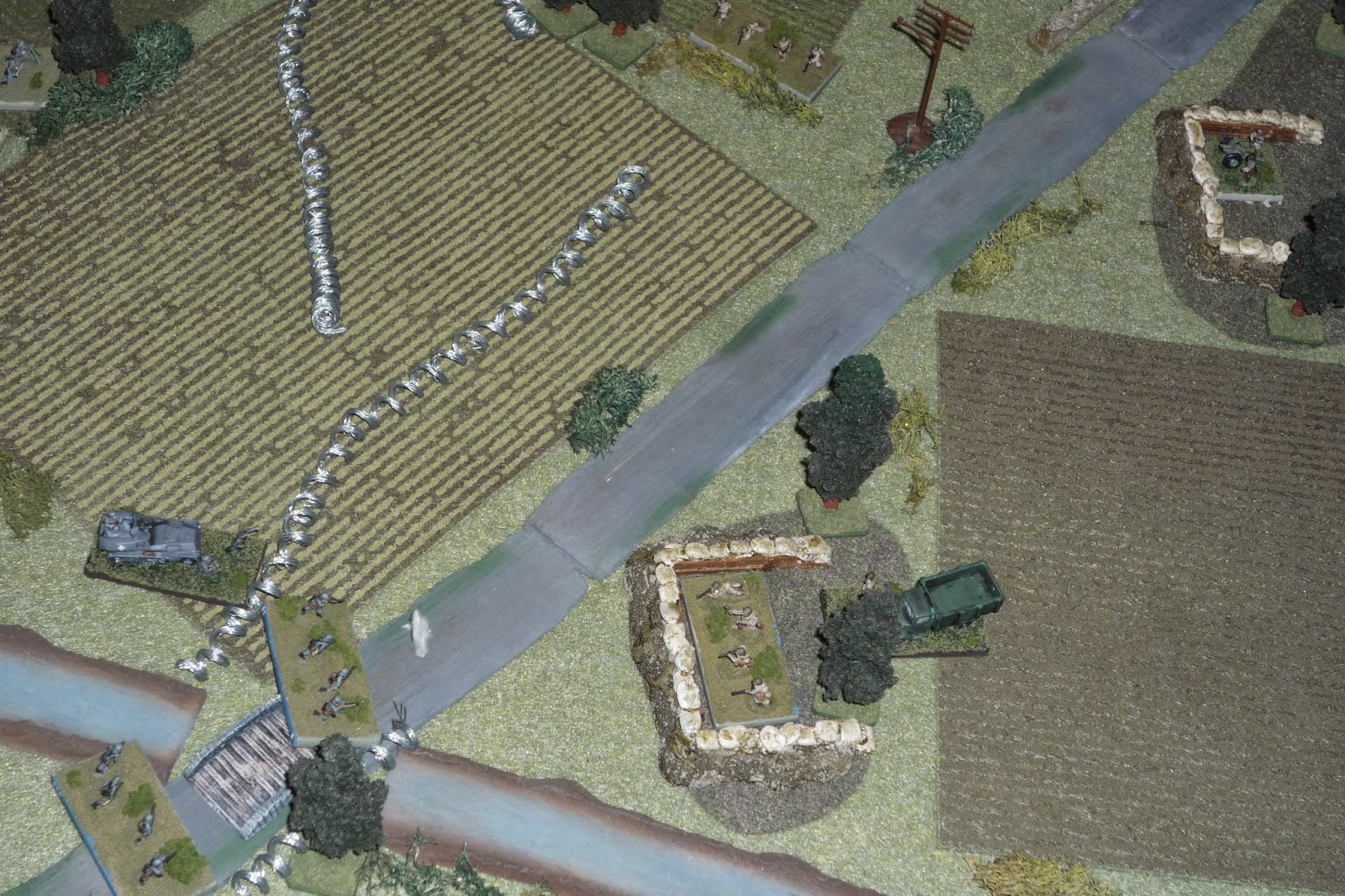 The Polish CO rallies the rifle bunker (bottom center), while the field gun (top right) fires at Sgt Haas' squad on the bridge, but the gallant Sergeant leads his men through the maelstrom unharmed and undaunted. 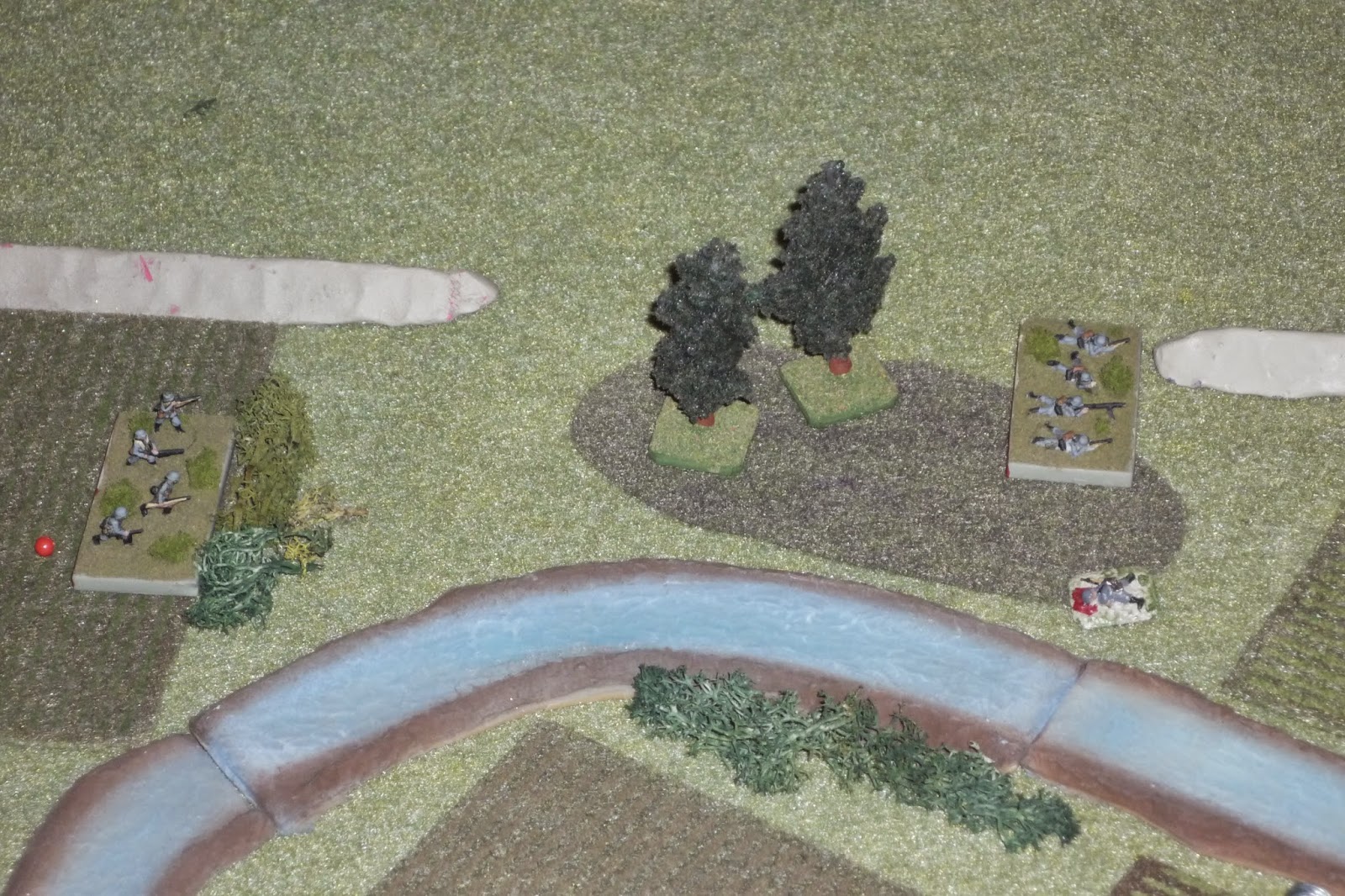 In the north, the enemy has ranged in and puts Sgt Hasselbach's squad out of the fight, and causing Cpl Obst's squad to fall back (far left).

The Germans roll up a random event, and this allows them to get the field gun back in action, and it's immediately put to good use. 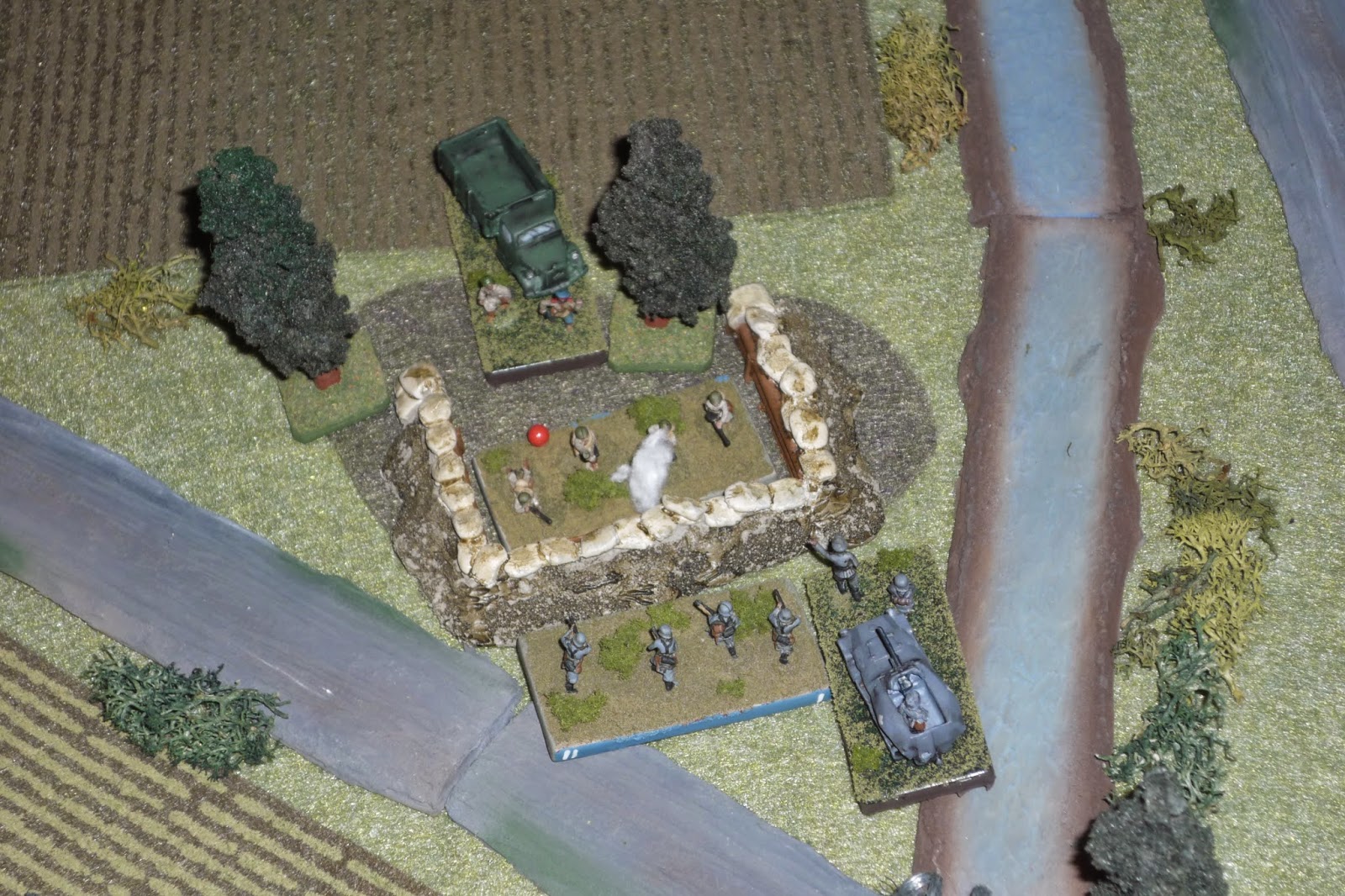 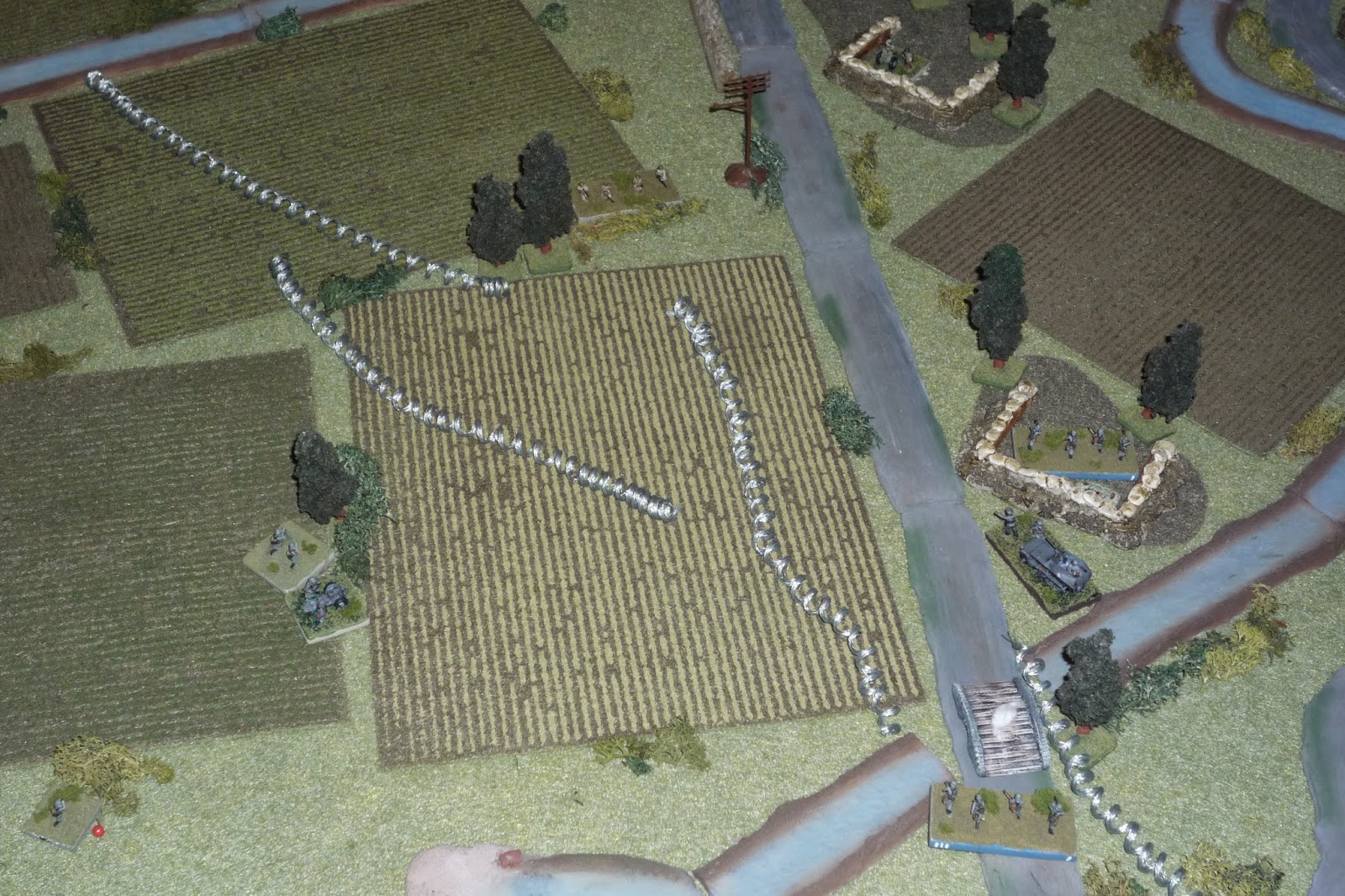 The enemy field gun (top center) again fires on the bridge, but again to no effect, though Cpl Nader's men are not happy for the attention.  The enemy 82mm mortar fires on the field gun and mortar; the mortar is unaffected, but once again Sgt Oberlander's crew abandons the gun (bottom left with red bead).

The Germans roll a scurry, and another random event.  A hero emerges, which I should have assigned randomly, but it only made sense to make it Sgt Haas (who has endured two mortar barrages, charged across the bridge under 76mm gun fire, then led a close assault victory) of 1st Platoon's 2nd Squad. 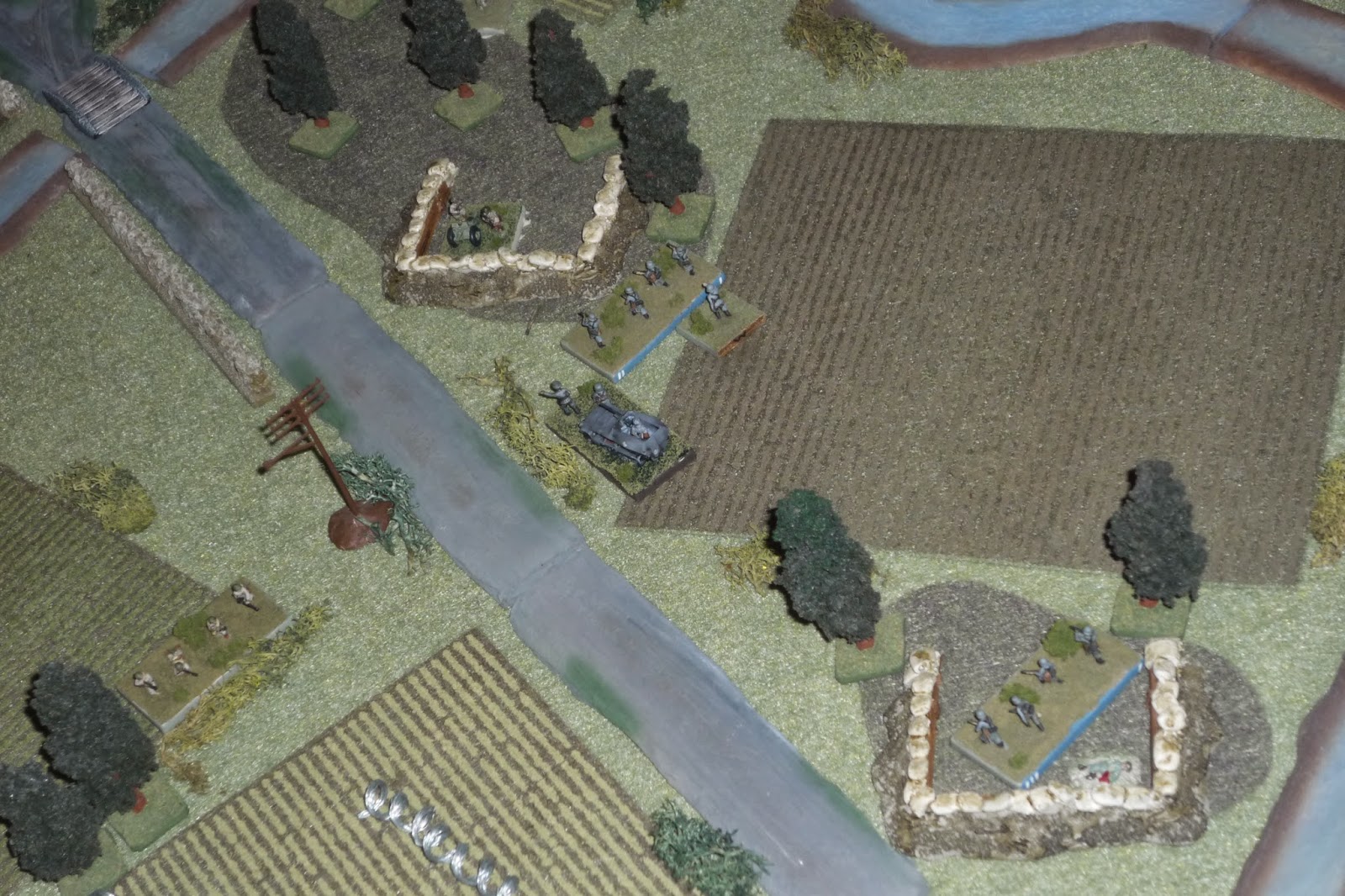 Off camera, the field gun crew returns to the gun, while the CO and Sgt Haas' squad move up to bunker #2 (holding the enemy field gun), with Cpl Nader's squad following them (bottom right in bunker #1).  The enemy MG bunker is off camera at top right, and so we're very lucky to get the 'scurry' as this allows us to move without drawing reaction fire.  However, one of the enemy rifle squads from the north comes down (across street from CO). 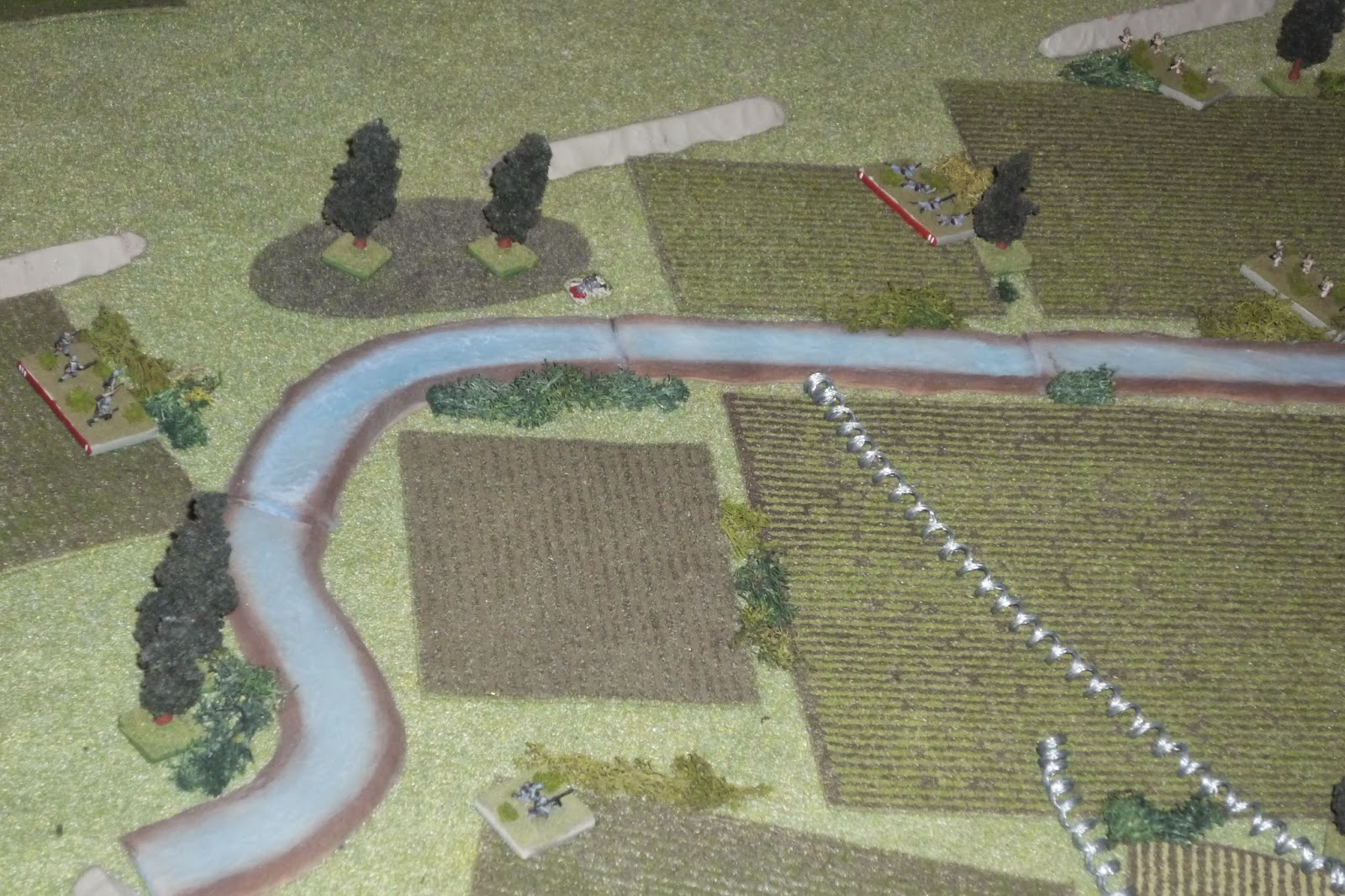 In the north, Sgt Aust's squad (top right, opposite two enemy squads) and Cpl Osswald's MG (bottom center) move up to keep the pressure on. 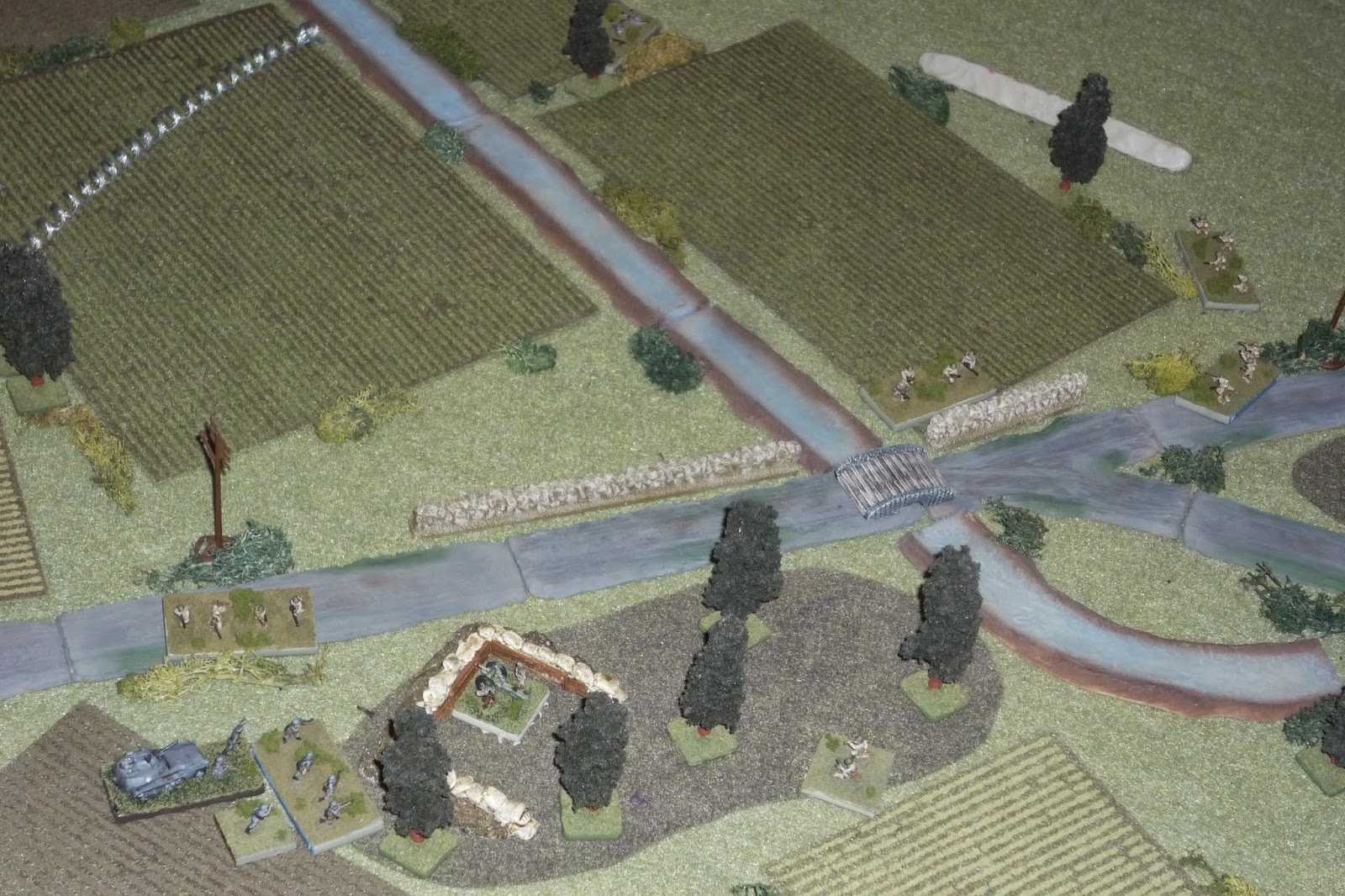 And the Poles in the north (top right) continue to fall back, trading space for time.

Then the Poles roll a firefight and a random event. 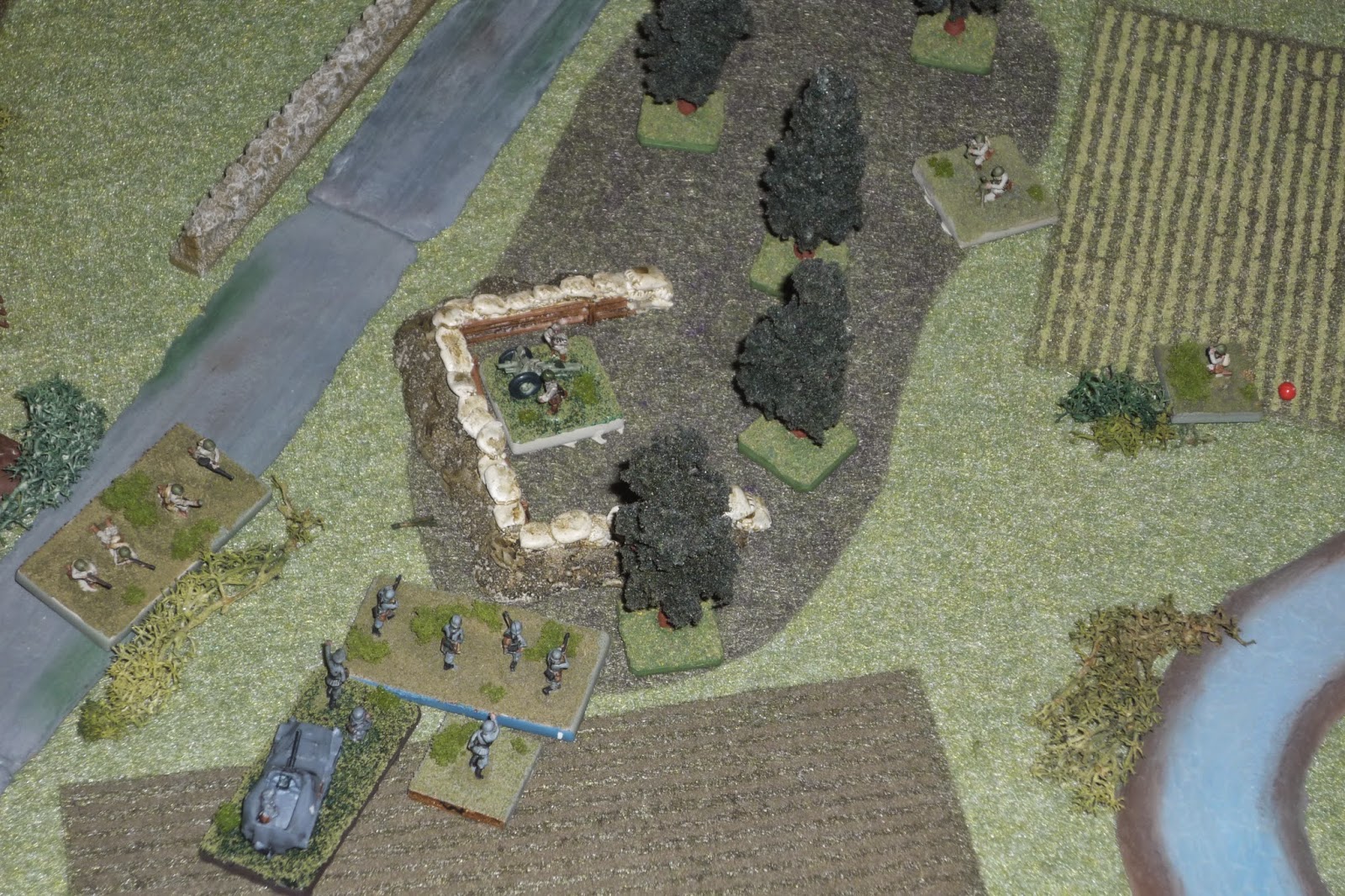 Which causes their field gun crew to run (far right). 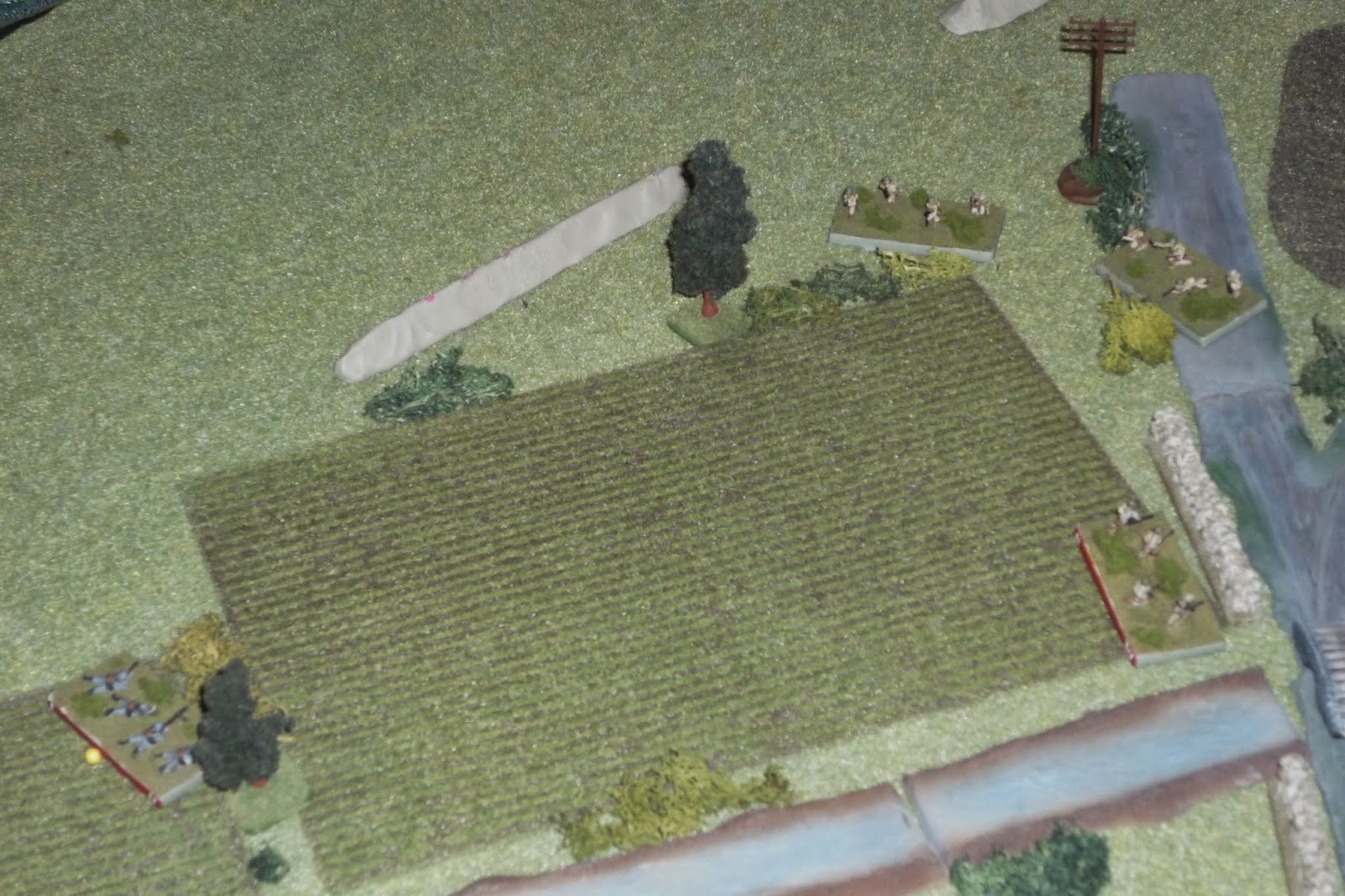 In the north, all three enemy squad fire on Sgt Aust's squad, first pining it, then putting it out of the fight... 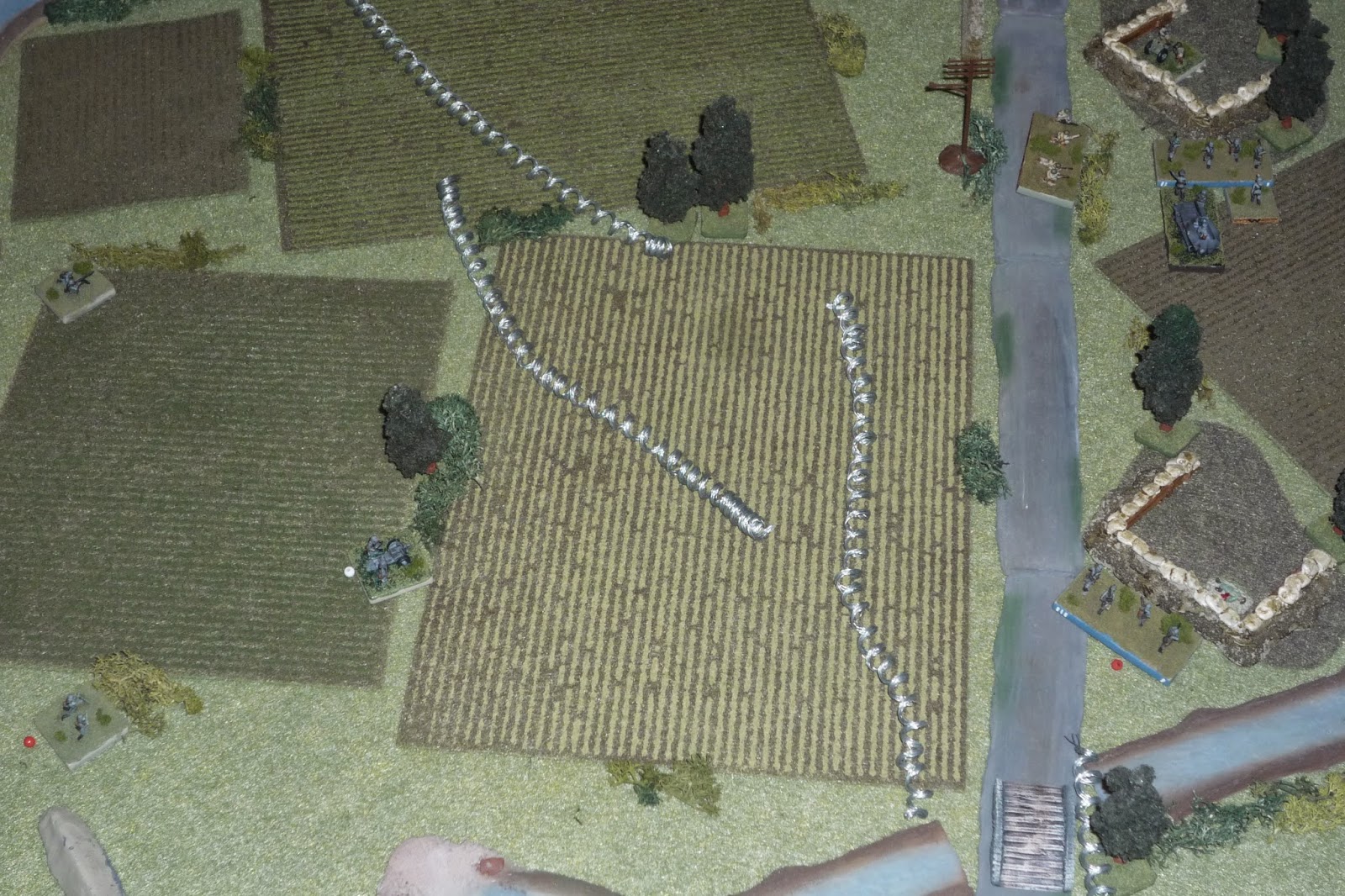 The enemy mortar again pounds the German central position, causing casualties for the field gun crew and forcing the mortar back (far left with red bead).  The enemy MG (off camera to right) fired at Cpl Nader's squad (far right, at bunker #1 with red bead), forcing them back, and the Polish rifle in the road (top right) fired at Sgt Haas' squad, to no effect!  Haas' men returned fire, but they didn't hit anything either... 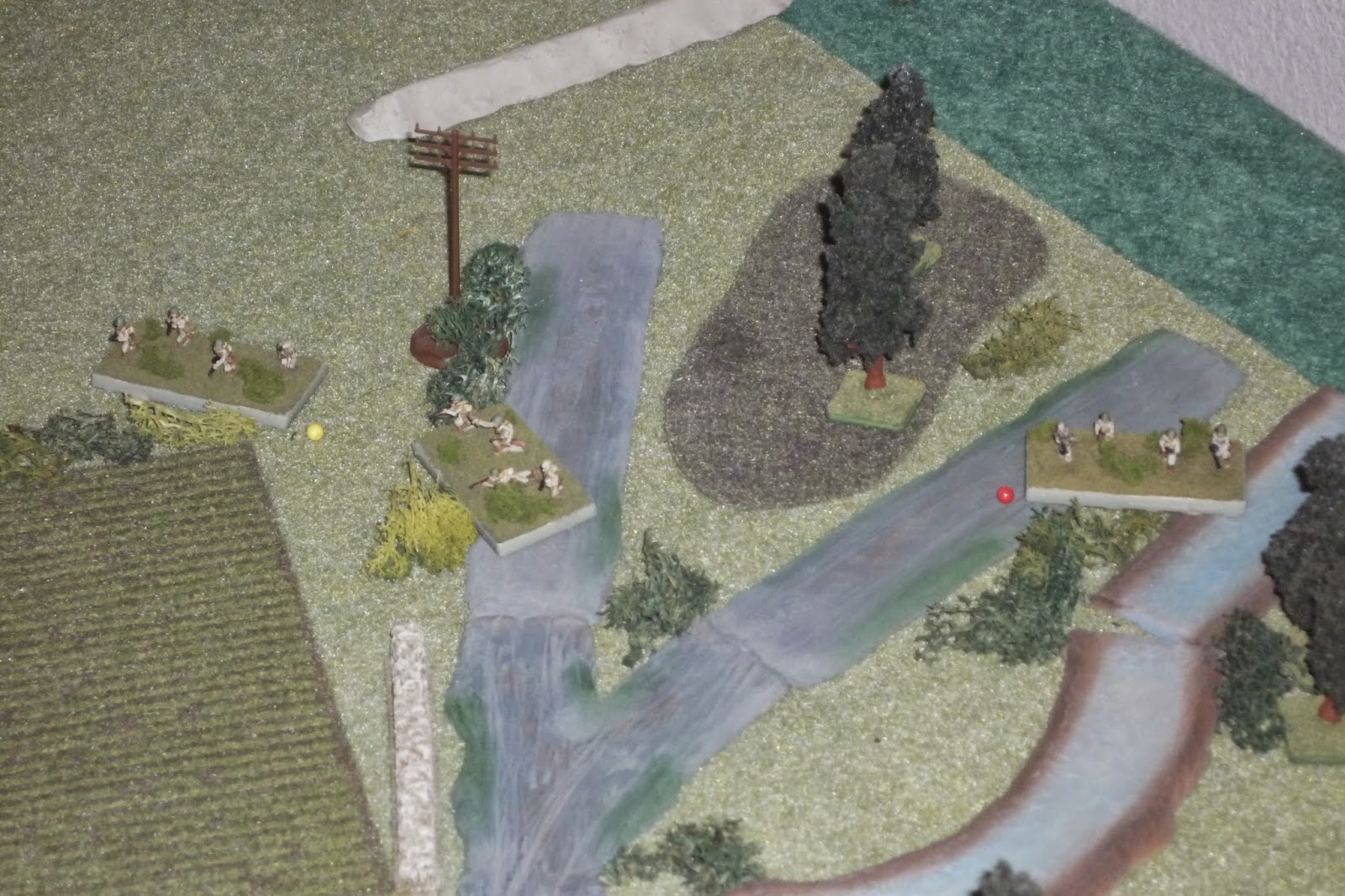 Cpl Osswald finally got his MG34 into position in the north (off camera at bottom left), and opened up on the enemy platoon there, pinning one and forcing one to fall back. 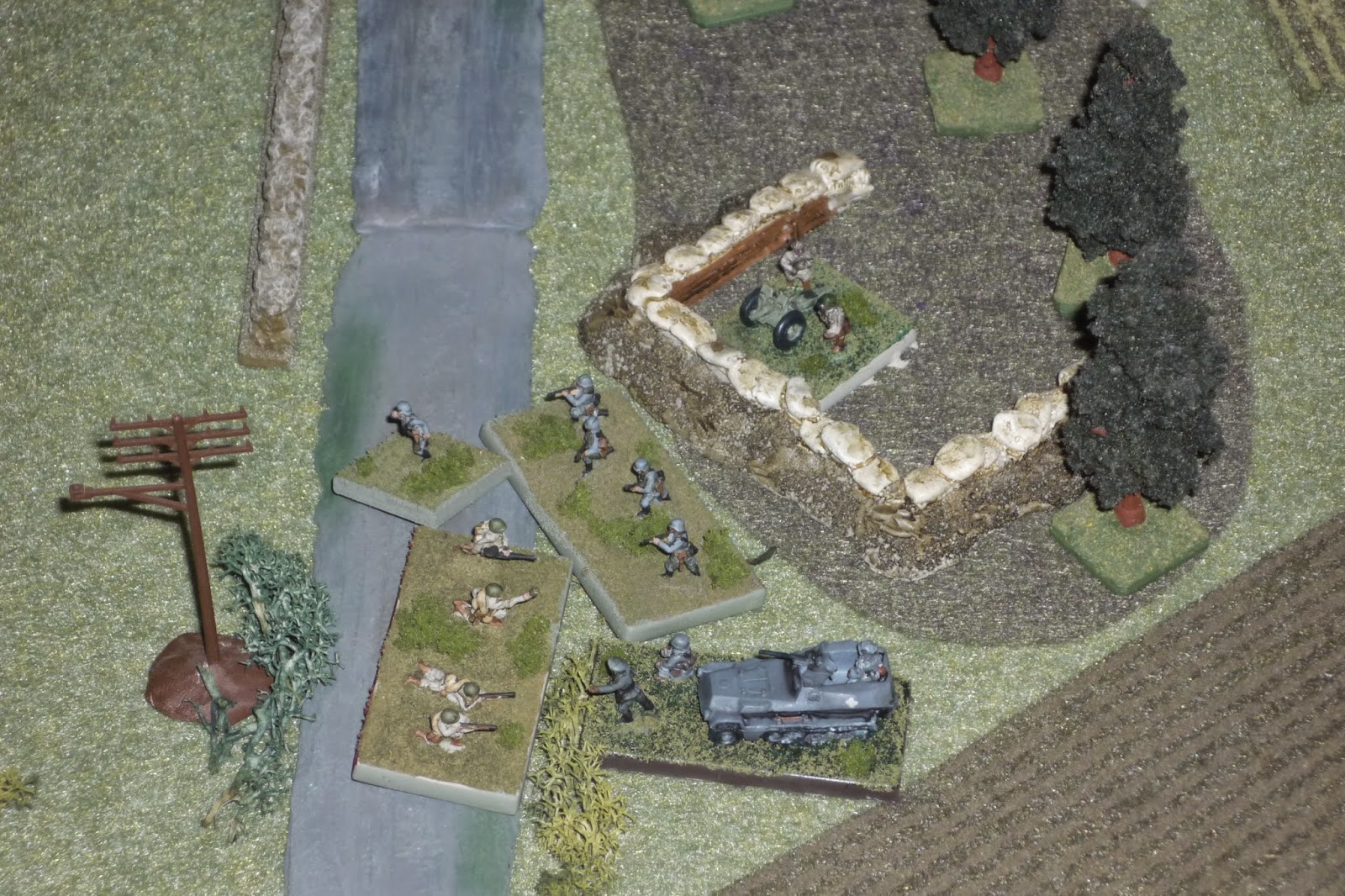 Lt Freitag and Sgt Haas then face about and charge the Polish rifle squad at bunker #2 (I apologize, the field gun in bunker #2 should have a puff of white smoke on it to denote the crew left).  Once again the CO and squad subdue the enemy in close combat. 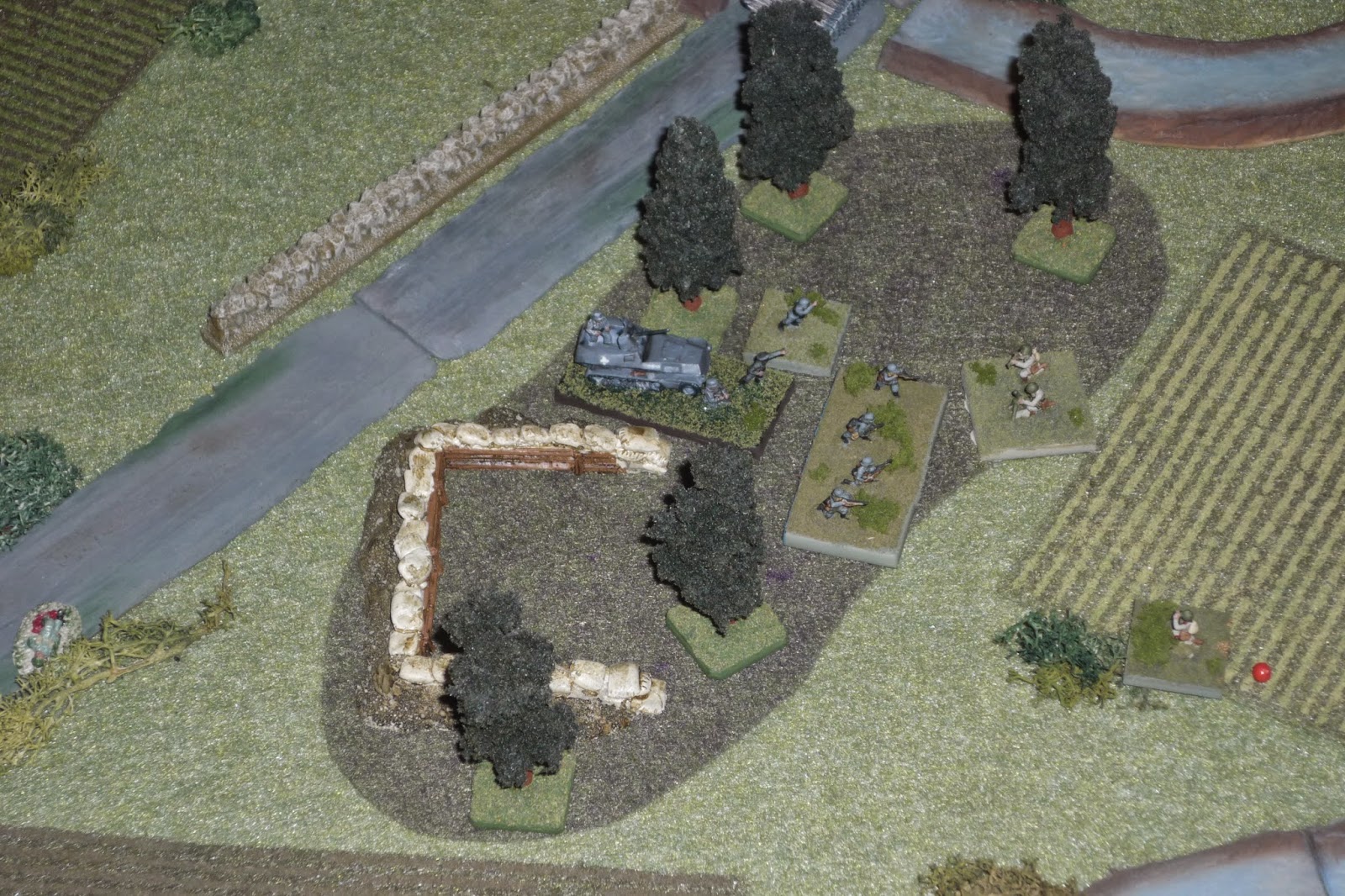 They move into bunker #2 and capture the field gun and mortar crews with their follow-on action. 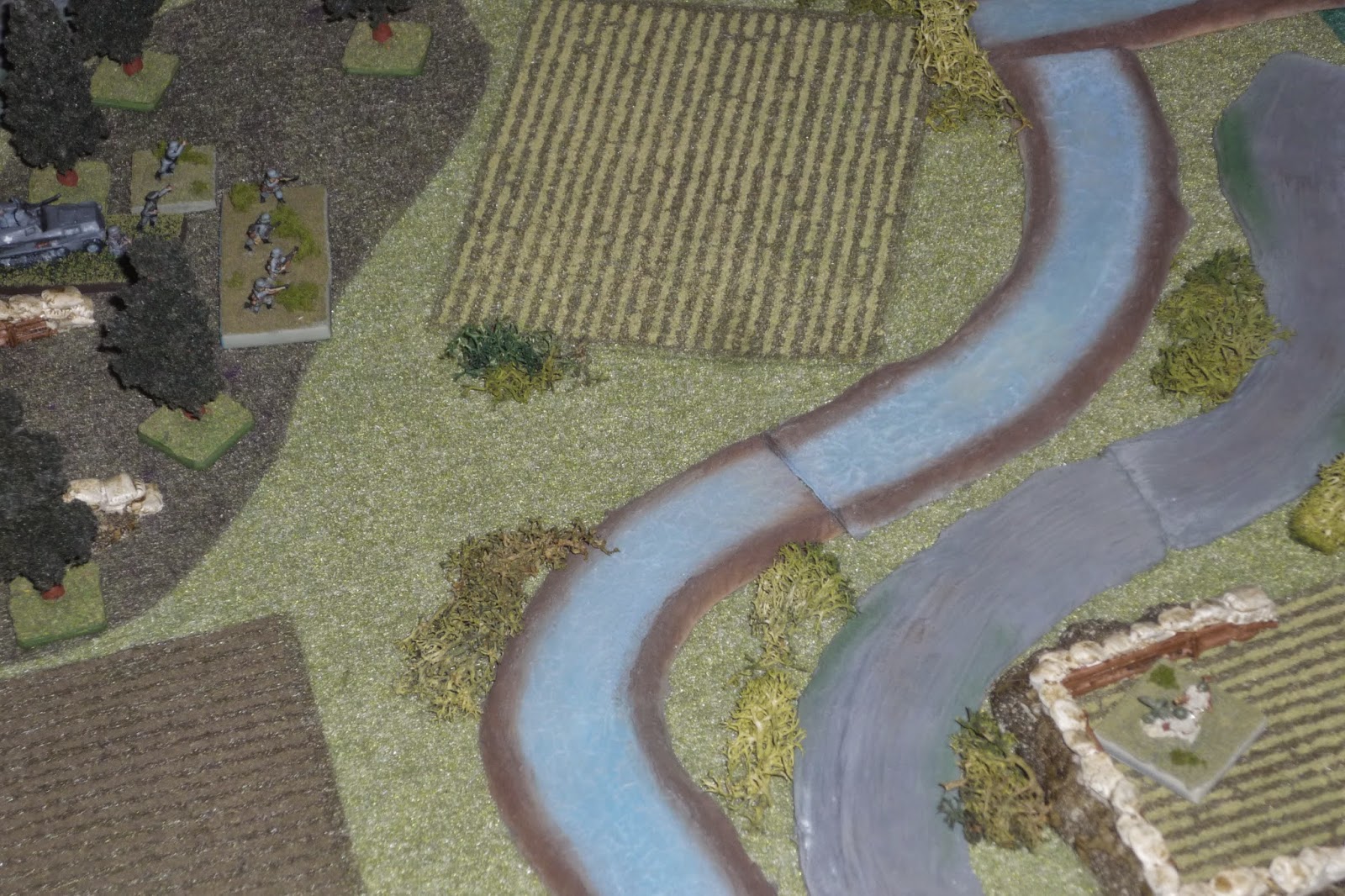 With the Germans now in bunker #2 (top left), the enemy MG in bunker #3 has to re-position itself to get a proper field of fire.  At this point, the machine gun team leader realizes 1) there's only his team and two rifle squads left (in the north, one of them failed to rally and ran away), and 2) he's the senior man.  With that in mind, he fired off the signal flare ordering all remaining forces to fall back.

Colonel Klink, from his observation post, let a broad smile cross his extraordinarily handsome face.  "You see Schultz, we are on our way!  Have our reconnaissance elements lead the way east!"  "Jawholl, mein Colonel.  What about the..."  "What, Schultz?  Come on man, what is it?"  "The, uh, the 'stragglers,' Sir?"  "What?  Stragglers?  Ah, yes Schultz, I catch your meaning.  Who was the first to desert the field?"  "2nd Lieutenant, mein Colonel."  "Damn, an officer?  What are they teaching these youngsters these days?  Very well, have him shot."

Well, it was a hell of a fight and was iffy right up to the end.  I've played a boatload of games already, just need to take an 'operational pause' to get them written up.  But I'd rather keep playing.  Next fight is the early recon efforts on the north side of Mokra; spoiler alert: the KG did better than its real-life counterparts, but the fights following it get pretty damned ugly...  Stay tuned, more to come.