Following the Brigade's initiative to relocate various smaller villages into fewer large ones, it opened up the opportunities for the use of greater firepower, particularly to the west, nearer the Cambodian border where the NVA frequented.  Due to this, the Brigade stepped up its use of B-52 'Arc Light' strikes.  As these occurred, frequently a patrol would be sent out to conduct a "Bomb Damage Assessment," that is, patrol up the length of the airstrike in an attempt to ascertain if the enemy suffered any casualties.  The vast majority of the time nothing was found, just a massive string of 500-pound bombs ripping the jungle open.  But every once in awhile...

It's 22 November 1967, and the squad is on patrol near the Cambodian border, conducting a BDA for an Arc Light that occurred earlier this morning. 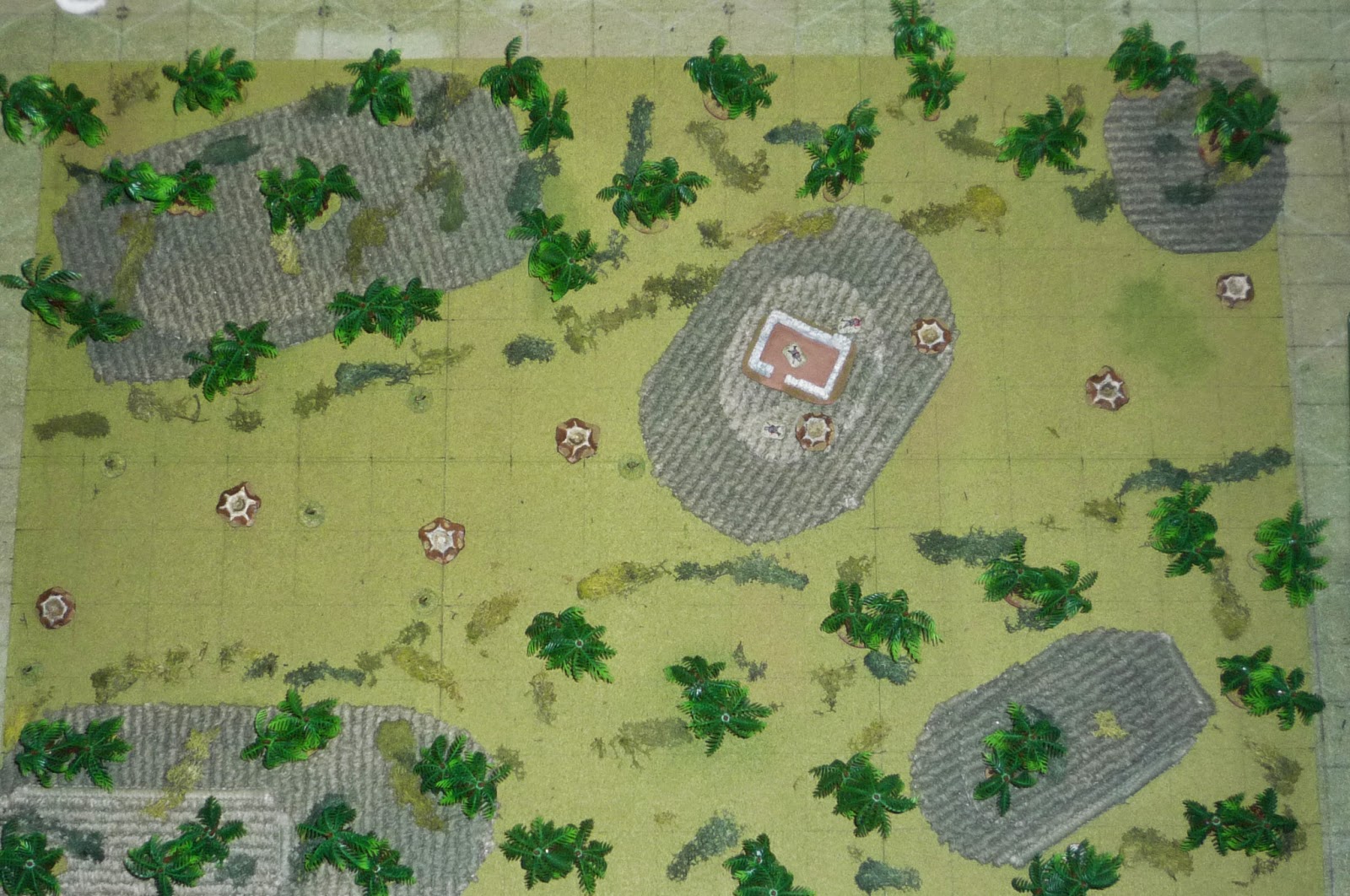 Overview of board, right is North.  The squad entered from the left (South), the NVA from the North.  It's dense, trackless jungle on each side of the Arc Light strike, with bomb craters running from south to north.  Interestingly, a small, bombed out structure is noted atop a knoll up ahead. 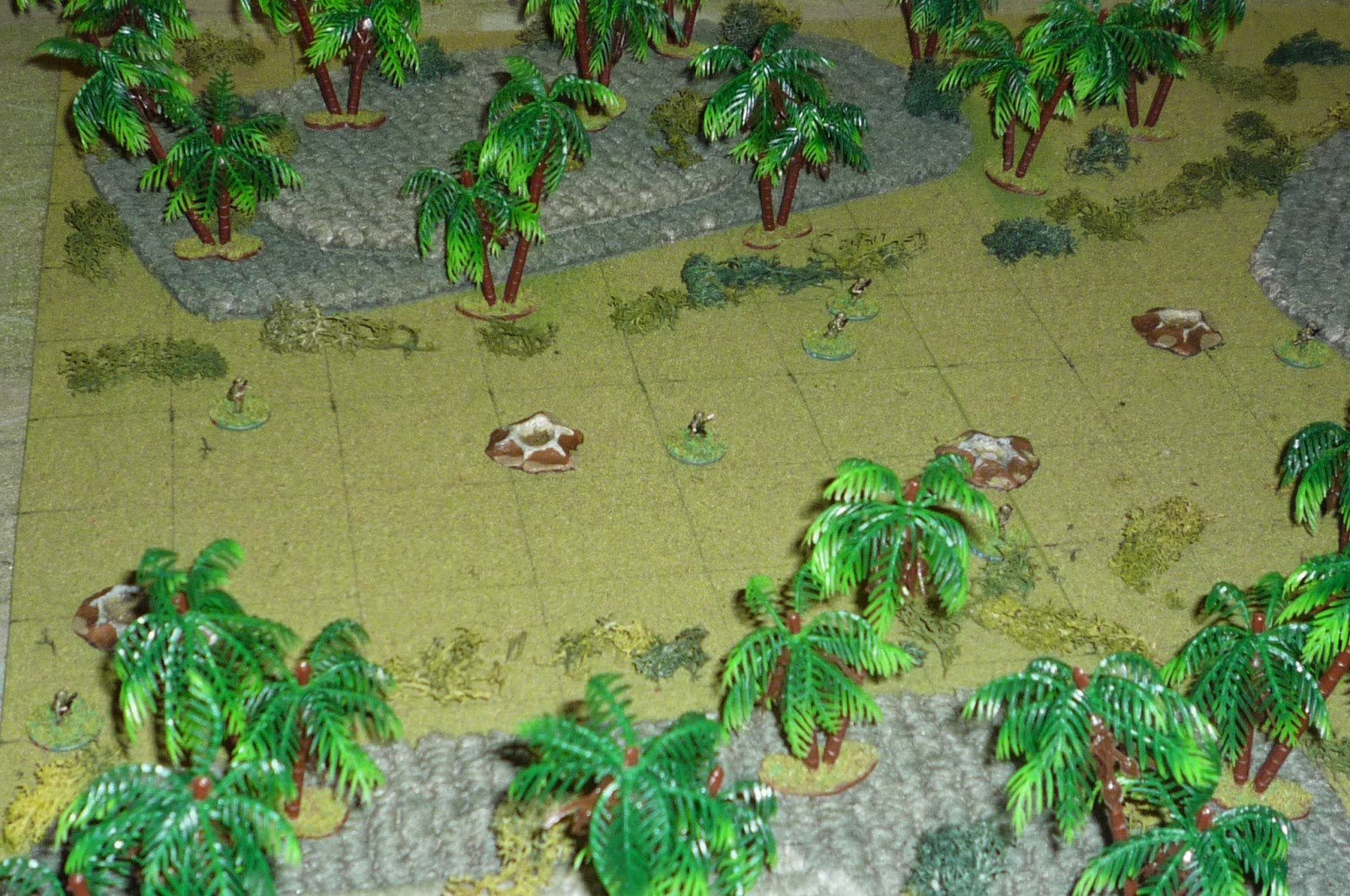 The squad, down to seven warm bodies, from right to left: Swan on point, followed by Stallworth (M-60), Bradley (with his brand new PFC stripes, courtesy of running last fight), Thomas (M-79), Sgt Banaszak, Ham (M-79), and Kolb bringing up the rear again. 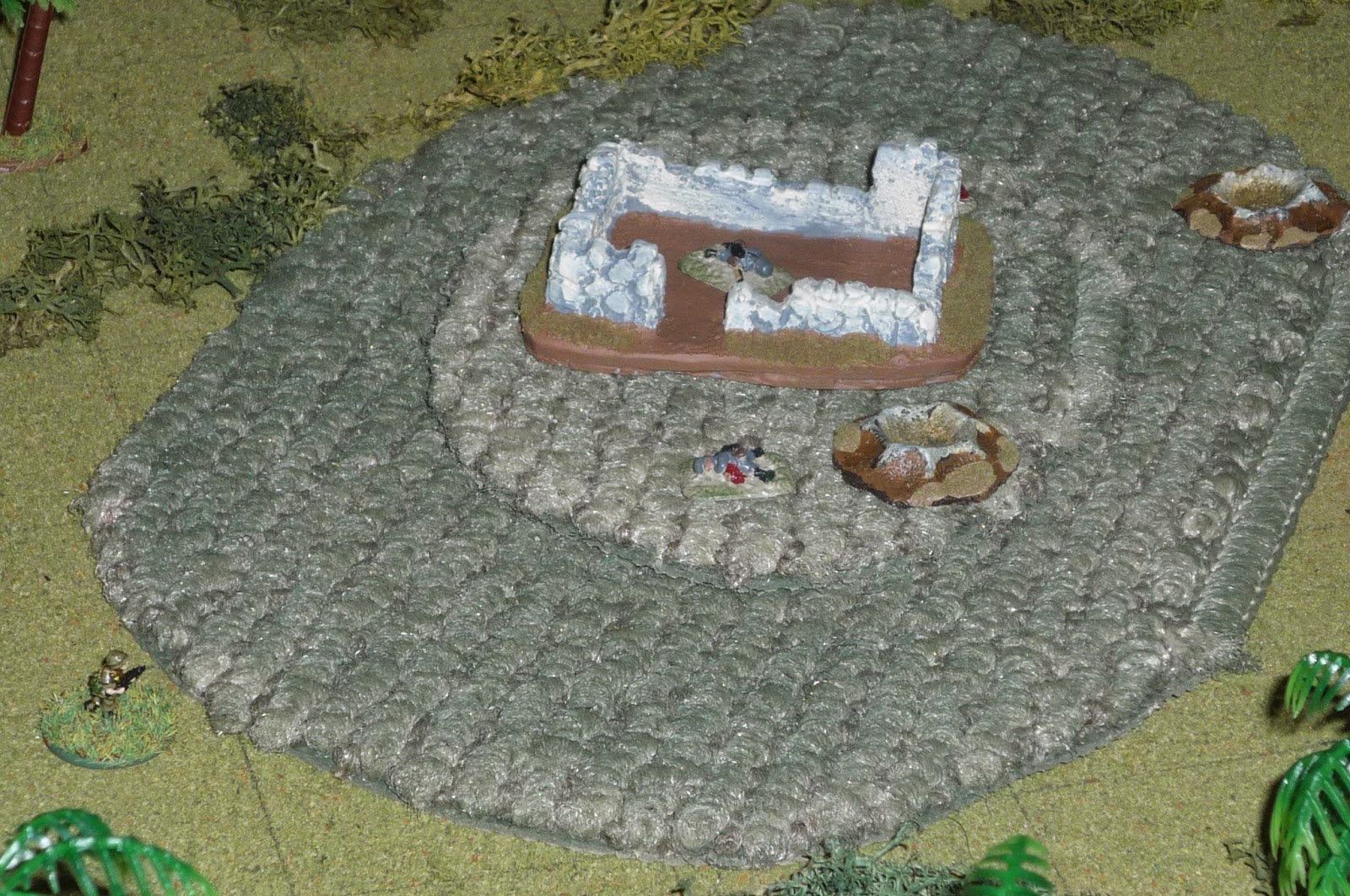 Swan (bottom left): "Holy Crap, Sarge, take a look at this!  We've been on how many of these, ain't seen a damned thing!  Check it out, looks like the flyboys finally hit something!"  Banaszak: "Yeah, looks like a comm site, got fresh bodies and everything." 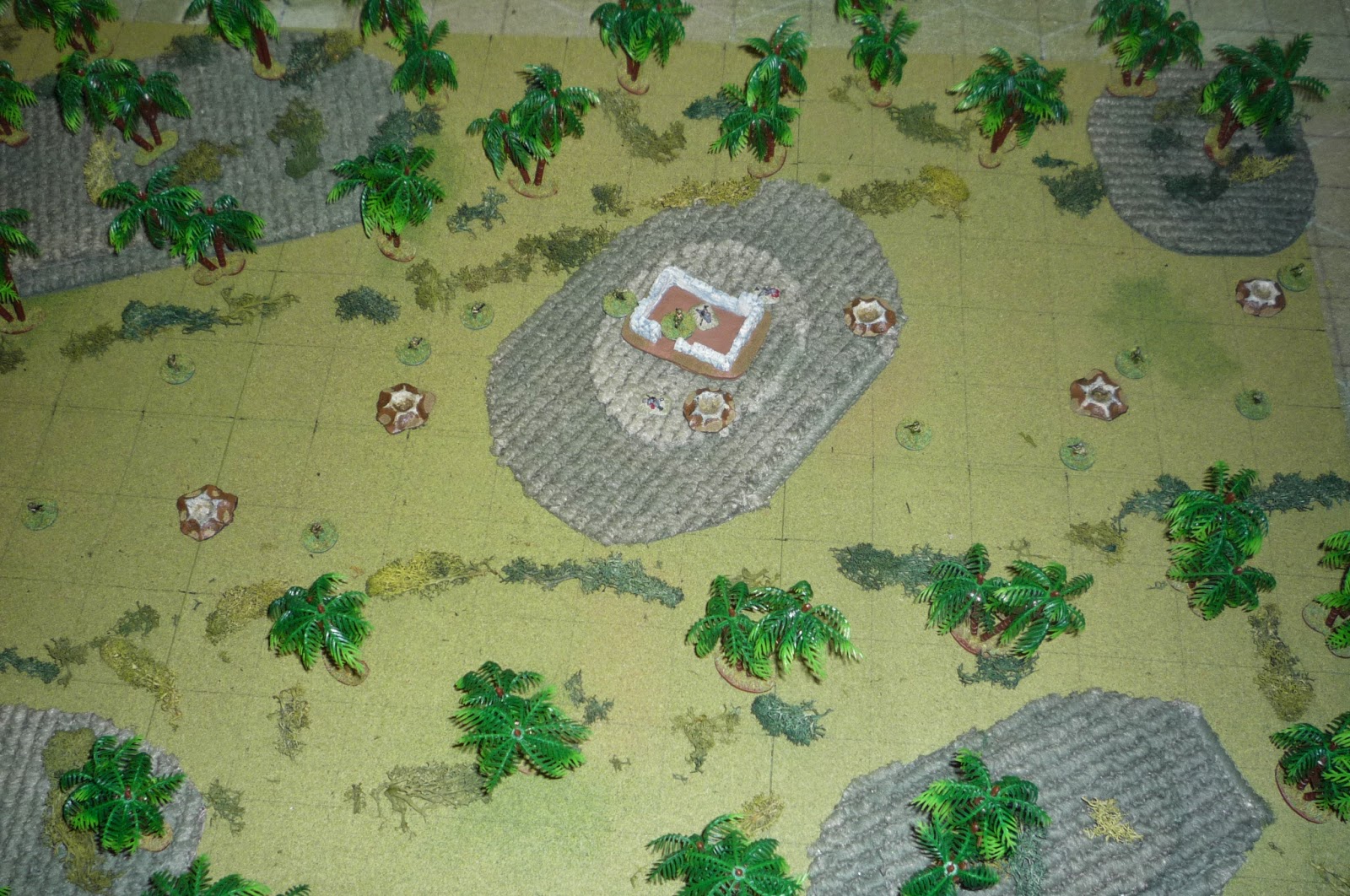 Swan and Banaszak move up to the comm site.  Banaszak: "Hell, I imagine when they figure out this thing ain't transmitting anymore they'll be sending someone up to check it out.  What was that?"  Please take a look to the right of the comm site. 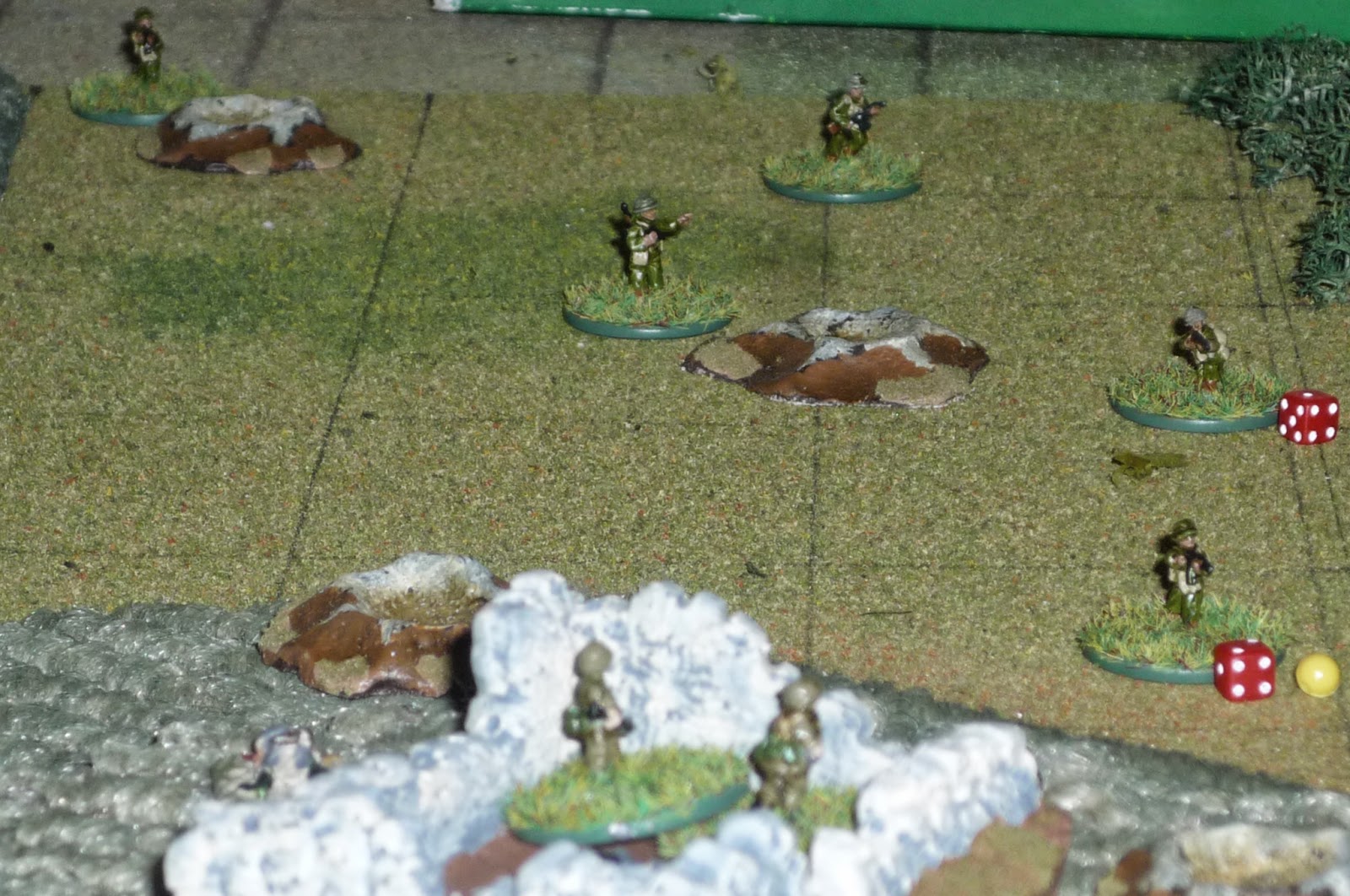 Swan (bottom center) moves over, and spots five NVA moving down the Arc Light track.  "Damn, they really should be busting brush, not walking down the damn highway."  Banaszak whispered back, "Yeah, they're lazy just like us," then cut loose, lightly wounding the NVA pointman (bottom right). 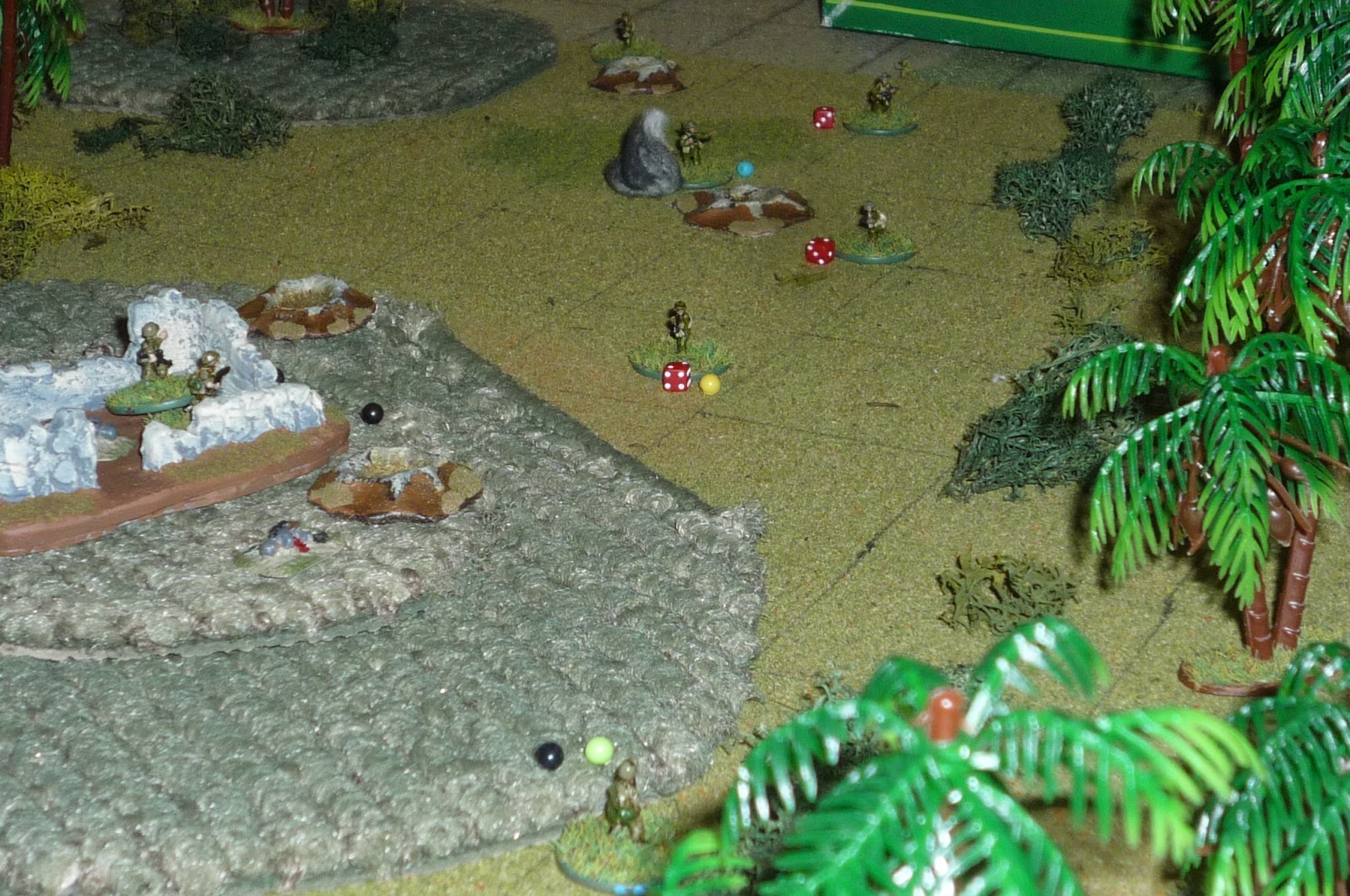 Thomas sprints to the right of the comm site (bottom center), flops prone, and pops an M-79 grenade at the NVA leader (blue bead and cotton at top center), lightly wounding him. 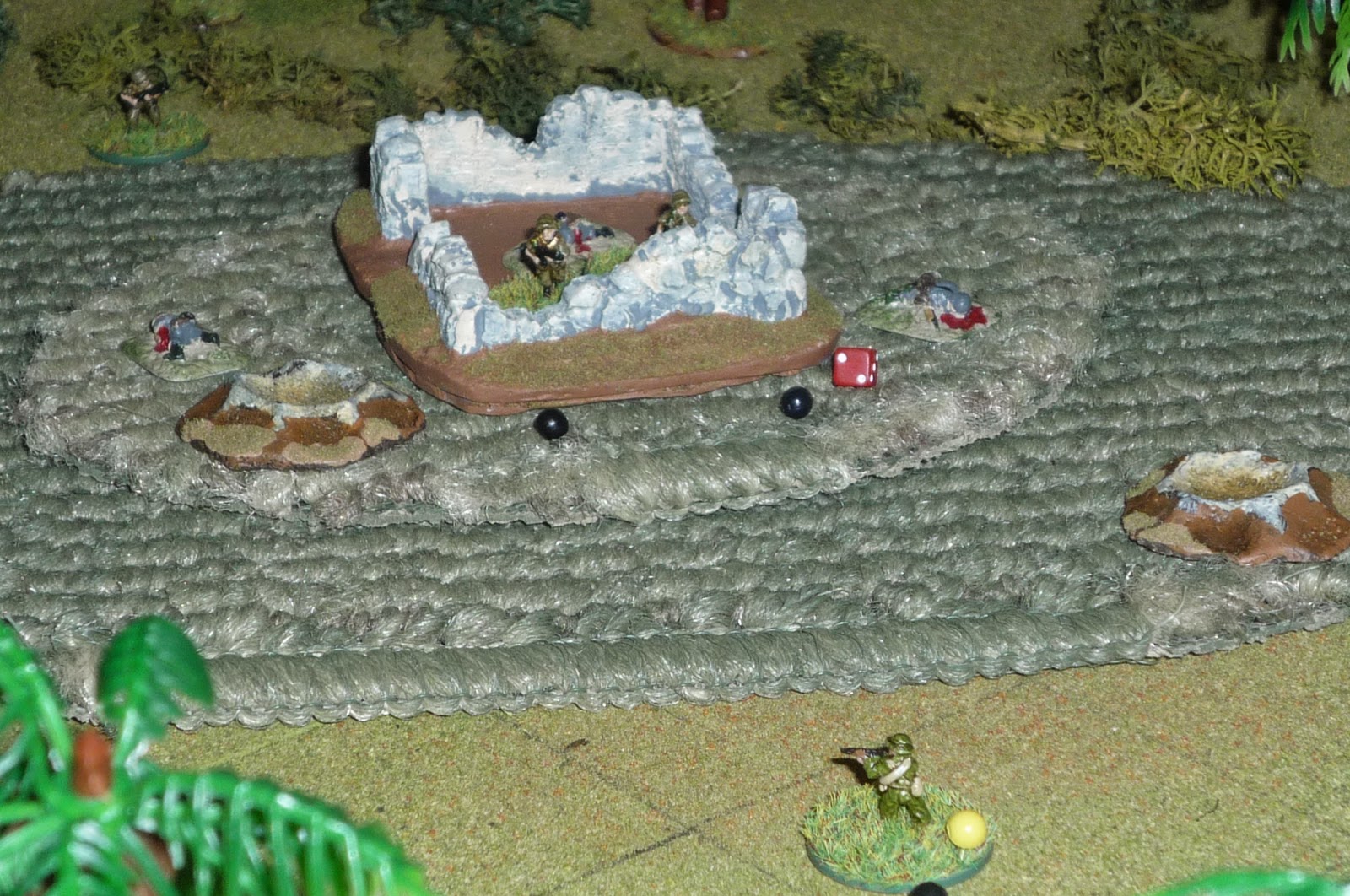 The enemy point man (bottom center) goes prone and fires at Banaszak and Swan in the comm site, missing. 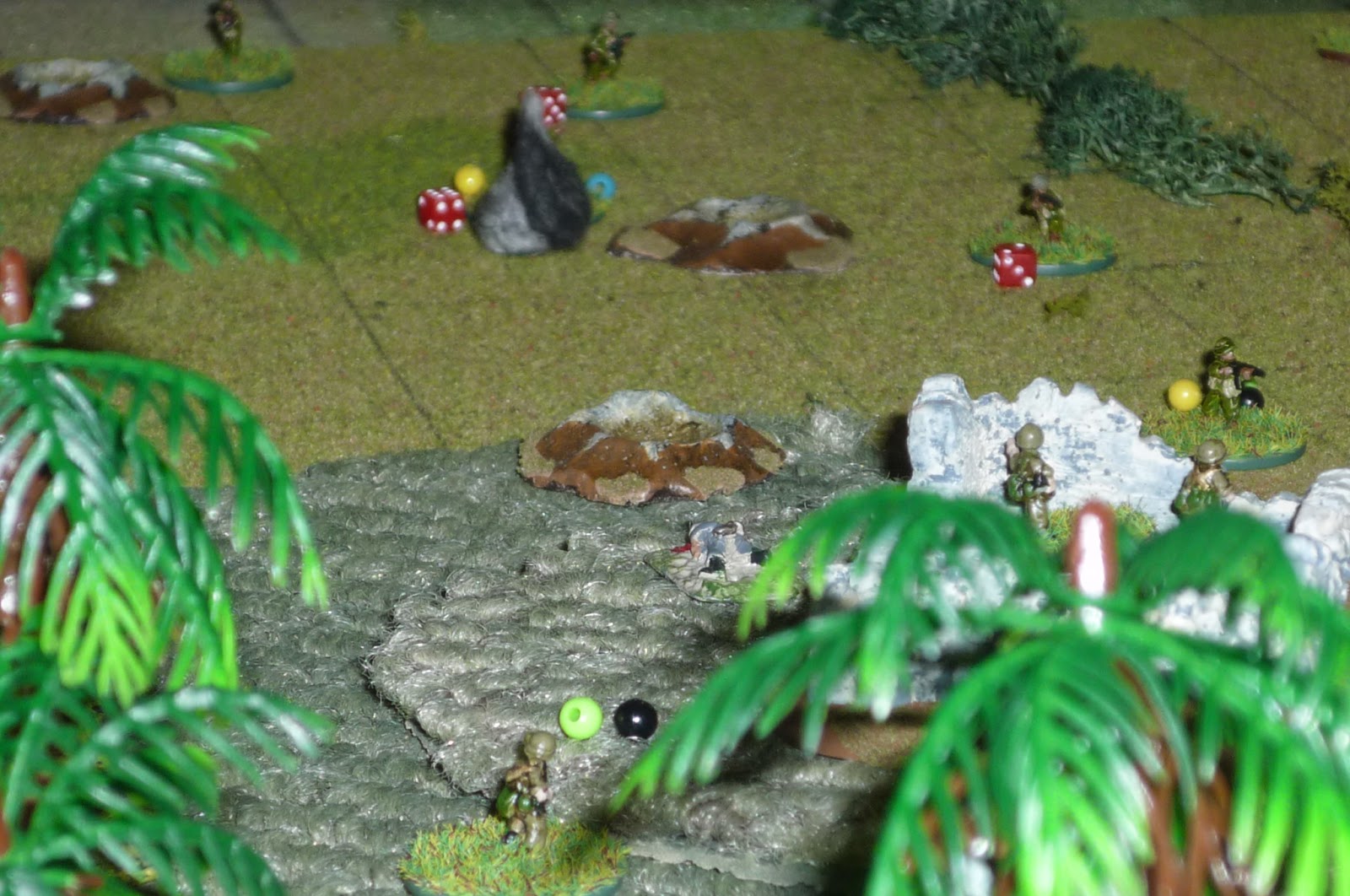 While Stallworth (bottom center) sprints left of the comm site (far right you can see Banaszak and Swan, with NVA pointman just above them), goes prone, and gets the Pig in action, hitting... nothing. 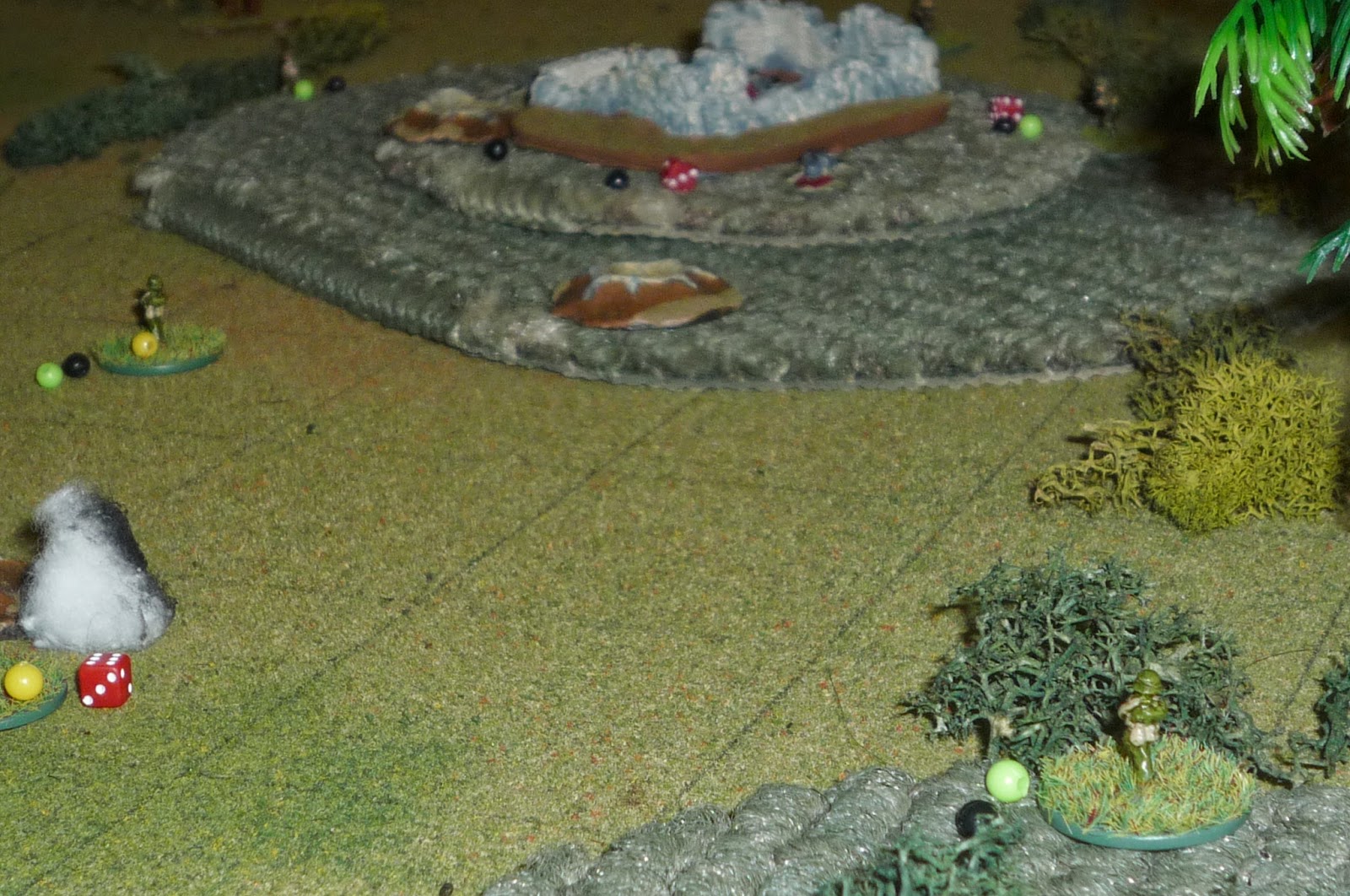 NVA Tail-End Charlie (bottom right) sprints right into the bush, goes prone, and takes a shot at Stallworth (top right), missing.  Looking at top, you have Thomas on left, Ban and Swan in comm site at center, and Stallworth at right.  The puff from Thomas' M-79 round is at bottom left on the NVA leader, with the NVA pointman just above that. 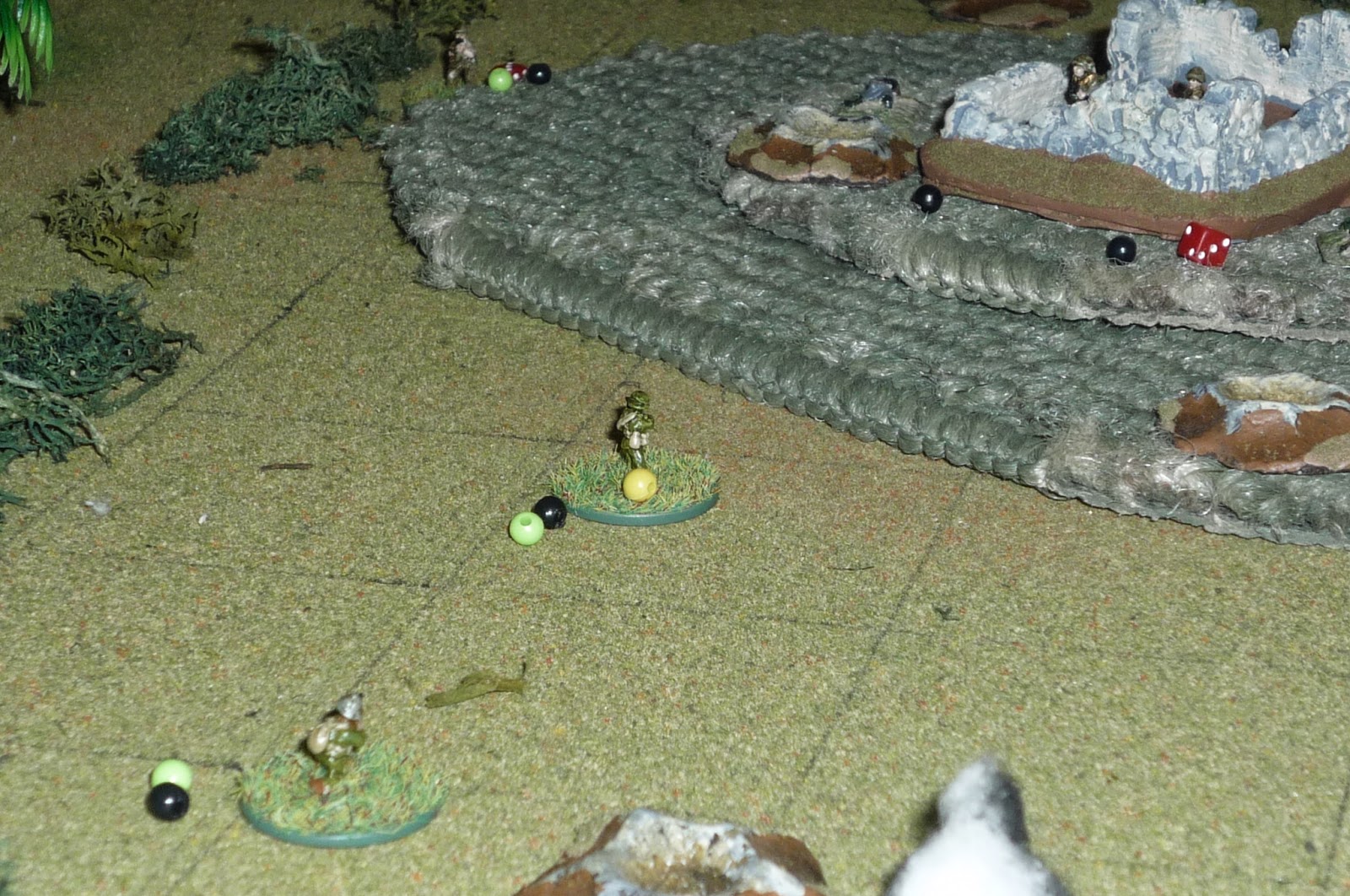 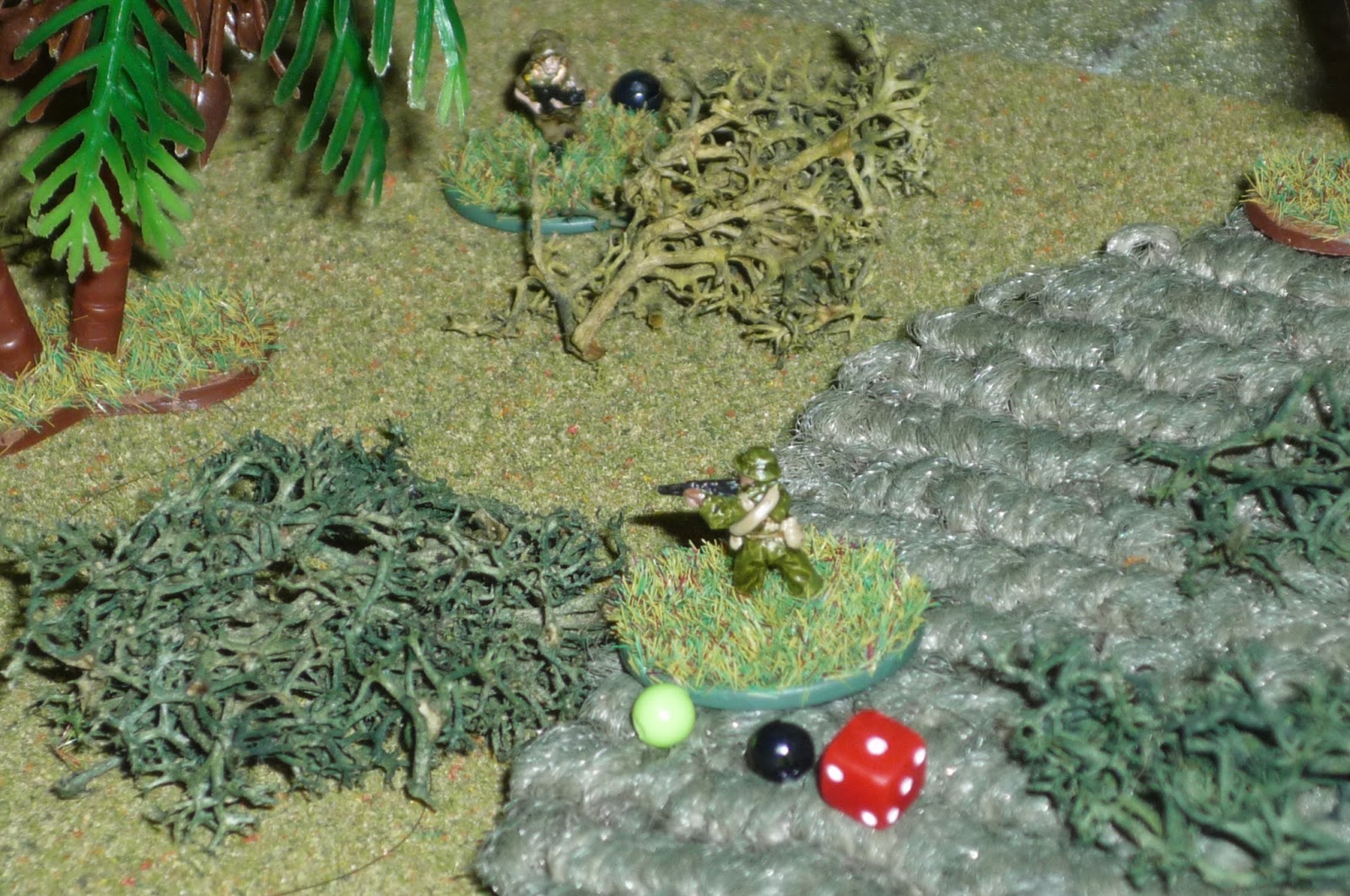 Bradley (top center), trying to make up for letting the squad down last fight, sprints left, passing Stallworth, running all the way up the left side until within just yards of the NVA Tail-End Charlie (bottom center).  Bradley fires but misses... 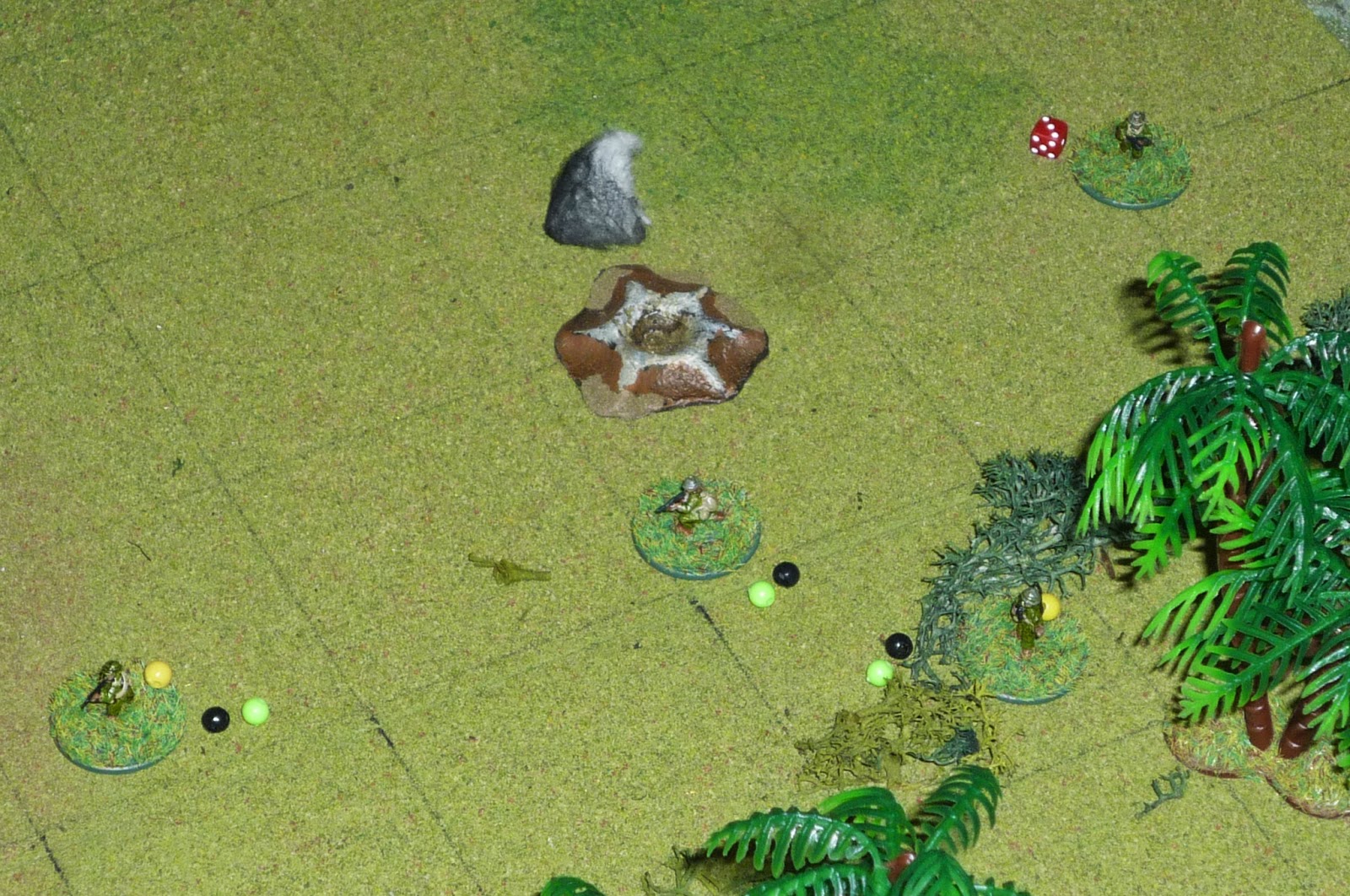 The NVA leader recovers from the grenade that landed at his feet (top center) and sprints to his left, going prone in the bushes (bottom right). 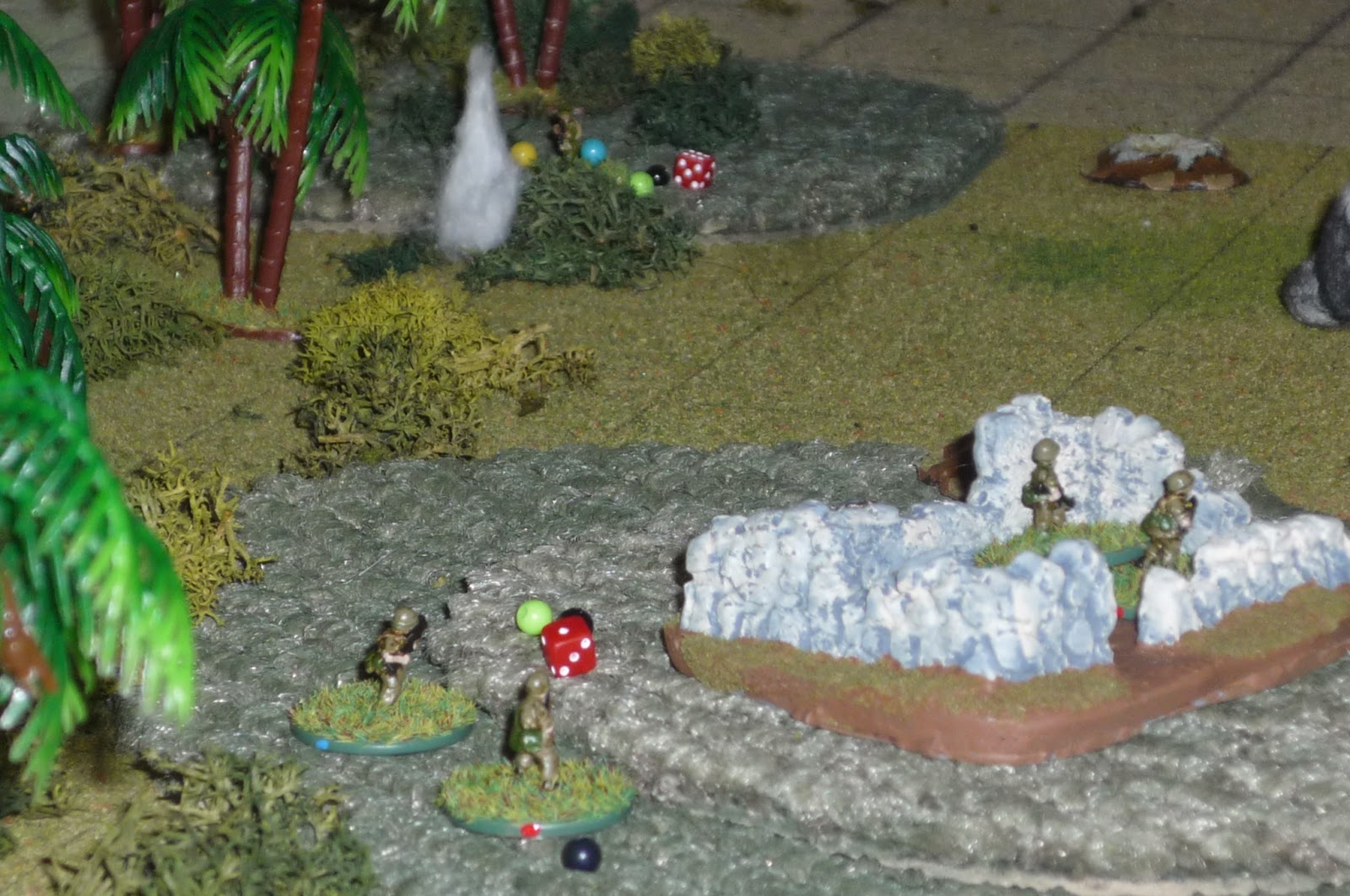 Ham (bottom left) sprints up next to Stallworth on the left side, and takes a shot with his M-79 at the NVA Tail-End Charlie (top center), which was a real dangerous proposition  for Bradley (hidden in the bushes at top left) given how inaccurate the grenadiers are generally, but this one landed short by one inch, lightly wounding the NVA. 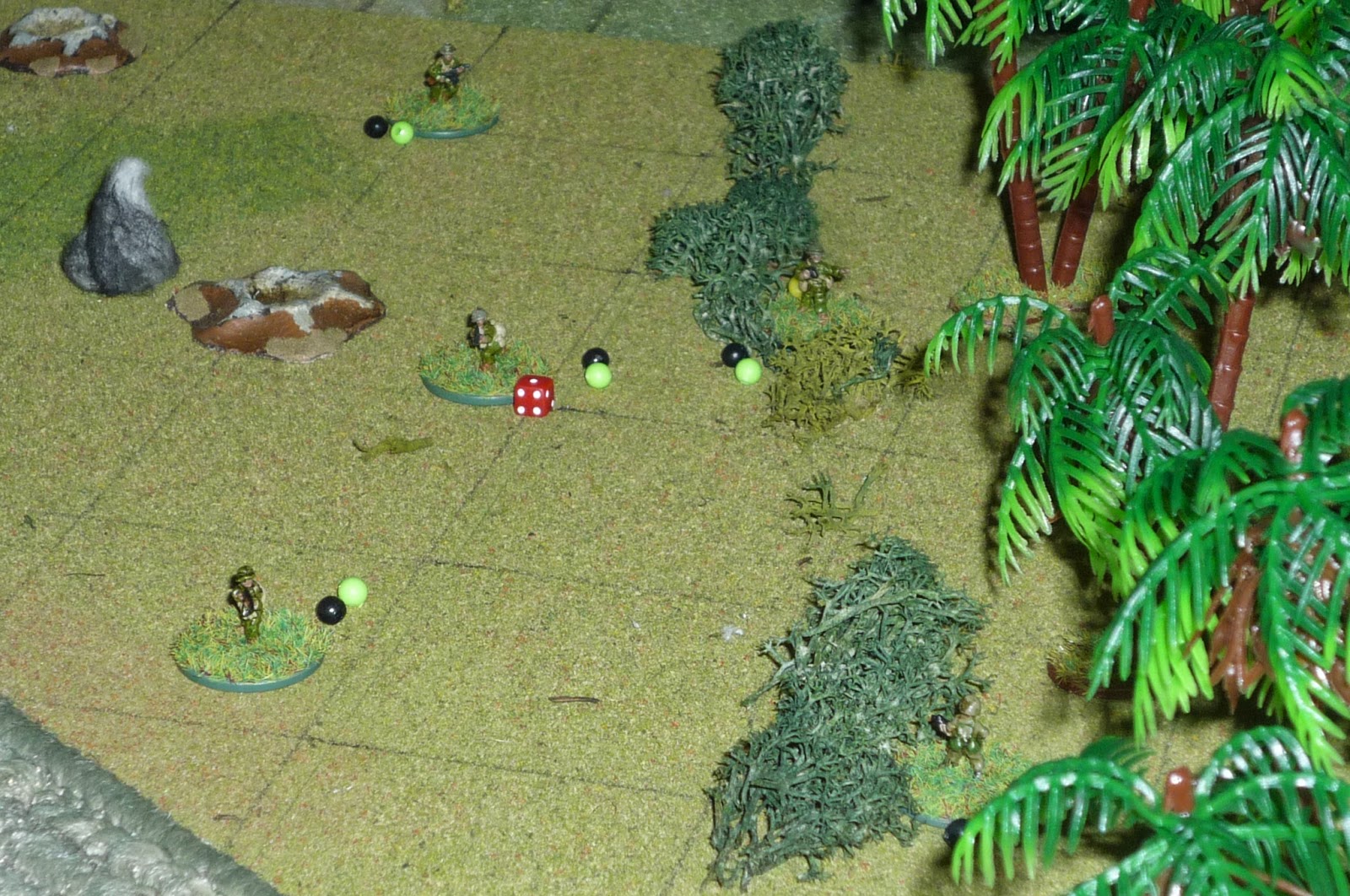 The last NVA (top center) activates, dropping prone and curling into the fetal position due to all the death and destruction around him.  Kolb sprints into the jungle on the right (bottom center right) and takes a shot at the center NVA (w/red dice), but misses.  The NVA pointman is at far left, with comm site off camera at bottom left and NVA leader in bushes to right of NVA with red dice. 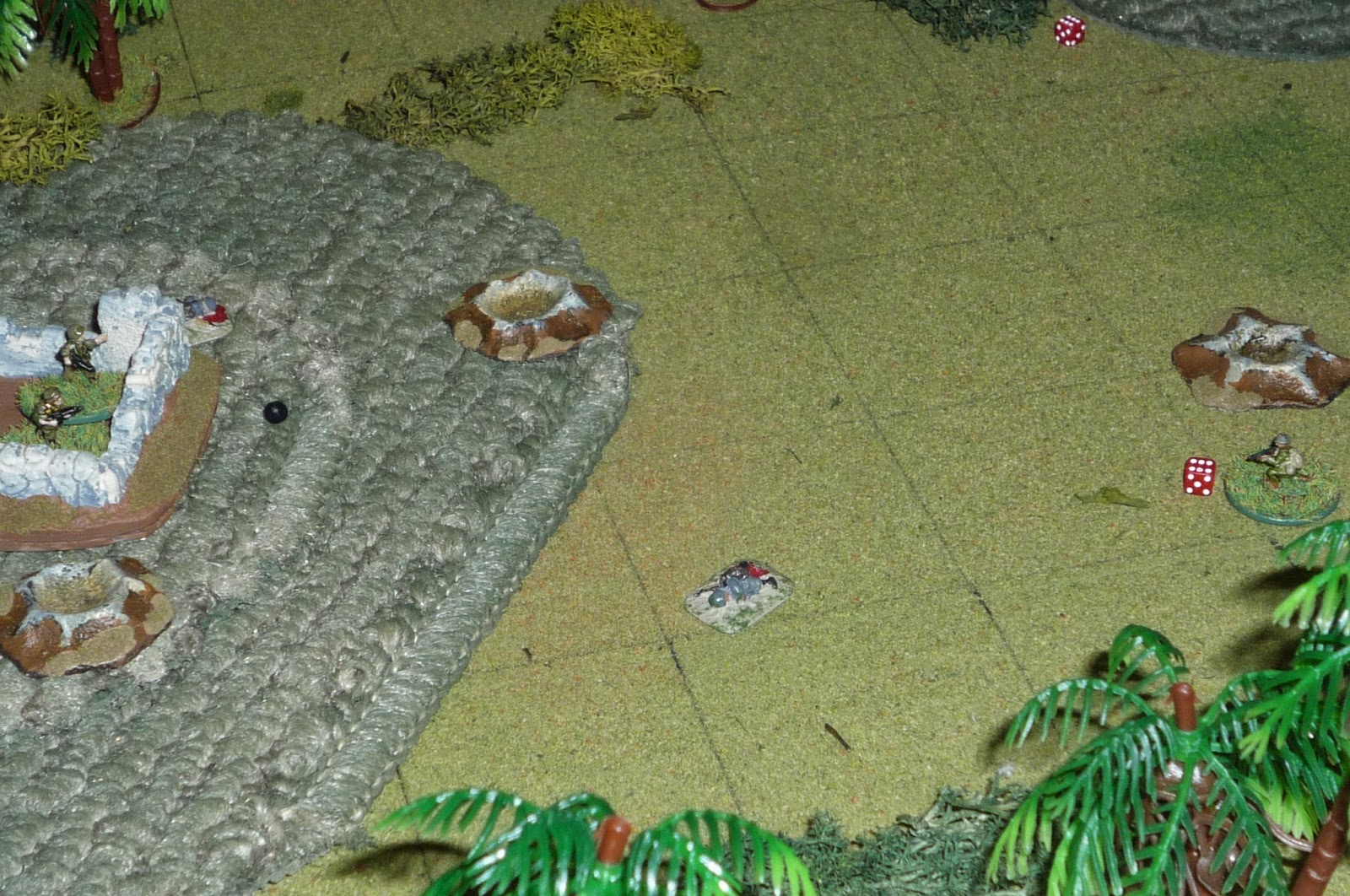 Banaszak (far left, in comm site) passes his test and opens up, putting down the NVA pointman (center), but missing his partner (far right). 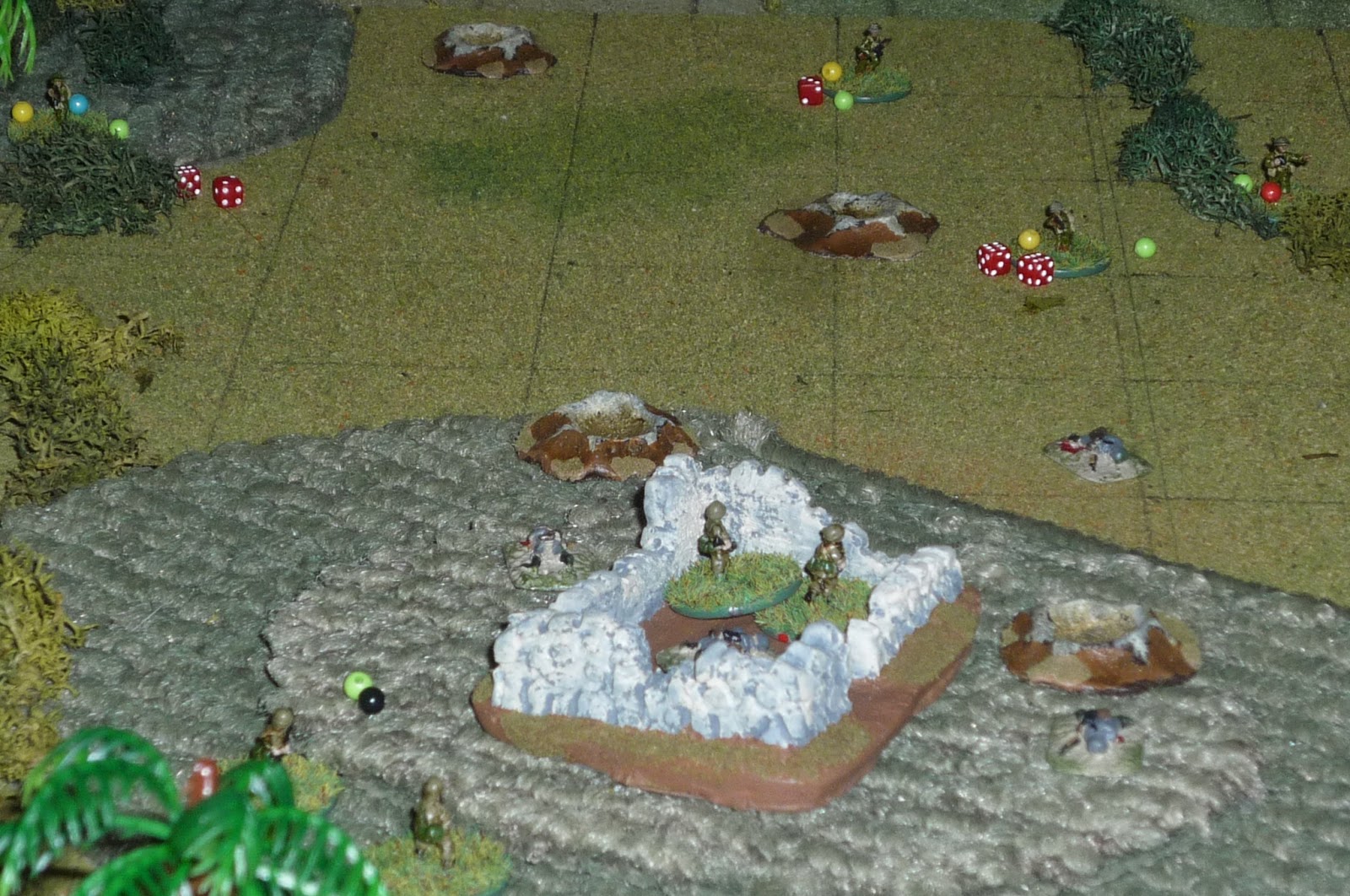 Stallworth (bottom left, with Ham) fires at Tail-End Charlie (top left), missing.  Then he turns the gun right and unleashed hell: the next two NVA are lightly wounded (you can see the yellow beads in center), and seriously wounding the NVA leader (red bead at far right). 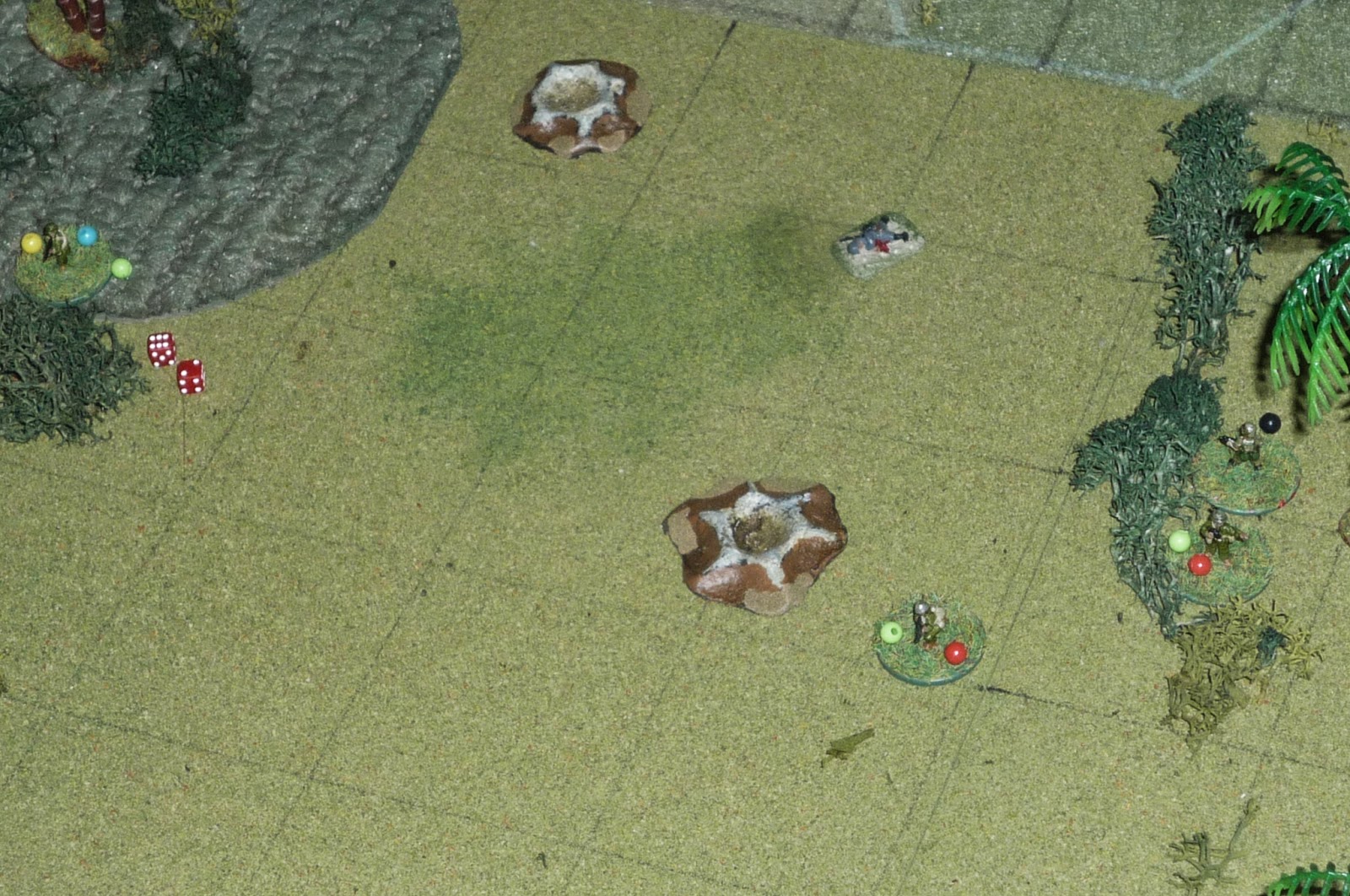 Kolb sprints ahead to the seriously wounded NVA leader at far right (he was previously off camera t bottom right, comm site is off camera at bottom left) and fires, seriously wounding the NVA at center, then firing again and putting down the NVA at top center.  Tail-End Charlie (far left) surrenders to Bradley.

That's how we like them, quick and painless!  The BDA showed a destroyed comm site and three KIA, and the squad added another 2 KIA and three captured (2 were seriously wounded), with no casualties themselves.

Banaszak: "Call in the extract, let's get the hell outta here before they send more troops!"

Despite Swan's earlier, ahem, inconsistencies, he's done a great job the last two fights and is turning into a steady hand, as has Ham, so I'm bumping both of them to S&D 4.  Don't let me down...

Email ThisBlogThis!Share to TwitterShare to FacebookShare to Pinterest
Labels: 10mm, Batrep, In Country, Skirmish, Solo, Some Corner of a Foreign Field, Vietnam