JCSOG was on the go again this weekend, this time playtesting a set of rules from a fellow TMPer.  In the still of the night a JCSOG team stole into a small town on the outskirts of Fes, Morocco, to deliver communications gear to a highly placed intelligence operative transiting the area.  As the sun begins to rise over the eastern horizon, the JCSOG team is now exfiltrating the area on foot enroute to its helicopter landing zone. 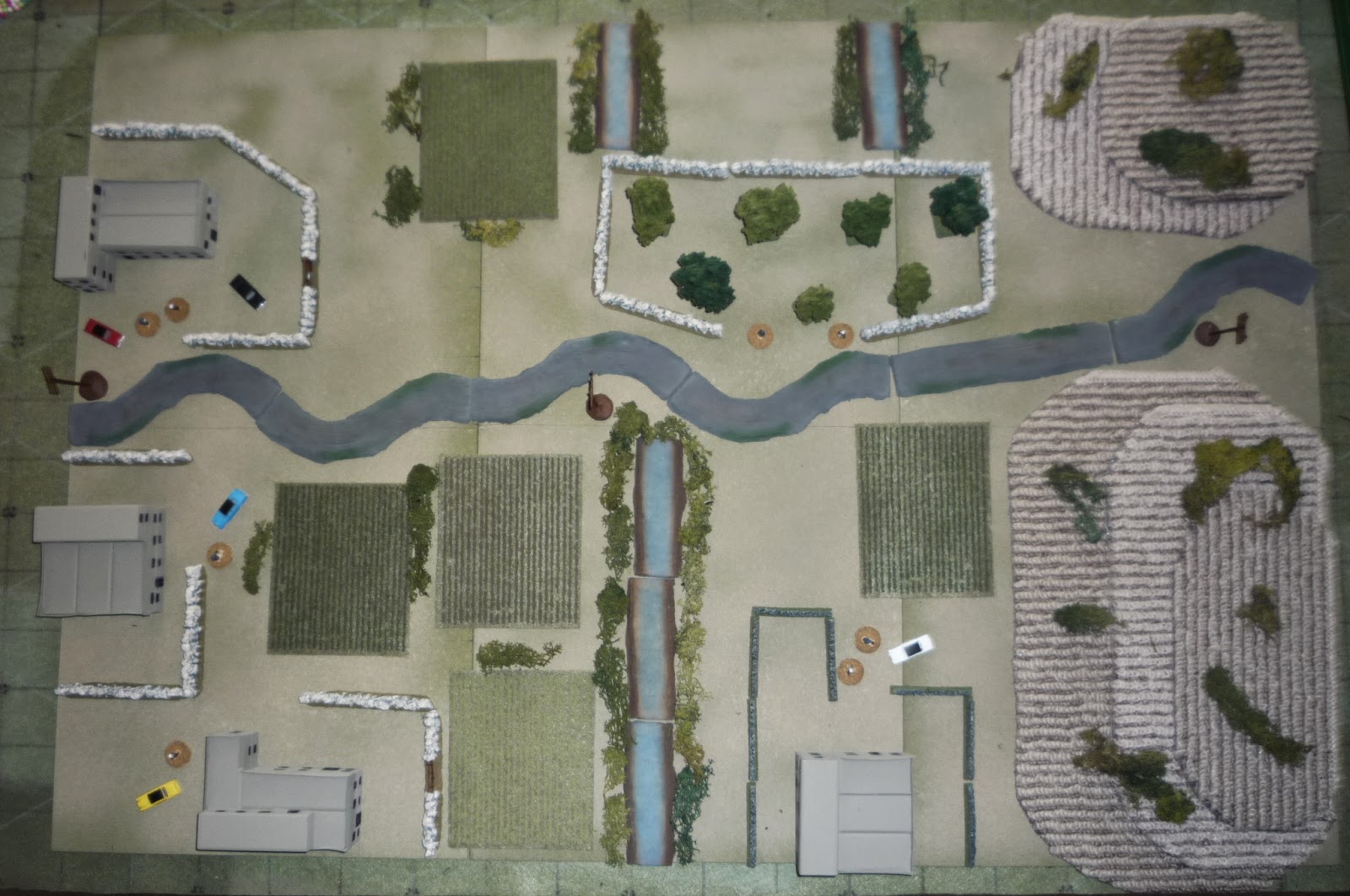 The board, 3' x 2,' north is up.  The village is to the left, which the JCSOG team will be departing, with the aim of getting off the map to the right (east), to their HLZ. 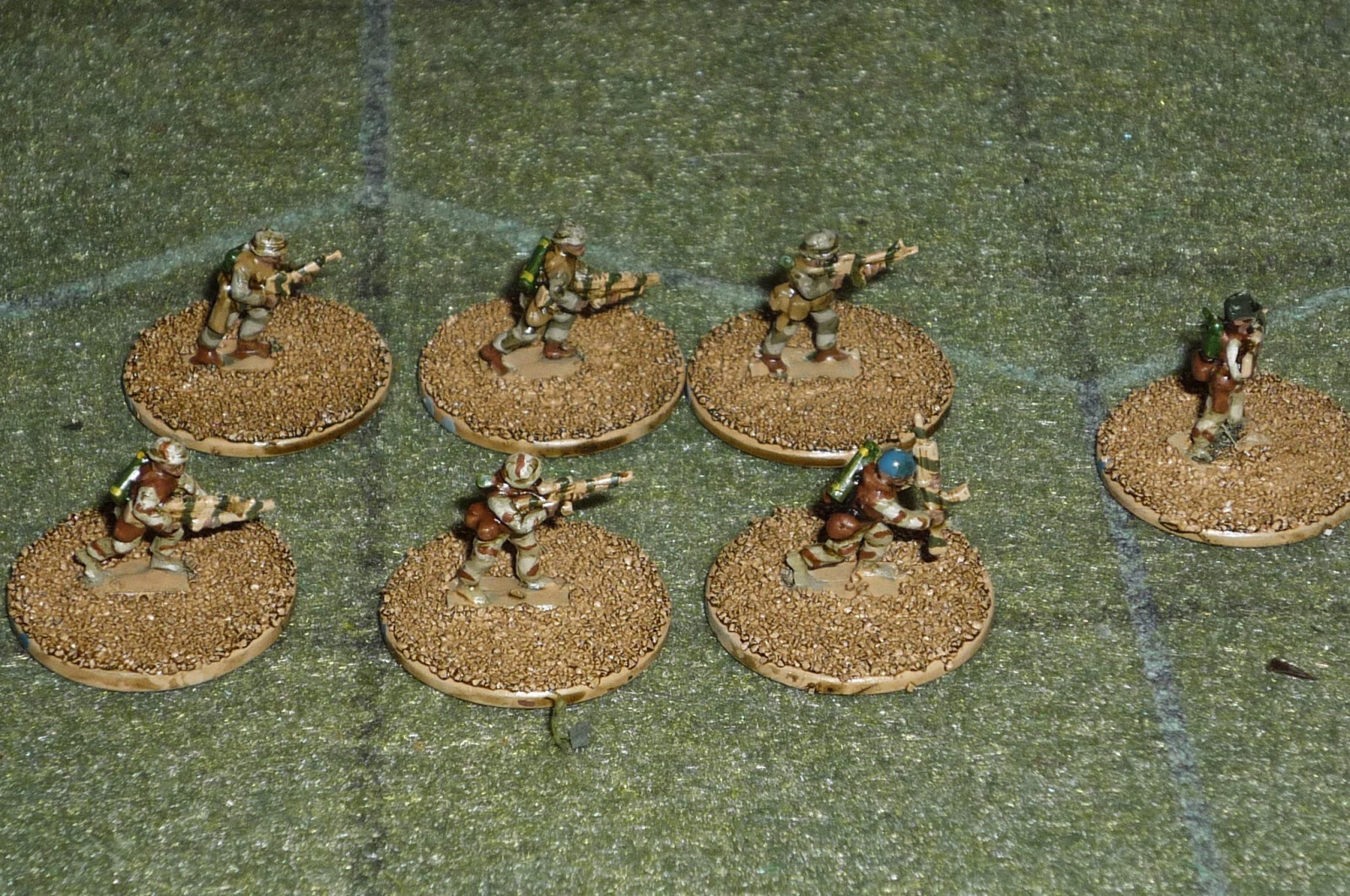 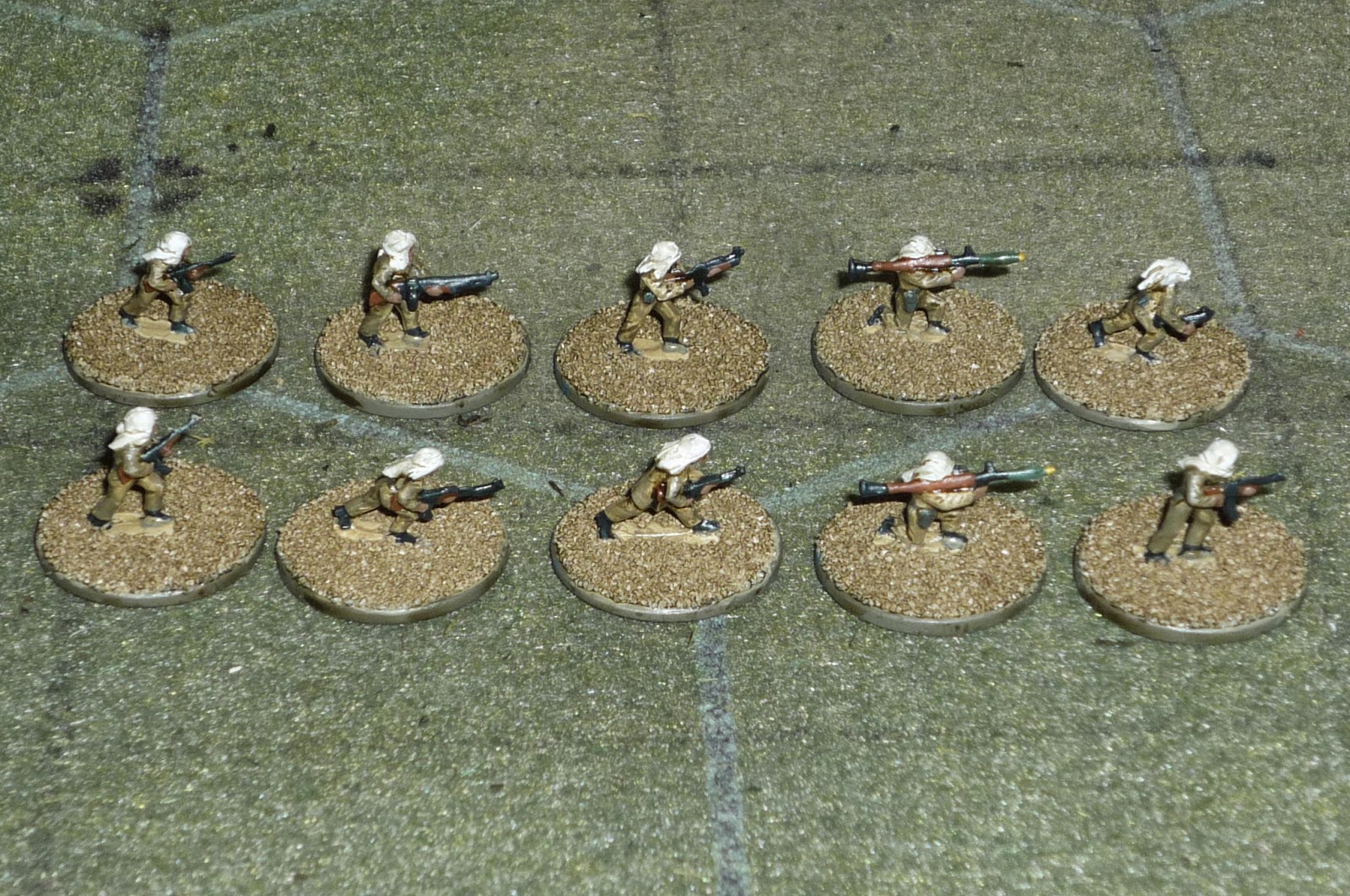 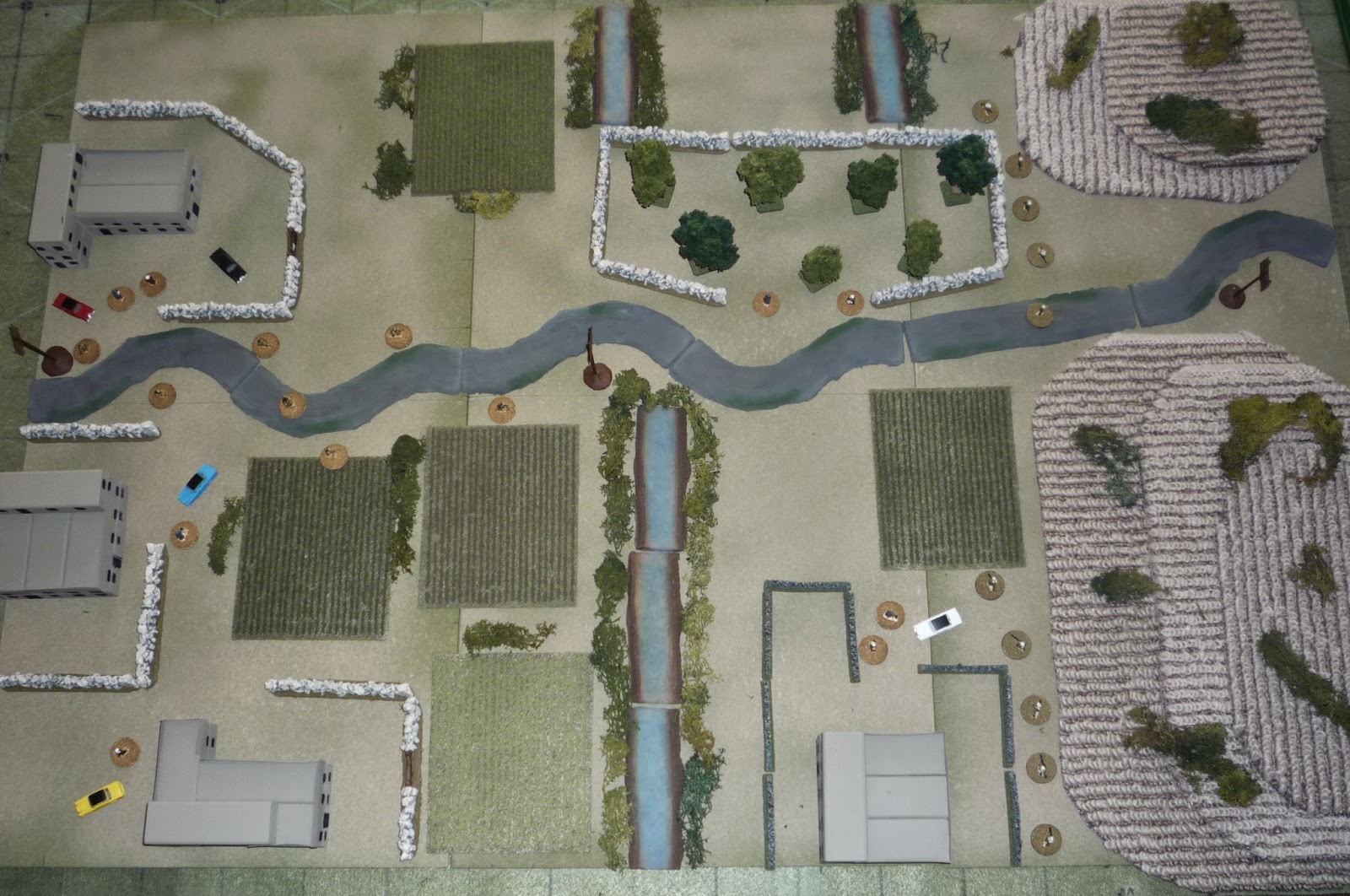 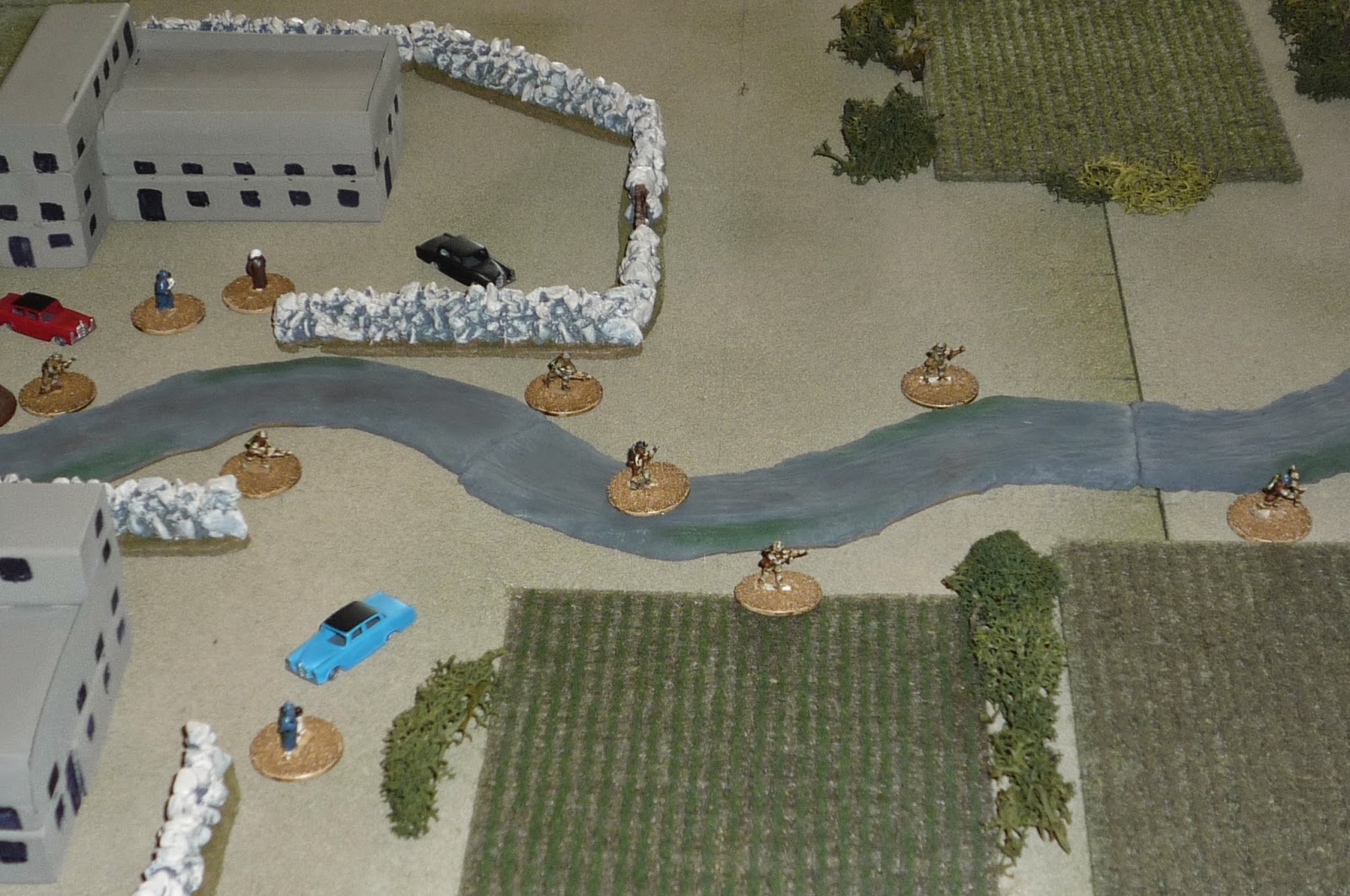 Again, Torch, Peso, and Snapshot north of the road, Hammer on the road, and Thistle, Scorecard, and Derby south of the road.  Civilians are scattered throughout the area. 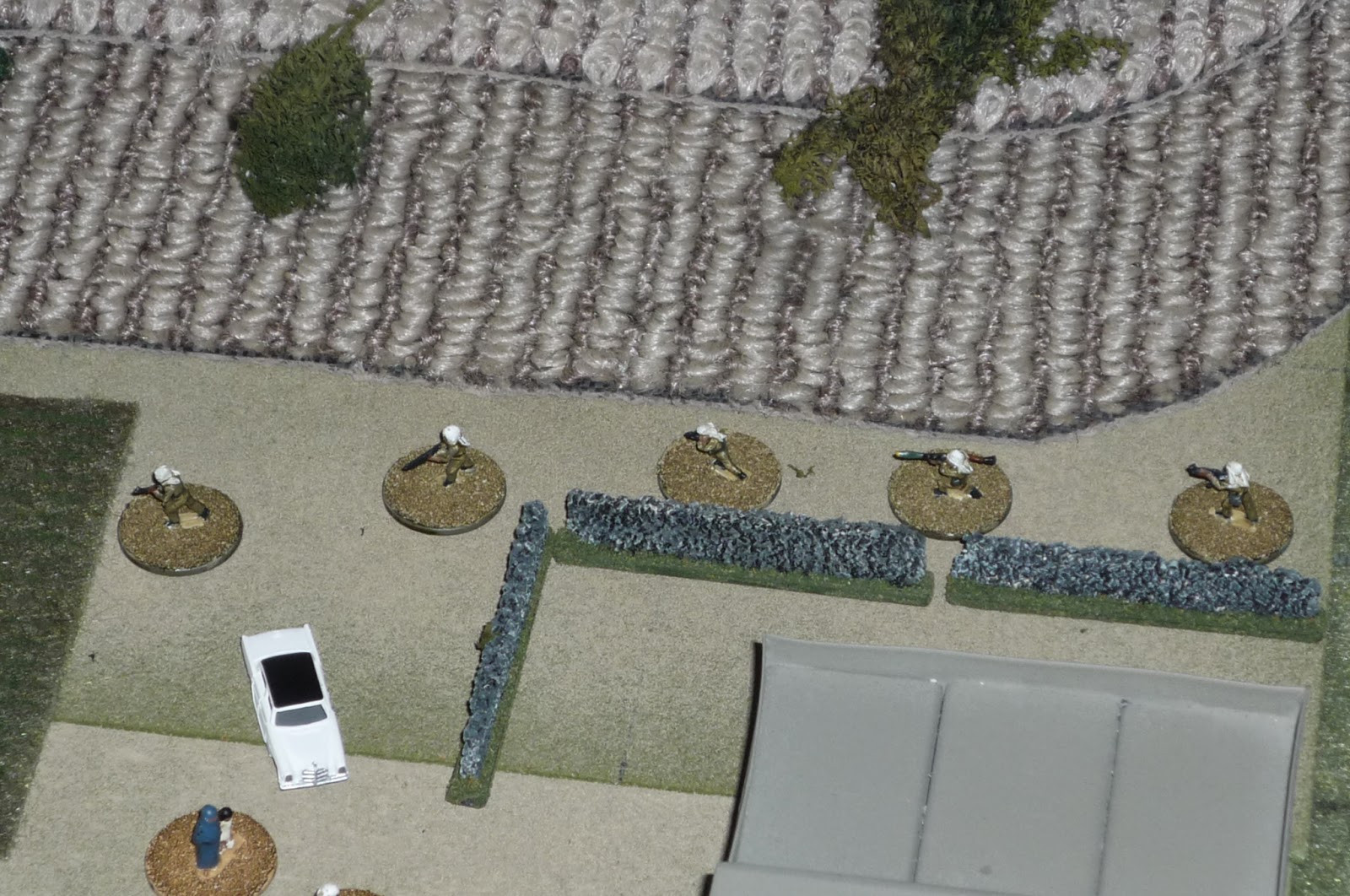 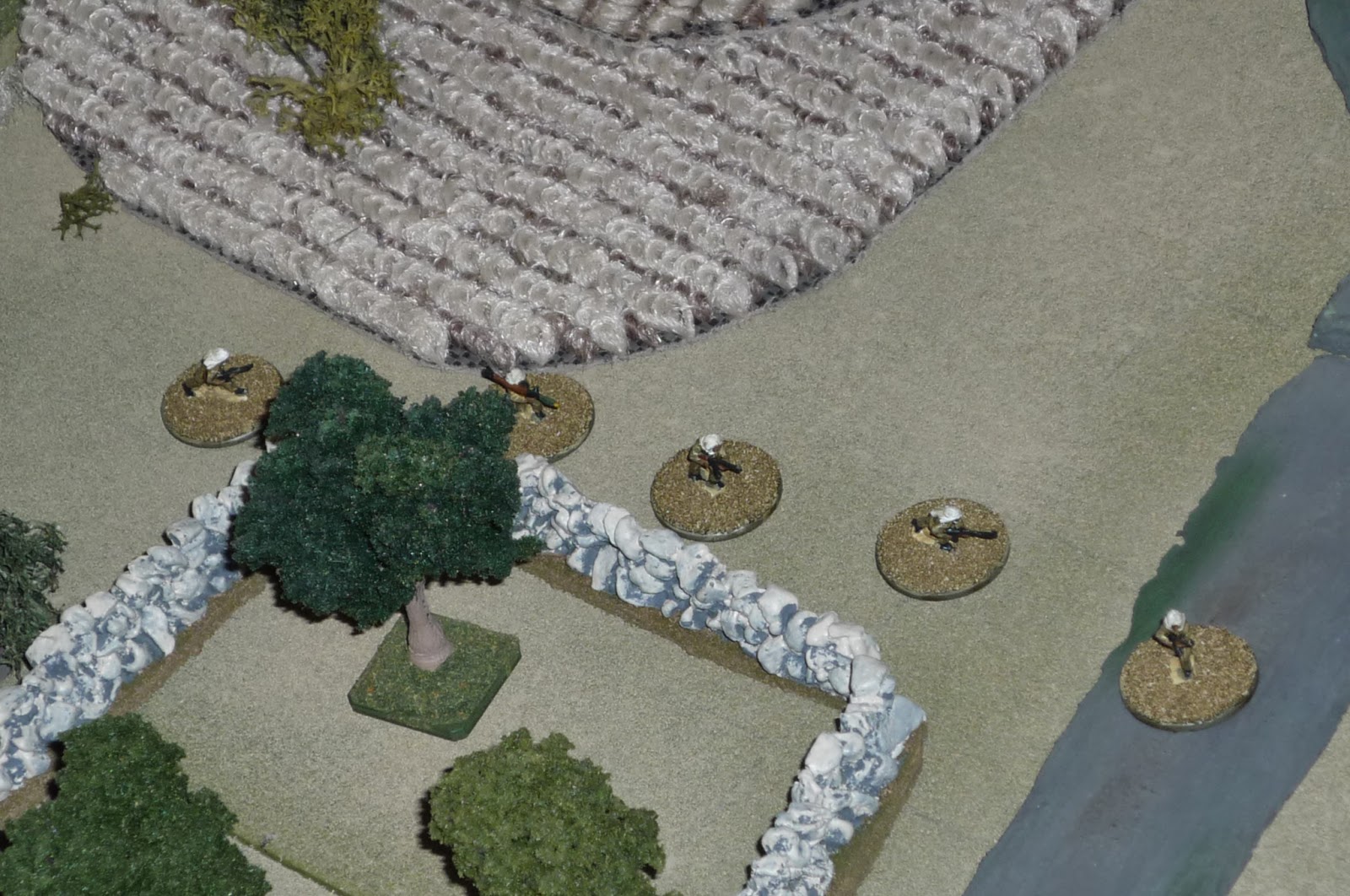 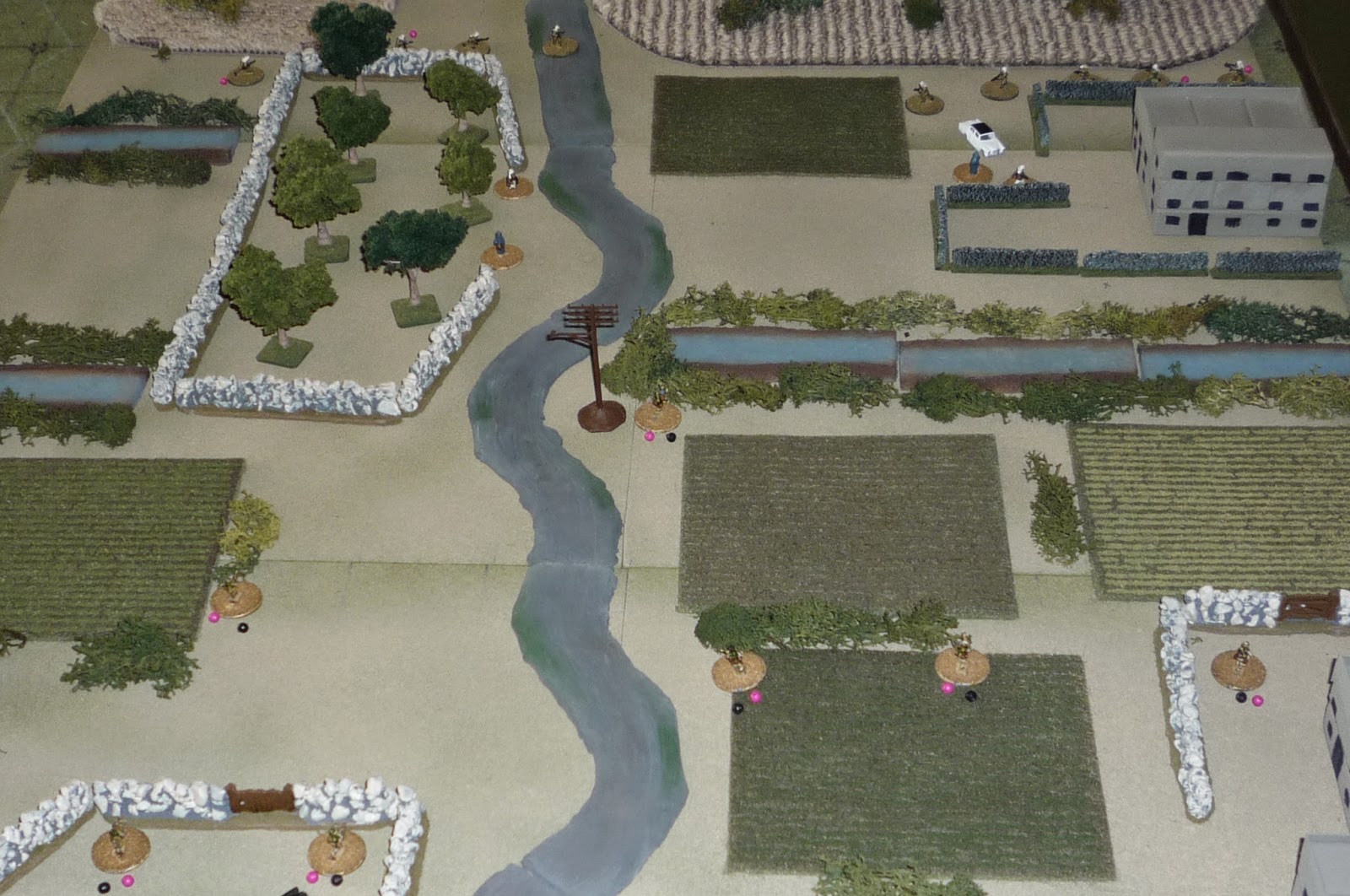 The game starts with all personnel unspotted and JCSOG activating first (higher 'Skills & Drills).  The action starts with Torch (center left, behind bush) spotting the Tango (top center) on the road.  He then radioed the squad and moved left behind the bush.  Next, Thistle (center, behind bushes at canal) moved up to cover, spotted a Tango of the southern patrol (top right), then radioed the squad.  The team leader decides to deploy for hasty ambush to the front, so Scorecard (center, there are two guys behind the bush, he's on the right, Hammer's on the left) moves right behind the bushes, spotted a 2nd Tango of the south patrol, and radios team, while Derby moves cautiously to the far right (behind wall). Snapshot (two guys behind wall at bottom left, Snapshot is left, Peso is right) moves left, tries but fails to spot a third Tango of the southern patrol, but Peso moved over and managed to make the spot.  The team is set up pretty well to execute a devastating ambush on the unsuspecting Ir-Hab troops. 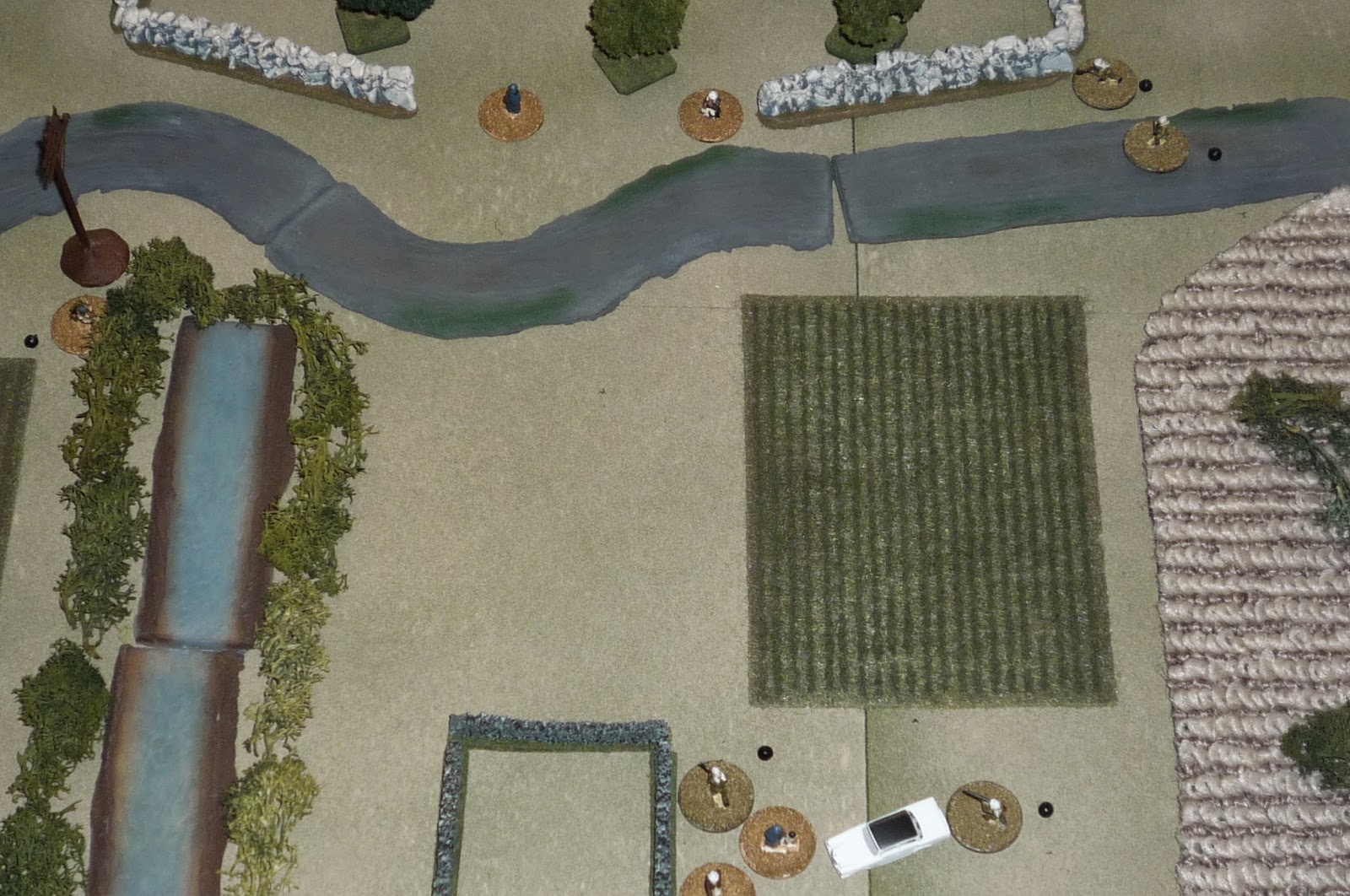 But, the Tango on the road (top right) looks to his right and, Hey! there's a special forces guy (Thistle) hiding in the bushes at the canal  (left center)!  The Tango fires and misses badly, but the shots warn the rest of the Ir-Hab members to the presence of the JCSOG team.  The northern patrol LMG gunner moves up to the corner and opens up on Thistle, also missing, but adding more 'stress' to the beleaguered JCSOGer.  A Tango from the southern patrol (bottom right) moves up and fires at Thistle, still missing but more stress, as does the southern patrol LMG gunner. 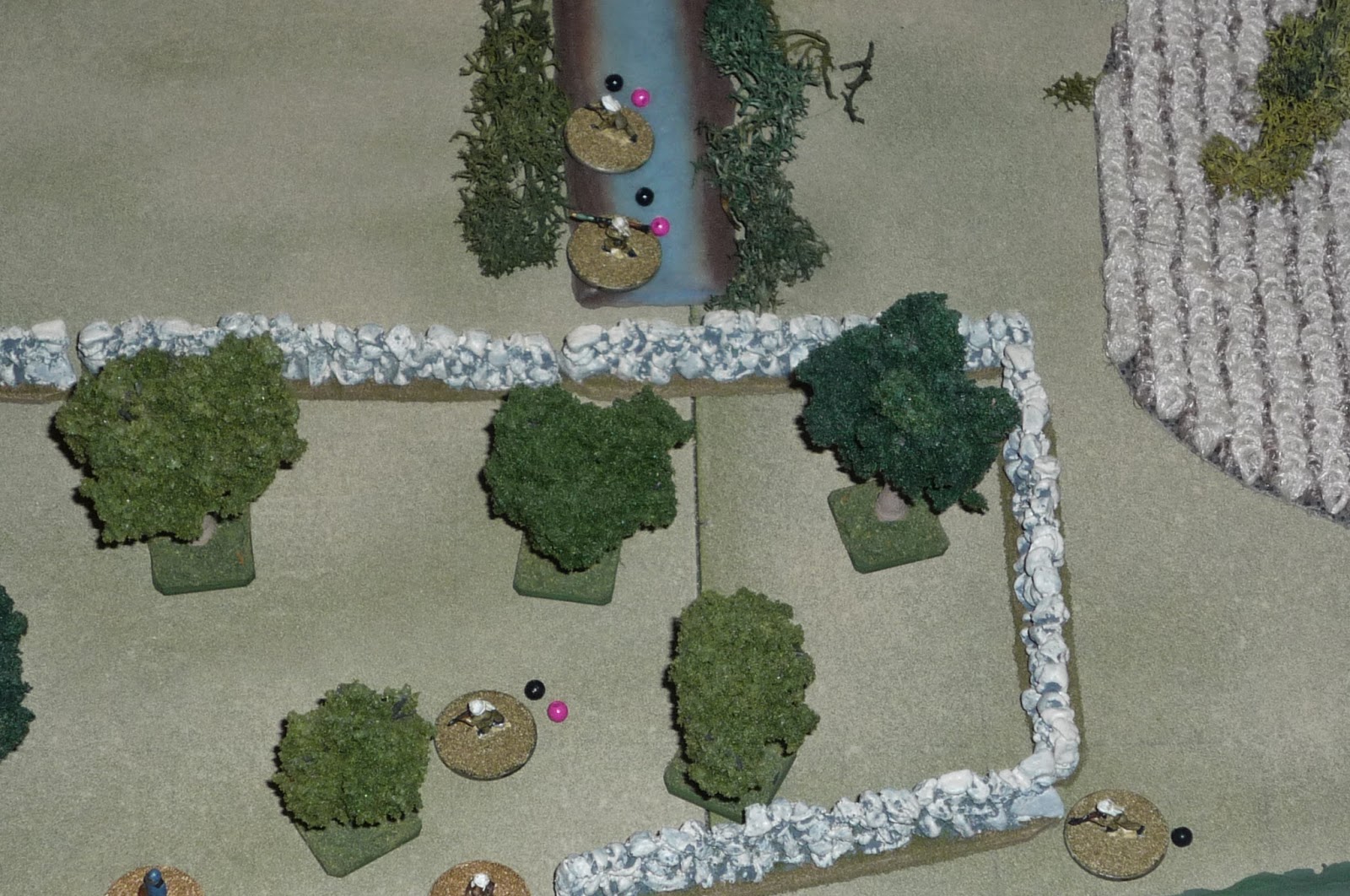 Back with the northern patrol, the team leader hops the wall and moves up into the orchard (center), while the remaining rifleman and RPG gunner move to their right (north) and into the northern canal. 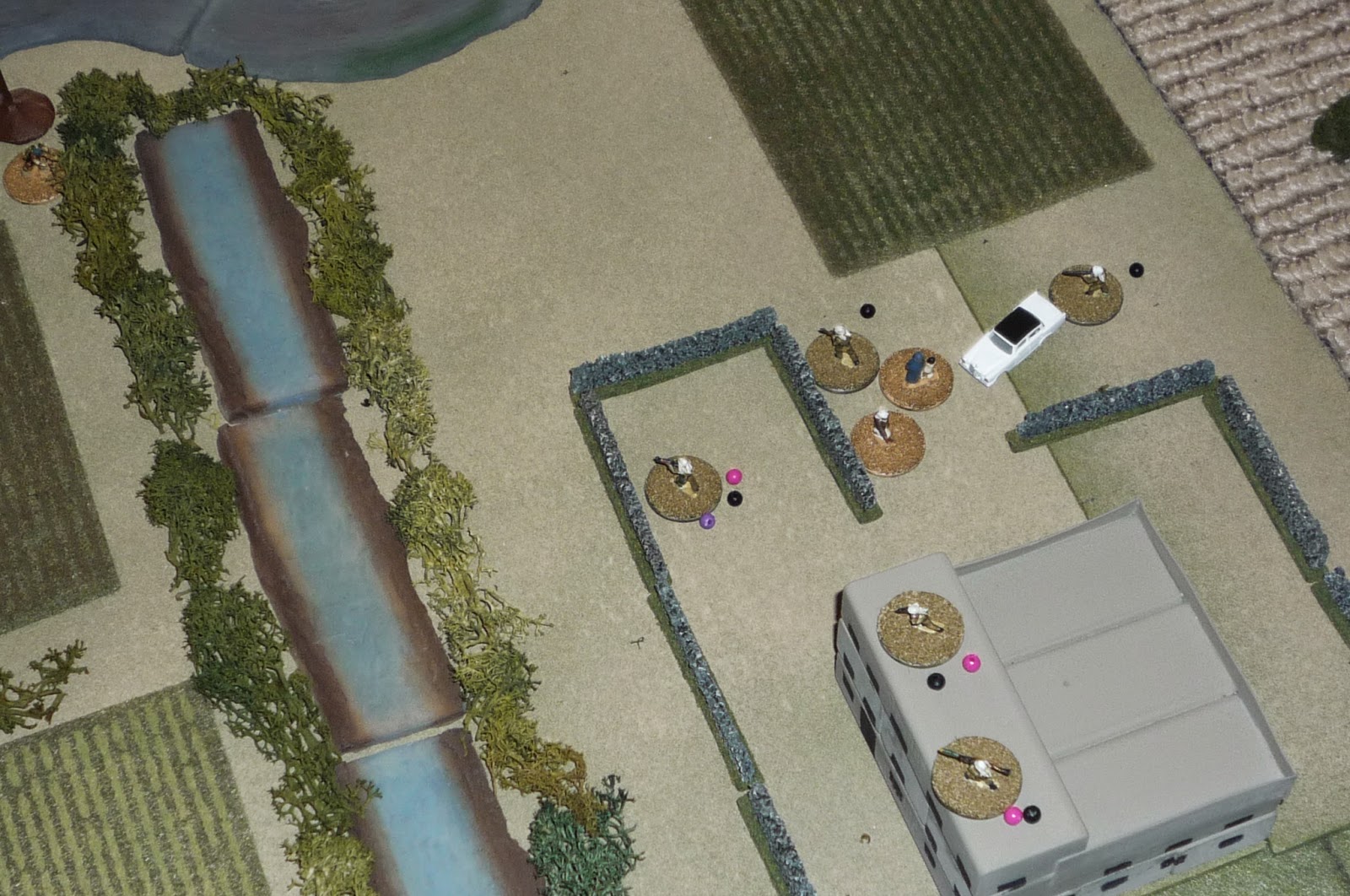 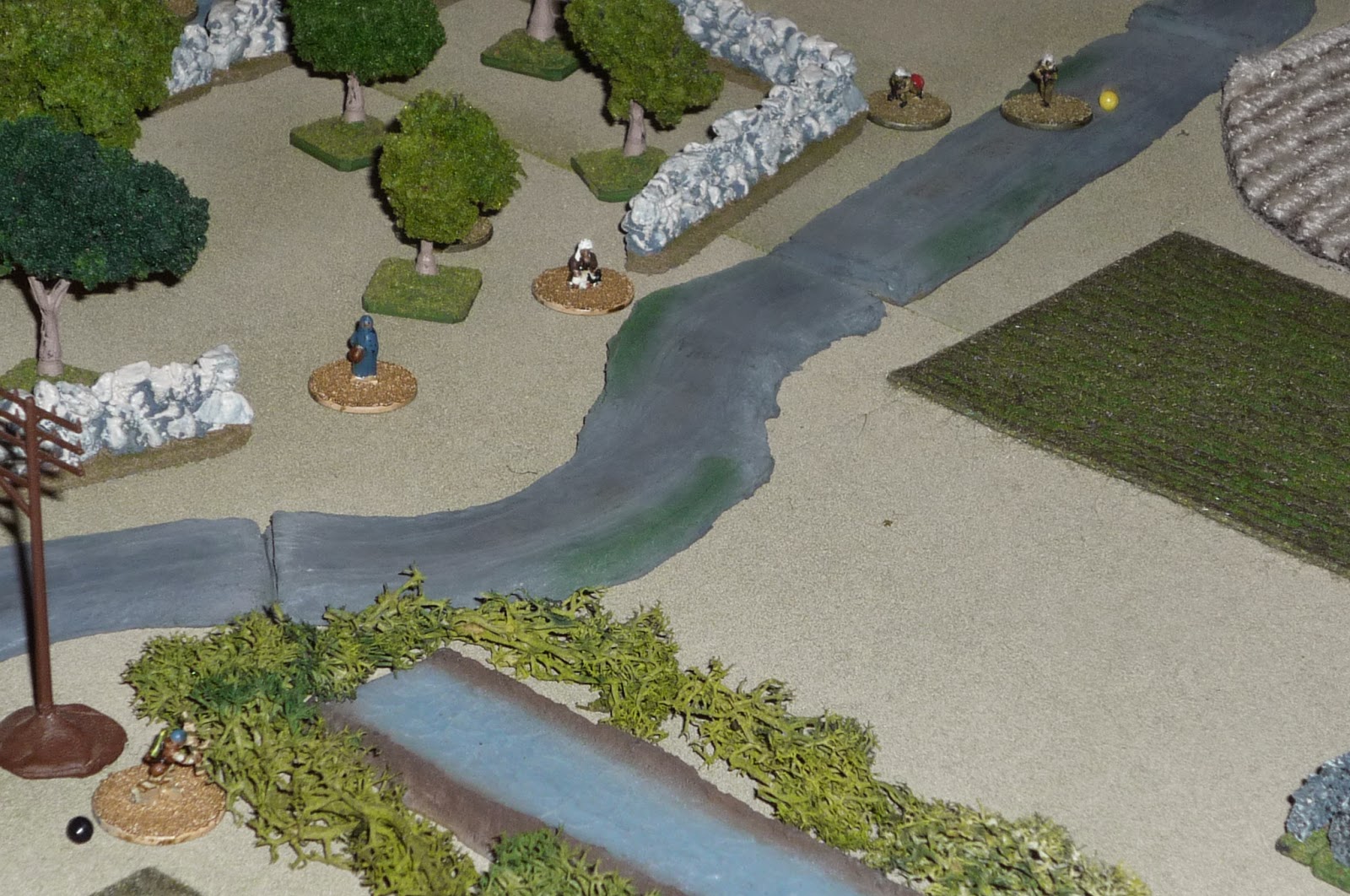 Thistle (bottom left) manages to pass his morale test, and fires his grenade launcher at the two northern patrol Tangos.  The round misses, but the 'scatter' roll is only one inch off, and both Tangos in the road receive light wounds (yellow bead).  Thistle fires twice more, missing the first time, but the second puts a serious wound (red bead) on the northern patrol LMG gunner. 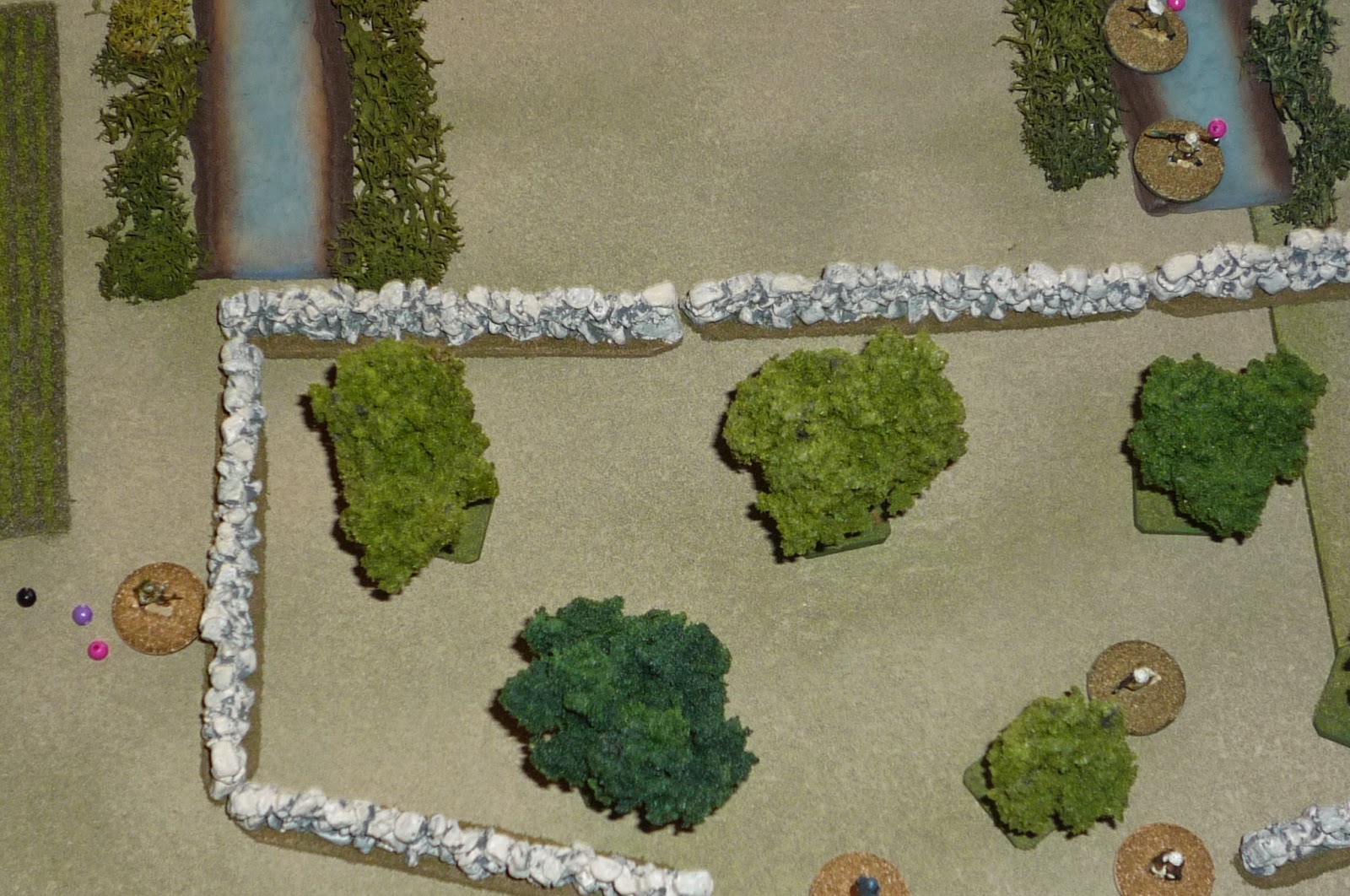 Torch (far left) moves up to the wall, spots the Tango in the orchard, and takes a shot, but misses. 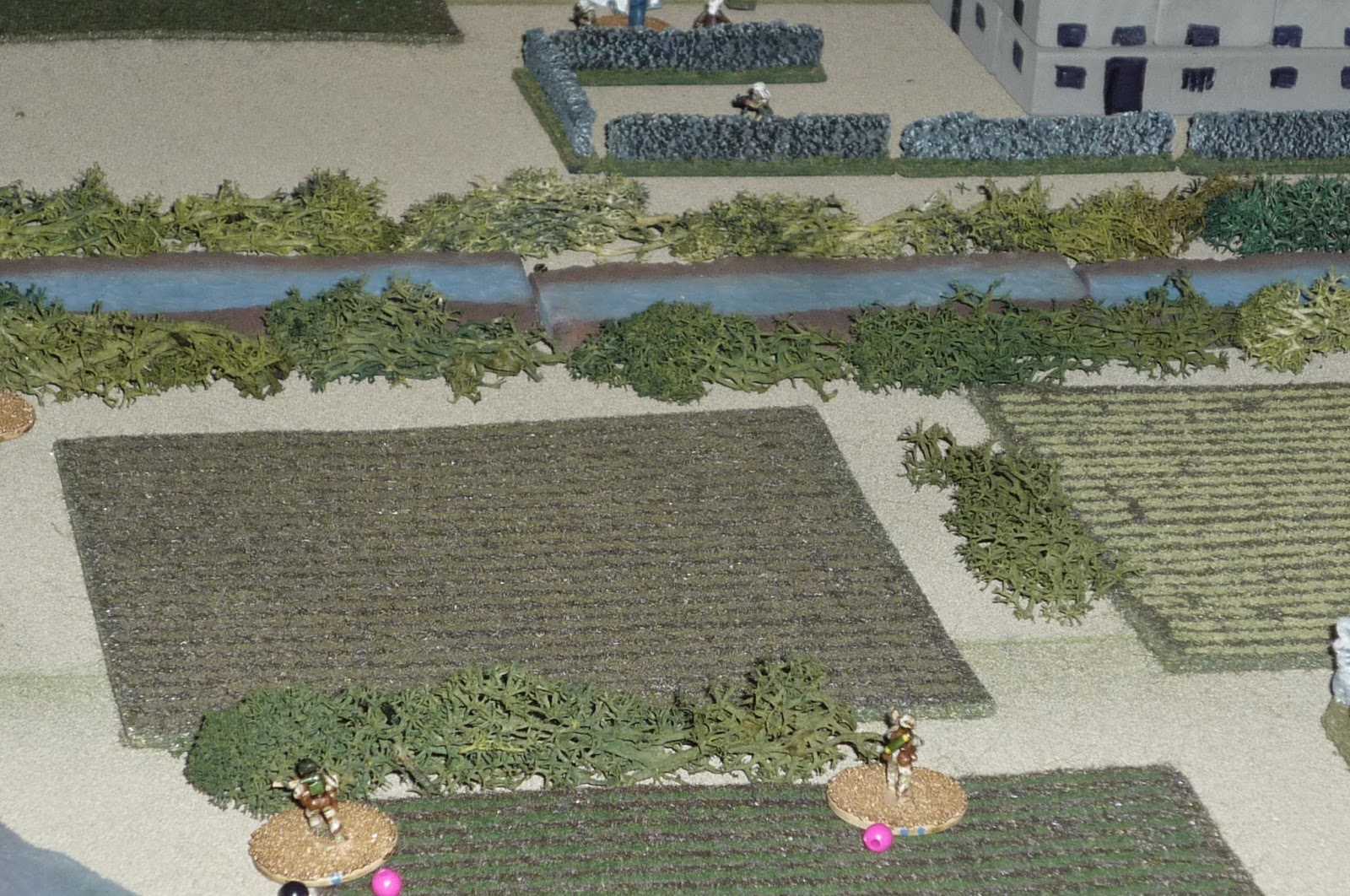 Hammer (bottom left) takes two tries, but spots the Tango at the wall (center top), and takes a shot but misses. 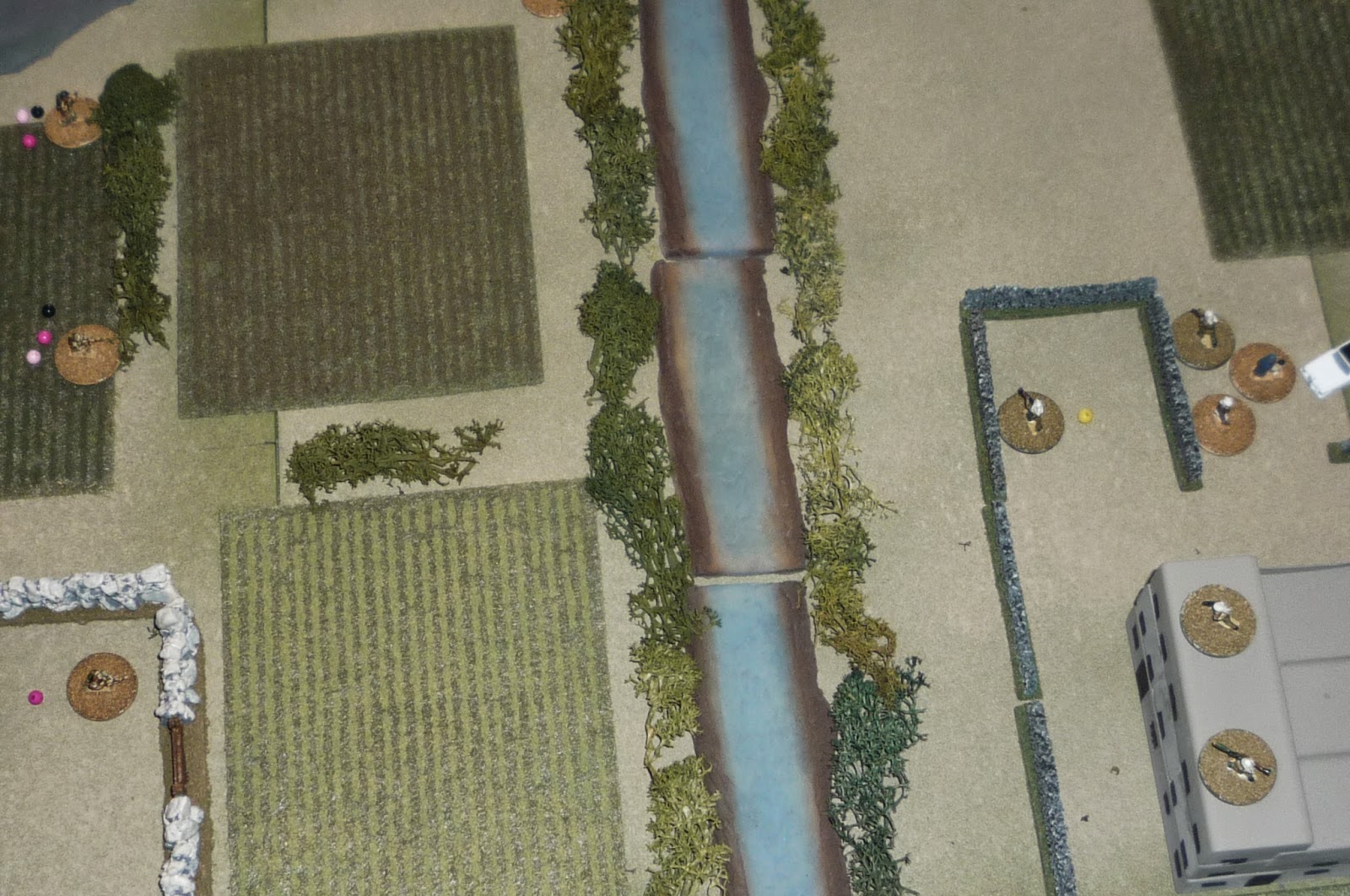 Scorecard (he and Hammer are at top left) fires at the Tango just spotted by Hammer at the wall (center right), and hits (rolled a 20!), but it's another light wound.  He then spends an action spotting the guys in the building bottom right (I only used one action, but they're right next to each other so I spotted them both).  Derby (bottom left) fires at rifle grenade at the two Tangos in the building, direct hit!  The leader goes down and the RPG gunner is seriously wounded. 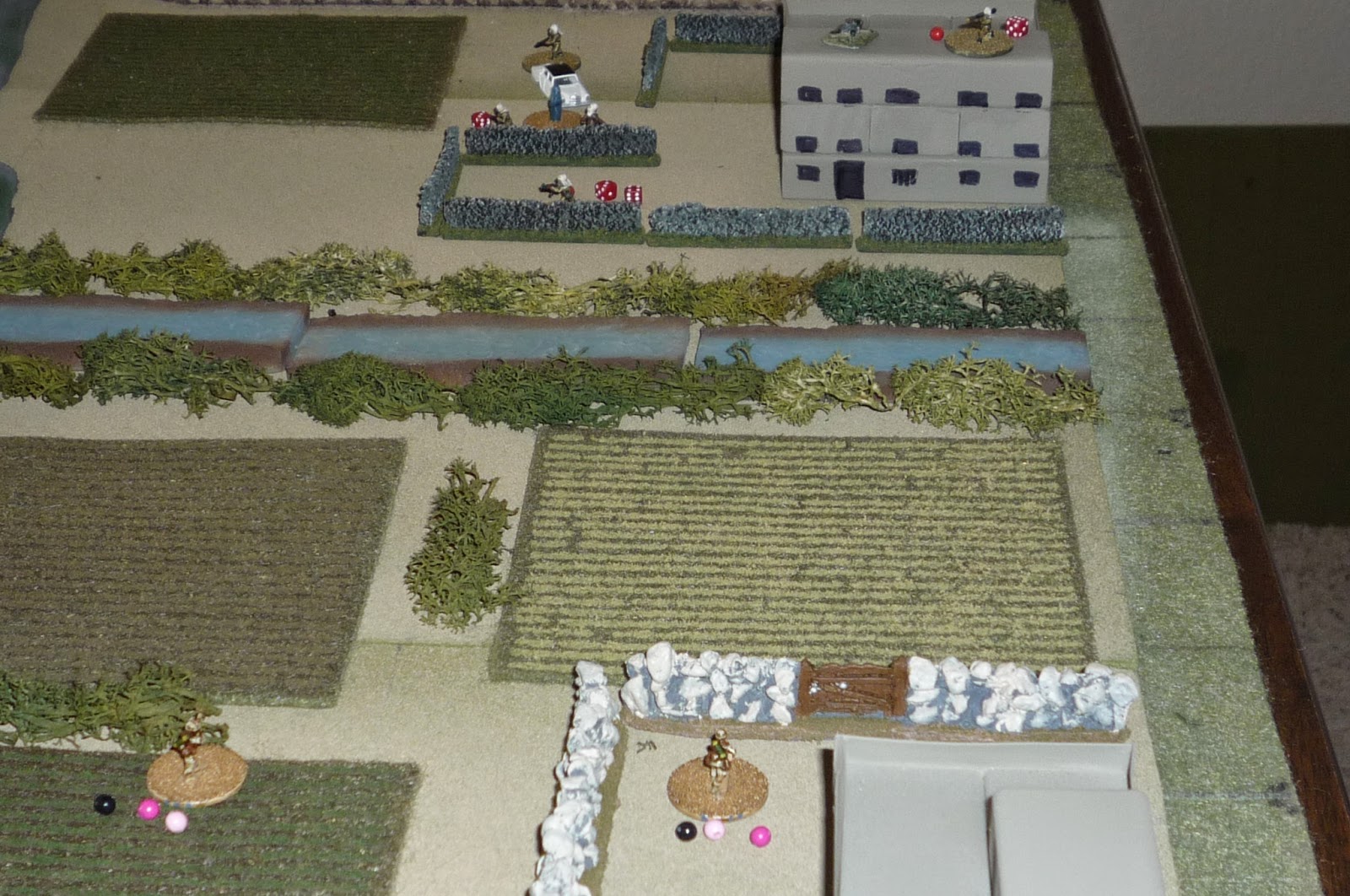 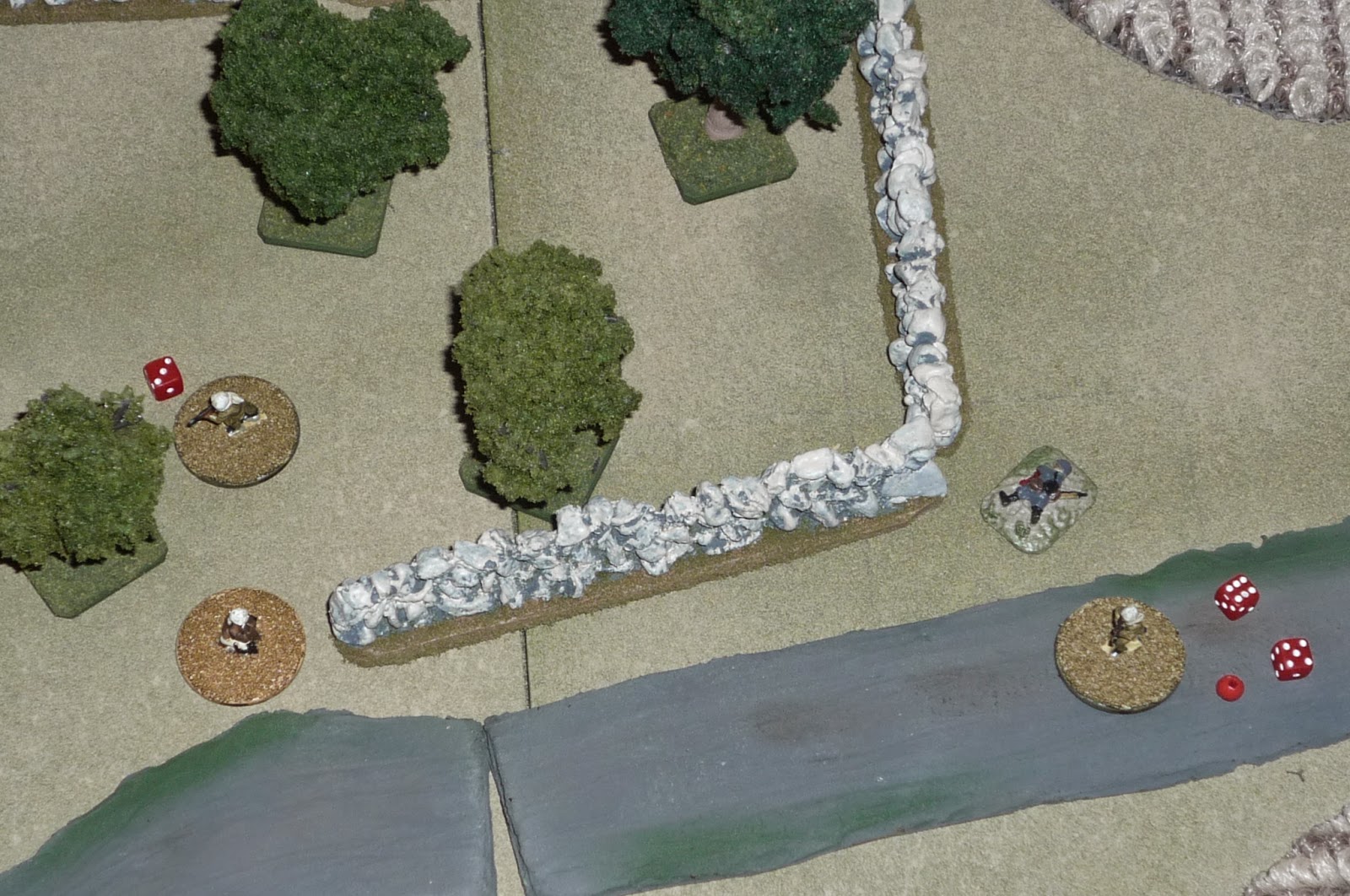 On the JCSOG left, Peso open up, firing another rifle grenade at the two Tangos in the road (bottom right), putting the LMG gunner out of the fight and seriously wounding the other (the dice represent stress).  He then takes a shot at the Tango in the orchard (center left), missing, but giving him some more stress. 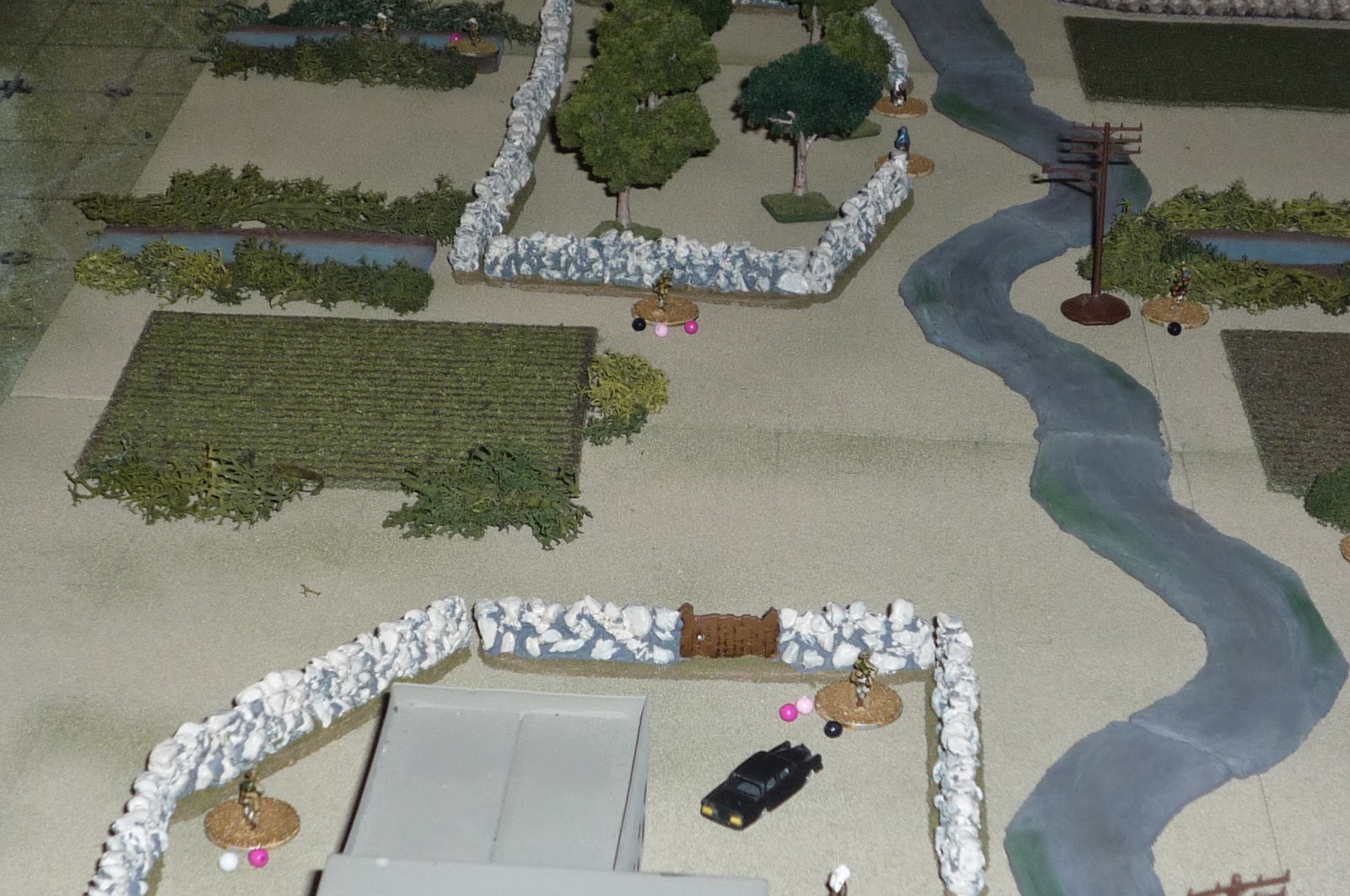 Snapshot (bottom left, with Peso to the right) moves left and goes on overwatch to counter the two Tangos in the north canal (top left). 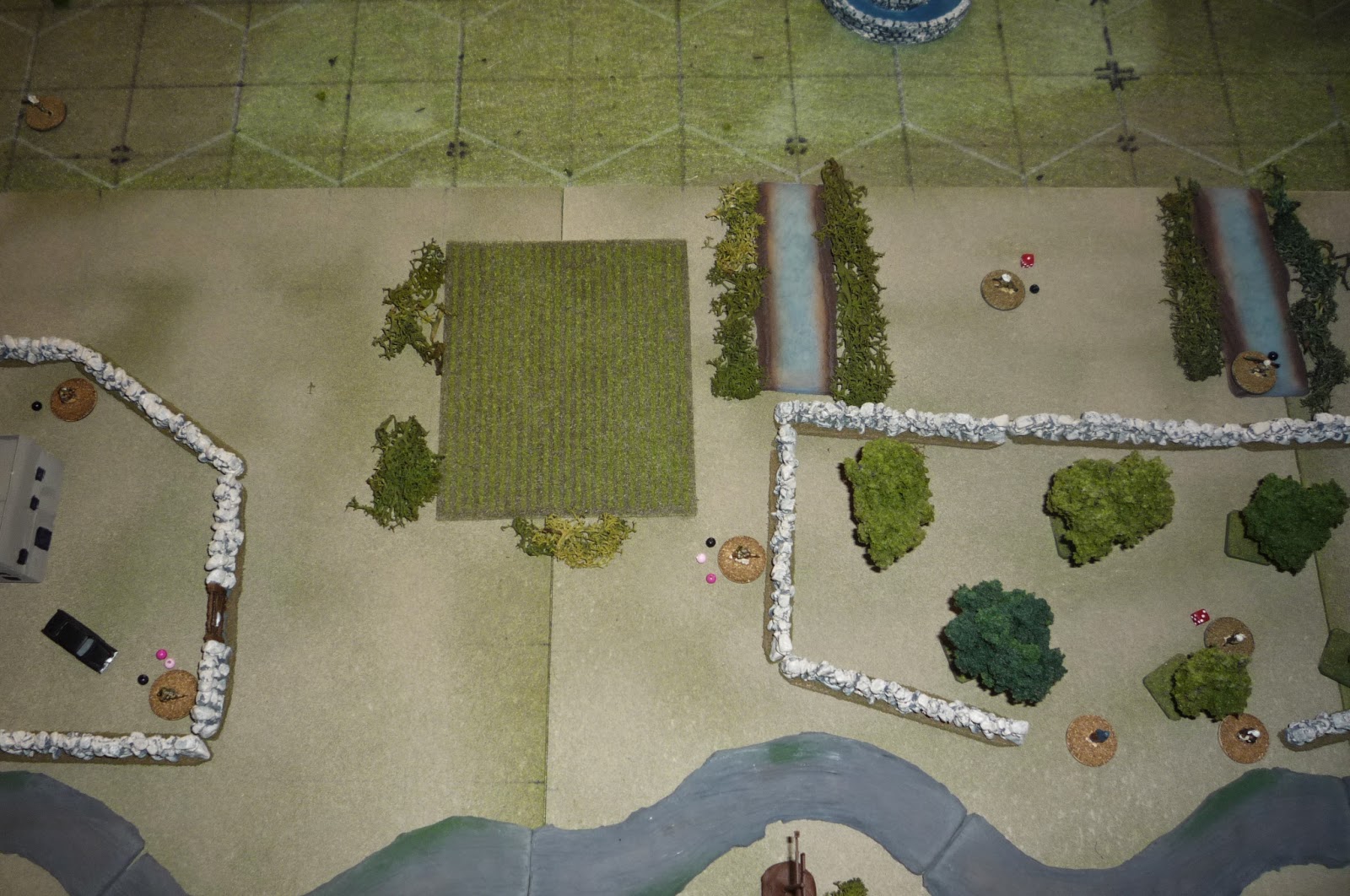 The Tango rifleman in the canal moves up, spotted by Snapshot (far left) on overwatch, and takes Snapshot takes an overwatch shot but misses.  Snapshot's firing makes it easy for the Tango to spot him, and the other Tango at the north canal, the RPG gunner, fires a rocket, but misses so badly it doesn't hit anyone. 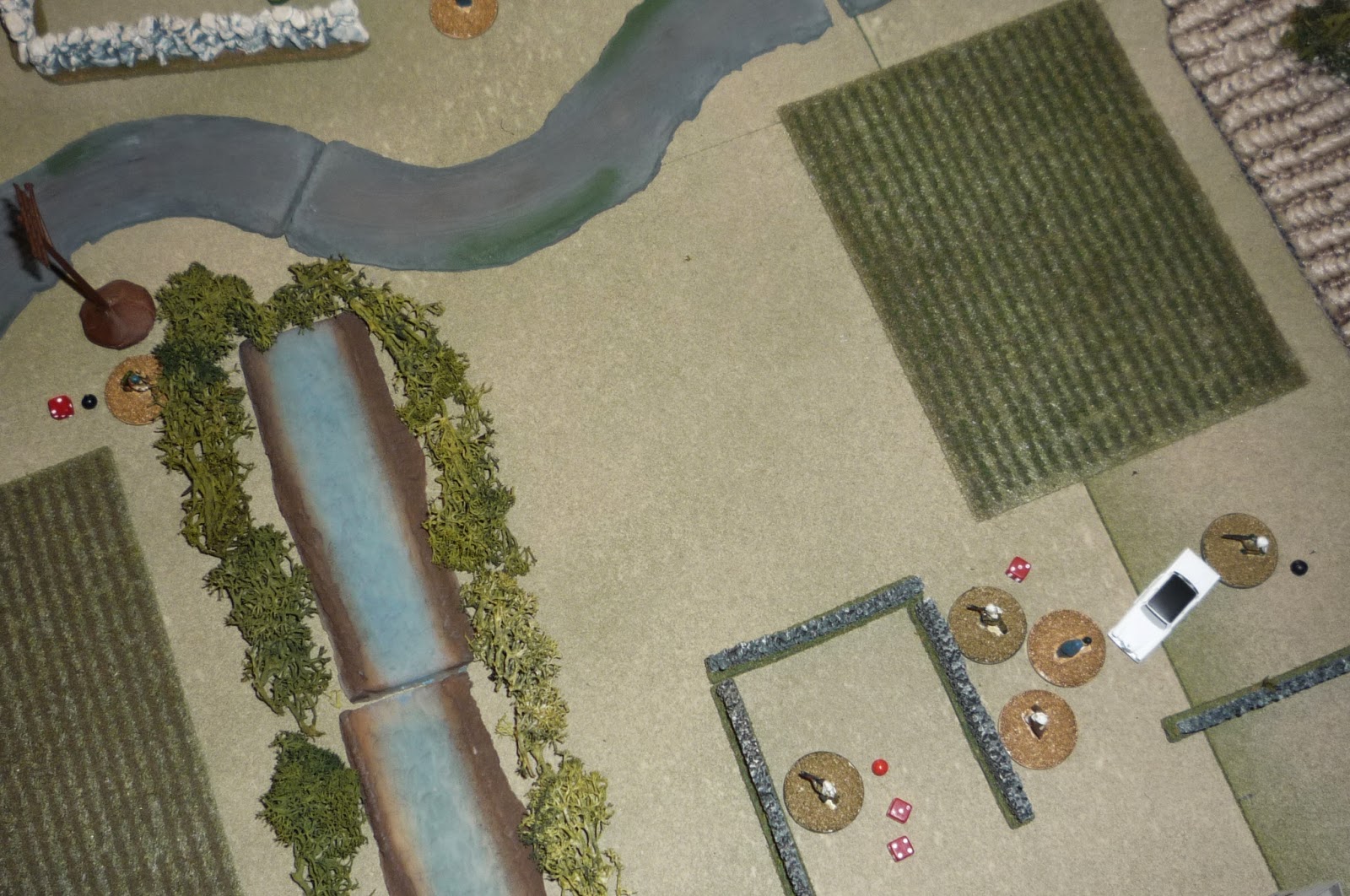 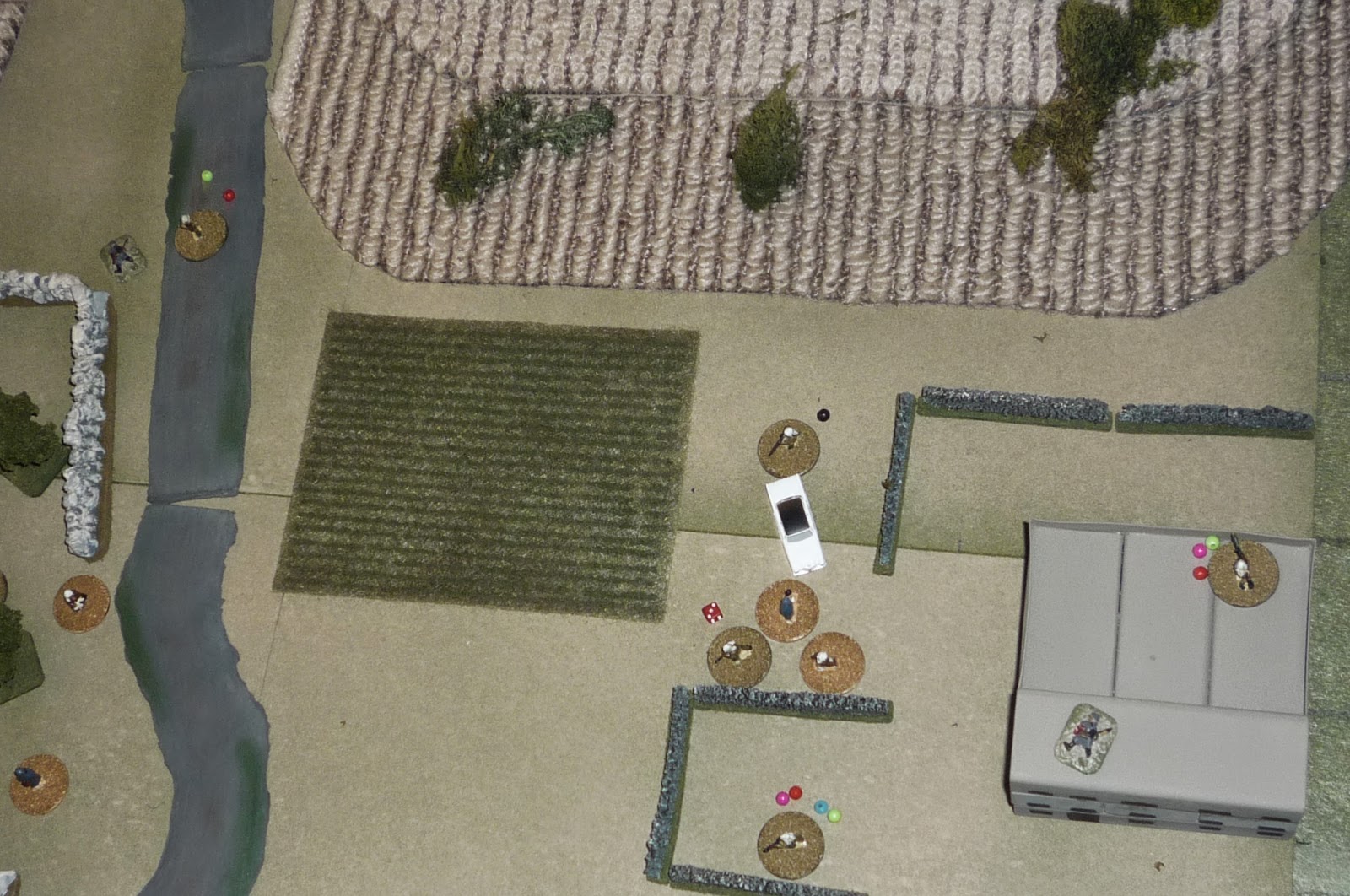 Several Tangos test morale and don't do well, but it doesn't really matter because they are seriously wounded and can't do anything but crawl away anyway (this pic is looking east, southern patrol at right, northern patrol at left). 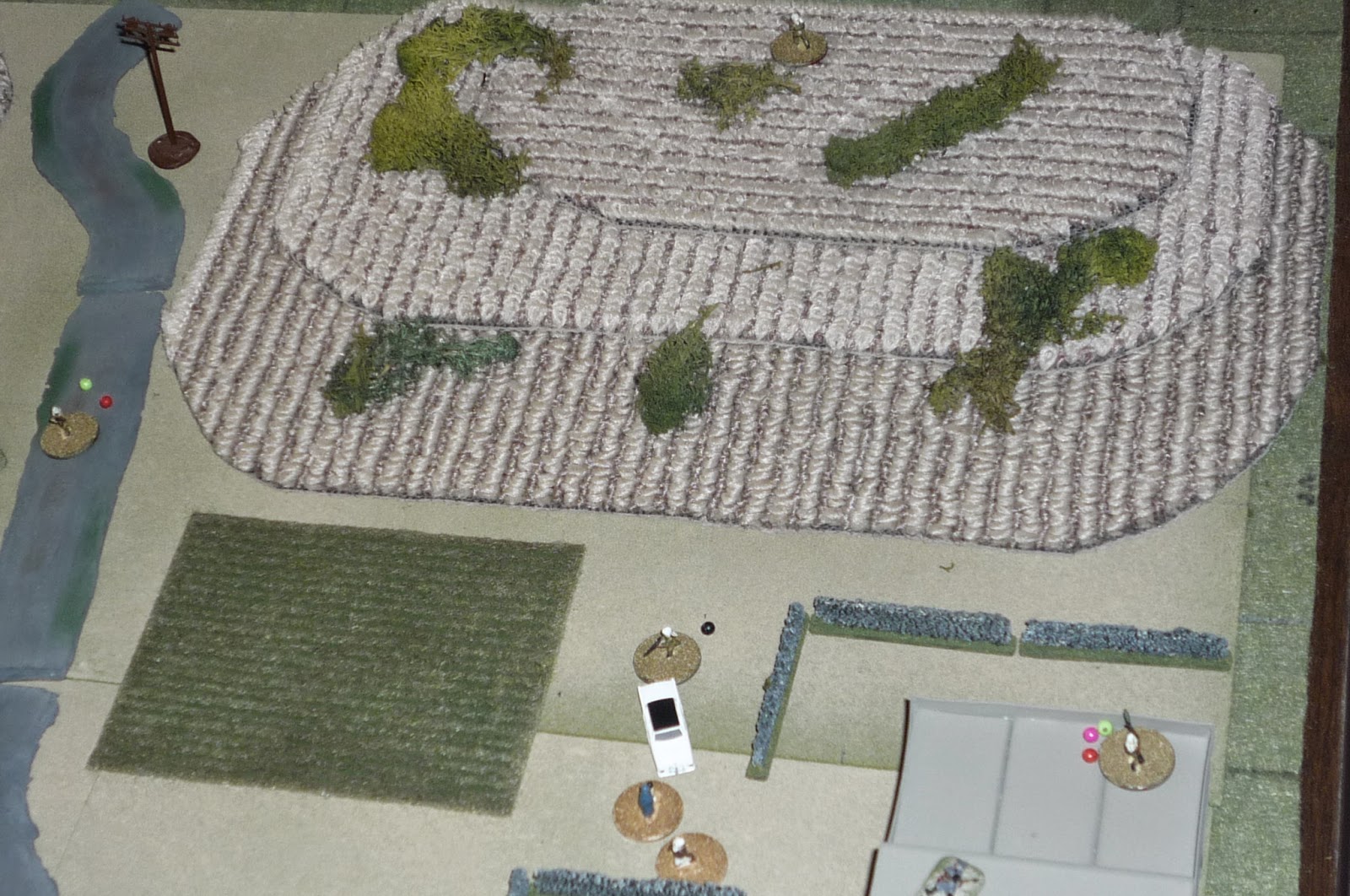 There was an uninjured Tango at the wall at bottom center, near the white car.  He's had a rough time, getting fired at a couple times and watching fellow bad guys get torn up by the JCSOGers.  In the end he just couldn't take it anymore (failed morale test) and ran (top center). 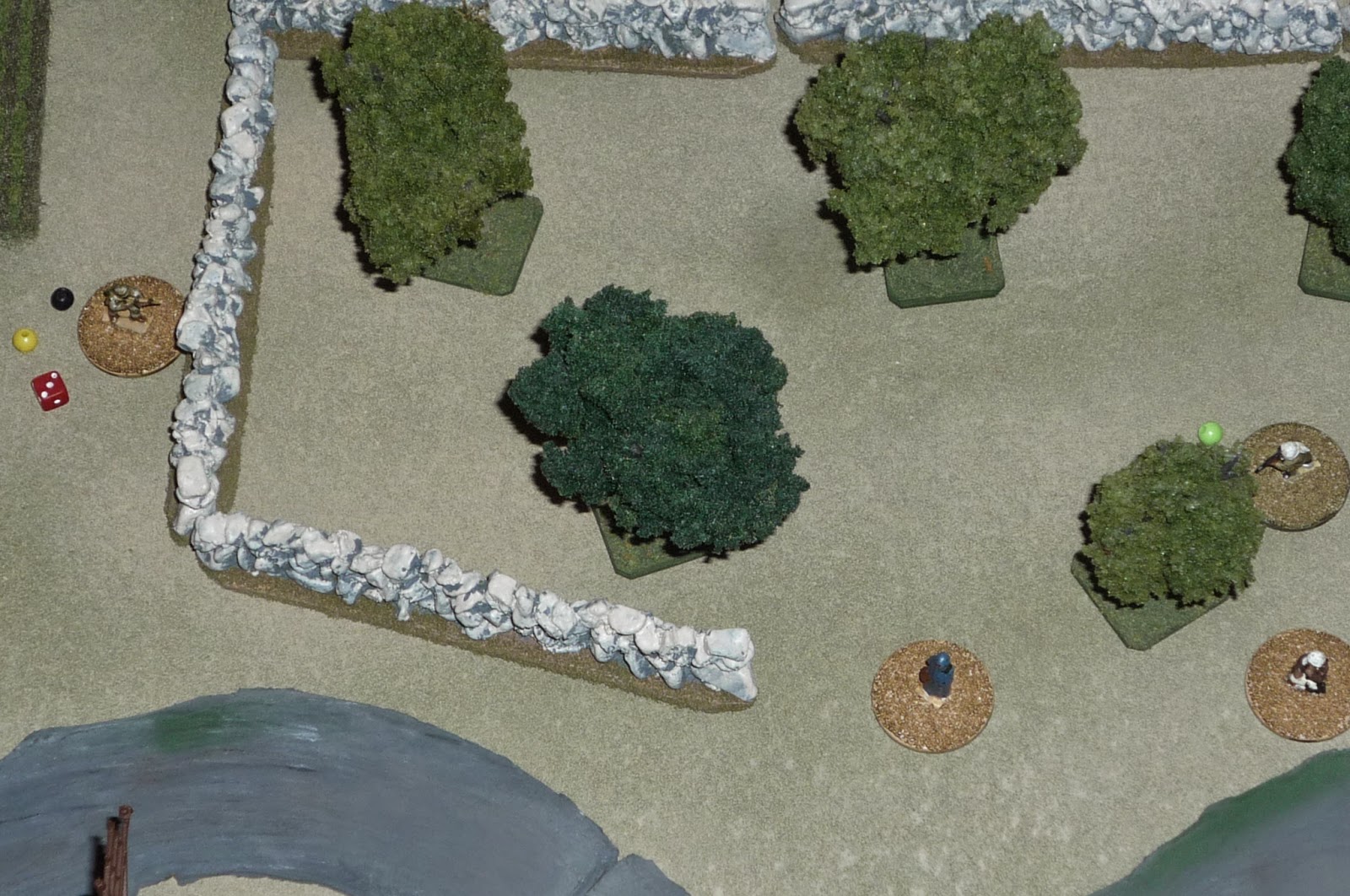 Then a real pisser happened, and I may have screwed up the rules, but it felt right.  Regarding the Tango in the orchard (bottom right), if you recall, Torch had previously moved up, spotted the Tango in the orchard, and taken a shot at him, but Torch was still technically unspotted.  However, the Tango in the orchard needed needed to take a morale test, and he failed, but the result was drop prone and use all actions to fire.  So he did, and he fired wildly in Torch's direction, but he rolled a 20 and Torch ended up with a light wound. 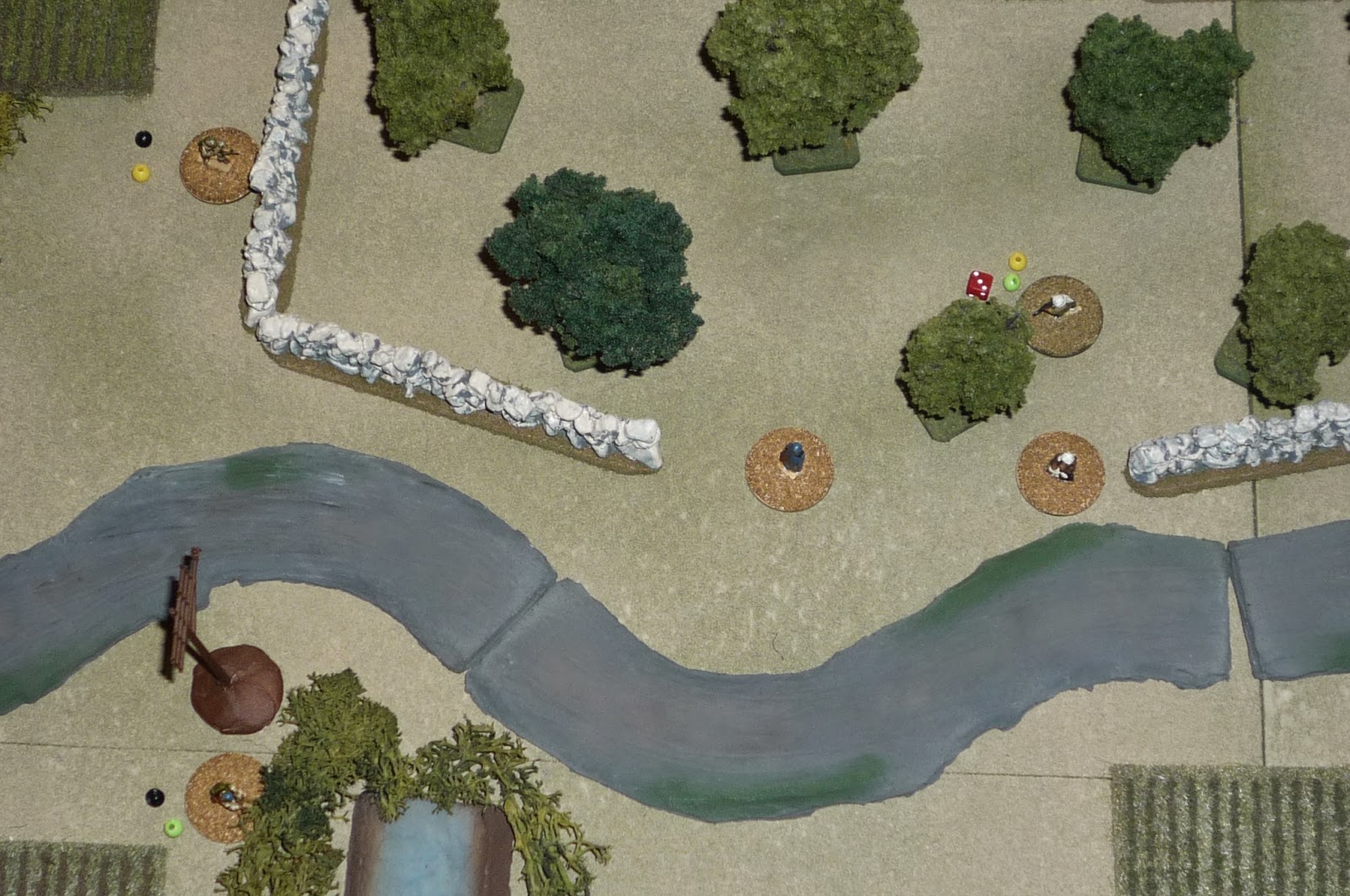 On the other side, Thistle (bottom left) tests morale but fails and drops prone.  Torch (to left) passes his test and opens up on the Tango in the orchard, giving him a light wound. 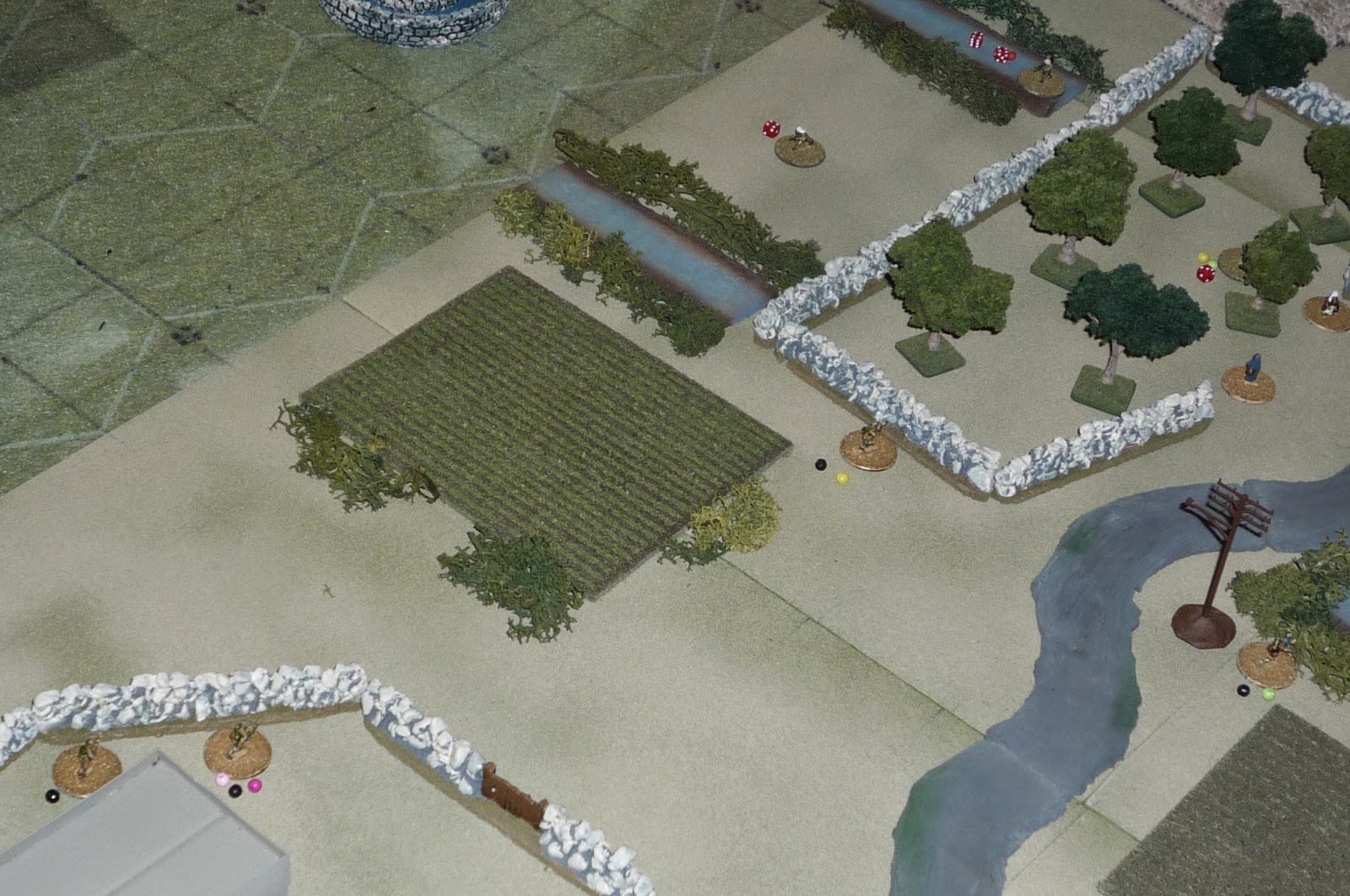 On the JCSOG left, Snapshot (bottom left, with Peso next to him) fires three times at the Tangos at the north canal, missing all three times...  Peso moves over next to him and fires a rifle grenade at the RPG gunner, nailing him but only getting a light wound.  Peso fires his rifle and puts a serious wound on the RPG gunner 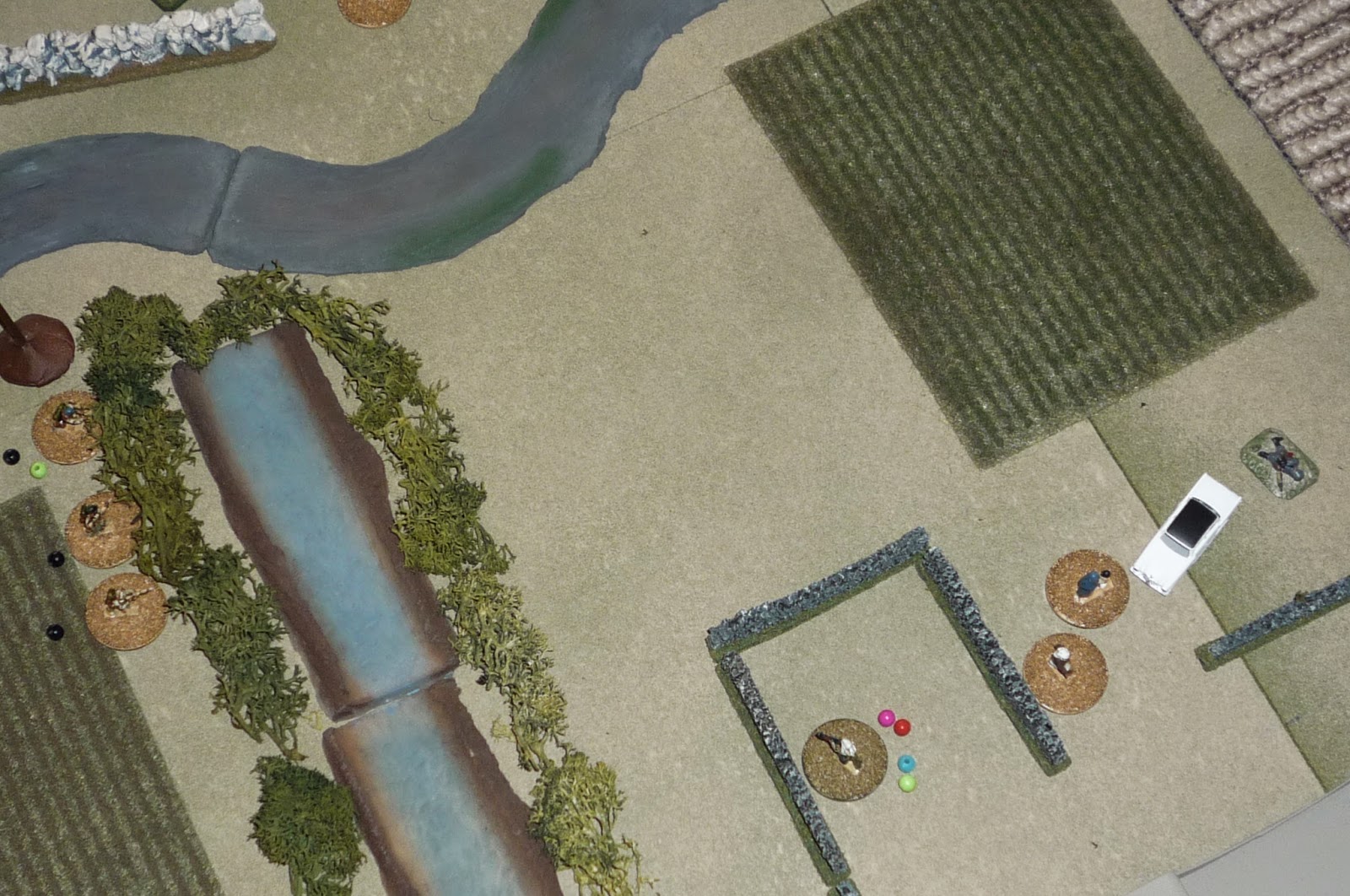 Hammer moves up next to Thistle and Scorecard at the south canal, firing at twice at the Tango at the white car, putting a light wound on him, then Scorecard finishes the job, putting him down. 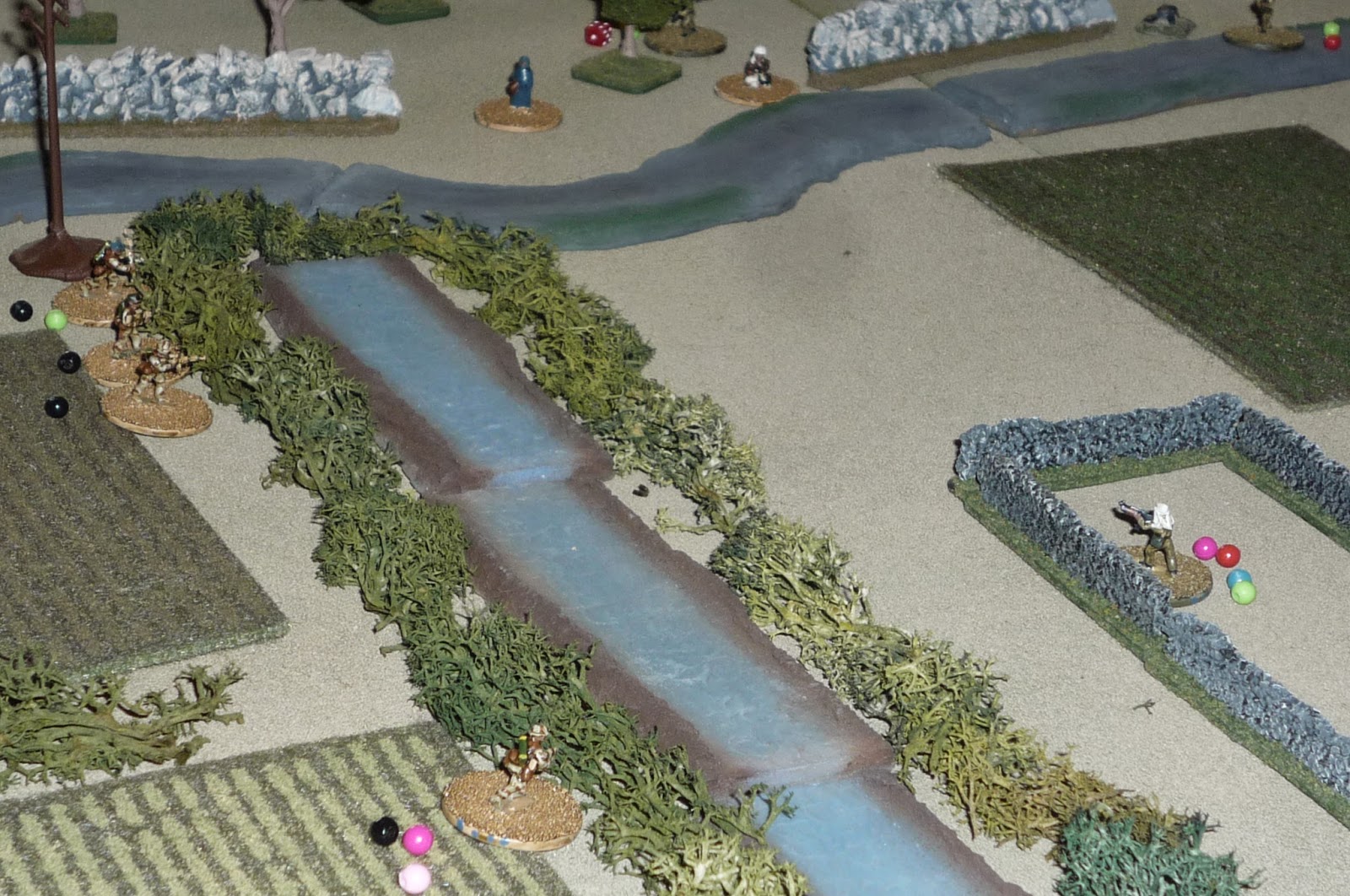 Derby (bottom center, with Thistle/Hammer/Scorecard at top left) hops the wall and moves up to the canal, then fires at the Tango in the orchard, but missed.  If you look at the Tango at center right, the violet bead means he's unspotted, the red means seriously wounded, and the green means he's prone.  Yellow is light wound, black is acted, pink is fired, aqua is saved action, and purple is ran. 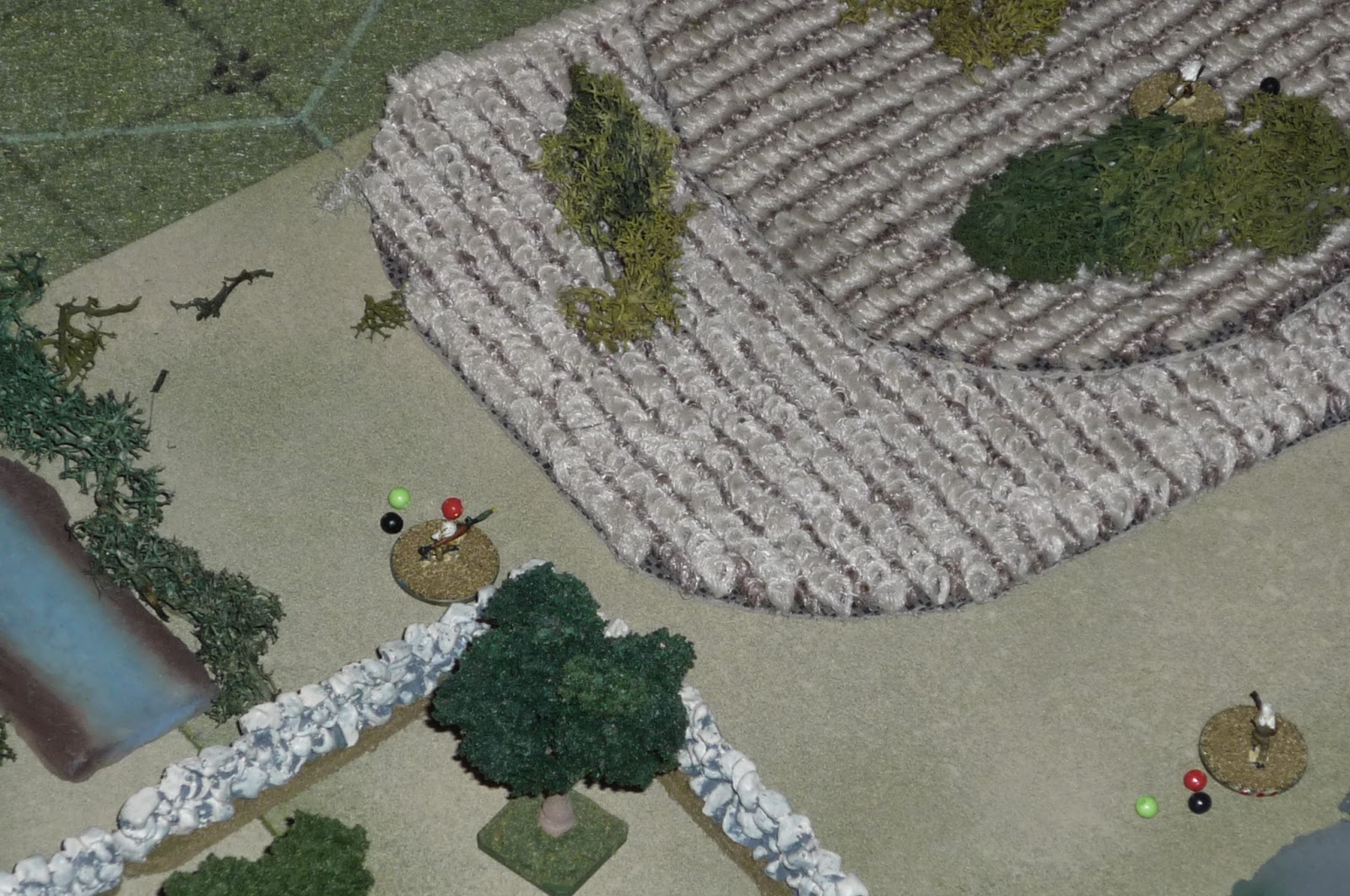 The four seriously wounded Tangos all crawl 2" backwards.  The guy at top left is healthy but failed at this morale test and ran, practically vaulting the north canal (bottom left) and stepping right in the middle of the RPG gunner's back on his race to leave town.  With that the only semi-healthy (lightly wounded) guy left was the Tango in the orchard, and he decided to join his companions.

With that, the JCSOGers made their way to the HLZ for extraction.  Another successful mission, but the JCSOGers can't help but wonder if their run-in with the Ir-Habein terrorists was a coincidence, or were they aware of JCSOG's presence?