My 3mm Desert Force, So Far

After a bunch more painting, I'm ready to unveil my modern 3mm desert force.  I say 'so far,' because I'm about as done as I think I need to be with the bad guys (generic Arab forces using Warsaw Pact equipment), but I need to put in another order to Picoarmor to finish off my Israelis, and I have a boatload of US stuff yet to be painted.  Nevertheless, I've got quite a bit done so far, so I wanted to show it off. 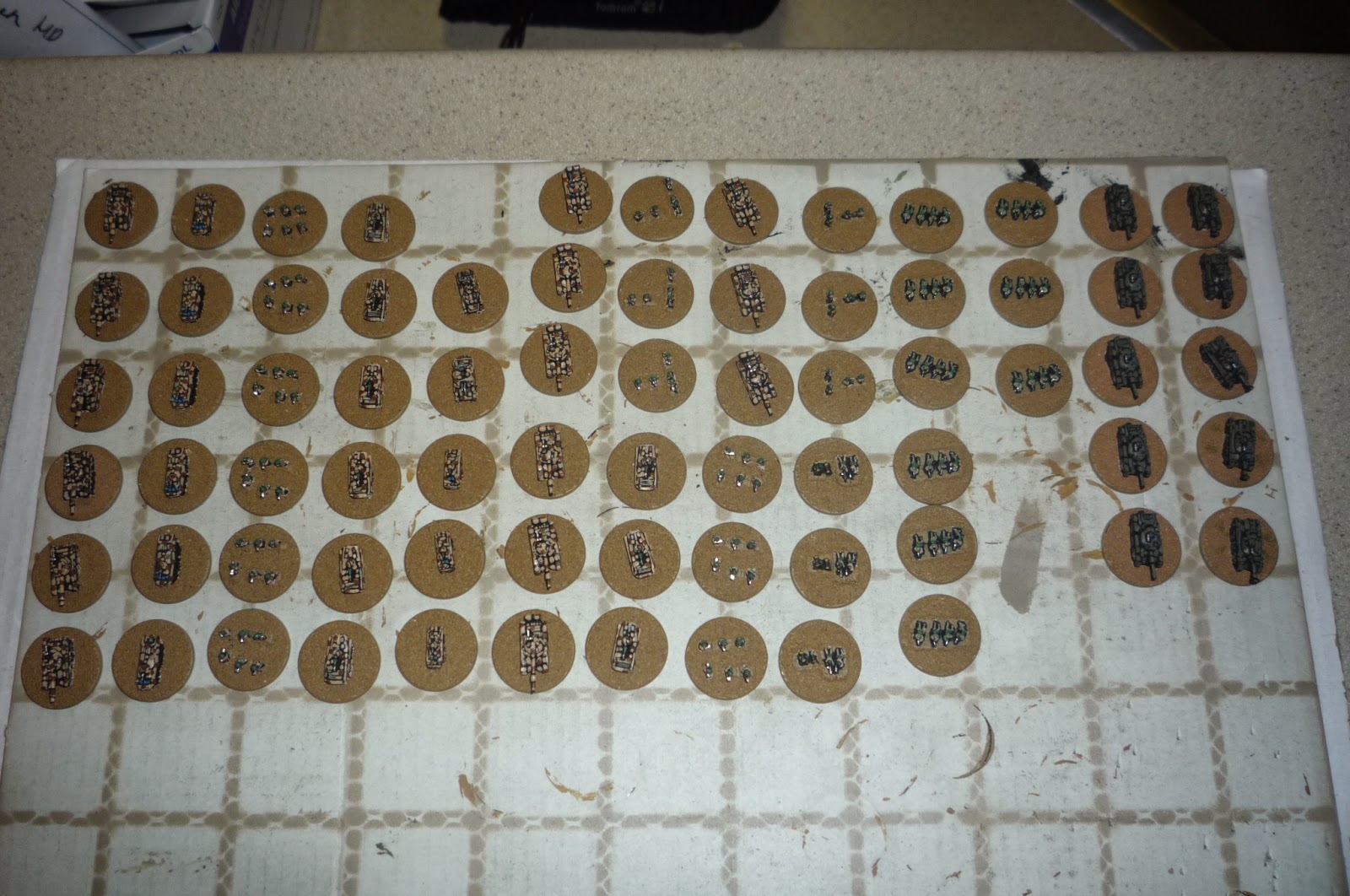 Israeli M-48s.  I'm showing them again, because now they're finished, that is, I've 'edged' them, and put unit identifiers on them, as seen at far left, with five blue dots.  I like it, much less visually intrusive than the sort of stuff I'd been doing.  Not sure why it hadn't occurred to me before... 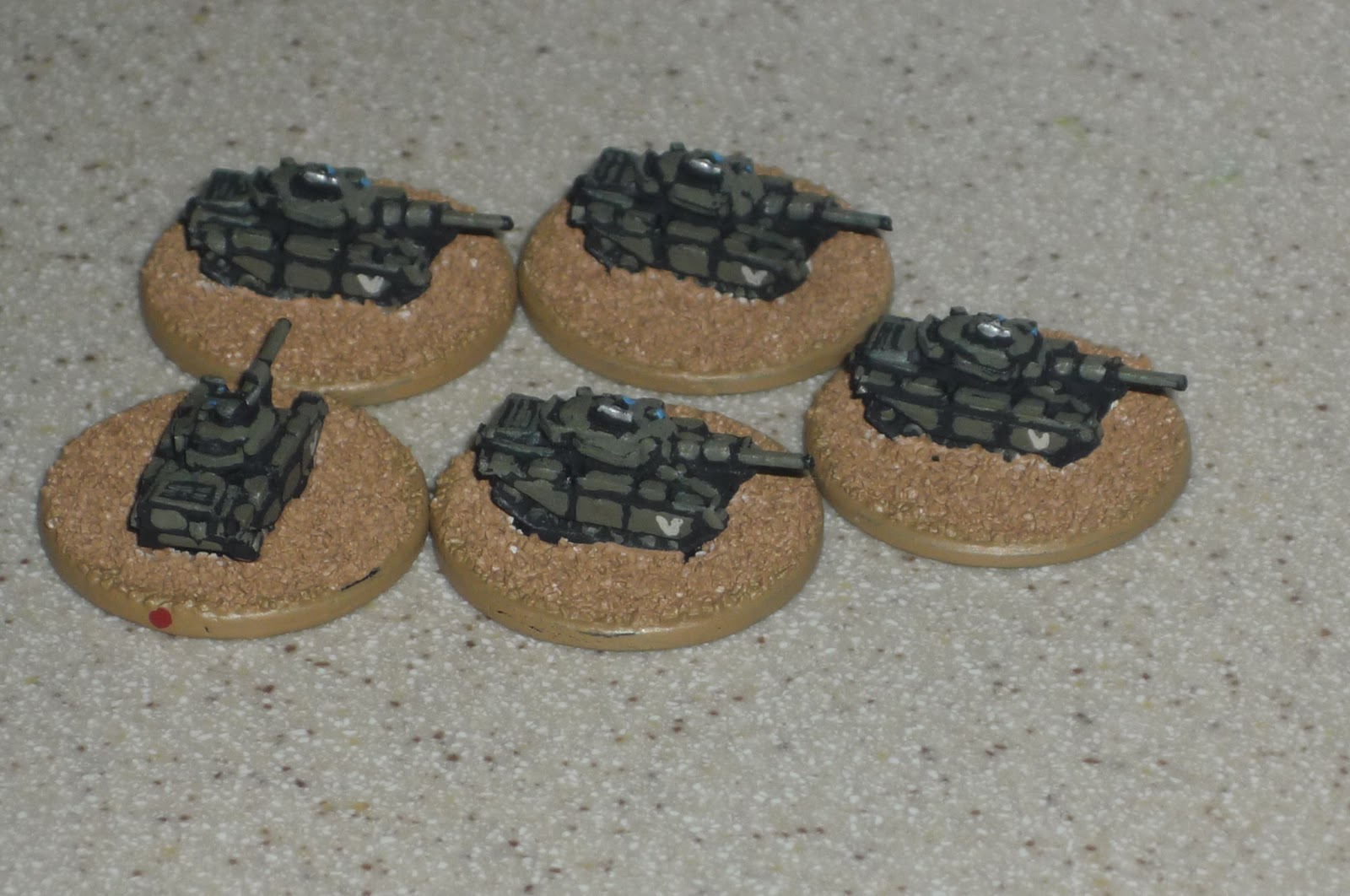 Israeli Centurions, AKA, Sho't Kals (or something like that).  There are five of them because I intend on going '1 to 1,' that is, one base is one tank, so this is a five-tank platoon. 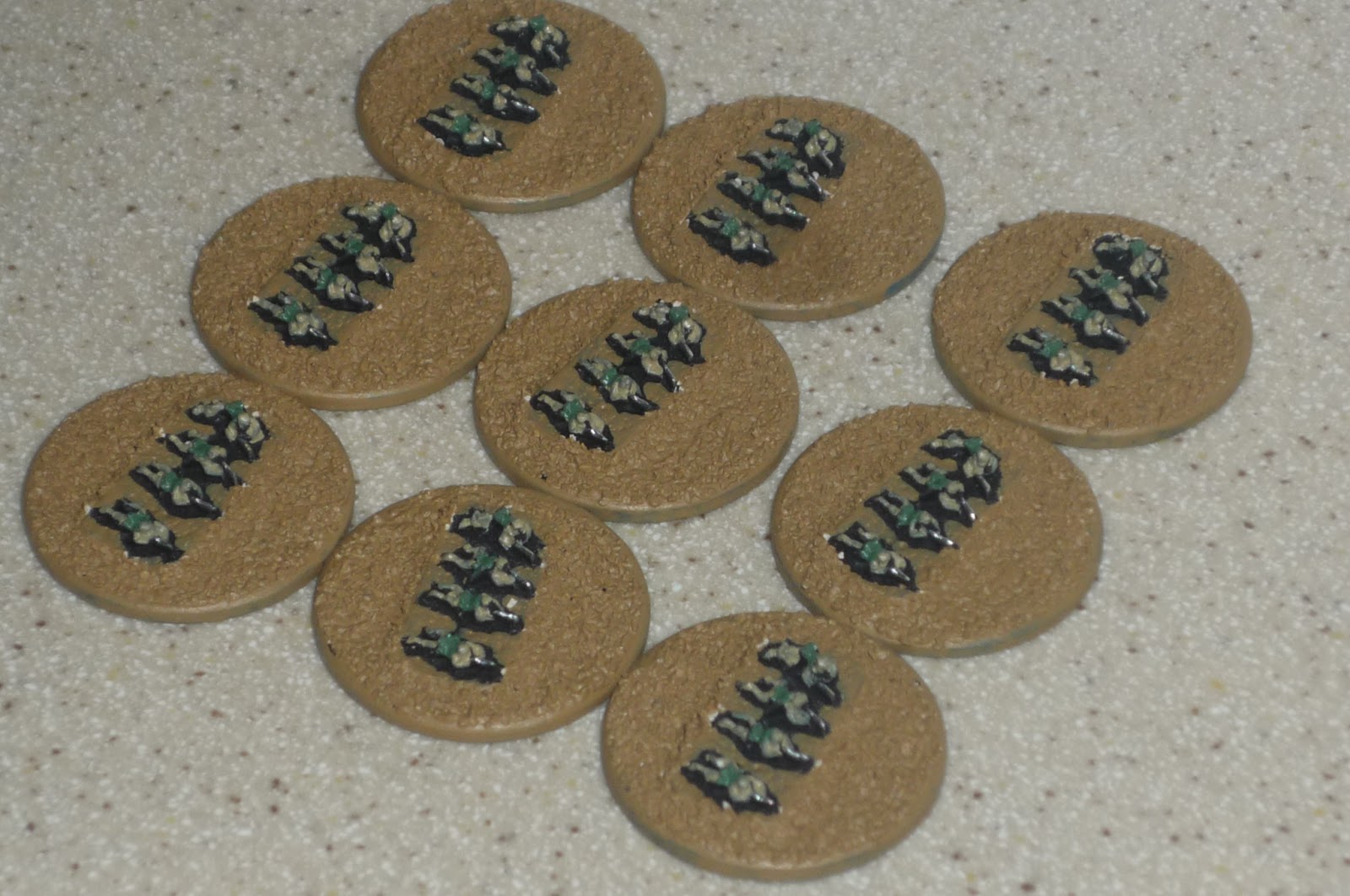 "Good-Guy" infantry, using Picoarmor's US infantry.  I think when I'm playing Israelis vs. Arabs these will be squad stands, but when I'm doing my USMC MEU-stuff they will be fireteam stands.  So far I've only done rifle teams.  I need to put in another order for more of these (I need to do up temperate climate troops as well), as well as mortars, machine guns, and more ATGMs. 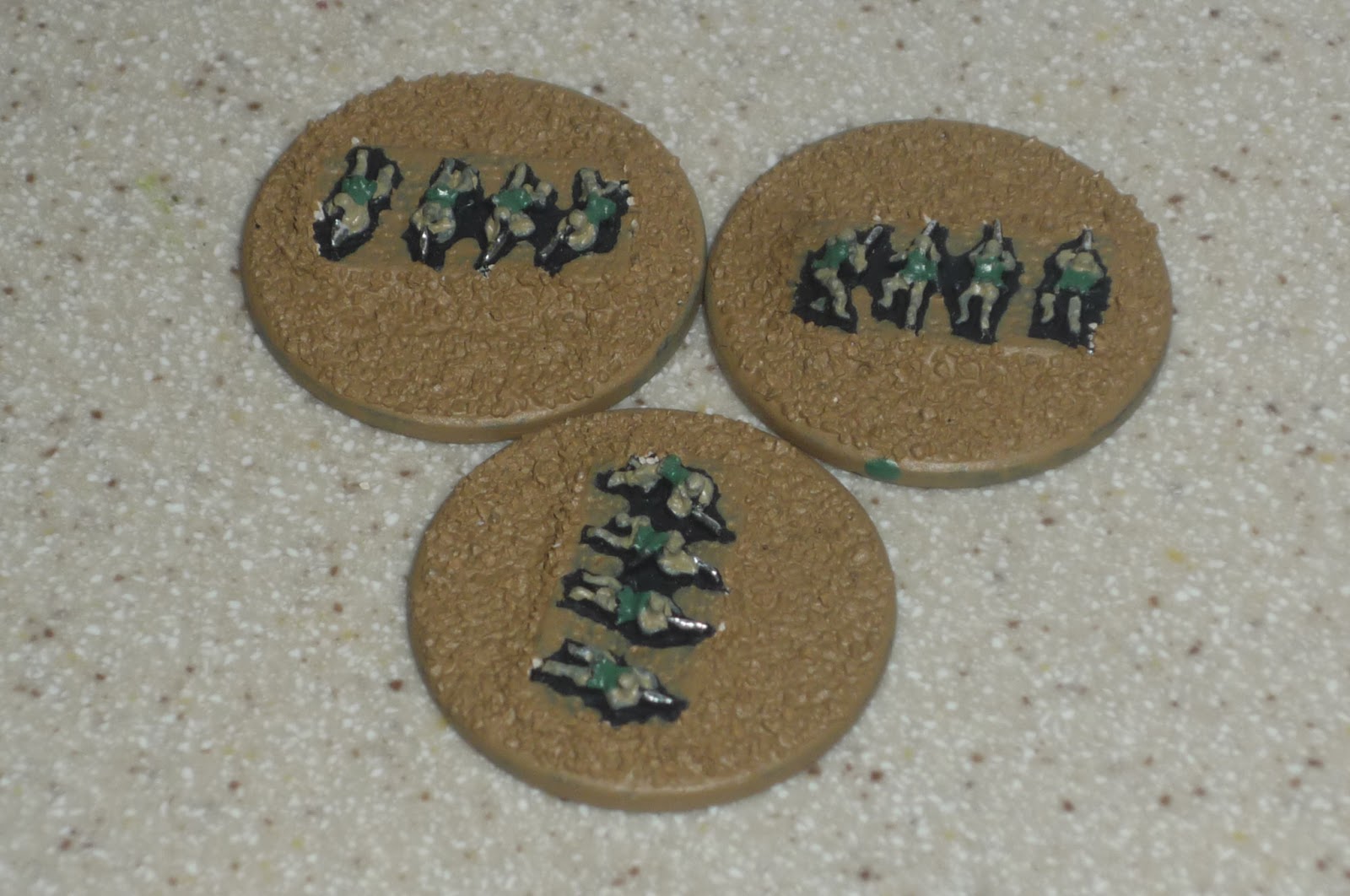 A closeup of the good guy infantry.  My camera is pretty crappy, but trust me, these sculpts, at 3mm, are truly incredible.  The detail is there, the only question is if your eyes are good enough to make it out, and your hand steady enough to pick it out.  I know what you're thinking; "aww, you can never see that stuff on the table."  Yes, I can, because I'm going to be sitting down at the coffee table playing on a 2' x 2' or 3' x 2' board, where I can actually make out the different types of vehicles. 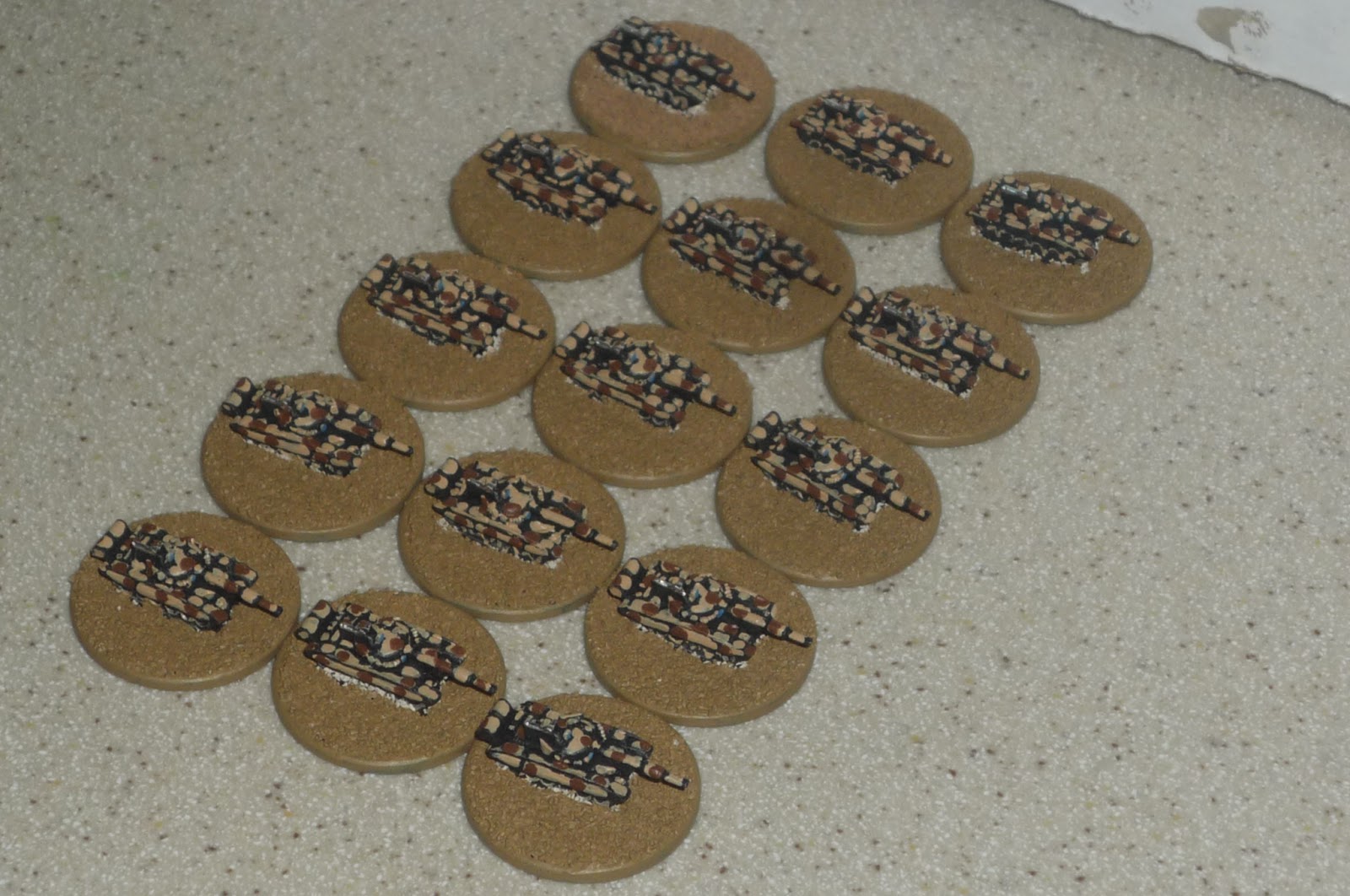 Bad guy T-72s, fifteen of them set up in five three-tank platoons (I'm not worrying about company commander tanks, at least not yet).  I've got two different types of T-72s in the force. 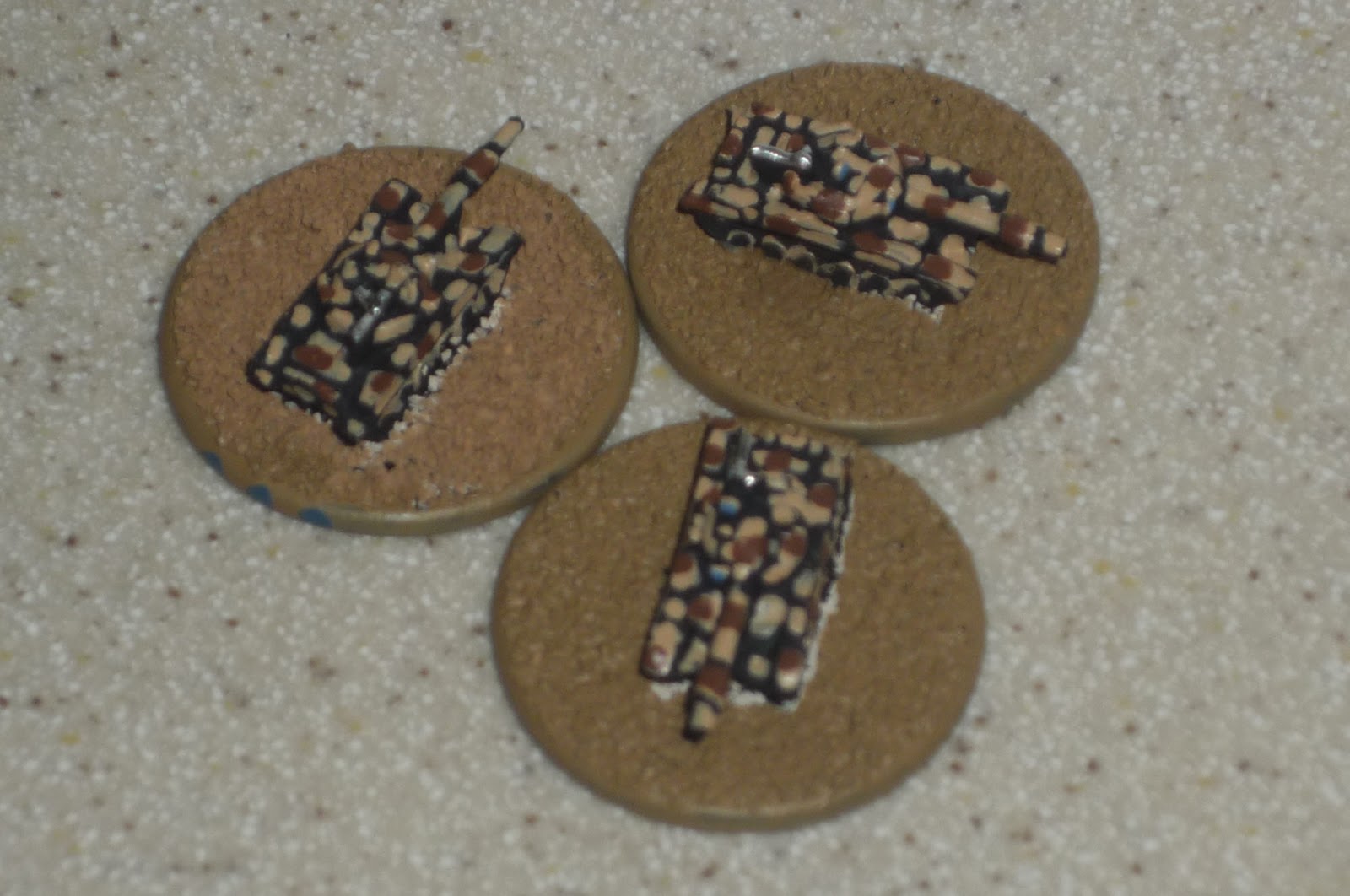 Here's a closeup of the first type of T-72 (forgive me, I can't recall which one it is). 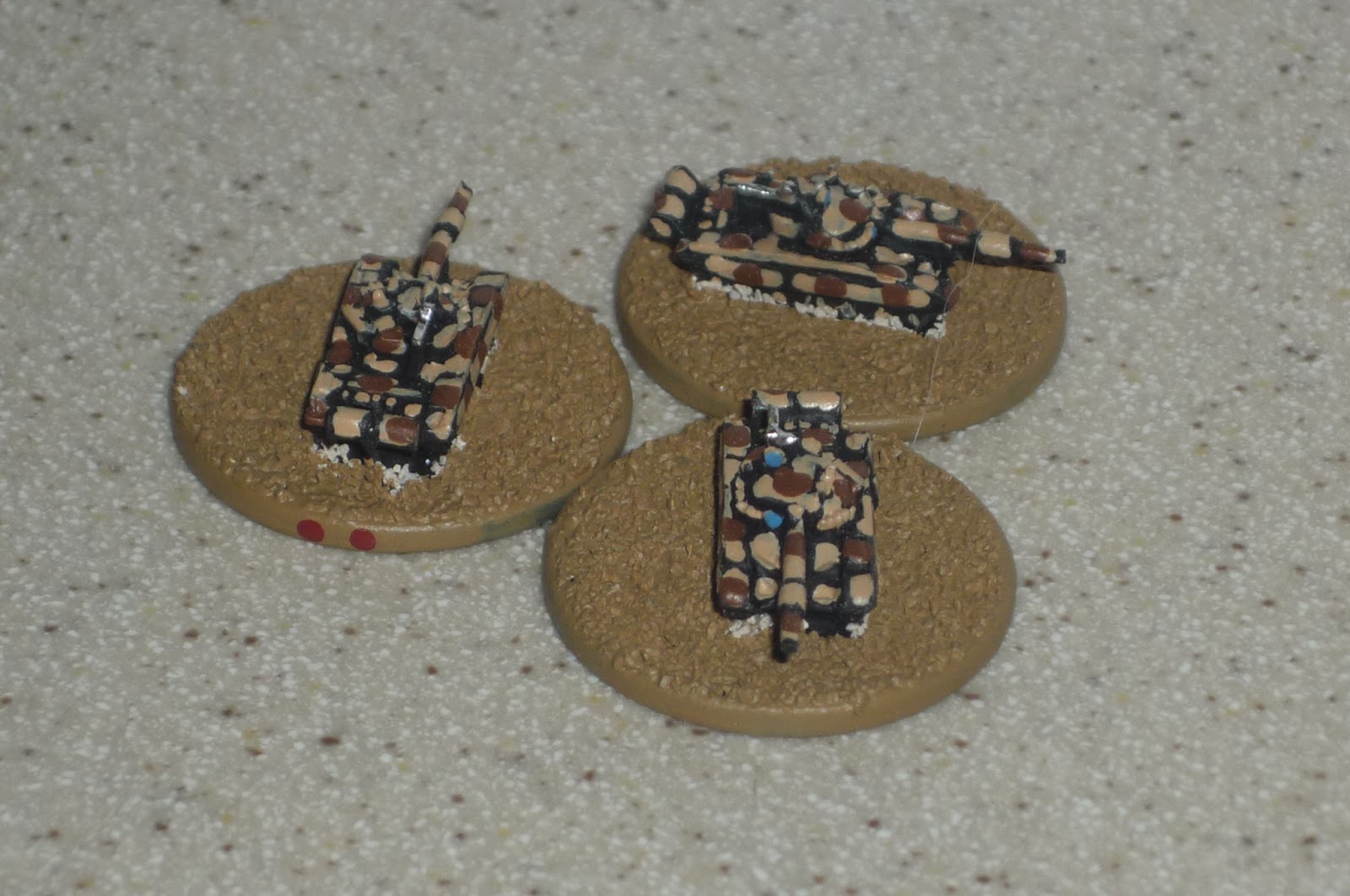 Here's the other.  For my purposes they are identical in terms of how they're handled in the rules. 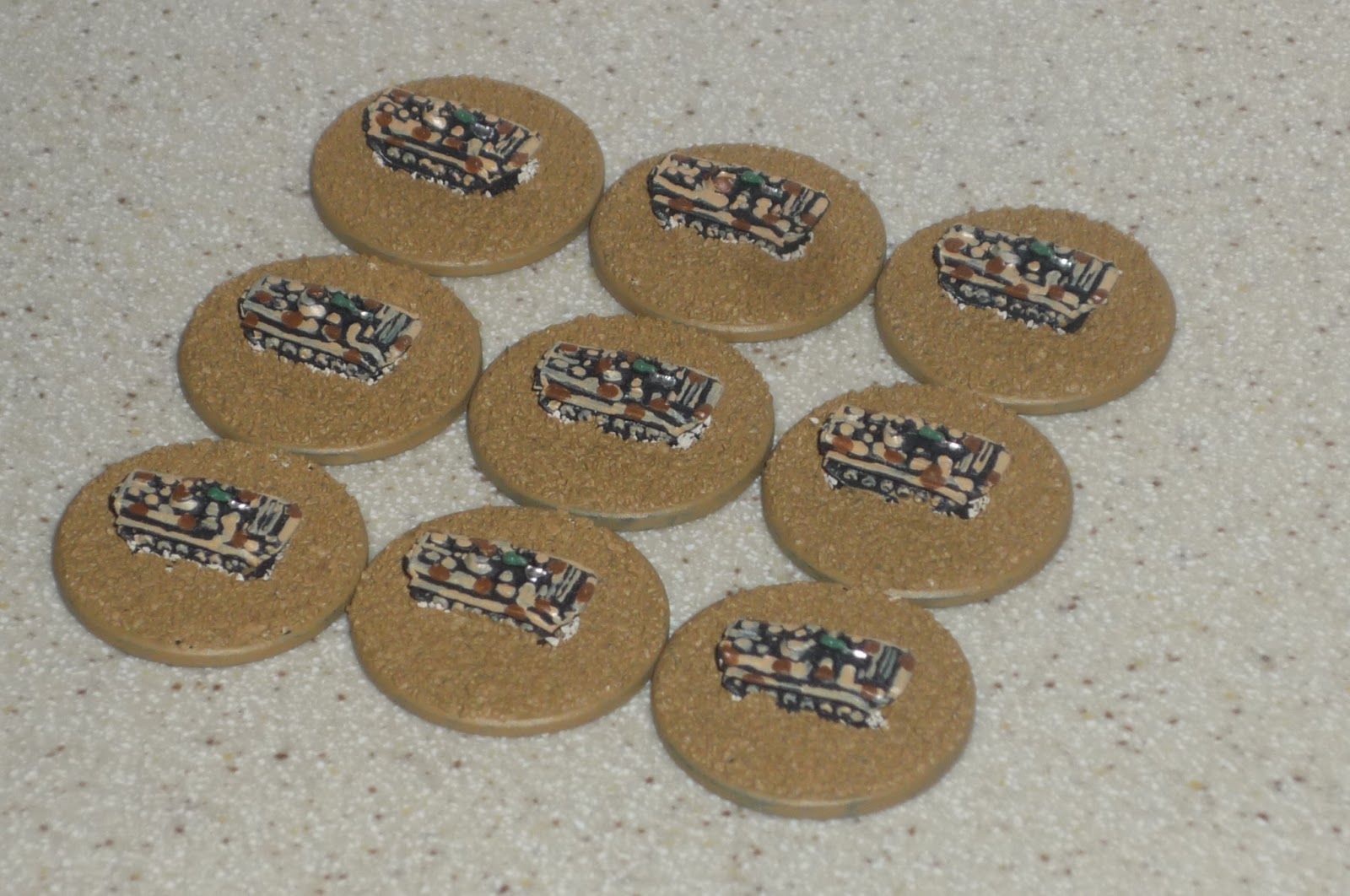 BMP-1s.  I thought long and hard about what to do here, that is, which type of BMP to order.  The issue is that I want to game from the late 60s to pretty much know (2014, for future prosperity).  I could have ordered several of all three, BMP-1s, 2s, and 3s, but that would have been a pain in the ass insofar as I would lose some versatility.  So, I did what I always do, and went with the 'close enough' approach: one type for the whole period.  It would probably have been more appropriate to split the difference and go with the BMP-2, but to me the BMP-1 is the iconic bad-guy APC, so that's what I went with. 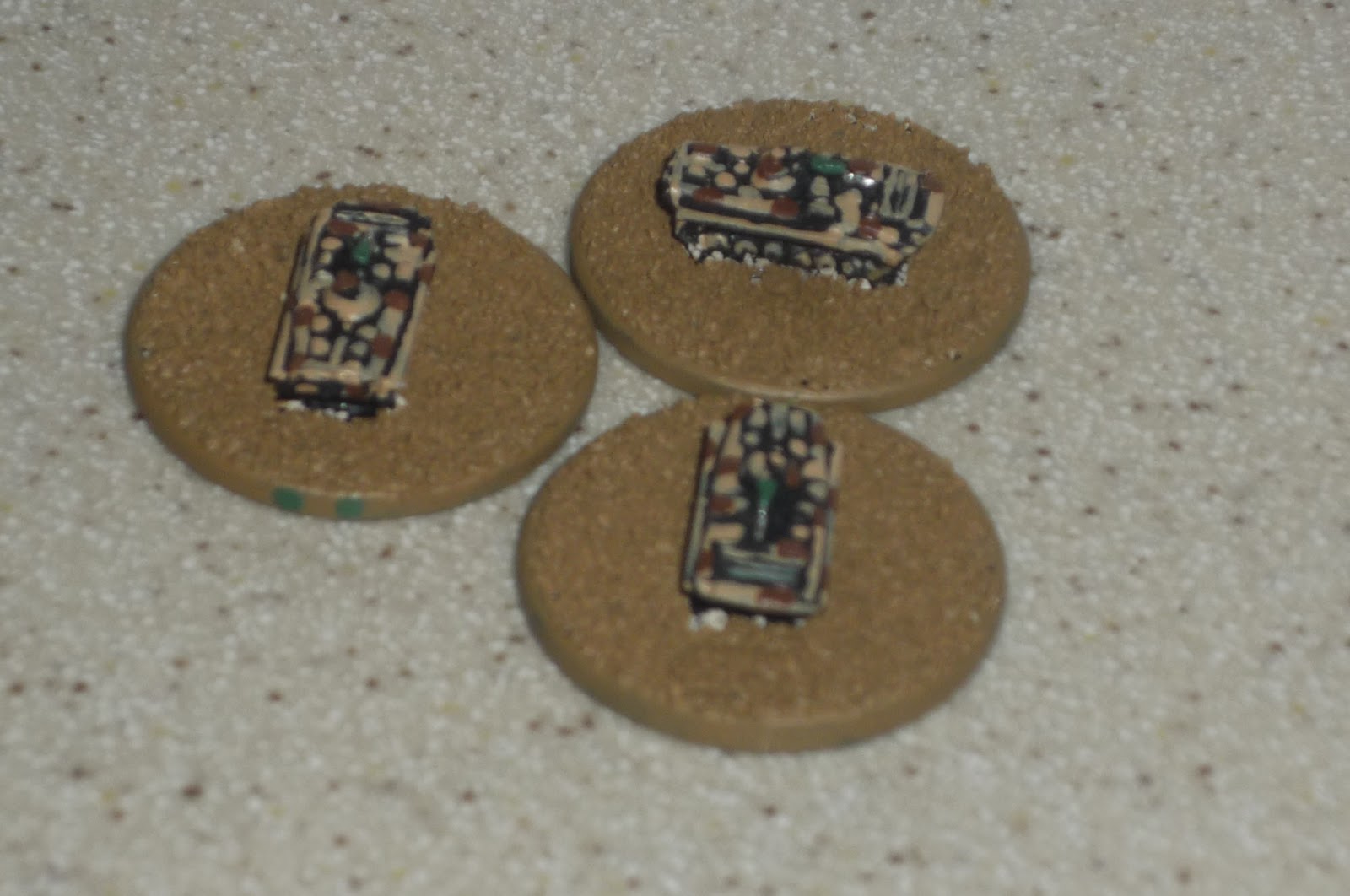 Close up of my BMP-1s.  As usual with small caliber weapons, I painted the gun barrel silver.  I wasn't sure what to do with the missile; I like to use big contrasts, so I went with a bright green, which actually stands out more in real life than it is in these photos. 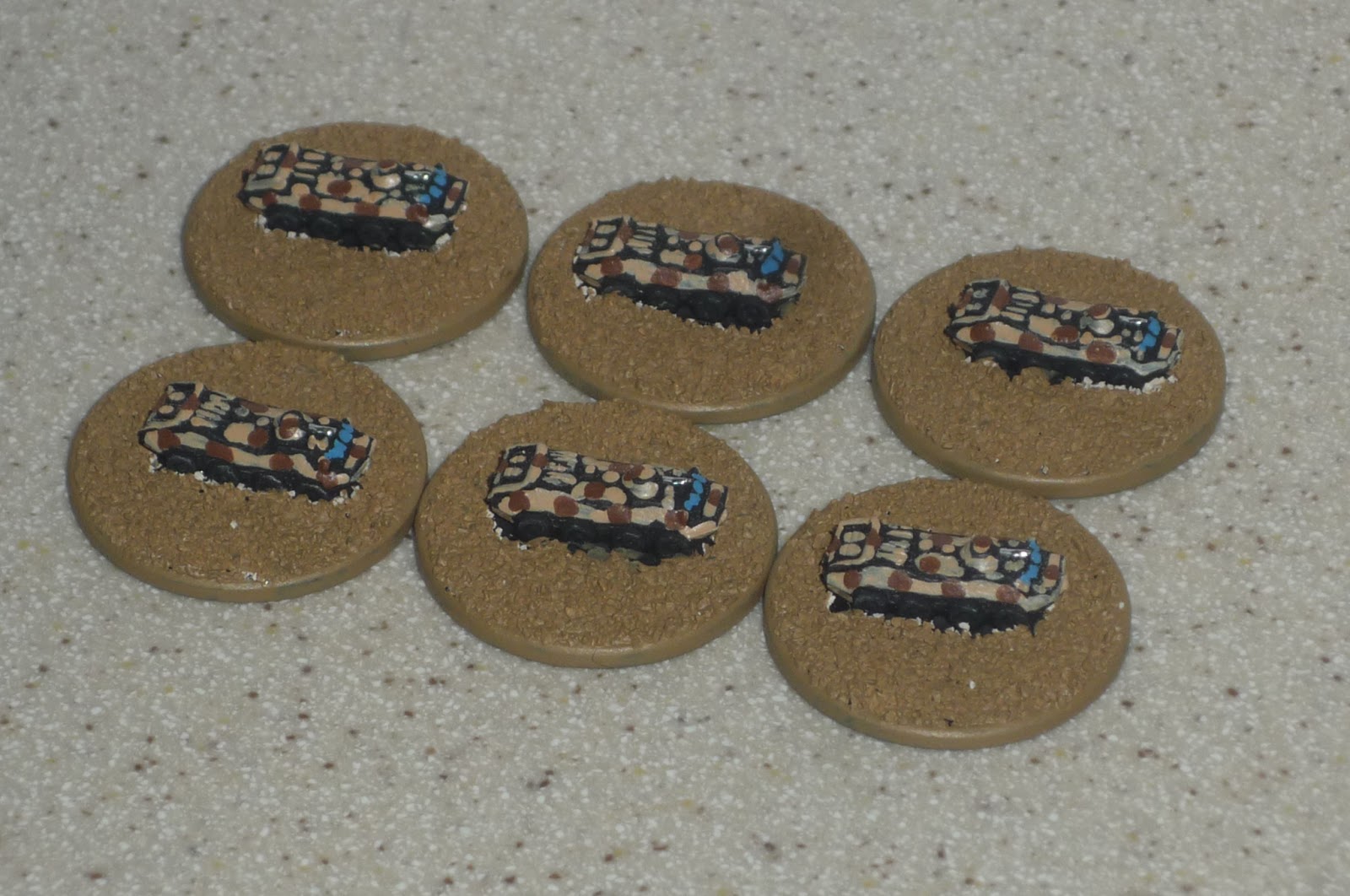 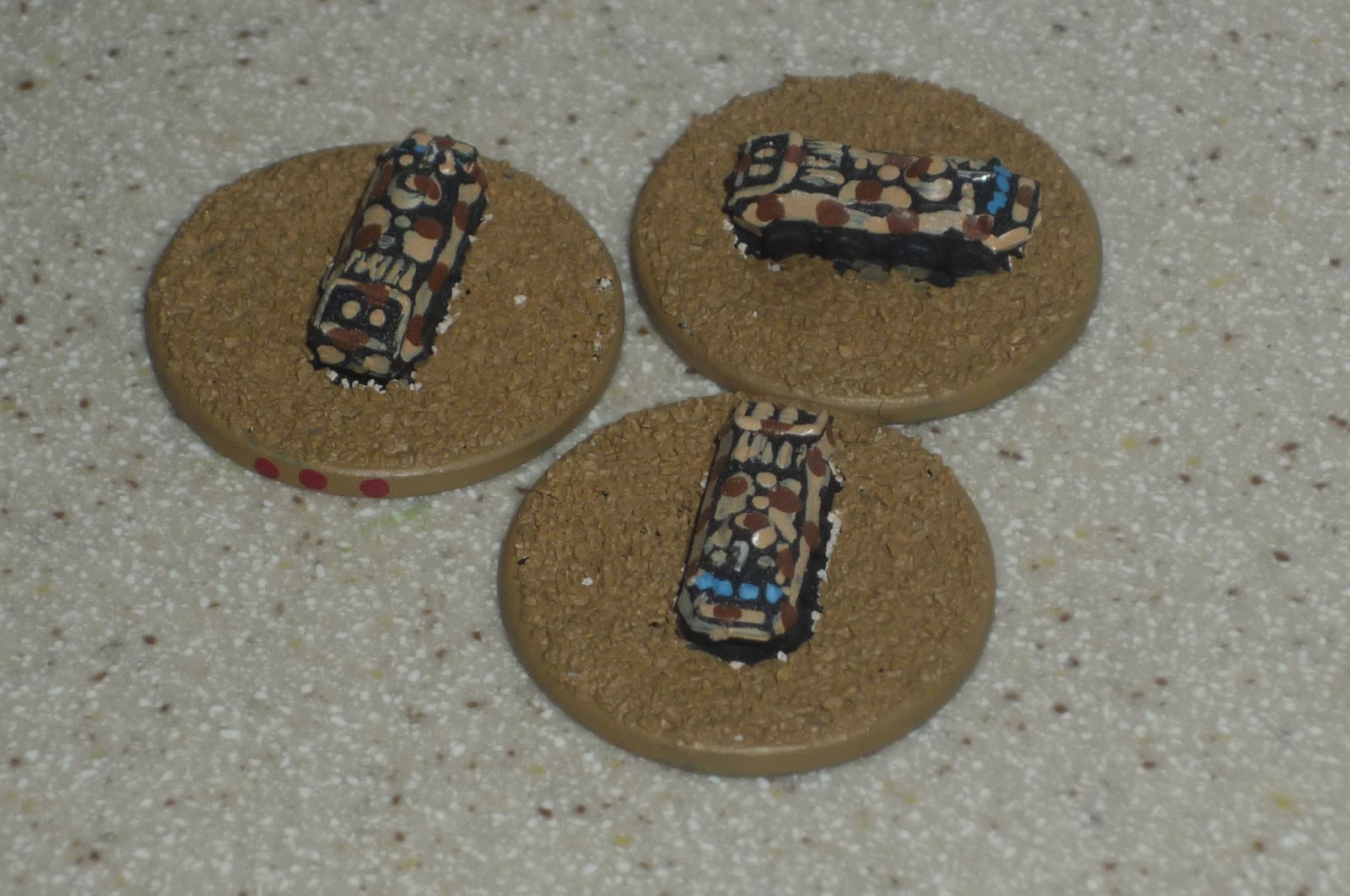 Closeup of the BTR-60s.  The blue really stands out in these photos, but it's not that bad in real life.  In any case, I like colors that 'pop,' particularly on these tiny vehicles. 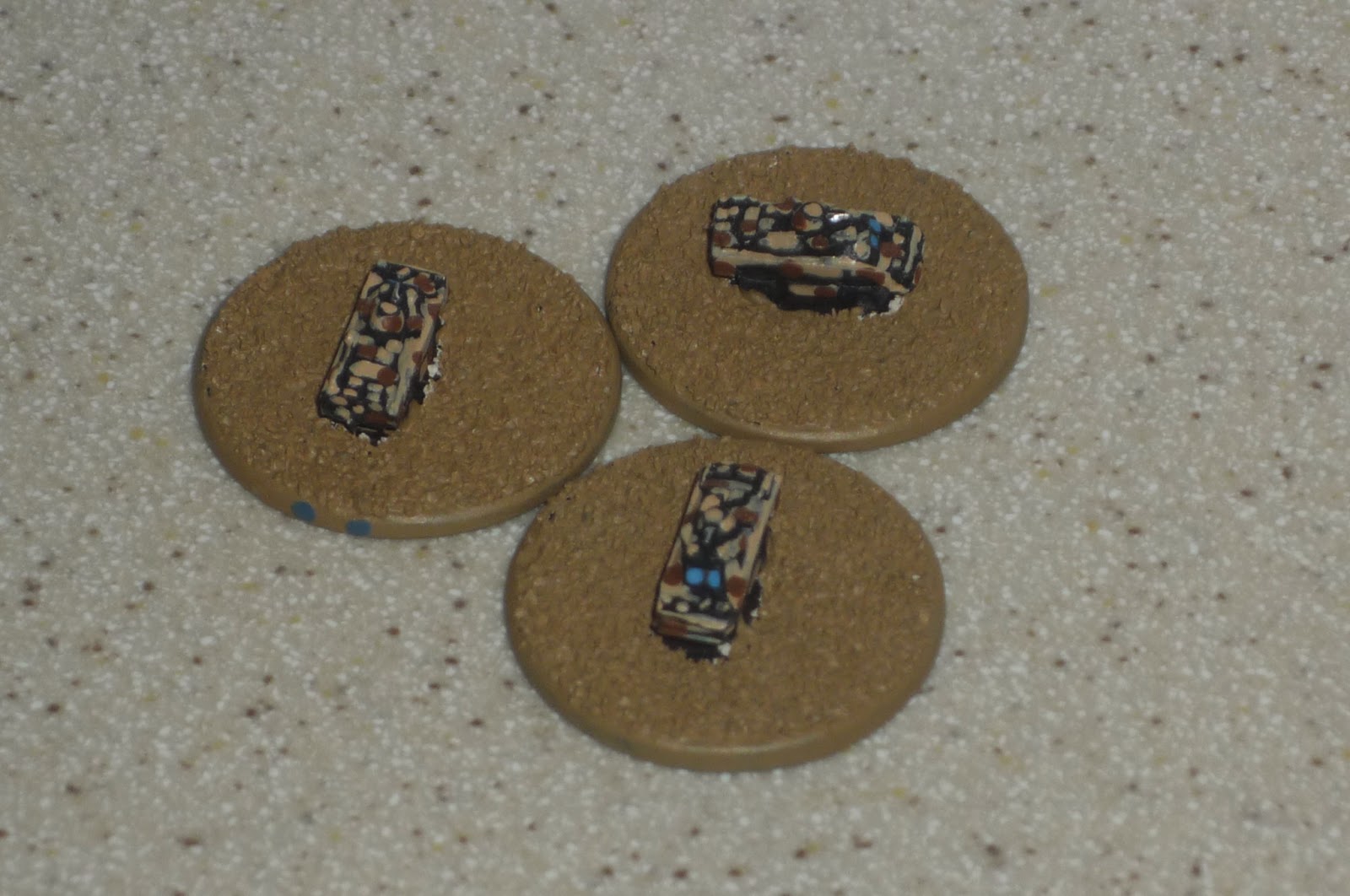 BRDM-1s, comprising the three-vehicle reconnaissance platoon.  I may get some BRDM-2s to have mobile ATGMs on the table. 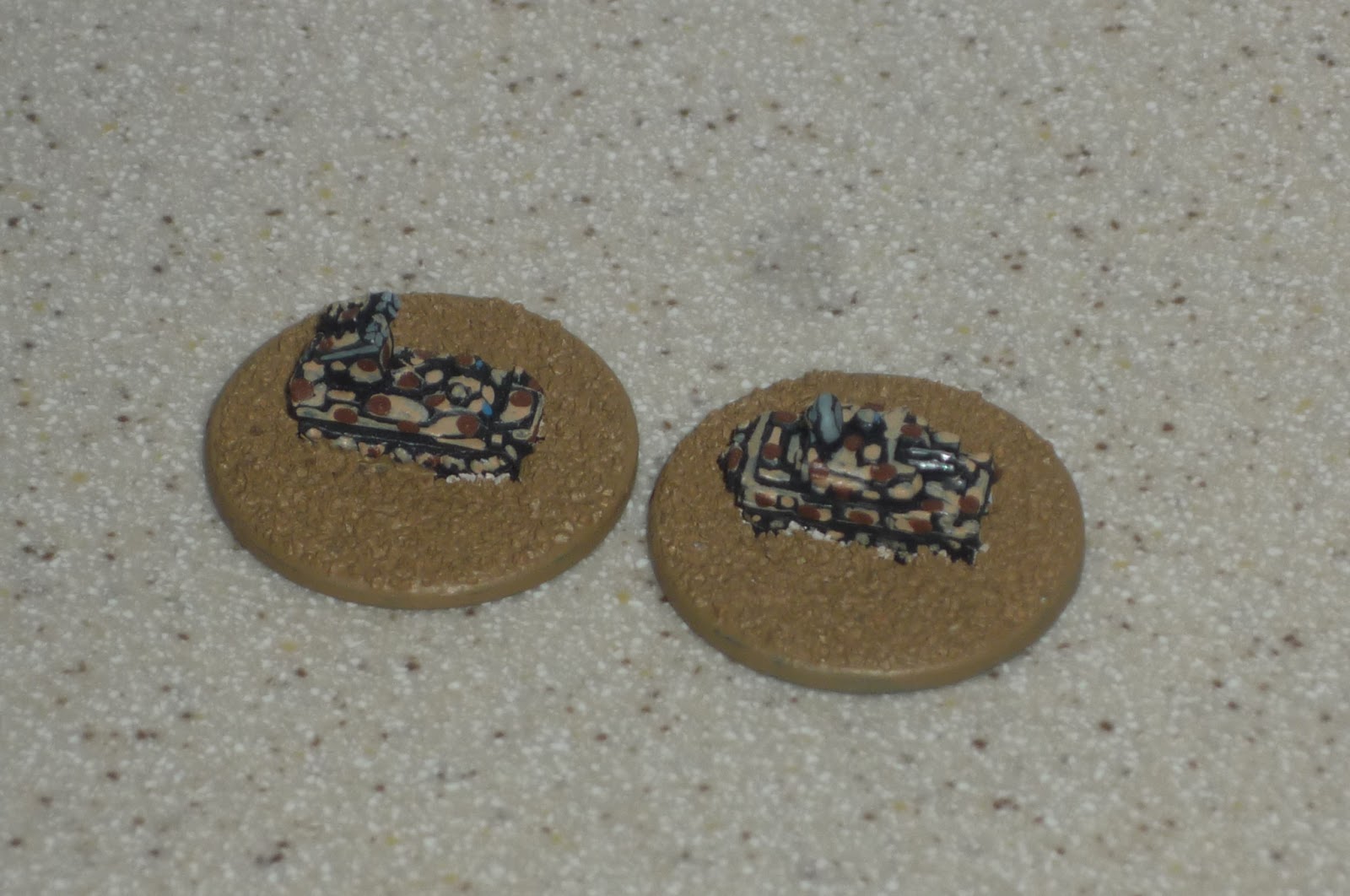 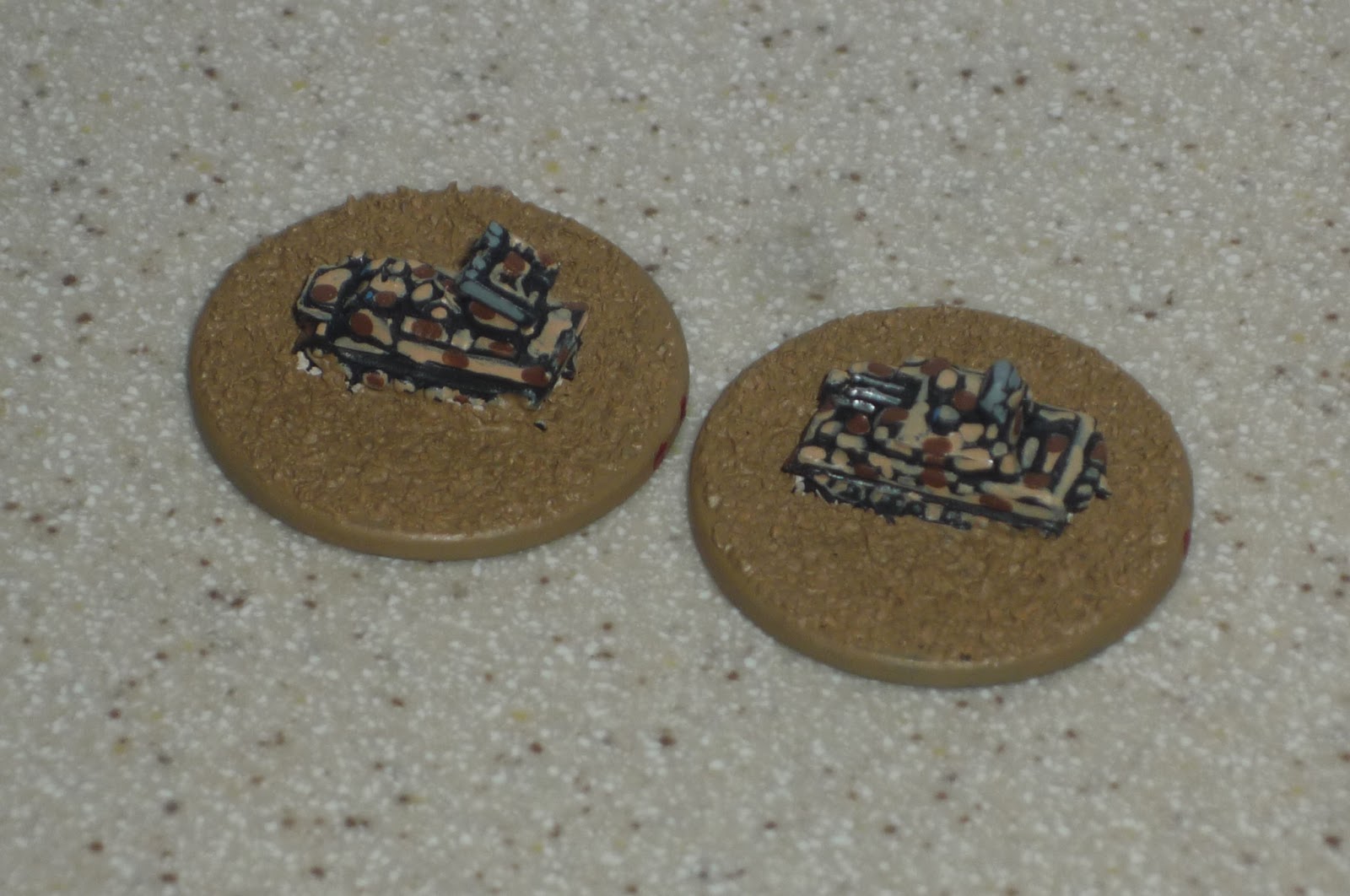 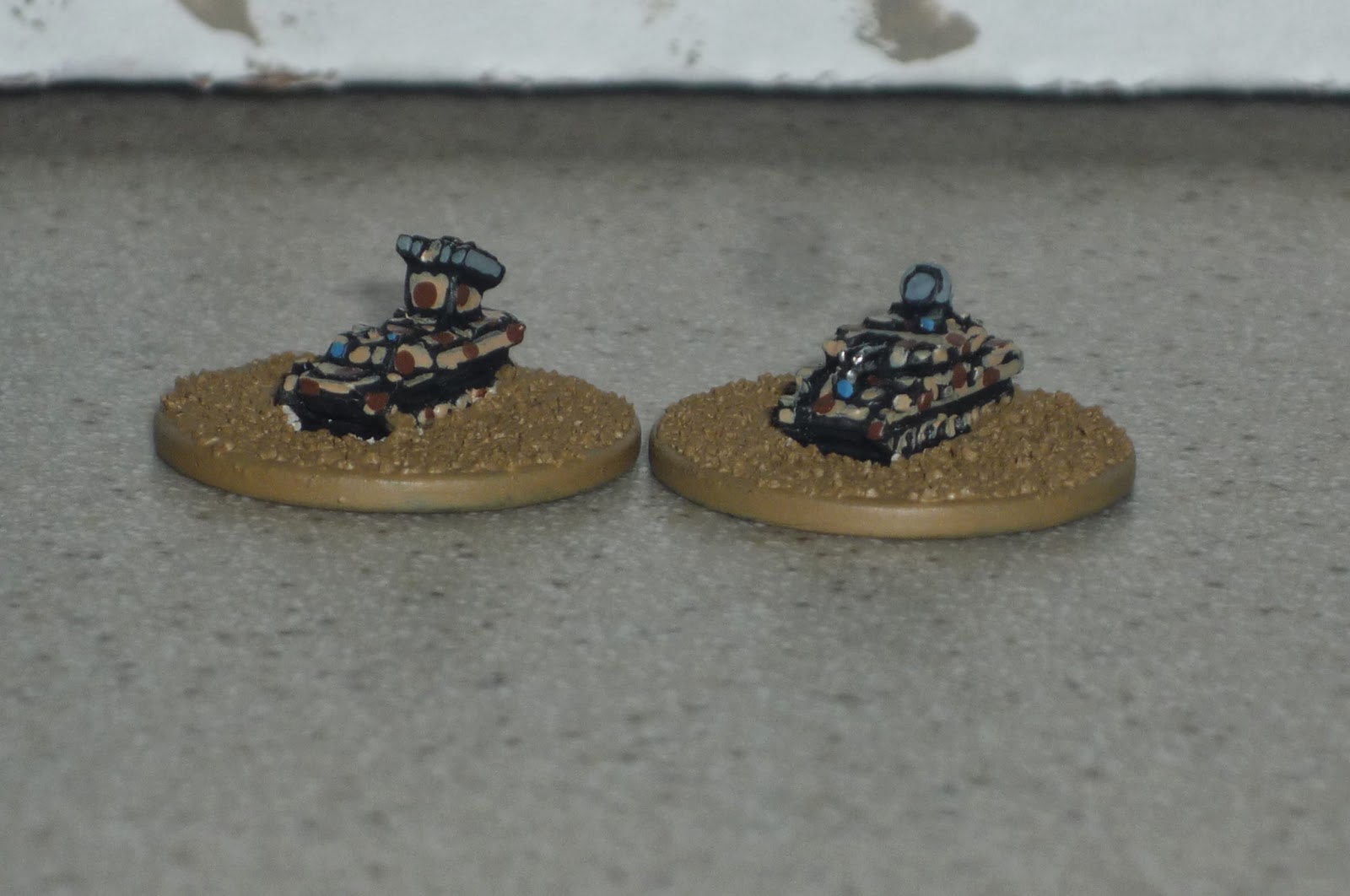 Another look.  I was trying to show off how good these sculpts are. 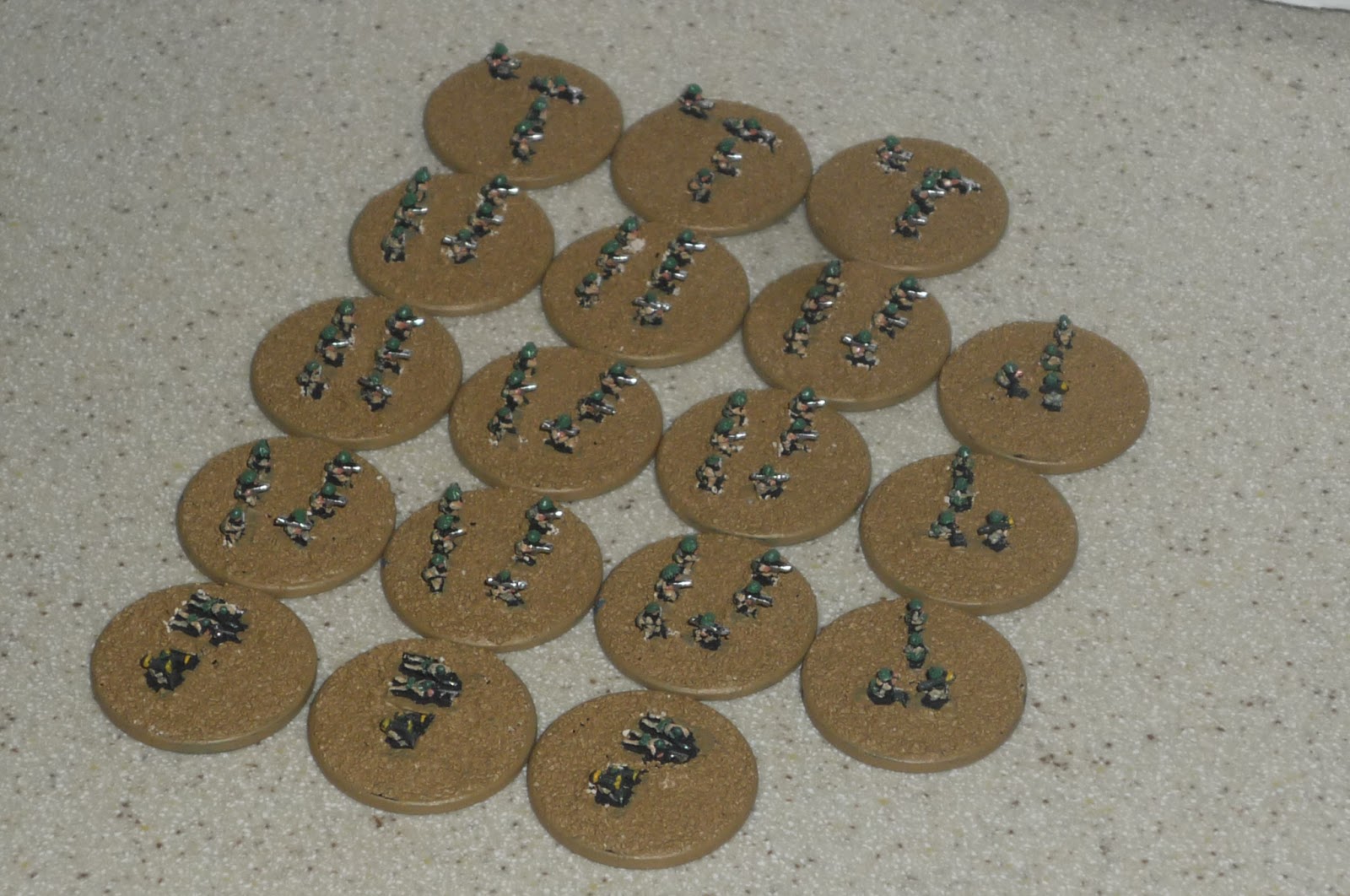 And this is where my camera is really not going to do the little guys justice; the bad guy infantry.  I used the new generic NATO infantry, and the sculpts are amazing.  Here there are 12 rifle stands, three ATGM stands (actually TOWs from the US Inf pack), and three SAM stands (will double as HQ stands for Cold War Commander games). There are actually two different types of rifle stands; here's the first one.  There are five guys with rifles walking with them at either port arms or at what we used to call 'the ready,' i.e., weapon in shoulder, looking over top the sights while advancing.  The 6th guy has an RPG.  If you look closely at some of these guys you can see skin. 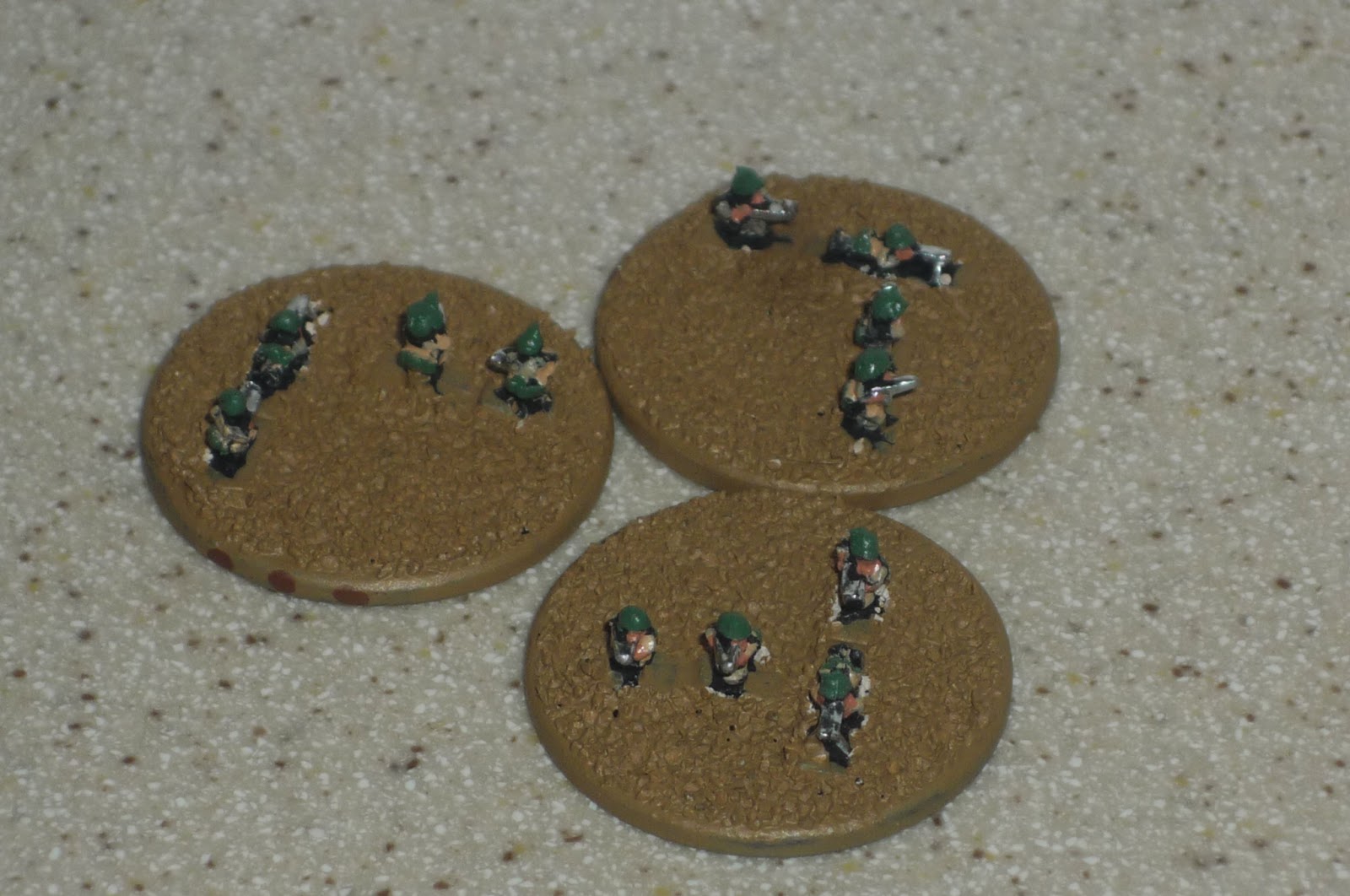 Here's the other type of rifle team.  A couple guys with rifles and a LMG in the prone. 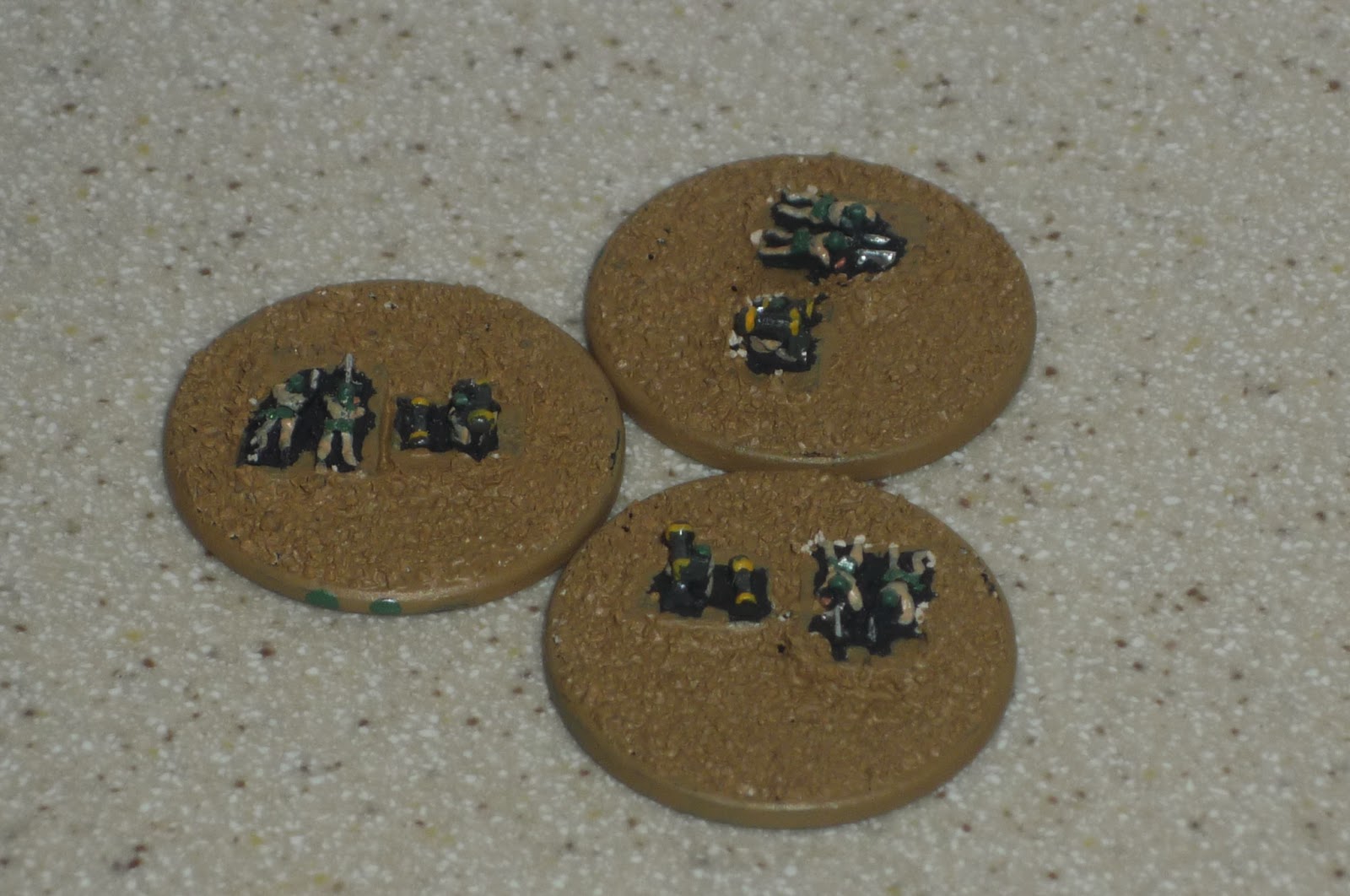 Closeups of the ATGMs.  Each stand has a prone, two-man LMG team, and one guy manning the ATGM, with a spare round lying next to him.  I painted the launcher/rounds a gray green then put a yellow band at each end of the round. 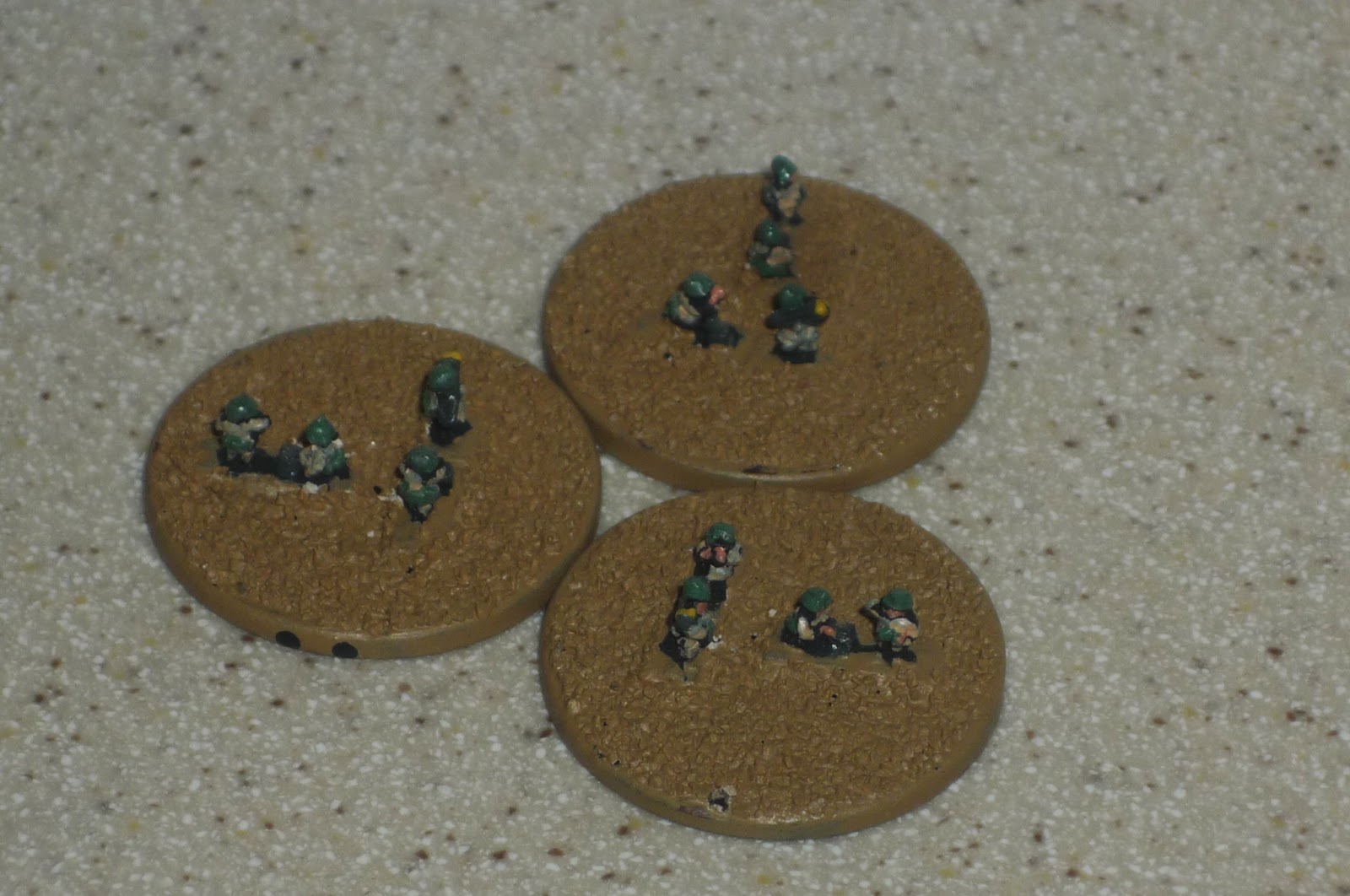 Closeup of the SAM stands.  Two sets of two guys on each stand; one set looks to be an officer talking on a handset and the other is his RTO.  The other pair is the SAM guy (looks like an SA-7, though that doesn't make sense for NATO infantry) and his number 2. I took another couple photos of an ATGM team, just trying to show how good the sculpts are, though I don't think my camera was good enough to make it work... 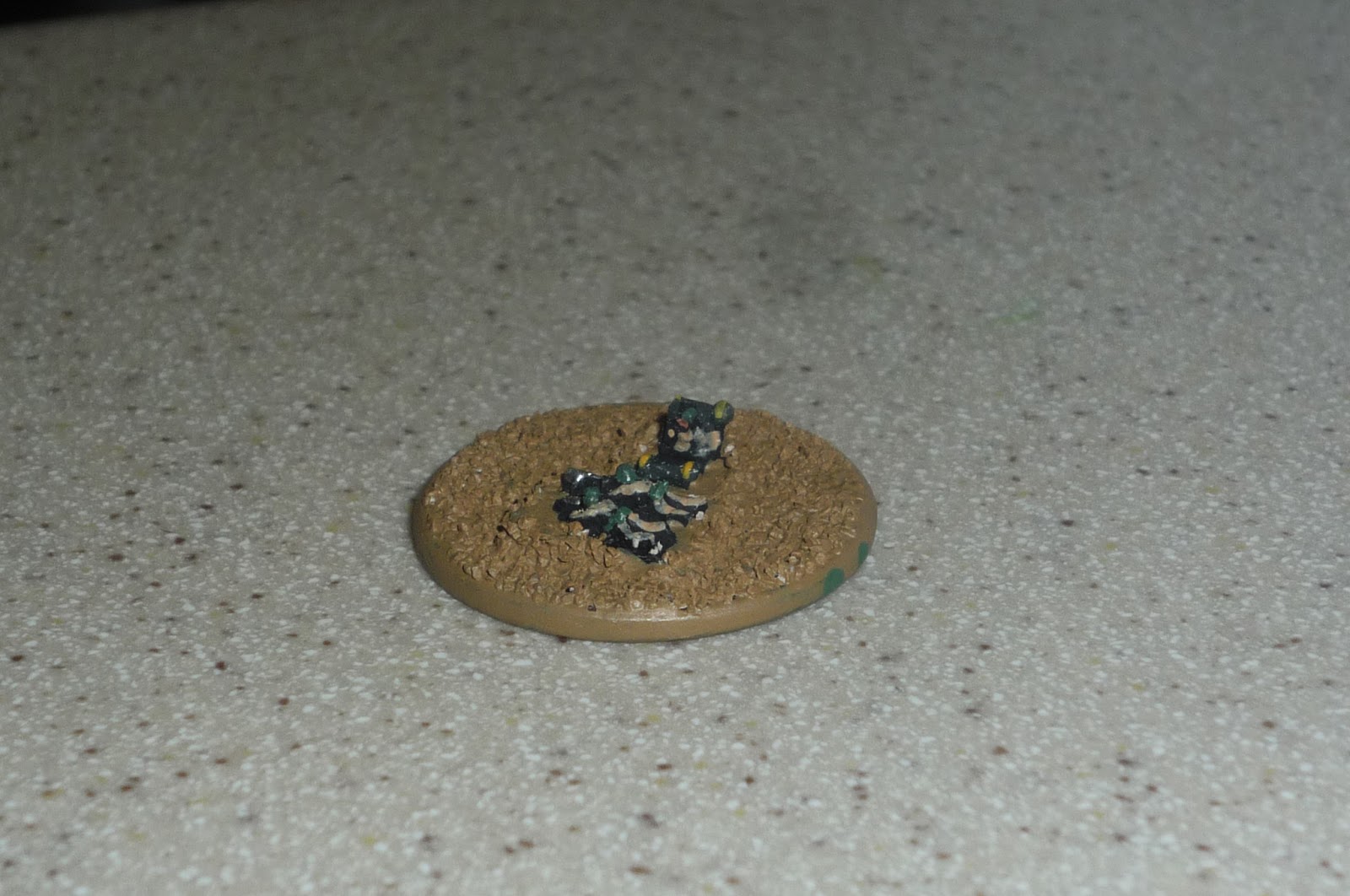 Well, no painting tomorrow!  I have resolved to play something, so stay tuned for a battle report in the near future.