The title of this post should be, "The Wife is Going to Kill Me, and It Probably Wasn't Even Worth It."  What I mean is, the wife's pregnant, meaning she's even needier than normal ;)  And I have been a total @#$% by spending more time than ever painting and otherwise ignoring her and the kids...  I've been working on figures for small scale, skirmishy battles, and today I resolved to not paint, but spend my time playing some of these new, small scale, skirmishy games.

Ultimately this means today was a day to playtest some skirmishy rules.  Spoiler Alert: I can't seem to find/create a set of rules, at 1:1 where individual men activate and operate, that 'does it' for me.  Today I went upstairs and grabbed all the skirmishy stuff I needed, then set it up downstairs in the dayroom (at least in the same area as the wife and kids).  I had previously done up some rules, largely based on "Flying Lead."  I sat down, set up, and started playing.  I got about an hour into it and realized I wasn't having a good time.  I removed the men back to their start positions, re-worked the rules, and went at it again.  About another hour in I realized, once again, I wasn't having a good time.  Back to the start positions, totally changed the rules, and went at it again.  The rules were much better this time, though I still didn't have a great time, for a few reasons:

1) I was worn out from the first two tries.
2) I was feeling bad for once again ignoring my family to play with toys.
3) As it was a playtest, my scenario was sorta just thrown together (more on that in a moment).
4) As the scenario was just thrown together, it lacked my normal campaign background, meaning I wasn't attached to the troops, i.e., the units and men weren't 'personalized.'  My games (and battle reports, I believe) are at their best when I'm following the exploits of Sgt Snuffy, who we know to be a solid guy despite the fact he cowered like a girl in the last fight, and then it's awesome when he personally leads a counterattack that saves the day.  Stuff like that is really great to me, but this game didn't have it because I was playtesting...

So, I apologize in advance as this is not my best work...

You're probably asking yourself, why is the post titled "Grenada???"?  It's because when I grabbed forces I was looking for individually based troops, and I grabbed some Vietnam-era US troops and some Falklands-era Argentinians I intend on using as Cubans.  As I had also grabbed coconut trees, I figured the only thing that made sense was Grenada.  So, the set-up is that a squad of 82nd Airborne doggies is on patrol to secure a crossing over the Huevos River.  Defending is a squad of Cuban regulars, with their primary defensive position being a sandbagged emplacement holding a light machine gun, overlooking the bridge. 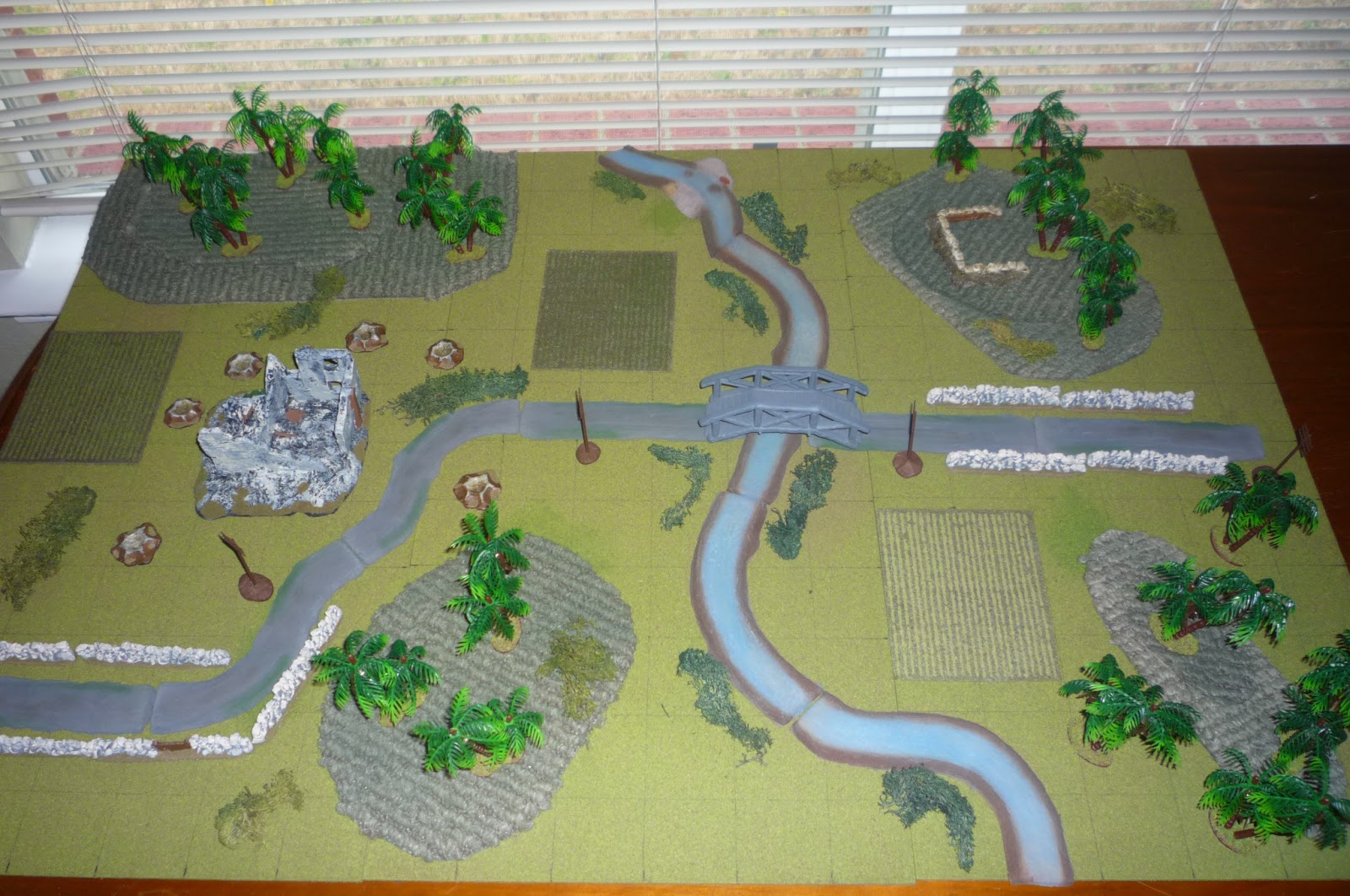 The battlefield, with top being north.  The US forces are entering at the bottom left on the road, trying to capture the bridge (center) over the Huevos.  You can see the Cuban MG emplacement at top right, while there is an abandoned, bombed out stone house at center left. 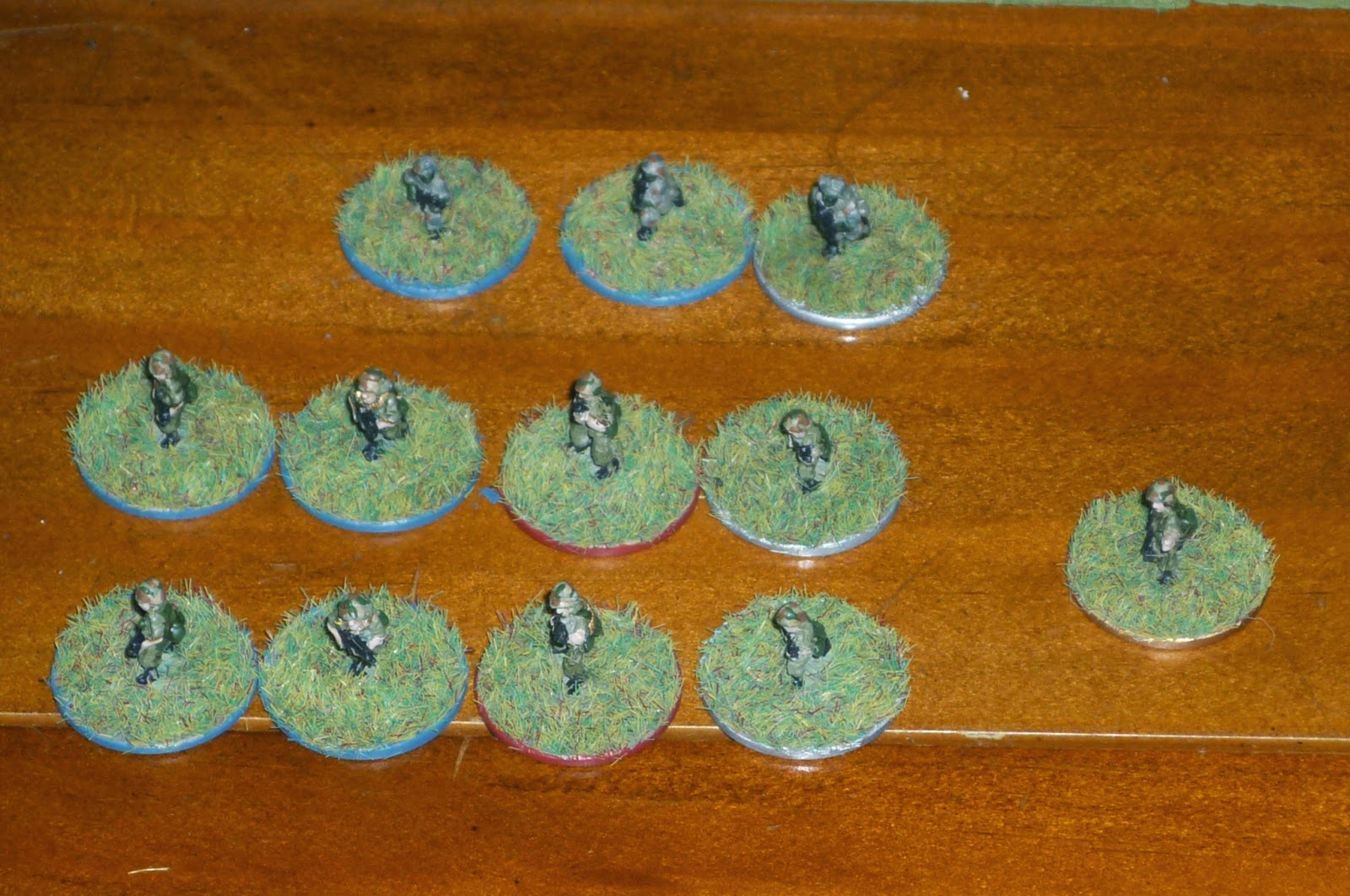 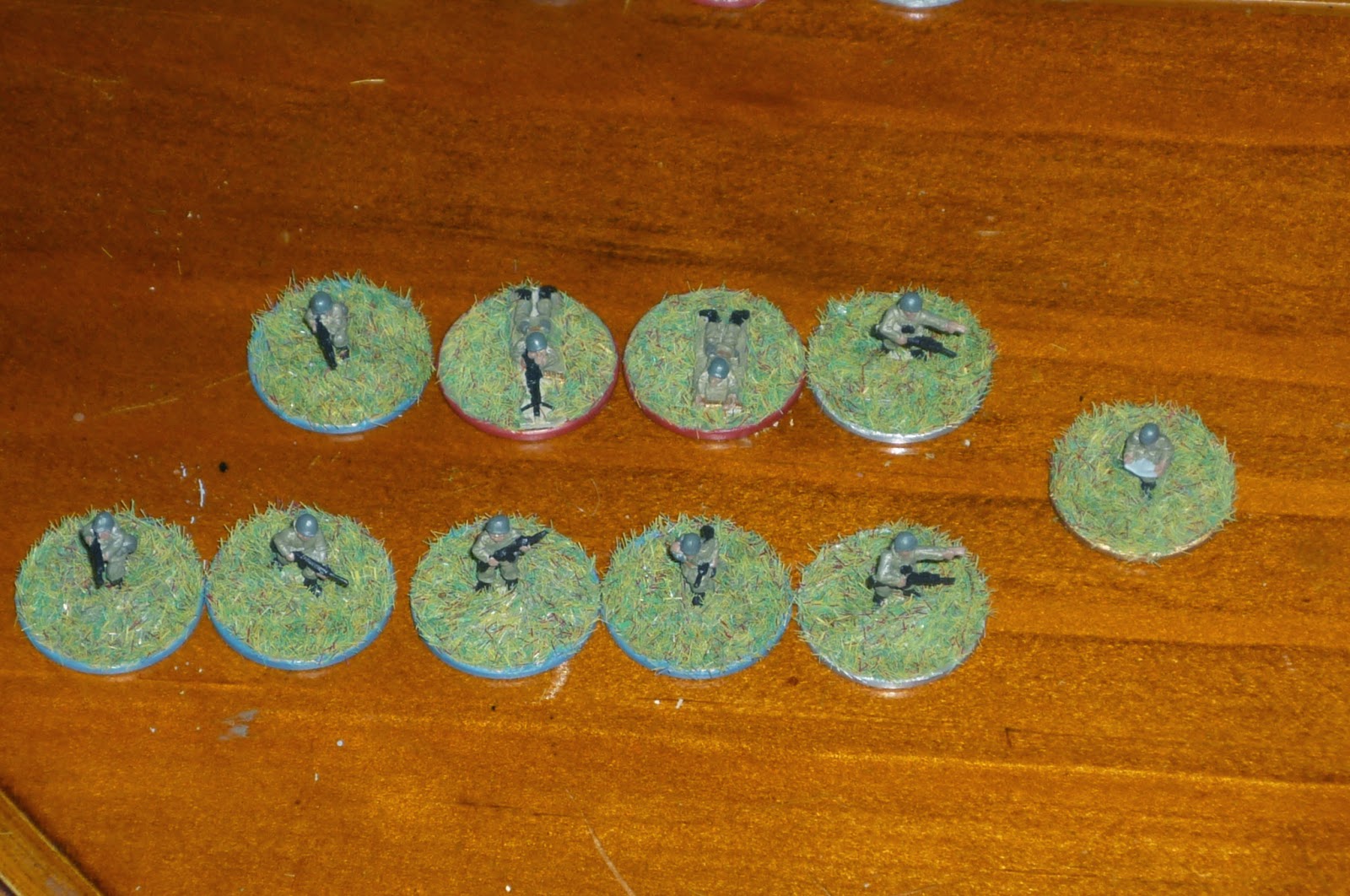 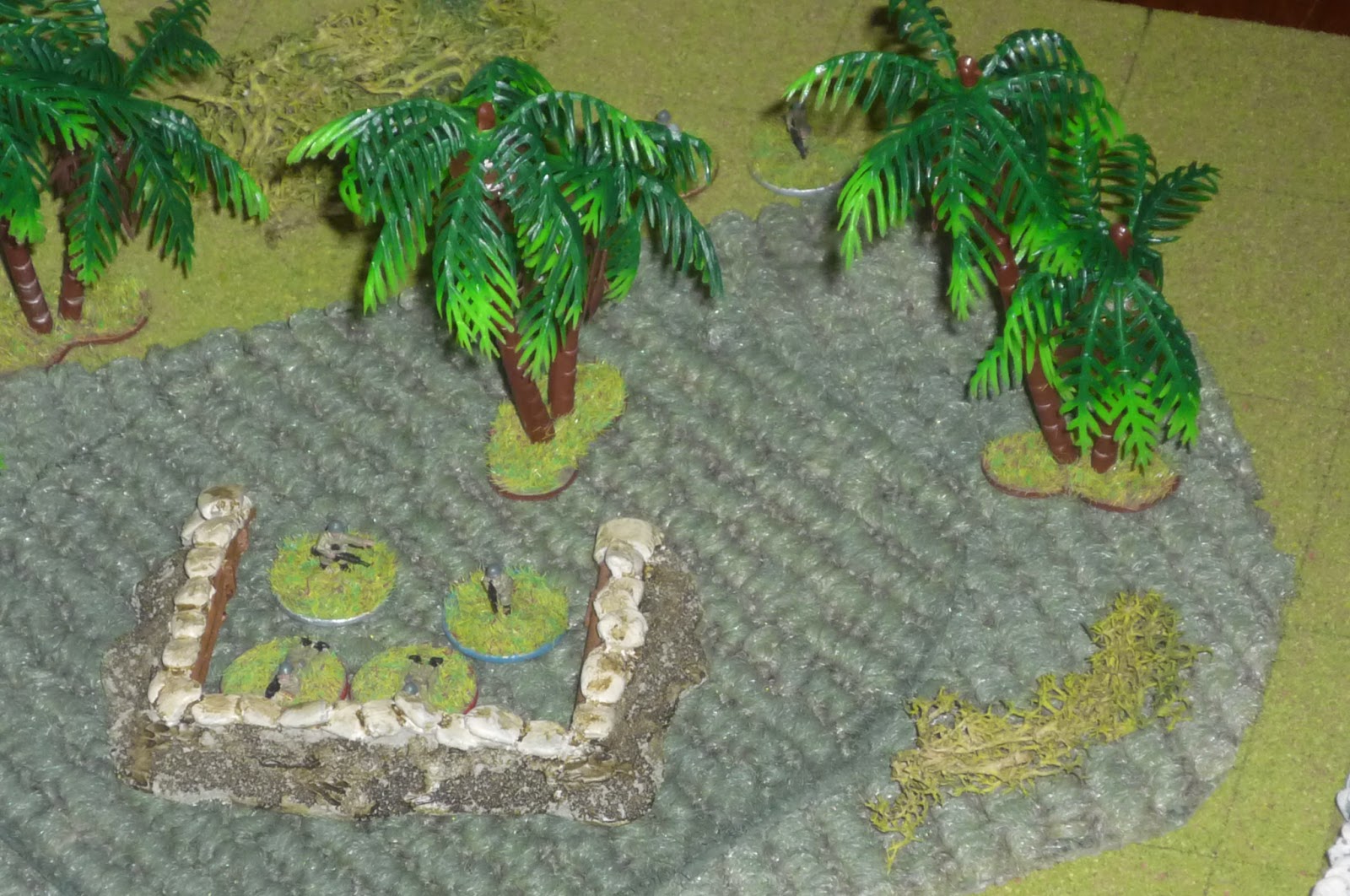 The Cuban MG position, with Cpl Tostitos and his men on high alert.  Through the trees at top you can just make out Sgt Zorro conferencing with Cpl Doritos. 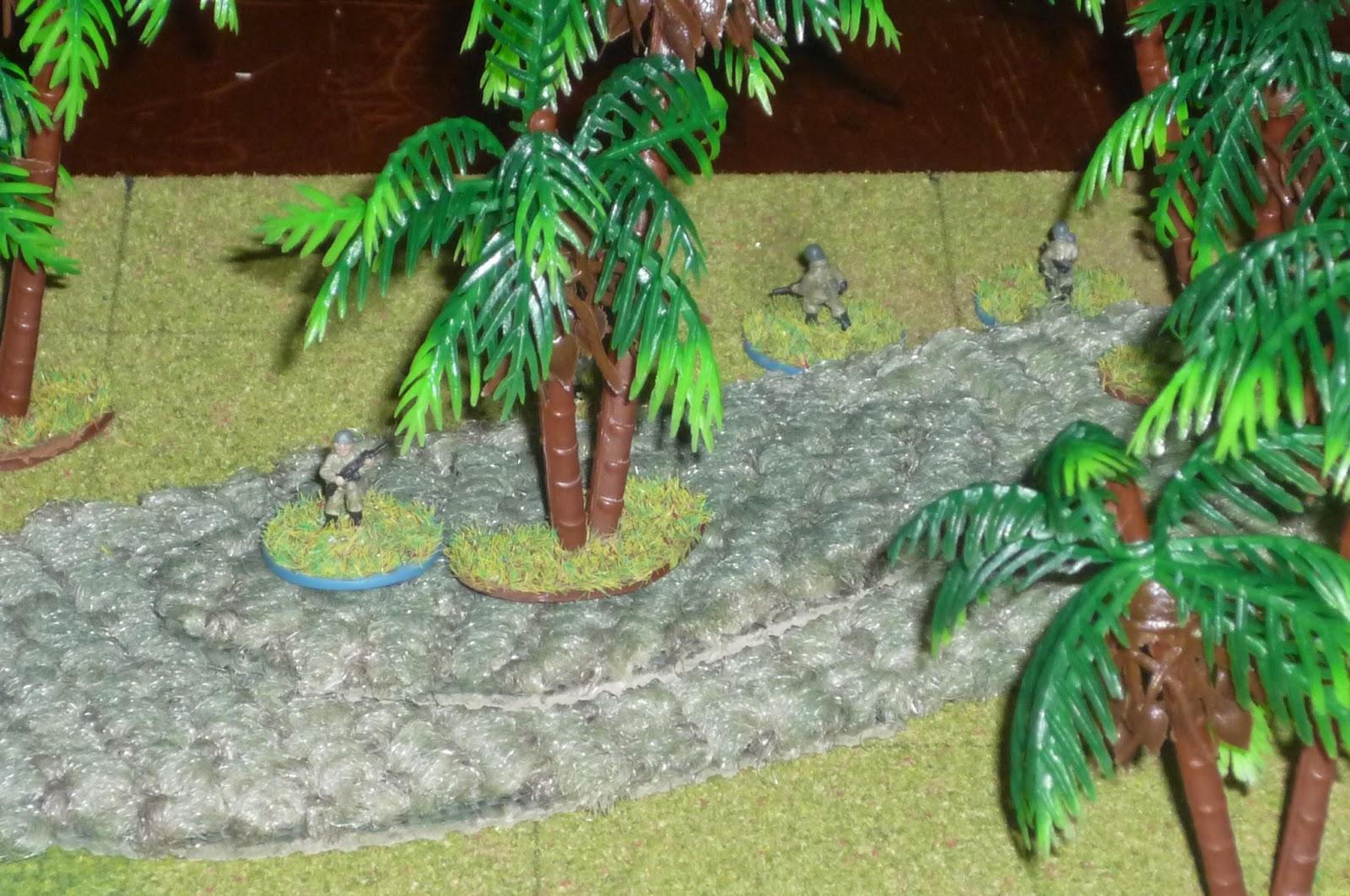 On the south side of the road, Cpl Doritos' team is at 25%, with one man on watch while the other three rest. 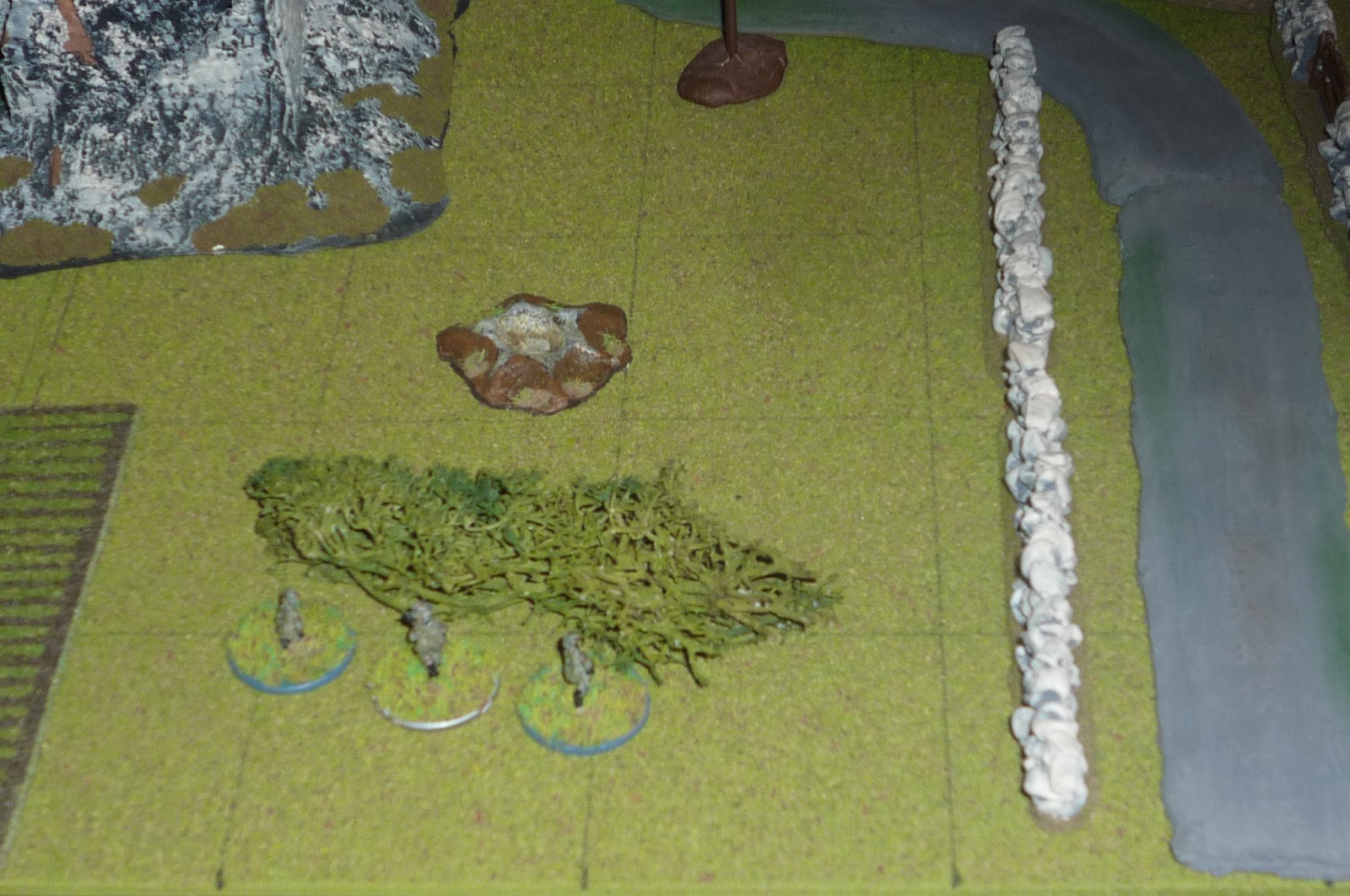 On the US side, only Cpl Klinger's scout team starts on the board.  This is from the US baseline looking east towards the Cubans.  Road at right is the US start position (where the rest of the squad will come on). 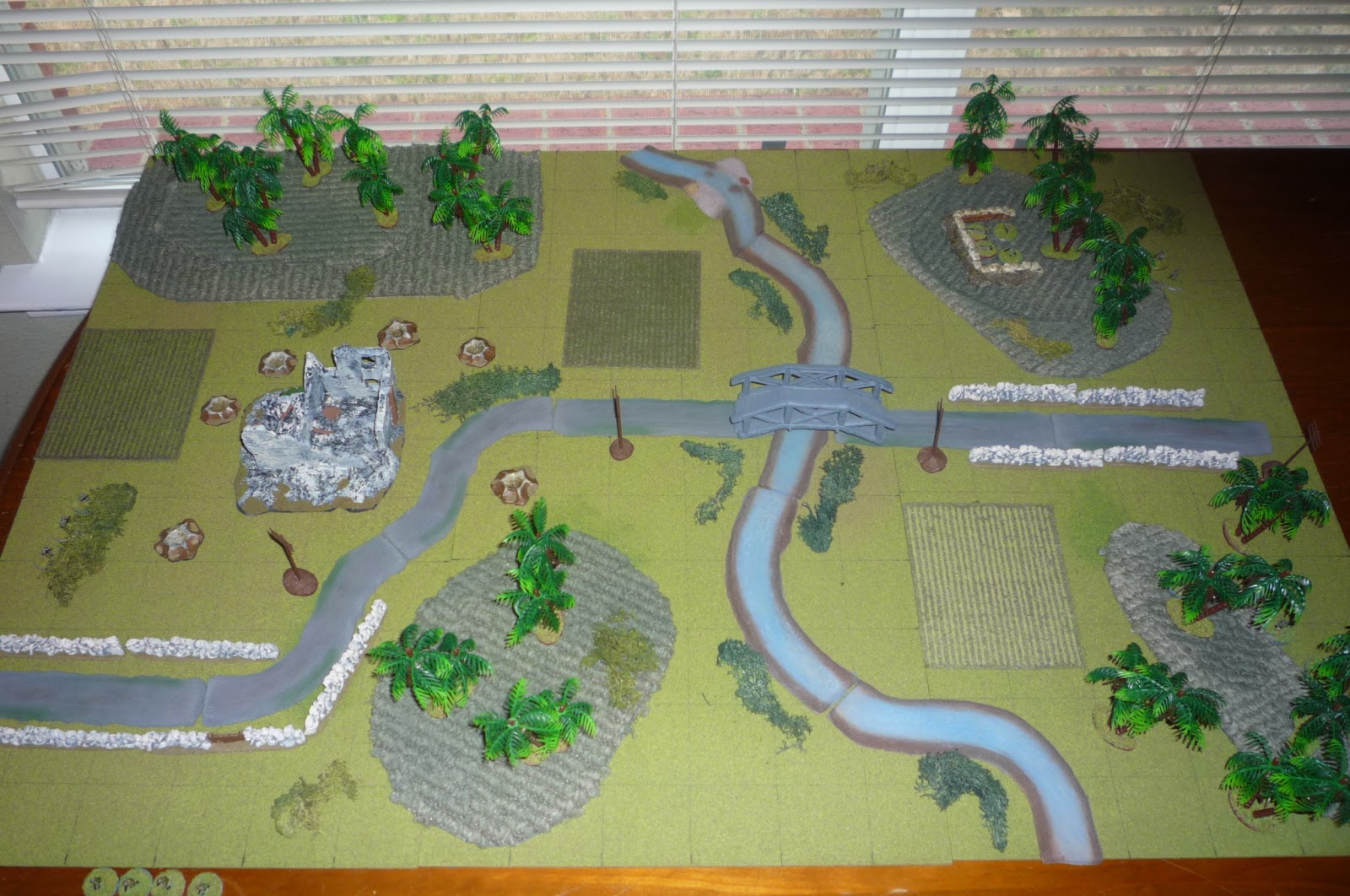 Let's get started, shall we? 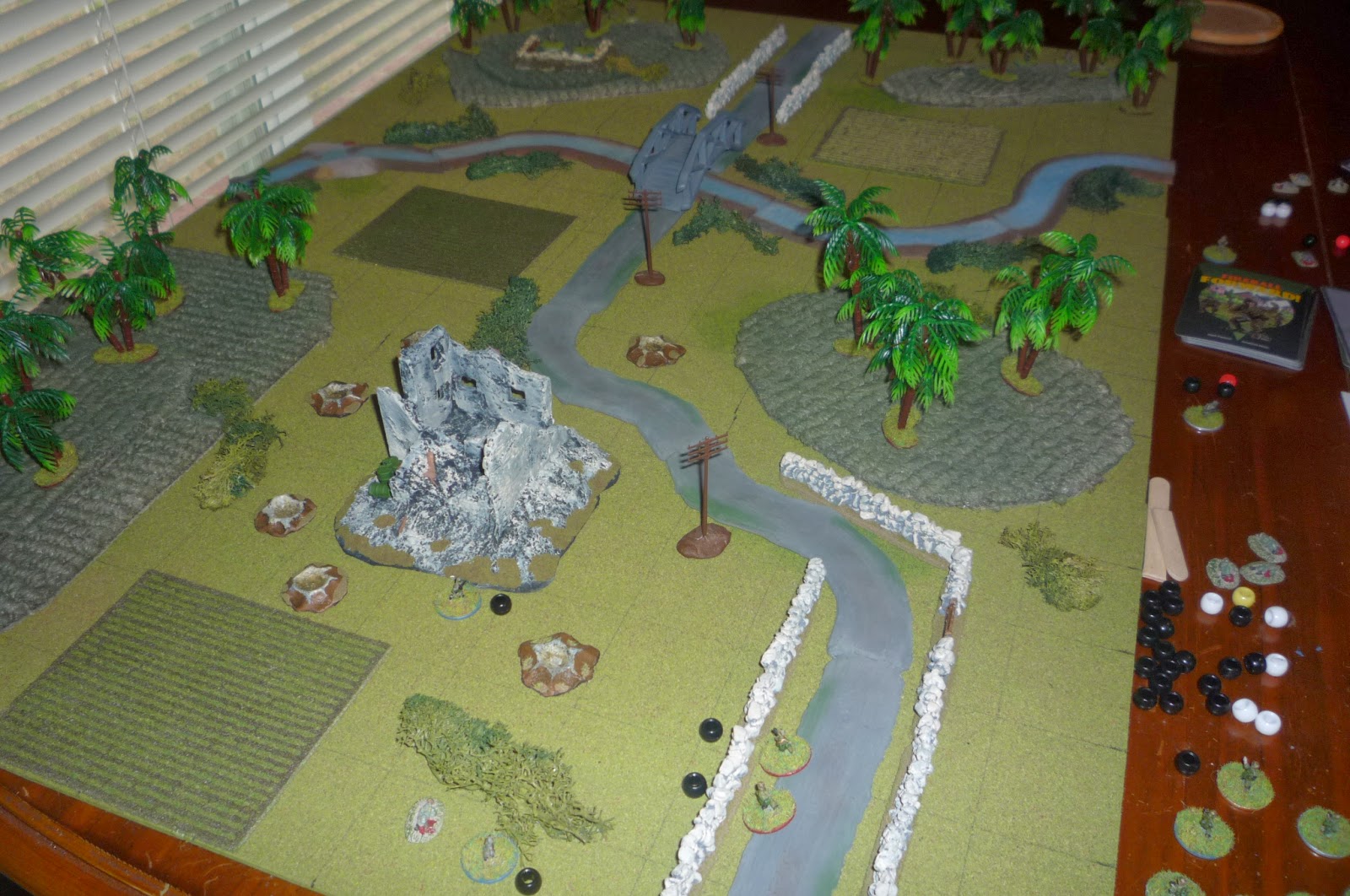 First thing at the gate, the 'lone sentry' on the hill, from Cpl Doritos team, opens up and puts Cpl Klinger out of action (bottom center).  One of the remaining scouts moves into the house and returns fire, while the other stands his ground (besides Klinger) and returns fire, putting down the lone sentry.  The M-79 grenadier and M-60 gunner both come on (on the road) and fire at the Cuban MG position, while the Cuban MG returns fire.  No one hits anything... 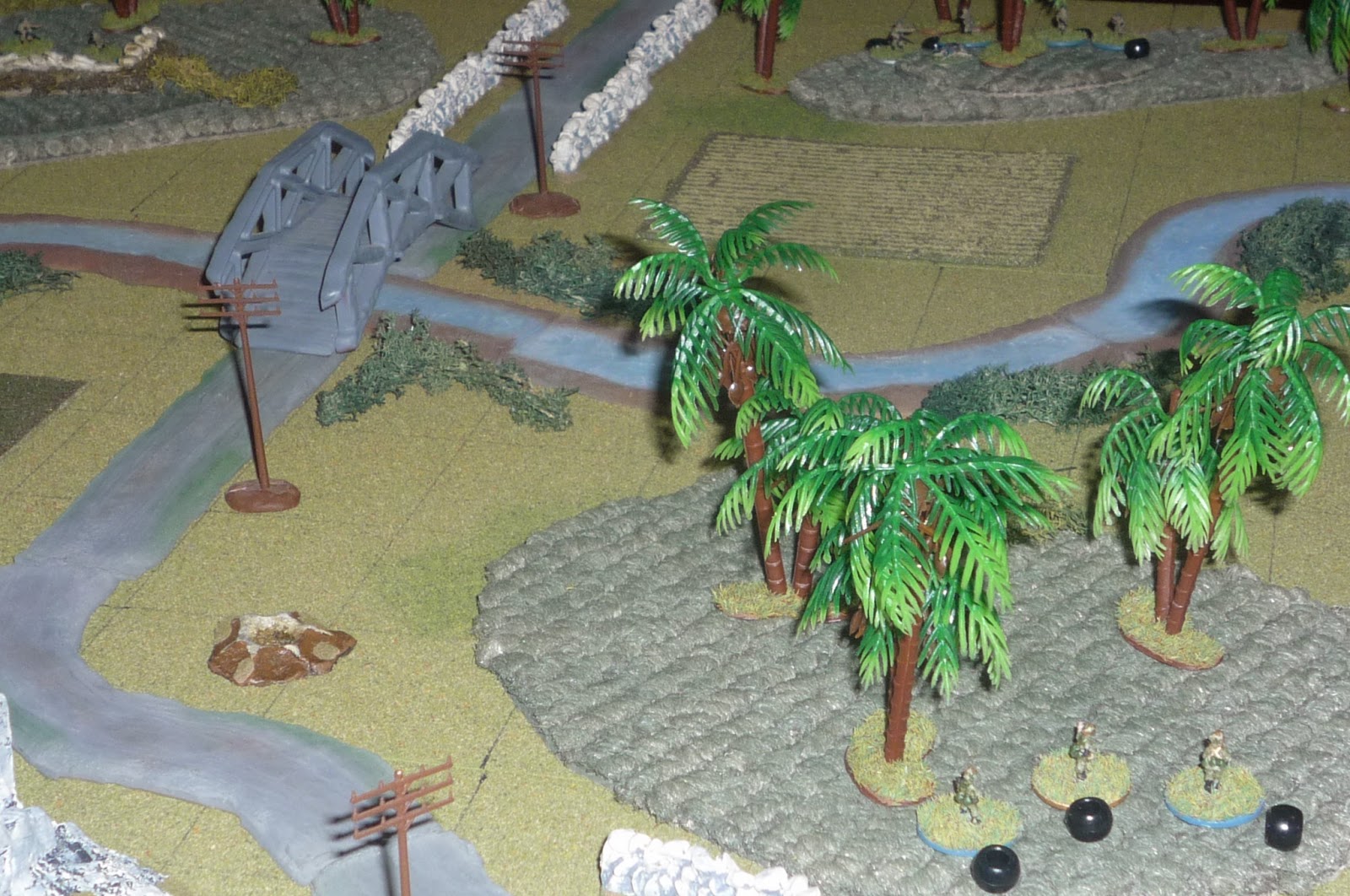 Sgt Bilko sprints up the right side, mounting the coconut tree-filled knoll.  One of Cpl Doritos' riflemen mounts his hill and fires at Bilko, but misses.  Bilko is soon joined by two riflemen, while another of Doritos' men pops up and fires at them, hitting nothing.  Cpl Doritos takes his leave of Sgt Zorro and sprints across the road to join his men. 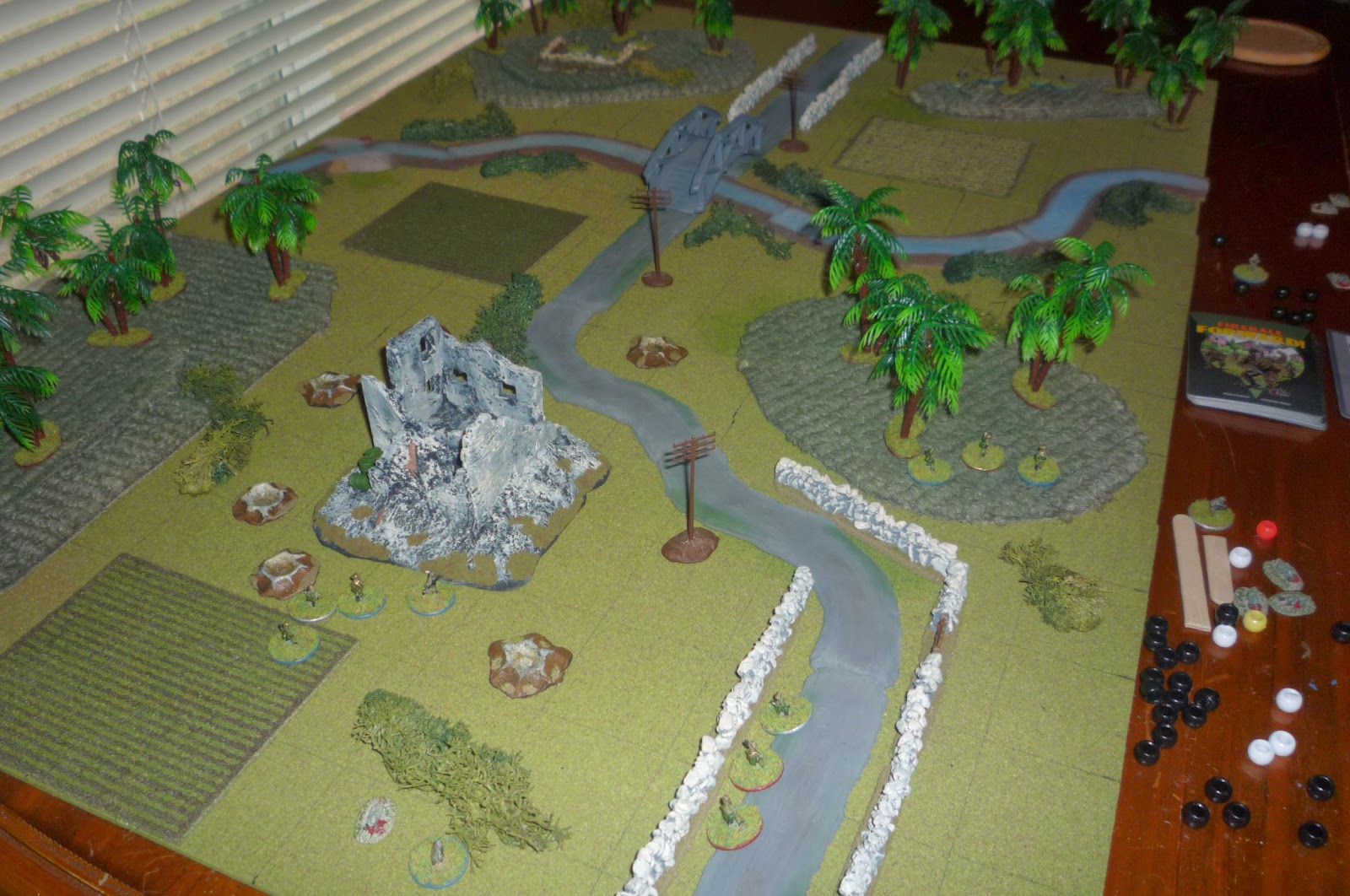 Cpl Bailey comes on, joining the M-60 and M-79 on the road.  Meanwhile, Cpl Snuffy darts left behind the house, and is joined by two riflemen (I didn't make the teams stay together as they should have).  The Cuban MG opened up on Snuffy's team on the road, but didn't hit anything.  Sgt Zorro climbed the hill to join Cpl Tostitos' men at the MG position. 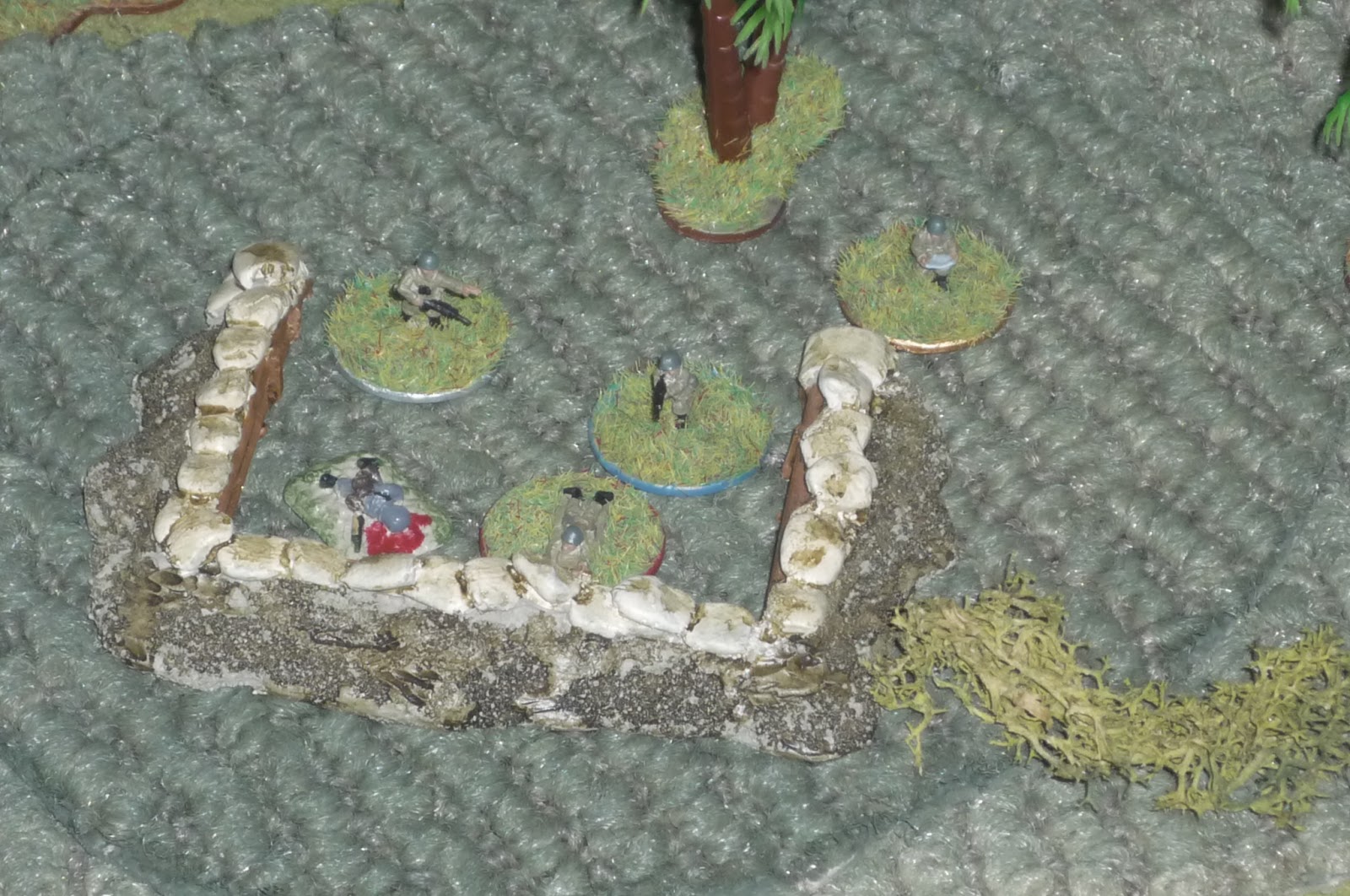 The Cuban MG again fired at the US M-60, and again missed, but the Pig returned fire and put the Cuban MG out of the fight. 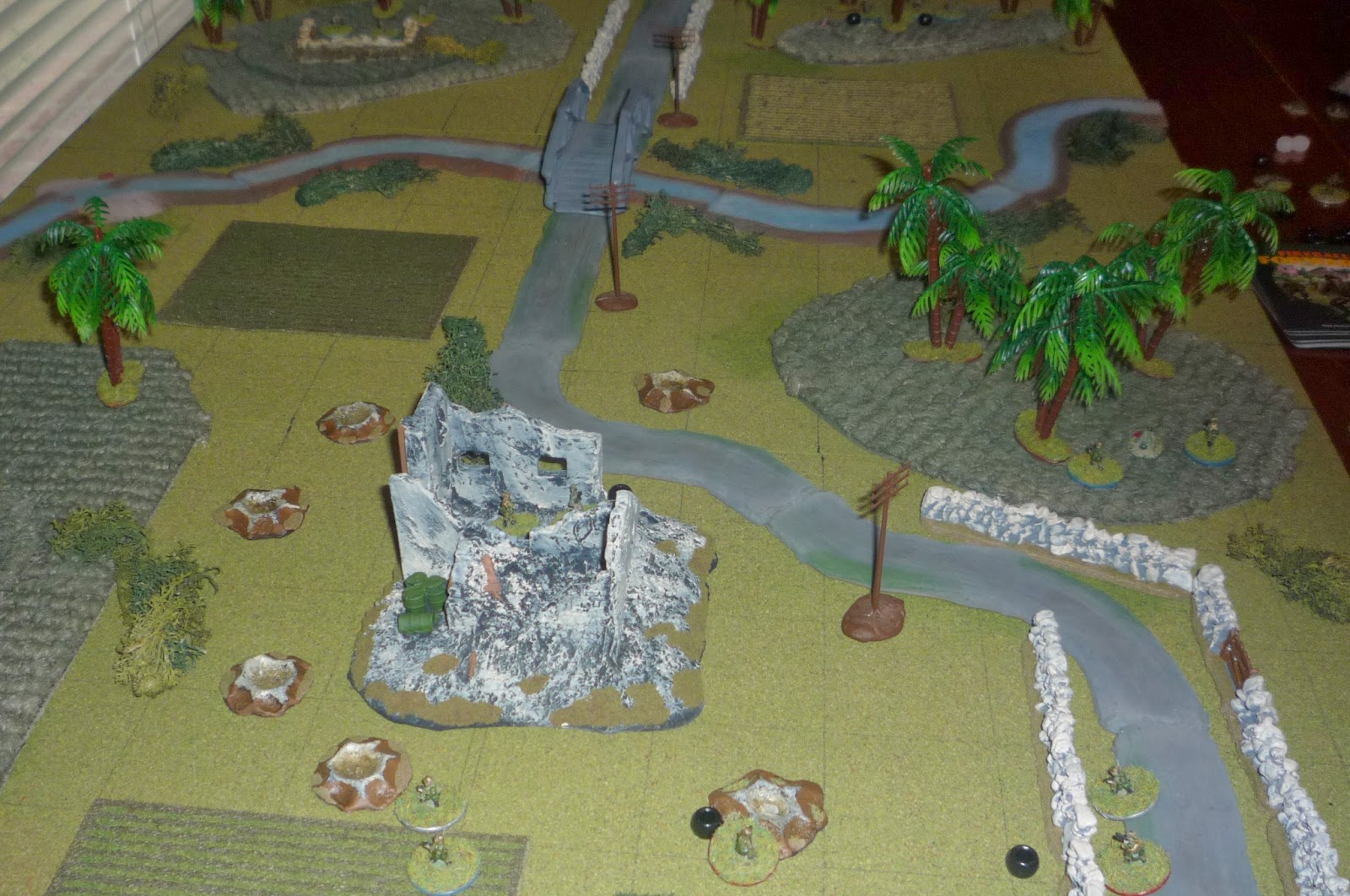 This was offset when the Cubans on the southeastern hill fired at the Americans on the southwestern hill, putting Sgt Bilko down.  The Grenadier hopped the wall, climbed into the ruined house, and popped a 40mm grenade onto the SE hill, putting a Cuban soldier down.  One of the downed Cuban's compatriots fired at the US troops on the SW hill, missing, whilst one of the US scouts moved into the house and returned fire, also missing.  One of the US riflemen joins the scout in the house, firing at the SE hill and missing. 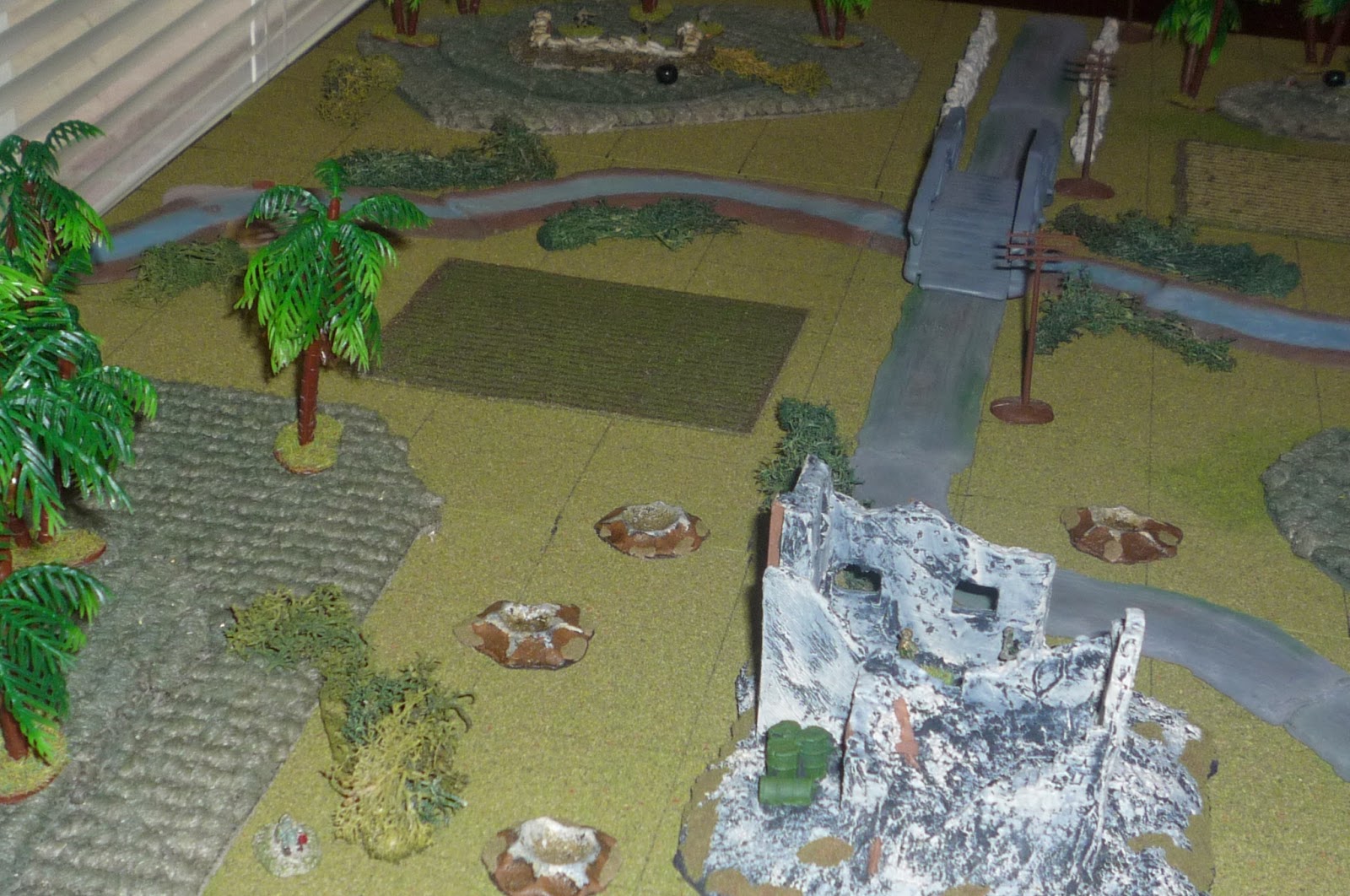 On the left, Cpl Snuffy moves past the house towards the NW hill, firing at the Cuban MG position, not hitting anything.  However, two of the remaining Cuban riflemen fired and put a big hole in Snuffy (bottom left). 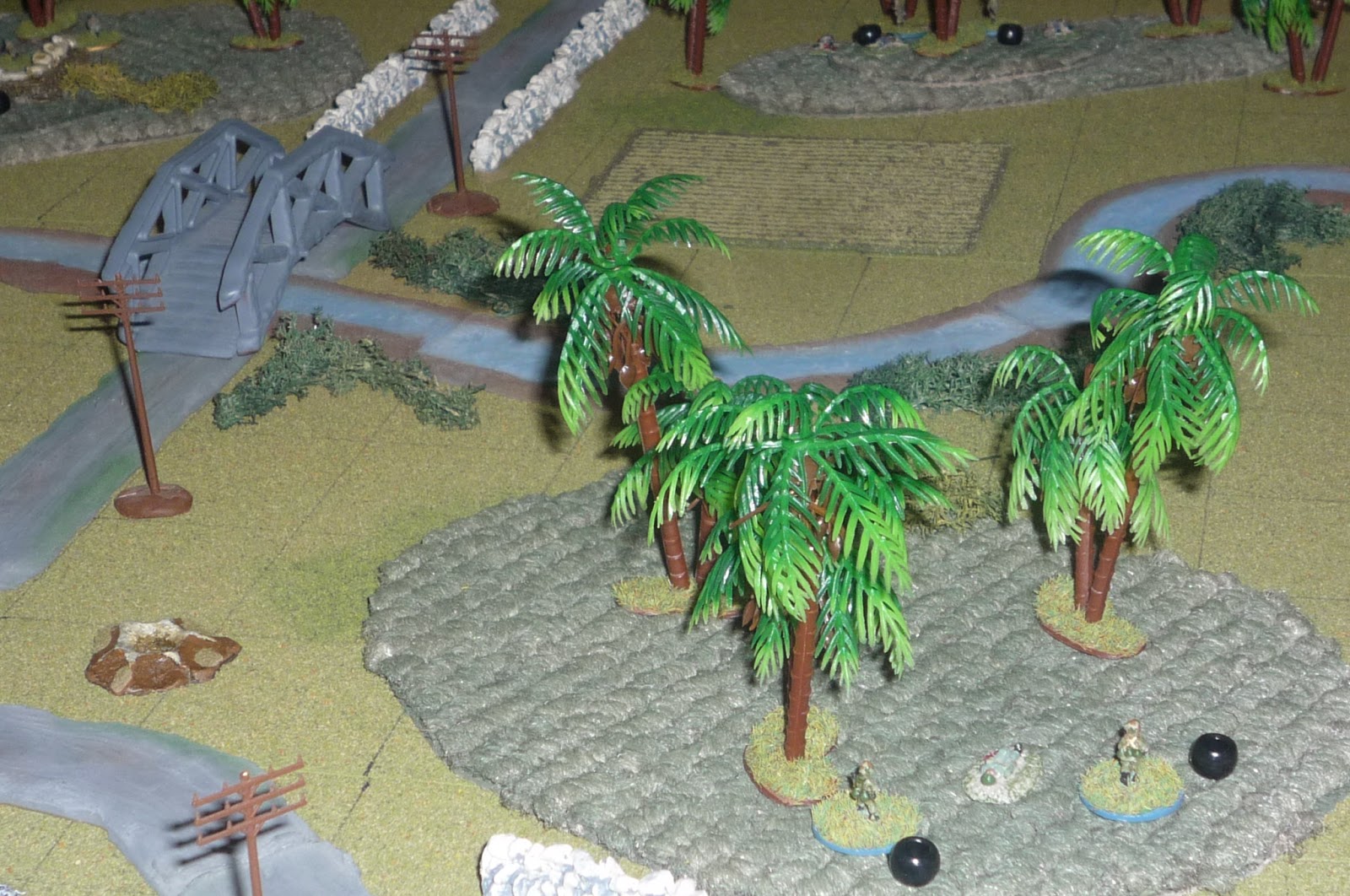 On the right, Cubans on SE hill kept up a steady stream of fire on the US troops on SW hill, hitting nothing, whilst the Americans kept up a hot fire themselves, putting Cpl Doritos out of the fight. 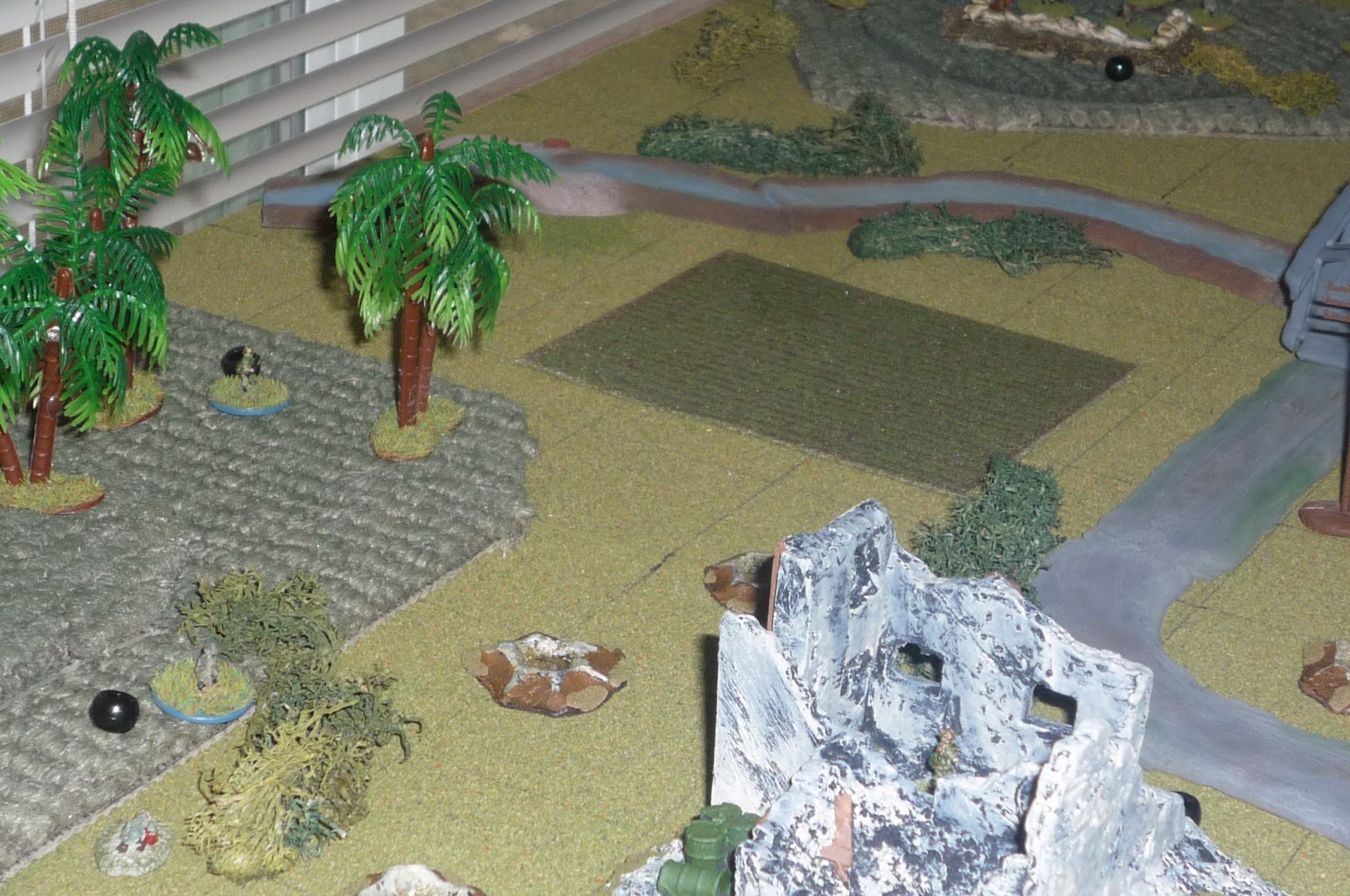 Back on the left, one of the riflemen rushes past Cpl Snuffy and climbs the NW hill, opposite the Cuban MG position.  The last scout follows (both are on the hill at left). 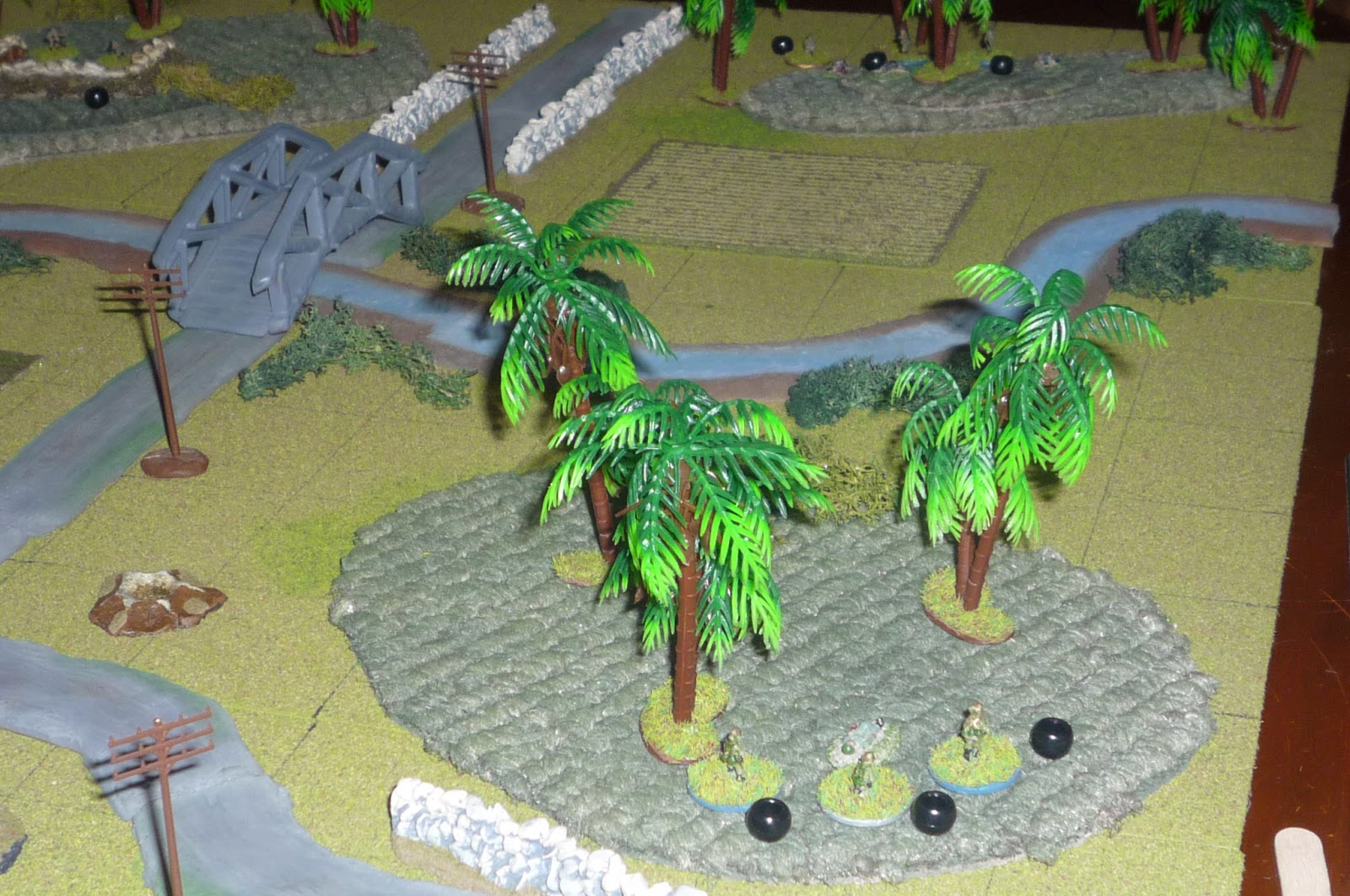 Corporal Bailey, having seen Sgt Bilko go down on the SW hill, moves up, hops the stone wall, and climbs atop the hill.  Similarly, Sgt Zorro saw Cpl Doritos get gunned down and moved from the NE hill to the SE hill. 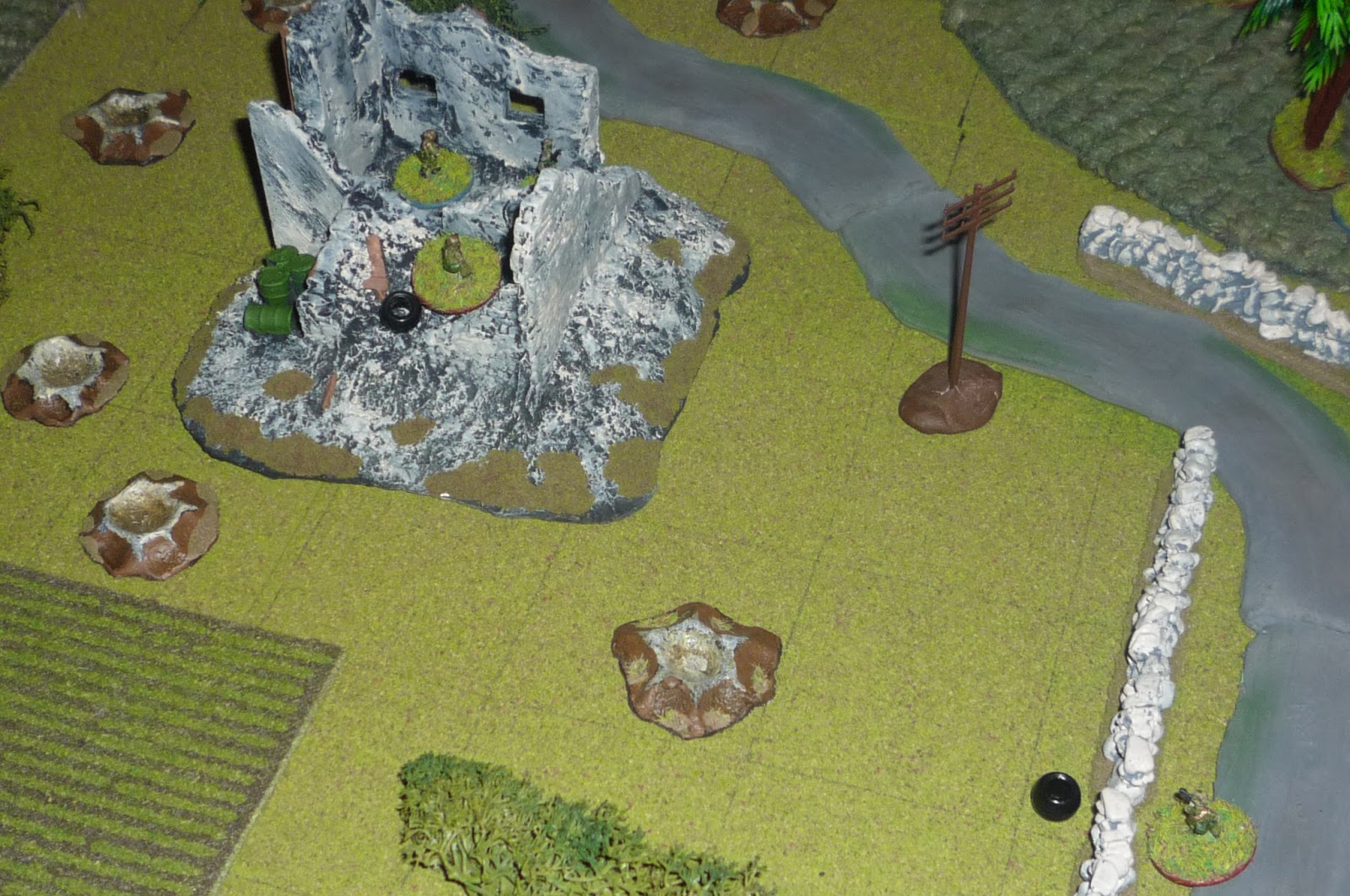 Cpl Tostitos, in the Cuban MG position, as well as one of his riflemen, fired at the US grunt in the trees opposite him, but both missed (not pictured).  The US M-60 (bottom right) and grenadier (in house) both fire at the MG position, but miss... 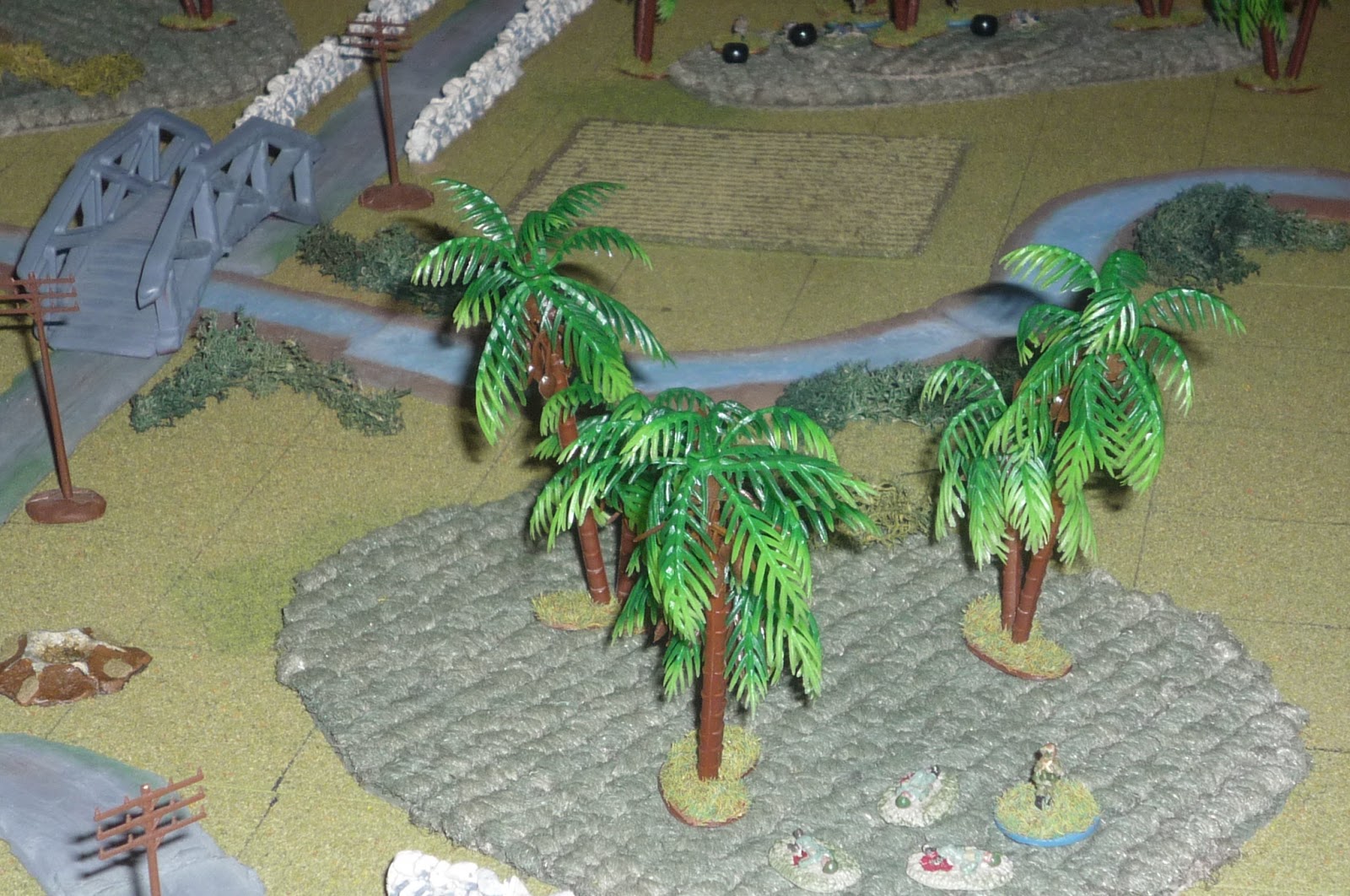 But their blood is up for the Cubans on the SE hill (top center), and they send out a wall of lead that puts Cpl Bailey and one of the riflemen down, leaving a sole US rifleman atop the SW hill (bottom right).  The remaining US rifleman calmly sights in on Sgt Zorro and puts him out of the fight. 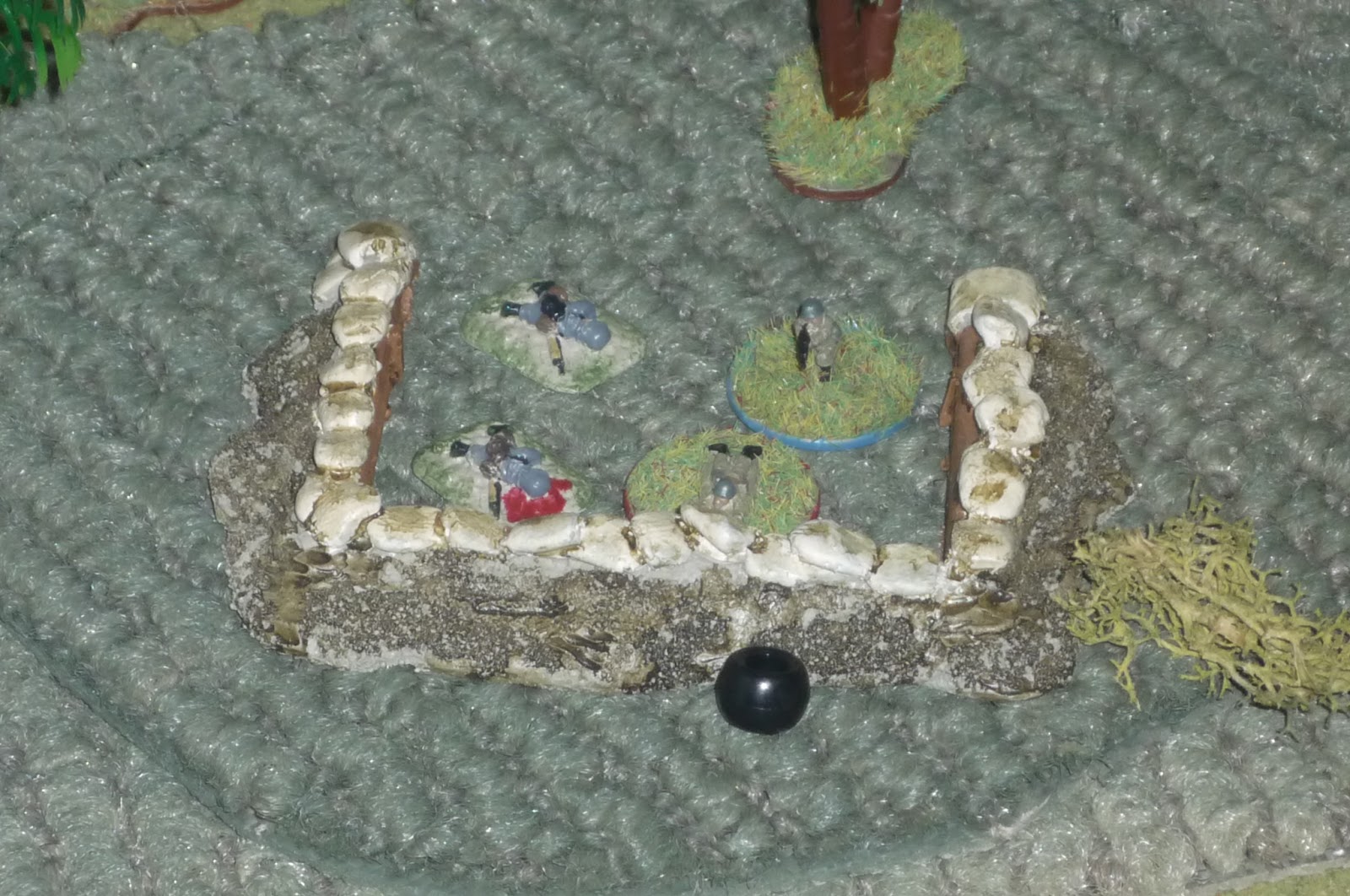 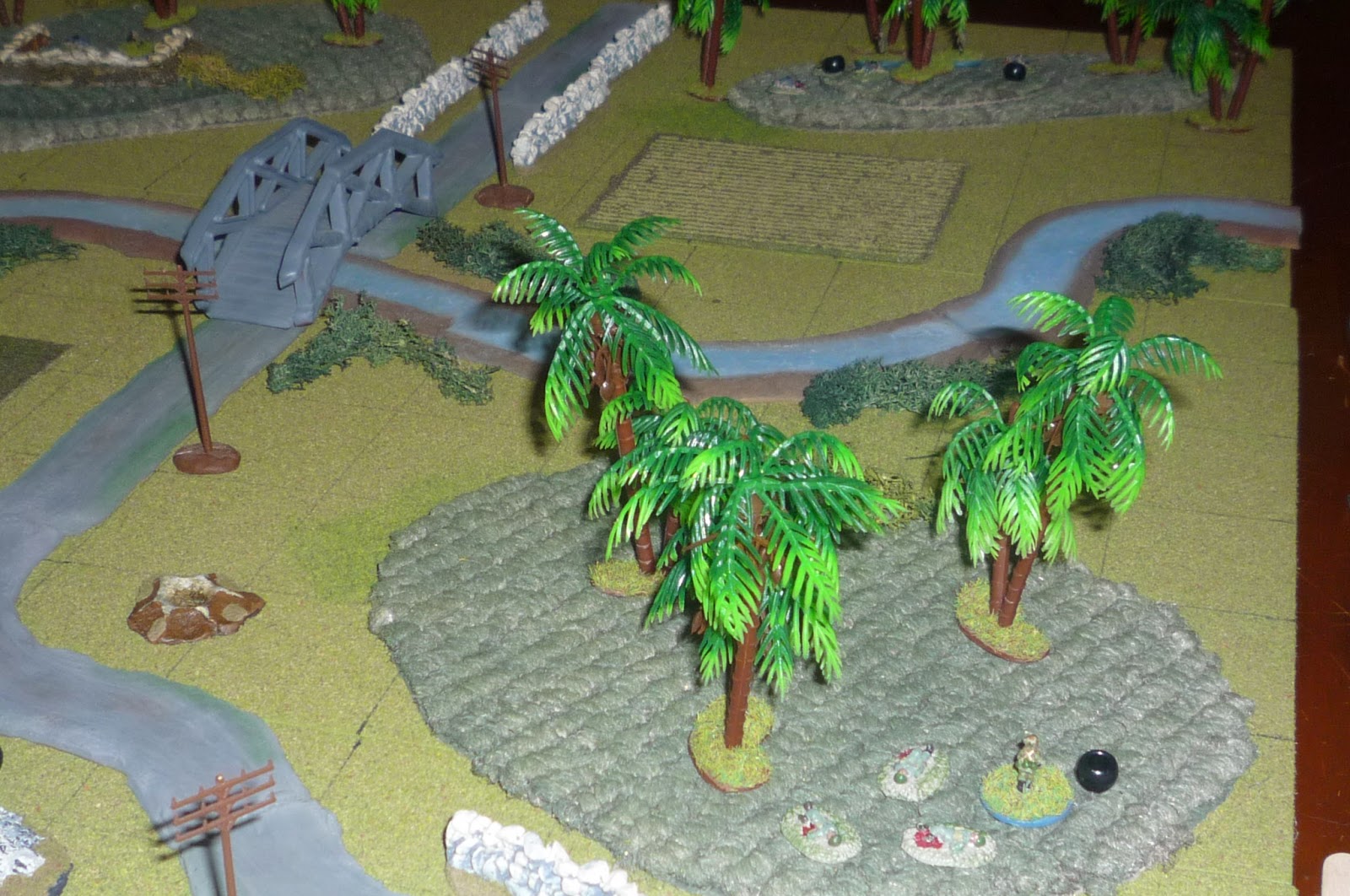 The firefight between the two southern hills is joined by the two US riflemen in the building.  Both Cubans and all three Americans fire (one on the SW hill, two in the house), but no one is hit. 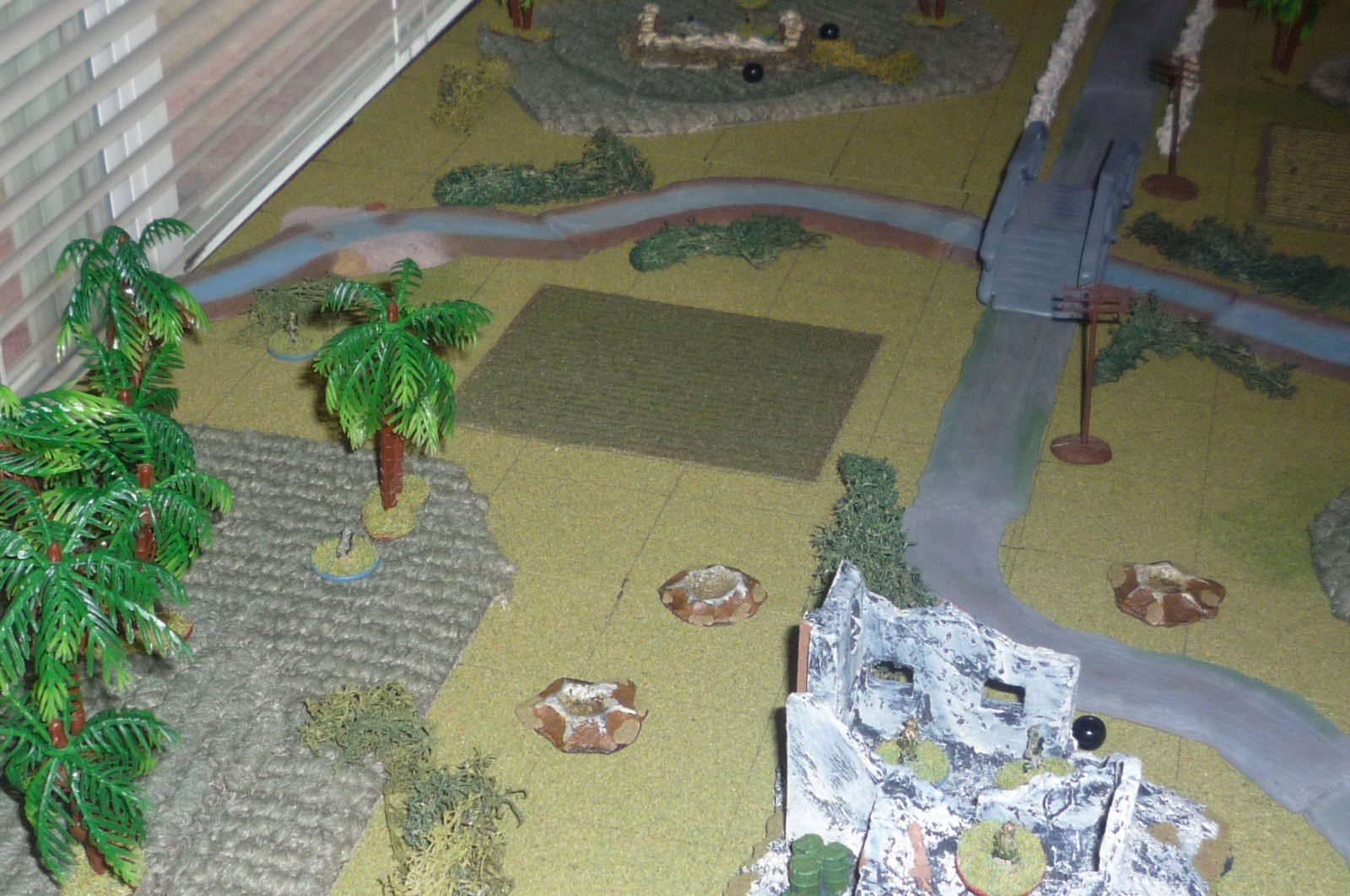 The US M-60 opens up on the two remaining Cubans in the MG position, to no effect, but their return fire is withering and pins the M-60 gunner (off camera to right).  The rifleman (just seen between the two trees on the left hill) and scout (base of tree on left) on left move up and fire, to no effect. 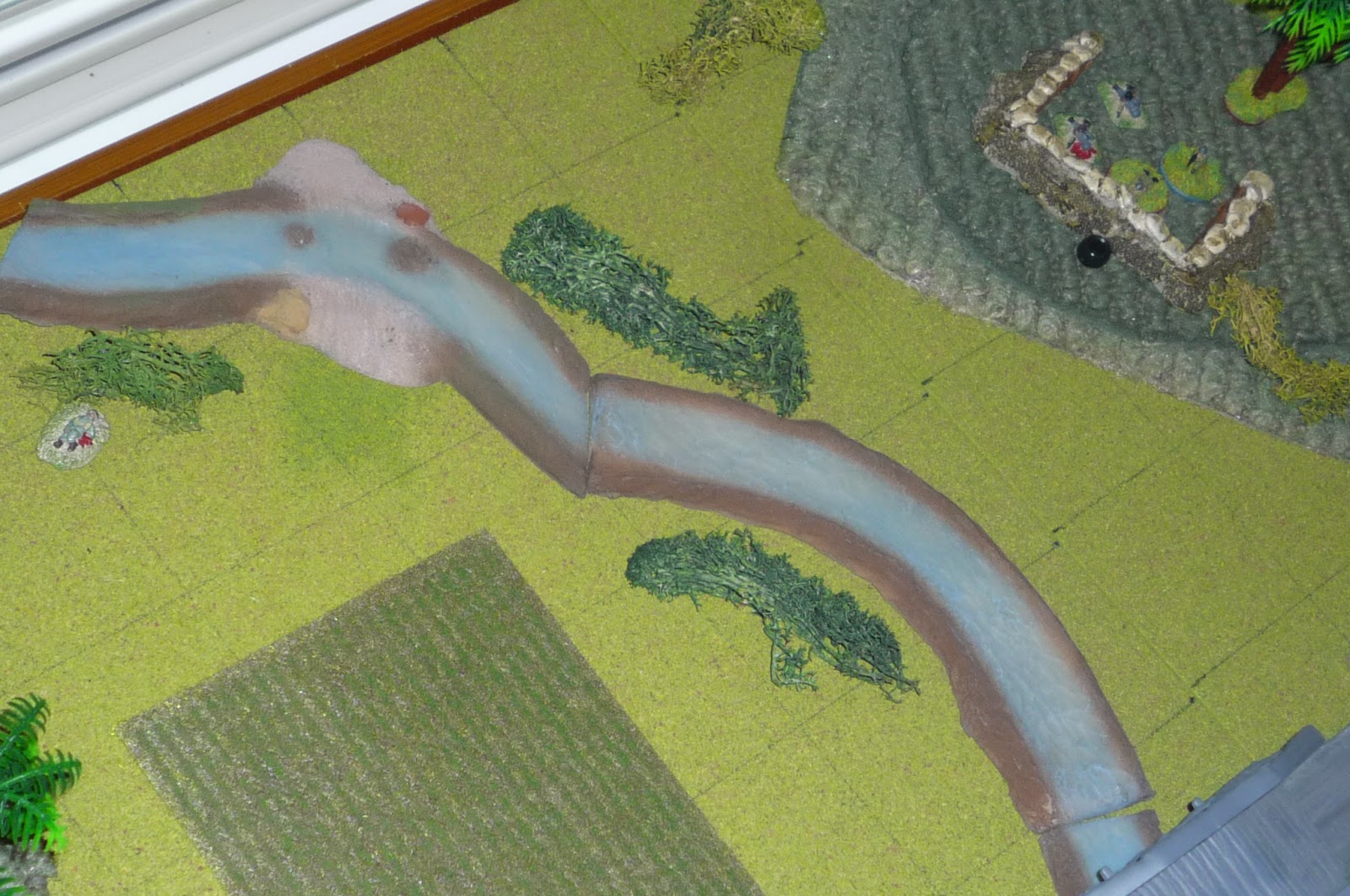 The Cubans in the MG position open up on the lead US rifleman, gunning him down. 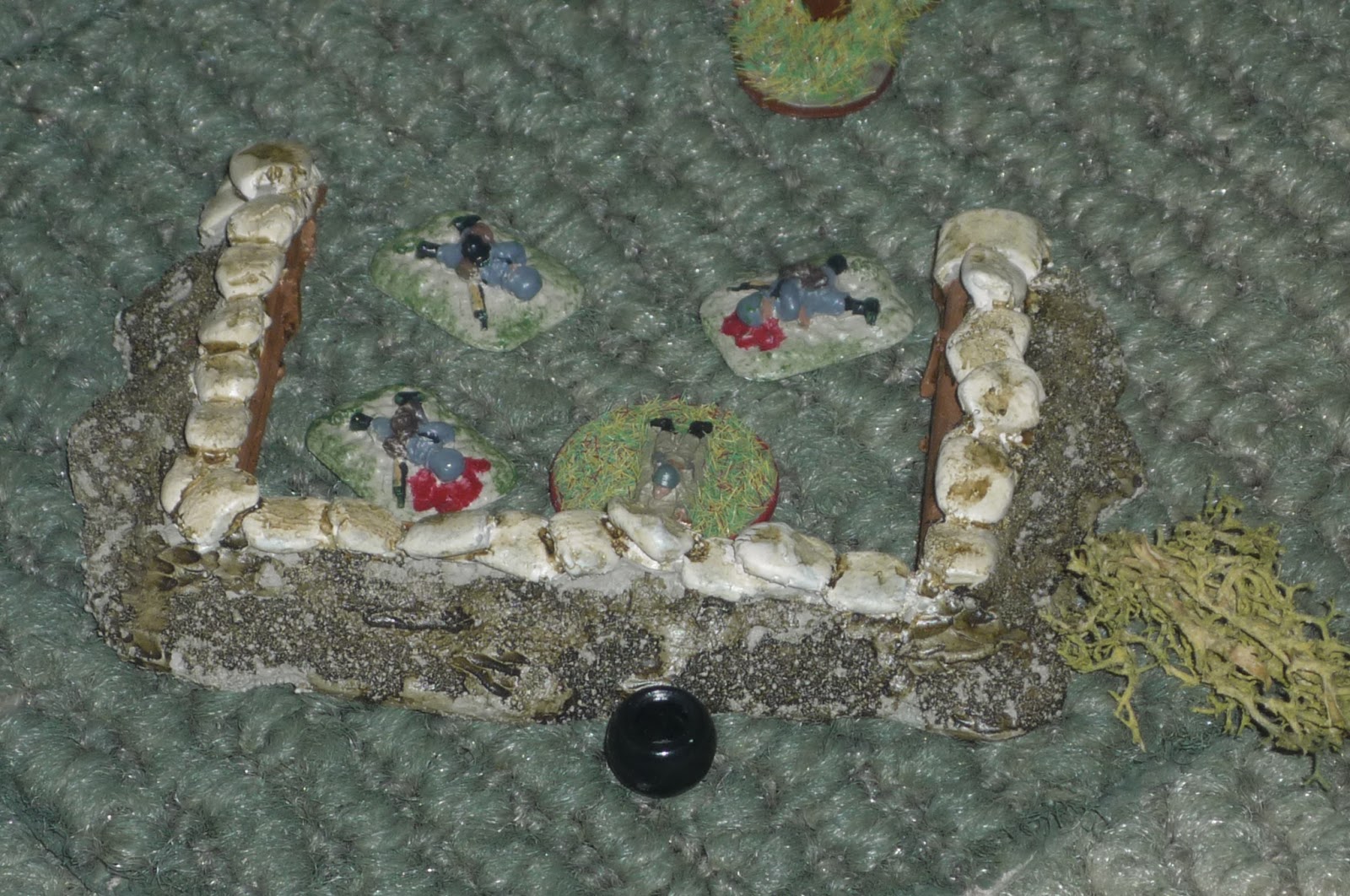 But the grenadier drops a round into the MG position, putting another man down, leaving only one rifleman. 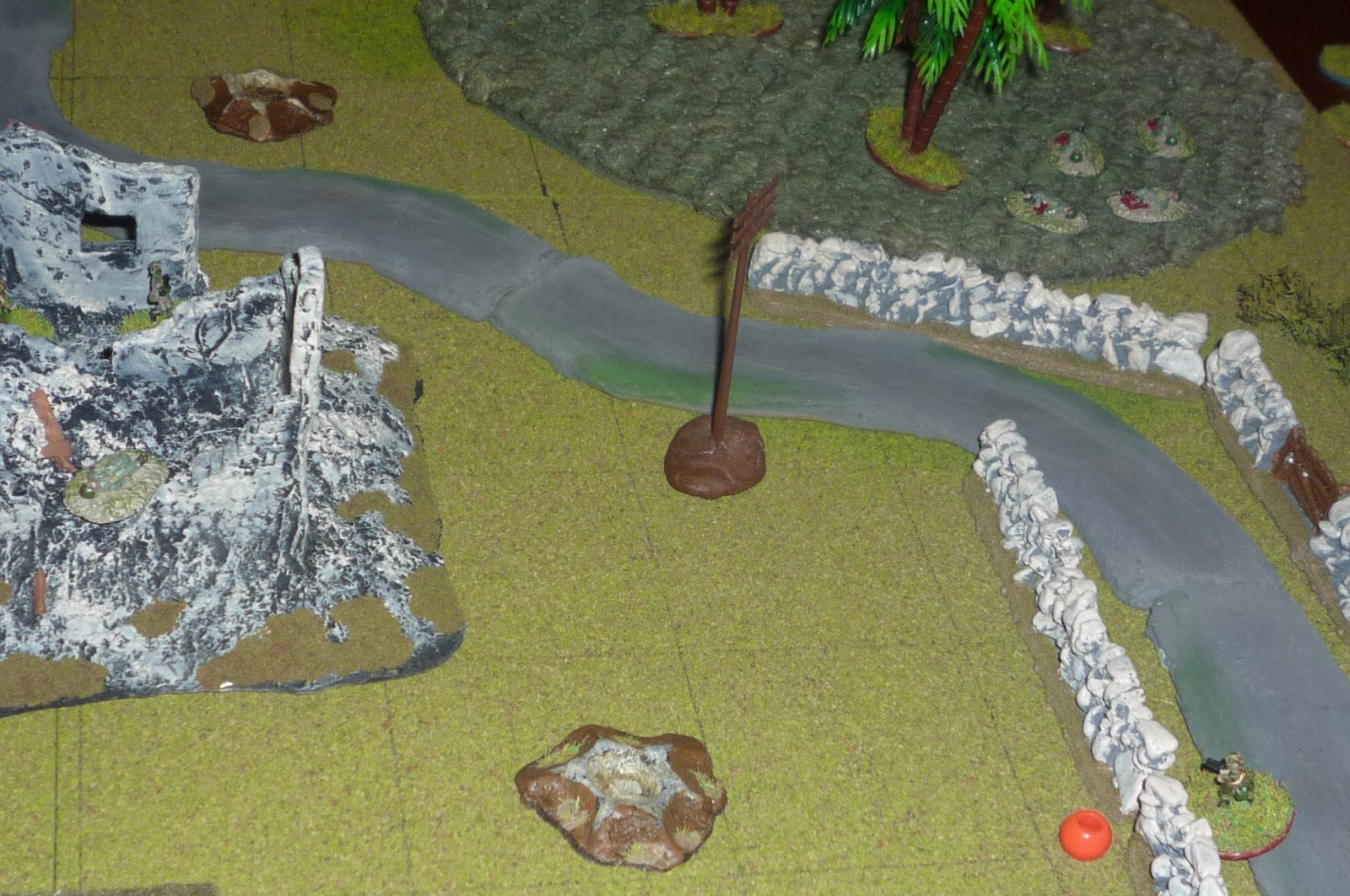 This is countered when the Cubans on the SE hill get in some amazing shooting, killing the remaining US soldier on the SW hill (top right) and the US grenadier (in the house at left)... 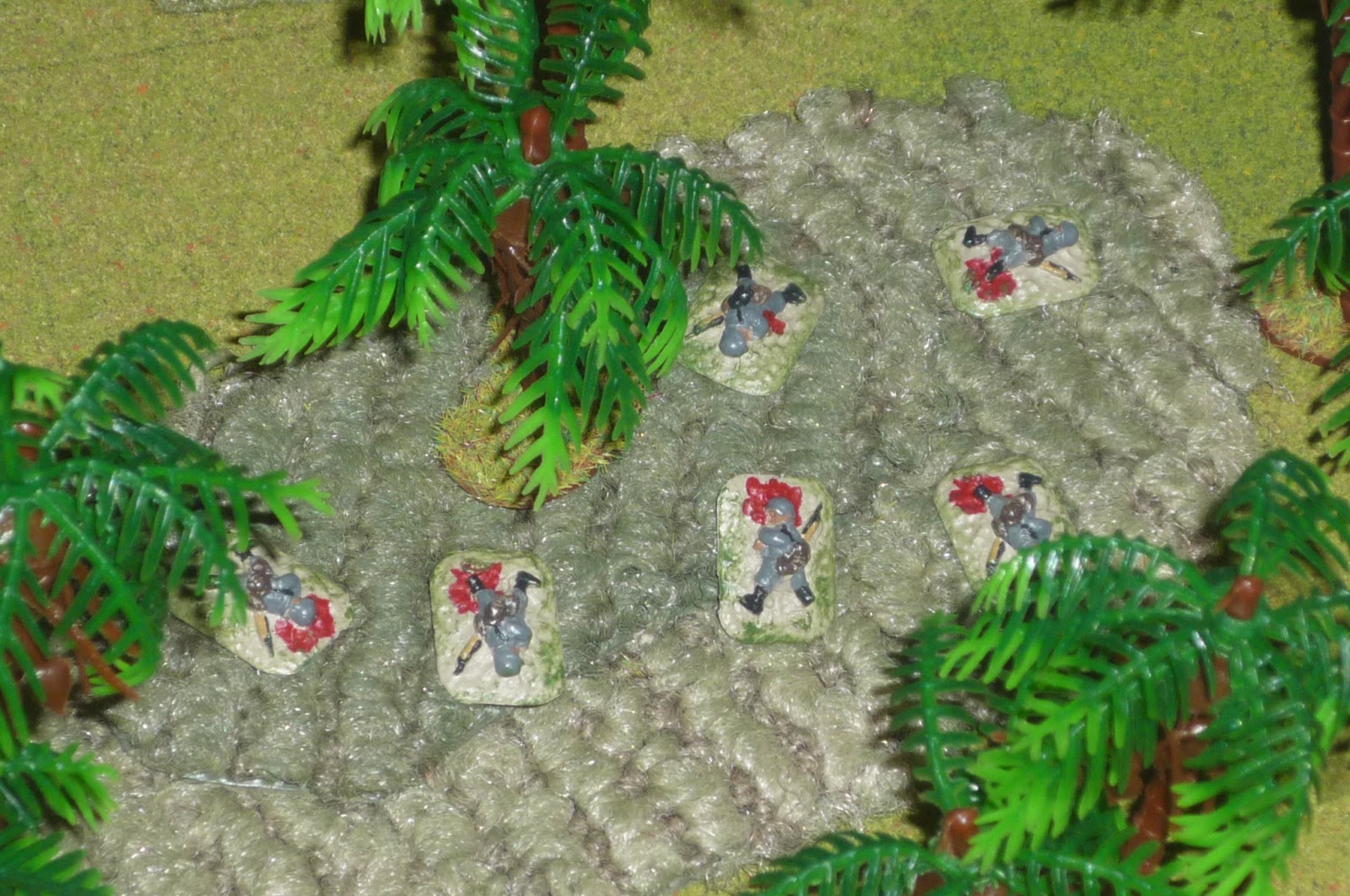 Which is in turn matched by the rifleman and scout in the house returning fire and putting the two remaining Cubans on the SE hill out of the fight. 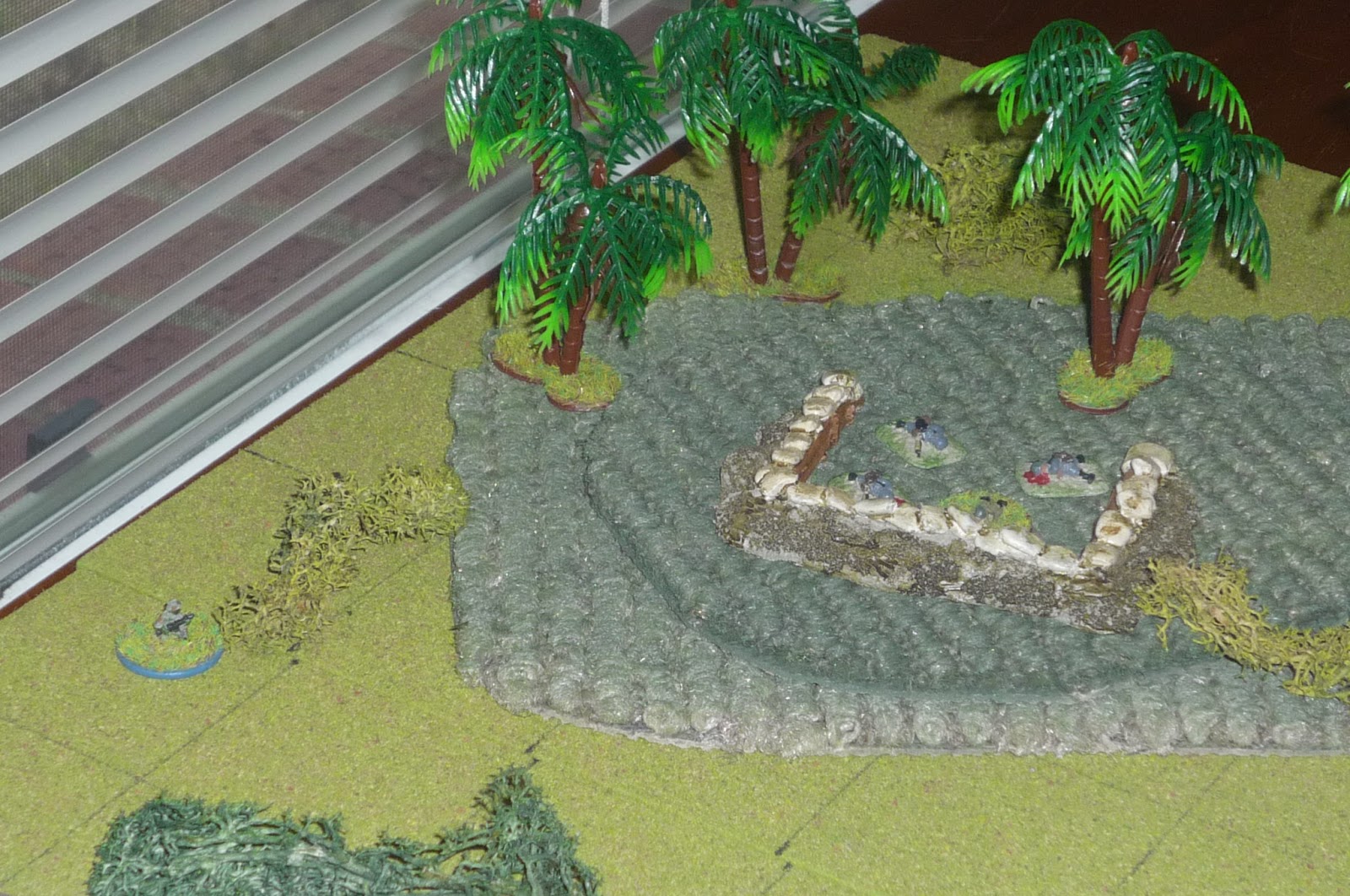 The other scout dashes forward towards the Cuban MG position, where the last remaining Cuban soldier surrenders.

That fight was pretty fun and went pretty fast.  To be clear, I mean the last fight, not the first two :(  And that's what I mean by my initial remarks of "the wife is going to kill me, and it might not have even been worth it").  My gaming time took way to long to only come away with this one batrep, so I'm not very happy.  Furthermore, as fun as this was, I still have the feeling in the back of my mind that my KR-16-based rules (as seen in my popular "All Americans" batreps) could have done the job.

The only real problem I had with my last iteration of rules is that I wasn't getting any pins; guys were either being missed or they were going down (only one pin in the whole fight).  Without pins it's pretty much impossible to go into close combat, and you know how I like close combat.

My final aggravation is that I bought a bunch of new Minifigs Special Forces guys, and I did the Simple Green treatment on my old Minifigs SF guys, but I haven't gotten any of them painted yet.  When am I going to get them, and all my other 3mm and 10mm stuff, done???  I dunno...  But it felt good to get back to gaming.  I need to get into another campaign, it makes it so much more interesting to me.