So, the first tour was an absolute blast, I hope you enjoyed it as much as I did.  To be sure, 24 fights was a lot of battles, probably too many, particularly given the time period 1965-1966, where things were 'relatively' quiet compared to '67, '68, and '69.  I loved the way I played out patrol actions using the cards to dictate the action, timing, enemy force, and random events, it worked awesome (or at least I think so).  I also loved the way I was able to interweave real history into the various tabletop operations and games, without getting too bogged down (I hope).  I suppose I'll never find a perfect set of skirmish rules, but my variation of Five Men at Kursk sure seems to give an exciting fight.  The only problem is that it still can seem a bit disjointed; I forget the actual quote, but Ed Texeira of Nuts!/Two Hour Wargames has written something along the lines of the challenge of skirmish games is having leadership matter, that it's a military op, not a gang fight.  And if I'm having a hard time with true skirmish (a handful of guys per side), I'm REALLY having a hard time finding a set of platoon-level rules I like.  My modifications of KR-16 did a pretty good job for Operation Hastings I think, but there's just still something missing.

The squad started out with fights against the Viet Cong, and then things really ramped up with Operation Utah and the first fights between the USMC and the North Vietnamese Army (NVA), which the squad ran into again during its first trip to the DMZ for Operation Hastings.  The Operation Utah fights were the most fun of the entire first tour for me, just a ton of great action and great scenarios, pulled straight out of the official US Marine Corps history books for Vietnam.

Regarding the troops, of course I was invested in the boys, and I tried to develop other characters, but then typically they would get killed or medically evacuated.  Corporal Little started off very slow, and I didn't thin much of him, but once they got into Operation Utah he became an absolute stud, to the point that I'm taking him with me into the 2nd tour.  I really liked how LCpl Jackson developed as well, and I thought about taking him to the 2nd tour as well, but I didn't want to overplay the fact of Marines extending for multiple tours as the vast majority of Marines served their one tour and then took their butts home like normal, well adjusted humans ;)  So I let Jackson rotate back to 'The World,' but the Correa came on right at the end, so I ended up taking him into the 2nd tour as well, and now he's turned into some sort of  'crack shot,' so I'm really looking forward to seeing how that plays out in future games.

So our four characters will join a squad that already has a bunch of Marines (and a Corpsman), and a whole bunch of South Vietnamese militia members.  I plan on starting them off as totally inept, but as time goes by the Marines are able to get them trained up and have them performing as a competent fighting force, before handing them off to the next CAP platoon and going back to the grunts, just in time to head back up to the DMZ for Operation Buffalo, which I have an affinity for because I met General Libutti while I was in the Marine Corps and he was a Lieutenant with Charlie 1/9 during Operation Buffalo and is mentioned quite a bit in the book of the same name on the first day of fighting, which sees 1/9 pretty much cease to exist (Bravo was completely overrun and then Alpha and Charlie took so many casualties they had to be combined just to form one understrength company).  I have no idea what will happen after that as I'm not sure who will survive the meat grinder up there in Leatherneck Square...

Regarding the squad itself, it was rated to consist of a squad leader, a grenadier, and three four-man fireteams, for a total of 14 men.  During the time period of 5 Oct 1965 to 5 Oct 1966 a total of 36 Marines and Sailors were cycled through the squad's roster.  During that time a total of:
-4 men survived to extend their tours and go to different units
-6 men survived their entire tour and were able to rotate back to the United States
-13 men were wounded and evacuated to the United States
-9 men were killed in action
-4 men were left in the squad with at least six months remaining to carry on their tour

************************************************************************
So, to wrap up the boys' first tour, we last saw the Danny coming out of the field and going to visit Nik in the hospital.  Danny left Nik in the hospital and went back to his barracks, and returned to see Nikki the following day, but Danny couldn't keep it light anymore, time was growing too short, and thus began three straight days of arguing about whether to sign on, or not sign on, for a second tour of duty in the Republic of Vietnam.  Being so close to the end of the his tour, Danny had been pulled out of the field, so he had nothing to do but sit alongside Nik's hospital bed and argue all day and all night about shipping over.  The night of the third day's arguments ended with Danny yelling at Nik that they only had a few days left to ship over, and Nikki replying that Danny was asking him to choose between him and his own mother; "I'm all she's got, and she's the only family I got left on this Earth, Danny."  Danny hissed "she's not all the family you've got, @#$hole," and began walking away, to which Nik responded "If you walk off right now, I don't ever want to see your stupid ass ever again!"

Danny was aggravated enough that he actually didn't go back and see Nikki the next day, and Nik was aggravated enough that it wouldn't have gone well if he had anyway.  But the following day Danny walked into the hospital and was shocked at what he saw; Nik was lying there, staring off into space, eyes red, tears running down his face.  Danny felt a sudden urgency and moved close to his brother, and asked what was wrong; Nik opened his mouth to reply but no words came out, he simply pointed to a document lying on the bed.  Danny's heart jumped into his throat; it was a Red Cross message.  Danny picked it up, looking to scan it, but it was only two sentences long.  "Nik, I'm so sorry..."

Danny sat down and held his friend's hand, and all through he rest of the day the two sat there in silence.  Finally, the sun nearly down, the walls purple, Nikki's voice croaked: "I can't believe she's gone, that I didn't get to see her again..."  Danny, feeling more helpless than any other point during his life, just nodded silently, and the two boys sat there until a nurse came in to check on Nik a couple hours later.  The nurse took care of whatever it was she was there for and departed, looking as if she wanted to say something, but not, and then Nik finally spoke again: "Let's go."  "What?" Danny replied.  Nik achingly sat up and began pulling bandages off and needles out (which is INCREDIBLY painful when you don't know what you're doing, by the way), with Danny exclaiming "what the hell are you doing?"  "Well, I figure we gotta get over to S-1 and sign our papers to ship over," Nik replied. 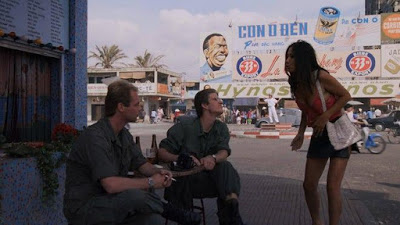 Following that they returned to Vietnam and then began their 30-day R&R, choosing to go party in Hong Kong.

Before they left though, they had several discussions with the Career Planner, the Battalion Sergeant Major, the Ops O, and the Admin O; Nik was convinced they needed to do something different for a bit, and the boys had both really enjoyed Operation Golden Fleece (at least up until the point Nikki got shot), where they were working hand in hand with the local Vietnamese to protect them from the Viet Cong and make their lives better.  In these discussion they learned about the 9th Marines' 'Combined Action Program,' where a squad of Marines would live in a local village and form a 'Combined Action Platoon' with local militia from that village to safeguard the villagers from the VC.  This sounded right up the boys' alley, so they immediately signed up and were accepted; they even took it back to the platoon to see if anyone was willing to come with them.  They'd become very tight with Sergeant Rob Little and LCpl "Poncho" Correa, who both extended their tours in Vietnam in order to go with Nik and Danny.

Rob and Poncho remained with the squad until the boys returned from R&R right after Thanksgiving 1966, and then all four attended mandatory CAP training during the month of December.  The training consisted of education on Vietnamese key words/phrases, culture, and customs, and because the US Marine squad operates relatively autonomously, they were given focused training on leadership, communications, fire support, intelligence collection, weapons, and combat first aid.  Following completion of their training, the boys, Rob, and Poncho, were given a few days off for Christmas, the moved south to Quang Ngai Province to check in with local US Marine forces in the area and get a turnover, arriving at their assigned CAP location on 2 January 1967.  They were assigned to (fake) CAP 7-7-9, in the (fake) village of Duc Pho Linh, where they joined 11 other Marines, 1 Navy Corpsman, and 35 Popular Force Militia troops assigned to the defense of the village.

V/R,
Jack
EDIT: Adding a few pics of my WWII Pacific project for a buddy. 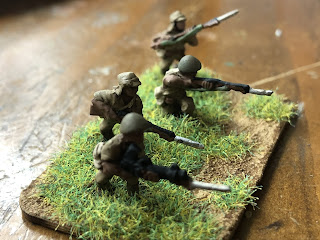 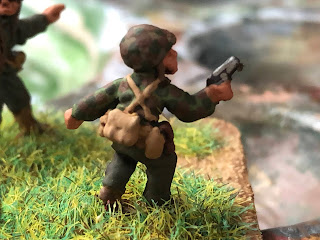 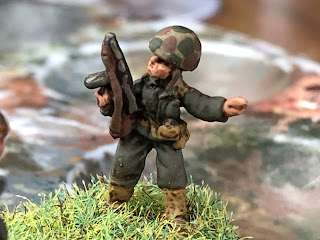 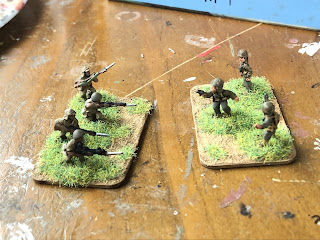 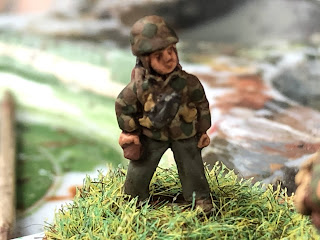