There and Back Again with 6mm WWII for NW Europe

So, I've been steadily building up WWII forces in 6mm for NW Europe for... oh, about ten years now.  Indeed, some of my first batreps were 6mm WWII (https://blackhawkhet.blogspot.com/2013/08/an-old-battle-report-using-tfls.html).  I started with them based, then I unbased them, then I re-based them, but this time in multiples (i.e., three vehicles per base), then I unbased them again.  I played a few games with them (https://hakunamatatawars.blogspot.com/search/label/Battle%20of%20the%20Bulge), and that convinced me to, of course, re-base them.  So I spent a small chunk of time this past weekend playing a few games (dogfights over the South Pacific, https://oldleadbreed.blogspot.com/2019/10/coral-sea-day-2-fight-6.html), then a large chunk of time re-basing these bad boys.  I'm pretty happy with how they turned out, so I figured I'd share them.  Again... 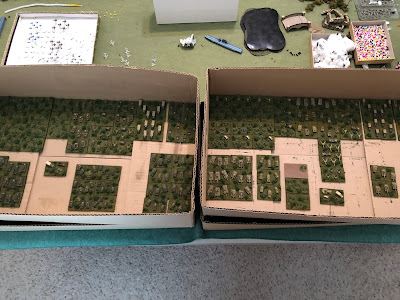 The whole shebang, Allies on the left, Germans on the right. 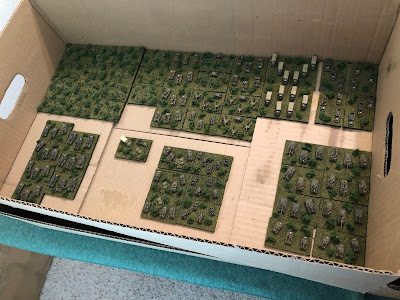 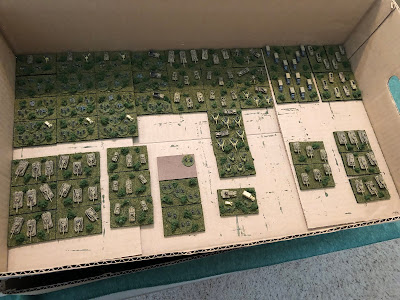 And the German force. 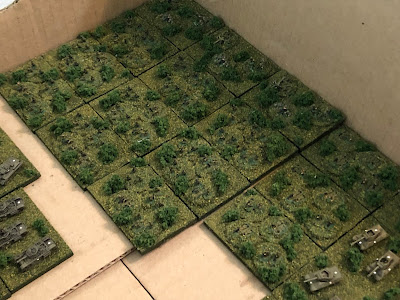 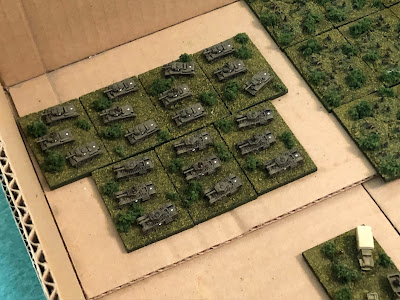 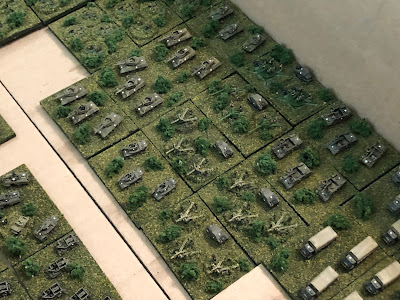 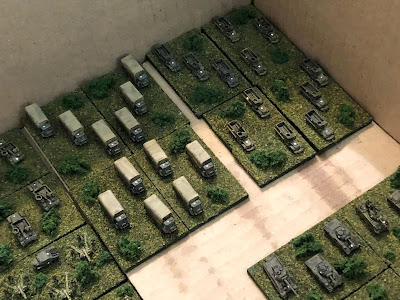 Four stands each of trucks and halftracks. 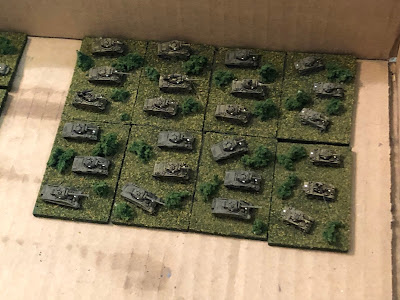 Two battalions of Shermans, one with M4 76mm guns, the other with Fireflies.  Each has a company of M5 Stuarts. 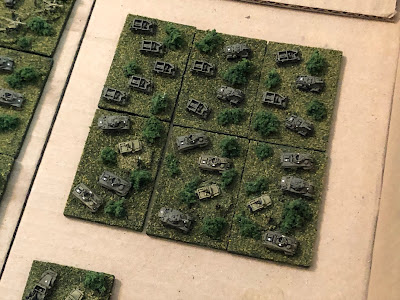 A battalion of British recce with Staghounds and Bren carriers, and a battalion of US cavalry with M8 armored cars, jeeps, and M5 Stuarts. 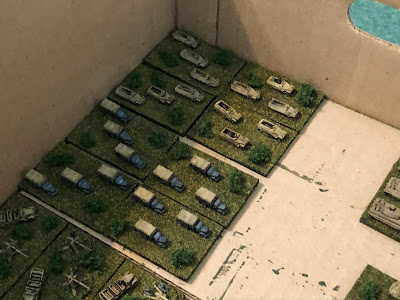 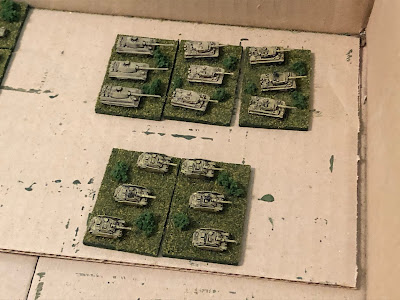 A battalion of Tigers (two x Tiger I and one x Tiger II) and two companies of Stug IIIs. 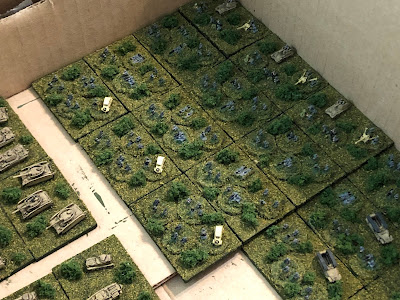 Three battalions of infantry and a battalion of engineers (with engineer Sdkfz 251, bottom right). 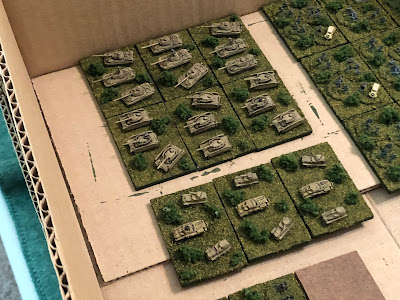 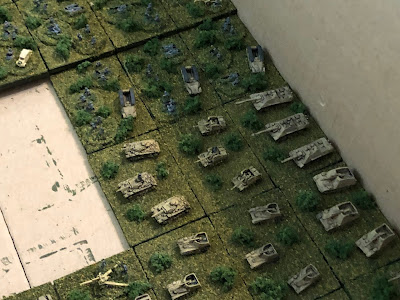 A stand of Pz III Flammpanzers, a stand of Marders, and a stand of Jagdpanthers. 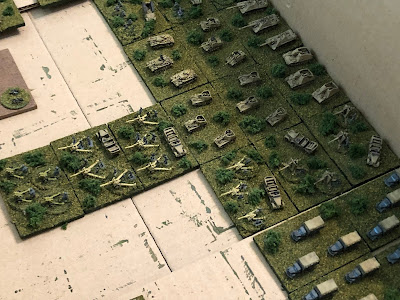 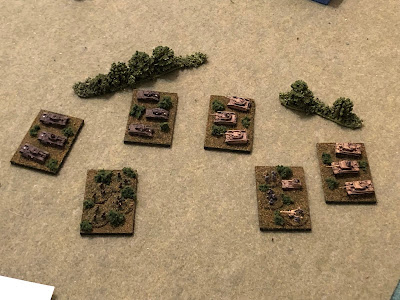 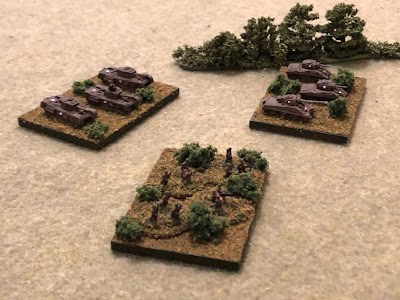 British infantry and Shermans move up, supported by Churchills. 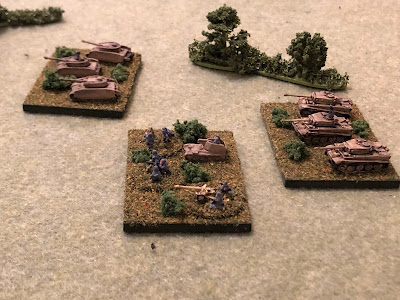 While Pz IVs and a German Wpns Co hold on, Tigers in reserve. 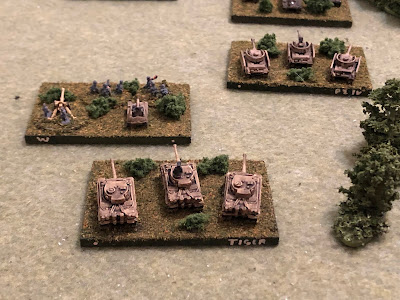 I really did my best to make these look nice, bought a glue gun and stuck clump foliage on the bases, painted the edges of the bases green, labeled them with white paint.  It took awhile to glue them on, flock, glue the foliage, paint the edges, and label them, but it wasn't as bad as I expected, and I think it was worth it. 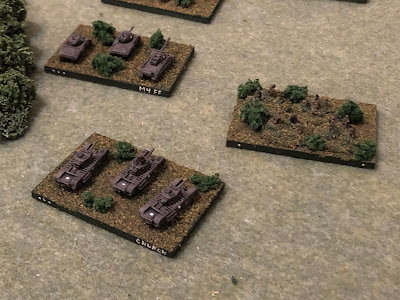 A look at the Allied base labels.

Well, hope you like them, and, as wargamers, can empathize with all the re-basing pain.  I hope to get these into action in Normandy ASAP, but have got some other projects in the hopper as well.  Of course...