Well, Saturday was too busy to get anything done, and the time I had Sunday I spent painting instead of playing.  I recently finally made a purchase of 15mm Peter Pig Modern USMC after online stalking them for over a year.  As I've been very much into skirmish gaming lately, I bought enough of these little Piggy troops to make up four different skirmish forces of about a platoon each.  They were easy to clean up and mount, so I primed them and painted up four test figures, one for each force, as each force will be in different uniform for different clime and/or era.

Here are the photos, I'd love to hear what you think. 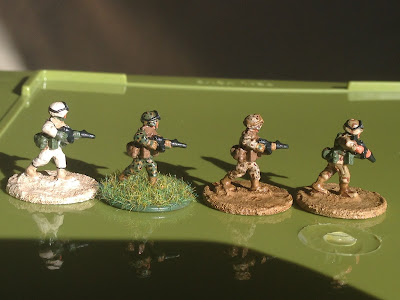 And here they are, the four testers for the four different forces.  From left to right, we have a guy all set up for some Arctic warfare, then a guy in temperate MARPAT, then desert MARPAT, and finally a guy in desert tri-color.  The arctic and temperate guys are probably self explanatory, but the reason for having desert troops in MARPAT and tri-colors is for use in different eras.  The MARPAT guy will be 2004 and later, while the tri-color guy will be used between Desert Storm and early OEF/OIF, including Somalia in '91.

Here's some closeups of each guy.  I picked four guys out, but screwed up; I wanted to have all four guys in the same pose, but I did three of one pose and one of another.  Having said that, they're all basic riflemen with M-16A4s (though I'll pass them off for M-16A2s for the Desert tri-color force). 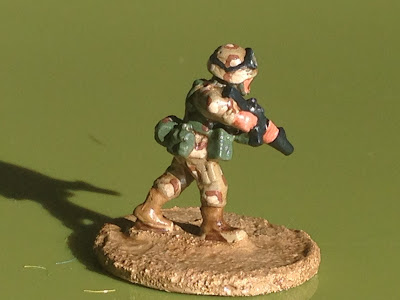 First up is the desert tri-color force.  The uniform is desert sand with sand splotches and military brown swirls.  I did the flak and gear in Italian green, with some Italian Dark Brown swirls on the vest (could serve as PASGT, RBA, and the green Interceptor).  He's also got the old, all-black goggles. 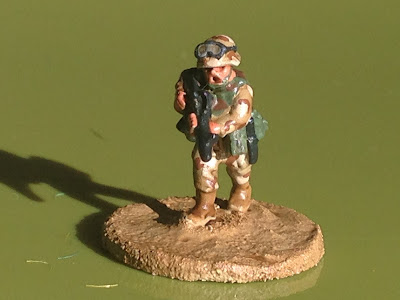 Fore.  You can see the all-black Ka-Bar fighting knife on the right (his left side). 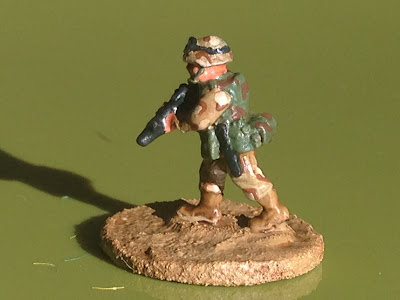 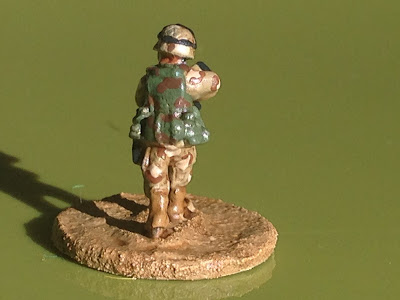 And the last shot is aft.  Previously I'd done up the vest with dark brown and desert yellow swirls, but it really confused the camo (yes, the point of camo is to confuse, but it didn't look right).  I'm pretty happy with how this test turned out, looks suitably desert to me. 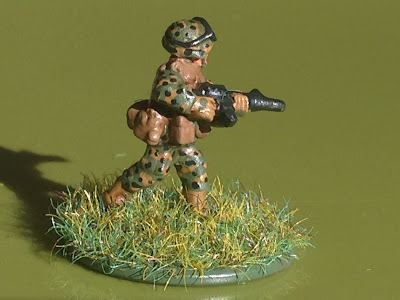 Next up is the temperate MARPAT, which is suitable for about 04 to present.  I used Italian Green and Wood with black dots for the uniform, Wood for the boots and gloves, and Dark Tan for the Interceptor vest and gear.  The Dark Tan looks a little off from the real life 'Coyote Brown,' but I gotta tell you I'm very happy with how this uniform turned out.  I think this one looks best of them all. 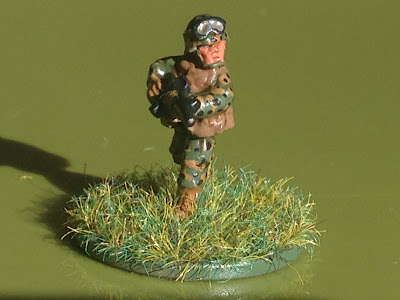 Fore.  I used my usual static grass for the base, which is a penny.  This will serve him all over Europe, Asia, and part of Africa.  What I'm thinking to do is follow a platoon through various fictional, modern-day contingency operations which can take them all over the world using Five Men at Kursk (modified for modern), which is the reason for the winter, temperate, and desert forces.  I'm not sure if I'm going to lump this under the Cuba Libre umbrella or start something different, maybe just a modern USMC MEU. 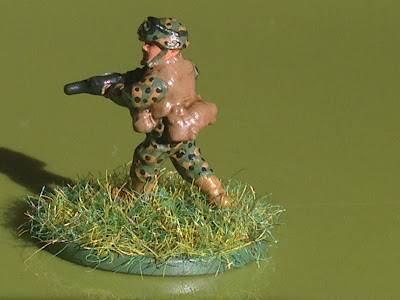 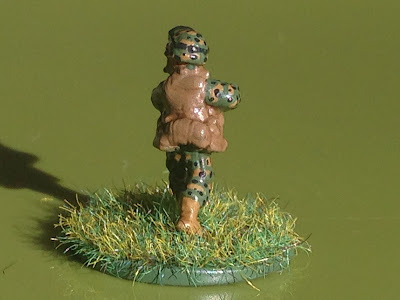 And aft.  Again, very happy with how this turned out. 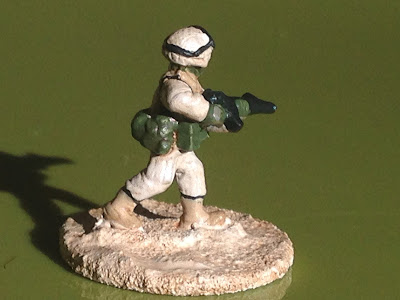 Here we go with the Arctic trooper.  For the uniform I simply primed him white, gave him Italian Green gear, then painted the boots and vest Sand.  The "Mickey Mouse" or "Bunny Boots" are actually a yellowish-white in real life, so this works, and my line of thinking for painting the vest Sand was that it would be a cover over his green or Coyote Brown vest.  I think it works.  I put black line over the boots and around the vest; I think it looks okay, but I think in when I do the whole force I'll get rid of it.  Let me know what you think. 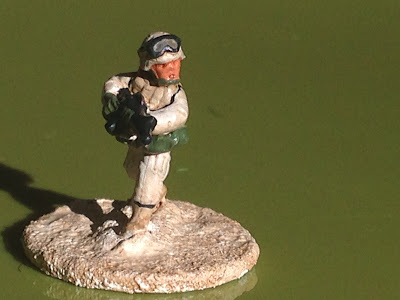 Fore.  Here you get a little better look at how the boots and vest are off color from the rest of the uniform. 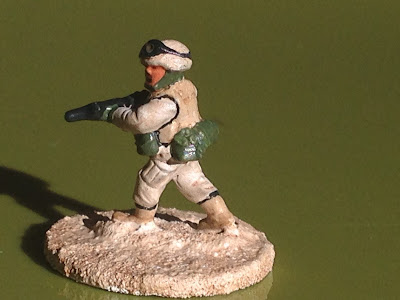 The left side.  Here you can see I also put an Italian Green hood on him (under his helmet, of course). 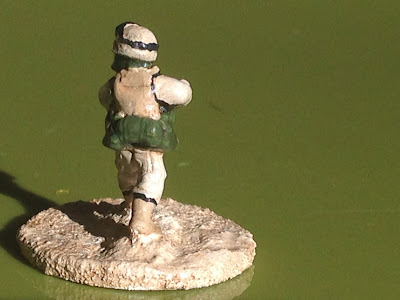 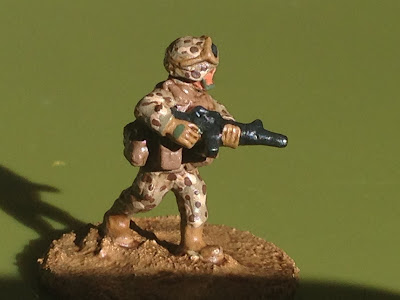 The last troop up is the Desert MARPAT, and this is the one that I'm least happy with.  I thought I'd figured out Desert MARPAT; my attempts in 20mm look spot on (to me), and these pics are my making me re-think my position (they might look better than in real life!), but for some reason it just doesn't look right to me.  It almost looks like the old Aussie Desert 'duckhunter' camo...

Anyway, I used Khaki and Sand with Italian Dark Brown spots for the uniform, Dark Tan for the vest and gear, and Wood for the boots, goggles, and gloves. 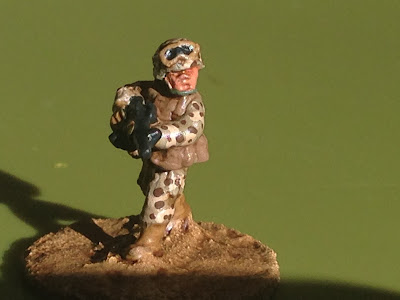 Fore.  Maybe I have too many dots and not enough dashes in the camo? 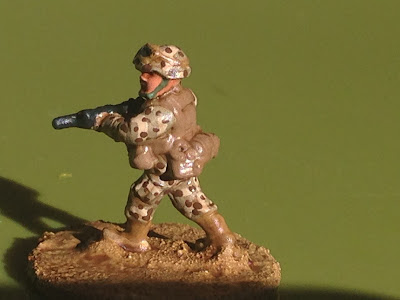 The left side.  These Peter Pig troops are really fantastic, love the sculpts, great poses and very crisp, clean lines. 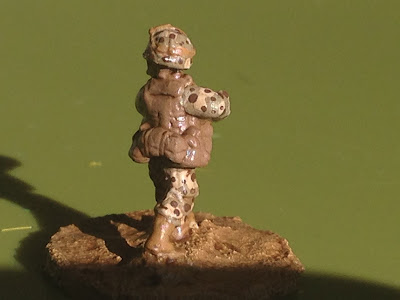 And aft, last pic.  All the gear and weapons look great, everything is easy to see and paint, and looks right.  I only have two extraordinarily small quibbles: 1) in the AT-4 pack, one of the guys carrying a rocket is also carrying a SAW.  Now, that's not out of the realm of possibility, but I can't recall ever seeing a SAW gunner carrying an AT-4.  He had more important things to do.  2) One of the leader figures has a pistol; he looks to be right handed (that's where his rifle is), but the pistol is on his left hip.  The holster looks kinda screwy (one of the Corpsmen has a pistol holster on his right side and it looks perfect), and the pistol looks to me like a revolver.  Maybe a guy carrying a personal weapon?

Like I said, truly minor quibbles; I actually carved the SAW drum off and just painted those AT-4 guys up as riflemen, and the left-side holster doesn't draw any undue attention.

That's all for now, we'll see what this week brings, and then I'm out of town on business for the following two weeks.  Please let me know what you think of these guys.