And here's the last installment (so far, at least) of my Eureka Miniatures 15mm forces, the Chechens.  Like the Eureka Aussies and Russians, they will also see service in my campaign in Cronistria, as either Cronistrian Democratic Militia (good guys) or Cronistrian People's Army (bad guys), or both.

Once again the sculpts are clean and crisp with just a tiny bit of flash.  But in my haste that tiny bit of flash caused me a little trouble and I lost two AK barrels.  But they'll still work, and I just need to be more careful in the future.  As I mentioned previously, I'll definitely be placing future orders with Eureka Minis USA: I plan on someday doing an exact copy of this purchase (Aussies, Russians, and Chechens) then painting them up in winter colors, and I also just bought a bunch of Peter Pig WWII US Marines, and I'm going to place an order (in the next week or two) for some Eureka Japanese, which look great and should fit perfectly with the Peter Pig troops. 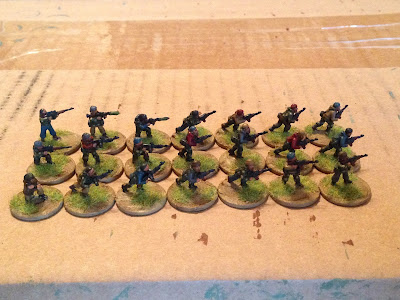 The whole force: a one-man leader pack, a two-man sniper pack, a two-man RPG pack, a four-man PKM pack, and two of the 6-man riflemen packs.  Done up on desert-sand looking bases with some grass; not sure exactly why I painted the dirt desert sand, but it will work.  I painted the force up in a mix of military and civilian clothing/gear; each guy is wearing either a Russian camo-uniform blouse or set of trousers, then a civilian shirt/jacket or pants, along with civilian headgear of some sort.

On a side note, I hate painting irregulars and special forces, anything where the gear and clothing is not uniform.  It's so much easier to just line them up and assembly line paint.  But I'm happy with how they turned out.  Let's get to the poses. 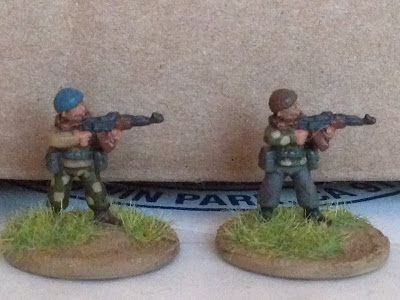 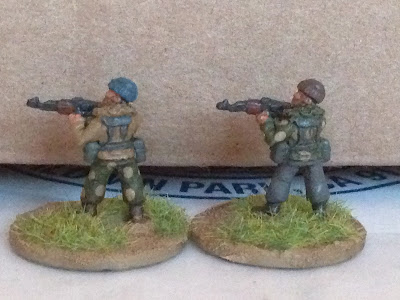 Reverse, where you see both are wearing Russian load bearing equipment as well.  You can see how clean and crisp the sculpts are, very easy to paint up and look great.  Here you can also barely see the facial hair on these guys. 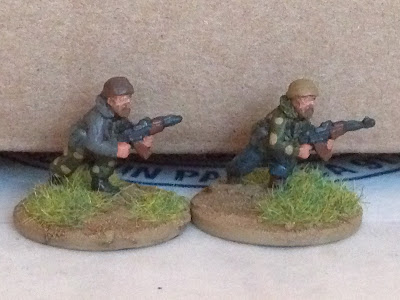 Two more riflemen, this time moving forward at the crouch.  At left you see one of the barrels I butchered, but it doesn't look too bad I think.  You can see the beards a bit better here; I probably should have used a darker color on them... 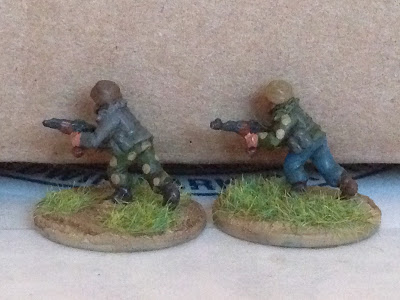 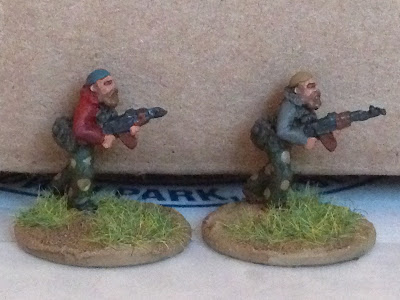 Another rifleman advancing with AK, and the other screwed up barrel.  Heck, in the closeup you can actually see I didn't get all the flash off the end of the right guy's barrel!  Damned close ups! 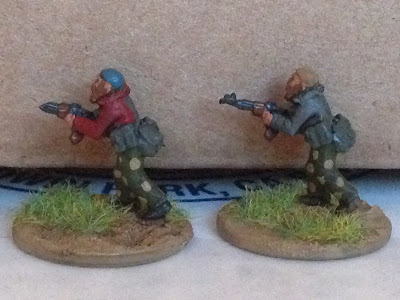 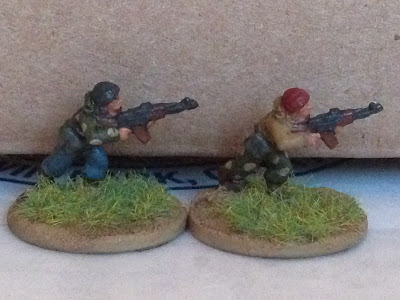 Two more riflemen moving forward at the ready carry (rifle up, searching and assessing targets over your sights). 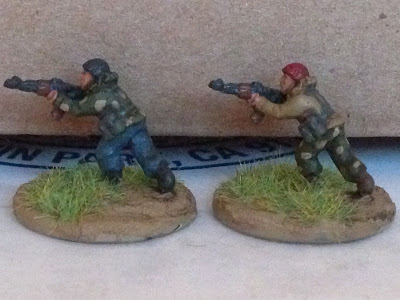 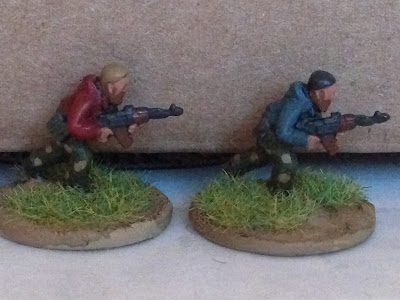 Another pair of riflemen moving forward, AKs at the hip. 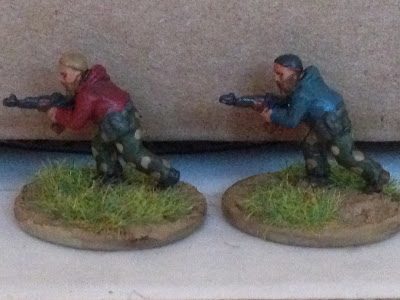 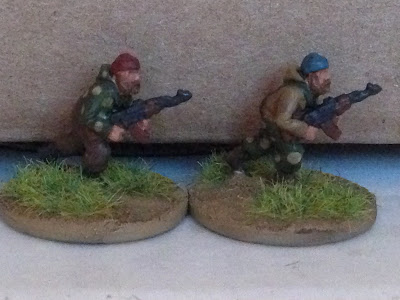 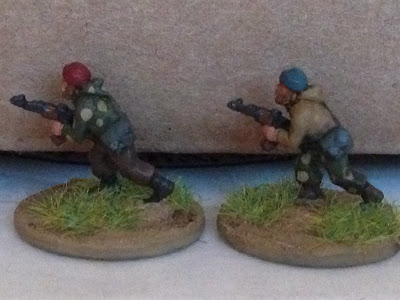 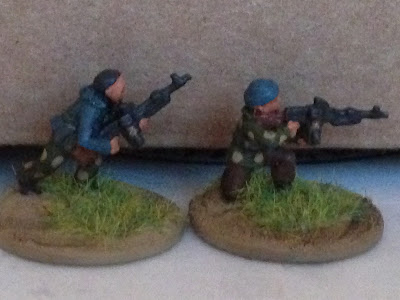 The first two machine gunners, both with PKMs, one advancing and one in a kneeling position. 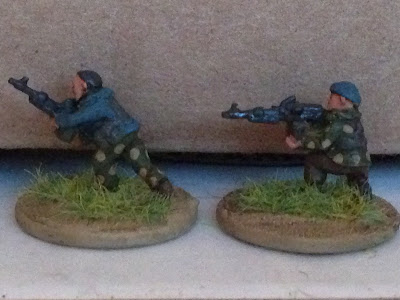 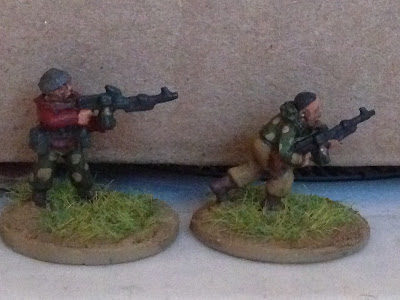 Other two machine gunners, one assault firing and the other moving forward.  The one one the right looks similar to the previous advancing machine gunner pose, but is a different sculpt. 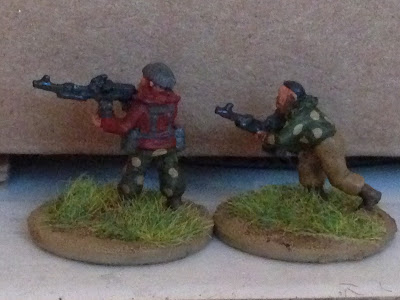 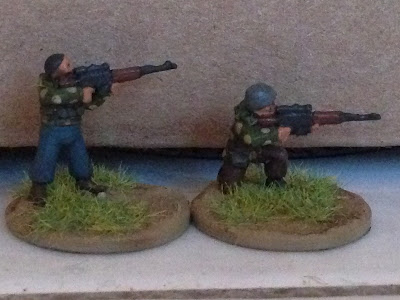 Two snipers, both with Dragunovs.  Not to quibble, but those barrels look just a tad long to me. 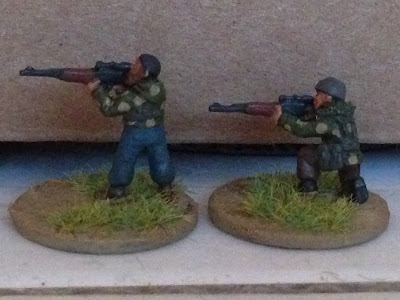 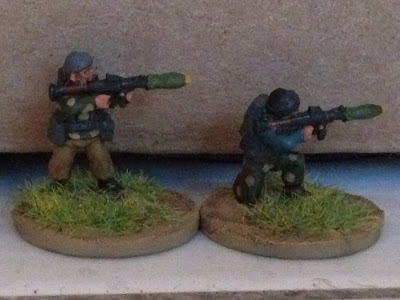 The two RPG gunners, really love these two poses, though the tube looks just a hair short (it seems like it should extend just a little more beyond the firing shoulder). 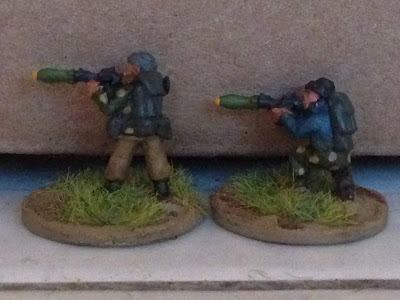 Reverse.  Yeah, I love putting yellow on stuff just to add some color.  I love the packs; I think this is the first time I've ever actually seen 10mm or 15mm troops with the RPG pack for extra rockets. 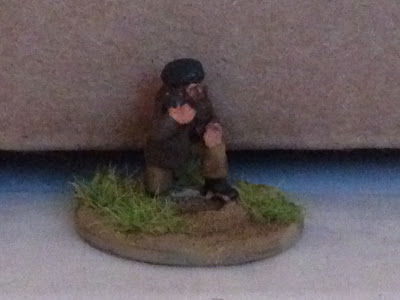 And lastly we come to the solitary leader, kneeling and talking on a 90s-era brick cellphone.  Or a handset radio ;) 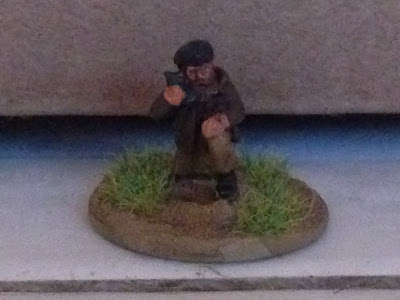 Looking at him head-on, at his large and illustrious beard. 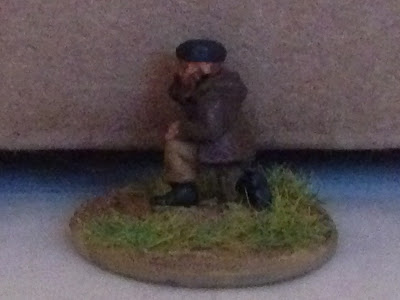 And the reverse.  Pretty cool character, I like him.

I like the whole force actually, and can't wait to get them on the table.  I need to fight some more 20mm battles in Cronistria, then the war will switch to 15mm.  As part of this, I'm also waiting for some awesome stuff I ordered for my birthday; it will ship this Saturday, should have it next week sometime.  This evening I got home from work a bit early so I put the finishing touches on some 'old' QRF US infantry in desert gear, and a Battlefront US Mech Plt in woodland camo.  I'll get them photographed and posted here as soon as possible.

Thanks for looking and, as always, comments are welcome!