In the late hours of 1 February 1990, D-Day in the Cuban War of Liberation, Generalissimo Waraldonez sat in this Command Post(near Playa Colorada, on the western end of the island), ruminating on the day's activities, and what the morrow would bring, when he felt the presence of another.  "Excuse me, Sir, it is time for your brief."  The General motioned them in, and so the CLA's G-1 (Administration), G-2 (Intelligence), G-3 (Operations), and G-4 (Logistics) entered the General's berthing area and provided him their official briefing.

First up, friendly dispositions were provided by the G-3, and the G-1 chimed in with their status: 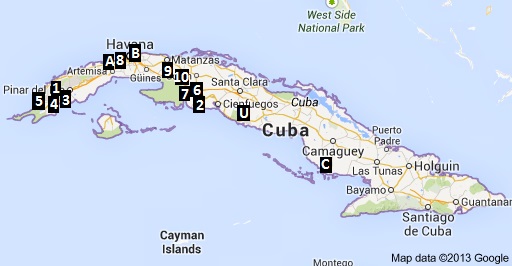 The G-3 got up and briefed, hitting the highlights of the OpOrd:
In the west (Playa Colorada landing site), A Sqdn SOF took out an early warning radar, then 1st Airborne dropped in and sealed off the beaches from the Pinar del Rio garrison.  3rd Inf Bn fought its way ashore, which allowed 4th Inf Bn and 5th Armored Bn to come ashore.  1st Airborne fought off enemy armored counterattacks attempting to reach the beachhead, and one Company from 4th Inf Bn was committed to this fight.  As of 2300, 1st Airborne and 3rd and 4th Inf Bns are on line, with 5th Armored Bn behind them.

In Havana, B Sqdn SOF got beat up and was unable to knock out a key SAM battery, and A Sqdn SOF got beat up taking the Radio Station.  They're still there, and broadcasting, but they're hanging on by a thread.  8th PF Bn was successful in turning back an enemy armored column heading west, but that can't last, they're too lightly equipped.

In the center (Bay of Pigs landing site), 2nd Abn Bn jumped in and sealed the beach from the Cienfuegos garrison, then 6th Inf Bn fought its way ashore.  6th and 7th Inf Bns got ashore, but 2nd Abn was hard-pressed by an enemy armored column from Cienfuegos, so one company each from 6th and 7th Inf Bns was committed.  As a matter of fact, Colonel Barnejesus is not at all pleased with your decision to helo insert 2nd Air Assault Company into the enemy's 6th Armored Battalion's path of retreat; 2nd Air Assault got beat up pretty damn bad...

In the north center, 10th PF Bn captured a key bridge in the Pedroso area, key to cutting off the strong forces in the east at Camaguey, Holguin, and Santiago de Cuba.  But the Bn Cmdr for 9th PF Bn got a little too froggy in his mission to tie down the Matanzas garrison, got G Company beat up pretty bad and got himself captured.

In the near east, Colonel Huistrella and his boys of the Unconventional Warfare Group have been doing some hellacious fighting up in the mountains to keep the enemy from reinforcing Cienfuegos to push on the Bay of Pigs.  They're fighting like savages in the Escambray, but they're pretty badly beat up, and I don't know how much longer they can hold on.  Those SF troopers are lightly armed, not designed to go up against tanks.

In the far east, Captain Bosanova's C Sqdn SOF did a fantastic job.  They infiltrated that huge base out there at Santiago de Cuba, then put the comm center out of action and walked off the base like it was cool.  They are now just due south of Camaguey, working their way west to link up and help out Colonel Huistrella.

All in all, we're doing good.  Both beachheads are secure.  The western force is ready to start its march on Havana, but the pressing issue there is A Sqdn SOF cut off in the city.  With your permission, I'd like to have 8th PF Bn drop its blocking mission, let the western force deal with the enemy armor; hell, it works out better for us if they move their armor out of Havana.  In any case, have 8th PF Bn link up with B Sqdn SOF and infiltrate into Havana to link up and reinforce A Sqdn SOF at the Radio Station.

The General perked up: "Is the Radio Station that important, they've been broadcasting all day.  The way I see it, they did their job, why don't we let them egress on foot out of the city and link up with B Sqdn SOF and 8th PF Bn?"

The G-4 spoke up: "Sir, if it's at all combat feasible," looking at the G-3, who shook his head 'yes,' "we'd like to keep the Radio Station broadcasting.  First, it's letting the whole country know what's going on is real; the G-2 says word is getting out, and we're already seeing large number of Castro's soldiers deserting, and we're seeing large numbers of locals wanting to join in and fight.  Second, it's letting the world know what's happening here is real, and I can assure you it's helping to solve a lot of our expected supply problems, and the G-1 reports HUGE numbers of exiles from the States and all over Central America are volunteering to join the fight.  In short, Sir, this is a huge morale issue for us."

The G-3 chimed in: "Sir, if you bless off on my plan, 8th PF Bn will be able to bolster the two SOF Squadrons at the Radio Station, and they'll be able to hold long enough for the Western Force to get into Havana.  And we're looking good in the center as well, no reason to believe the enemy forces in the east could threaten Havana, right?" The G-2 shook his head in the affirmative.

"Alright, make it happen, send the orders to 8th PF and B Squadron to get into the capital as quick as possible.  Colonel Quilveras (CO of the SOF) is gonna need it."

The G-1 and G-2 briefed casualties next:
The CLA suffered 315 casualties, had five men captured, lost one HMG Jeep, and one AAV.  The casualties included two Battalion Commanders and three Company Commanders ('walking wounded' were not included in this tally). 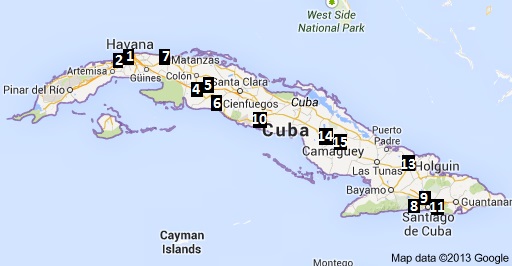 The G-2 concluded: "On a side note, we received some source reporting that confirmed some sketchy reports by A Sqdn SOF: apparently there are Iranians on the ground here, in Havana, and they actively engaged our men.  I'm not sure what to make of this General; I don't think it means much in our campaign, I don't believe there are that many of them, but why fight us?"

"One more thing, General: we are receiving an unexpected boost from the Americans.  Sources report that part of the lack of movement by the regime garrisons at Holguin, Camaguey, and Santiago de Cuba is due to the fact the Castros believe the Americans are in league with us, and will be launching an attack from their Guantanamo facility at any moment."  This drew smiles all around the table.  "We'll take every advantage we can, gentlemen."

The General spoke up:
1.  As we discussed, I want 8th PF Bn and B Sqdn SOF to link up and reinforce A Sqdn SOF at the Radio Station.
2.  I want the Western Force (Playa Colorada landing site) to push forward, and I want 5th Armored in the lead, ready to deal with those T-72s when they come out.
3.  I want the Center Force (Bay of Pigs landing site) to hold fast, and clean out the remnants of the enemy's 4th and 5th Battalion's in the center.  Wipe'em out, but don't move on Cienfuegos, just hold the line until we're ready.
4.  In the north center, tell 9th and 10th PF Battalions to try to box Matanzas in.  But don't attack their damn base again!
5.  In the east, tell Captain Bosanova that his boys need to hurry up and get to the UWG, Colonel Huistrella's boys need help fast, but it can't be today, we've got to take care of Havana, and not let Cienfuegos mess that up for us.  So tell Colonel Huistrella to hold tight, they're doing a great job.  If tomorrow goes well, let's see if we can't get someone to them, and it's gonna have to be creative as the Cienfuegos problem might take awhile to figure out.  So maybe we pull 2nd Marines out, and they make another amphibious landing, or maybe we pull a company from 2nd Airborne out, and they drop in.  I dunno, figure it out!  However we do it, we've got to get Huistrella's boys some help, and soon.  I want fresh troops in the mountains with them by D +2.

Those are my orders...