I finished up another NATO brigade, representing my West German contingent.  I'm a little ashamed with my laziness, but I'll get over it.  What I mean is, the vast majority of the vehicles were given a dark green-gray spray prime, then heavily dry-brushed with a lighter green-gray.  But, when I primed I forgot an M-577 command track, a Gepard AA vehicle, an ADATs SAM vehicle (standing in for the Rolands I don't have), and two helos, which had been primed khaki.  I didn't feel like going and spraying them (if I even have more of that green-gray spray paint).  So, these guys got a NATO three-color camo scheme.  Which turned out well, it just doesn't match the rest of the force.  But it gives it character, right? ;)

Anyway, let's get to it: 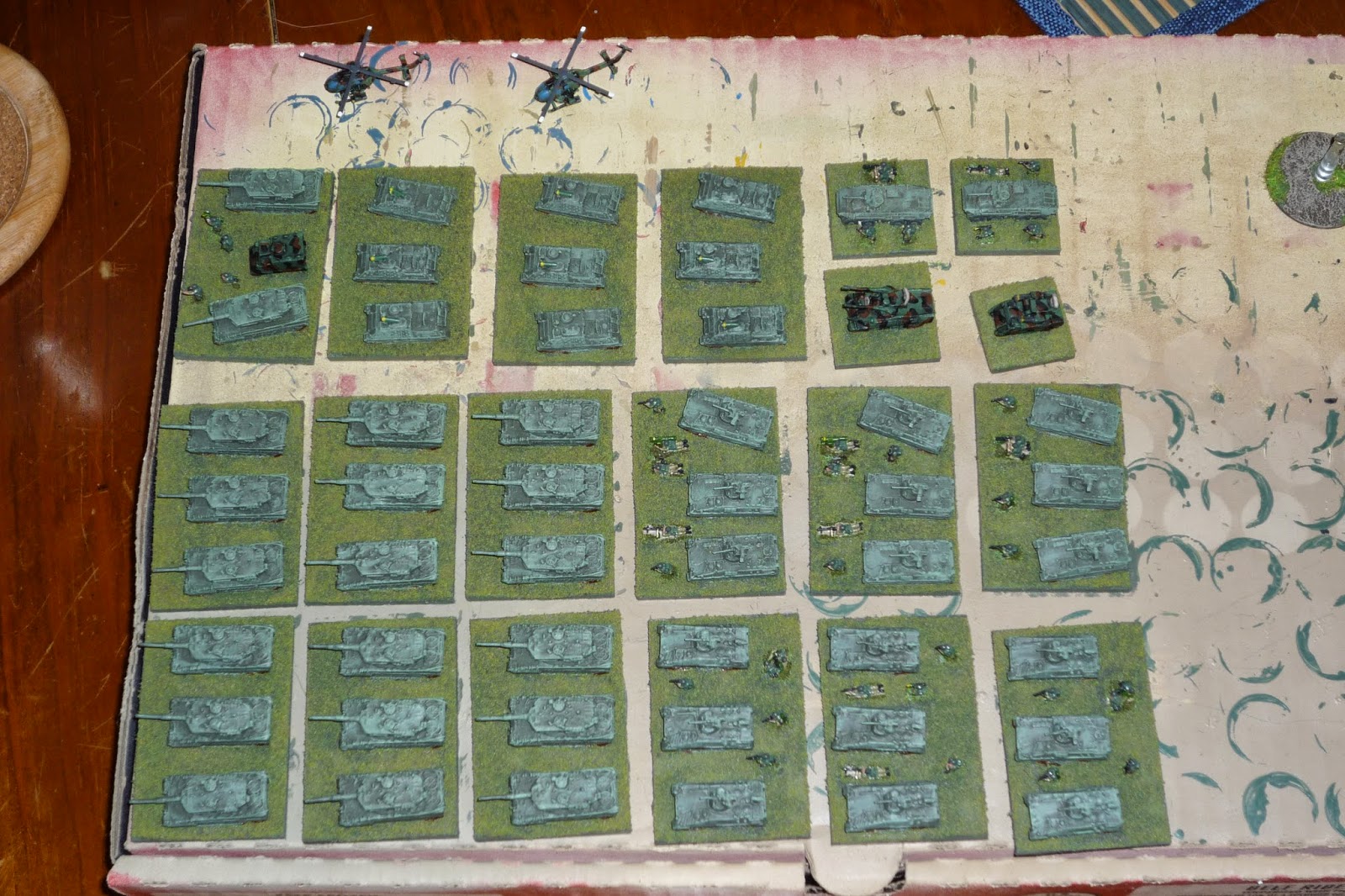 I did not do up engineers or artillery for this brigade, they will 'share' from other forces (that I haven't finished yet, though I suppose the Canadians I've finished could stand in in a pinch). 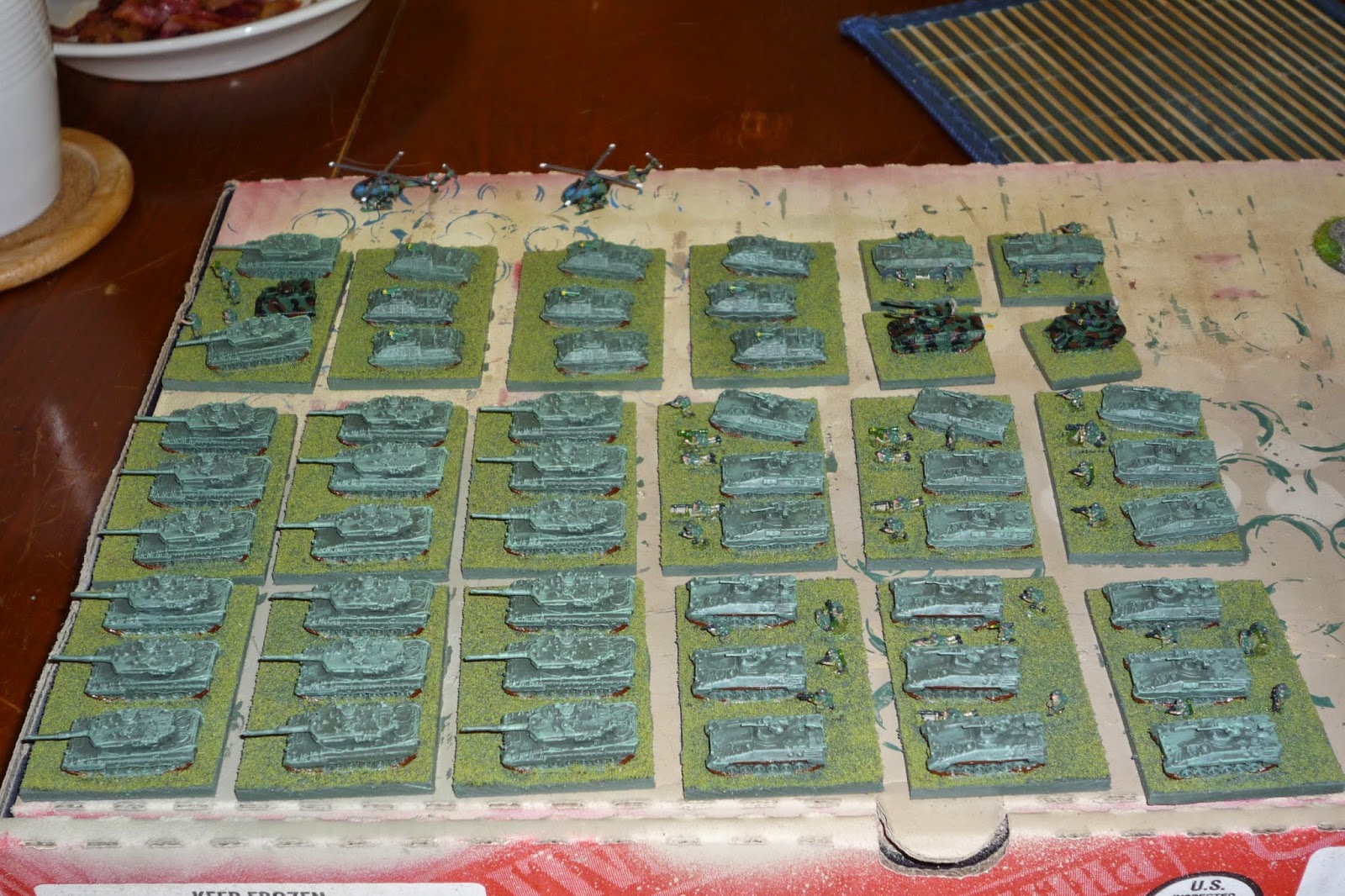 Another look at the entire force.  The tank battalions are Leopard IIs, the mech infantry ride in Marders, the SP ATGMs are Jaguars, the Recce are in Luchs, and the helos are BO-105s. 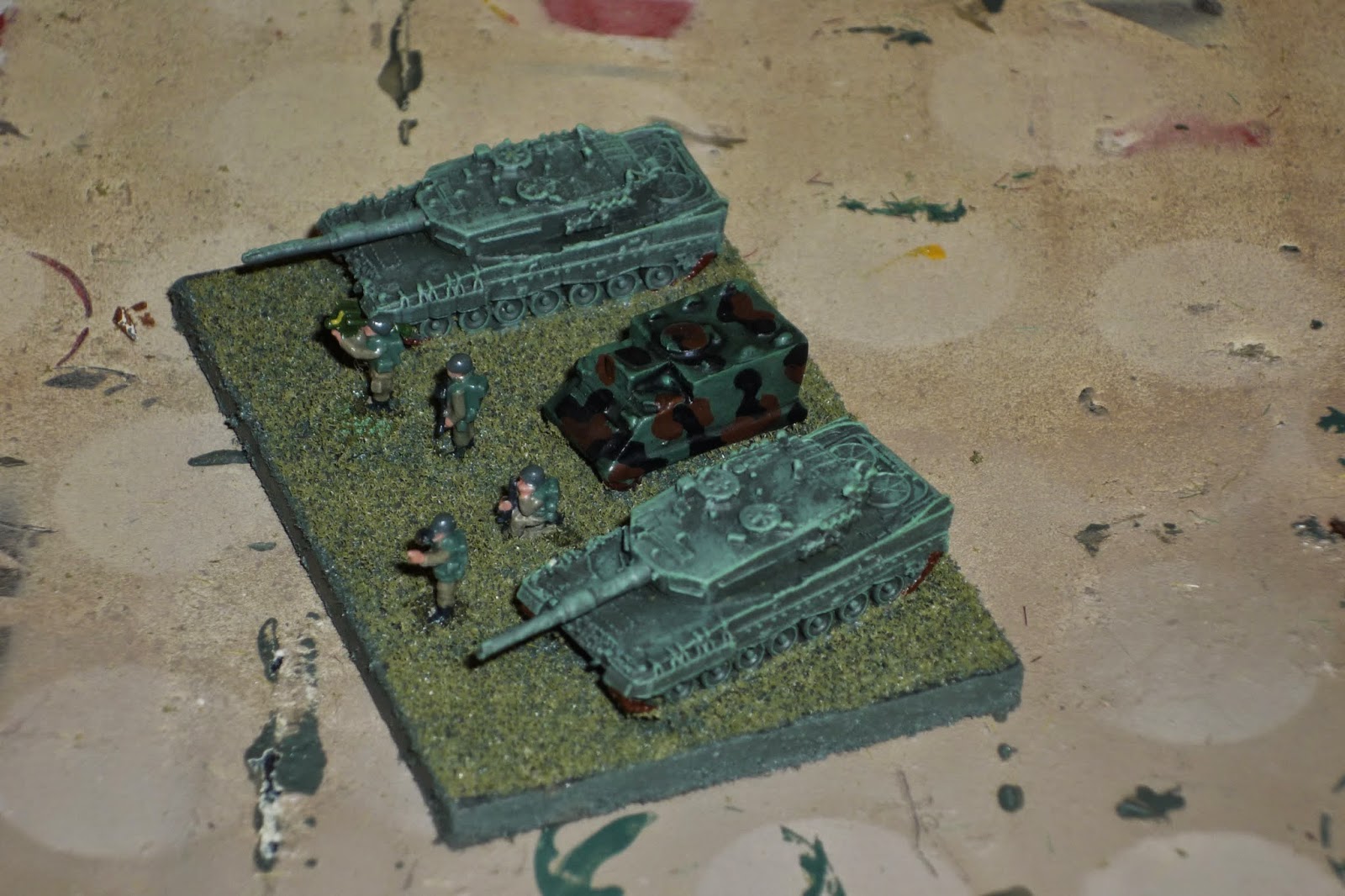 The command stand, sporting two Leopards and the NATO 3-tone M-577 command track, along with some infantry, one sporting a Stinger SAM. 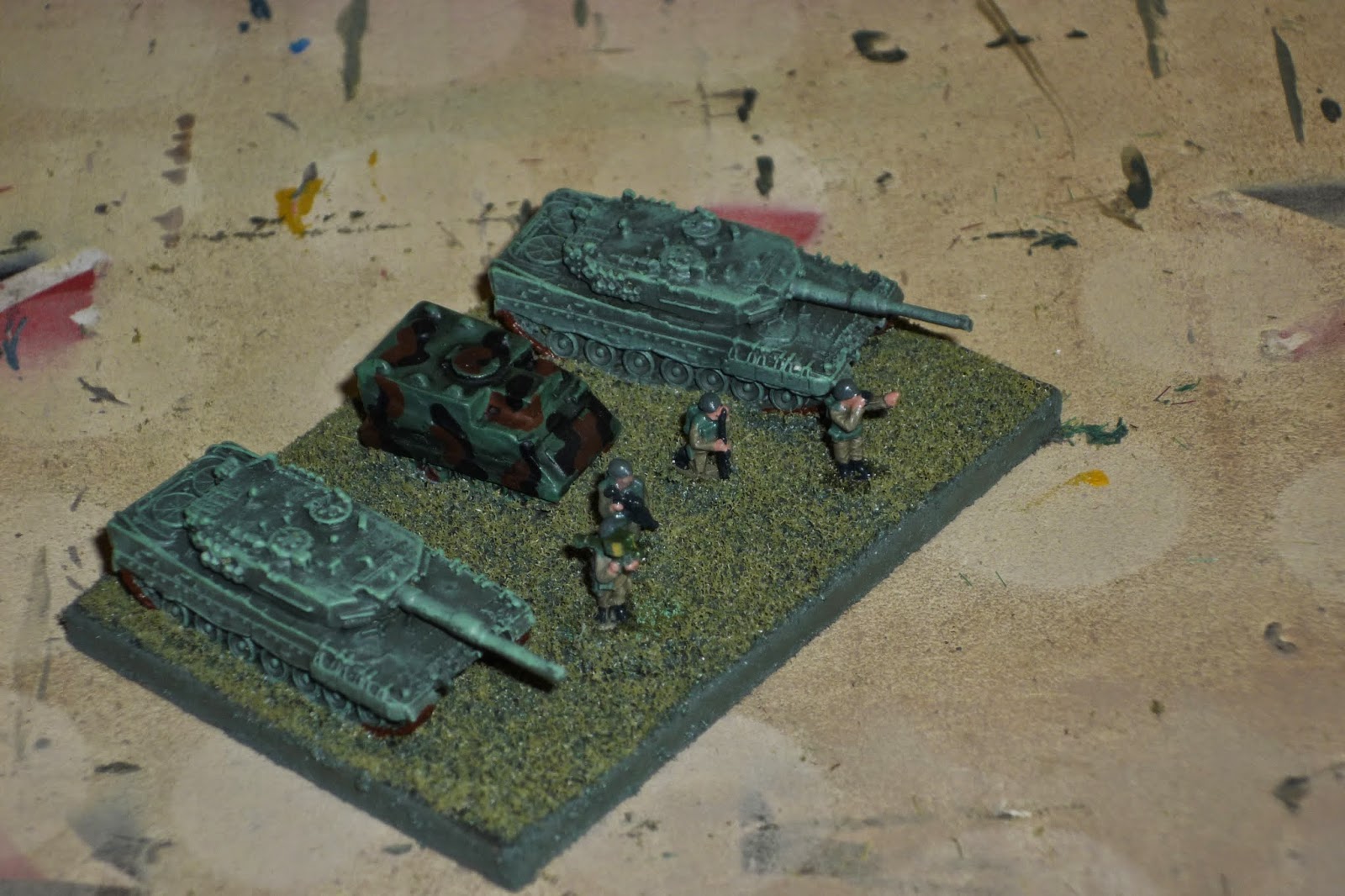 Another look at the command stand. 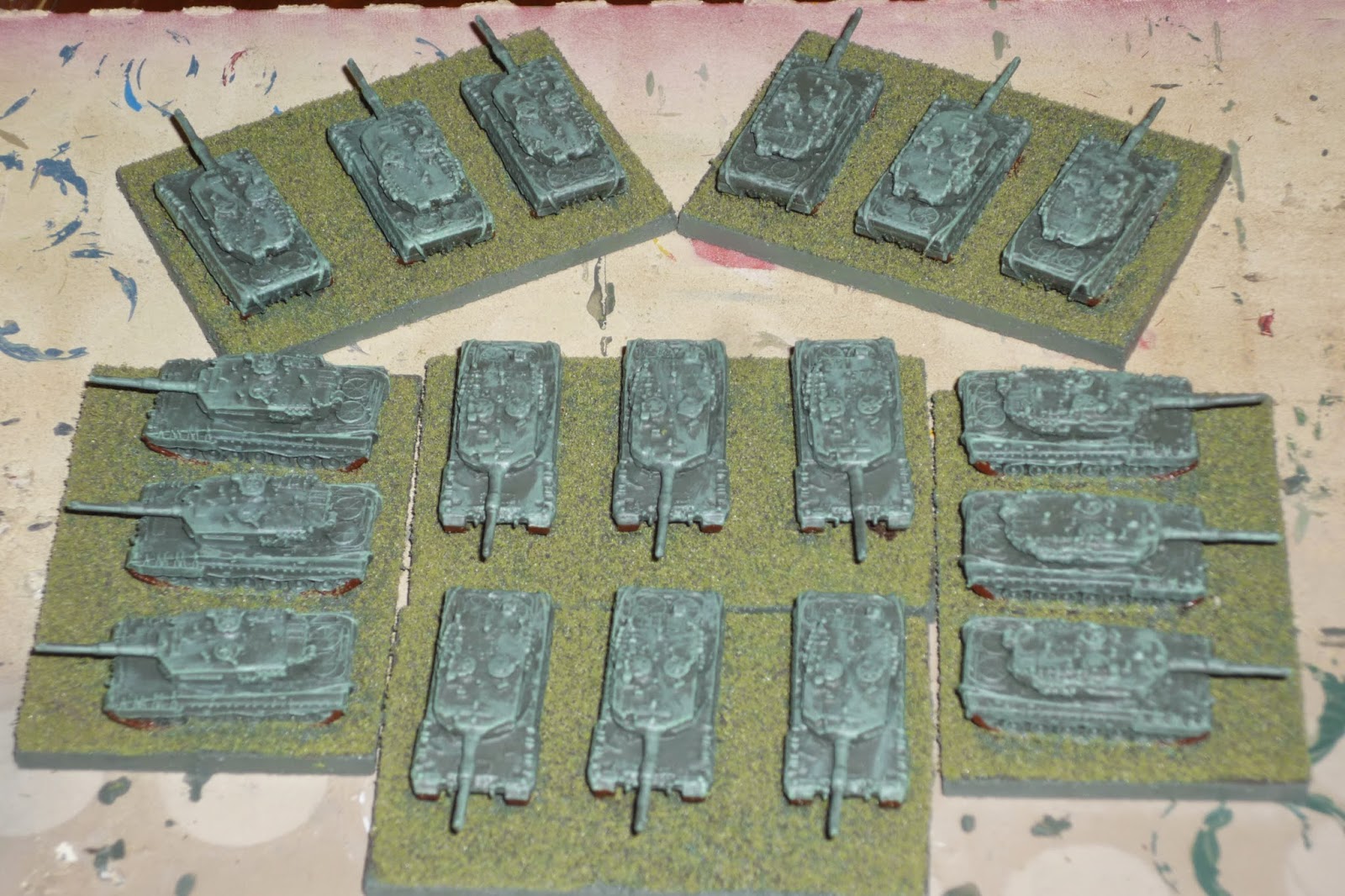 The entire tank force, two battalions of three companies each. 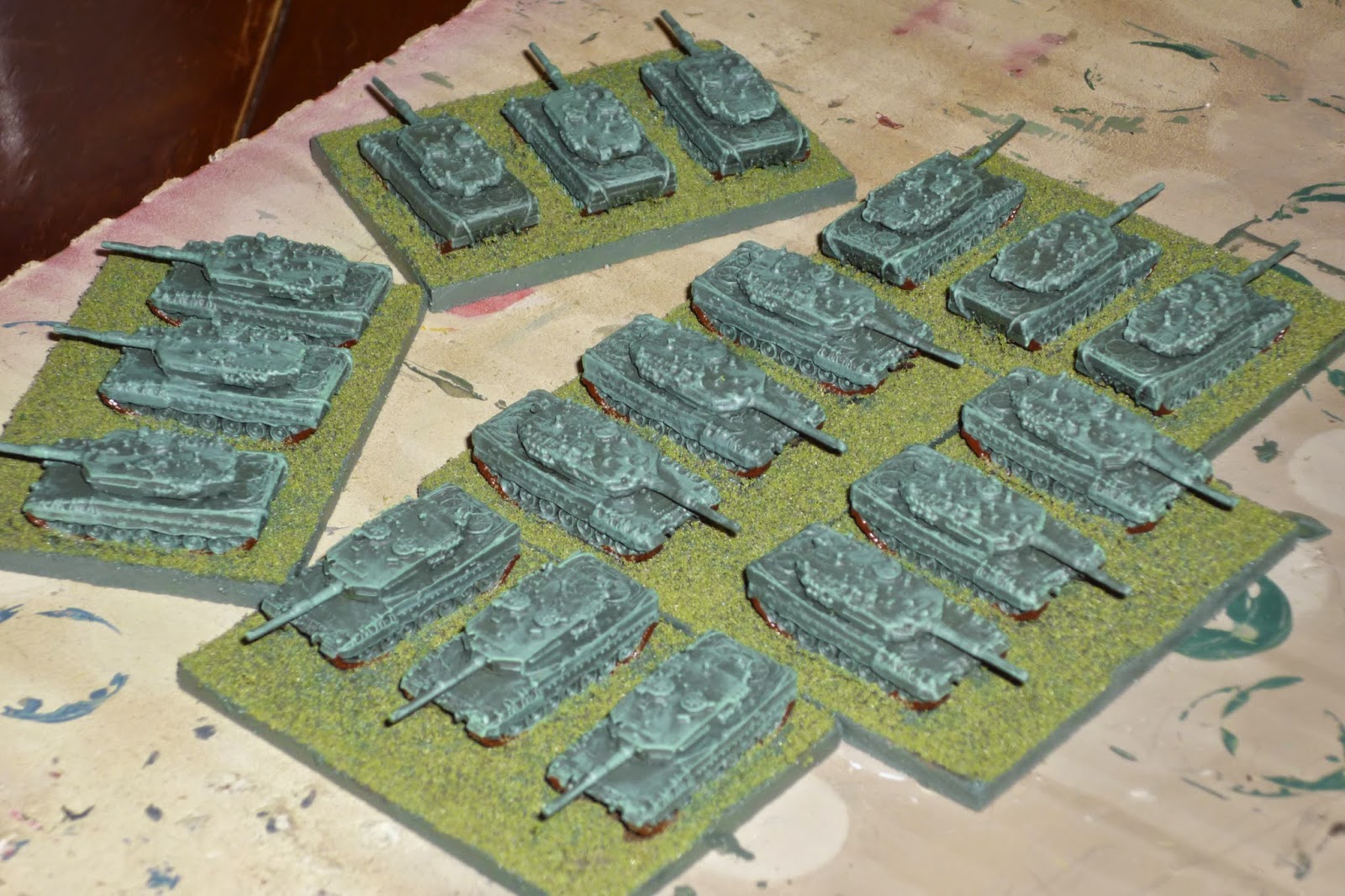 Another look at 'ze panzers.'  Pretty mean looking, if you ask me. 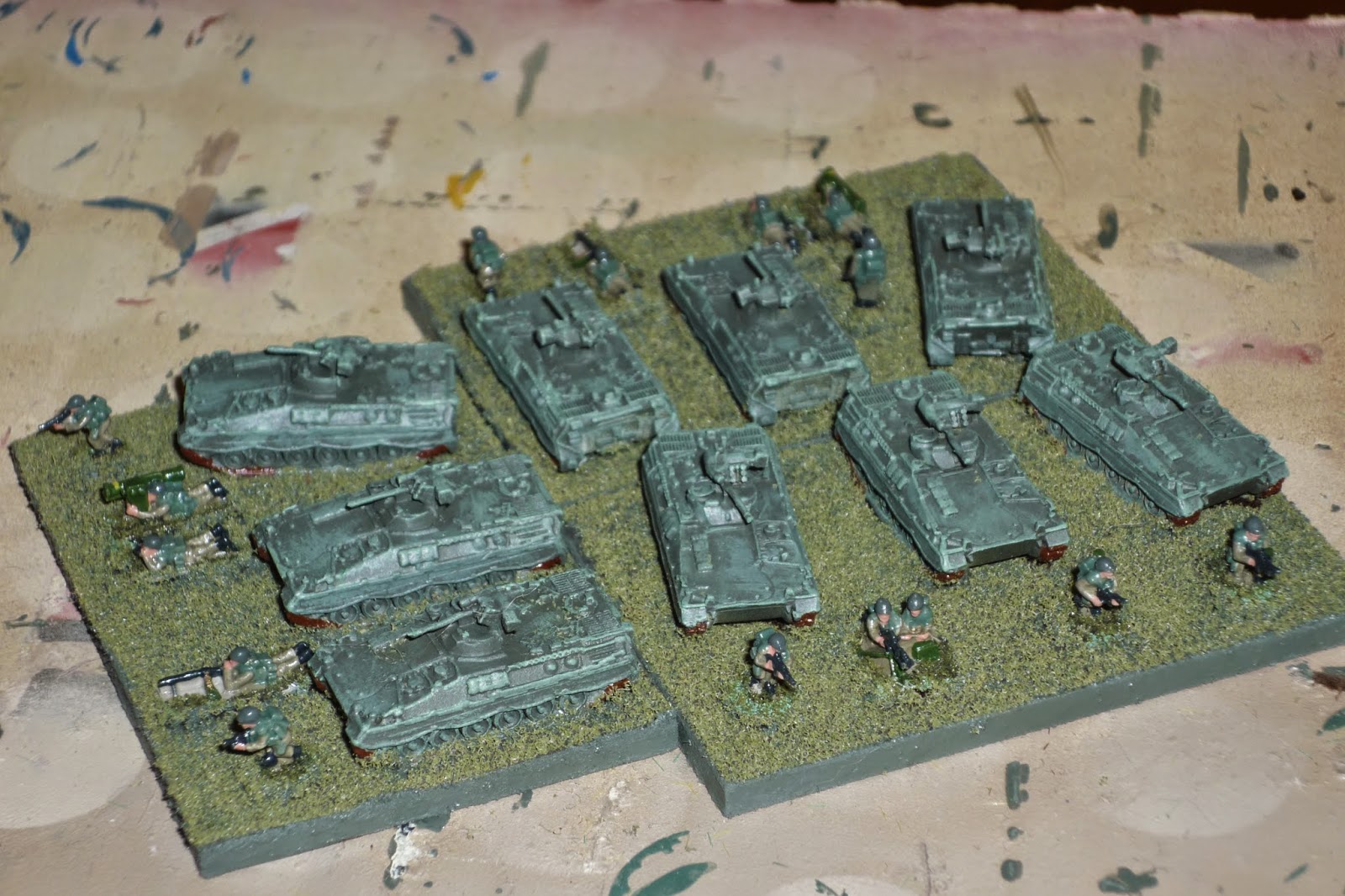 The first battalion of mech infantry, in Marder IFVs. 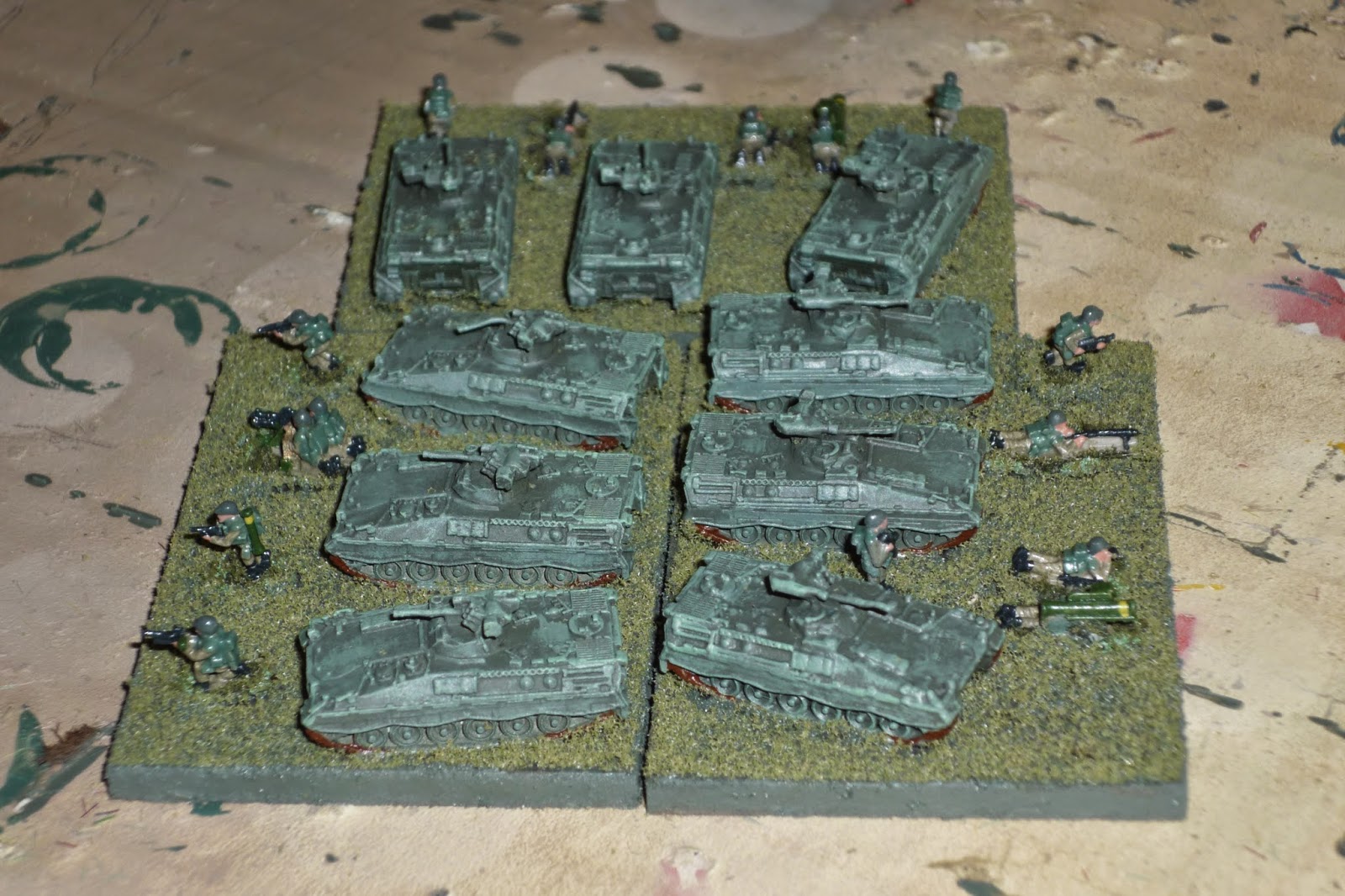 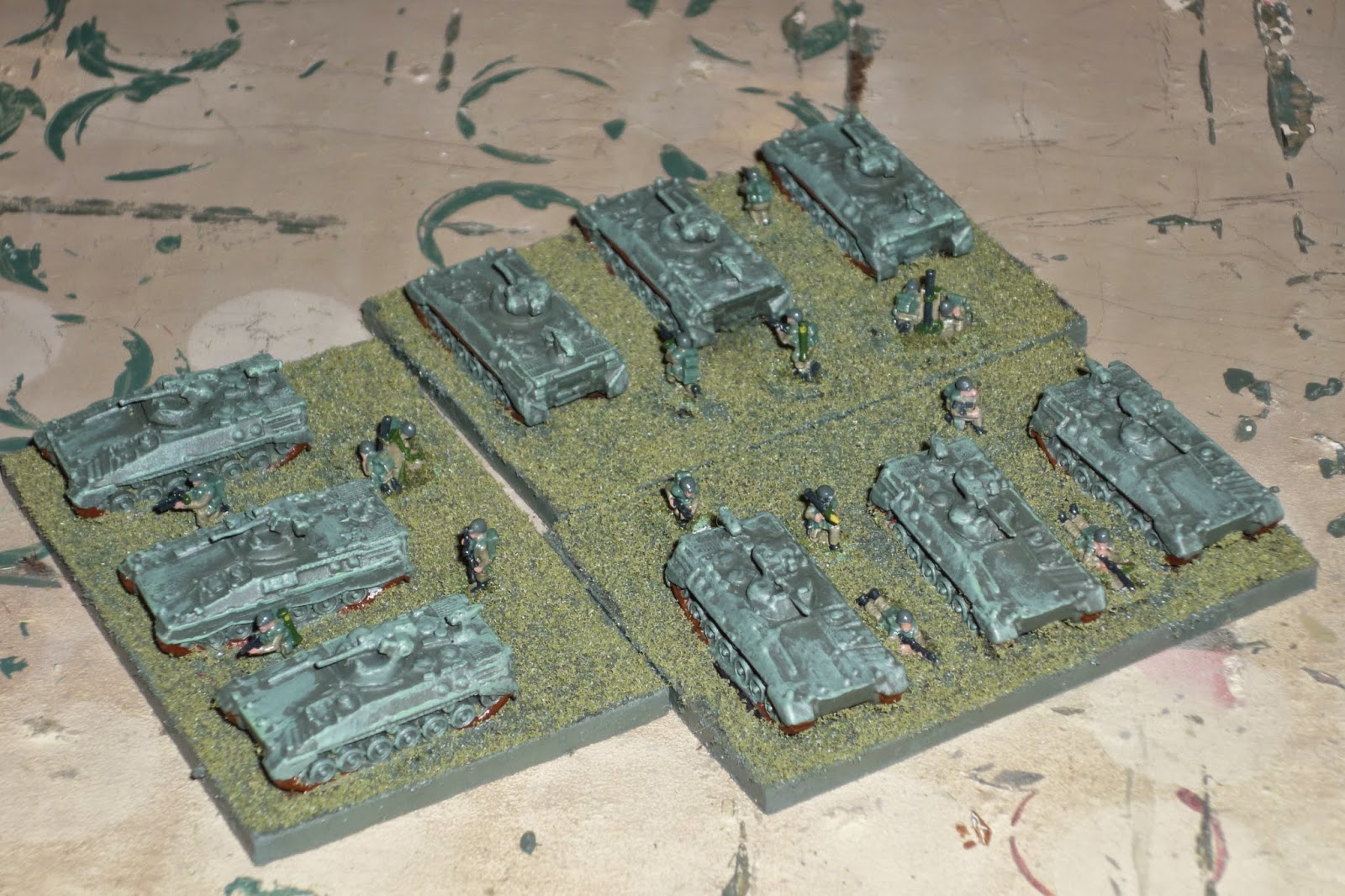 The other mech infantry battalion, also in Marders, but in an older variant.

The plan is for much cross-attaching of companies, to form 'tank-heavy' and 'mech heavy' battalion-level battle groups, with the Jaguars attached out by company to the battalion battle groups. 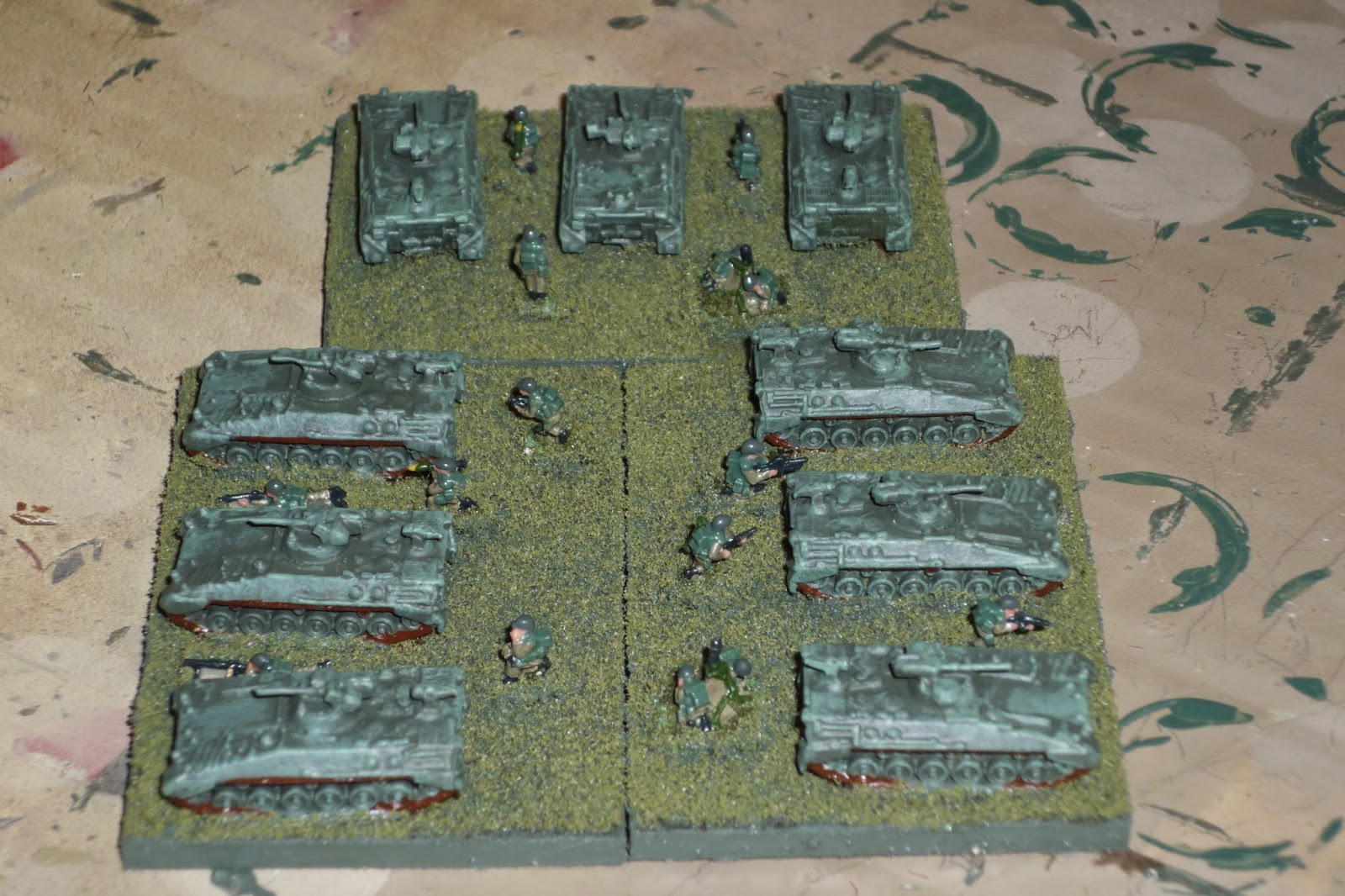 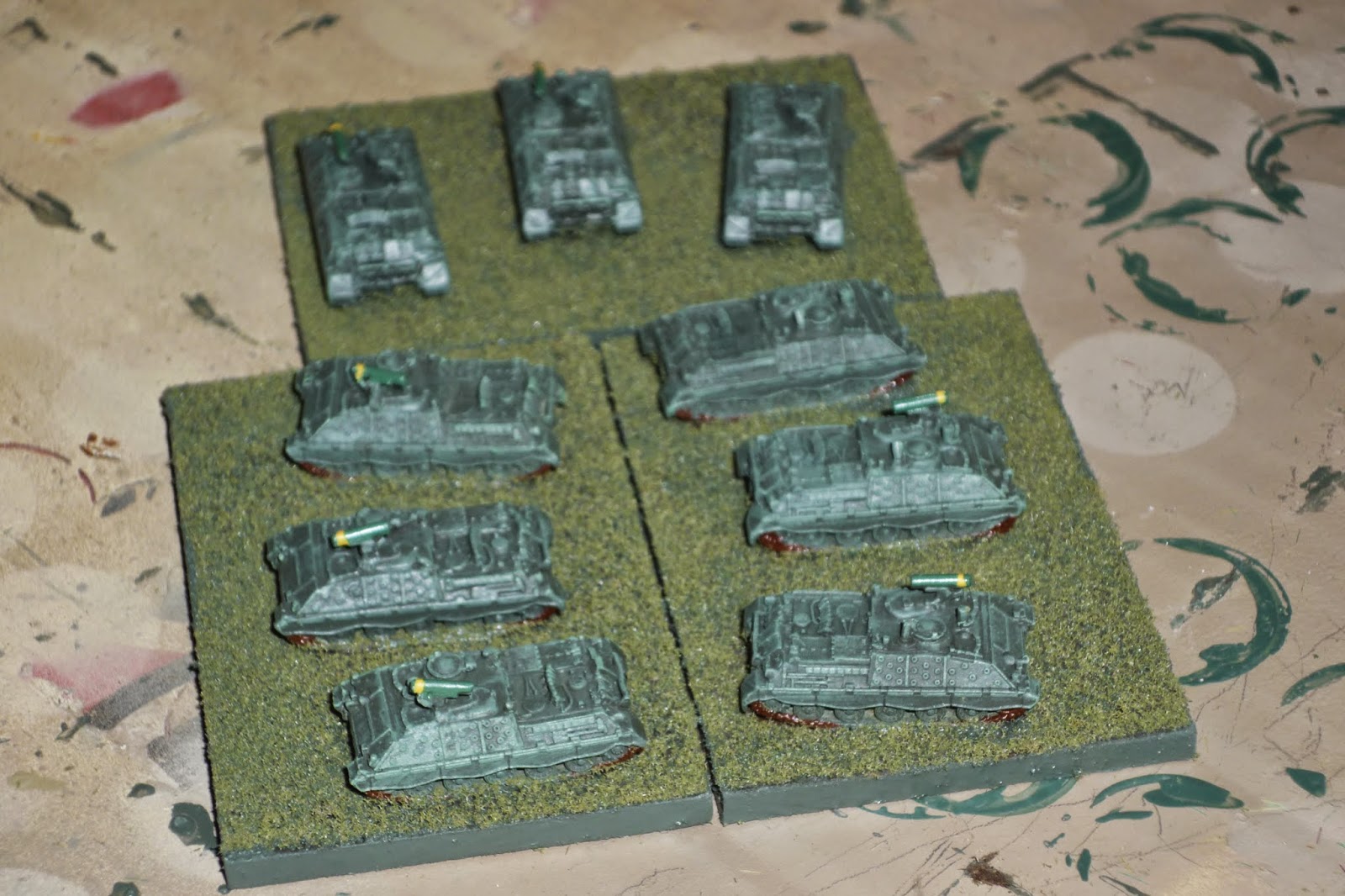 The Jaguars.  Well, lazy strikes again.  As I've mentioned previously, these were all bought second-hand, and so you end up with missing gear.  In this case, two of the Jaguars were missing their missile launchers.  I suppose I should have ordered spare parts from GHQ, or scratch built new launchers, but, I'm lazy... 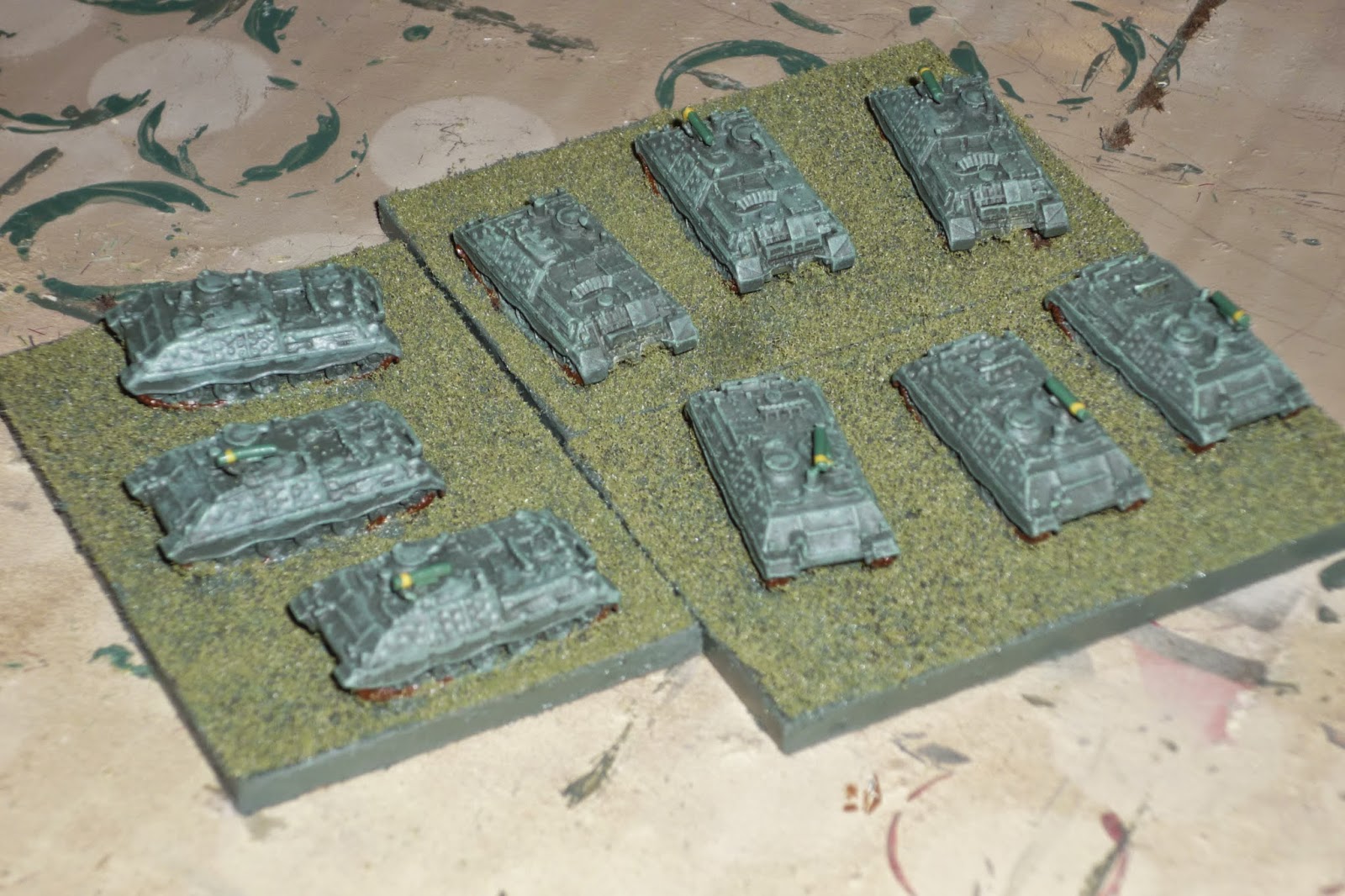 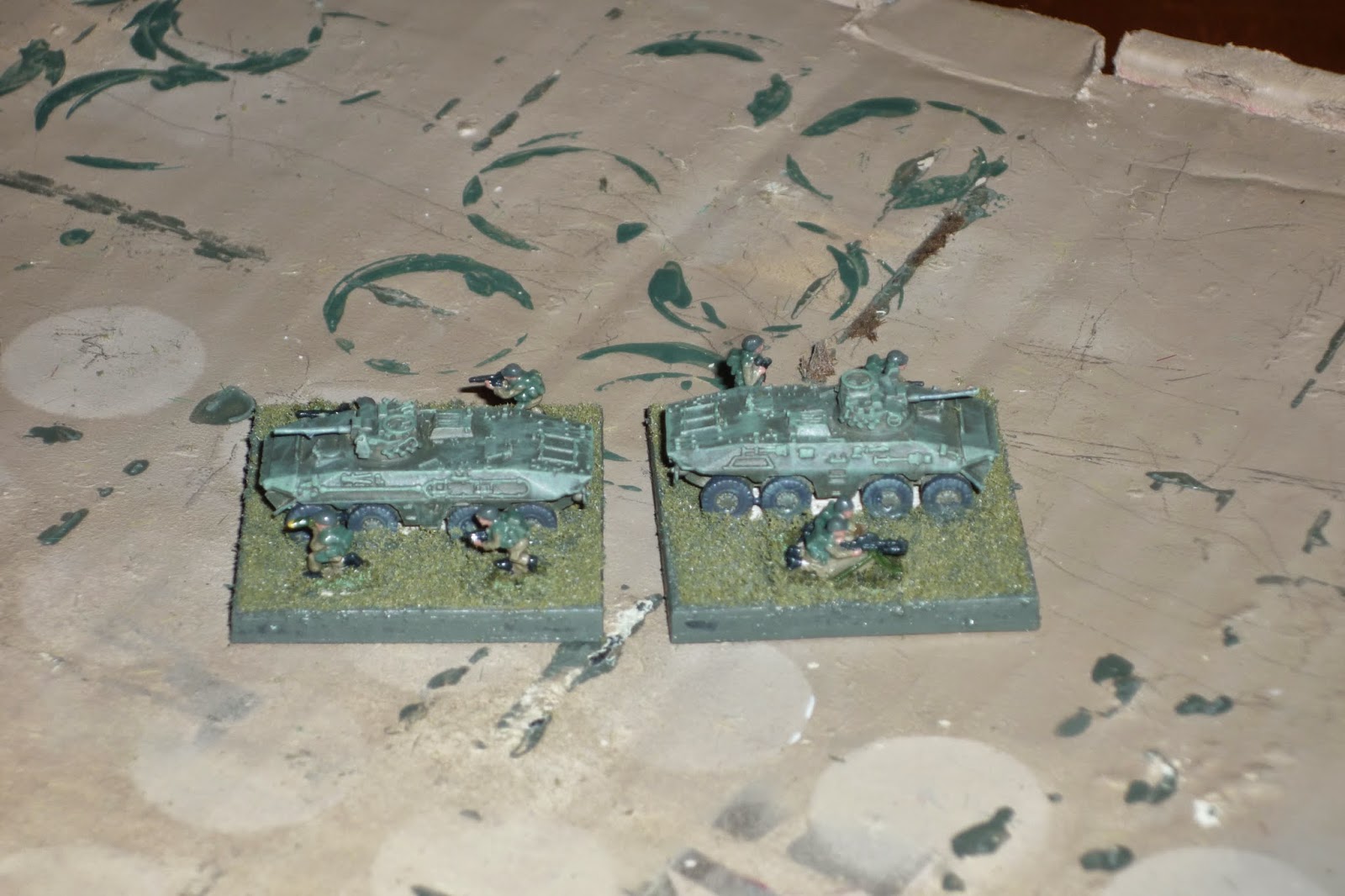 The Recce stands.  Good Lord those Luchs are huge!  The infantry I used are actually historically incorrect, too.  I used GHQs Modern German infantry, which use mostly G36s, when the service rifle in the 80s was, of course, the G3.  But the figures are really well sculpted, and I love the poses. 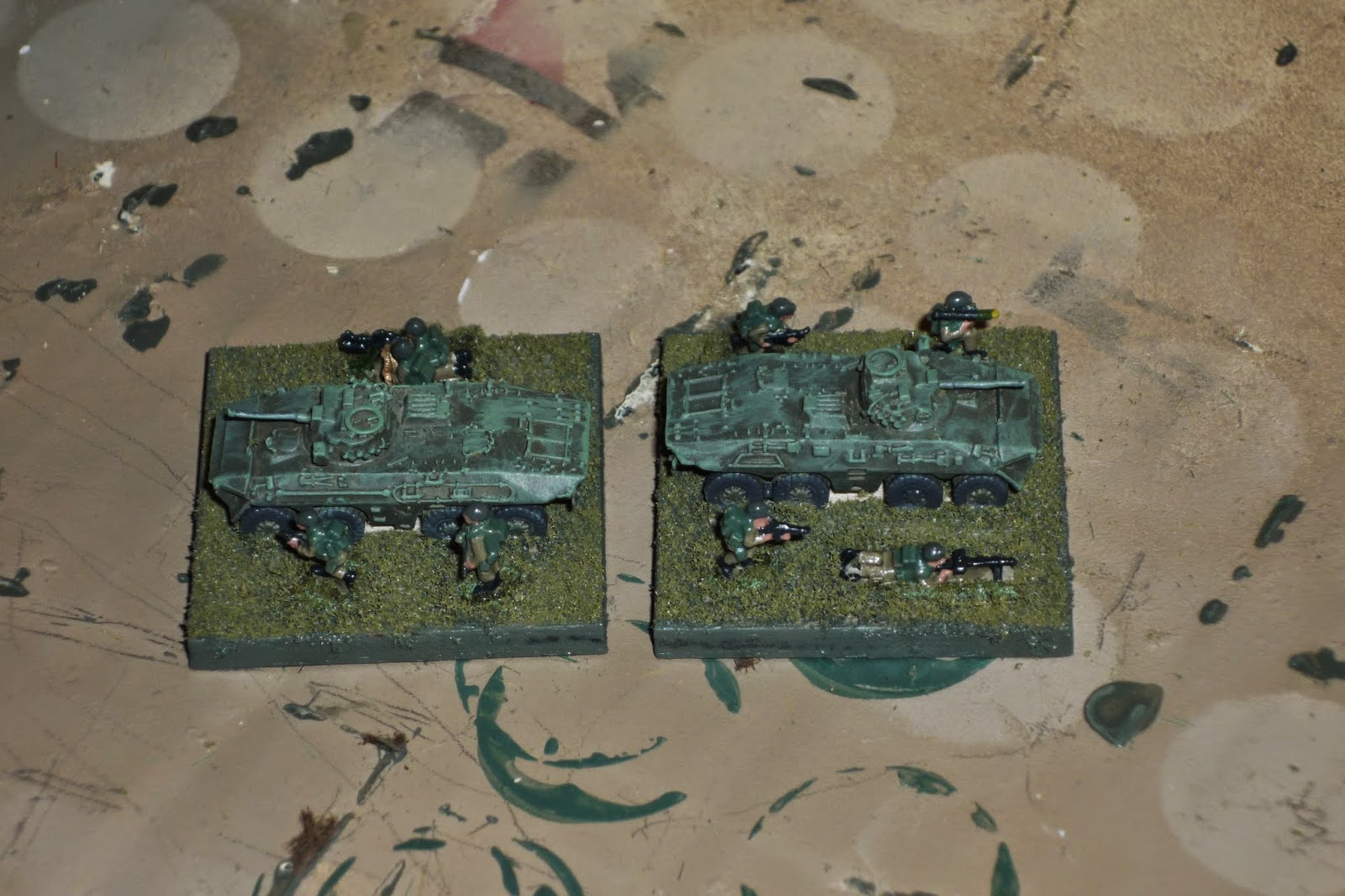 Again with the Recce. 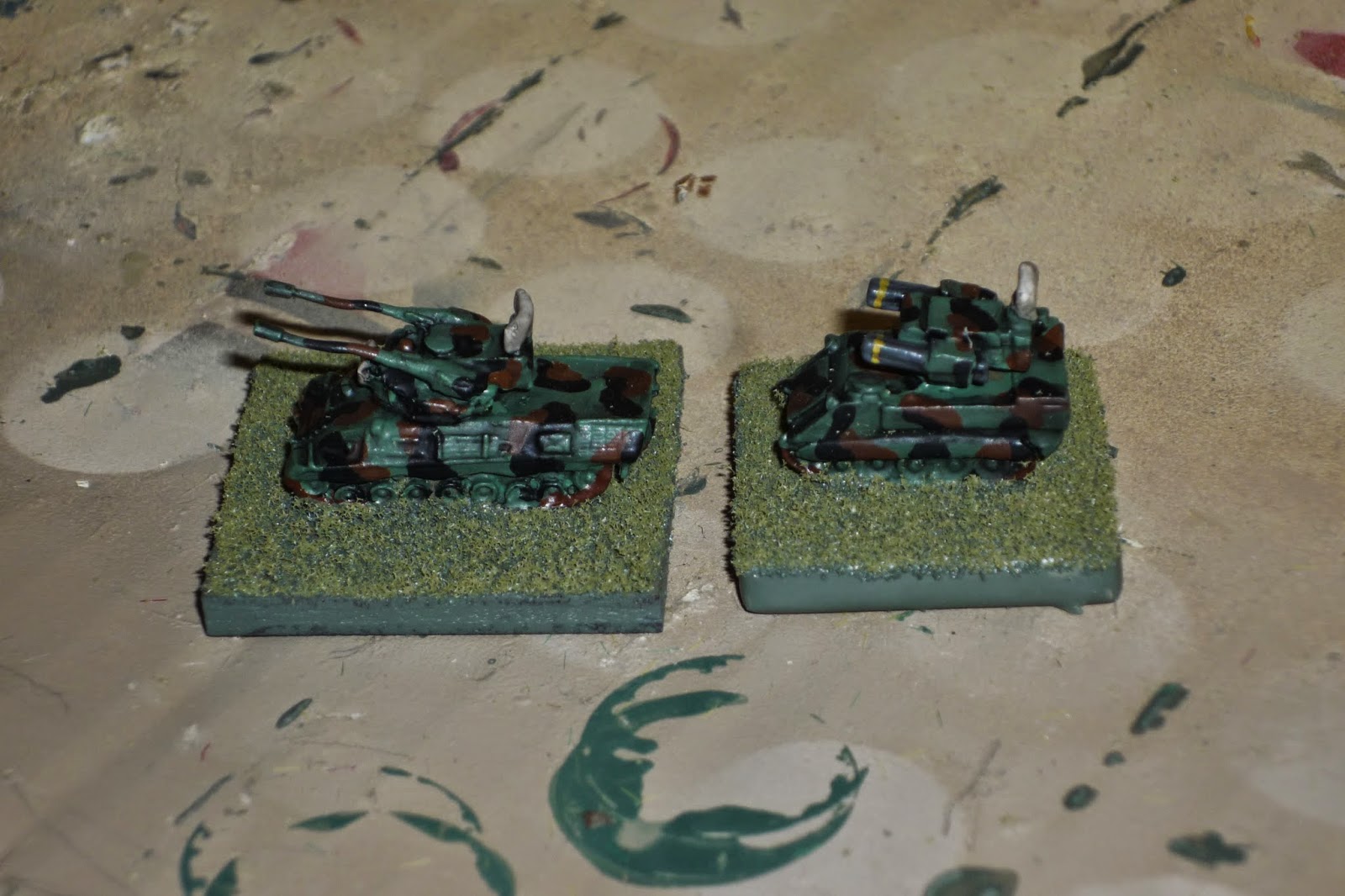 The air defense units, a Marder SP anti-aircraft gun, and an ADATs, which, in real life, should be a Roland SAM on a Marder chassis.  But, I don't have Rolands, and have plenty of ADATs, so there you go. 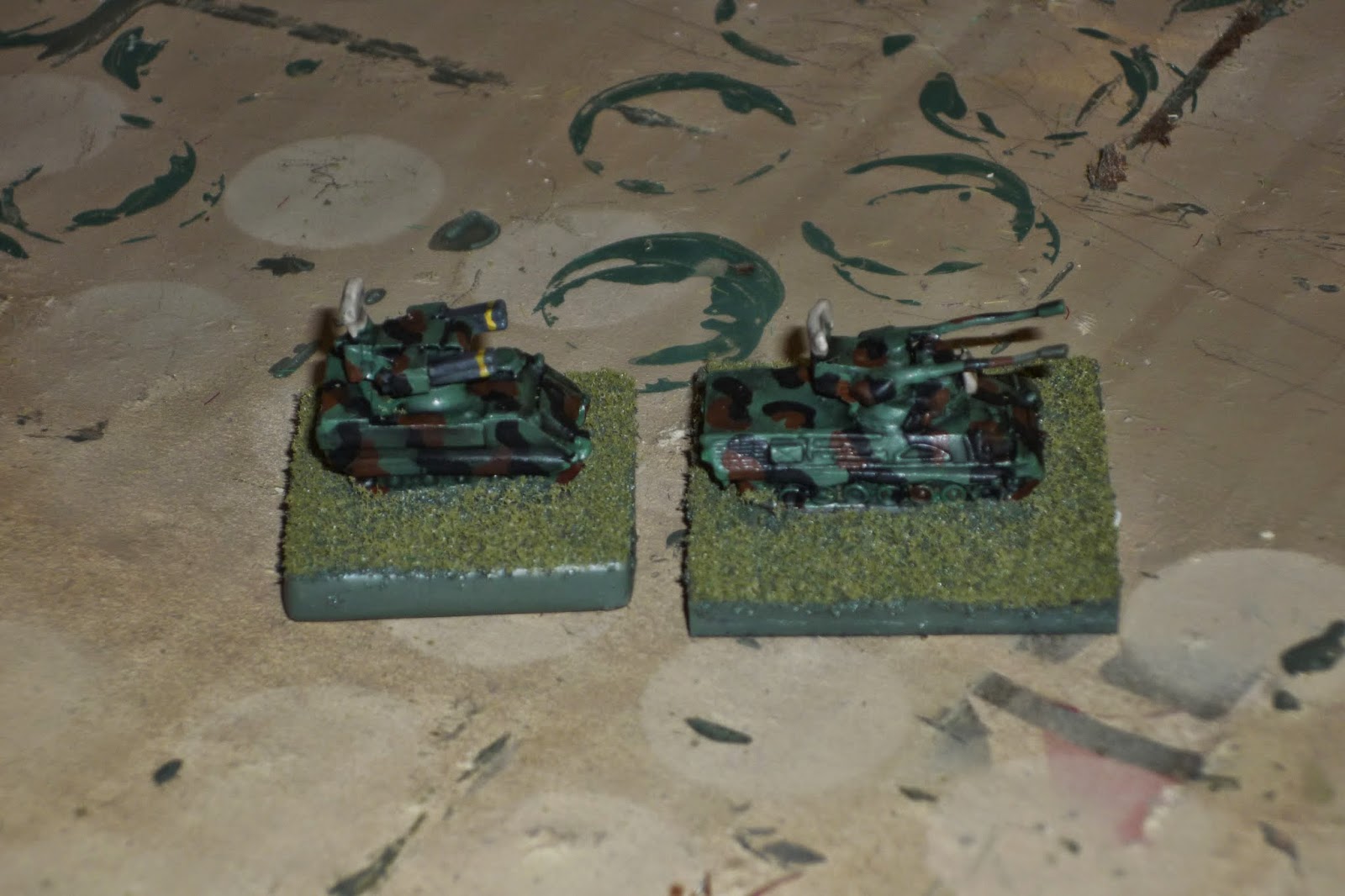 These pics really such; the camo actually looks really good on the table, much more subtle, nowhere near as garish as the flash is making them look.  And they actually don't stand out from the green-gray vehicles as much as they do here, either... 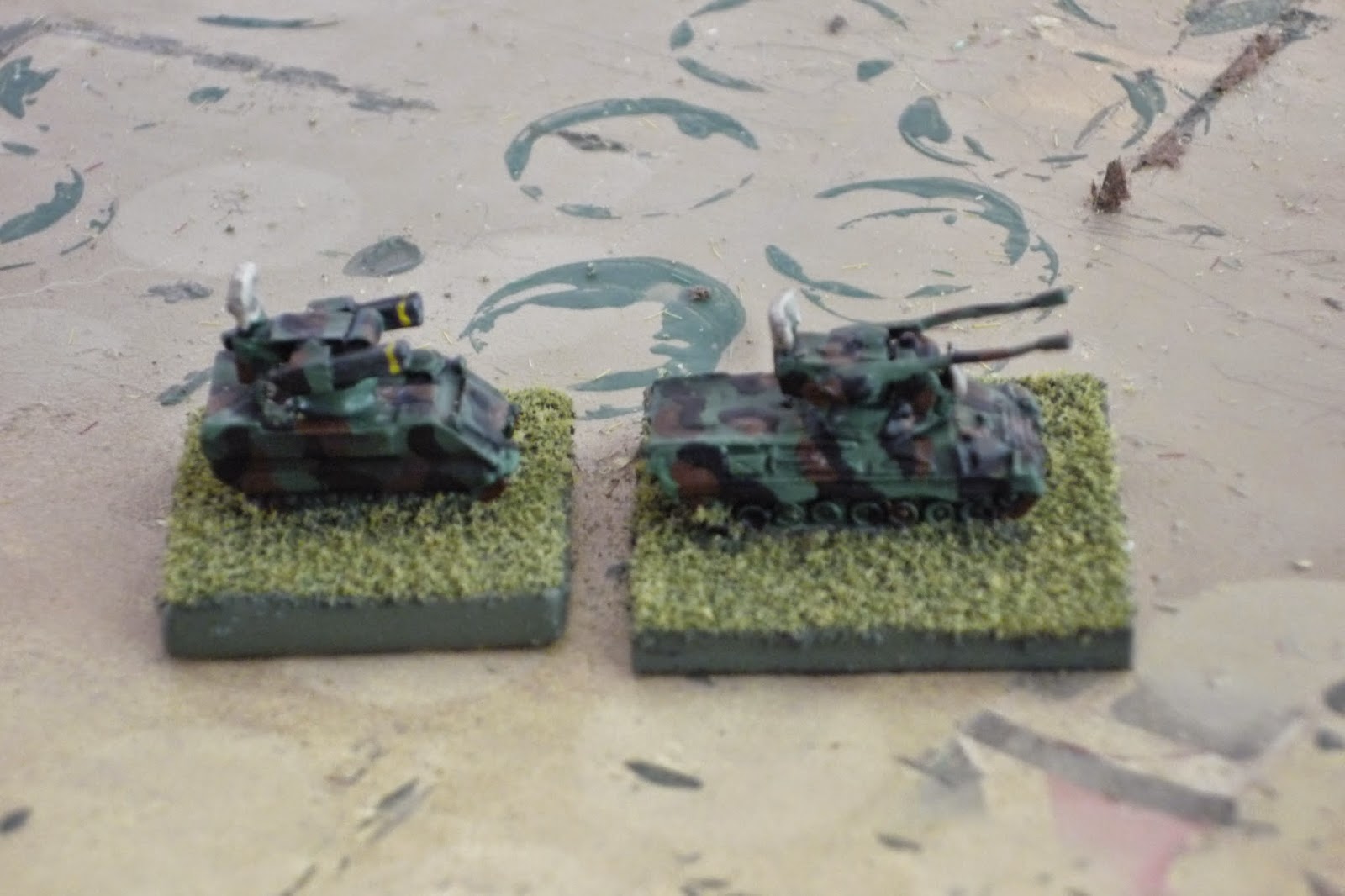 Here's a look without the flash.  I'm actually really happy with the NATO 3-tone, but I'm sure as hell not gonna do that on the whole force (I don't have that kind of time).  I do really wish I could straighten those Gepard barrels out, though...

Oh, and this reminds me: new 5Core BC forces are on hold until I get more bases from Litko.  As you can see above, I ran out of the 30mm squares and had to go back to my old bathroom tiles, which are considerably smaller.  I'm telling myself that I'll go back and re-base the ADATs once the Litko bases come in, but this is ME we're talking about. 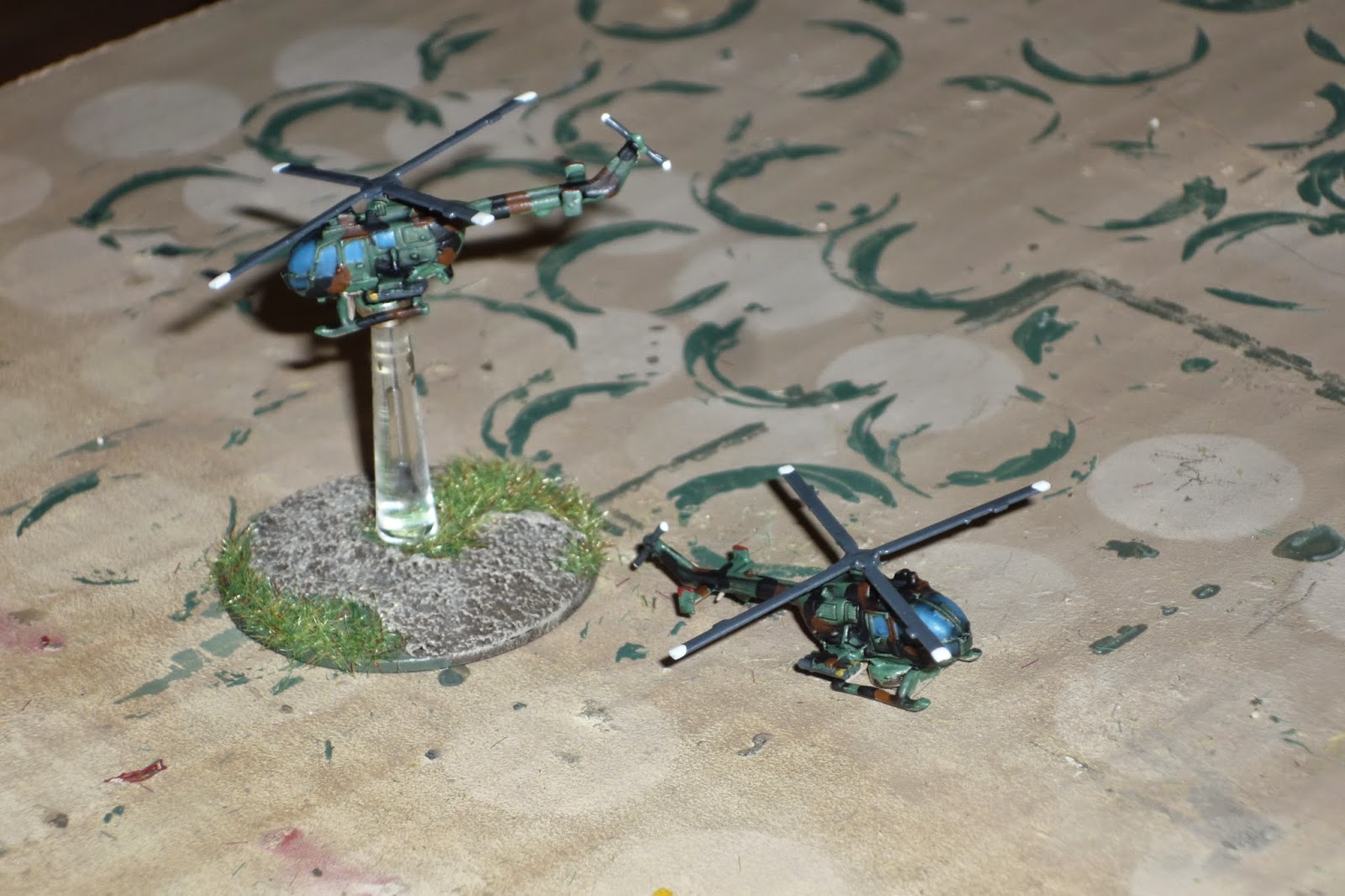 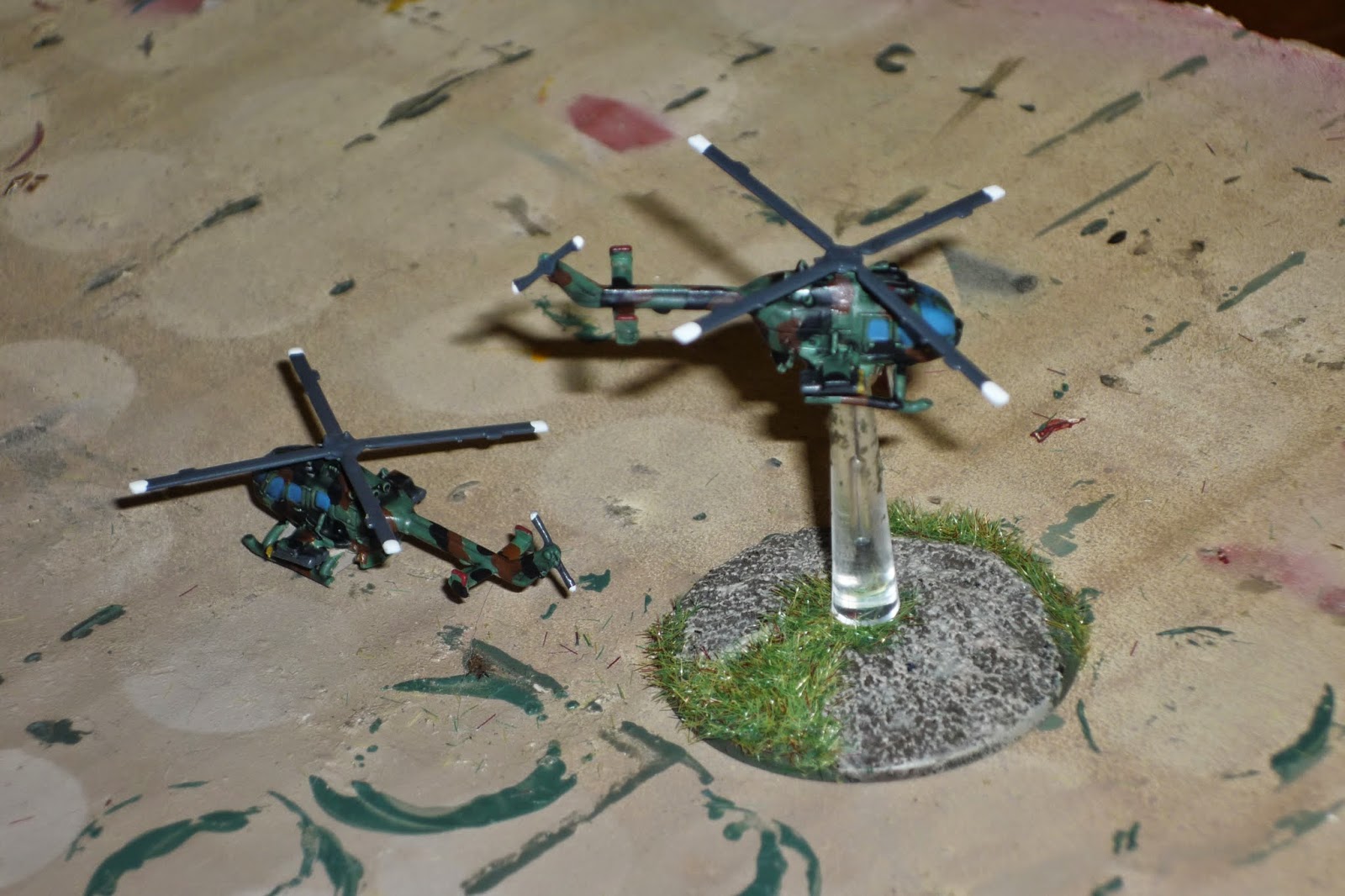 Well, as you can probably guess by the fact I'm posting photos of units I completed (meaning I painted instead of played), I am still yet to get 5Core Brigade Commander on the table...  But I did get in a monster game of “Generic Yet Action-Packed, WWI through Modern, Dogfighting Like Top Gun Rules” (GYAPWW1TMDLTGR), AKA, the dogfighting rules I've been playtesting. I'll look to get it written up and posted this week, but bear with me, it's massive (four hours, 109 photos).