All,
So, it has been decided.  I am moving ahead with a Platoon Forward campaign.  I will label it "All American," and it will center on an airborne rifle platoon from 1943 to 1945 in the Mediterranean and Northwest European theaters.  This will be done in 10mm with individually based figures (from Pendraken), using the modified KR-16 rules, and played solo in the context of Joe Legan's excellent "Platoon Forward" solo campaign system for troop and scenario development.
Here's the boys: 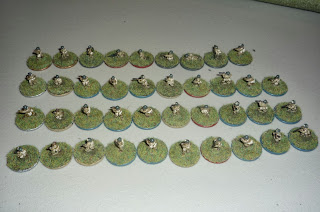 Here is the whole platoon, 39 red-blooded American boys looking to throw the Nazis out and come home to Sweet Suzy Rottencrotch.  I am dealing with a dilemma though.  I have a Platoon Commander, a Platoon Sergeant, a radio man, a two-man MMG team, a two-man 60mm mortar team, and a two-man bazooka team, and three 10-man rifle squads.    My dilemma is whether to have the platoon as a PC, Plt Sgt, RTO, and 3 squads, with the MMG, mortar, and bazooka as company-level support that may or may not be attached (this would probably work better in Plt Fwd), or as I built them: a 39-man platoon (this gives me zero support options in Plt Fwd outside of vehicles).
I want to do the latter, but should probably do the former.  My biggest concern is running into a tank and not having a bazooka, so maybe I'll do the former but with a bazooka as part of the HQ element.  I think that's probably the way to go. 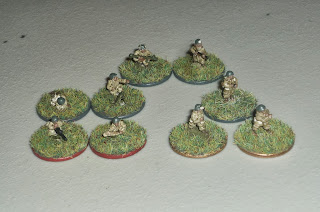 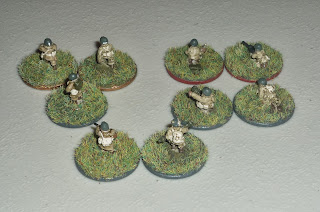 Same group from rear.  PC has vertical stripe, Plt Sgt has horizontal stripe.  Neither figure is carrying a weapon, but both will be handled as carrying an M-1 carbine. 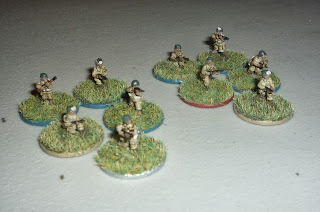 1st Squad, with Squad Leader with rifle team on left, and Assistant Squad Leader and BAR team on the right.  Both teams are a mix of Thompsons, M-1 Garands, and M-1 Carbines (plus the BAR in the BAR team). 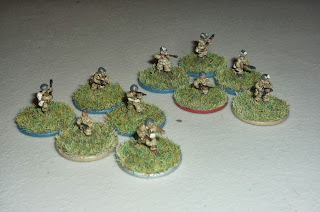 2nd Squad, same way.  I should mention that the majority of the figures are from Pendraken's US Airborne D-Day range, but I did use some guys from the US Airborne Ardennes range as well.  I painted them all the same, but if you look closely you'll see a few greatcoats.  Okay, I shouldn't have done it, but the D-Day range doesn't have any BARs or carbines, plus I wanted as many different poses as possible.  You'll also see two different 'Mohawks' from the D-Day Pathfinders pack. 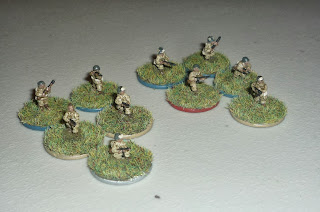